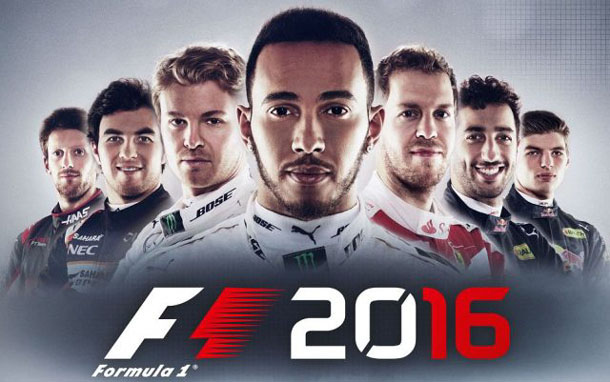 Captures the exhaustive white-knuckle essence of Formula 1 better than any before it.

Formula 1 drivers are some of the highest paid athletes in the world, and for good reason as Formula 1 is one of the most dangerous sports known to man.  Talladega Nights’ crepe-eating Frenchman Jean Girard might have left NASCAR fans chuckling, but weaving around highly-technical road courses in open-wheeled carts at speeds well in excess of 200mph, wheel-to-wheel with your opponent, in any and all weather conditions – Formula 1 is not for the faint of heart.

Formula 1 drivers thread the needle for hours in little more than a plastic kayak on wheels fitted with an engine capable of going from 0 to 200 in a matter of seconds and brakes capable of bringing them back down to a crawl even quicker.  The rules are strict, the expense is astronomical, and drivers battle weekly in environmental conditions that range from sweltering heat to blinding rain over various time zones across the planet.

Codemasters newest release in the Formula 1 arena, F1 2016 captures the exhaustive white-knuckle essence of Formula 1 better than any Formula 1 game that has come before it, with a game that will keep fervent Formula 1 fans glued to their couches for many weeks to come. 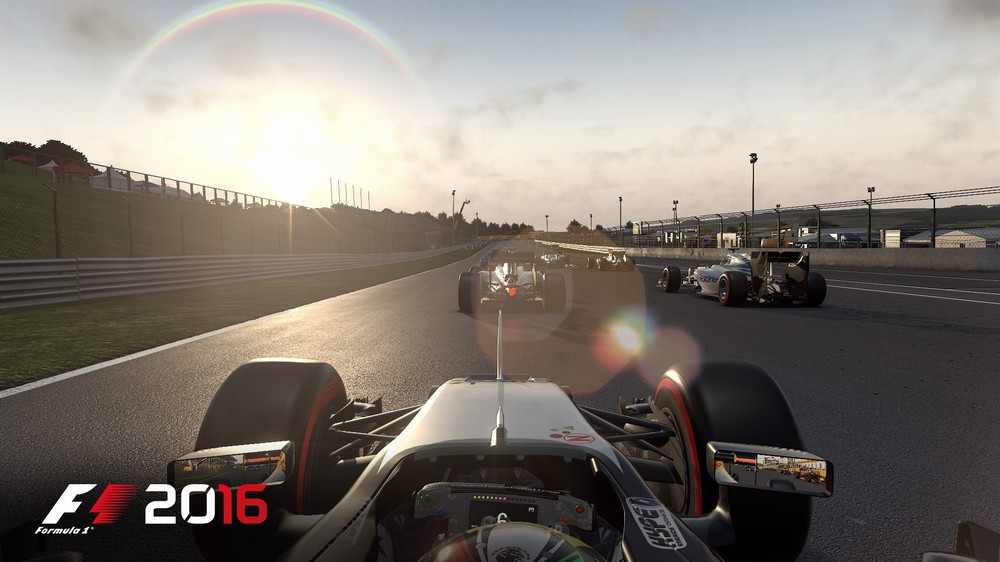 Codemasters is not new the racing arena – having begun in the late 1980’s with a string of 8-bit arcade titles for Atari and Commodore, Codemasters really came into the racing forefront beginning in 1997 with TOCA Touring Car Challenge, Colin McRae Rally (later Dirt), Pro Race Driver (later Grid).  When Sony gave up the Formula 1 exclusivity in 2009, Codemasters released their own F1 franchise.  With all those years under Codemasters developers’ collective belts, there is no surprise that the presentation and racing mechanics in F1 2016 is flawless.

The attention to detail is astonishing – from the turn-for-turn realism of every one of the 21 tracks including the new Baku circuit in Azerbaijan, to the recognizable character models of each of the 22 drivers from all 11 teams, F1 2016 puts the gamer right square in the middle of the 2016 Formula 1 season.

The driving is perfectly-tuned, balancing on that sharp razor’s edge – staying glued to the racing line, or ending up shattered against the barrier – that one would expect from being in a mere 1500lb vehicle equipped with a 1000 horsepower engine.  F1 2016 leaves little room for error, making the practice sessions and track acclimatization challenges all the more important and useful – I will touch on those in a bit. 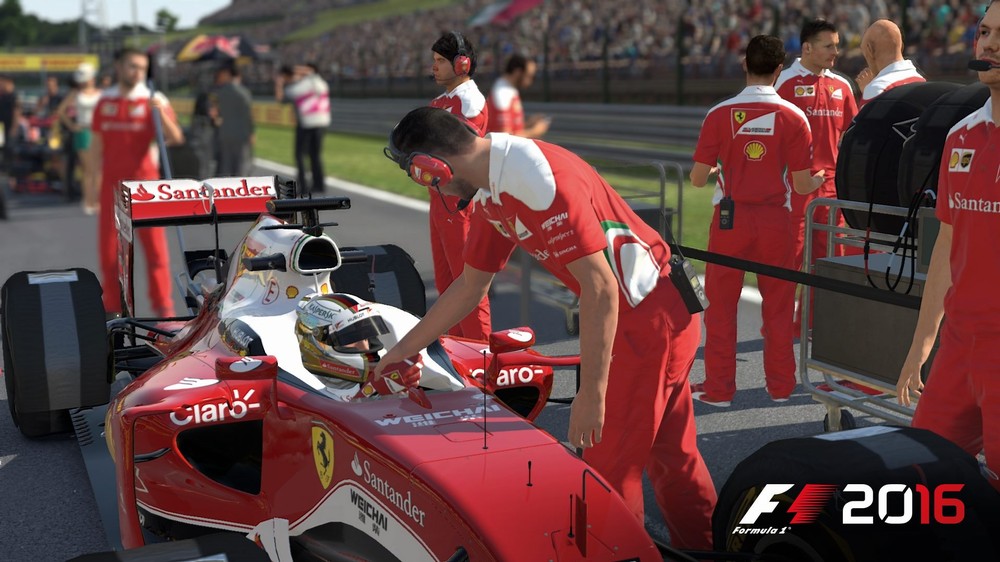 The AI racing opponents are incredibly challenging and intelligent, and while they are prone to some hostility from time to time, but for the most part they tend to race fairly and by the rules.  There are those times when a perfect line will be interrupted by an unexpected rear-ending from one of the AI.  And while initially it might seem unfair or done with malice, upon video replay it is often discovered to have been the result of an unavoidable accident.  Thankfully, like many other Codemasters racers, F1 2016 replay mode allows gamers a limited “flashback” period in which they can (for lack of a better word) ‘retry’ the previous 10 seconds or so of play order to rectify any mistake they may have made.  The ability to replay a segment rather than restart the whole race is common fare in most racing games these days, but it especially helps here given the degree of precision that is required in Formula 1 racing.

Gamers can select to jump into a Quick Race right off the bat, but novices (and even some veterans) may find the learning curve to be a bit overwhelming. Instead, I would strongly suggest starting with the tutorials and then immediately get into one of the two career modes.

For most, the Player Career mode will be the best starting point; it allows gamers to tailor the season to suit their preferences, including the length of the practice, qualifying, and racing sessions, as well as the general environmental criteria (weather, time of day, etc.).  Here the gamer can set 5-lap races that are a bit easier to chew. 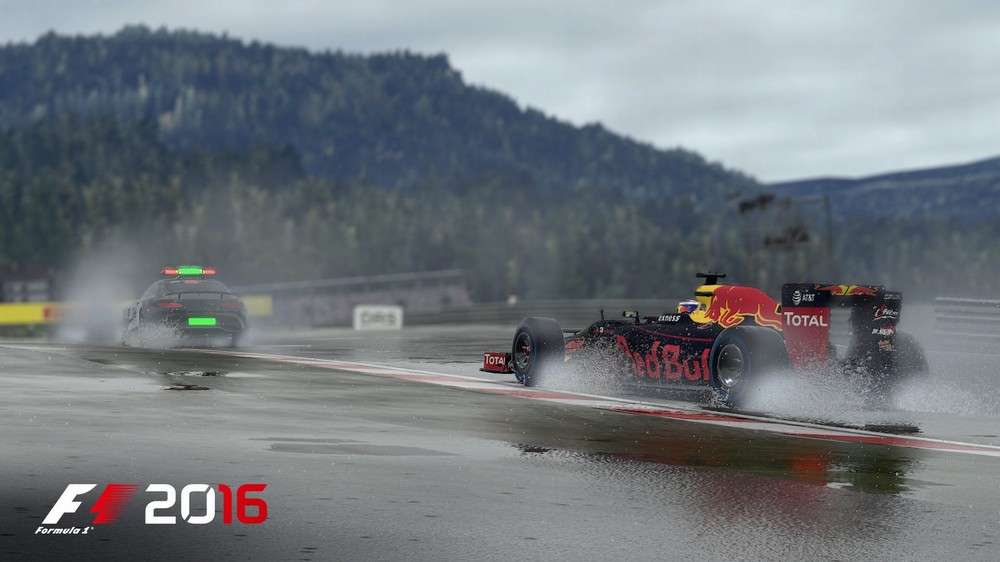 Hardcore racers will eventually want to venture into the Pro Career, which is a full-length lap-for-lap simulation of up to ten seasons.  Whereas the abbreviated Player Career (above) takes a good deal of investment in and of itself, the Pro Career with its three full-time practice sessions, multi-lap qualifying sessions, and the actual full length races, all but qualifies as a  full-time job.

Codemasters Career gameplay modes all largely follow the same premise that was introduced in their seminal franchise Pro Race Driver; the gamer takes on the role of a fledgling driver, trying to work his way up the ranks in the elite world of motorsports.  Between each racing session, the gamer retires to the Hospitality lounge where they receive instruction and information from their assigned Agent (contract reviews, session goals, rivalry information), and the opportunity to interact with the team Engineer to help determine how winnings will be spent toward future vehicle performance R&D.  It may not be the most compelling of dialogue, but at least it breathes some life into the generally staid racing genre.

As with any points-based racing series, it isn’t the win that is most important (although it is really rewarding), it’s is the consistency of finishing races, and scoring cumulative points over the course of a season.  That means it is very important that the gamer knows and understands how to choose the appropriate tires (or tyres) and manage/optimize their wear, how to conserve fuel and/or doctor with the mix to increase horsepower (at the expense of conservation), and overall racing strategy both offensively and defensively. 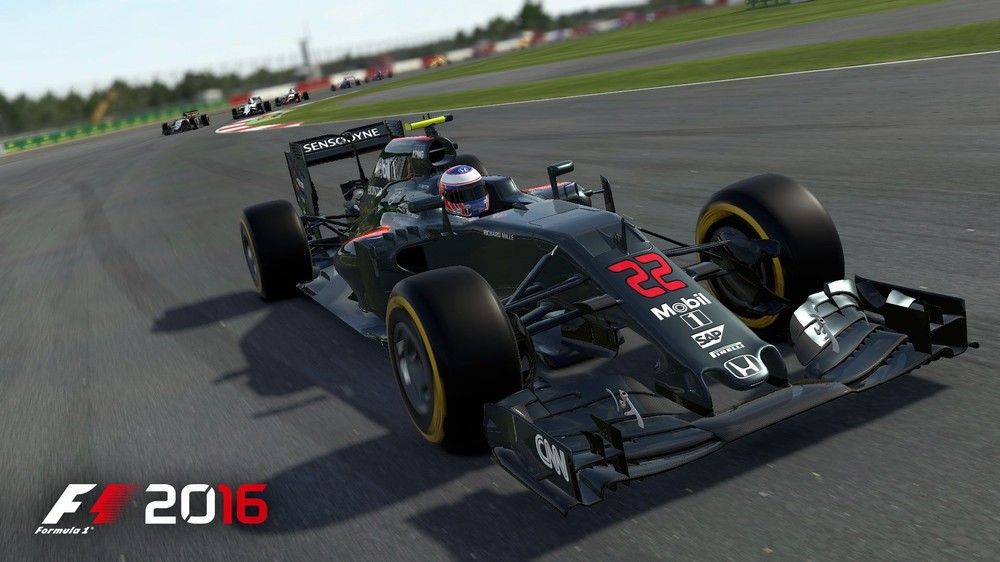 F1 2016 does an excellent job of instructing players thoroughly in all of these aspects of strategy with the practice session challenges that are offered at each circuit.  These come in three tests: Track Acclimatization, Tire Preservation, and Qualifying Pace. All three challenges (along with a handful of pre-set team goals) reward the gamer with development points used to pay for vehicle upgrade development from the R&D group.

Track Acclimatization runs drivers through laps set with virtual gates at the entry, apex and exit of each turn; racers follow the virtual racing line, going through each gate applying the appropriate magnitude of brake and/or gas to optimize the turn, a failure results in a “red” icon for the combo, success gives “green” and optimal gives “purple”.  Racers try to green or purple as much of the circuit as possible.

Tire Preservation places racers in another three-lap trial in which an onscreen meter shows the red/green/purple status of the tires as the gamer races.  The goal is to end in the purple, or optimal, condition – but with wear from excessive braking and slippage, the tires drop from purple to green, and then onto red.  Racers get a feel for what actions result in temporary damage, and what actions deliver permanent harm. 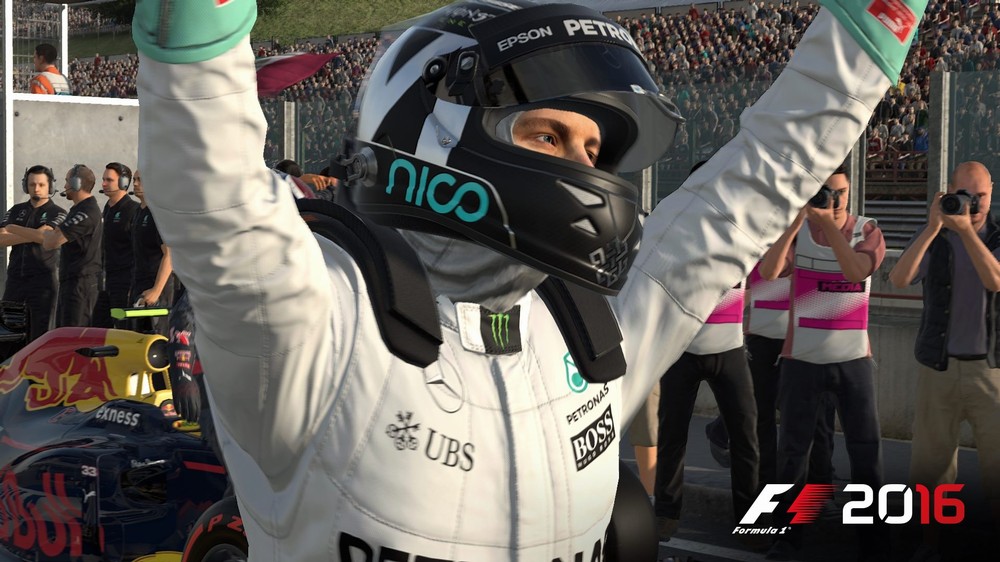 Online play is one area that’s a bit hit or miss.  This has been a problem that is common with racing games, but one that has especially plagued Codemasters games over the years.  I generally attribute it (right or wrong) to the fact that Codemasters games – due to the racing styles they represent – tend to have more international appeal and therefore a more global roster of online gamers, creating a lot more lag than we are accustomed to locally.  Online races tend to be a bit rough and tumble with people smashing about (often for fun), but thankfully the developers have chosen to “ghost” cars as soon as a serious collision occurs, keeping first-turn pileups at a minimum.

Aesthetically, F1 2016 is slightly better than good, but nothing near what we have witnessed with recent first-party racers.  The courses and cars are accurate and colorful, but the framerate does tend to skip a bit in times of heavy processing – even when running off the hard drive. The animations of the pit crew and fellow are a bit robotic, but the facial mapping is pretty impressive.  The audio is solid, including the radio instruction during the racing and the dialog between the agent and engineer, but there is very little in the way of commentary with which to really get a sense that they developers went out of their way with the sound quality.  Again, nothing terribly bad, but not all that impressive for a 2016-era game.

In the end, F1 2016 is a great racing experience that further underlines Codemasters’ 20-plus years’ worth of excellent racing franchises. 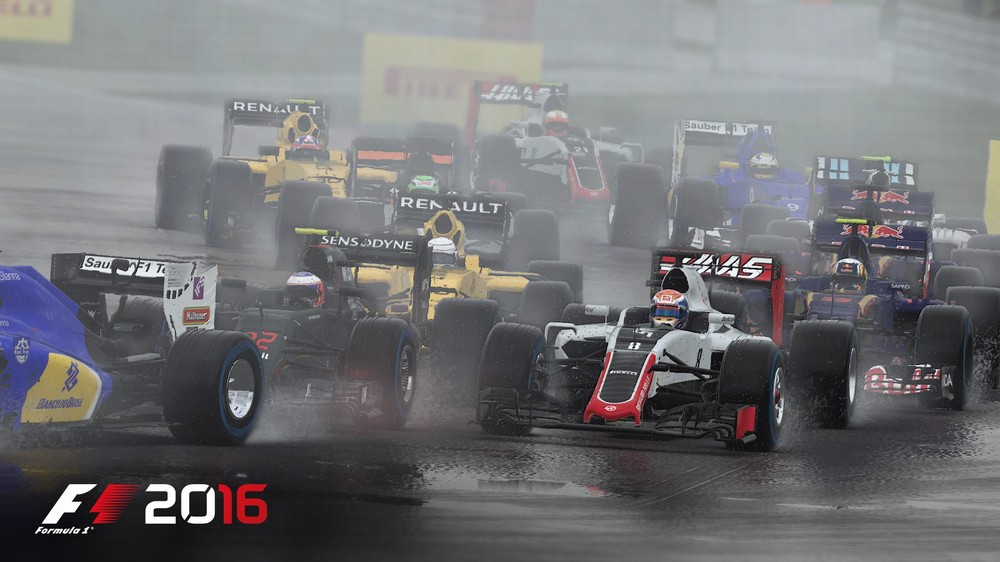 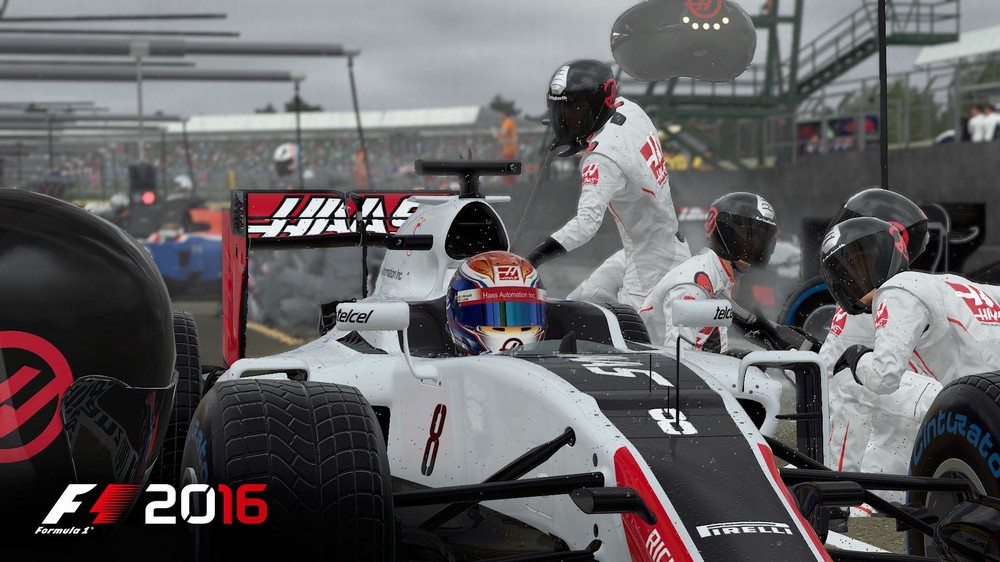 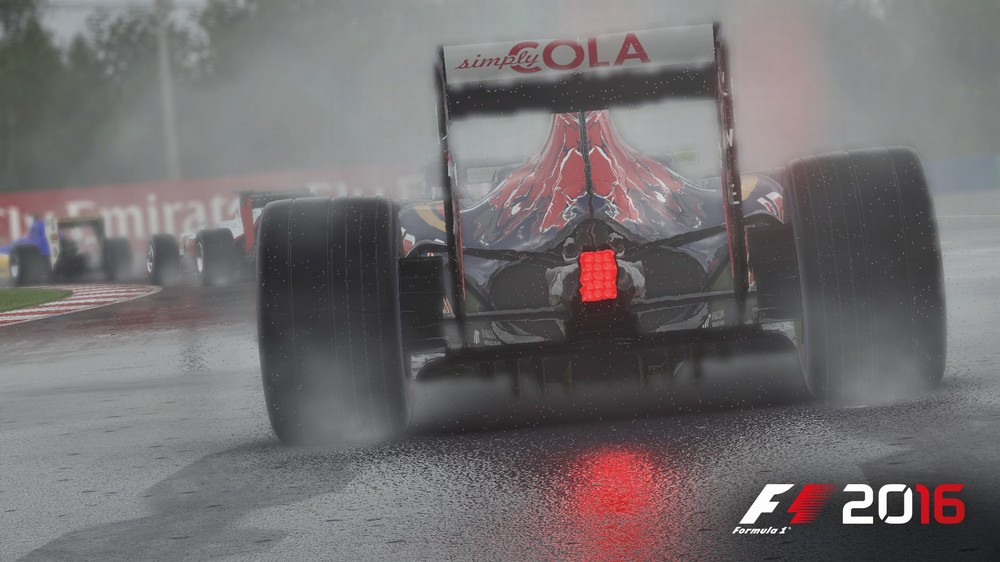