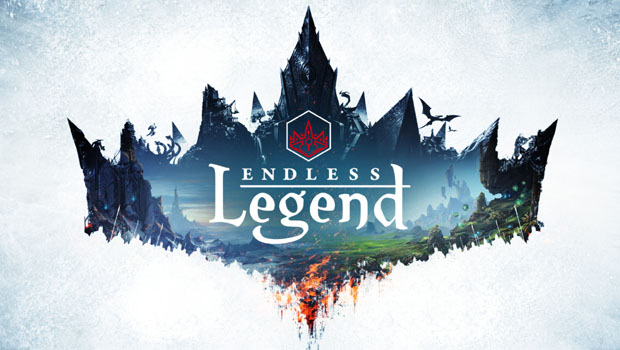 Too many small choices, not enough larger, more dramatic ones.

Endless Legend, the fantasy 4X game from Amplitude, creators of Endless Space and Dungeon of the Endless, is only about a month out from its early access release, and it’s already shaping up to be a better game than Endless Space was after years of development. Even with the gaps in its mechanics and small selection of factions, it’s a game with remarkable potential.

In Endless Legend, you play as the survivors of a deadly winter, trying to rebuild society on the dying world of Auriga. As you build cities, research new technologies, deal with the minor factions to pacify them or bring them into your empire, and make war against rivals, you’ll work to make the greatest empire on a planet that’s slowly freezing to death. It’s sort of a poetic commentary on the futility of the human project that will surely be ruined when they add extra victory conditions.

Sarcasm aside, for its very early state, it’s already a rich experience. Each of the four factions currently in the game play quite differently, from the Vaulters, who build up their defenses and have a marked technological advantage, to the Necrophages, a race of insects who are locked into eternal war with the other races of Auriga. Special features drop the map, each with interesting lore that highlights how the technologically-regressed inhabitants of Auriga relate to what the ancient Endless left behind. Quests lead you through gameplay, giving you goals to shoot for and lending a plot to each faction as they try to rise to power and glory. It is – and this is an important distinction among early access games – an actual, interesting strategy game. 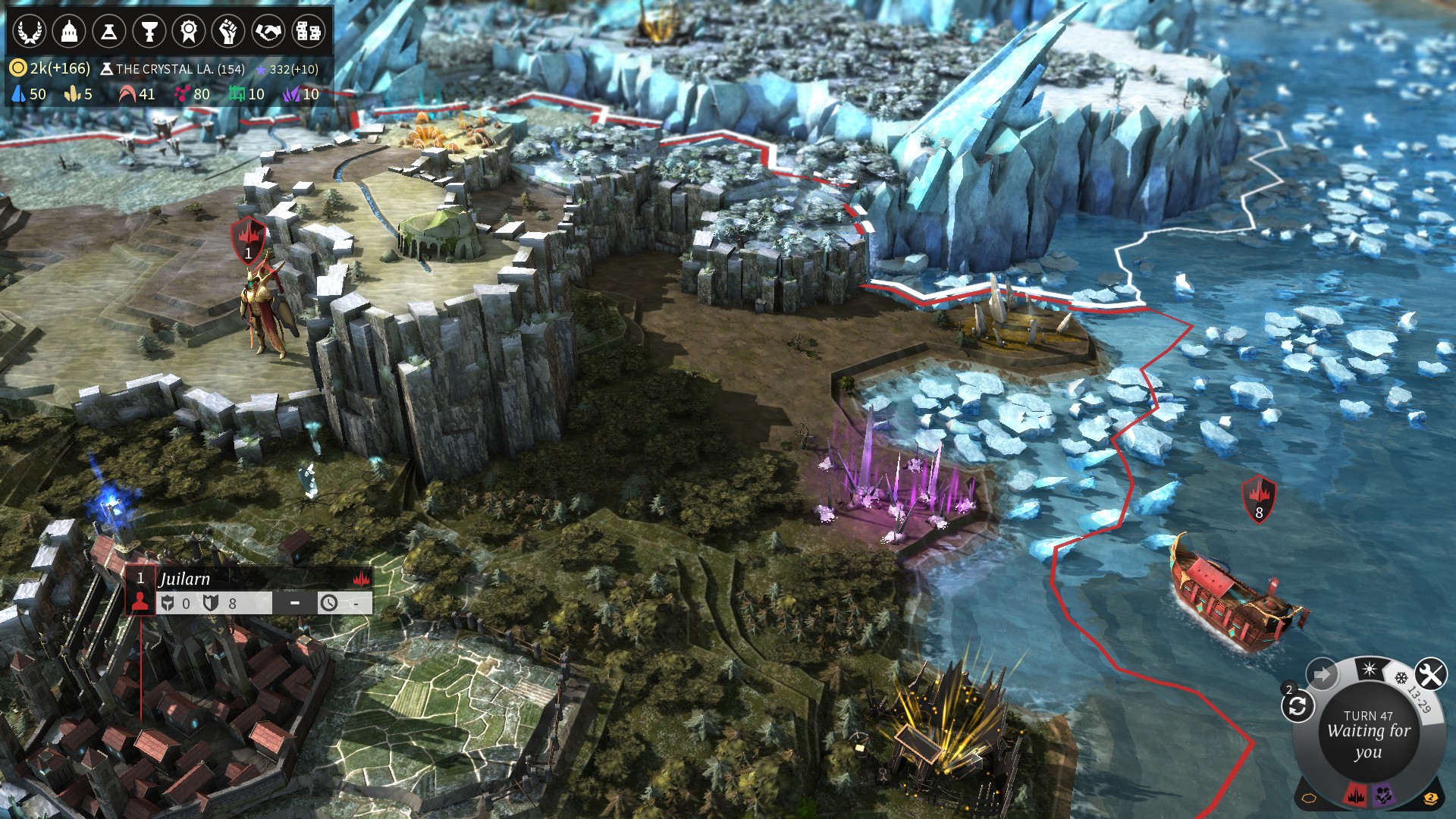 You’ll need to decide where to place and expand cities, plan military campaigns around the threat of winter, and balance the need to explore, the need to protect yourself, and the need to pacify the minor factions, even when you’re at peace. Once you meet other major factions, things get more complicated. Diplomacy is nothing special, but the AI can be fairly aggressive, so it’s important not to get complacent.

It definitely shares a lot of DNA with its older space-borne sibling. Though the game takes place on a hex map reminiscent of Civilization 5, when a battle happens, the forces spread out across the terrain, automatically playing out their fight with only minimal instructions from you, a version of Endless Space’s card-based combat that’s simultaneously stripped down and much more comprehensible. The research tree – more of a research blob, since you can research any tech from your current era or before at any time – has a series of technologies that seem more practical than fantastical, as Endless Space did. It even shares the core resources of Food, Science, Industry and Dust. But where Endless Space could feel a little bit empty, Endless Legend creates a vivid world.

Scouting out a region, trying to find the perfect place for you to place your city – only one per map region, and map regions can get pretty big – is a much more exciting experience than just sending a scout ship to a new star and hoping it has something useful for colonists. One thing it didn’t have, at least yet, is the ability to customize your rank and file units, though frankly, I don’t mind the small selection currently in the game, and limiting customization to your heroes gives them a good deal more focus. 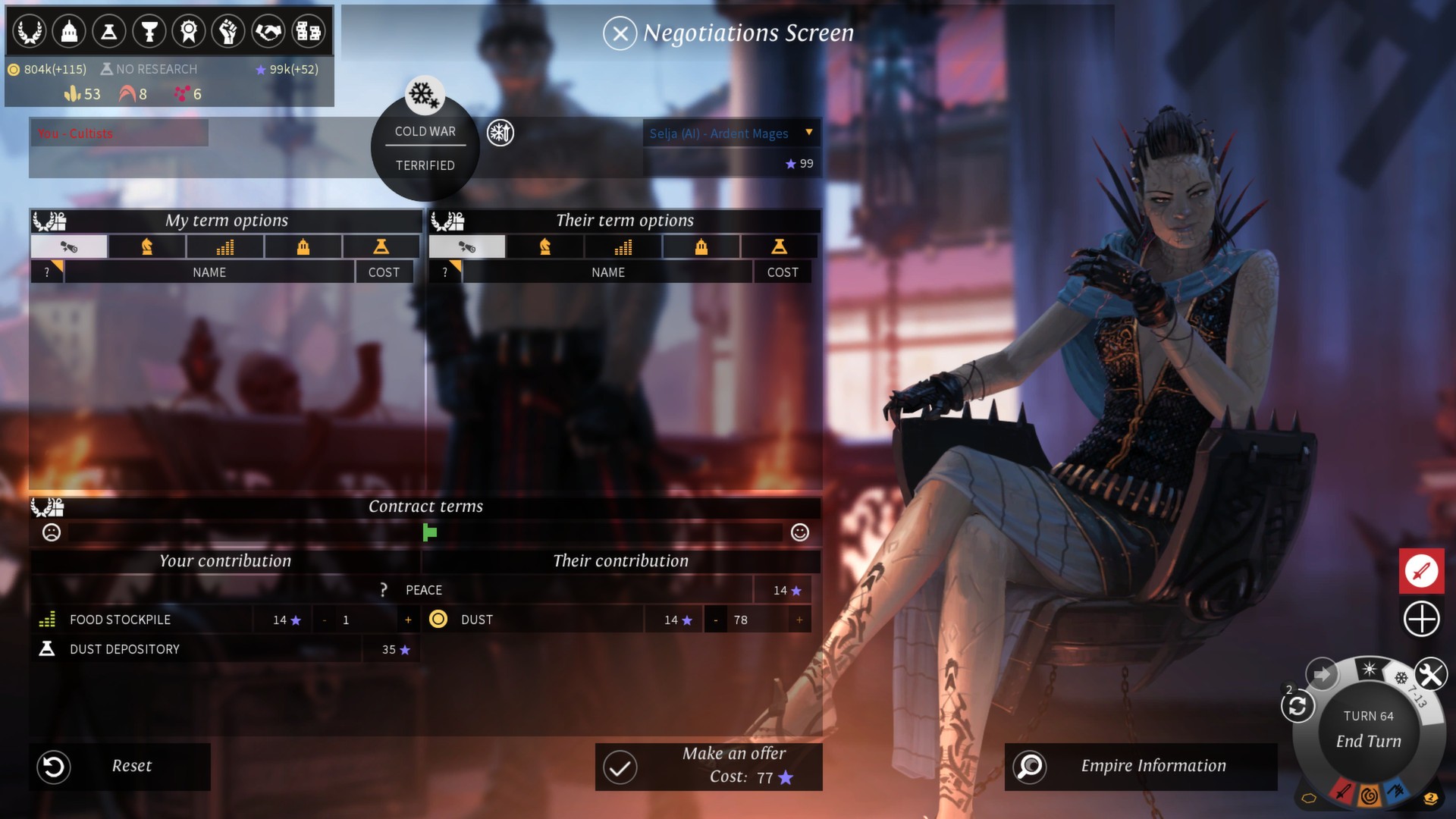 The narrative of a 4X game is always a huge source of enjoyment for me as I play, and Endless Legend manages a good job of that, even at this point in the game’s development. Detailed descriptions of the environment, well-written quest text that gives insight into the world, the ability to assimilate minor factions into your empire, all of this adds up to an ability to tell stories to yourself about the society you’re creating that’s fairly unmatched outside of the Civilization series.

The graphics are a mixed bag. The paintings for unit art, quests, and events are all beautiful, some of my favorites in recent games, while the 3d art for the world is really rough. It took me a while to get used to it, and even once I learned what each thing was, it still wasn’t especially attractive. The unit models are fine; striking a midpoint between the exquisite paintings and the super rough environments that I hope are placeholders.

Endless Legend has the potential to be an amazing 4X game, but even just now, it’s still better than quite a few who’ve made their way to market. I’m looking forward to seeing where it goes as it moves towards its release.

Endless Legend’s come a long way from its initial early access. While the game’s core concepts are largely unchanged, they’ve been built on dramatically, with roads, naval travel, and four new factions, each of which plays the game dramatically differently. That’s probably the game’s greatest triumph. Each of the game’s eight factions has unique elements adding a level of asymmetry that’s not often seen in 4X games. 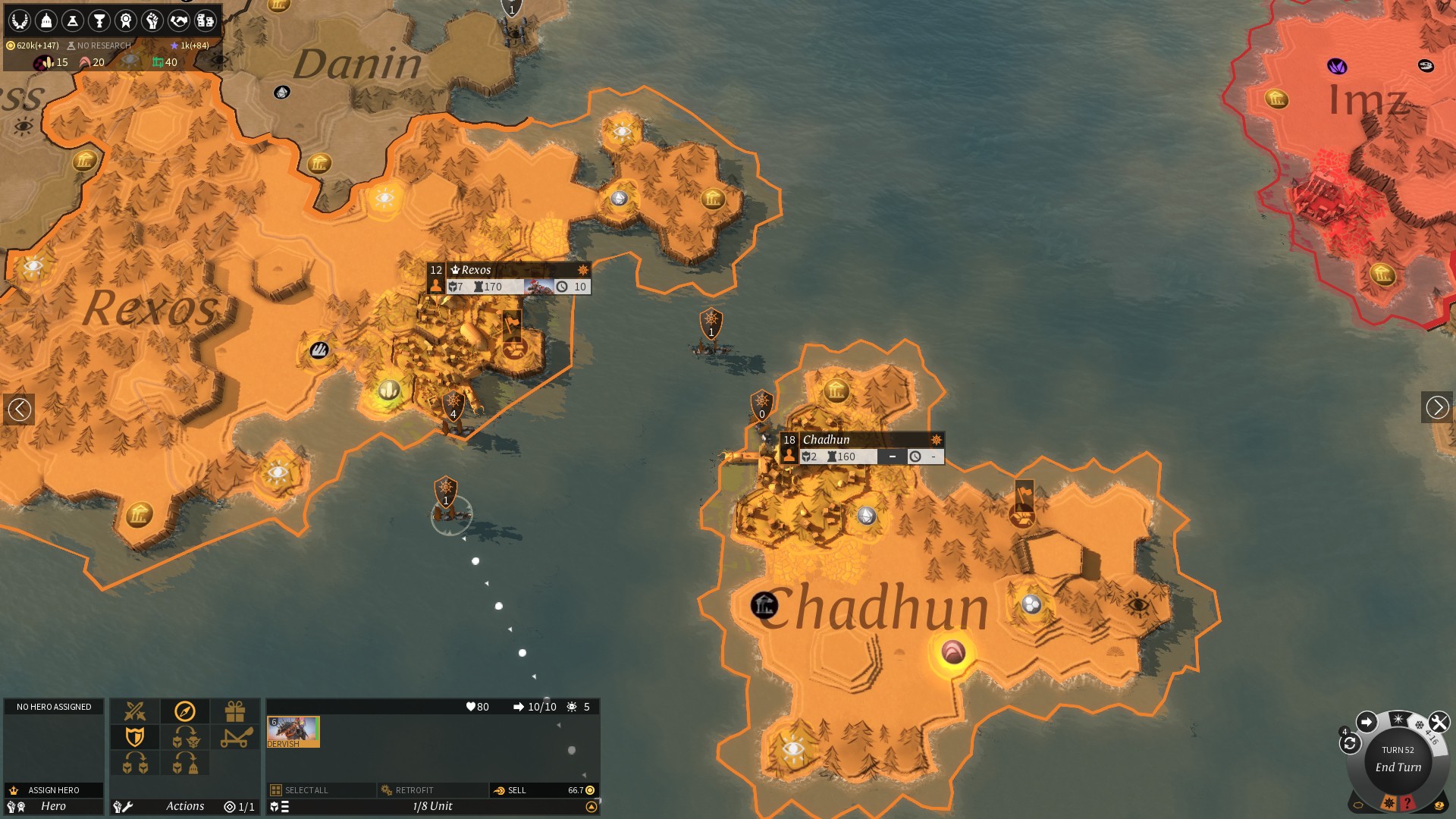 If you’re playing as the Roving Clans, who can move their cities on the backs of giant scarabs and can’t go to war unless someone else starts it, you’re playing a dramatically different game than someone playing the Necrophages, who are locked into war with every other faction, with abilities that pressure them to start fights in order to keep growing, or even the Cultists, who have one megacity and specialize in assimilating minor factions into their empire.

Every faction in this game shows a degree of personality and mechanical difference that’s just delightful. The game’s been polished from early beta, and now the map is rather attractive, complementing the aesthetics that the writing and paintings had already established. It’s actually managed to become one of the game’s highlights, and the abstract topography of the hex map and the way it plays into both battle and strategic movement is a fascinating element.

There are still a few rough spots – The tech tree presents too many choices at any given time for my liking, and I’m still getting used to city placement – but I’m starting to think that those are largely the growing pains of getting used to a game that’s rather different from any other 4X games I’ve played in a long while. Still, I do wish the game had fewer choices to make, with clearer results, rather than the myriad small choices that go into building an empire and heroes. 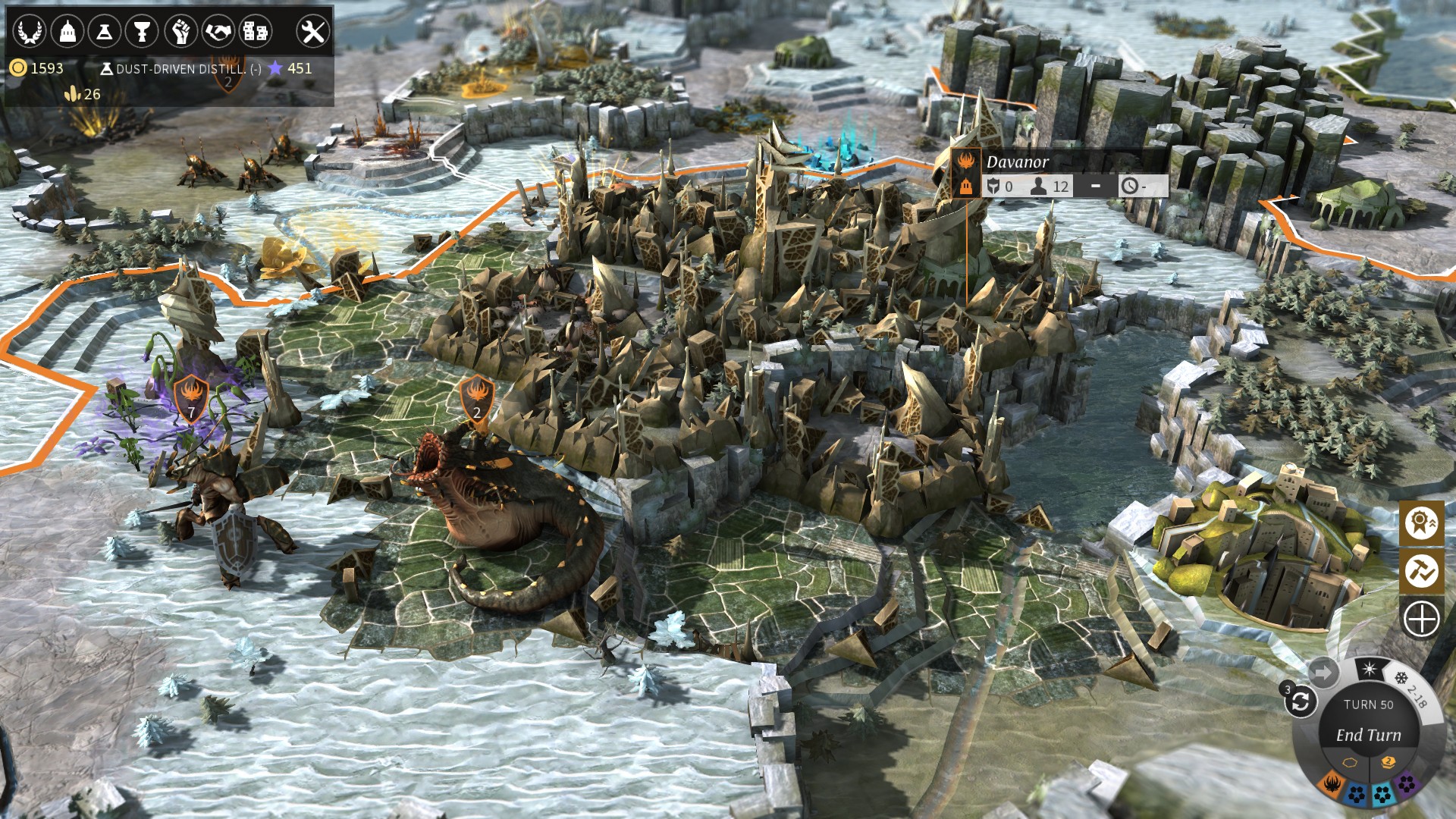 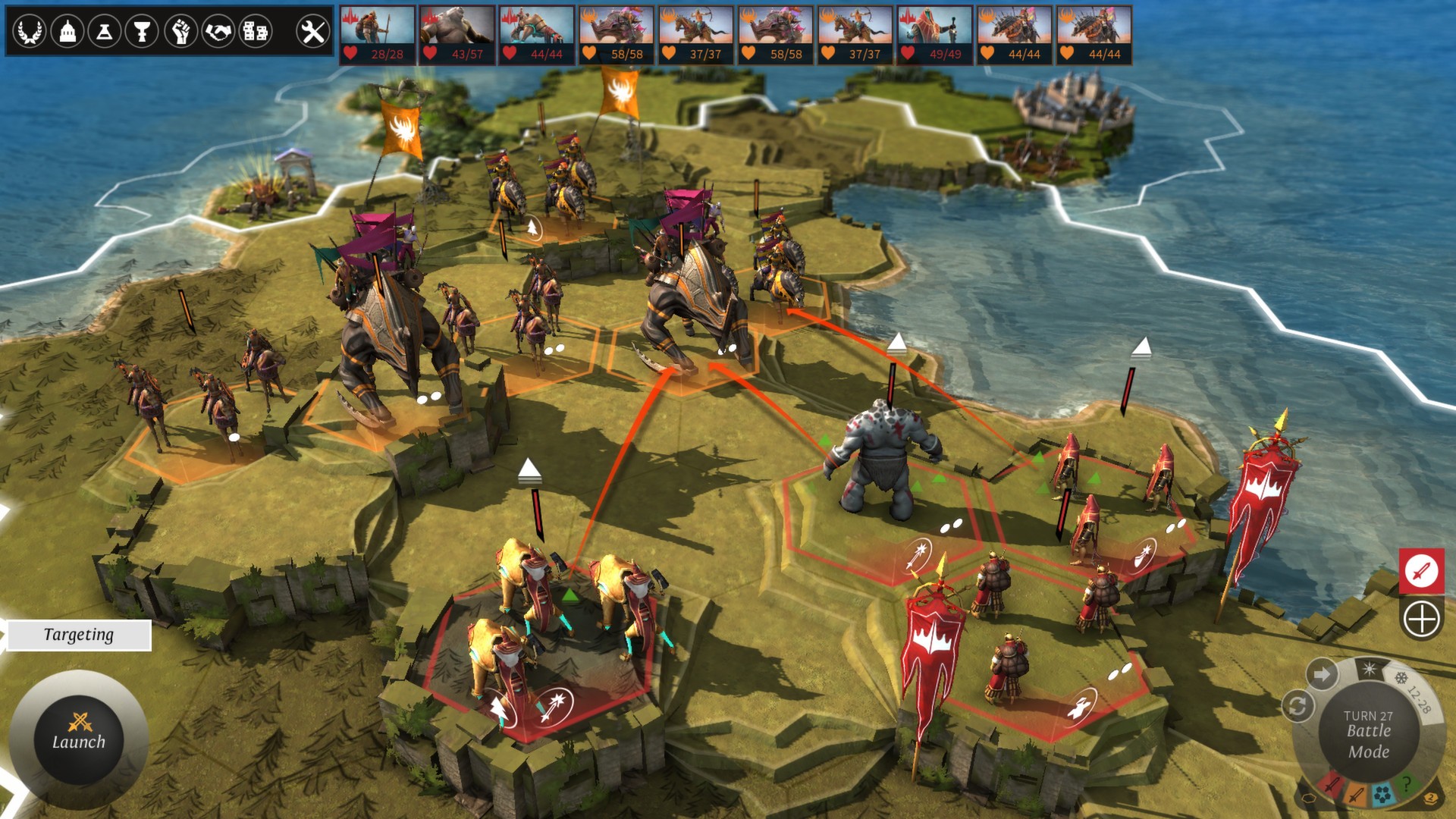 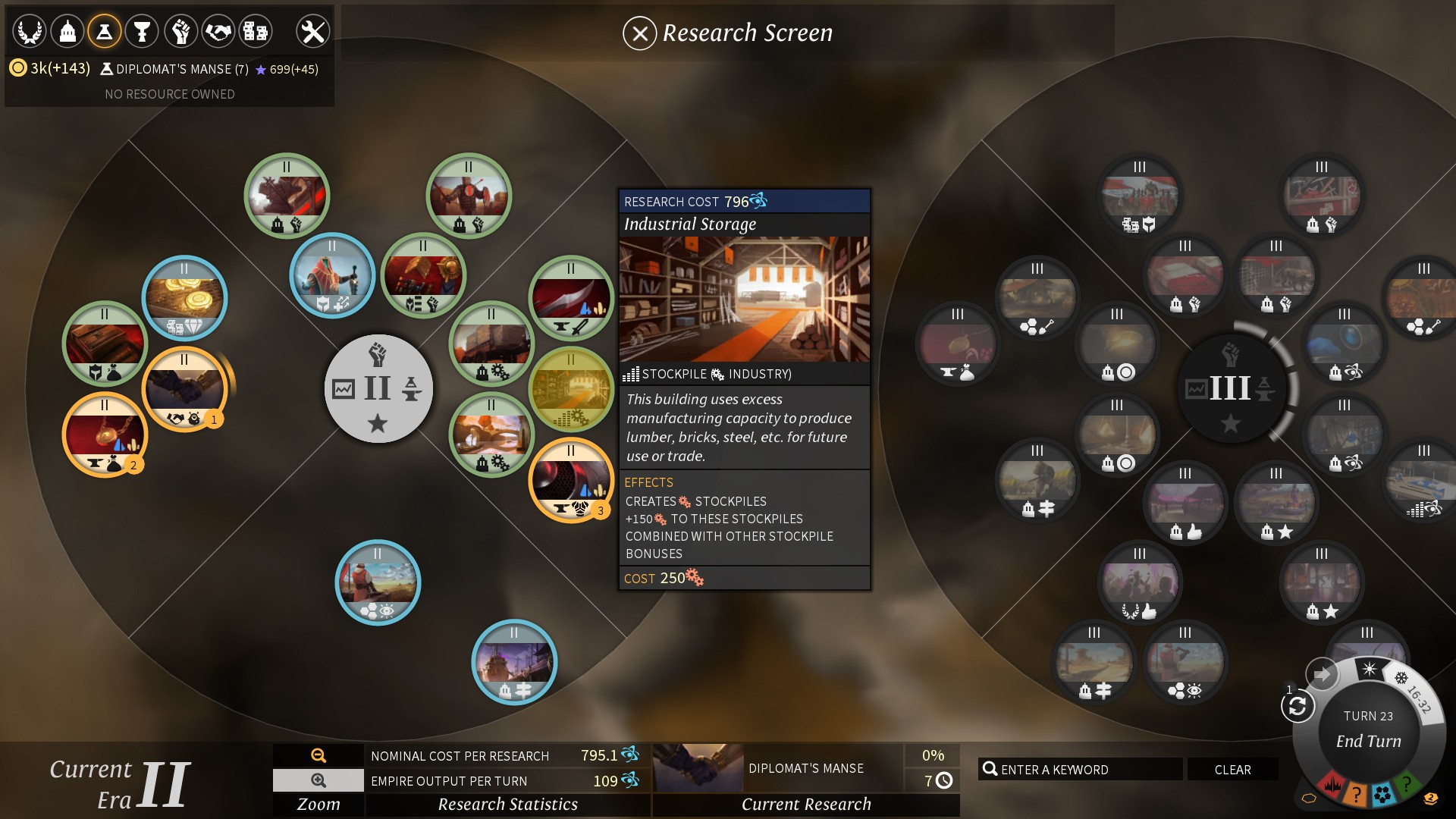 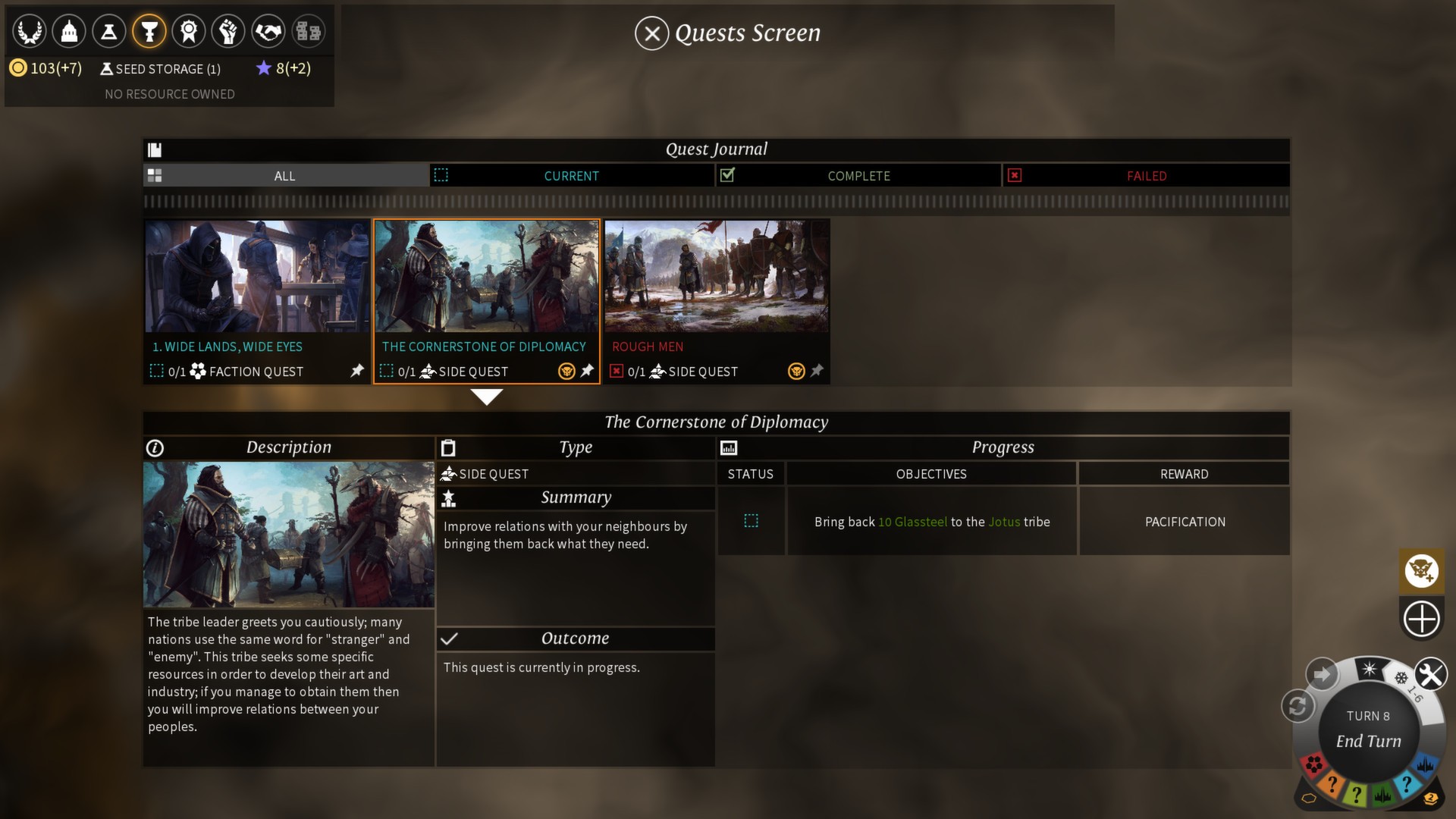 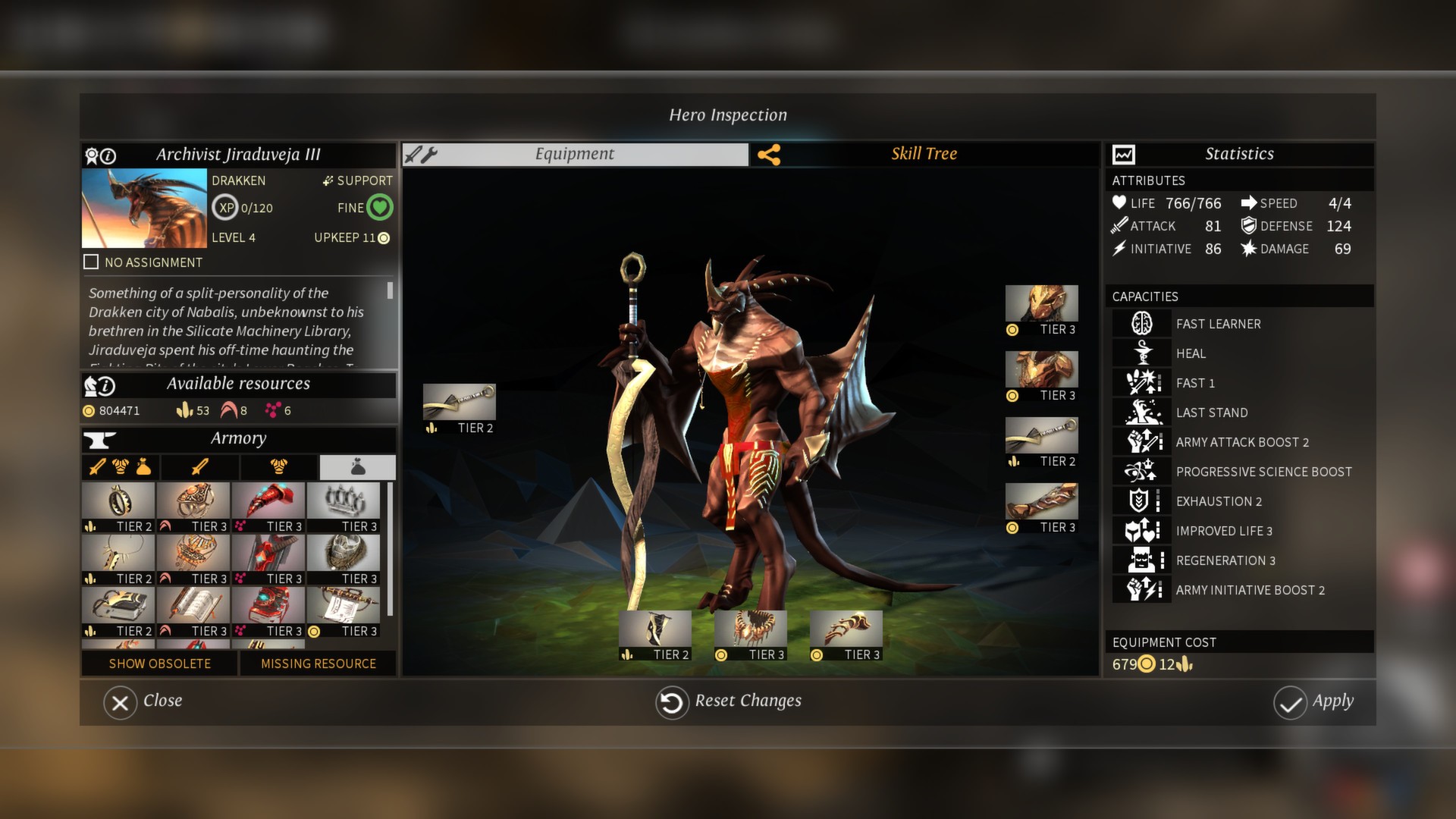