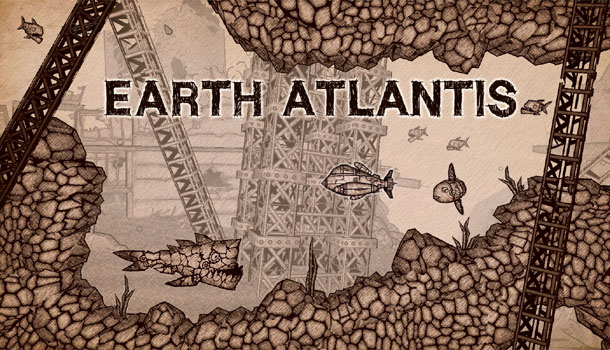 An absolute gem to experience.

There is no shortage of media containing acts of human civilization dooming itself into some for post-apocalyptic state. While many are found in literacy and film, it’s the playable media that often interests me most. So when I found out about Earth Atlantis by developer Pixel Perfex I couldn’t wait to literally dive into this underwater side scrolling shooter action.

The premise of Earth Atlantis takes place after “The Great Climate Shift” at the end of the 21st century where the world is now mostly one big swimming pool and human civilization is a shadow of its former self. In a weird mix of Waterworld meets Terminator that sounds rather risky on paper Earth Atlantis is an actually joy to play. In lieu of a more in-depth story you’re singularly tasked as a hunter to track down and defeat huge mechanical sea monsters that seem to pose a threat to the remains of humanity. 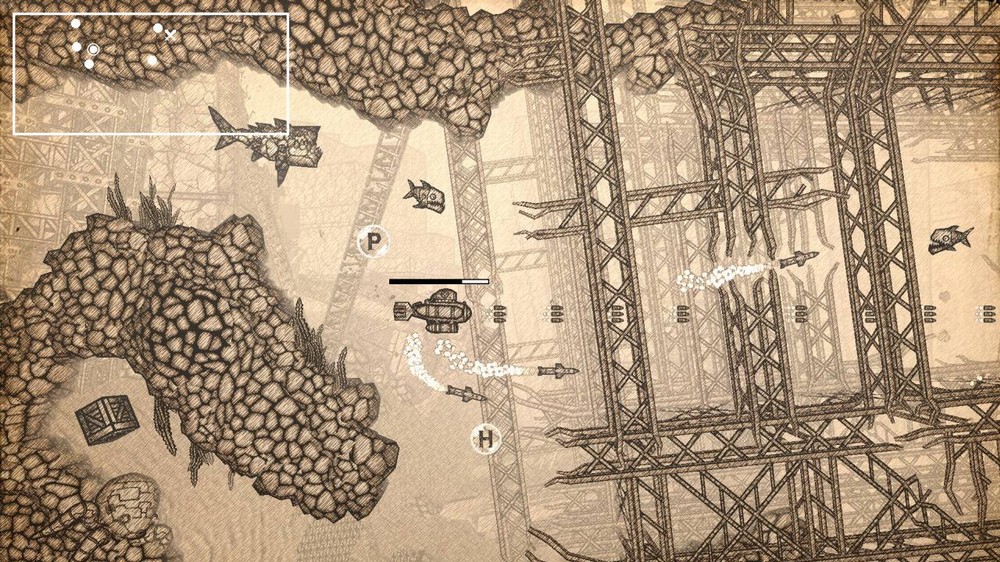 In fact everything under the sea has it out for you so you’ll need your A game to dispatch them all. The core of Earth Atlantis is a Metroidvania exercise in exploration filled with equal rewards and risks that gives every player a different experience. The nice thing about Earth Atlantis is that you will unlock three more unique ships over the course of your journey to eliminate 25 equally menacing monsters.

You’ll be spending a lot of time shooting your way through a large map instead of smaller levels which comes with its own sets of challenges. To begin with Earth Atlantis doesn’t hold your hand so there is a greater sense of danger and mystery. You will come across a few Start Points that act as checkpoints upon defeat should that danger become a little too real. There is a radar of sorts that serves as a minimalistic map that gives you a general idea of where each of the variously spawned boss are on the map. It even shows the general location of valuable power-ups in item boxes like homing missiles and electrical beams which are easily my favorites. 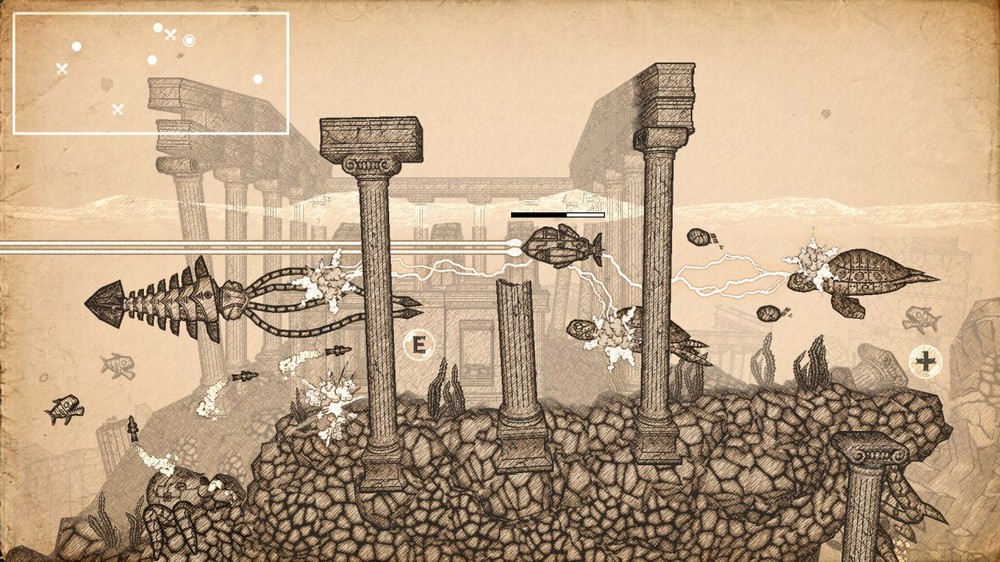 Seeking out these boxes is a gamble but the more of same power-ups that you collect the stronger the secondary attack gets. These attacks fire at the same time as your primary attack so you can focus more on your maneuvering than multiple fire buttons. Your primary attacks however can gain a boost in power in a more traditional way by defeating enemies in your wake and picking up the bubbles marked P that they drop at random. If you take a hit from any enemy though there is the probability that you will lose a bit of your power unless you recapture it almost immediately.

Part of the fun of Earth Atlantis is that even in defeat you can experiment with each power-up as you come across them to learn their strengths and weaknesses. Outside of the boss fights all the power-ups can be useful, though I found the boss fights themselves require a little more tactics. While most power-ups will do in a pinch, the electric beam I found particularly useful against close range and mobile bosses. Homing rockets and missiles are great however for long range encounters. No matter the weapons or ship the biggest thing to master is learning enemy patterns and avoiding their attacks, which for the most part is pretty common for titles such as Earth Atlantis. 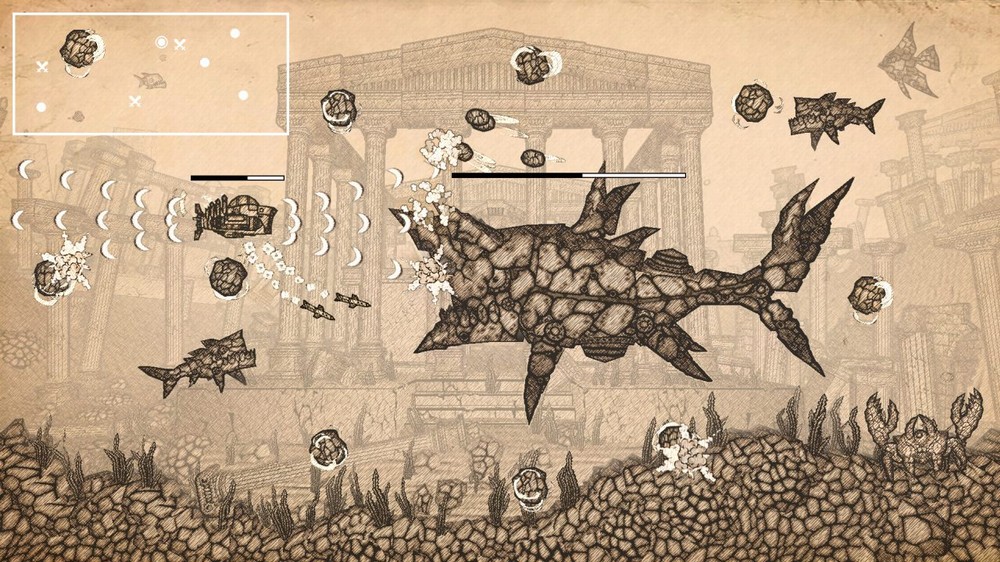 Earth Atlantis’ visual style does however lend to some enemies and their attacks being hard to see in the first place especially in tight locations so unlucky hits are bound to happen no matter how good you are with either control scheme. I have to say that Earth Atlantis handles really well with either the keyboard/mouse or controller setup. Players will feel right at home using a controller as it feels more in line with the Metroidvania style gameplay from which it was inspired. The default PC keyboard controls are kind of awkward with Z being used for firing and X for turning your ship from left to right. Luckily you can freely reconfigure the inputs to your liking as well as use the mouse for those two functions for more ease.

Outside of the aforementioned enemy camouflage, the visuals of Earth Atlantis are easily its most stunning feature. Every bit of it is beautifully created in a 14th century “Old Sketching” art style that would fit right at home amidst some of Da Vinci’s works. This art style is particularly easy on the eyes making the overall experience incredibly hard to step away from. I also love the depth portrayed by the layered background and foreground visuals and how some enemies switch between the layers. Unlike more visually flashy titles of this genre, I could literally sit and play Earth Atlantis for hours. This is enhanced even more with a score that shifts from soothing exploration melodies to energetic pieces during boss fights seamlessly at any given moment to great effect. 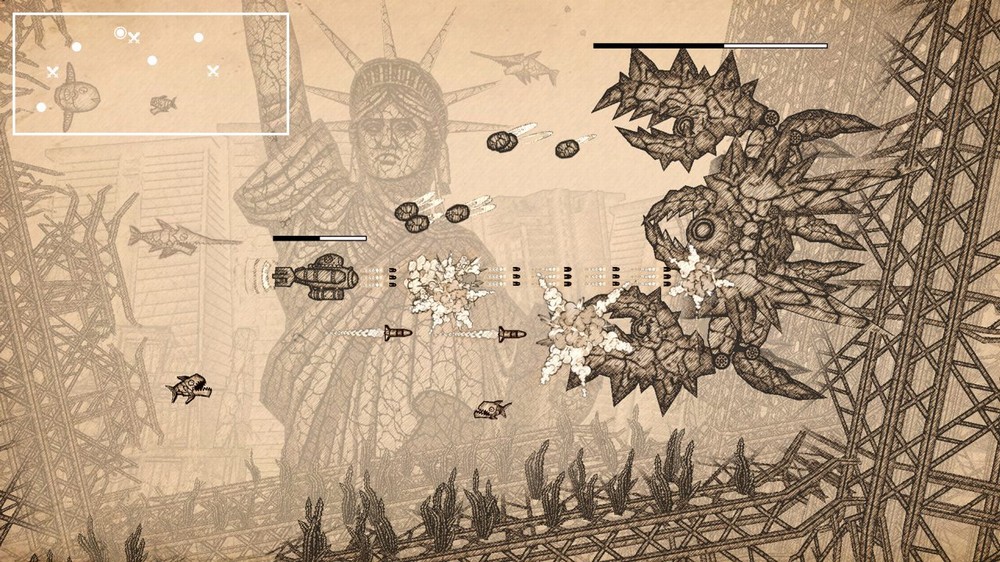 Video games are often called works of visual art and I absolutely agree as titles have evolved over the years into something more than just ways to pass the time. The style of Earth Atlantis may appear simplistic in its look at first but it is nothing short of gorgeous in its complexity the more you take it in. It is this visual style and the blending of the roots of both the shoot’em up and Metroidvania genres alike that have created something that is an absolute gem to experience. If you enjoy classic shoot’em ups and the openness of a Metroidvania then you have to check out Earth Atlantis for PC today.

1
768
The Walking Dead: Saints & Sinners Review – Oculus Quest
2
706
Synth Riders Celebrates Anniversary with a Month Full of Treats and an Oculus Ques...
3
705
Worm Jazz Review – PC
4
705
Take to the Skies and Choose a Side in the New Trailer for Next Generation Air Com...
5
705
CRASH BANDICOOT 4: IT’S ABOUT TIME IS AVAILABLE NOW
6
705
Frictional Games Shows Off First Gameplay Footage of Amnesia: Rebirth
7
705
Join the Galaxy’s Finest as Star Wars™: Squadrons Soars Into Homes Today
8
705
Metamorphosis is 33% Off on Steam!
9
705
Werewolf: The Apocalypse – Heart of the Forest launches on October the 13th
10
704
The Falconeer First-Look Preview – PC
All Original Content on Game Chronicles is Copyright (c) 2002-2020
Sinjin Solves Walkthroughs Copyright (c) 1996-2020 by Mark Smith