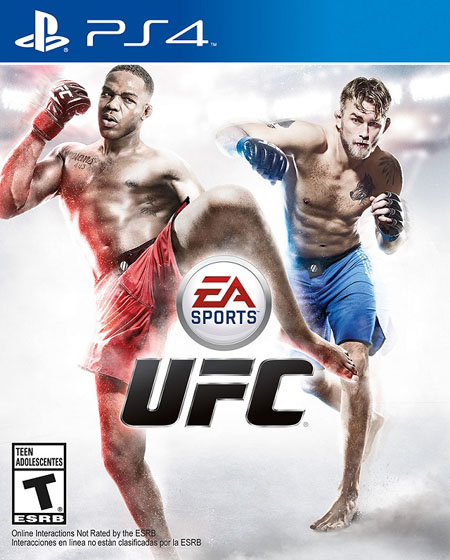 Lacks the depth of the THQ titles.
Prone to random visual glitches
A little too complex at times.

A solid first effort for EA Sports. While it may lack some of the depth and micro-management of the THQ/Yukes original games, the reality show style career mode and fantastic visuals more than make up for any shortcomings.

Mixed Martial Arts (MMA) fighting is a brutal sport that has been around for decades, but has been enjoying a particularly impressive surge of popularity in the past few years thanks to the fantastic production and promotion of the Ultimate Fighting Challenge (UFC).

There have been a number of UFC fighting titles released over the years, most notably the UFC Undisputed series, which was developed by the highly revered fighting game developer Yukes and distributed by the now-defunct THQ.  THQ and Yukes’ Undisputed series consistently garnered critical acclaim in its three releases, in particular UFC Undisputed 3 which represented a complete makeover for the series making the historically complex fighting mechanic more accessible and enjoyable for the more-traditional fighting game fan.

With the demise of THQ, the UFC was left looking for a new distributor for their popular series; the federation decided to put aside a long-standing rivalry with EA Sports to develop EA Sports UFC.  EA immediately placed their upcoming Fight Night title on hold, and assigned Fight Night’s EA Canada studio to the development of UFC for the new (current) generation of consoles. 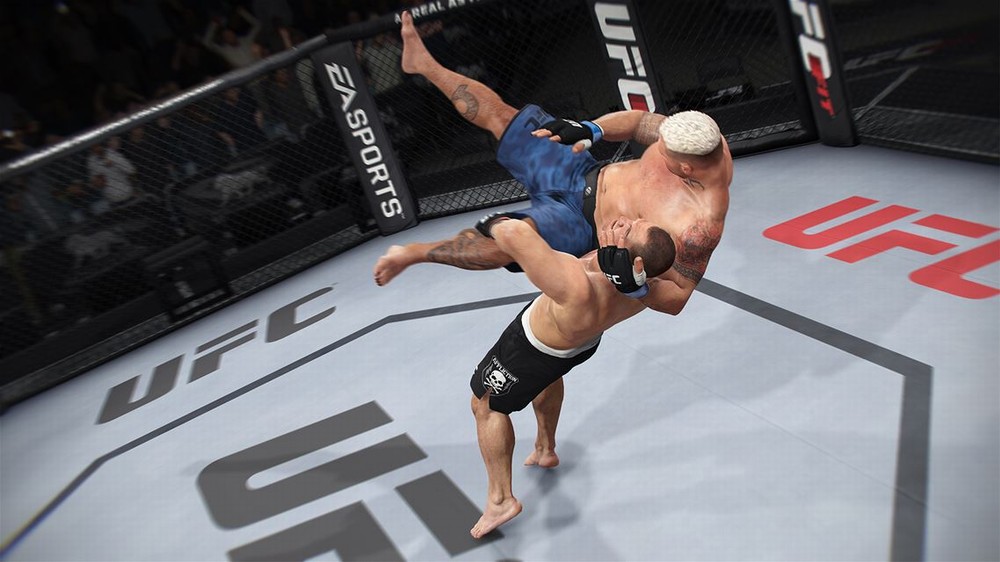 The result of EA Canada’s endeavors is one of the most visually impressive fighting games yet to be seen on any gaming platform to date.  The character models and effects are so remarkable, so realistic, that it is surprisingly difficult to discern between actual human fighters and AI characters featured in the game.  The amazing visuals extend beyond the ring as well – with hyper-realistic representations of the eleven unique arenas, complete with dynamic camera crews, active crowds, and striking lighting effects.

Visuals alone do not make a game, mechanics are equally as important, and EA Sports does a solid job in its inaugural UFC release.  Based on the diverse stable of fighting methods that clash in the octagon, MMA is an incredibly difficult sport to try to translate to a video game controller, but it is obvious that EA Canada has made a concerted effort to balance the sport’s complexity with the accessibility needed to keep from overwhelming gamers.

Those familiar with MMA will know that fighting can take place in three distinct stances – stand-up fighting, clinch fighting (i.e. grappling), or ground fighting – but within there are numerous combinations of attacks and defenses based on the myriad fighting styles at play.  This can make for a very complex gaming mechanic, but EA Canada has attempted to make their system bit more intuitive with a scheme built on context-sensitive button presses and analog stick swipes based on the two fighters’ positions. 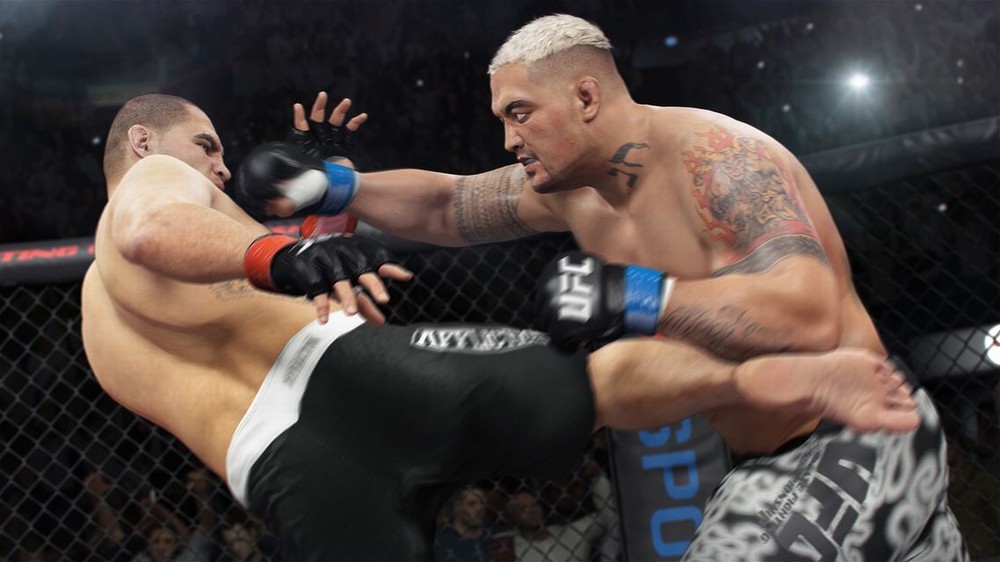 That’s not to say EA’s system isn’t complex – there is still a big learning curve to be had, but new gamers can still have fun (and win matches) without being forced to learn all the intricacies of the various holds and escapes.  The scheme really does a good job capturing the ability for fighters to quickly reverse a seemingly submissive fighting position into a tactical upper-hand through the use of leverage.

Fans of the UFC are sure to delight in EA’s The Ultimate Fighter Career Mode, which places gamers in the role of contestant on the popular The Ultimate Fighter reality television show.  Gamers can design their own character including appearance, build, and fighting style – and then take their fighter into the training arena where they will go through typical training exercises including  heavy bags, Thai pads, and various sparring challenges for Stand-Up, Clinch, and Ground-fighting tactics.  The inclusion of the television show into the career mode, complete with ratings for “Popularity” and “Longevity” help give the career mode an authentic and exciting atmosphere.

The televised experience is further enhanced with the inclusion of UFC announcers Mike Goldberg and Joe Rogan, who do a surprisingly good job of keeping the up with the onscreen action without seeming overly redundant.  The commentary is as witty and entertaining as it is informative.

The remainder of the audio is equally as impressive, with fantastic arena noise, mat crashes, and character sounds.  The game also sports a solid soundtrack featuring the likes of Band of Skulls’ “Asleep At The Wheel,” DMX’s “Ain’t No Sunshine,” Linkin Park’s “Guilty All The Same,” and 23 other hard-rocking tunes that serve as menu and entrance music. 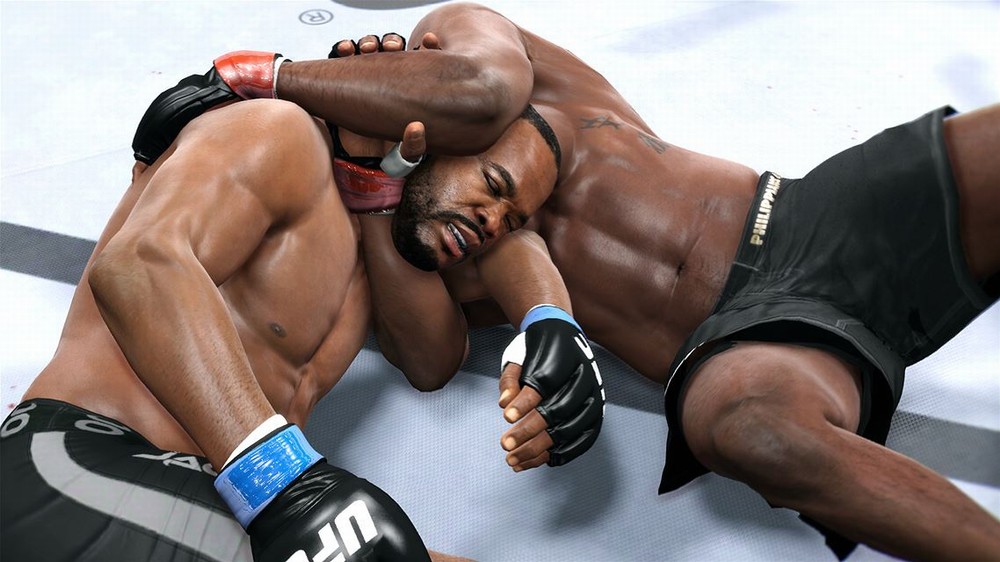 In all, EA Sports UFC features 97 fighters, including the two cover athletes Jon “Bones” Jones and Alexander “The Mauler” Gustafsson, as well as UFC favorites like Chuck Lidell, Jose Aldo, Cain Velasquez and Demetrious Johnson.  The game also features a couple of surprise unlockables, not the least of which is the great Bruce Lee.  Yes, THE Bruce Lee – and the best part is that he is not some super-fighter, but a realistic representation of what Bruce Lee would be like if he were to partake in UFC fighting in 2014.   Each character has been rendered in amazing realism – EA Canada even figured out how to avoid the cadaverish facial expressions we have come to expect from hyper-realistic facial rendering.

EA Sports’s UFC employs EA’s new menu format, which is a lot like the stylish tiled layout utilized by Windows 8 and the Xbox consoles – and like those consoles, it is not the easiest to navigate as tiles’ sizes do not always seem indicative of relative importance.  The gamer is compelled to aim for the bigger boxes, but they aren’t always the pathway to the intended gameplay.  It’s a small gripe, and one that can easily be overcome, but EA really should maybe begin to reassess their choice of menu layout for the future.

Overall, we found ourselves pleasantly surprised with EA Sports’ first official foray in the UFC arena.  With top notch presentation, and an accessible control scheme – EA Sports UFC proved to be a perfect introduction to fans and newbies alike. 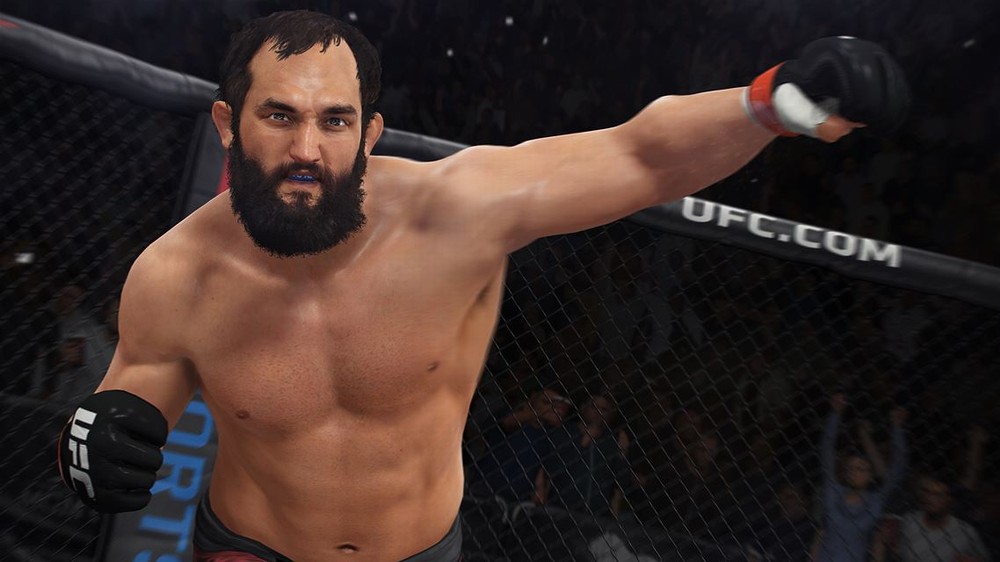 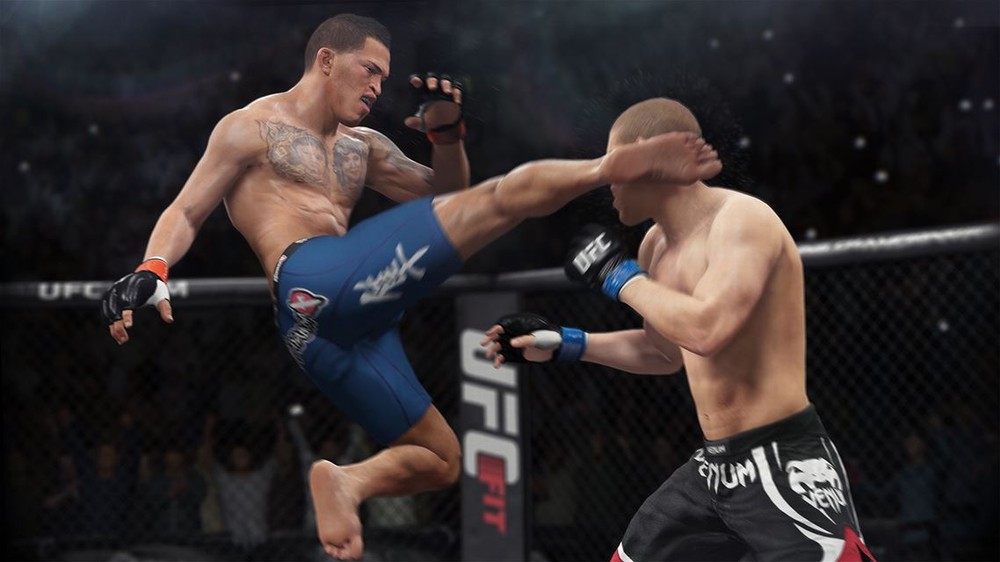 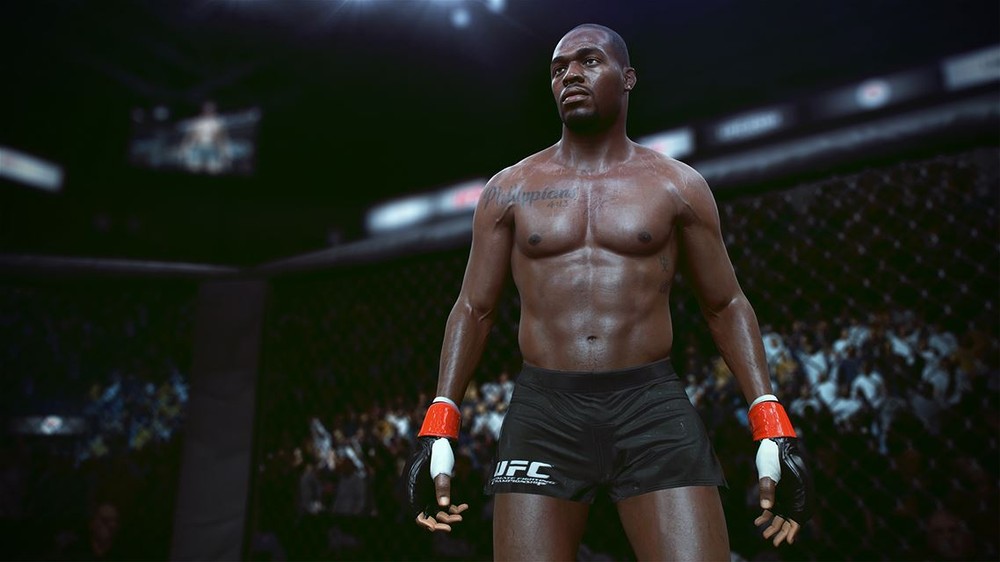 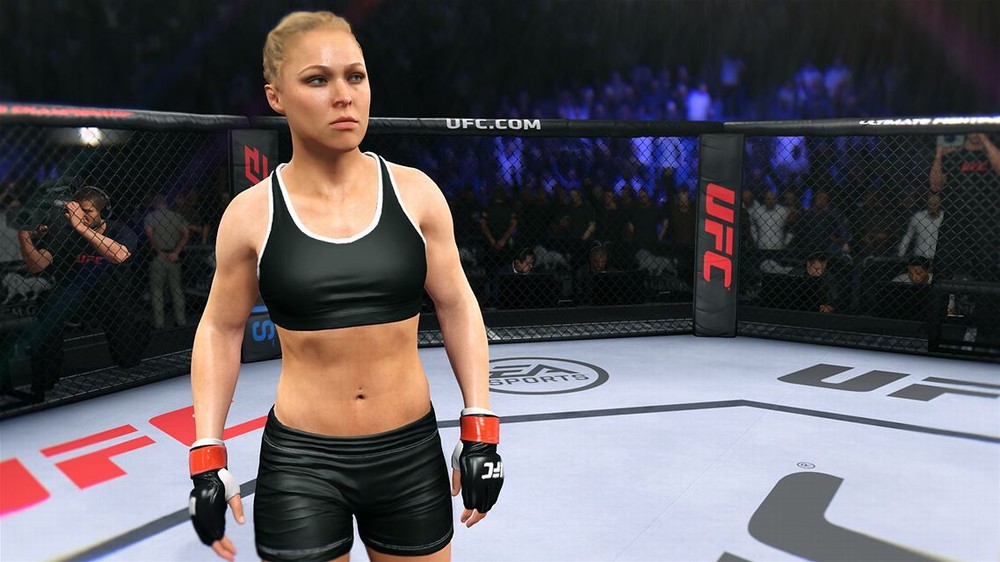 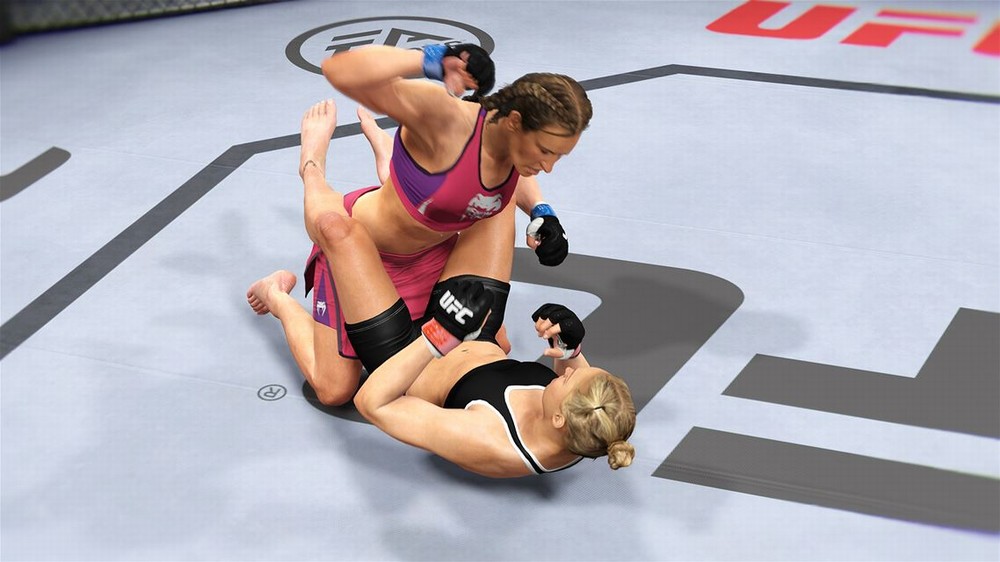 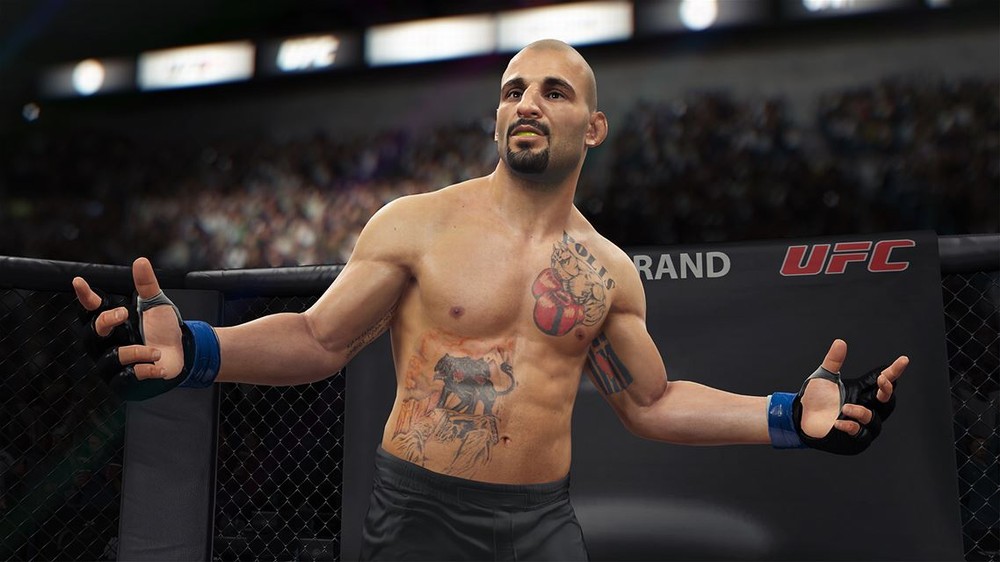