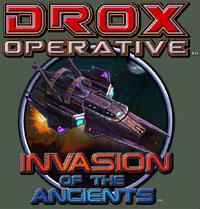 About a year ago, I reviewed the game Drox Operative by Soldak Entertainment. This year, Soldak expanded upon the Drox universe by releasing the first expansion to the game, called Invasion of the Ancients. According to the description, this expansion “Adds ancient invasions, space stations, persistent galaxies, Scavenger race, Drox Guild quests, new Talon, Legion, and Overlord monsters, 19 playable sub-races, and much more.”

The Ancients are described as a group of races that were basically banished from the known universe thousands of years ago. Now that the Drox have been removed from power, the Ancients are returning to reclaim what they lost.

With the expansion installed, the game still plays much the same as it did previously, just with the added features snuck in to add to the depth of the gameplay available.  Since the game is procedurally generated, no two experiences are ever the same in Drox Operative, which makes noticing these new features slightly difficult. However, rest assured that they are there, lurking in the vastness of space waiting to crush you as you explore, fight, and trade your way to success.

The most immediately noticeable difference is the addition of the new playable race, the Scavengers. Imagine something akin to the Borg from Star Trek. These guys like to take anything and everything from their defeated opponents and use them for their own, including bodies, which makes them extremely nasty and gloriously fun to play.

Drox Operative, from the beginning, offered a depth that was surprising and unexpected, but also welcome and refreshing. The expansion only adds to this depth, giving the player more options and more possibilities to explore the vast galaxy that is presented to them at the beginning of their campaign. Added to the fact that each time you play is a guaranteed unique experience.

I still maintain that people who, like me, are interested in space 4x games, but don’t have the patience to slog through all the minutiae of every single detail, Drox Operative and the Invasion of the Ancients expansion, will satisfy your craving to take part in that style of game without having to worry about so many of the galaxy dominating details. It’s all about you, the Operative, in this game, and how you find your niche in that galaxy is completely up to you.