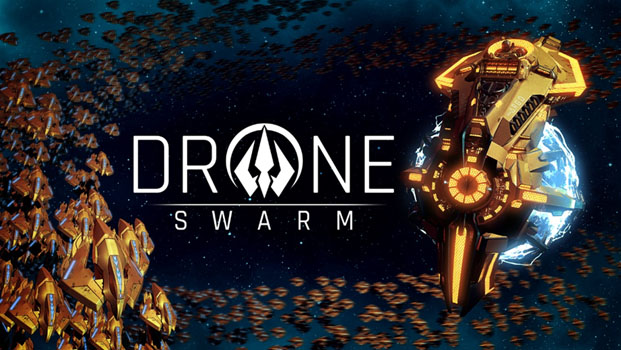 A cool concept and story, amazing visuals, and thrilling gameplay.

In a world overflowing with space shooters Drone Swarm manages to distance itself from the pack with a cool concept and story, amazing visuals, and thrilling gameplay.  The setup is pretty standard stuff.  Aliens invade Earth, you repel the invasion but the planet is left uninhabitable, leaving you to play Carter, captain of the Argo, an ark-like vessel that carries the last 32,000 survivors of Earth as you travel and explore the galaxy in search of a new home.   Each of the survivors has special psionic abilities that allow them to control drones that you will use to defend and attack in numerous enemy encounters.

Gameplay is pretty simple at first.  Played entirely with a mouse (no controller support) you will warp into a new location where there will undoubtedly be some enemy encounter; either small fighters or larger capital ships or a combination of both.  It’s up to you to manage your arsenal of 32,000 drones by choosing to use them as defensive shields or offensive attack ships.  By dragging the mouse you can literally draw a path that the drones will follow.  If you select shields the drones will form a wall around the Argo blocking incoming attacks, but you can also send out your drones to attack by drawing a line between the Argo and the enemy.  This gets increasingly challenging when enemies show up with shields and others start to circle your ship forcing you to find the optimal path of attack. 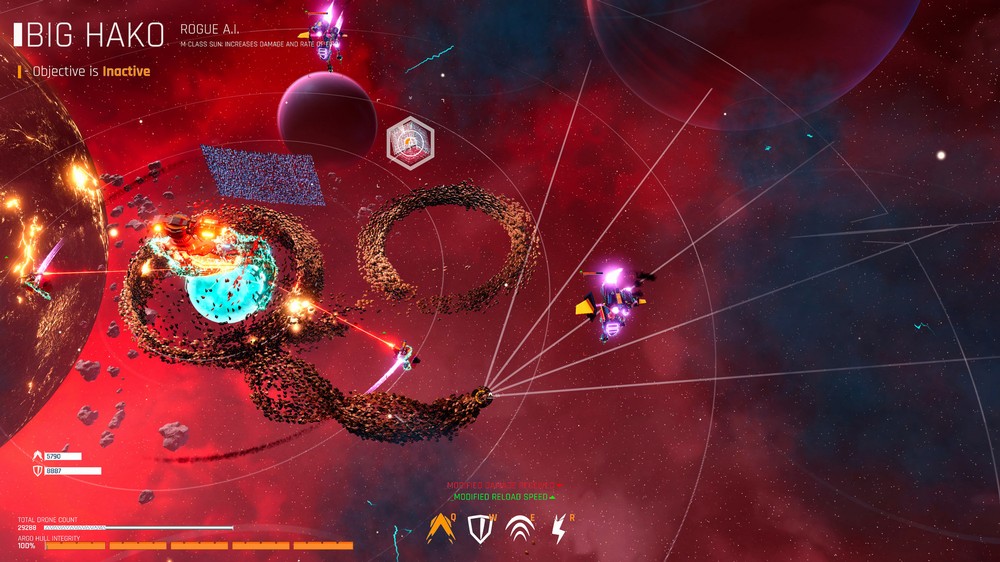 The real strategy lies in rationing your drones so you aren’t left defenseless but also have enough drones left to attack, as your total number of drones is slowly depleted during combat.  But it’s not all combat.  There is this cool kinetic ability that lets you build up a cluster of drones that you can send off in any direction to “punch” objects like ships and cargo containers.  Other additional weapons and abilities are introduced as you progress through over 100 enemy encounters, but even these can’t fully eliminate that feeling of repetitiveness that sets in after a few hours.  You’ll need to upgrade the Argo and develop new tactics combining simultaneous defense and attack as you get deeper into the story and the enemies become quite formidable.

Drone Swarm looks amazing despite having ships and backgrounds that look similar to most other space shooters out there.  What really sets the game apart is the drone swarm that is brilliantly animated and controlled with the swipe of a mouse.  I was totally reminded of the final battles in Enders Game with thousands of ships buzzing around in this organic cluster that almost seems alive.  The music and sound effects are excellent and add to the overall experience, and the narrative cutscenes are pretty cool and made me want to see where the story was going. 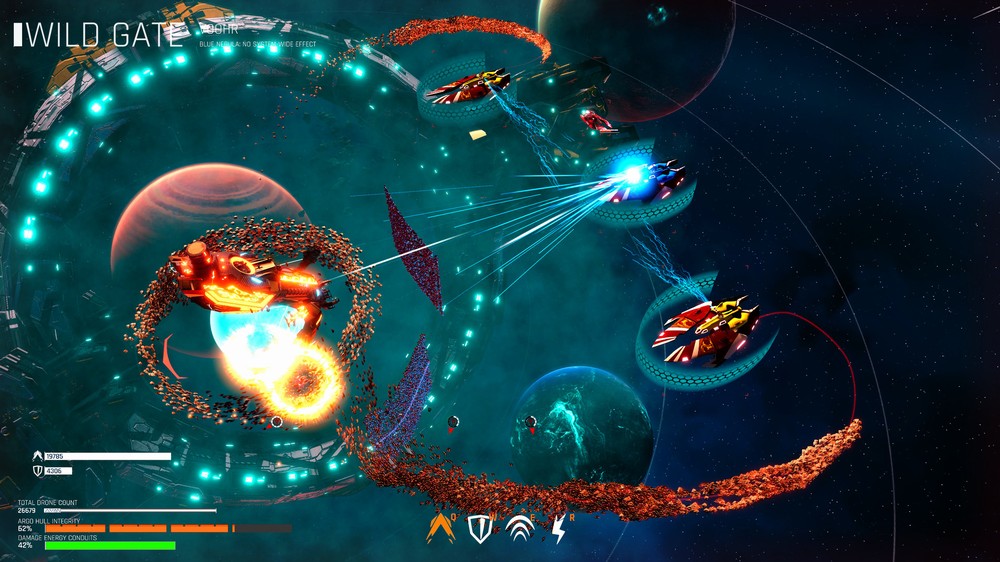 It will take some time to finish all the missions assuming you don’t get bored and quit before it’s over.  There are only so many ways to approach these battles and with minimal variations and upgrades the cycle of moving to a new sector and fighting off aliens gets boring a few hours in.  It’s best to consume this game in shorter sessions.  My only major issue with the game is the small text in the UI.  I was playing at 4K on an 85” TV sitting about 9ft away and couldn’t read any of it.  I dad to stand up and approach the TV every time something new popped up on the screen.  Definitely needs a UI scaling slider in the options.

Drone Swarm is a beautiful space “shooter” with variable levels of strategy that slowly evolves over the course of the lengthy story mode.  I would have enjoyed a bit more variety in the game and a two-player mode would be awesome so you could battle real humans, but otherwise expect 10-15 hours of slightly addictive and repetitive gameplay that is made a bit more tolerable with a cool story presentation and intense gameplay. 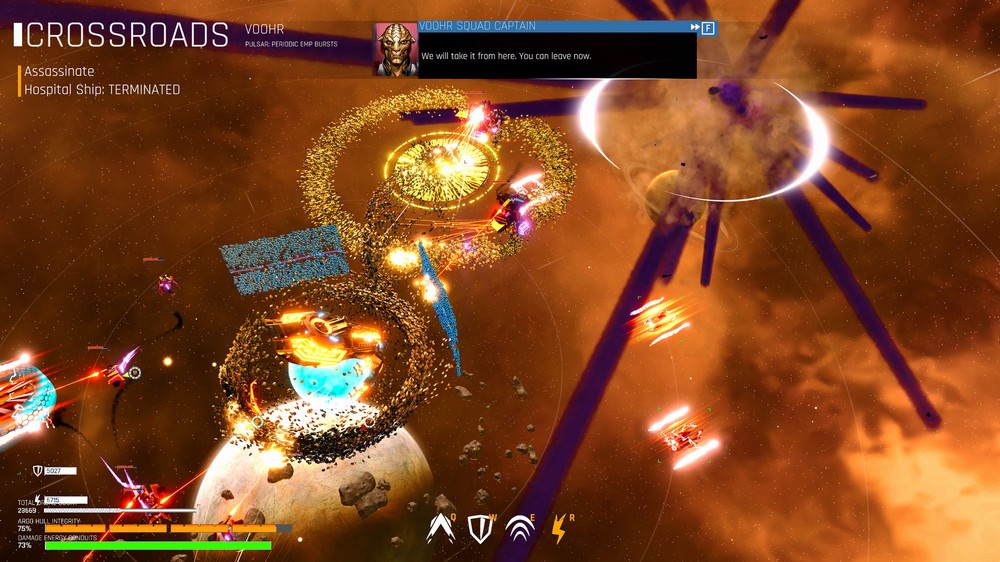 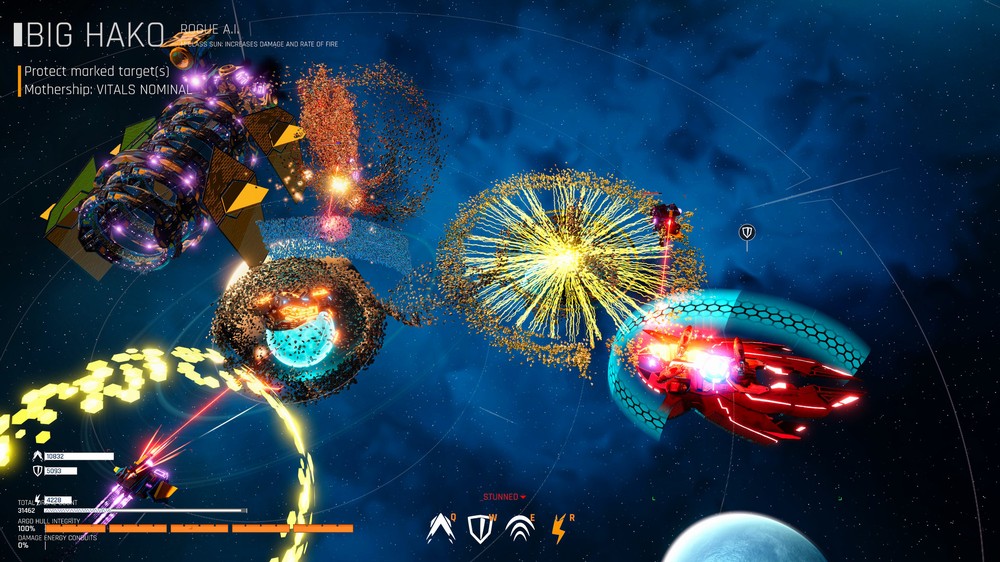 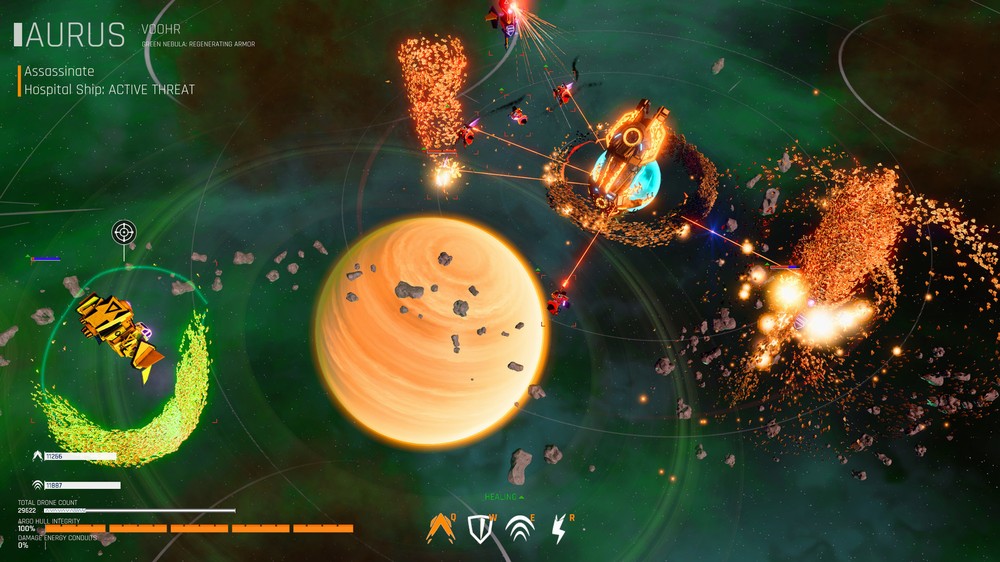