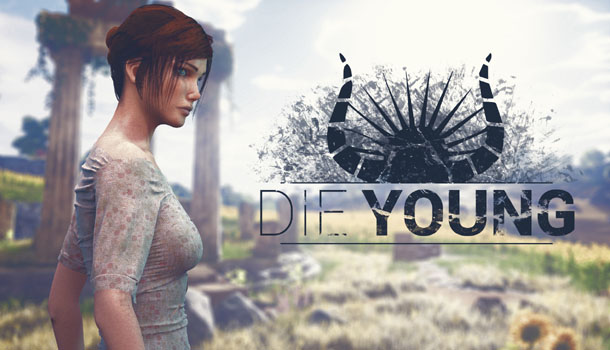 Dying Light meets Rust in this brutal quest for survival and escape.

Die Young has finally exited Early Access and we can now all enjoy one of the most brutally realistic and stunningly beautiful survival action-adventures of the year. You actually get two games in one with this purchase, as the final release also includes Die Young: Prologue, a smaller offering that was previously available for free as a standalone preview of the main game. Interestingly enough, the Prologue is almost nothing like the main game outside of some rudimentary resource gathering and crafting. Prologue had you escaping a sewer and making your way across a large island military base before making your way into the mountains for a final boss fight. The entire game lasted about 2-3 hours depending on how thorough you were in exploring every corner of the base and surrounding island, and Prologue also gave you a crossbow almost from the start, which encouraged more combat and interaction with your environment. It was a cool look at the tech the developers were working with but nothing like the main game we get today.

Die Young is first and foremost a survival game. You play as a young girl traveling abroad with friends only to find yourself kidnapped and left for dead on some mysterious Mediterranean island. When the game begins you are at the bottom of a well with only the clothes on your back and a crude map of the island to guide your quest; find your friends and escape the island. Your quest log will continue to grow the more you explore and there is even an itemized To Do list that breaks it all down with very specific goals, the first being to climb out of the well. 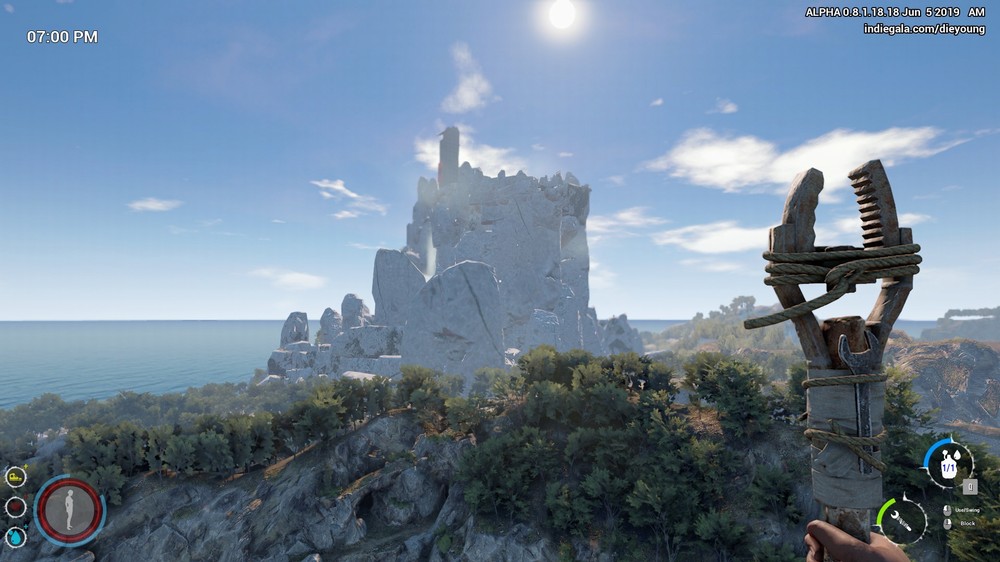 There is a lot of gathering in Die Young; everything from basic ingredients for crafting items to actual inventory like bottles (some with beer), canned food, sticks, and proper weapons. You’ll need to keep an eye on your health and hydration meters and keep those topped up while also monitoring your stamina meter that slowly depletes when your sprint and do fancy parkour moves. You’ll find recipes and even a pharmacy book that lets you craft healing items, but the struggle to survive is real. It was at least four hours before I stumbled upon the first of my dead friends who had been attacked by wild dogs. At least I was able to salvage her shoes, the first of several clothing slot items you can find and equip. Also, in that same four hours the best weapon I found was a police baton that I had to beat some insane stranger with a stick to obtain. Later, I did find a crowbar that gave me Half Life flashbacks, but the swing speed was too slow for regular use and was better for prying open padlocked gates.

Weapons have their own stats, so you might only get 3-5 swipes with a stick before it’s useless. Even after 3-4 hours my baton was still at half integrity. Inventory is limited at first but you can soon craft belts and backpacks to increase your item slots and you can equip four items to your quick-use D-pad inputs for easy switching in combat. Crafting ingredients don’t take up inventory slots but they do eventually reach a maximum capacity, and if your inventory is full you won’t be allowed to craft new items. 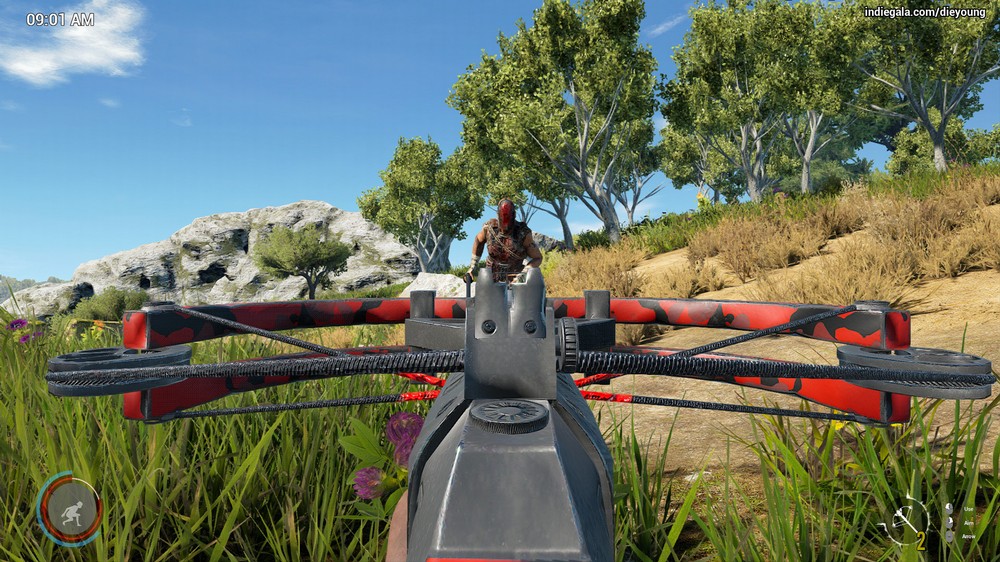 Die Young has its own internal clock that is much slower than real-life. Early on you are warned that you need to take shelter after 9pm but it could take 10-12 hours of gameplay before it ever gets dark. The clock seems to be advancing based on your completion of various parts of the game, which is fine because it is very easy to lose yourself in the exploration of this island. Aside from the map and To Do list there are no visible waypoint guides or UI to help you explore. You can track an objective that might put a shaded area on the map, otherwise you are left to wander the island at your leisure.

This lack of structure might not appeal to everyone but I found it surprisingly realistic, such as putting a giant scythe-wielding psychopath in the sprawling sunflower fields near the very start of the game; someone you won’t be able to defeat until much later in the game creating a whole new level of suspense when you are asked to explore those very fields in search of a canteen. Hearing this giant grunt and yell as he tramples the flowers, while you are crouched and sneaking about searching stacks of boxes is genuinely terrifying, and I admittedly jumped when I came up eye-to-eye with a snake and got bit. The game treated this encounter with so much realism that if you even disturbed the crows that were pecking away at the ground; the giant would rush over to investigate. 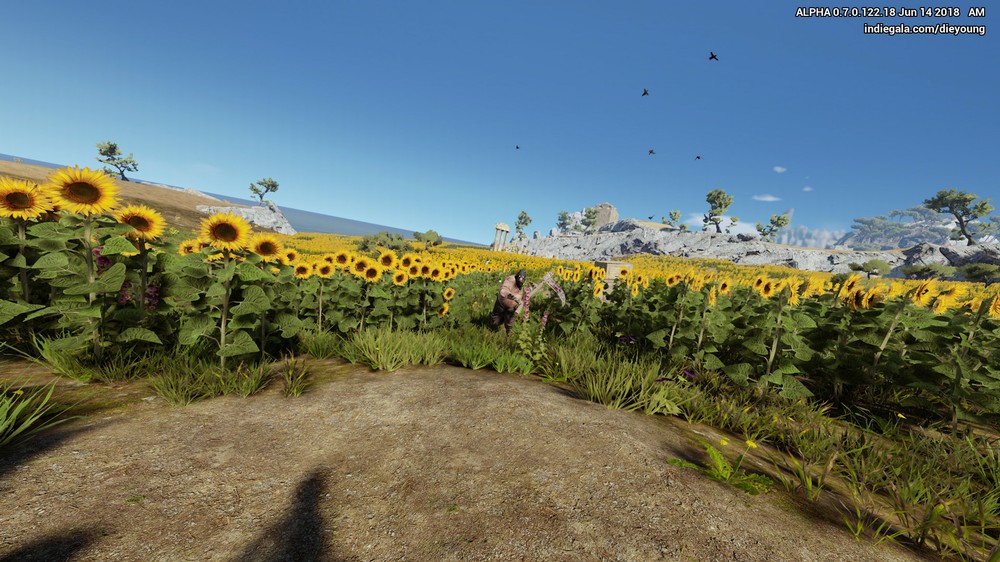 As you move across the map new areas open up and missions are added to your list. One of the first major missions is to investigate a farmhouse just up the hill from that aforementioned sunflower field. Something like this would normally be just a diversion in other games but in Die Young this farmhouse turned into an hour-long mini-adventure with so much exploration and climbing, while either avoiding a deadly pack of wild dogs or trying to beat them down one by one with a stick.

The 12km island in Die Young is a character itself, more accurately an enemy since your biggest struggle will be to survive the elements. Just navigating the landscape is a terrifying task, especially if you have issues with heights. The POV of the camera means you can either look down at your feet or where you are going, which can make some of these platforming jumps a true leap of faith with a dash of trial and error.   Many of the jumps require you to jump at the very last moment – usually one step past where your mind tells you solid ground is – and then pray you grab the opposite ledge.   Jumping, vaulting and climbing are generally pretty obvious with either white highlights on climbable edges or you can always use your Perception vision to make handholds glow orange for a short time. 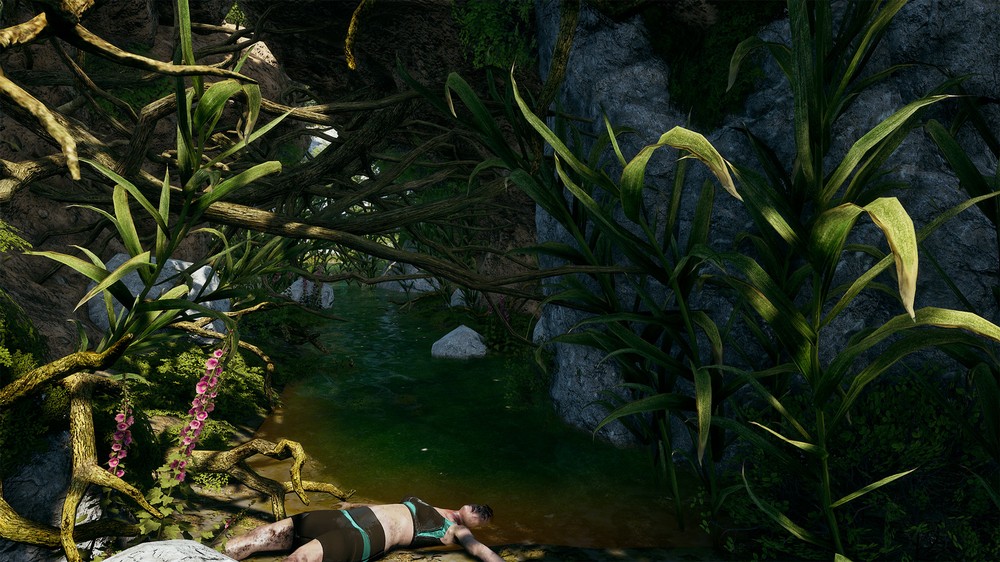 Perception is much like any other enhanced vision tool found in Batman, Tomb Raider, or just about any other game that involves exploration. You can trigger it when standing still and it will outline enemies and interactive surfaces in orange until you move again. It can be toggled off in the menu and it will be disabled in Survival mode. Those looking for a more moderate experience will probably want to go with Adventure mode and casual gamers can enjoy the stress-free Leisure mode.

The island is massive and takes hours to fully explore. Along the way you will unlock Shelters that serve as safe resting spots when it gets dark. There is also a shared Storage Box where you can deposit excess items and claim them from any other box on the island. And once you start unlocking these shelters you can use them to Fast Travel around the island when it comes time to complete any unfinished quests. Saving the game is easily done at various campfires around the island where you can save to any of three slots or quick-save to your current slot. You can also cook raw meat at these fires to create consumables.   If a campfire isn’t handy you can even craft your own if you have the raw materials to do so. 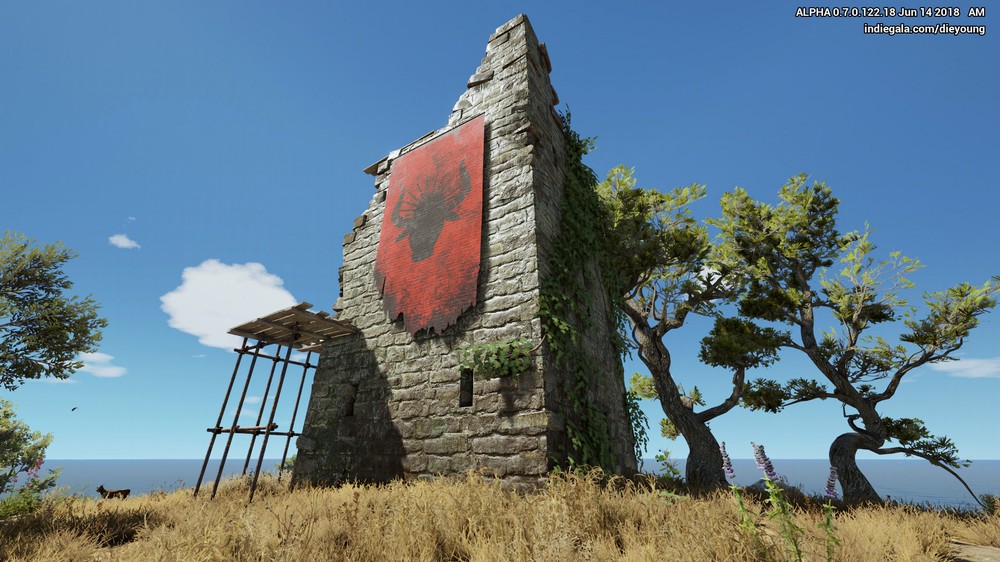 Die Young uses the Unreal Engine; a fact I learned when the game crashed about five hours in and I got a UE Crash Exception message. Thankfully that was the only crash and the rest of the game was surprisingly stable. Die Young supports 4K visuals and with all settings on epic, my RTX2080ti card easily delivered a locked 60fps. The draw distance is clear to the horizon with only minimal pop-up, and the various parts of the island seem to load seamlessly as you explore. Load times are minimal unless you are fast-travelling to a distant shelter that forces new assets to load. The menus, HUD, and UI for the game are minimal with small text indicators for various plants and button prompts for specific actions. While the game might lack the polish of a multi-million dollar franchise like Far Cry I was super-impressed with the scale of the island and the level of complexity in the landscape and the textures used to create a nearly photo-realistic look in several locations. Even the unique POV and the sense of speed when sprinting and the parkour camera added to the realism and made me wonder how this game would look in VR.

The audio package for the game kicks off with an awesome rock song for the title screen then everything goes eerily silent for the opening story panels. Sound resumes when you take control at the bottom of the well and from there it’s just an amazing surround audio experience that will encompass you in the sounds of life (and death) on this island. In one of the houses there were these wind chimes that would swirl around my home theater surround system.   The howl of a wolf, the growl of a dog, the insane ramblings of some violent stranger arguing with invisible parents about going to church, the frightening bellow of that temple giant, the crash of the surf, and the cries of the seagulls all create an engaging experience for your ears, but nothing is quite as sickening as the crunch of breaking bones when you miss a jump and plunge to your death, or worse; surviving and having to use a bunch of healing items to get back on your feet. Okay, there may be one thing worse than breaking bones. The screams of animals when you are beating them to death with a stick are horrifying. I’ll be haunted for months to come by the cries of that first fox I chased down while whacking with a stick only to have him roll over in a pool of blood with one leg twitching. 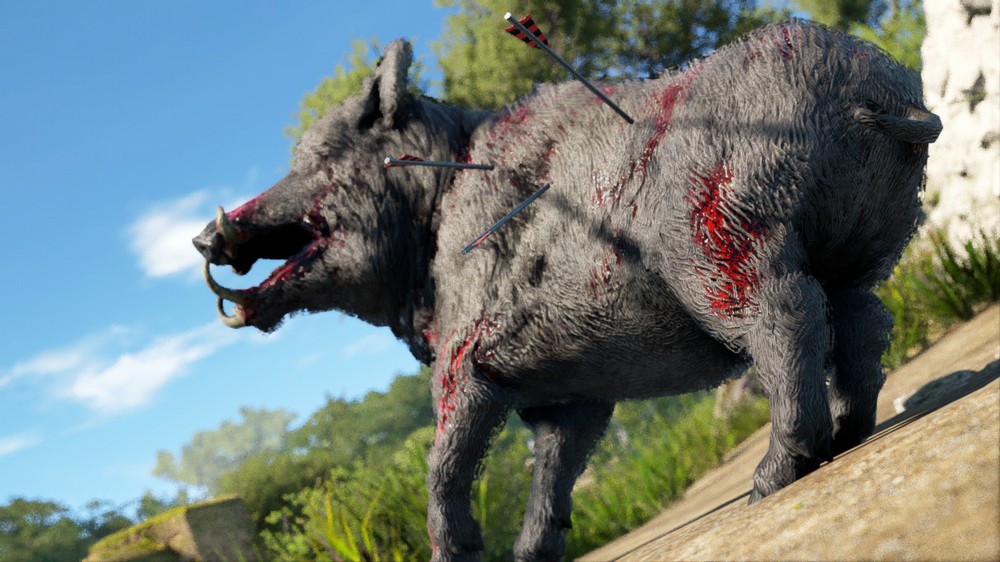 Fresh out of early access, Die Young has a few rough edges but these should be resolved over time with future patches.   Outside that one engine crash, the game ran flawless for me and I enjoyed almost every minute. As long as you save and save often you shouldn’t have to replay much when you die, and you will die. It’s even in the title. The Prologue is a fun addition as long as you go in knowing that its more combat that survival, and that the story told in the Prologue doesn’t really answer any questions for the main game; at least for many hours.

Die Young balances fun exploration and collectibles with the often tedious task of resource management and crafting. If you are a fan of diehard survival games like the last few Far Cry games or Dying Light then you will almost certainly enjoy the more straightforward approach to staying alive in Die Young. The story is minimal and the objectives are short and to the point, and the entire experience is geared toward you simply staying alive and surviving long enough to escape this island nightmare. 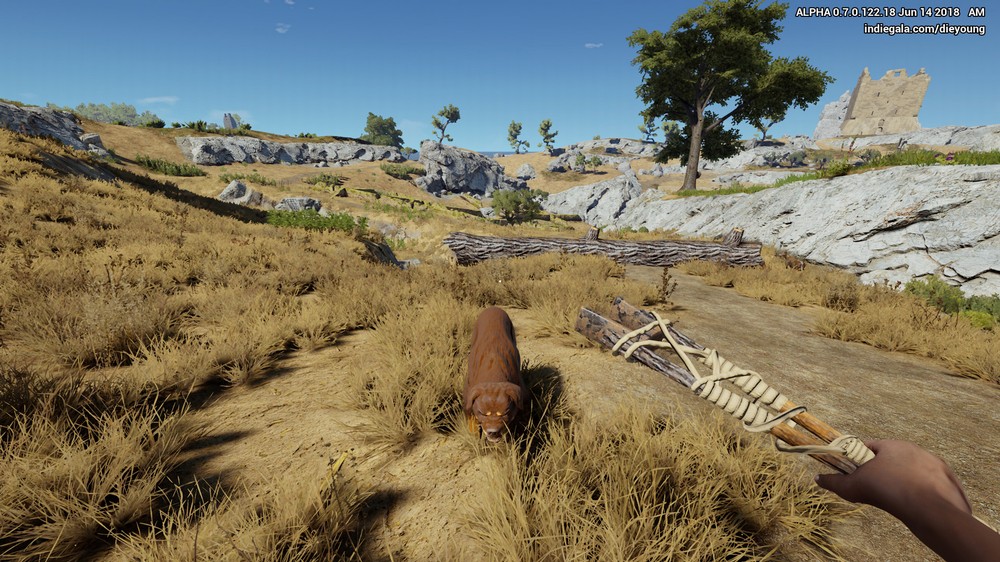 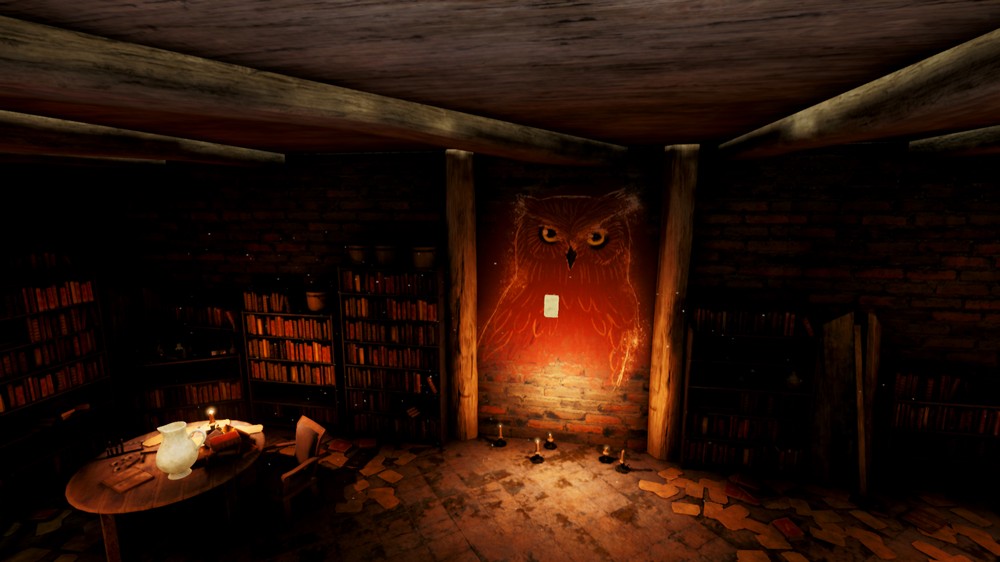 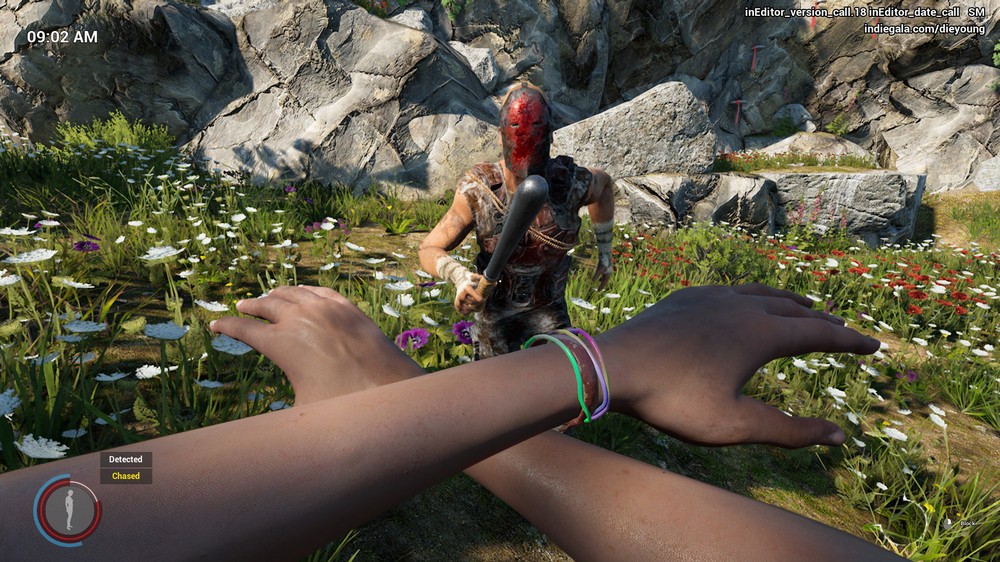