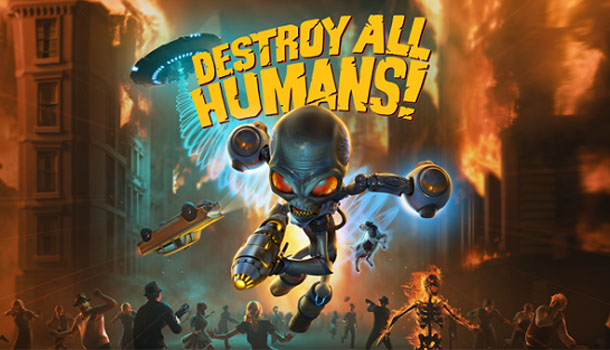 The best guilty pleasure you can play this summer.

It’s hard to believe it’s been just over 15 years since the original Destroy All Humans debuted on the original Xbox and PS2.  Sadly, I no longer have either of those consoles or my copies of that classic but THQ Nordic is here to save the day with a fantastic remake/reboot/upgrade (whatever you want to call it) for current gen systems and the PC.  Pandemic Studios and Black Forest Games have really outdone themselves on this remaster with a stunning visual update to some classic gameplay chaos.  Fans of the original are certainly going to want to step into the space boots of Crypto-137 while newcomers to the franchise are going to have a blast zapping, disintegrating, and anal probing the hapless earthlings you’ll encounter while trying to Destroy All Humans…and maybe some cows and chickens.

As far as storytelling, Destroy All Humans nails it from the opening cinematic that expertly ties in the events of this game with the infamous Roswell crash and Area 51.  Apparently this race of aliens has run short on DNA for their cloning program – their sole means of repopulation – and it seems these aliens have previously visited earth and gotten “freaky” so there is a bit of alien DNA in all of us.  Crypto-137 has been sent down to finish the job his predecessor started so many years ago, and with the help of a wide assortment of alien weapons and gadgetry along with a sporty flying saucer there is no end in sight to the carnage you are about to unleash. 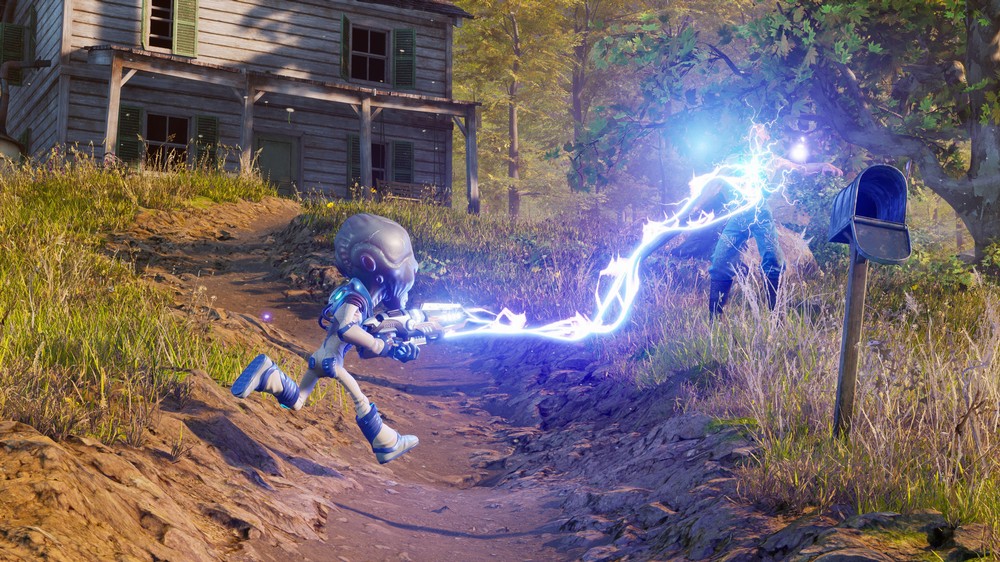 The overall presentation is fantastic with an authentic 50’s-style sci-fi aesthetic complete with title cards that look like drive-in movie posters as well as all the super-exaggerated cultural references of the time like Nixon and Ike, TV shows like Mr. Ed, and all sorts of movie star name drops you’ll hear in passing.  There is some awesome sci-fi music and great sound effects along with a lot of expertly delivered dialogue.

The main loop of the game stays rooted to the original.  You have a main story to follow that will take you across multiple chapters in unique environments starting at a farmhouse then moving to a county fair, then a small town political gathering, then off to a coastal beach town and more.  Each chapter will have specific goals along with one or more secondary bonus objectives that play out more like arcade challenges that will earn you bonuses when the mission is over.  The levels are massive and you’ll only explore a fraction of the area within the story mode, but you are free to return and explore these levels to find collectible surveillance droids or engage in various activities like rampage missions or harvesting brainstems within a certain time limit.  These challenges earn you up to three stars which earn you more bonuses. 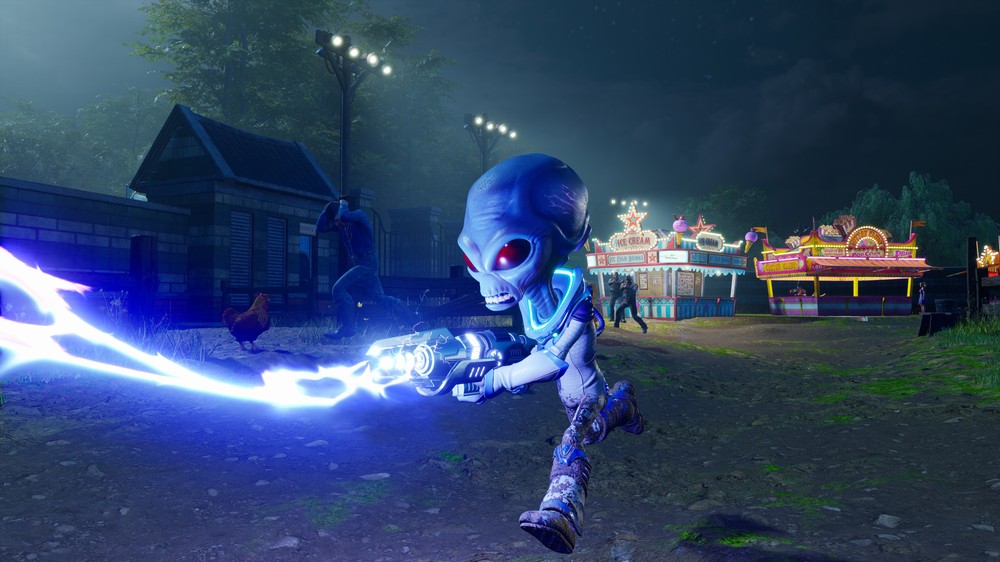 Crypto has some awesome weapons and gadgets starting with the Zap-O-Matic that will stun and eventually kill enemies.  This can be upgraded to chain off multiple targets for an impressive lightning storm effect.  The Disintegrator is my favorite only because it mimics the effect of turning its victims into a fiery skeleton that crumbles to the ground just like in the movie, Mars Attacks.  There are a lot of nods to that movie and others like Men in Black.  Crypto also has an anal probe that kills and removes brainstems simultaneously.  Harvesting brainstems is your underlying activity throughout the game, which is the only downside to using the disintegration rifle as it leaves nothing to harvest.  You also have mental abilities like Telekinesis, allowing you to pick-up and throw various objects around as well as the ability to read minds, hypnotize people into doing your bidding and perhaps the most useful ability, assuming their identity.

A big part of Destroy All Humans is stealth with various levels of restricted access through the missions that will require you to find a person with access to those areas and assume their identity.  This holographic disguise must constantly be refueled by probing other minds along the way and you are unable to do anything alien-like or risk revealing your true identity.  In one instance you’ll need to be a policeman to get past a roadblock and another time you’ll need to be a soldier to enter an army base.  Some missions require you to be in stealth the entire time and a single sighting will result in failure and restarting from scratch.  It gets even tougher when the MiB show up and setup EMP devices that can disrupt your disguises. 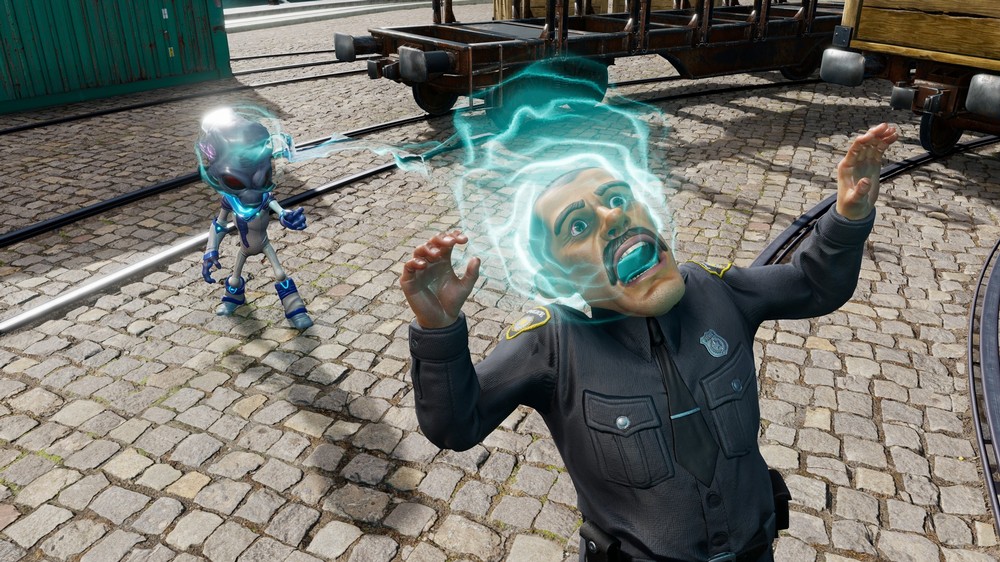 The game’s wacky humor and visual style along with its chaotic gameplay reminded me of Saints Row IV; especially the levels in that game that took place in the 50’s sitcom level.  There is that subversive style of twisted gameplay and irreverent humor buried in every facet of the design and dialogue.  Probing minds is the ultimate eavesdropping tool, and some of the characters in Destroy All Humans are pretty outrageous, although the bits of random dialogue did start to repeat by the third mission and became mildly annoying.

When you are tired of ransacking the earthlings on foot beam into your trusty flying saucer and unleash carnage from the skies with a death ray that scorches the earth and explodes buildings better than the Independence Day movie.  You can also use a tractor beam gizmo to lift up object and throw them into others.  As with Crypto, your saucer has a robust set up upgrades available to help you get through the later stages.  Whether on foot or flying around, the carnage is epic fun and totally awesome with a great progressive difficulty that balances perfectly with your tech trees all fueled by collectible DNA currency. 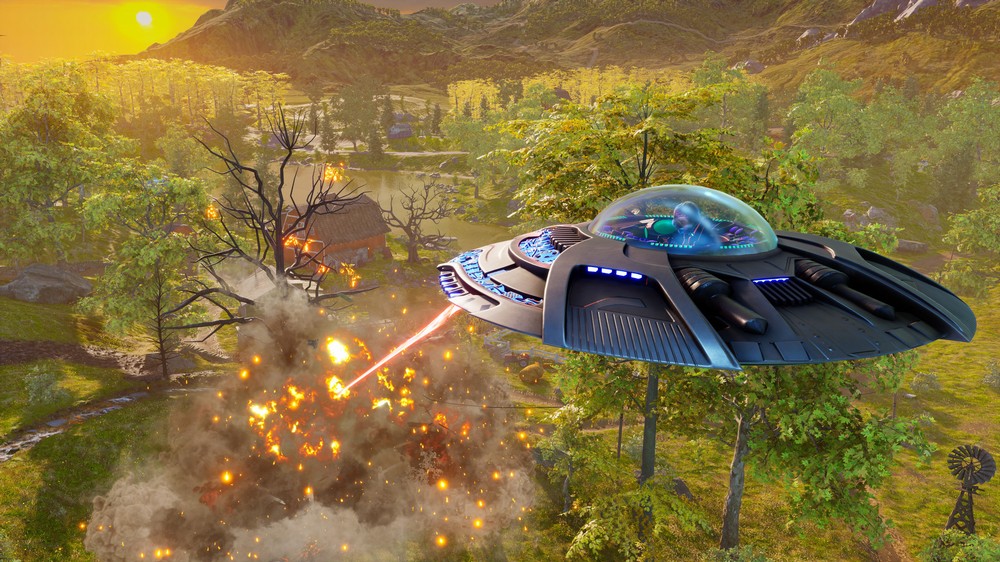 Destroy All Humans looks amazing with loads of detailed textures and fantastic environmental art design.  The game runs smooth in 4K/Ultra, but there is considerable pop-in when flying around in the saucer.  I tried various lower settings and even dropped the resolution to 1440p but the pop-in persisted.  On foot the game is nearly flawless, even when jet-packing around the levels. My one major complaint that still persists even after a few updates and patches is that the subtitles go off both sides of the screen so you miss a lot of words on certain lengthy dialogue bits.  It’s not a huge deal unless you need subtitles or are streaming the game, but it is annoying that this somehow slipped through QA.

Destroy All Humans is one of the best guilty pleasures you can play this summer, and with a fresh visual look and improved controls and gameplay there is enough content here to keep you pillaging the planet for weeks and months to come, and it’s only $30.  If you loved the original or maybe never even heard of this game until now, you definitely want to get a copy and unleash the alien invasion today. 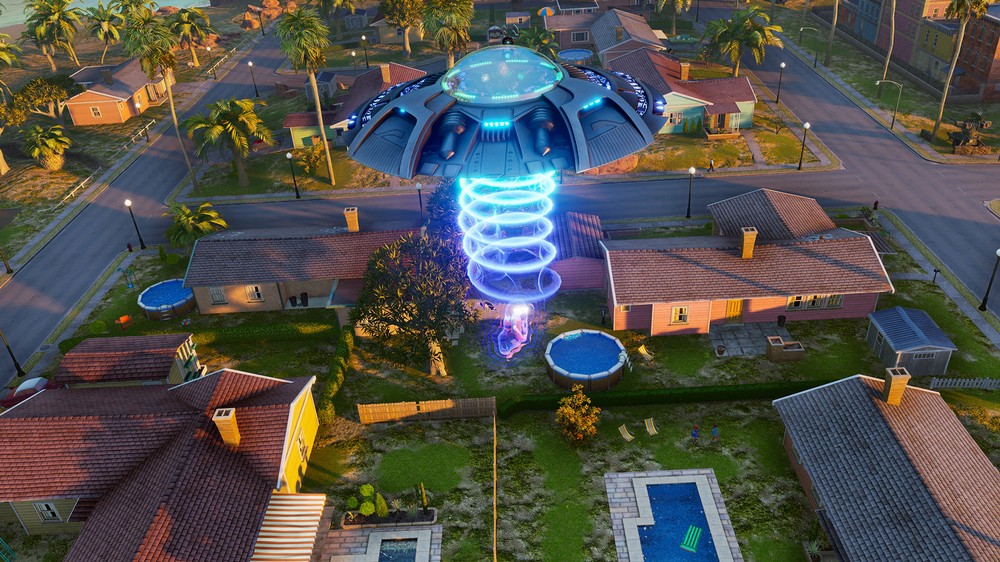 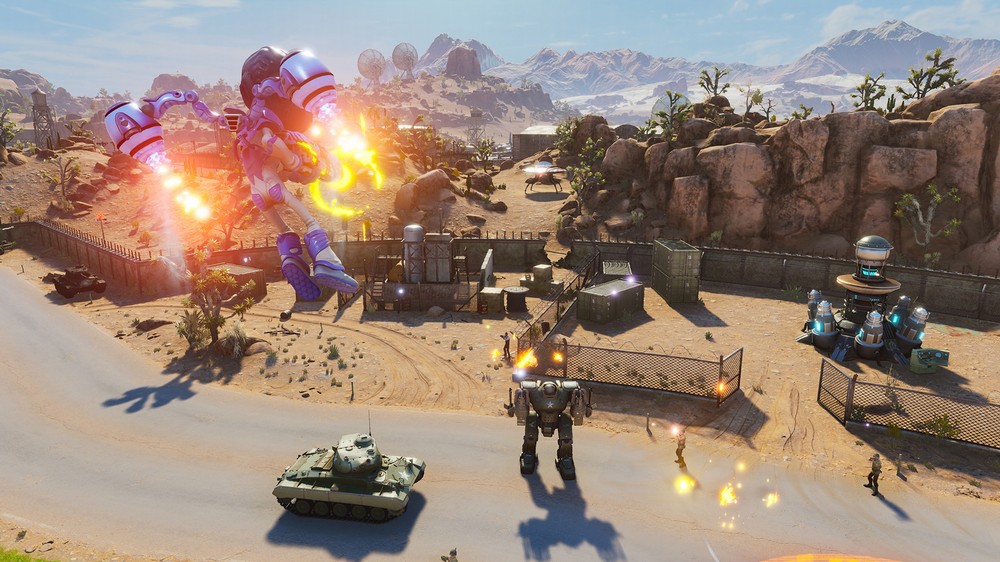 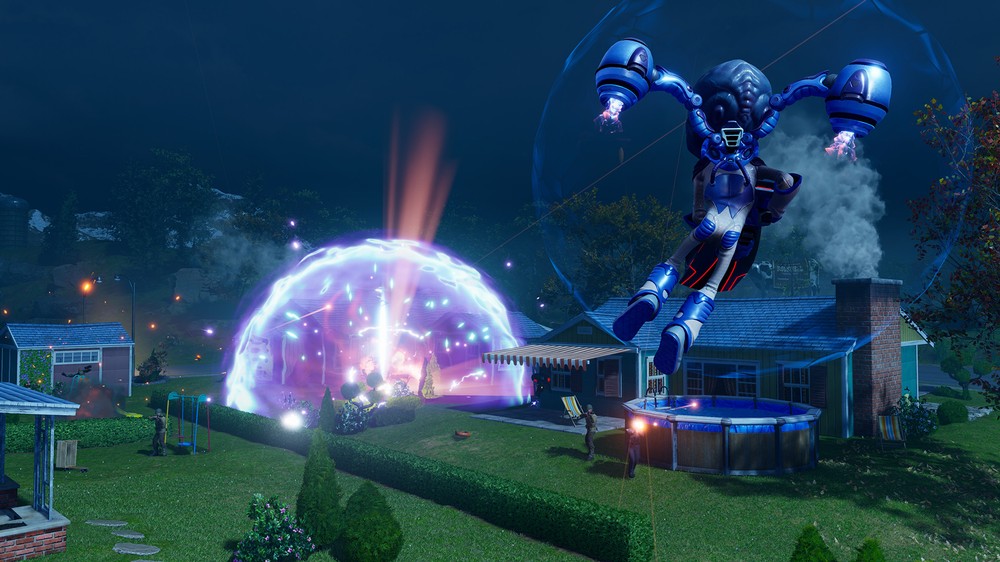 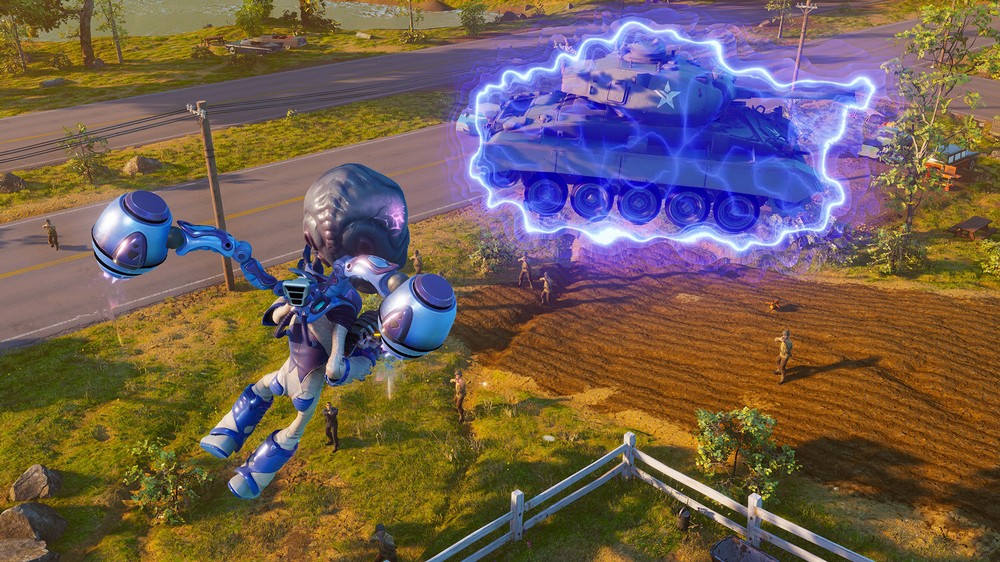 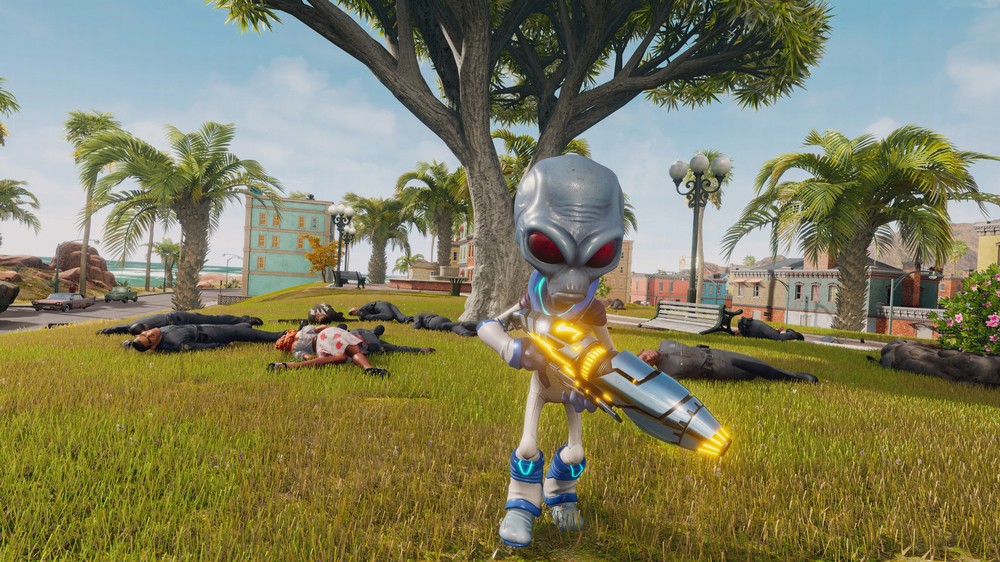