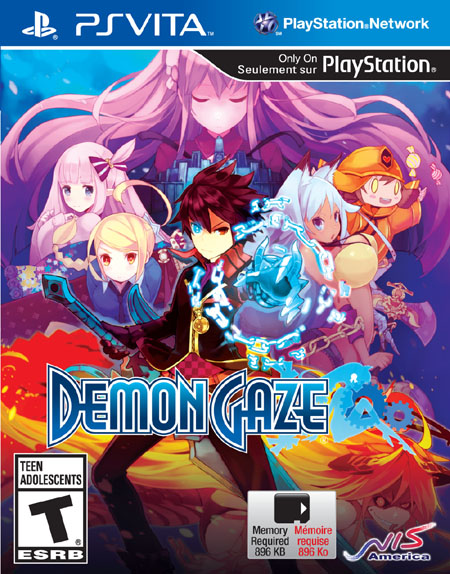 Early hours of the game tough to get past, Minimal story, Fan service a potential turnoff

A fun and enjoyable dungeon JRPG with enough old-fashioned RPG elements to keep you entertained in small doses.

After playing and reviewed numerous NIS published and or created titles, I’ve learned to adjust to the left field antics and humor that comes with them. So imagine my surprise when Kadokawa Games (notable for releasing games like Lollipop Chainsaw and Killer is Dead) teamed up to make a game as both companies are known for some interesting and outlandish titles. Throw in a company called Experience Inc. who mainly releases titles in Japan and you get the latest JRPG experience Demon Gaze for the PlayStation Vita.

Experience Inc.’s lack of stateside releases is probably one reason that I’ve never heard of them or the fact that Demon Gaze is set in the same universe as their Students of the Round predecessor though thousands of years later. Demon Gaze did however pique my interest as its core gameplay mechanic is that of a first-person turn based dungeon crawler much in the vein of games like Etrian Odyssey or Unchained Blades.

Players assume the role of Oz, the amnesiac young man who has the power of a magical eye that gives him the ability to defeat and seal away demons. After selecting Oz’s looks and voice, which can lead to some interesting choices as you are always considered male, you are dumped right away into a dungeon that’s inhabited by a demon. Eventually after being creepily toyed with in the maze you find and defeat the demon with the small aid of Lancelorna, the first of many busty woman that you find on your trips into enemy infested areas. After that you step out of the basement of the Dragon Princess Inn where you are quested in defeating and collecting more demons and oh…paying rent for you and your party members. 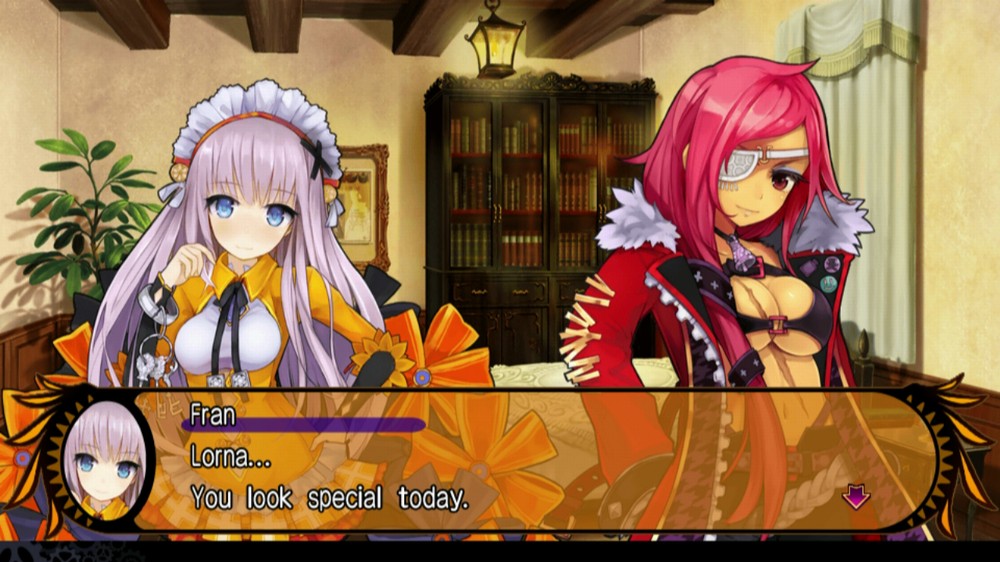 Beyond that somewhat bizarre yet classic JRPG reasoning, Demon Gaze is a classic dungeon exploration adventure that takes place in various locations like Red City or Slave Grave, between the fan-service bits, where you navigate grid based paths in search of treasure and more importantly Demon Circles. Utilizing the left stick to look around in any of the four cardinal directions and the right stick to strafe allows you to navigate the city streets or deep dungeons towards your objectives. In each location there is at least one main demon that you need to defeat and capture like Mars or Chronos earlier on besides the random encounters that act as a means to get stronger to actually beat the main Demons.

This is where a seemingly simple JRPG actually gets a little bit deep as it actually pays to take on the 10 demons that you can utilize in battle in a particular order. While you can attempt them in any order as new areas become available, I found that certain abilities gained from having a demon with you to be incredibly useful such as beating Mars to gain her Attack Buff before tackling Chronos. Each of these named Demons has an innate ability to interact with the world around them. For instance the easily defeated first demon, Comet, has the ability to sense hidden areas if equipped which you can then kick open to reveal their secrets. As all demonic things go having them around comes at a price. 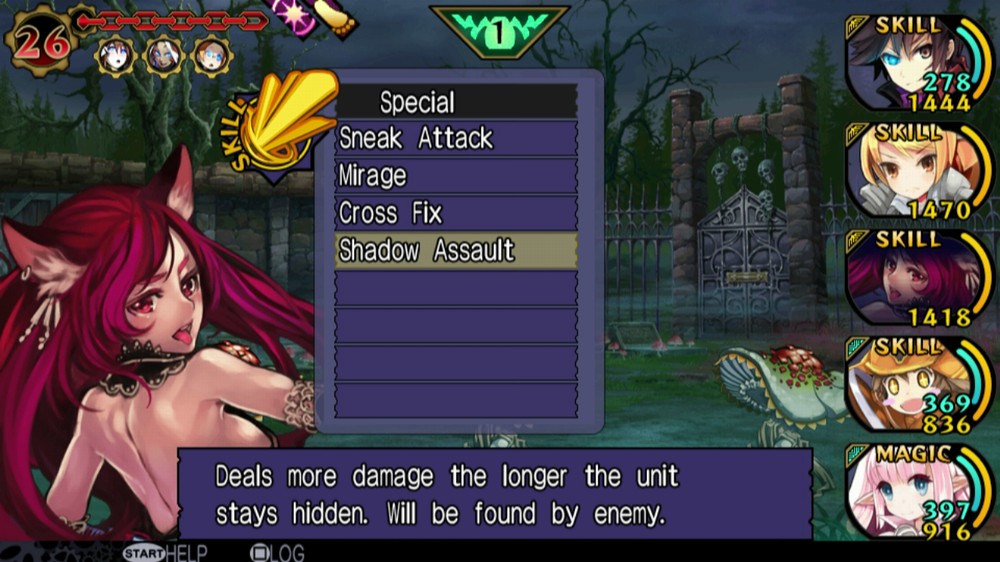 The turn-based combat in Demon Gaze is actually quite simple as JRPGs go but it’s the use of demons like Comet that really spice things up. The player can call these demons into battle at anytime to aid you acting as an uncontrollable extra party member. The trick is that while they can be quite useful for dealing out damage or healing you party members at times they are a ticking time bomb waiting to happen. Each demon has a gauge that once depleted will send them into a rage that may help you but could also spell your doom as no side is safe from their destructive nature. Keeping a close eye on the gauge could be the difference between a sweet looking girl on a broomstick and a furry wanting to rip your head off. If a demon is sealed away it will recharge its gauge giving you more time to use them later on.

The aforementioned Demon Circles don’t show up however until you clear out and control all the other randomized circles in the area. These circles allow you to lay down items from three different categories in a chance to be rewarded with better gear, weapons and items after taking on tougher than normal opponents. Circles besides being nice cash intake points also function as save spots and demon key swap points while out in the field. If the items you get are no use to you or your party than they can be sold to buy things that are or more importantly to pay rent every time you return to the Inn. Being able to pay rent will determine what areas of the Inn are accessible to you and how strong your party can be in numbers when you head out and for the first few hours of gameplay managing this is easily one of the biggest time consuming features that Demon Gaze has. 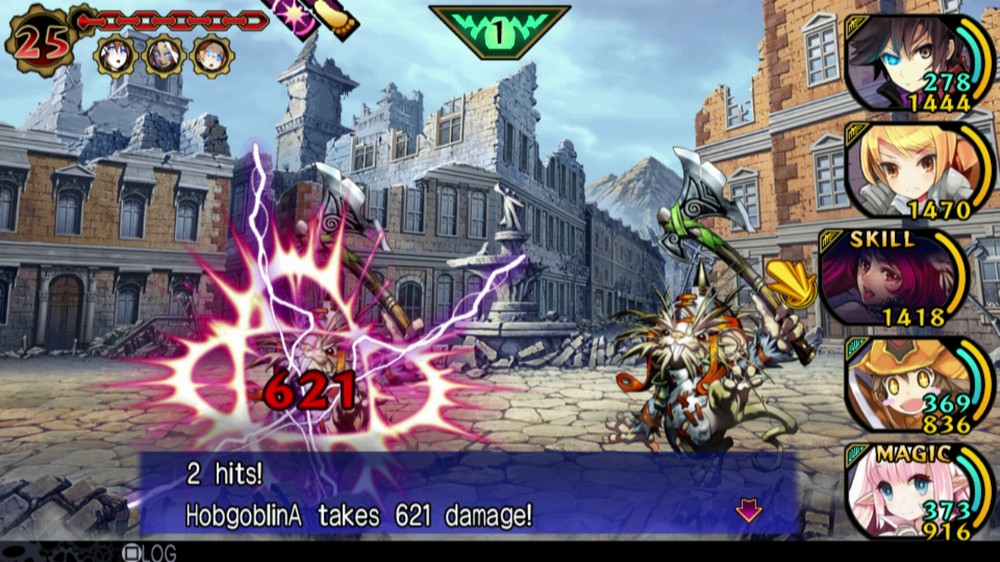 To make Demon Gaze a bit more accessible or easier to potential new players or veterans of this not very often seen style of RPG, the developers put in some nice features to aid you along the way. For starters, they took a page from the Souls series allowing players to leave potentially helpful messages behind to warn others of impending dangers. You can only view these messages if you have your Vita connected to the internet though you many just save yourself from reading the slew of messages detailing which of the scantily dressed NPCs is the hottest. No I am not making this stuff up. There is also the ability to choice a previously found area in a location to fast travel to with the touchscreen if you don’t feel like doing it the old fashioned way.

The gameplay of Demon Gaze may be old-school but it’s wrapped in a mostly clean and cliché filled visual shell. The portable games market can’t necessarily have the biggest visual package but the JRPG market always finds a way to make its still character models, story moments and HUD sharper than ever. Thanks again to the Vita’s OLED screen (on the original models) nearly everything looks really good save for the finer details in the locations you visit. The turn-based combat animation is pretty basic featuring mere character wiggles and slash marks to emulate attacks like many older RPGs. The main character you play is called the Demon Gazer and thanks to the over-obvious fan service that this adventure provides one could wonder if that isn’t the only meaning behind his name. While the is a varied mix between male and female character models it’s also extremely obvious just what demographic Demon Gaze is targeted at as you will more times than not see many of the main cast of characters(mainly females though not exclusively) in some state of undress. 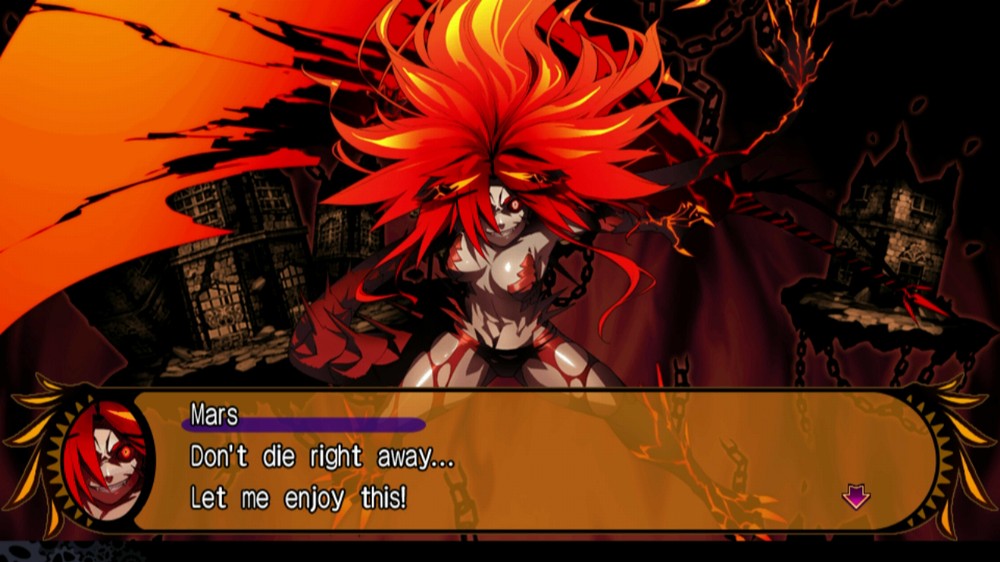 While the over sexualized models may be a turn off for some potential players what isn’t a turnoff is the score and voice work featured in Demon Gaze. While the game isn’t completely voiced there is a good deal of voice acting to be heard within as it features both an English and Japanese voice track as well as the ability to choose to read the game in either language. Its sound effects and score however are my favorite part of the experience. The moment you start the game hearing the cackling and unseen attacks on the first person you meet is chilling. The score composed by Naoaki Jimbo, who composed Demon Gaze’s predecessor, is actually quite enjoyable to listen to as you play.

When it comes right down to it, Demon Gaze is a fun and enjoyable dungeon JRPG that while being a huge fan service has enough old fashioned RPG elements to keep me entertained in small doses. The Vita is once again used to present the player with another visually appealing experience with an awesome score. If you like games in the style of Etrian Odyssey then look for Demon Gaze in retailers near you or digitally via the PlayStation Network today. 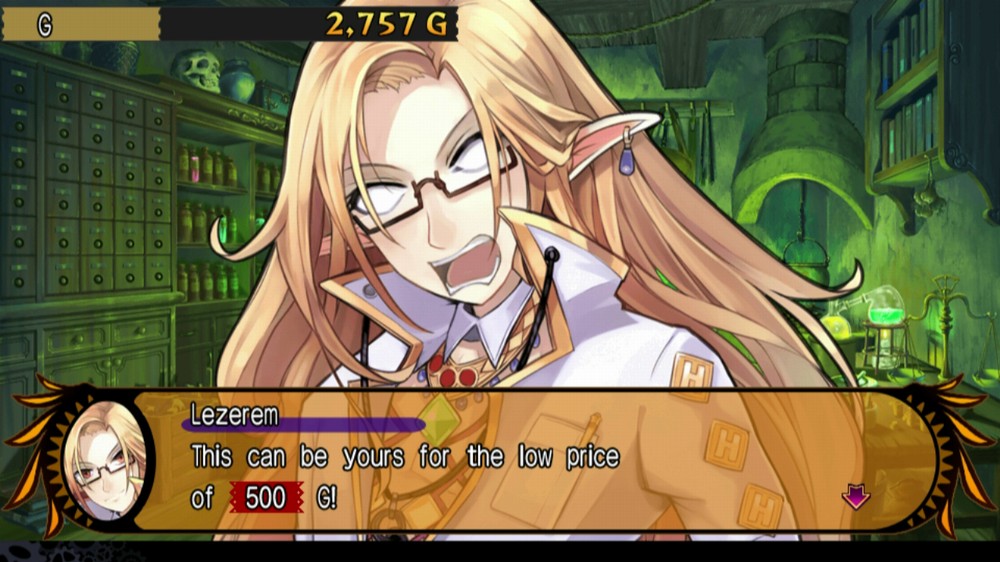 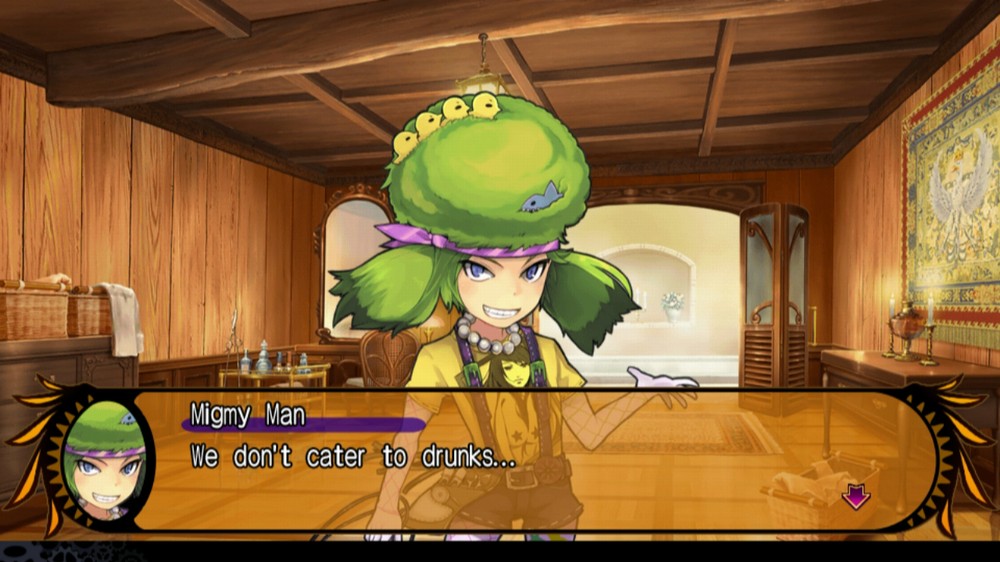 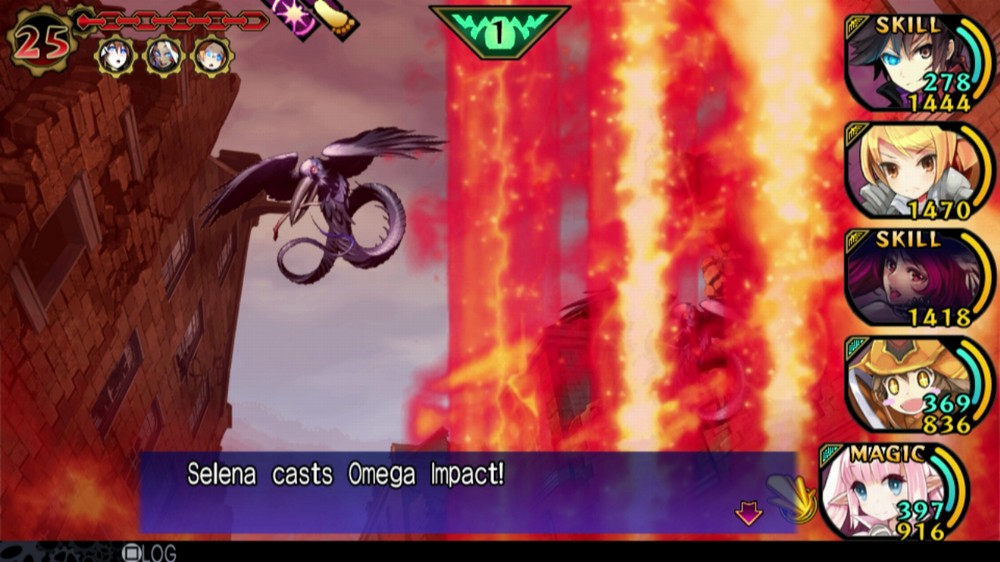 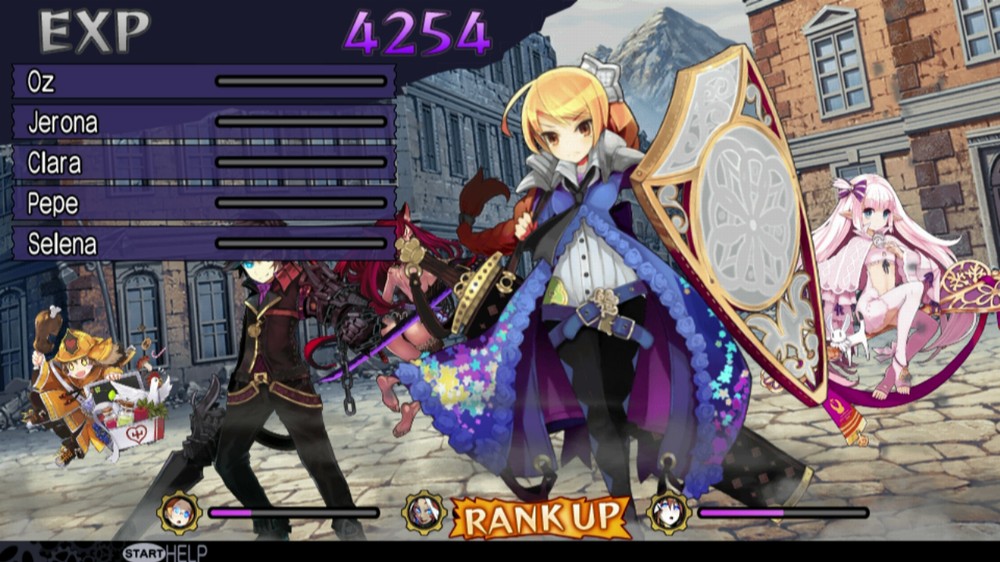 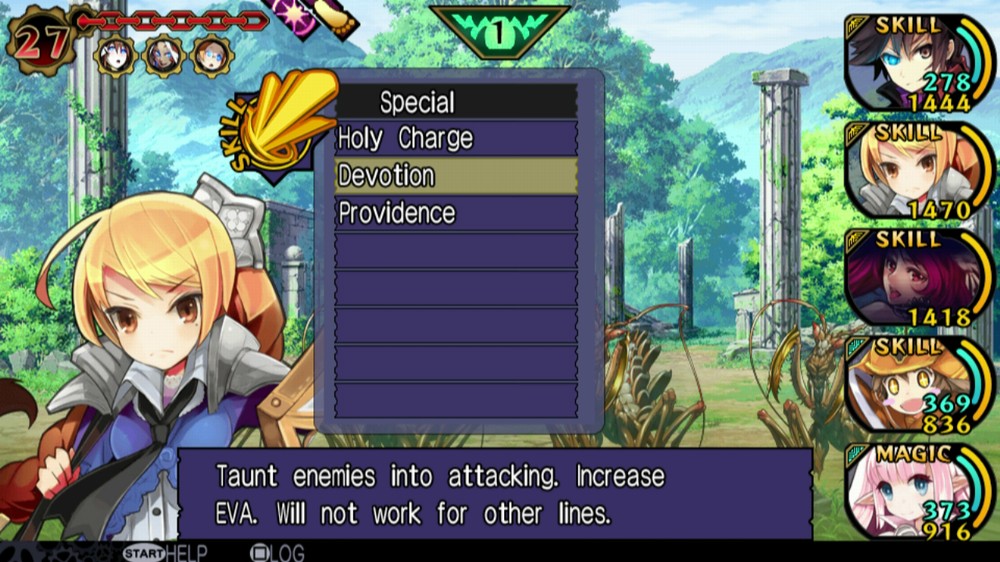 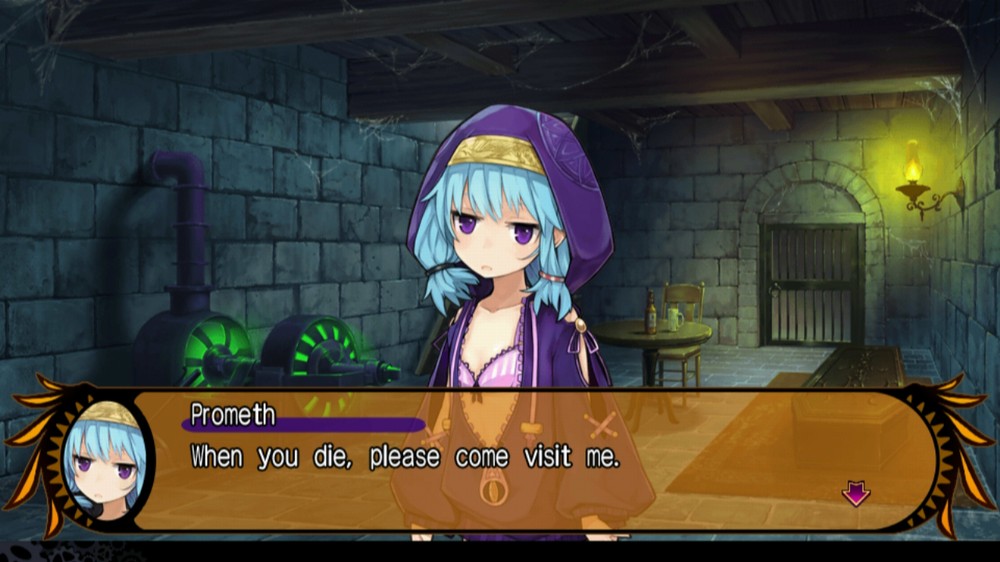 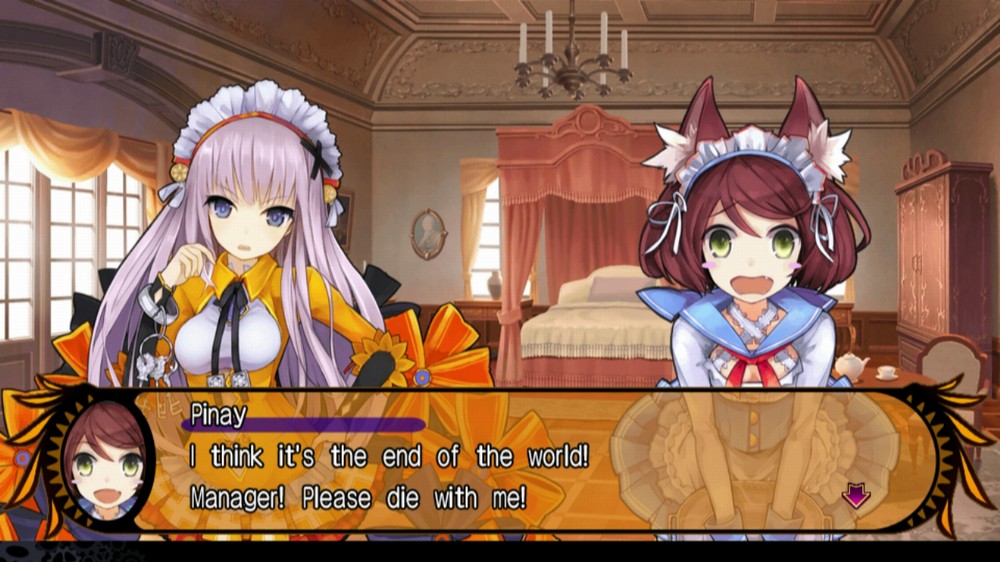 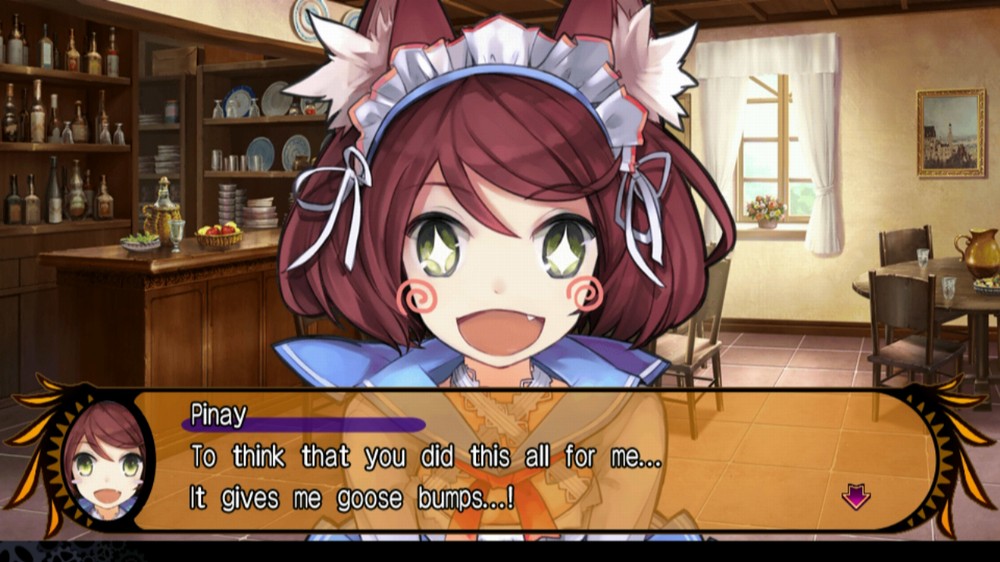 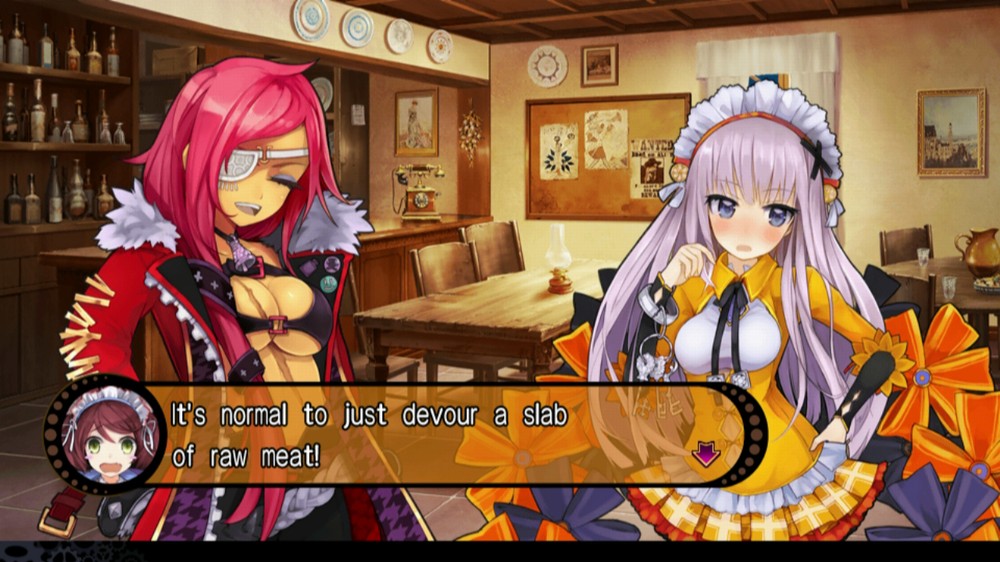 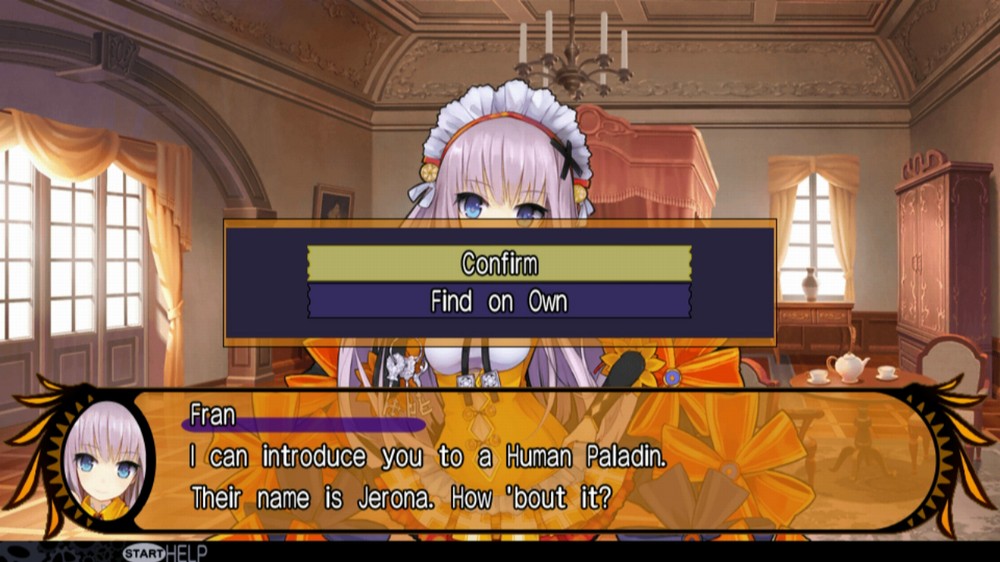 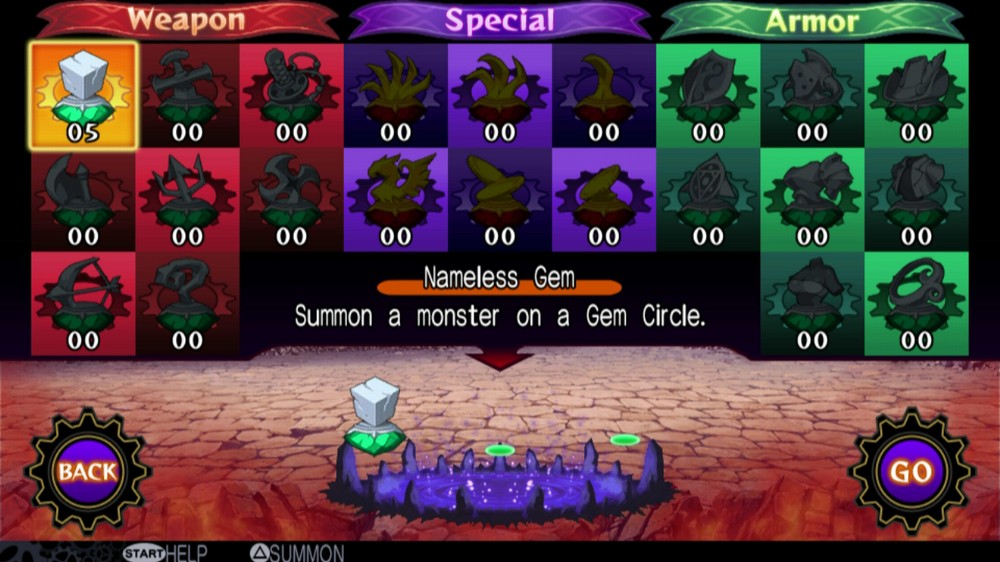 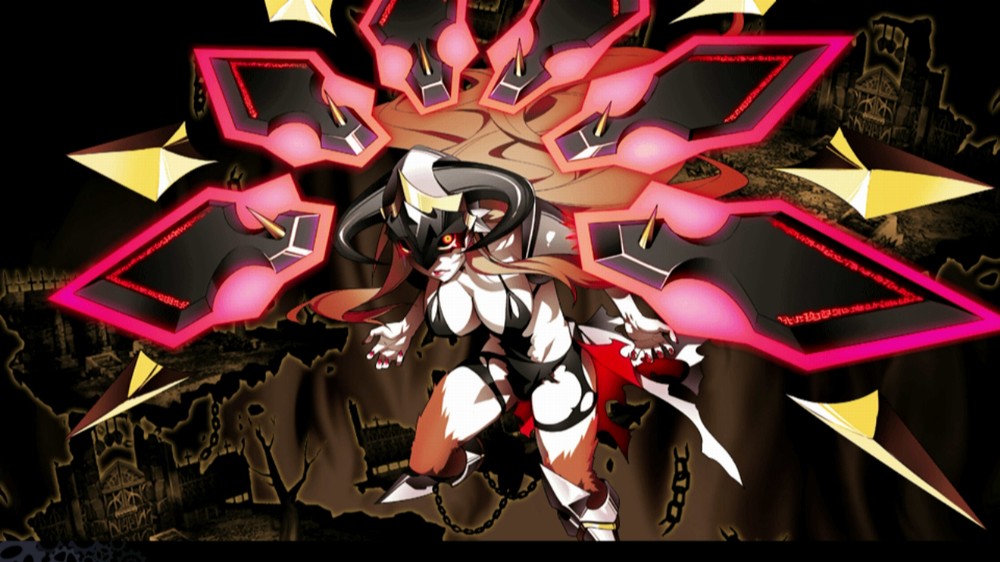 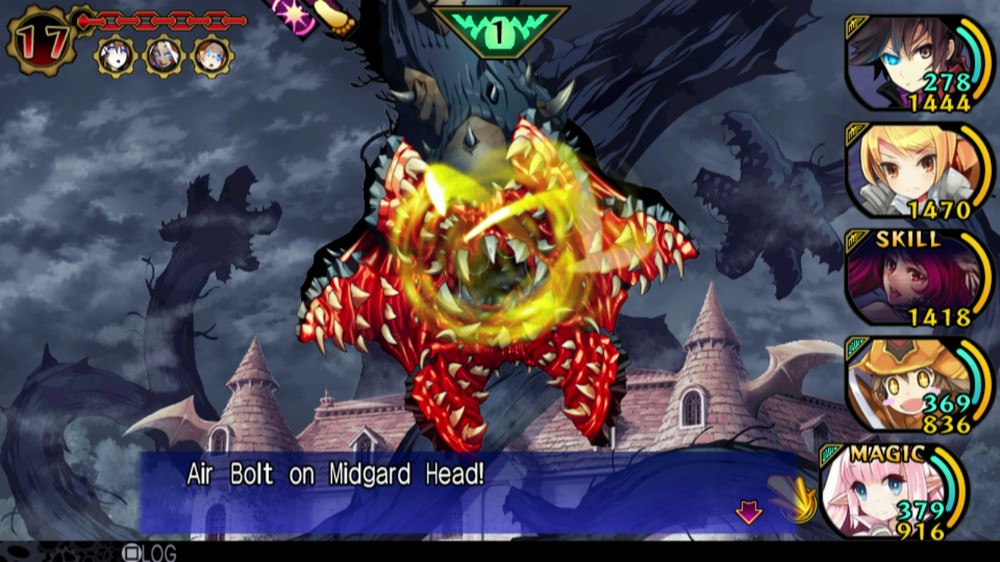 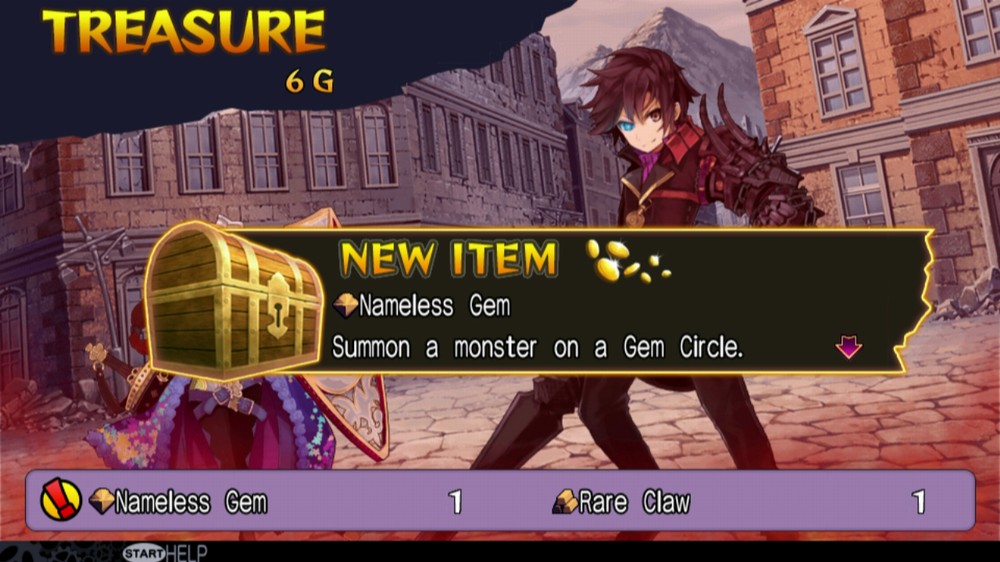 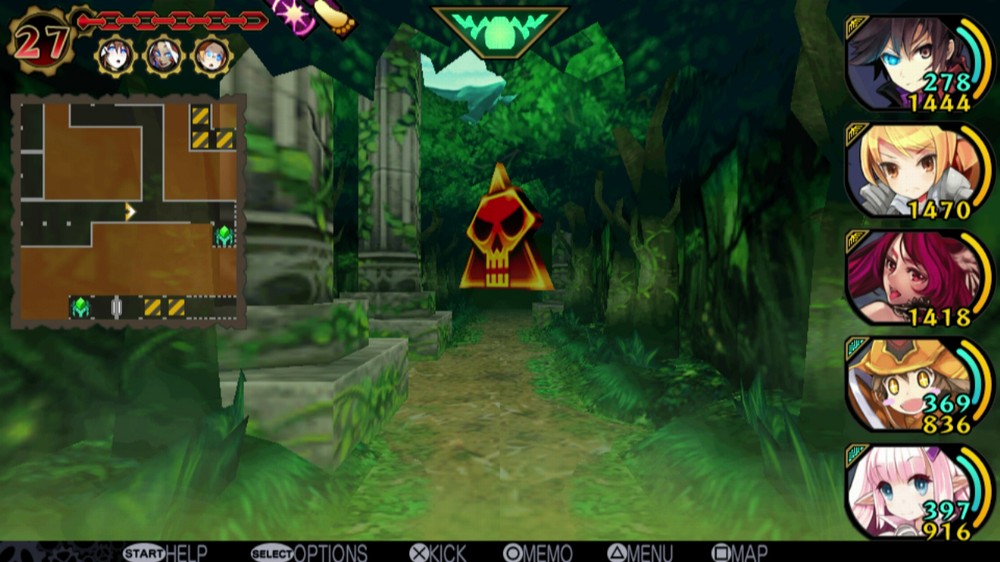 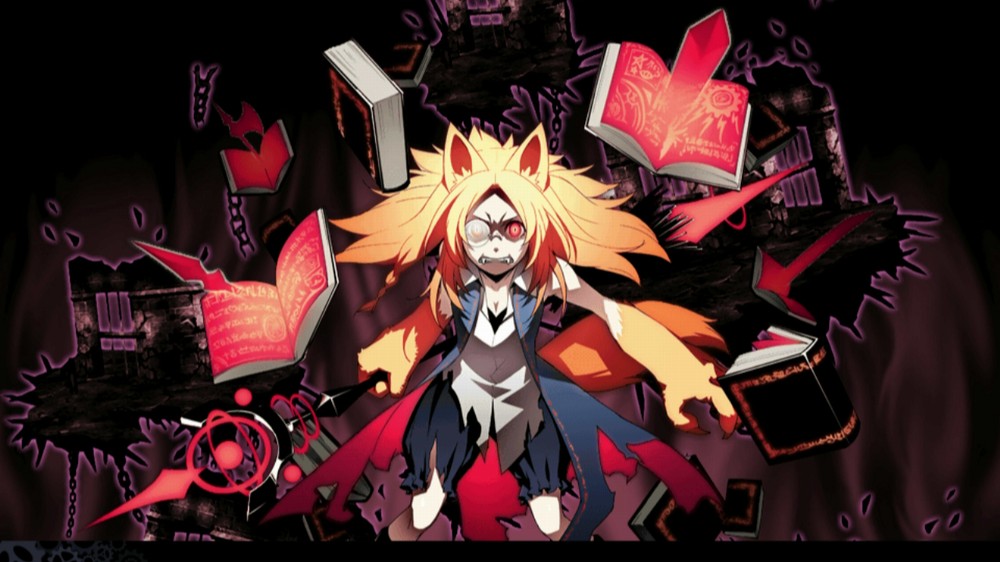