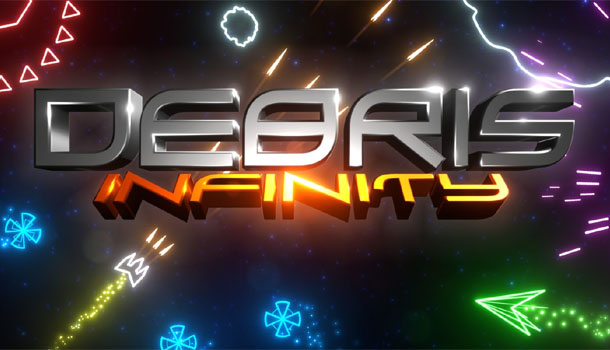 A colorful, neon, vector graphics version of Asteroids with hints of Geometry Wars.

Originally released to Steam Early Access in late 2017 (and still in Early Access as of this review), Debris Infinity has made its way to the Xbox One after already seeing a bit of success on the Nintendo Switch. Honestly, this was the first I had ever heard of the game, but loving shooters as much as I do I was more than happy to check out this latest version which included some exclusive improvements for the Xbox including; Leaderboards and Achievements and some enhanced graphics for the Xbox One X with new particle effects all running at a smooth 60fps at 4K resolution.

Debris Infinity offers three modes of play and every one of them is exceptionally fun in its own way. Time Attack, Power Wave, and Normal modes are all self-explanatory, guaranteed to fit whatever mood you are in, and each have their own rankings and leaderboards. The scoring system is unique with an emphasis on chaining combos while simultaneous navigating your ship out of danger and shooting enemies as soon as they appear on the screen. 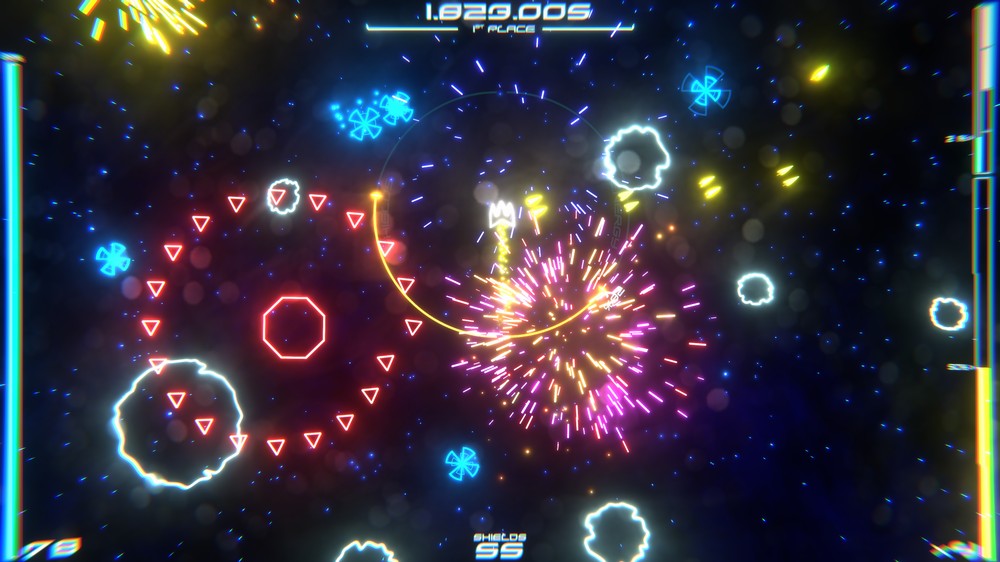 With only a single life, the games are relatively short compared to other arcade shooters. The Time Attack does give you a three minute timer and Power Wave is also on a time limit but you can earn bonus seconds by clearing waves. Normal mode will last as long as you can stay alive, which does seem to improve the more you play and hone your reflexes. There is a bit of luck in Debris Infinity, but there is also a lot of strategy in mastering the surprisingly in-depth scoring system to achieve the highest scores.

At the core level Debris Infinity is basically a colorful, neon, vector graphics version of Asteroids with hints of Geometry Wars. The level of intensity experienced while playing is matched only by the level of satisfaction you feel when you beat your previous score and slowly rise up the leaderboards. Debris Infinity is the very definition of arcade goodness to the point where you will likely want to team up with a friend for some quality co-op or versus action. 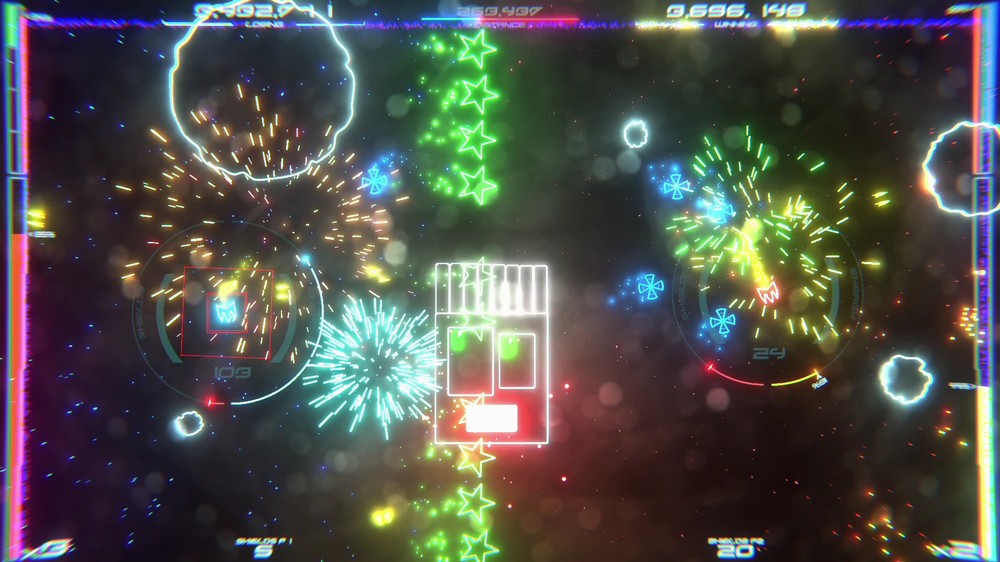 The graphics are mind-blowing with all sorts of shapes and colors that will overload your brain and your screen. Even the way the leaderboards swoop in and crawl the screen is awesome. Thankfully, there is a slow-motion feature that you can trigger to get out of a jam with nimble movement and precise controls or just unleash a bullet storm before normal time resume. The EDM/techno tracks are perfectly suited to the visuals and the action and can easily be summed up by a single word, “groovy”.

My only issue with the game is the default sound mix.  The entire game is super-loud (twice as loud as any other game on my Xbox) forcing me to turn my Denon receiver from -24db to -42db, and even then the mix is terrible.    Basically, all the stuff you don’t want to hear is 10x louder than the stuff you don’t, and it took me 15+ minutes of experimenting with sound levels to find the perfect mix.

By design, Debris Infinity is an accessible game, perfect for those short bursts of gaming when you don’t have a lot of time or equally as perfect for your next game night when you can team up or pass the controller around and go for those high scores. And with graphics as cool as this, watching Debris Infinity is almost as much fun as playing it. It’s certainly less stressful. I’d love to say more, but the game is fairly straightforward in concept and presentation and if you enjoy games like Geometry Wars then you are probably going to enjoy this. 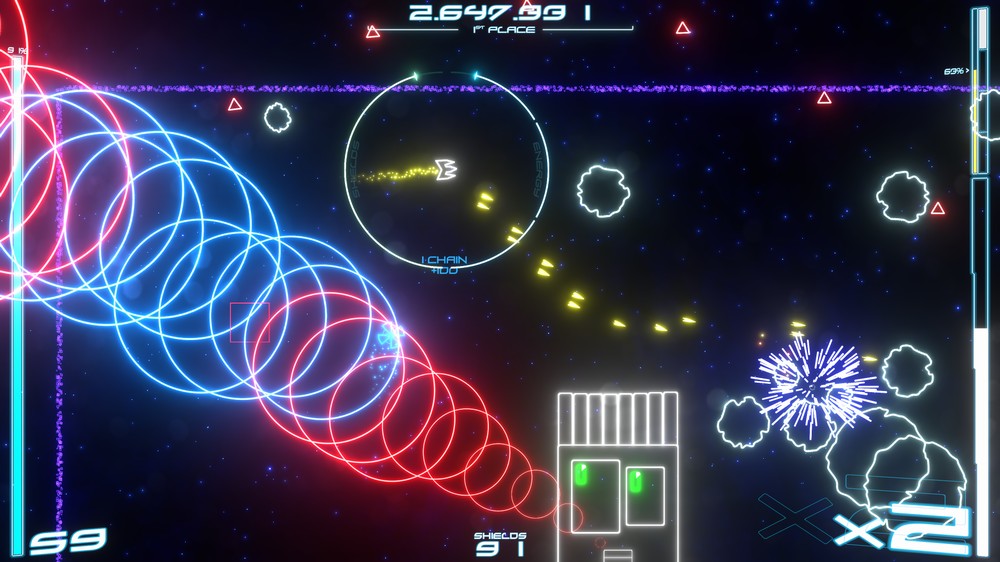 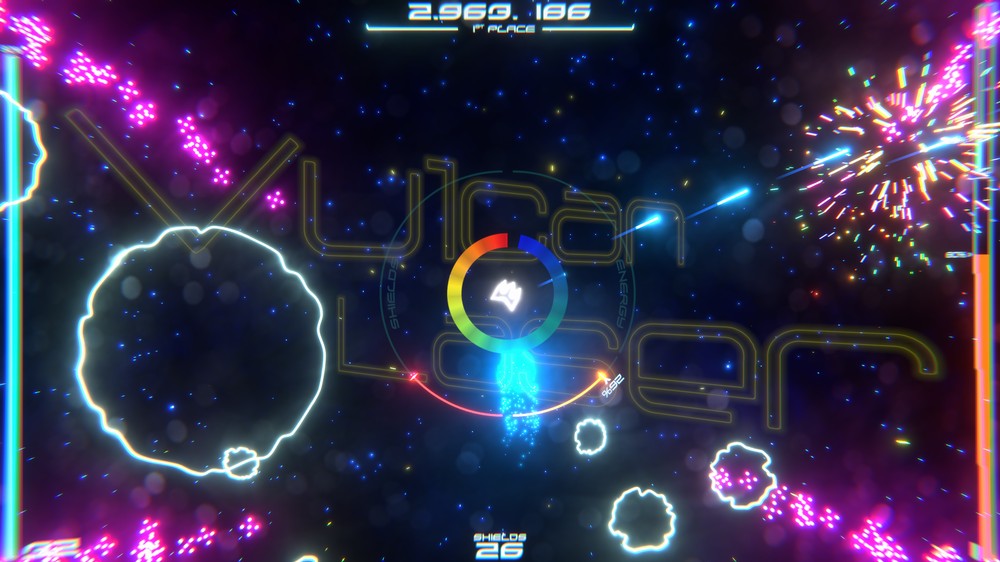 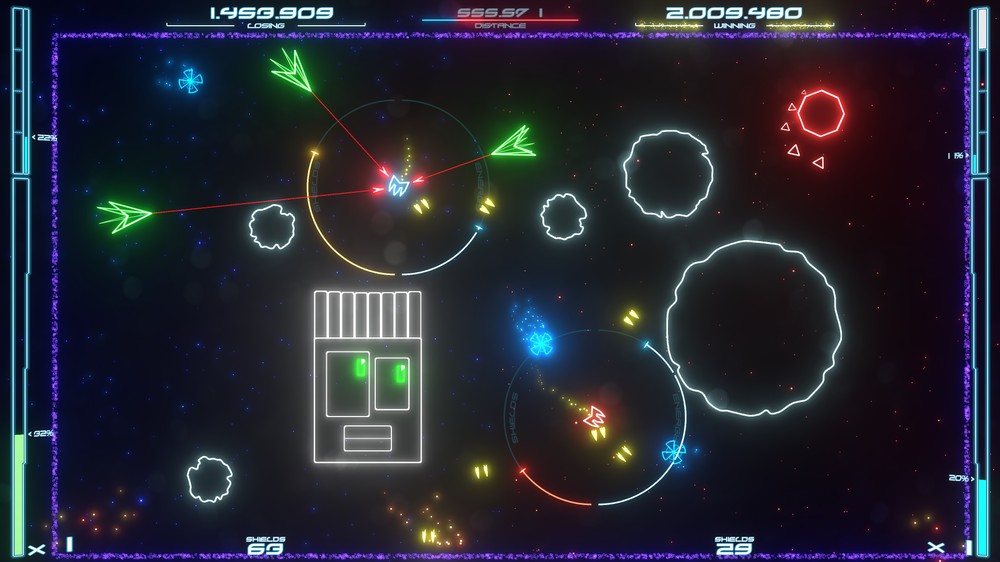 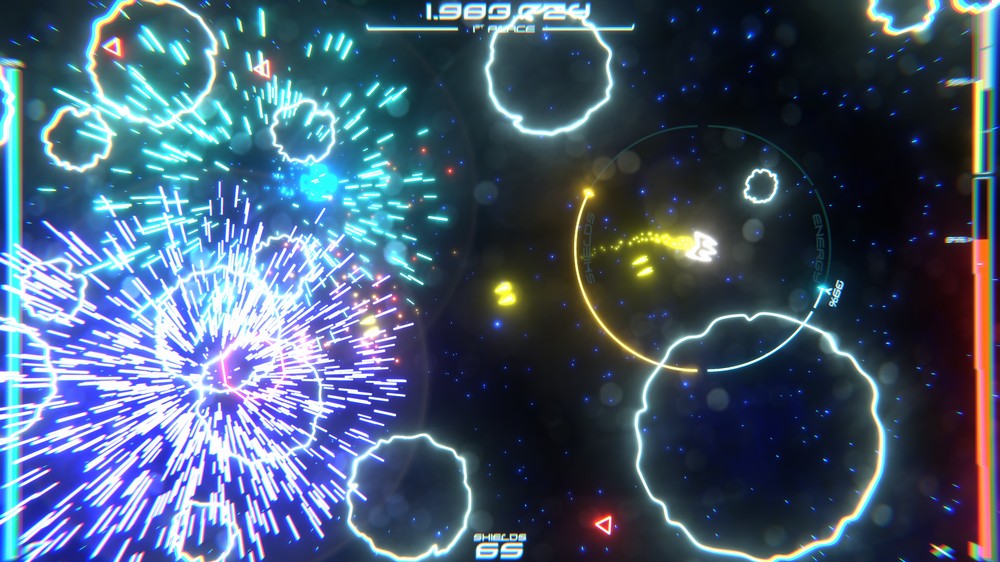 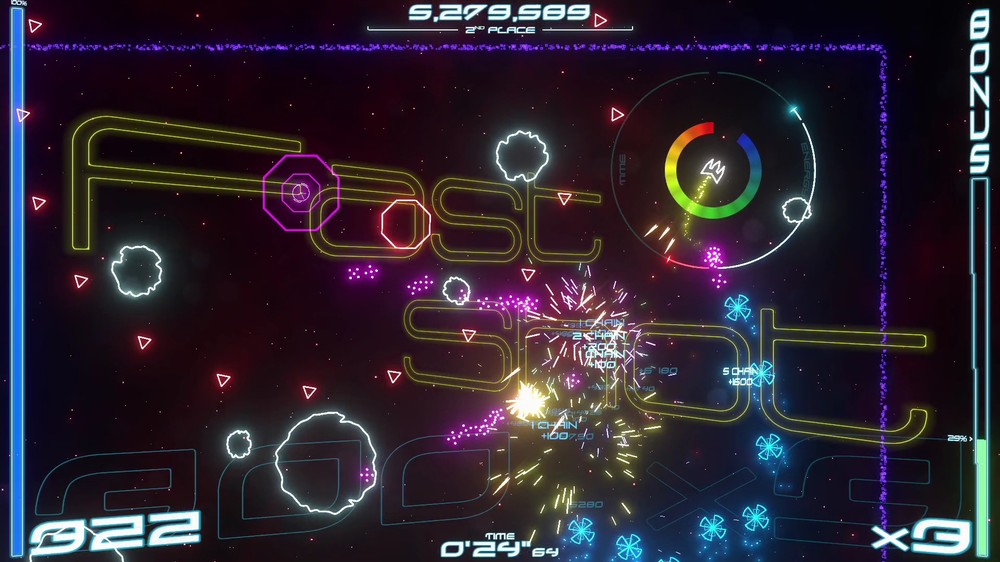 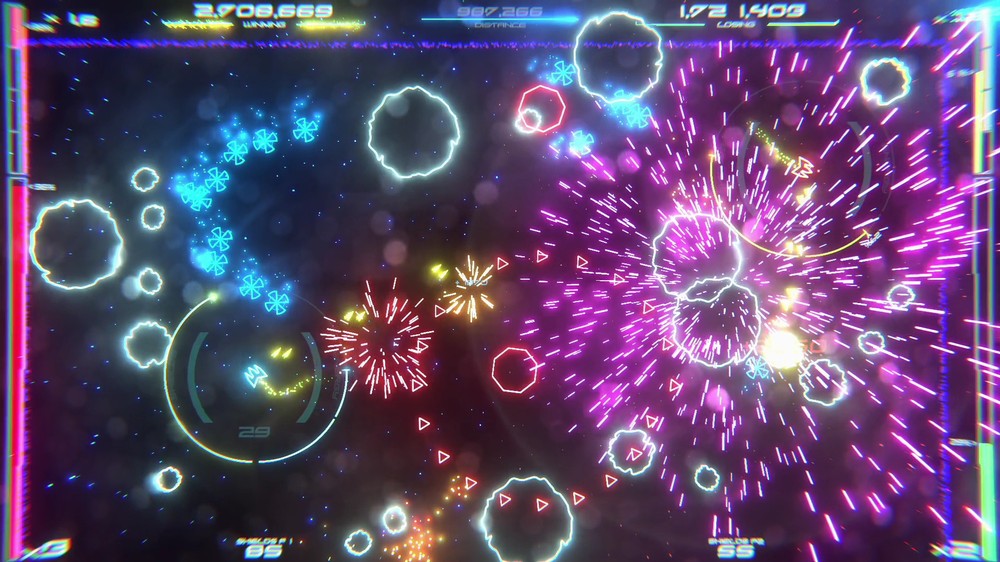 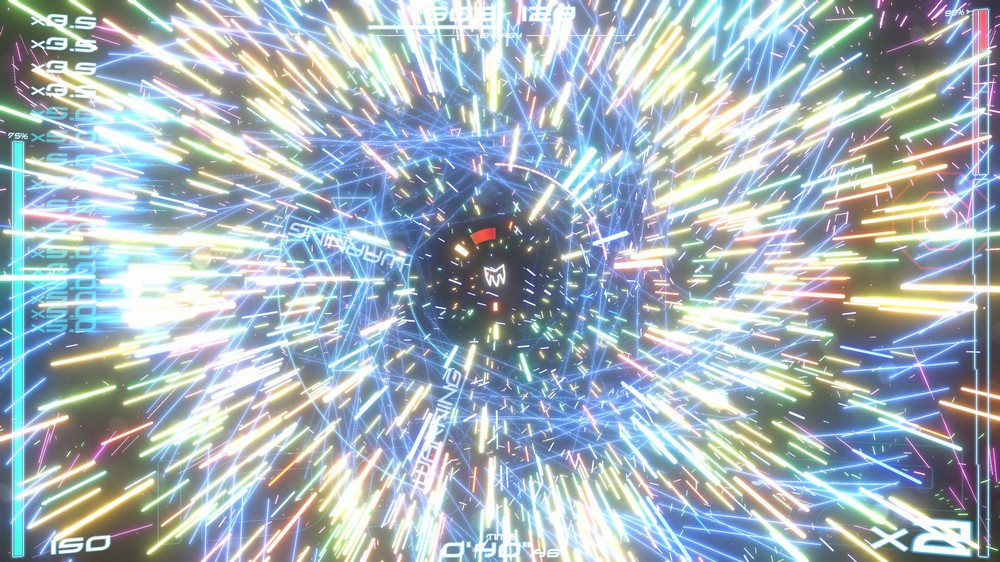