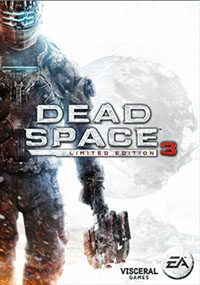 Dead Space 3, the first big release of the year, has been finally been unleashed upon the world on PC. Dead Space is one of those horror franchises that I’ve always admired for its ability to create dread with deceptively very little effort. That unfortunately hasn’t helped me find the time needed to seriously sit down and play the two previous titles as they have quickly joined my ever growing list of games that I need to beat. Dead Space 3 however brought a few new tricks to the series this time around which definitely grabbed my attention and made me really want to get to know the series better.

Dead Space 3 once again follows the shattered to hell life of Isaac Clarke, the survivor of two Necromorph outbreaks, who has the schematics to build or destroy the Markers practically burned into his mind. For those just joining the franchise then you’ll be more or less treated to a recap of the first two games before diving waist deep into Necromorph hell. After a rather grim opening act following a soldier on the ice covered planet of Tau Volantis you are whisked away taking up the role of Isaac as he is dragged back into the fray when he finds out from the last of EarthGov that she’s gone missing. Oh and those Unitology fellows are real keen on ending Isaac at the first available chance, to fulfill their destiny.

One of the interesting choices by the developer was add a drop in/out co-op mode to the series in their newest installment. From my own personal experience with another title that decided they needed co-op in their previously solo endeavors this was going to go one of two ways. I was either going to go through it swearing under my breath that this really wasn’t needed because I love the series or happily enjoy playing it with a few of my closest friends. Luckily, Dead Space 3 offers a great co-op experience while not sacrificing the integrity of the single player experience too much. 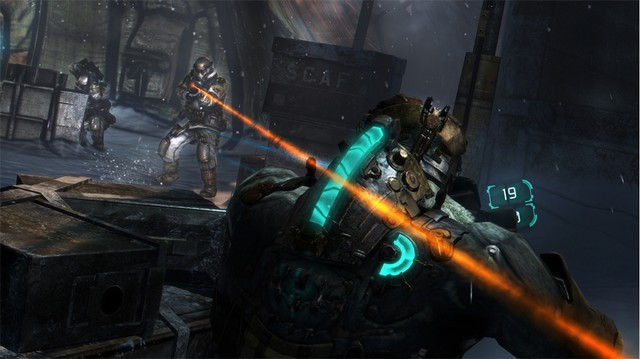 Visceral definitely took their time to make sure that co-op could work in the same space as the solo experience by tweaking puzzles here and there, like the generator room early on in the game. Other puzzles however were obviously designed with co-op in mind requiring a bit more effort by the a single player to use both the mouse and WASD cluster independently to navigate two separate “orbs” to override a door lock. You can play Dead Space 3 with a controller if you want to but I choose to go the standard keyboard/mouse route for this review.

From a storytelling point of view, Dead Space also has a completely different set of dialogue and cinematics when you are in co-op to incorporate the otherwise barely seen NPC John Carver into the gameplay. I liked this approach because Carver isn’t just a “clone” of the main character. He has his own story and problems that are flushed out and revealed as you play. It’s interesting to see both Isaac and Carver react with one another as they both have some serious issues. Carver’s issues start showing up as toy soldiers start appearing to him alone much like some of Isaac’s problems in Dead Space 2. Dead Space 3 is one of the few games that I’ve played where adding co-op actually worked to its advantage while still almost retaining the same feel as its predecessors.

Dead Space 3 also gains some new moves and additions in the combat sector to change up the pace. Isaac now has gained the ability to do roll out of harm’s way, though the game first told me of this some 10 hours into it if you took the time to do all the side missions, which is useful at times. The keyboard layout for this button, Ctrl, is a little weird though as it’s not exactly an easy key to hit in battle. It can be remapped to something a bit more accessible if you like though. Isaac also gains the ability to crouch behind cover which also proves useful against the human soldiers throughout the game to great effect in this third person shooter. 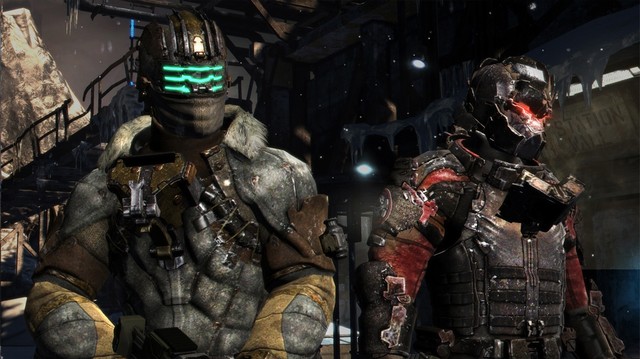 One of my favorite additions though is the ability to create your own weapons from resources found throughout the game. You start out with the basics, a machine gun and a cutter, but once you get access to one of the upgraded Weapons Benches, the fun really begins. If your purchase the Dead Space 3 Limited Edition copies of the game (standard for initial release) you already get access to some pretty sweet Day 1 weapons and suits, like the Evangelizer, a weapon I used heavily throughout the game.

If those don’t suit your fancy you can put together a wide assortment of weapons like a carbine and rocket launcher or a semi-simple but deadly Heavy Line Cutter with a Rotator Cuff mod and Shock damage. The possibilities are there for the taking but if you’re not that inclined or creative there are plenty of blueprints featuring classic Dead Space weaponry to build from. If you come with a pretty cool idea for a weapon you can actually make a blueprint and share it via co-op with your friends online as well as trade items. If you want an added advantage in game there is an integrated store in the game that allows you to purchase weapons, suits and resources packs via real currency though most of them can be earned in game by salvaging items save for the suits.

I’ve been dropping hints that Dead Space 3 is almost as good at the previous installments. In some areas it is the best in the series but the one thing that has lost something is the scare factor. The game looks great and has a killer atmosphere that oozes dread but I can’t help but feel that the scares are cheaper this time around. Before I had the undying feeling that something was going to come out of woodwork at the slightest provocation. Now the thrills and scares seem spaced too far apart and I’m just waiting for them to happen. Dead Space 3 features some music throughout the experience like little bouts of country or other tunes, but it’s really the game’s more subtle audio cues that keep drawing my attention to the series. The near complete lack of audio other than the sound of Isaac’s breathing when going down a dark hallway or wide room is far more terrifying than a ramped up danger score. Dead Space 3 does have those in all the right moments though. 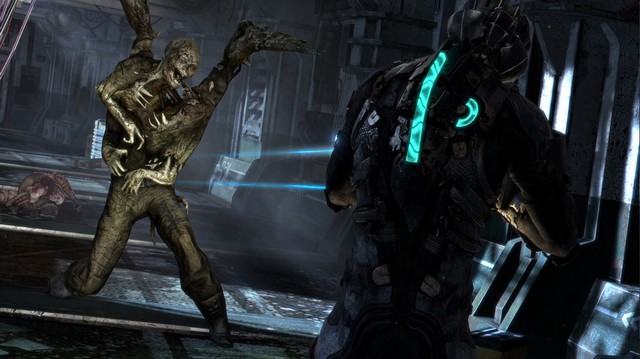 Graphically, Dead Space 3 is very pretty, depressing, but pretty none the less. I’ve slowly been playing a majority of my games on PC as of late due to the overall graphically superiority in some of the most recent releases, but the PC version of Dead Space 3 is only slightly better than the 360 version. I have to say that I am really impressed once again at Visceral’s ability to create harsh and bleak environments. As if the dark hallways with blood written words on the wall weren’t enough you have the frigid and harsh winter winds on the planet to survive and struggle through. Your character actually reacts to the strong winds by moving at a slower pace and shielding his face with his arm when you first arrive on the planet. That and you have to keep moving or freeze to death not unlike Lost Planet. As with the previous installments, this game lives up to the developer’s name. It really is a “Visceral’ experience. One wrong move and you’ll end up ripped to shreds right after you’ve just curb stomped a foe into a bloody puddle.

Visceral Games definitely took some risks on changing the formula to their series, but Dead Space 3 is definitely a better game in most regards because of it. Sure I felt the scares weren’t up to par with the previous installments but the added weapons creation system and extremely well done co-op execution actually made up for that to an extent. Once again Visceral Games brings us an excellent story, great atmosphere and an enjoyable co-op experience to boot. I definitely recommend picking up Dead Space 3 for PC as soon as you can. 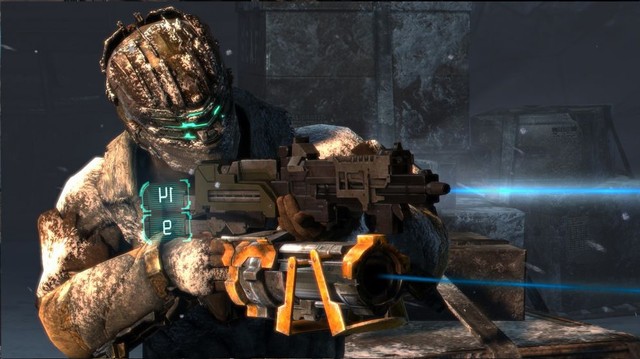 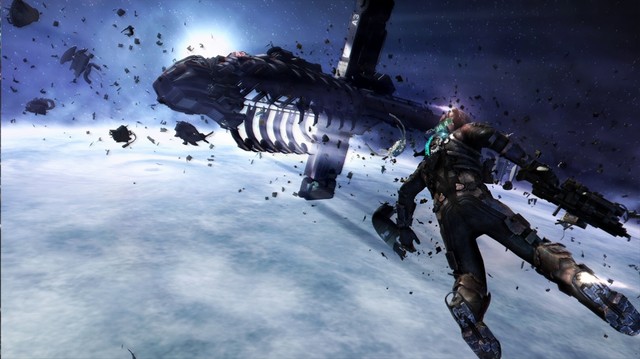 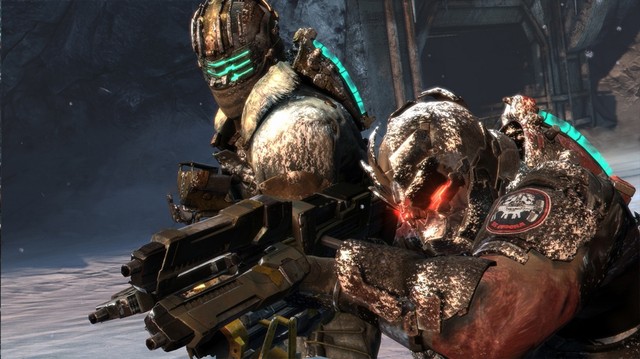 1
1136
The Walking Dead: Saints & Sinners Review – Oculus Quest
2
982
Join the Galaxy’s Finest as Star Wars™: Squadrons Soars Into Homes Today
3
982
Metamorphosis is 33% Off on Steam!
4
982
Werewolf: The Apocalypse – Heart of the Forest launches on October the 13th
5
982
Synth Riders Celebrates Anniversary with a Month Full of Treats and an Oculus Ques...
6
982
Worm Jazz Review – PC
7
982
Take to the Skies and Choose a Side in the New Trailer for Next Generation Air Com...
8
982
CRASH BANDICOOT 4: IT’S ABOUT TIME IS AVAILABLE NOW
9
982
Frictional Games Shows Off First Gameplay Footage of Amnesia: Rebirth
10
981
The Falconeer First-Look Preview – PC
All Original Content on Game Chronicles is Copyright (c) 2002-2020
Sinjin Solves Walkthroughs Copyright (c) 1996-2020 by Mark Smith