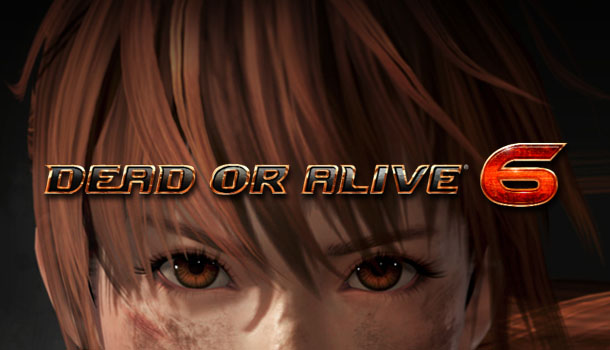 A full-featured fighter with fantastic fighting action and a gorgeous presentation.

The sexy cast of DOA is back for their sixth official installment in the multi-generational fighting game, but just how does this aging franchise hold up and compare to its competition after twenty years?  Dead or Alive is mostly known for its highly sexualized content – I still remember the commercial for Dead or Alive 3 where two guys are listing the reasons they love the game and the best feature for one of the guys is that “she kicks high”, referencing the numerous “panty peeks” that, along with gravity-defying boob physics, have become synonymous with the franchise.

Dead or Alive 6 has somehow matured; evolving beyond its sophomoric visual titillation to create a highly entertaining and approachable fighting game.  While the female cast still looks like they stepped off the set of a Russ Meyer film, the girls (and women) are now much more appropriately dressed for those impromptu fights that awkwardly break out, even during casual conversations in the story.    “Nice weather we’re having…how’s your dad…wanna FIGHT!?”  Not all is squeaky clean though, as there are still several girls and outfits that are far from practical, but the truly sexualized outfits have been locked behind a paywall of either in-game costume parts or the first of many super-sized DLC packs. 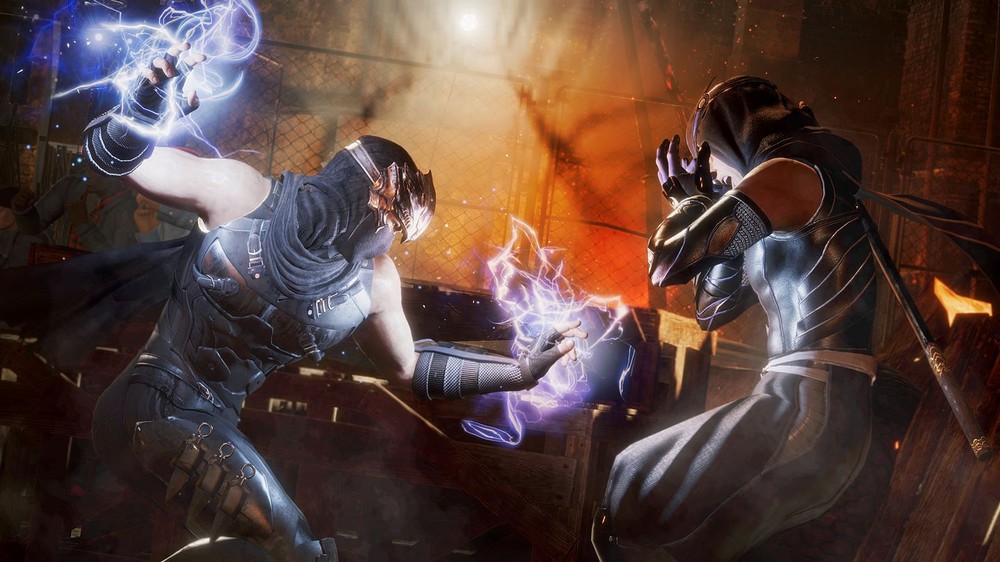 Fans of the franchise should be no stranger to the glut of DLC available for Dead or Alive.  If you add up all the DLC for DOA5 you’d spend just shy of $1,300 to possess every last character and costume, so nobody should be shocked that there is already a $93 DLC bundle available for DOA6 packed with 62 costumes and two new characters.  Yes, it’s expensive; yes, it is totally unnecessary to your completion of enjoyment of the game, and yes, there are hundreds of people with more money than fashion sense that will throw their money at Koei Tecmo…no judgement…well, maybe a little.  I just find it somewhat ludicrous that a DLC exists that costs 150% of the initial game purchase and much of the content in the DLC isn’t even available yet – it will slowly be trickled out over the next four months.

For those here for the fighting and not the fashion there is plenty of fantastic content waiting for you in the core game.  Dead or Alive 6 is just as approachable as ever, with a great control scheme that allows casual players to mash their way to victory and seasoned pros to explore a multi-faceted moves list tailored to each of the 27 fighters, including two new additions to the line-up.  The fight engine is based on basic punch, kick, hold, and throw moves with multi-button combos of those basic inputs.   The nice thing about those combos is that the shoulder buttons are mapped to those critical moves, so you aren’t forced to make awkward two-button presses in the heat of combat. 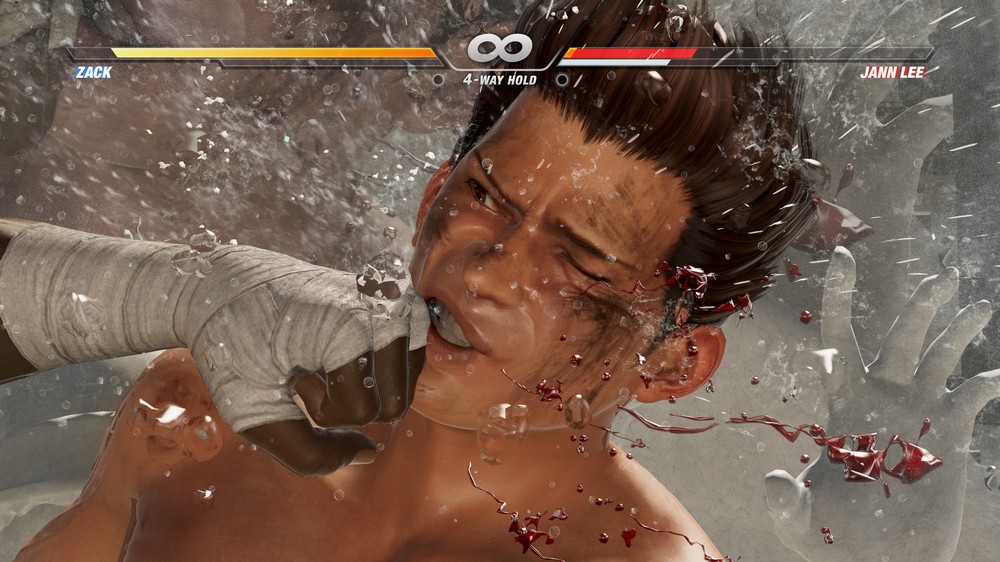 Once you learn the hierarchy of the moves the fighting becomes much more enjoyable.  Throws can counter a hold, punches and kicks can counter a throw, and holds can counter a punch or a kick.  It’s a simple yet rewarding combat system that encourages you to learn its intricacies rather than just mash the controller.  It’s also worth mentioning the awesome instructional modes that will ease newcomers into the game or offer a refresher course to veterans.  A dedicated Training mode is available in the main menu, but you can also launch a character-specific training simulator for any current character during the story.

New to the fight system is the Break Gauge that slowly fills as you dish out or take damage.  This meter fuels the Break Blow, a powerful one-button attack, or you can mash that button to trigger Fatal Rush delivering massive damage and usually sending your opponent across the arena.  These Break moves can also be countered with a Break Guard powered by that same blue meter.  This new system adds considerable flair to the already-awesome fights you’ll experience in DOA6.  There are several fighting styles spread across the cast, so even though you’ll be using the same button presses and combos you’ll get to experience a varied assortment of authentic animated moves spanning karate, jiujutsu, taekwondo, drunken boxing, and of course, pro wrestling thanks to the delightful father-daughter team of Tina and Bass. 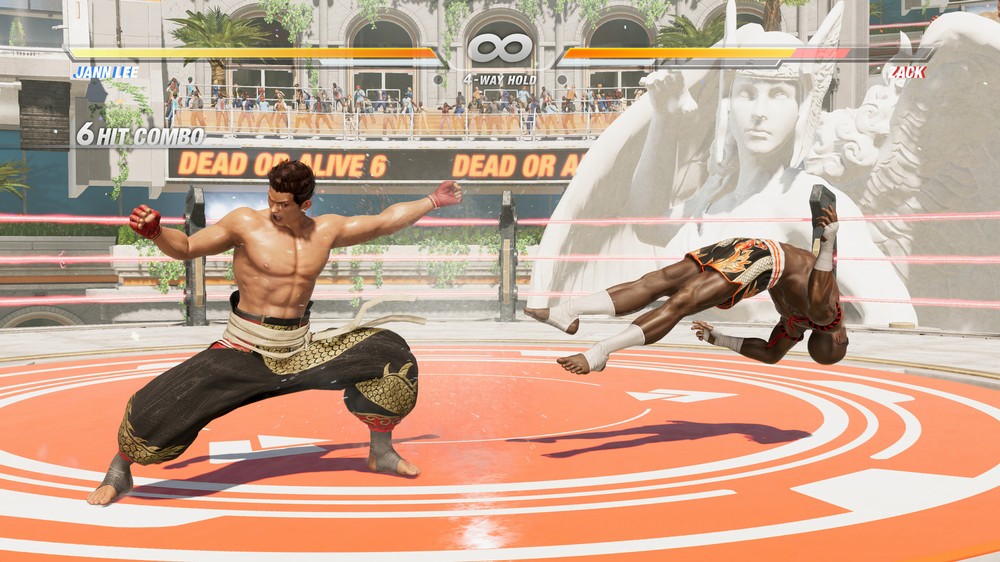 There are plenty of ways to experience the incredible fighting DOA6 has to offer starting with the massive story mode that spans 66 episodes divided into 7 chapters.  Next up is the Quest mode with 104 challenges requiring you to perform specific tasks to unlock up to three stars per challenge.  There is the standard Fight mode that includes; VS, Arcade, Time Attack, and Survival variants (no Tag Battle) and an Online mode which currently only offers Ranked matches.  Matchmaking was easy enough but seems to only match based on ping rather than skill, which is a horrible way to match for rankings.  You only have single fight options with the choice for rematch or quit when over.  There are no tournaments or spectator options at this time.   Online is super-barebones right now.

Dead or Alive 6 makes the most of the scalable power of current gen PC’s, delivering 60fps and stunning 4K visuals.  Backgrounds are exquisitely detailed, often with lively crowds, and there is expert use of depth of field blurring to snap the focus to the ultra-high-res character models with fantastic facial features, skin textures and incredible wardrobe details with flowing fabrics, realistic leather, and fluffy cotton sweaters.  The hair texture and animation is second to none, detailed down to the individual strand.  Even more stunning is that after the fight you’ll see characters with dirty scuffs on their clothes and beads of sweat dripping down their glossy skin. 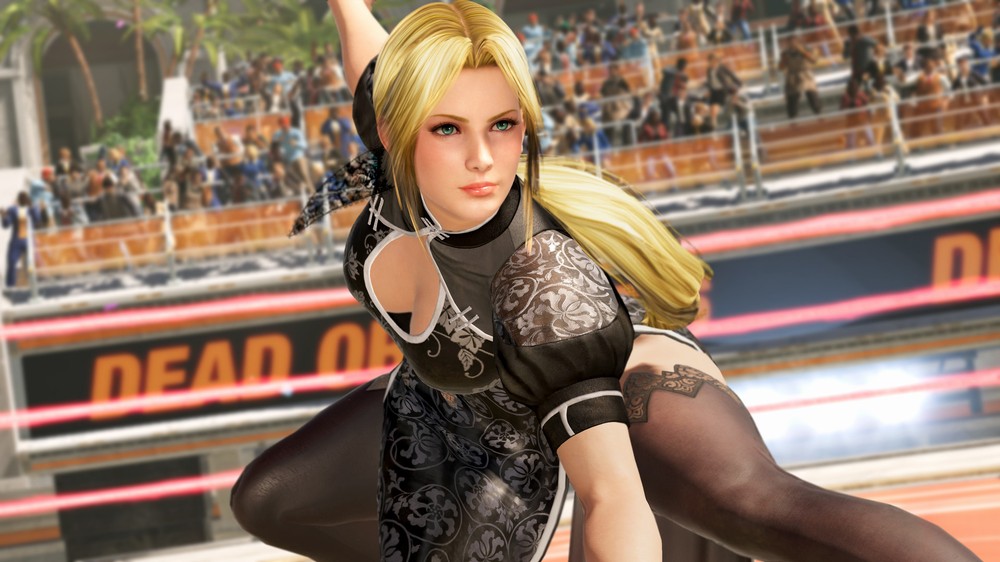 The audio is fantastic with a great music and powerful sound effects including immersive positional audio.  My rear speakers were crackling whenever the electric fence around the arena spun behind me.  The venues are multi-tiered, so you can literally punch someone into an entirely new part of the environment, often with explosive results.  Even the English voice acting was surprisingly good…for the most part.  Some of the conversations came off a bit weird, but that was more translation than performance.

While there were no serious issues with the game there were a few minor annoyances.  The story mode has a massive imbalance of fight versus story with a prologue and epilogue to each episode that was often ten times longer than the fight itself.  Some episodes don’t even have a fight…you just watch and move on.  The flowchart presentation of the story was also confusing and impossible to follow, bouncing around characters and plot arcs.  It’s best just to keep hitting RT after each fight to move on to the next episode, even if it doesn’t make sense. 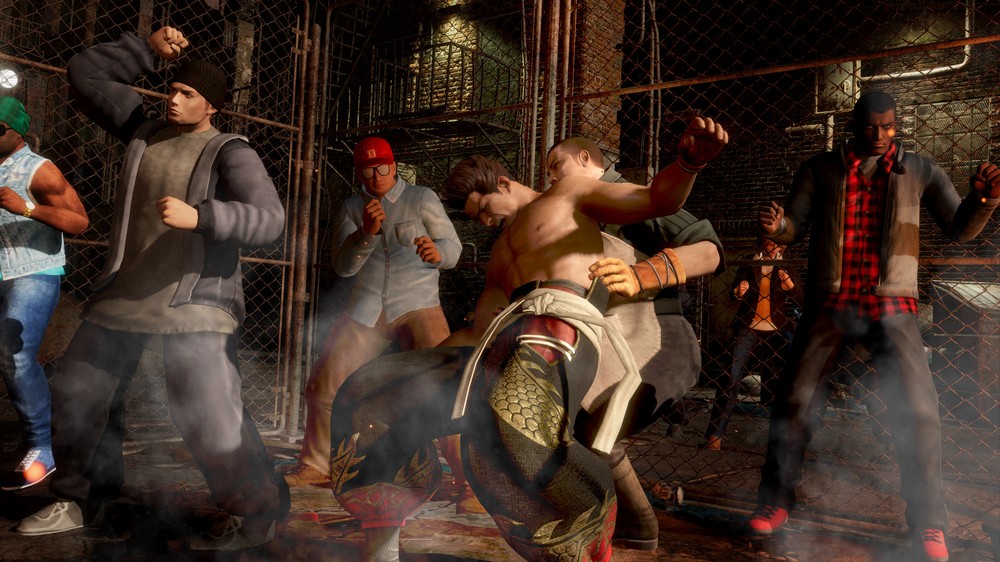 Another minor grievance is that for some reason they color coded the fight moves but swap the colors for the A and X buttons on the Xbox controller.  What will likely be a huge annoyance for anyone trying to unlock those costumes will be the totally randomized nature of the reward system in Quest mode.  Costume rewards are dished out as parts and those parts are randomly assigned to characters and wardrobe choices effectively leaving you at the mercy of the randomized system.  You have no way to actively quest for a specific costume for your favorite characters – you merely have to wait until you have grinded enough parts that you eventually unlock it.  Even more insulting to your time is that the game will often award you parts for undesirable costumes you would never unlock given a choice or worse, assign those parts to DLC characters you don’t even own.

Dead or Alive 6 released as just the right time, able to make the most of current gen consoles as they are about to evolve into something new, and as always, perfectly scalable to modern PC’s up to and including pristine 4K visuals.  There is a robust lineup of more mature fighters, an abundance of story content, solo challenges, and local multiplayer options to keep fight fans glued to their controller. There is even a huge library of database info and DOA trivia waiting to be unlocked.  It’s a shame the online content is lacking, and the heavy focus on future DLC content clearly indicates Koei Tecmo is in this for the content cash grab, but at least they didn’t strip mine the core game to create that content.  As it stands, Dead or Alive 6 remains a full-featured fighter with fantastic fighting action and a gorgeous presentation that will entertain for months to come. 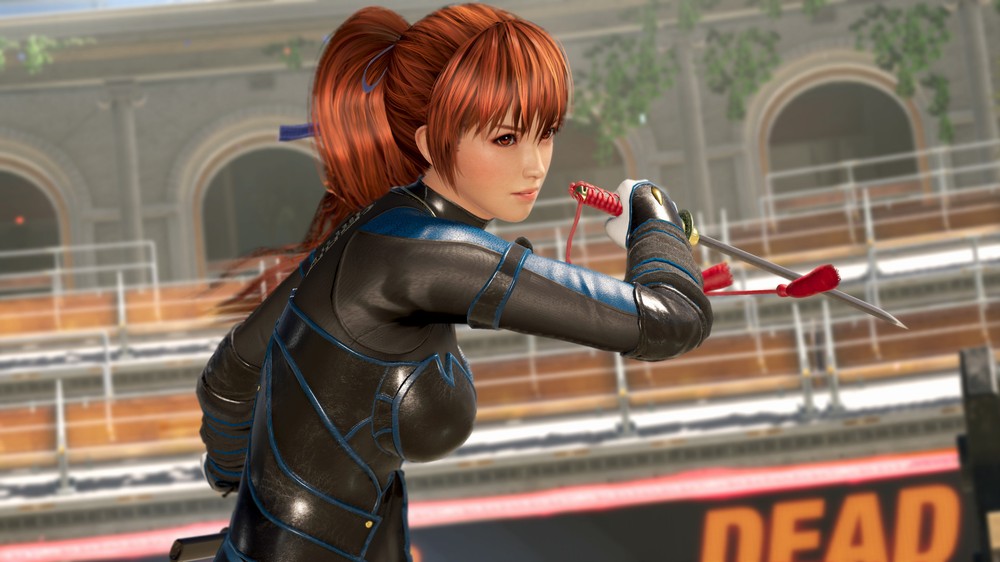 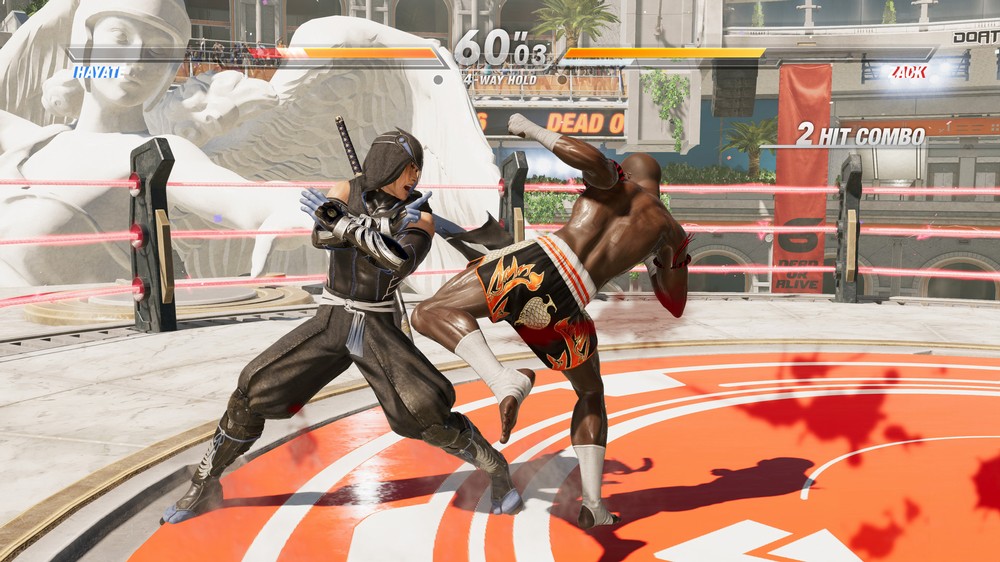 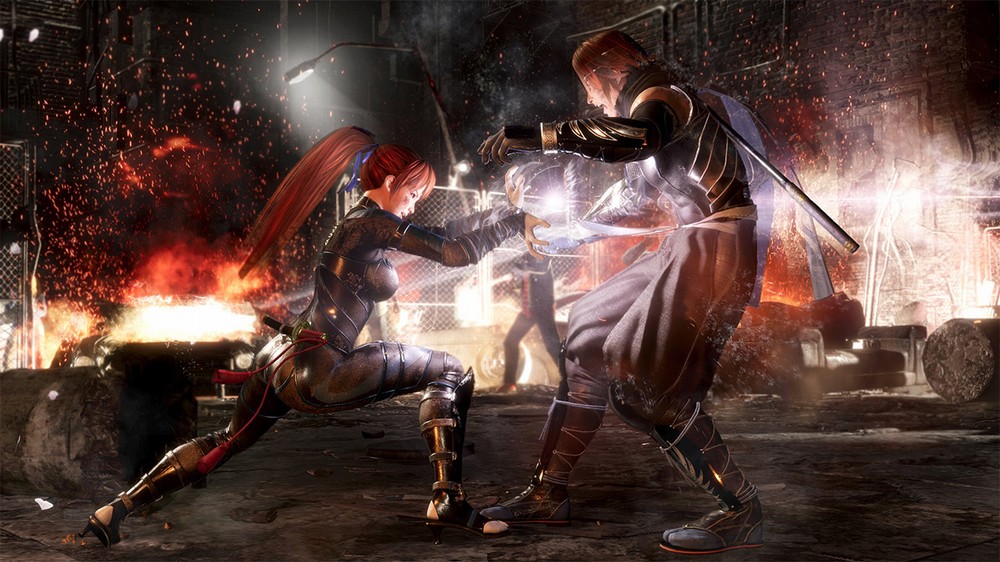