No multiplayer yet, Sound cuts out

Survival games outside of your traditional titles like Resident Evil have shot up in popularity over the last few years. With their growing popularity players now have a wide variety of choices and themes to pick from across several gaming platforms. Games like Minecraft and Terraria have taken things to a whole other level by making the player gather resources to craft your own shelters or other necessities during the day to stay alive during the night cycles. Now imagine a game where it’s never truly day and you have to go out and gather resources to survive in the dark. Such is the case with developer Allgraf’s survival/exploration/crafting based adventure Darkout for PC.

It should be noted that the Darkout that I’m reviewing here today is a work in progress as Allgraf brings us more and interesting features released in future stages down the road like endgame content, new locations and multiplayer potential.  But even in its current state of existence, Darkout is quite enjoyable and way too addictive. The story told here is that you escaped the harsh environments of Illuna, as the civilization there just gave up on trying to live there. You end up stuck on the spaceship that was destined to take you and other survivors somewhere to start anew. In an effort to save power on the ship your stasis pod gets ejected and you wake up on Illuna’s surface with only basic gear to survive. 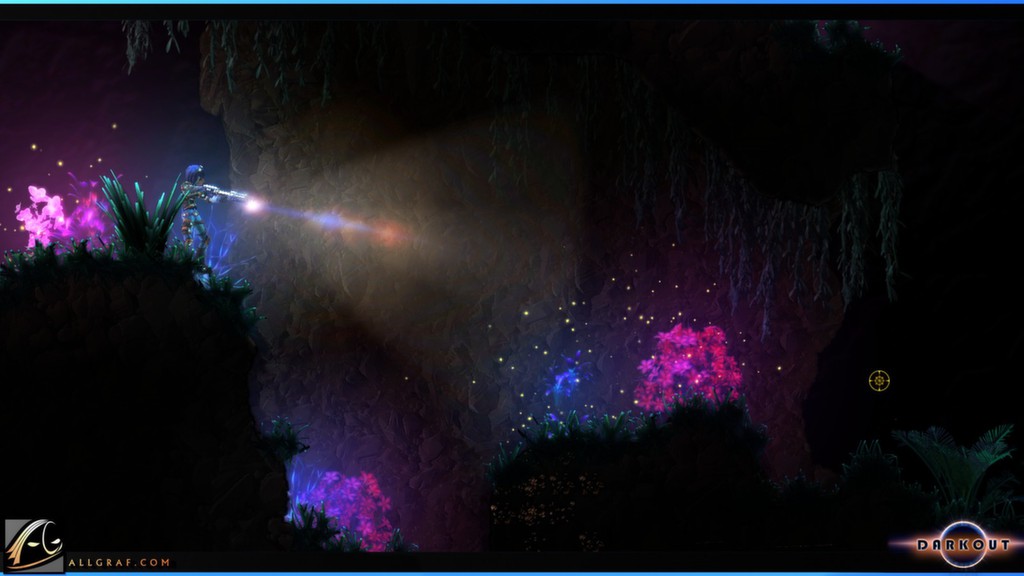 As this genre of games goes, Darkout has you following the same basic rules of survival seen in similar games. You use your starting tools to cut down trees to gather logs, dig to create a suitable location to build a shelter, and craft logs into wood to make the wood blocks, walls and doors needed to keep you safe when the hostile shadow creatures come knocking. Beyond that Darkout sets itself apart from the others some cool features namely it’s research system and a much easier to use interface. As you get started there’s a built-in tutorial that lays down the ground rules and how to use the crafting and research systems. Basic items like wood walls and doors can be created easily but items like wooden or metal floor hatches need the use of the “combinator” and furnace plus the required materials to create them. Each new material unlocks new possibilities of things to create like bows, generators, elevators and advanced lighting and some new things can be made once you find blueprints among left behind in crates from other survivors that didn’t make it.

Control wise, I have to say that Darkout is a dream when it comes to collecting materials and placing them thanks to the precise control that a keyboard and mouse has to offer. Darkout allows players to dig or mine one block at a time or up to three at a time with the press of a toggle button. Items such as walls, and blocks have to be placed one at a time, though there is an option to place multiple items by holding the left mouse button down with the proper item equipped and moving the cursor to the desired locations not unlike drawing in some art software. For easy switching of materials or weapons you can assign them to quick slots that can be cycled and activated via the number keys or the scroll of the mouse wheel. I also love the fact that you can drag and drop items such as beds, doors, and lanterns right from your inventory and place them in the world and change the way they face depending on which way you are looking. 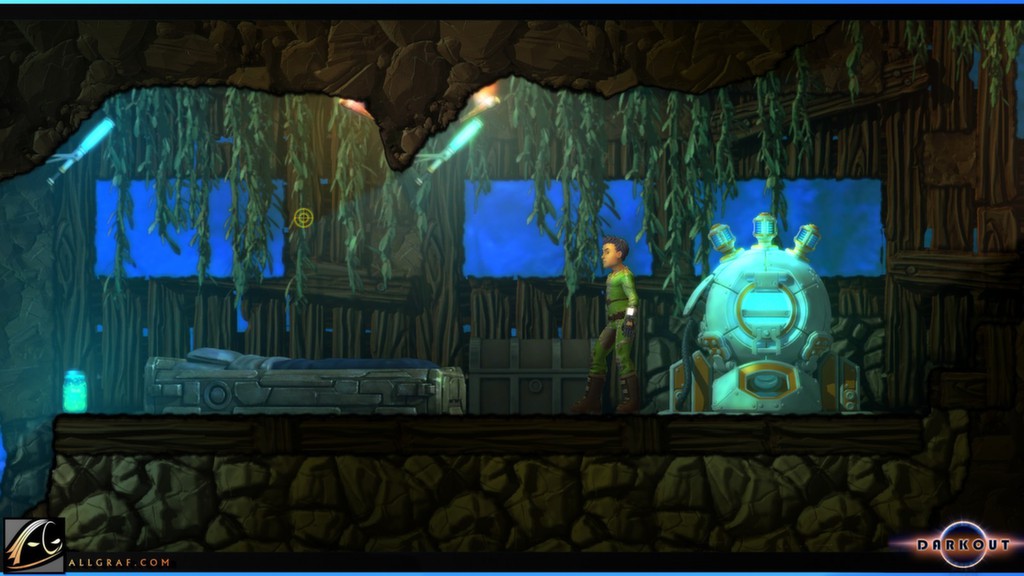 Darkout also comes with a pretty sweet visual presentation that was a major highlight for me. Even though you can’t tell Darkout actually does have a day and night cycle but extreme cloud cover all but blocks out the sun on this planet. So as you can imagine by the name, it’s a pretty dark game visually. There is a Gamma slider though for those super worried, but Darkout does feature an amazing light system for an indie game. On the planet’s surface you have lush flora, some of which glows in neon colors like most of the shadow creatures including flying jellyfish creatures. Underground or in buildings is a different story though as the only light you’re likely to find is that of gecko and crystals in certain areas. As you dig into the solid dirt, copper and coal you’ll be mostly in total darkness. This is where your glow light or crafted torches come into play, as you can place them on walls, in blocks or on rock formations which casts light and shadow on the surrounding areas. You can also carry around lanterns which can be placed and turned on or off at will

Despite the primitive nature of building wood huts and lighting your way with torches, Darkout still has a science fiction vibe all its own. Everything from the tech you use later to neon colorations and the music score just sell the package. Even though I love the retro sounds and aesthetics of Terraria, I have to say I love the dark and moody menu music as well as the soothing yet almost cautionary score that plays while you are exploring, gathering and crafting. The sound effects are really good right down to the change in footstep on different materials and the sound of actually digging in dirt and mining minerals. I did notice that the spotty audio doesn’t trigger every time you interact with the world.

When it comes right down to it Darkout is an amazing adventure with strong graphics and an incredibly easy-to-use interface and controls.  As I mentioned before this game is still a work in progress but what I played I enjoyed immensely. I am definitely looking forward to seeing the new content as it is released in the future. If you like crafting survival games then you have to check out Darkout for PC. 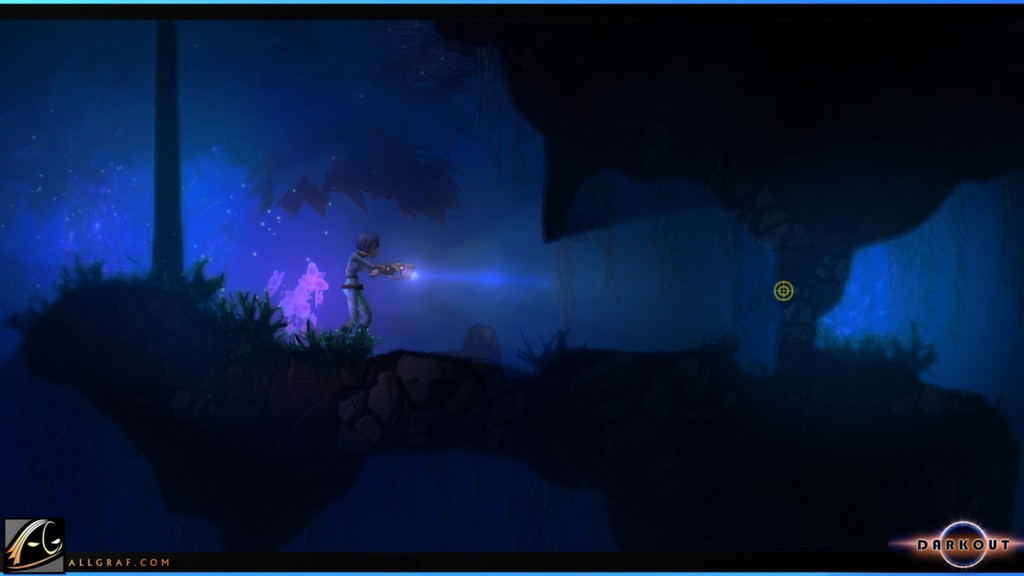 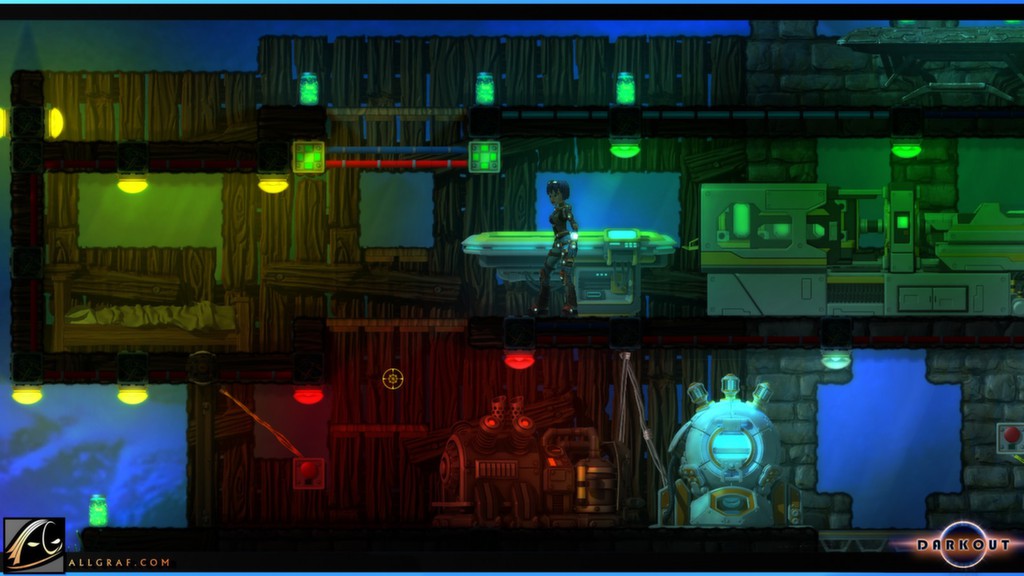 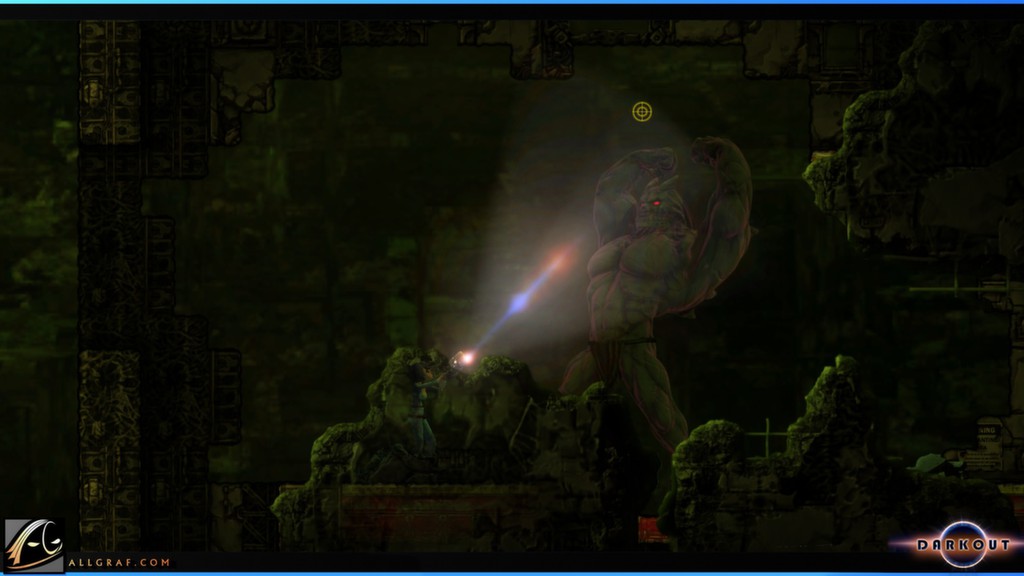 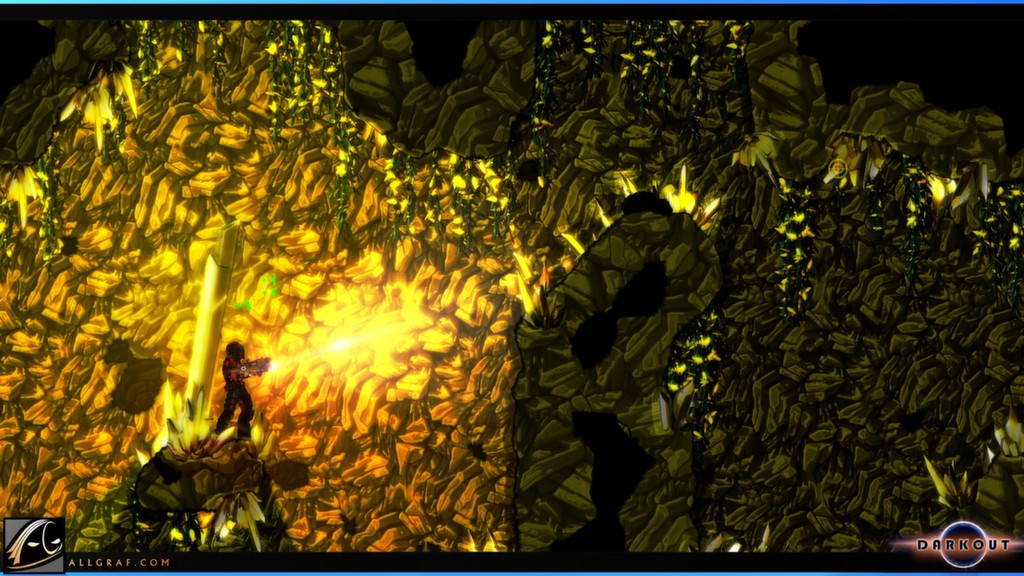 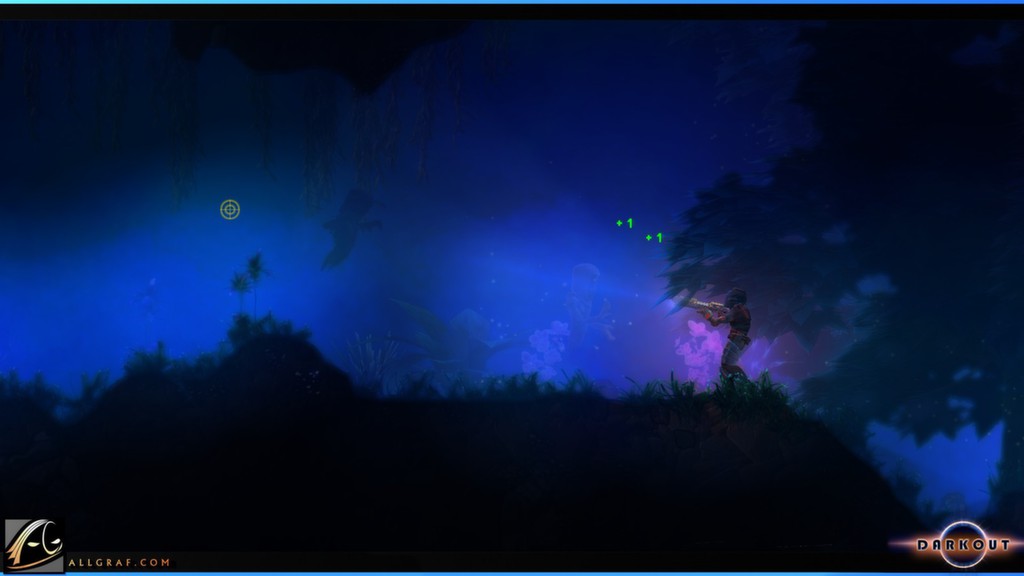 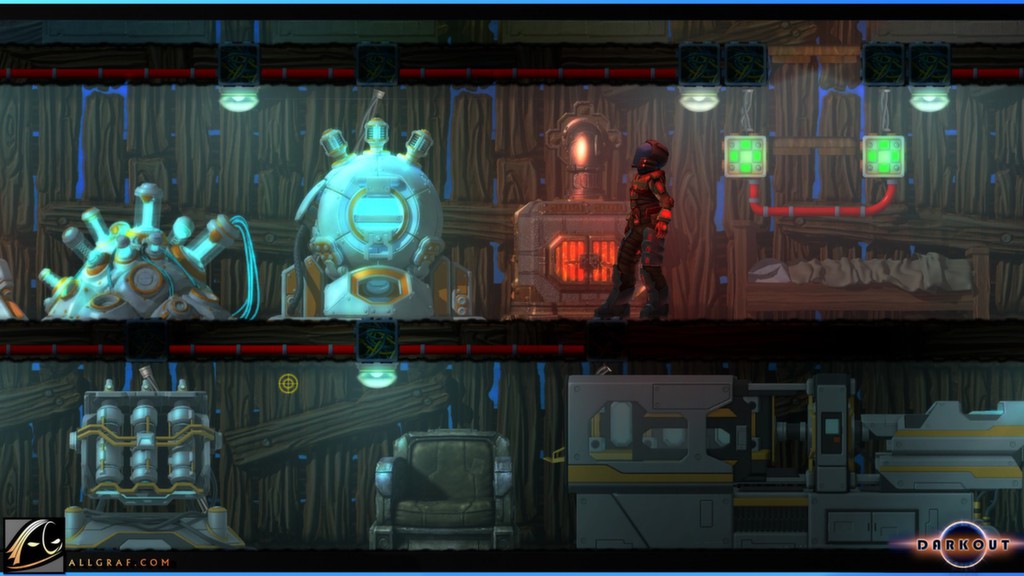 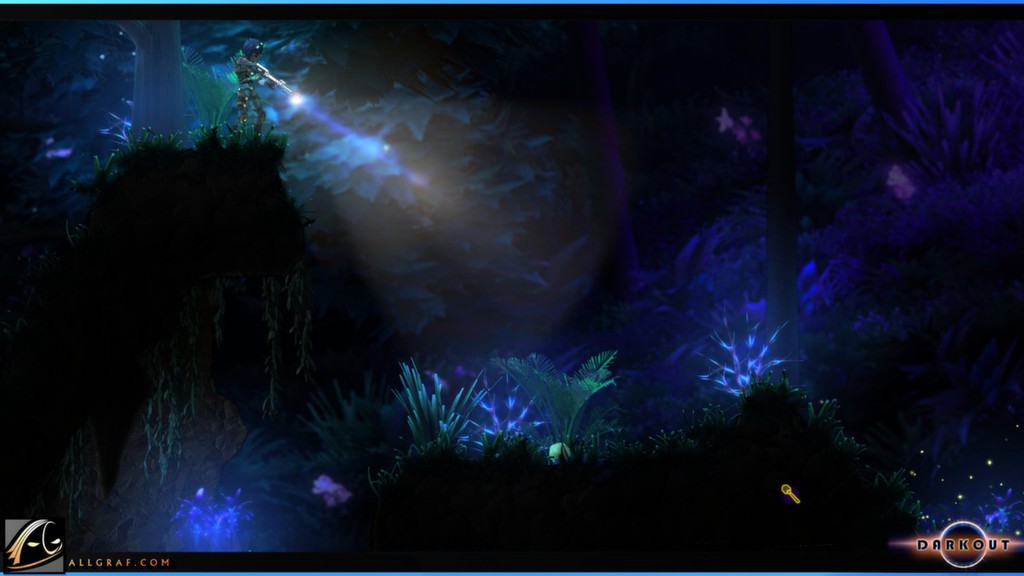 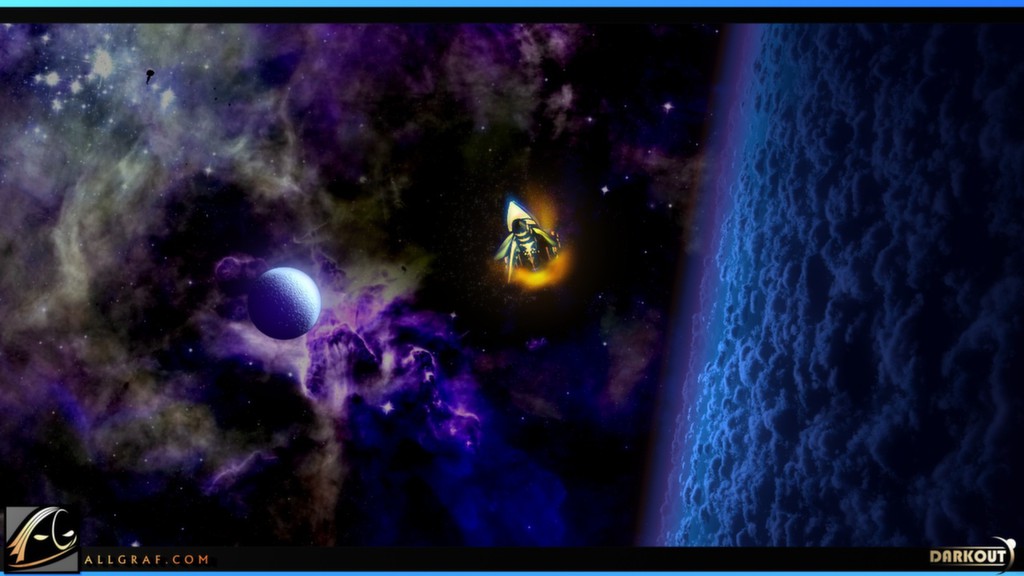