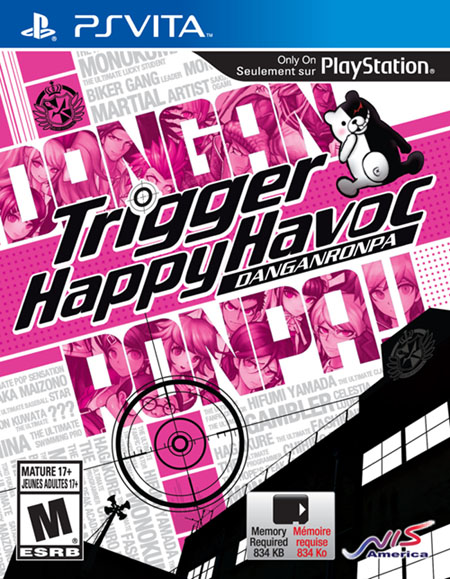 Original design and presentation of a classic murder mystery targeted toward lovers of anime and interactive who-done-its. 20-hour story is impressive for Vita

It's a bit slow getting started, suspects are often obvious, mini-games are almost too easy for skilled gamers.

Once your mind wraps itself around the twisted concept you won't be able to stop playing this game.

Danganronpa: Trigger Happy Havoc might sound like the latest game show airing in Japan but in reality it is one of the most “WTF am I playing” games I’ve ever played on my PS Vita.  I went into this game with absolutely no expectations of even a shred of knowledge about what I was about to be playing.  Suddenly I am thrust into this ridiculous narrative and forced to interact with a diverse cast of characters in what would soon turn out to be one of the biggest “Who Done it?” thrillers of recent memory.

So here I am playing Makoto Naegi, a high school student who has just been accepted into Hope’s Peak Academy, a school for exceptional young people who have proven to be the “Ultimate” in some niche aspect of their lives.  It turns out Makoto won some random drawing making him the Ultimate in Luck, which seems to pale in comparison to the seemingly more meaningful skills of his classmates.   Makoto arrives for his first day of school a bit early, so he decides to investigate the campus, but within minutes he mysteriously blacks out.  When he awakens he finds himself along with 14 classmates trapped in the school now sealed up tight with bolted-on metal shutters and locked doors. 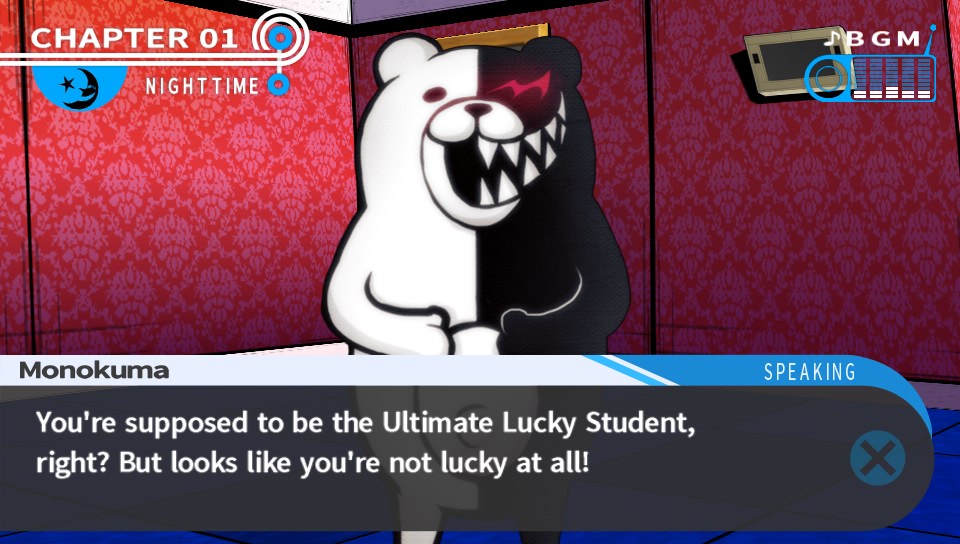 As the students start to question their situation a sinister teddy bear named Monokuma appears and lays down the school rules.   The kids are trapped in this school for life.  The only way they are allowed to leave is if they graduate and the only way to graduate is to kill a fellow student and get away with it.  Yes, this is definitely extreme, and the murderous theme and certainly the language all contribute to the game’s Mature rating.

Obviously suspicion and paranoia become instant and overwhelming factors that drive some students closer and others apart as alliances are formed and enemies made.   For the most part, Danganronpa plays out like a murder mystery novel where you mostly tap the X button to wade through screens of textualized story accompanied by the random voice clip and anime-style action pose.   In some sequences key words will be highlighted in purple and you can press triangle to steer the conversation in a new tangent.  And then you have these exploration sequences where you glide your character through the halls, checking out various parts of the school; always mindful of curfew and the importance of not being in the wrong place after hours.

Of course, murders do occur and it will be mostly up to you to gather the evidence and proof of the killer’s identity and motive.  If you are successful the killer is caught and punished (killed) otherwise they graduate.  Either way, the core group of 15 slowly dwindles creating more and more pressure on the survivors.   Perhaps the game’s greatest strength is in its clever character construction.  You are likely to form instant opinions on several characters based solely on their look or their initial attitudes and conversations, and often those opinions will be wrong.  Relationships are constantly forming and being redefined throughout the entire game. 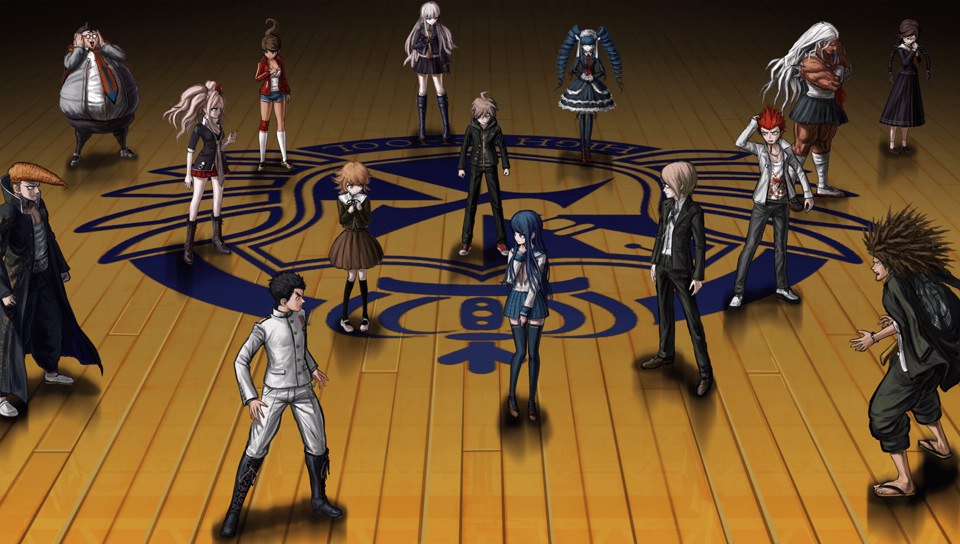 Danganronpa: Trigger Happy Havoc is surprisingly long consisting of multiple chapters, each one divided into two parts; one of exploration and relationship building as you exhaust countless conversation boxes and even try to buy some friends with the occasional gift, and then you have the second half of the chapter when somebody turns up dead.  At this point the game turns into a twisted version of Phoenix Wright or one of those C.S.I. games that has you analyzing the crime scene for clues before engaging in a spirited debate with your classmates on the identity of the killer.   Exploration and searching in the game is made much easier by being able to overlay hotspot circles of people and objects that can then be tapped for more info, which makes missing anything pretty much impossible and keeps the game from turning into one of those annoying hidden-object pixel hunts.

I found the most enjoyable moments of the game took place during the trial as you work with the collected evidence and make your way through a list of clues known as Truth Bullets to prepare your case.  The actual trial is a set of entertaining and quirky mini-games that somehow manage to make use of all the clues and evidence to present your case, while being easy enough to play so that your thinking-game isn’t potentially ruined by poor arcade reflexes.  Even on the hardest skill setting the game is far from challenging, and many of the cases are fairly obvious; at least as far as whom the killer is.  Finding out their motives may take some more detective work.  In a way it reminded me of high school math where they would give you the answers, but you still had to “show your work”. 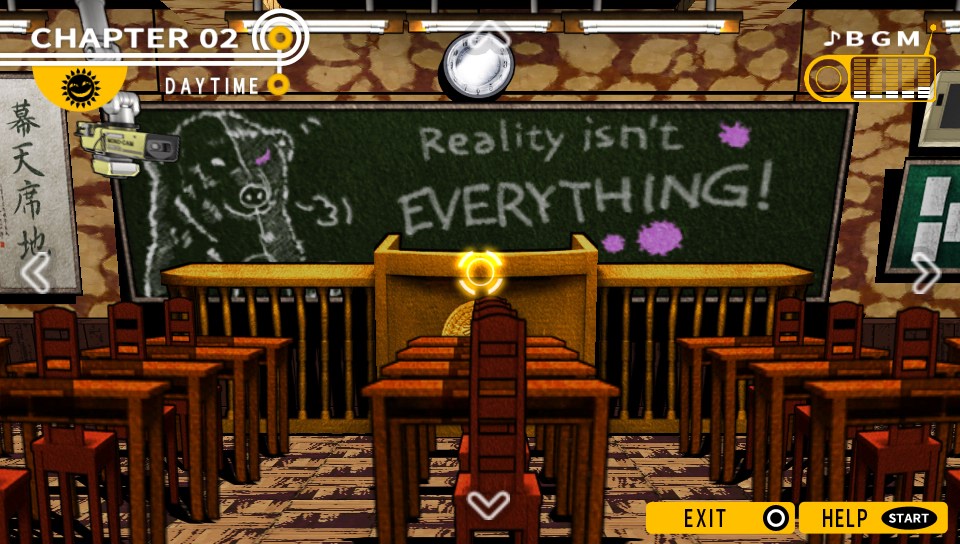 The overall presentation is exceptional and very Japanese with over-the-top characters, colorful and simple backgrounds, intuitive interface, and a font that is large and easy-to-read for hours on end.  The sound and music are great and the voice acting ranged from good to annoying, much like any anime with booming male characters and shrill females.  It was always amusing when somebody actually did speak – usually an exclamation – and it never matched the text.

Danganronpa: Trigger Happy Havoc clocks in at around 20 hours, which is about the length of an entire season of your favorite crime drama.  Not a bad deal considering the amount of fun you’ll have on just your first pass through the game, but once completed a new game mode will unlock that allows you to extend the game using everything you have previously collected.

Fans of murder mystery books, TV shows, and movies are going to enjoy Danganronpa: Trigger Happy Havoc.  With its stylized anime twist in character design and art style, amusing mini-games, and some brilliant writing that will keep you guessing right up to the end, you may think twice about sending your kids to private school – especially one where the headmaster is a psychotic panda bear. 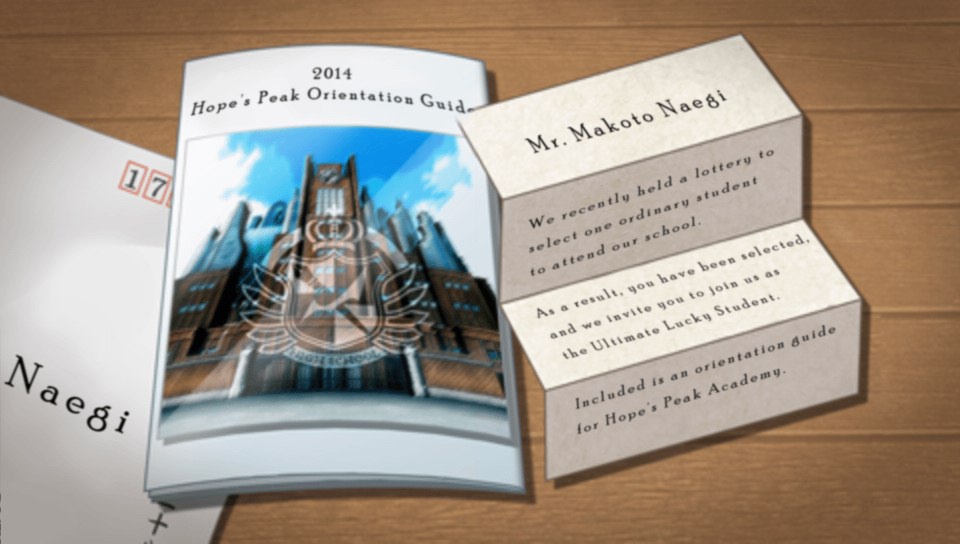 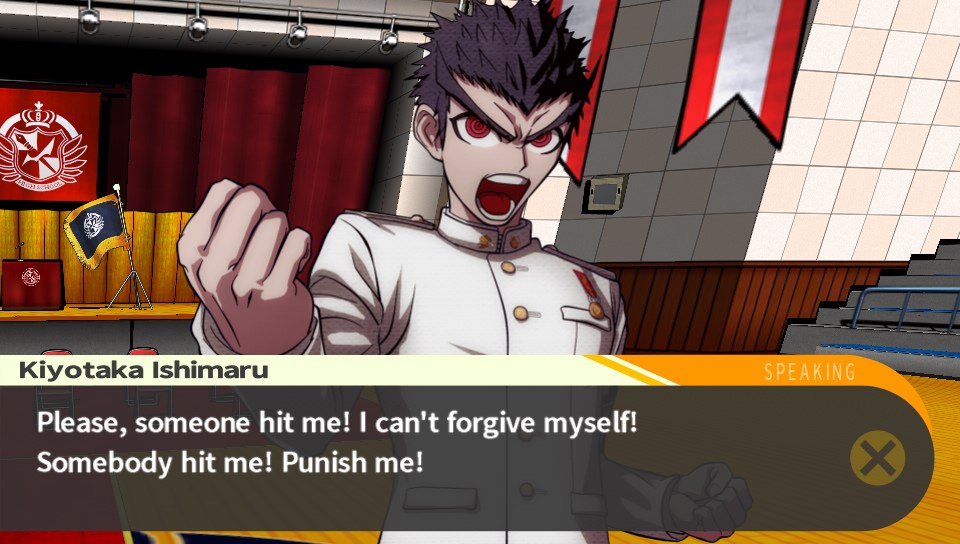 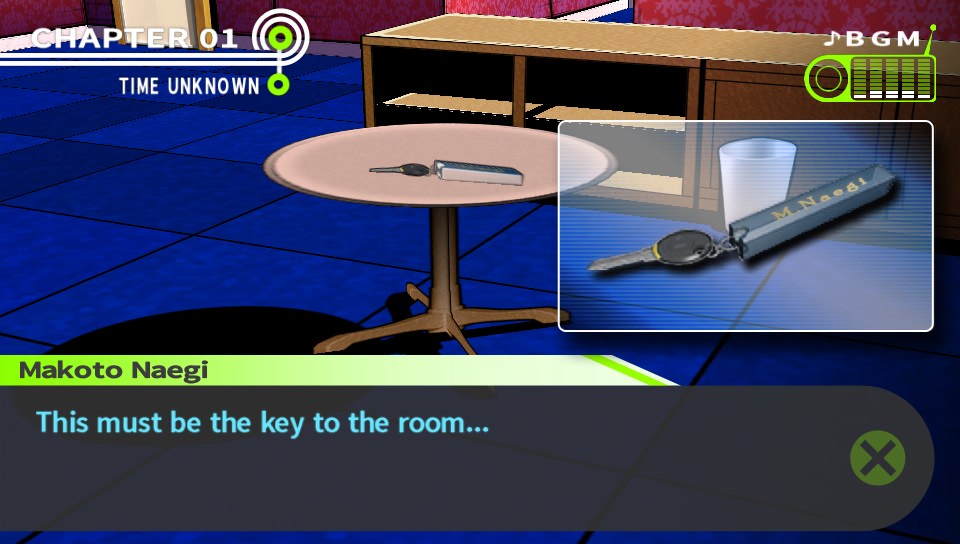 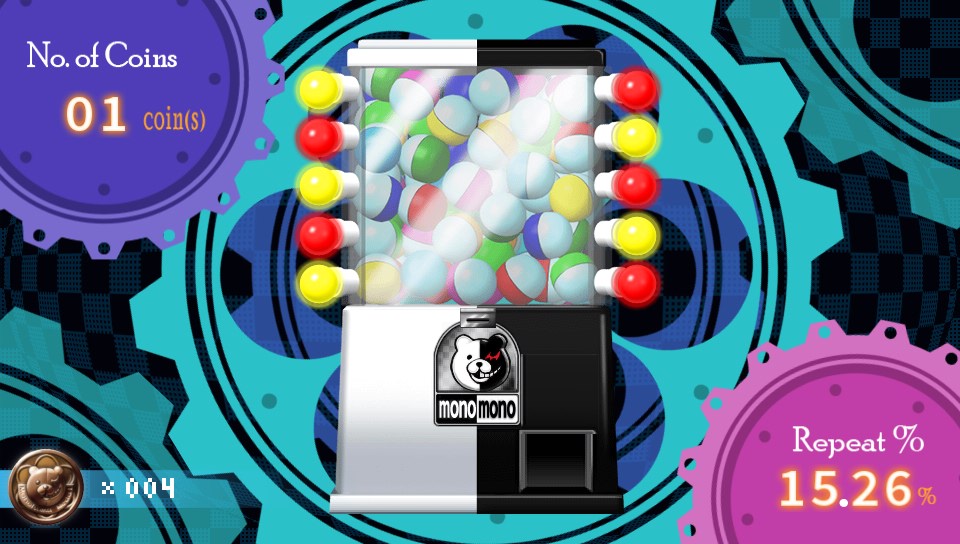 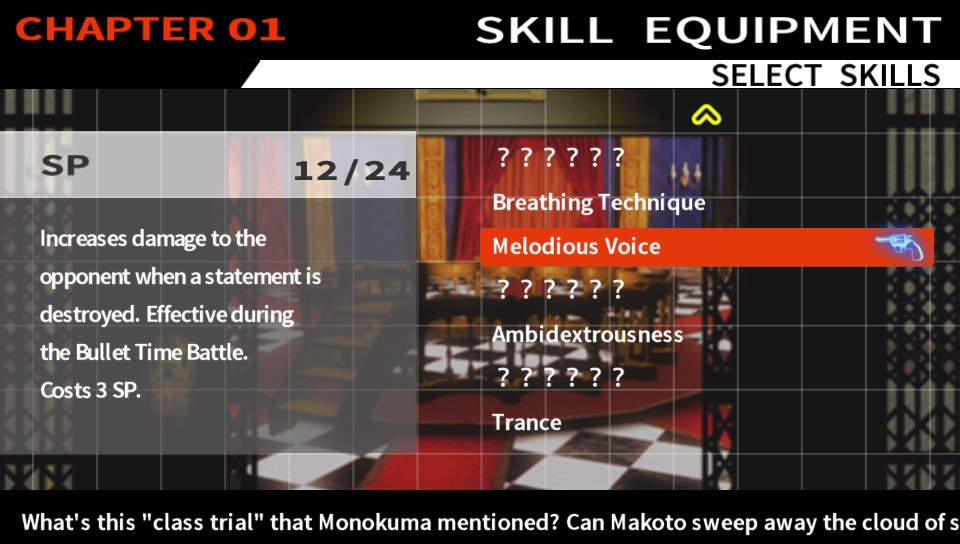 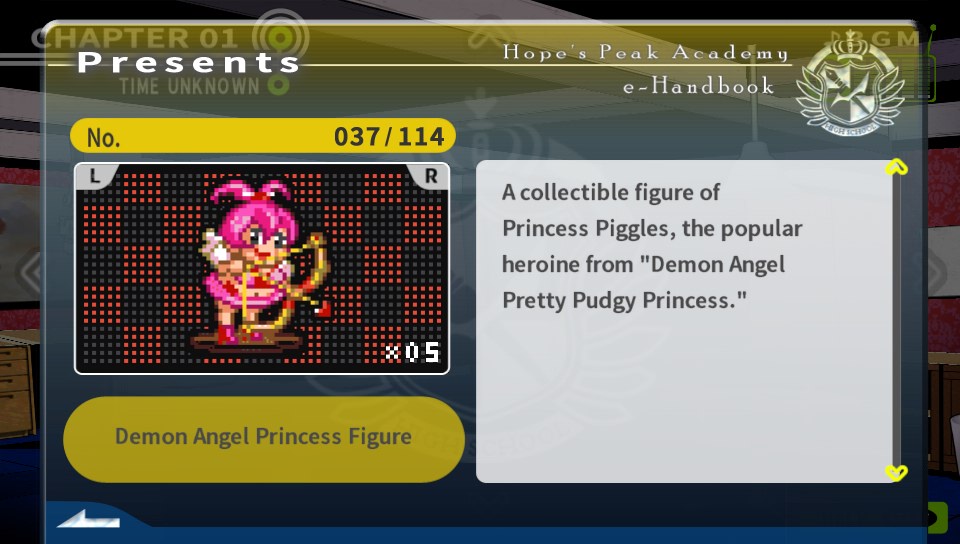 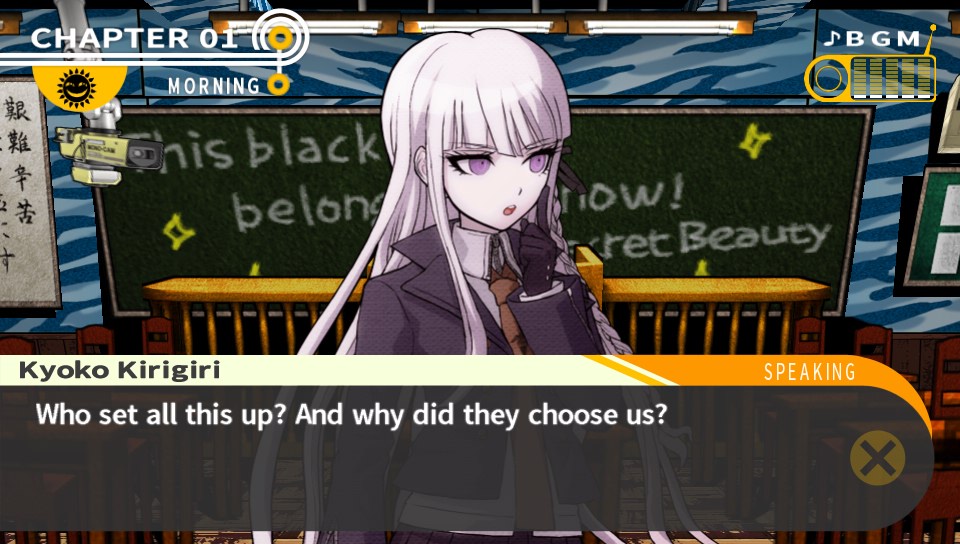 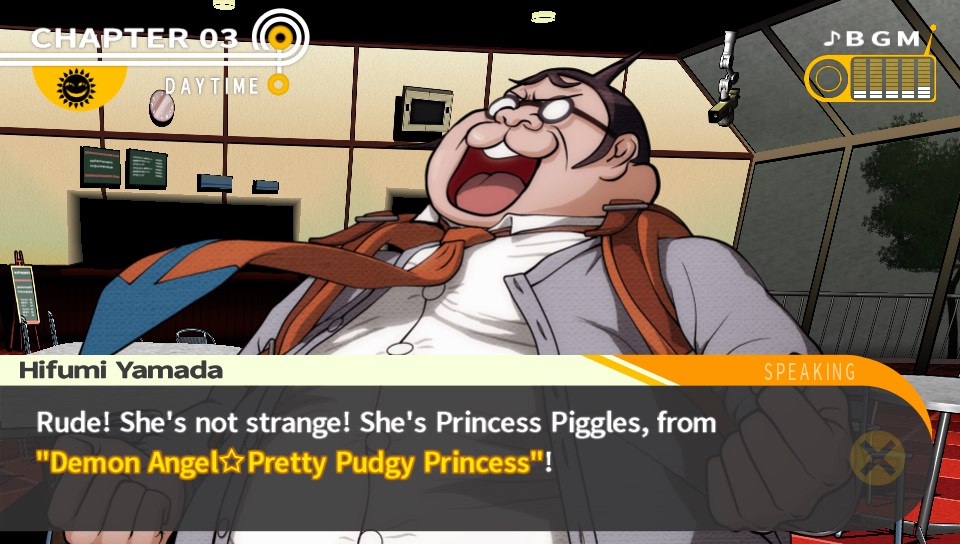 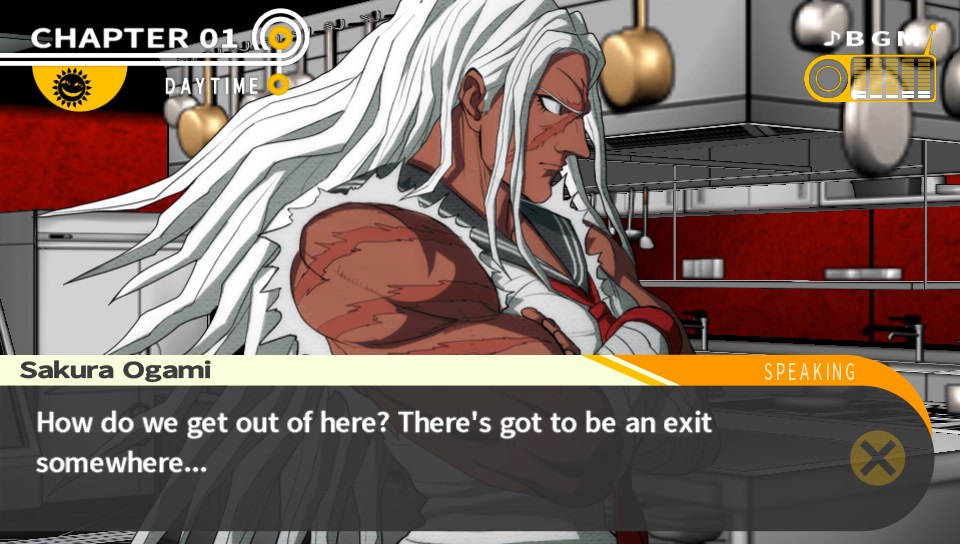 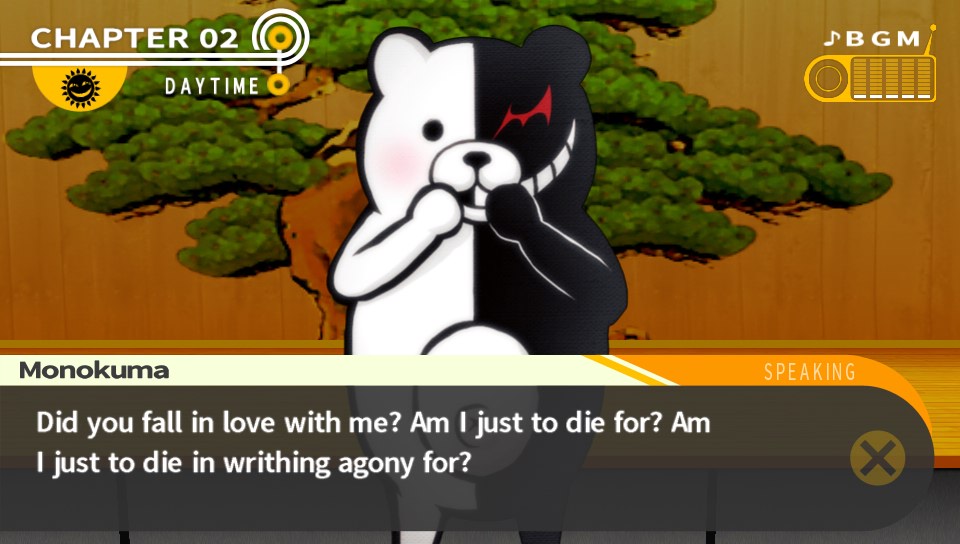 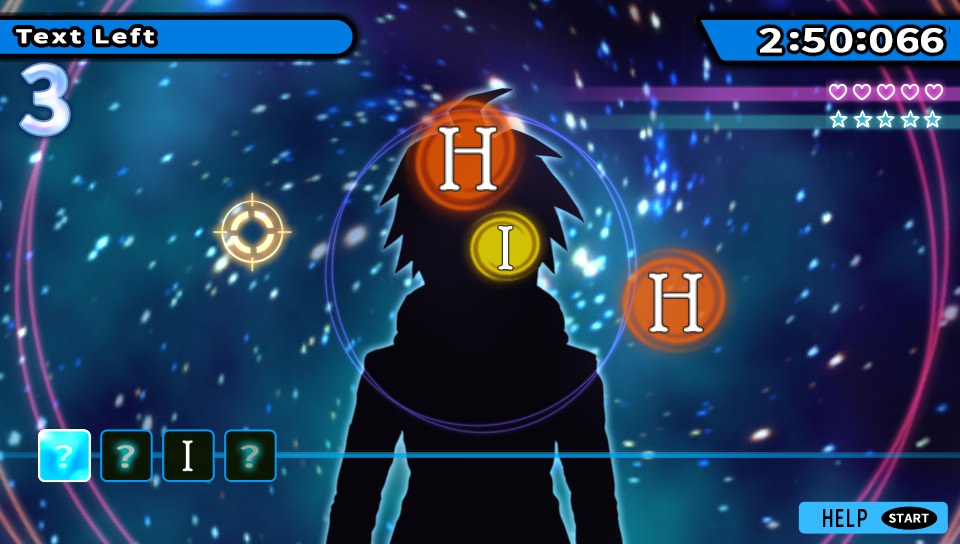 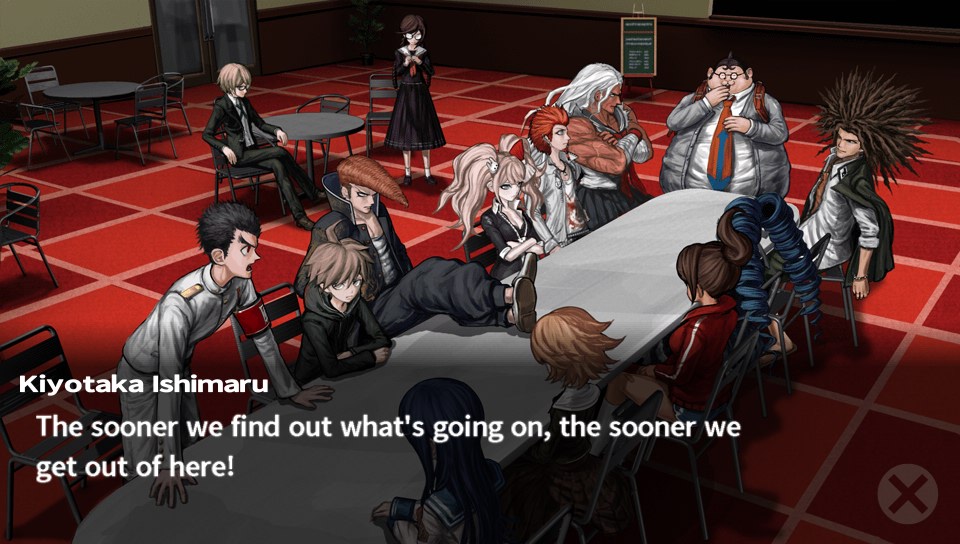 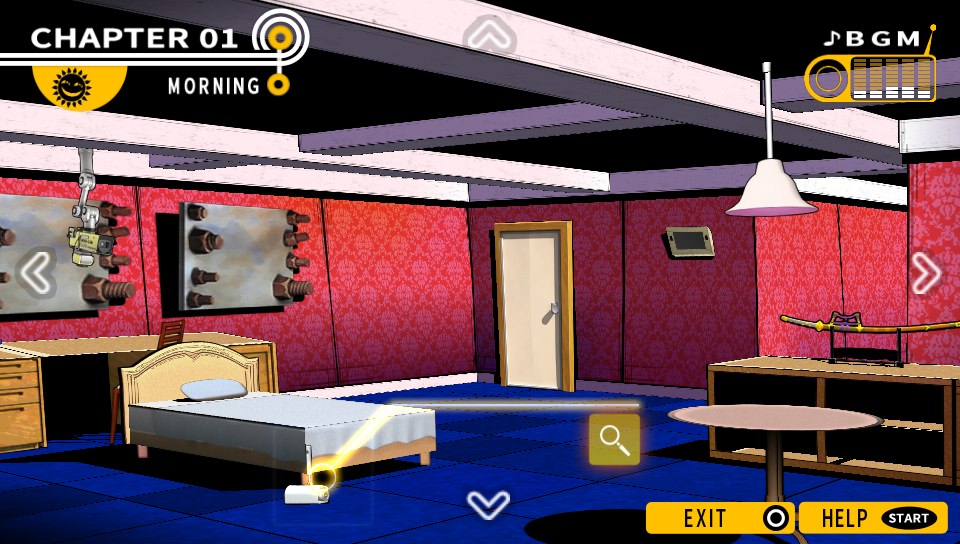 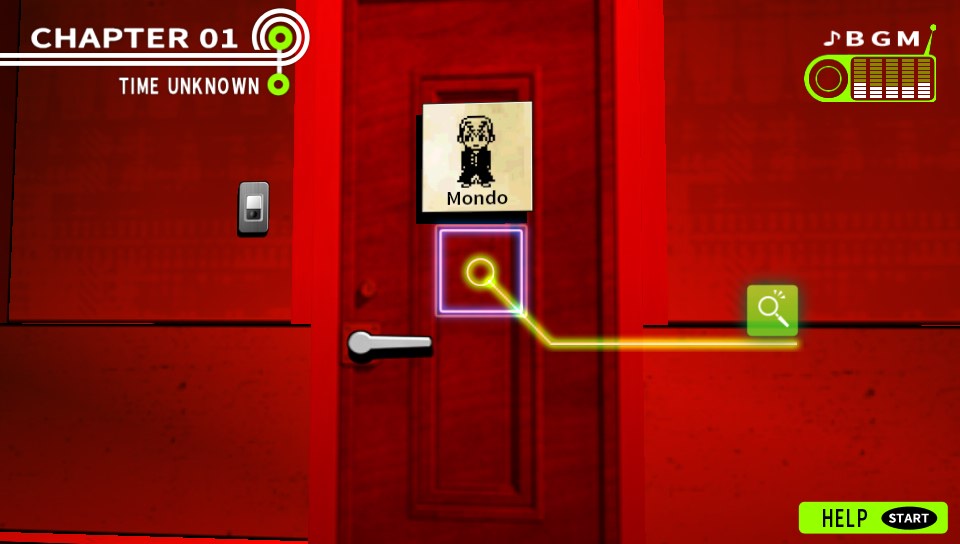 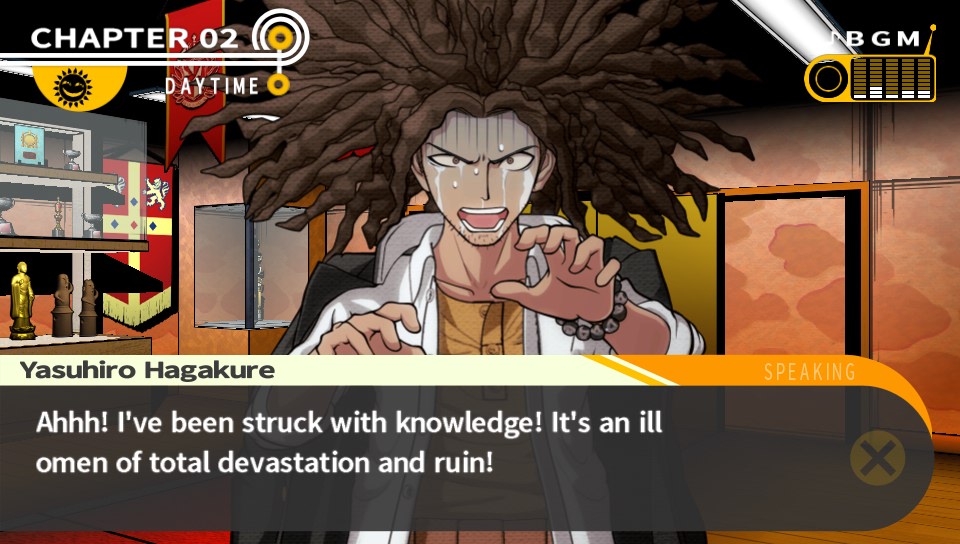 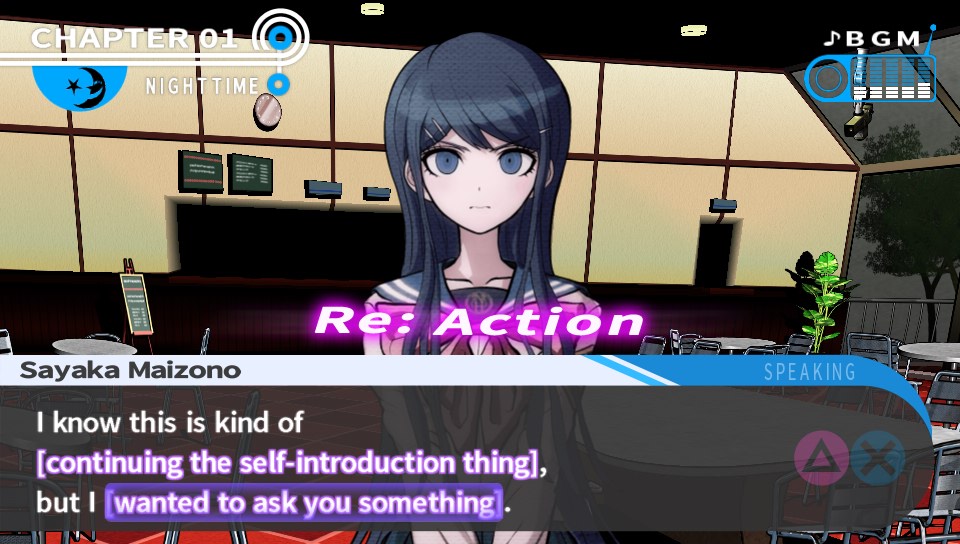 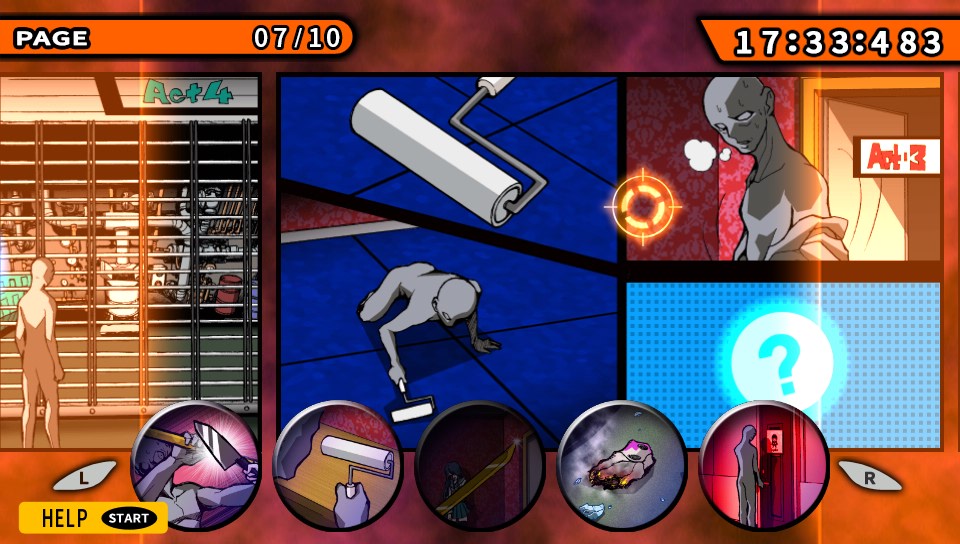 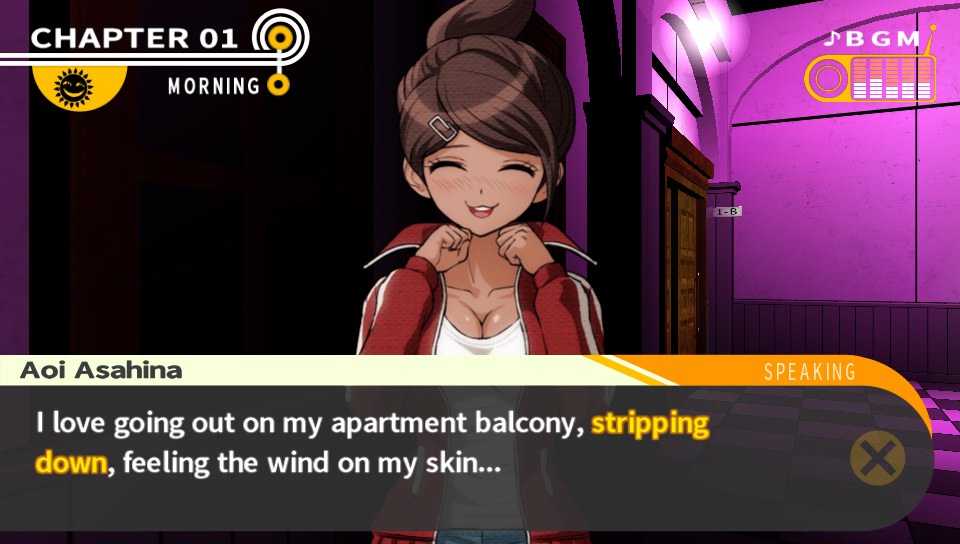 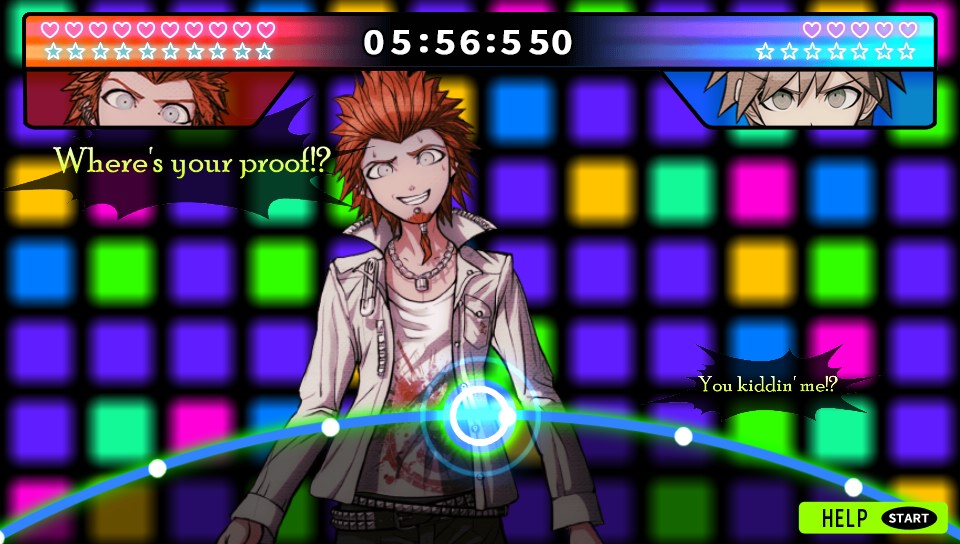 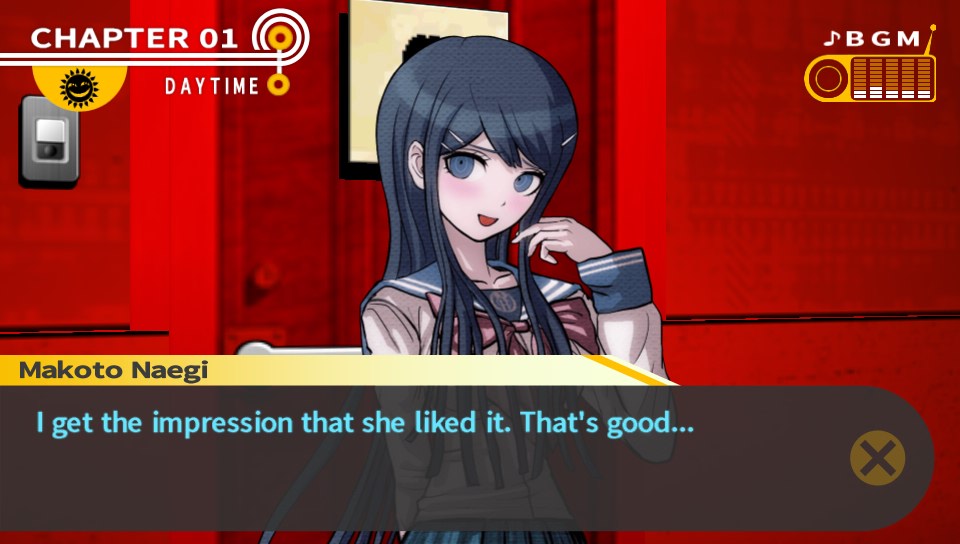