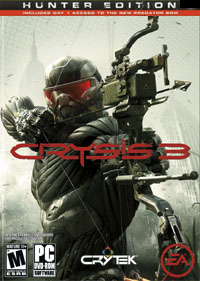 Crytek has a breathtaking engine on their hands, but the game is rather short and shallow.

The Crysis franchise has become the de facto standard by which PC gamers not only gauge the performance of their beloved gaming rigs, but also start spec’ing out their future upgrades and new system purchases every time a new sequel is announced. My last three system purchases have all been more than slightly influenced by the proposed recommended specs for Crytek’s CPU and GPU crushing series, so by the time Crysis 3: Hunted Edition rolled around I knew what to expect and I, or more accurately, my PC, was up to the task at hand.

Crytek and Crysis have now become synonymous for groundbreaking and gorgeous first-person shooters but somewhere along the way Crytek seems to have lost focus on what actually makes these games fun to play. Sure, there are more orgasmic oohs and aahs than I’d care to count, but once the visual splendor of seeing this game running on maximum settings wears thin (about 3-4 hours in) the illusion is stripped away and you realize that Crysis 3 is really no better or more advanced in terms of gameplay than any other shooter out there – in fact; it may have taken a few steps back.

Once again you are Prophet, a super-soldier in a high-tech Nanosuit that enables the player to toggle ammo-dampening armor, activate an invisibility cloak, paint and lock targets using a visor HUD overlay, remote hack electronic devices, and even power-kick cars like a soccer ball. Yet with so much going for it, by the end of the game you’ll realize that you probably never needed or ever used much more than the cloak because Crysis 3 has now become primarily a stealth-infiltration game. 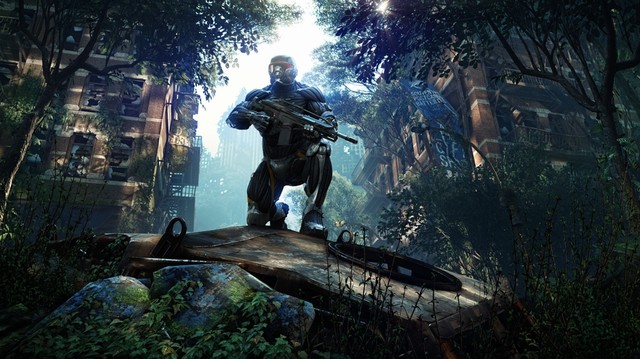 It’s not that the combat isn’t challenging or the variety of weapons and customizations aren’t plentiful, but more that the AI is super-aware of your presence. If your cloak goes off and you are anywhere near an enemy (regardless of their line of sight) you are busted, and once one guy knows where you are, they ALL know where you are, leaving you to scramble around waiting for your energy to regenerate so you can activate your cloak again. Those who revel in confrontation can opt to toggle their shield rather than their cloak and Rambo the levels, but be warned that the AI is devastatingly accurate and only gets tougher in the final third of the game.

The game opens with Prophet being rescued from a stasis pod on his way to Cell HQ to get “skinned”, but an old friend has other plans. In no time you’ll be firmly entrenched in a rebellion movement to thwart some evil conspiracy and a new Ceph threat. Overall, the story is a loose continuation of the narrative that began in Crysis 2 and doesn’t matter all that much. Ultimately, it all boils down to “there are the bad guys…kill them”.

Crysis players don’t come to the party for the story. They want mind-blowing visuals and ear-shattering sounds and music. Crysis 3 is an experience and as such this sequel hits most of the sweet spots. The game opens up in New York City, only a couple of decades have passed since your last stroll through the Big Apple. The gardeners have all left the city, which is now overrun with creeping vines, grass tall enough to hide raptor-like aliens, and sections that look like a bomb went off; all protected by a giant dome and skyscraper towers with deadly-accurate cannons ready to shoot trespassers. These levels exhibit a rare apocalyptic mix of lush vegetation and rapid urban decay that give the illusion that nature is trying to reclaim the city, perhaps more aggressively than the Ceph. 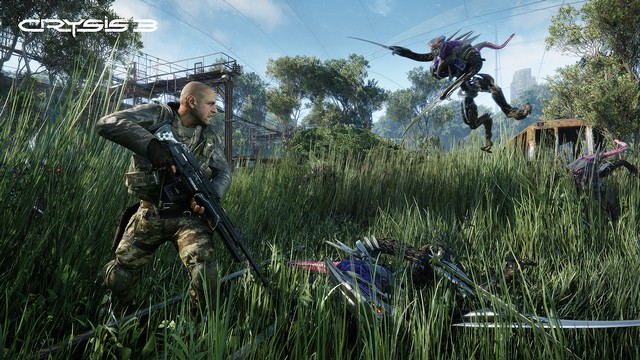 The visuals are further enhanced by some seriously epic music that drives the narrative and the action as well as flawless voice acting and all the expected sound effects; many of which you’ll recognize from past games. Visually and audibly, Crysis 3 is unmatched in technical splendor – a feast for ears and eyes that will set the bar for future games that dare to license this new game engine.

Where Crysis 3 fails is in the gameplay. Aside from the addition of a new bow (because every game now has to have a bow – thank you Hunger Games) there isn’t much new added to the mix, which just makes this feel more like an extension (or $60 DLC) for Crysis 2. Levels are flat and the path through them is usually quite linear. There are few levels that offer much in the way of verticality or multiple paths, which takes a bit of the strategy from the game. Many enemies can easily be circumvented by cloaking and swinging wide, or even better, hack a turret or minefield and turn their defenses into your allies.

And how about that bow? In previous games the use of any weapon other than a stealth kill would break your cloak. Now you are free to dispatch your enemies with electrical or explosive tip arrows with relatively no risk. You can often kill multiple enemies with a single electrical arrow if they are all standing in water. Even with limited arrows (which can be reclaimed from corpses), the bow completely wrecks the balance of the game; at least for the first half where human opponents are usually a one-shot kill. The bow is far less deadly (but still effective) going up against the larger mechs and aliens in the third act. 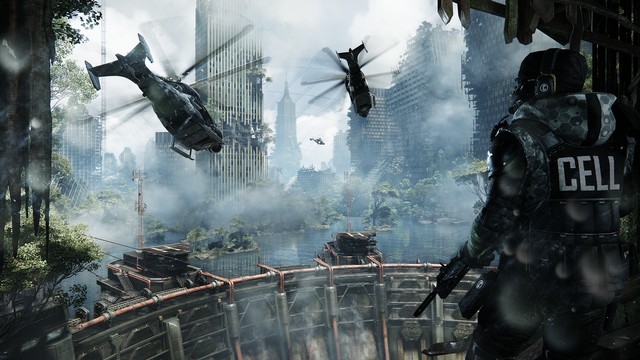 Crysis 3 introduces a new upgrade system for your Nanosuit where you find upgrade kits (points) and purchase various bits of upgrade tech that can be assigned in groups of four in a slot machine-style interface. You can even preset your three favorite mixtures. Upgrades are like Call of Duty perks in that you can increase their proficiency by grinding away at various challenges like performing 100 stealth kills. While your choices of perks are interesting and somewhat varied, the game practically dictates that you funnel all your purchases into stealth extensions and energy conservation.

Crysis 3 tosses in a multiplayer mode because they have to, and the results clearly indicate this was more to appease the narrow-minded suits who think every game has to have multiplayer more than the fans who would be perfectly accepting of a game without it. Give me a great solo experience versus an average campaign and a poor online one. Most of the multiplayer modes just give off that Call of Duty copycat vibe; even when you do have a dozen guys dancing around in Nanosuits. The only mode that really stood out for me was Hunter, a mode that puts two Hunters (in Nanosuits) up against the rest of the playing field who are all normal soldiers but wielding more powerful weapons. It’s a great test of firepower versus Nanosuit mastery, and after the 8-10 hour experience of being a super-soldier in the campaign; it was a refreshing change to feel a bit “naked” and somewhat defenseless while playing as one of the hunted.

I can’t help but think that most of the development for Crysis 3 went into the technology rather than story and game design. Crytek has a breathtaking engine on their hands, and I look forward to seeing what they or anyone who licenses it can do in the future, but for now Crysis 3, while spectacular to behold, is a rather short and shallow game I had to push myself to complete. 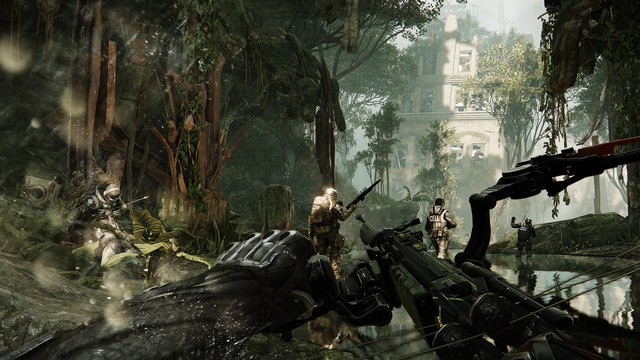 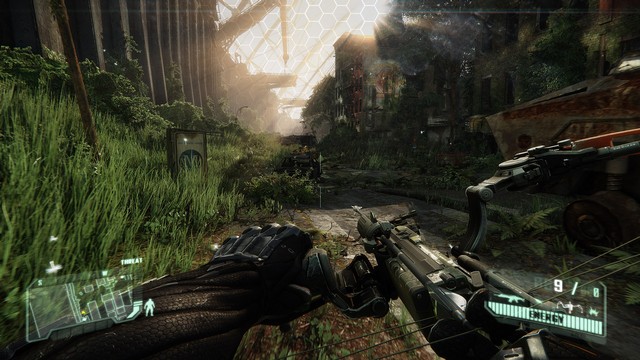 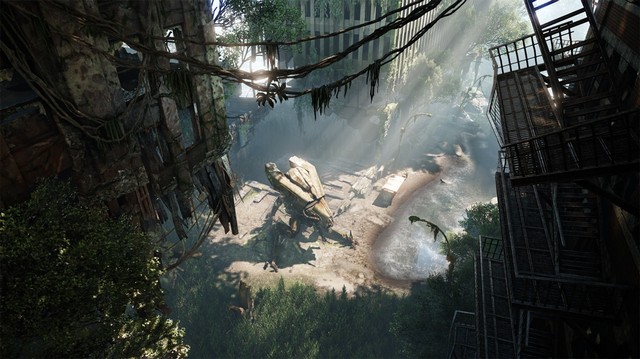 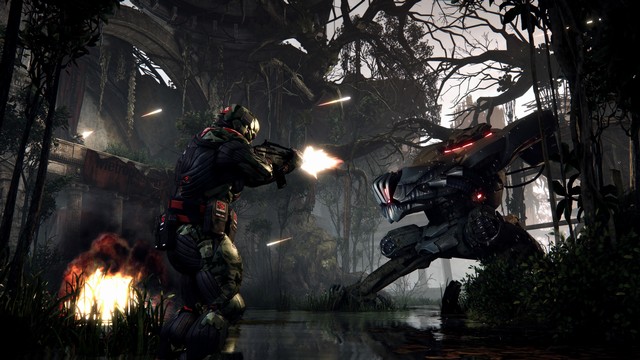 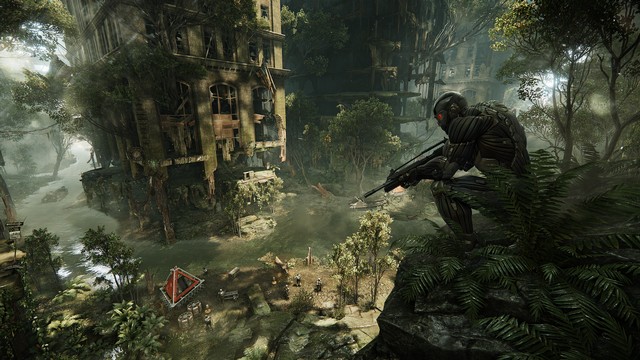 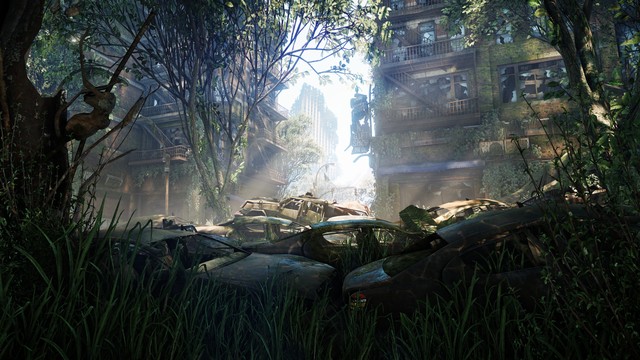 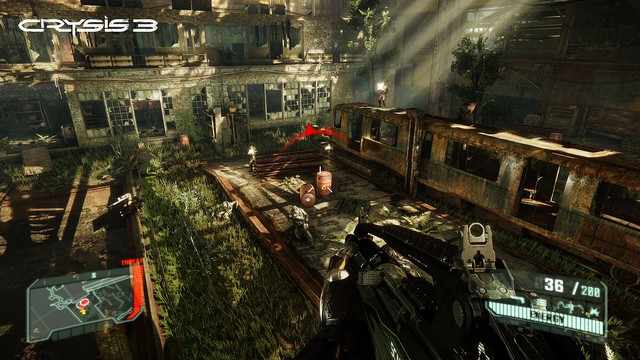 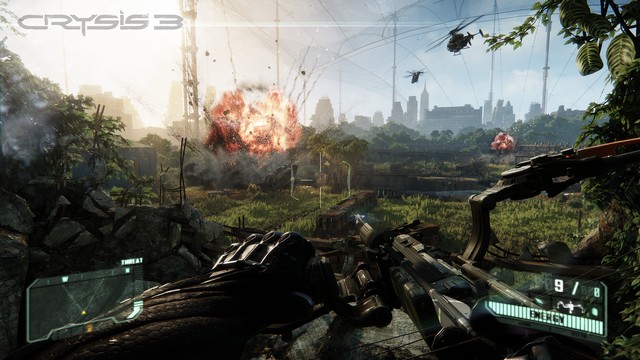 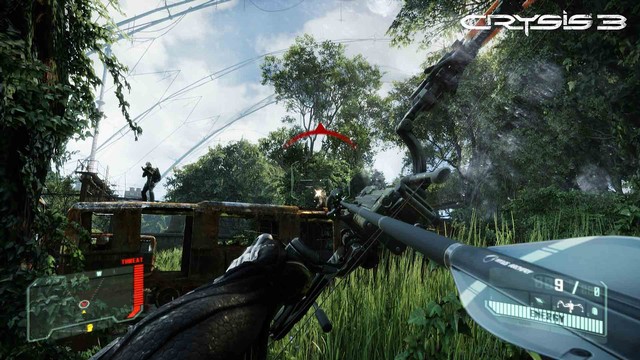 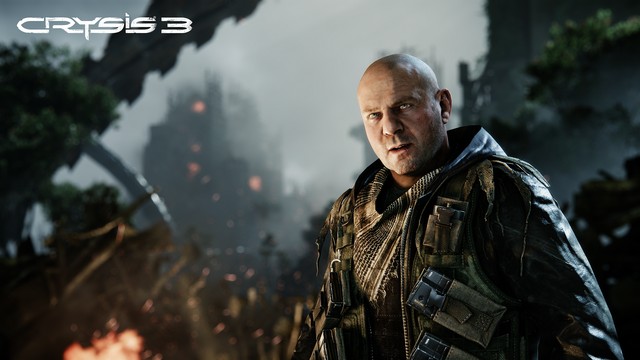 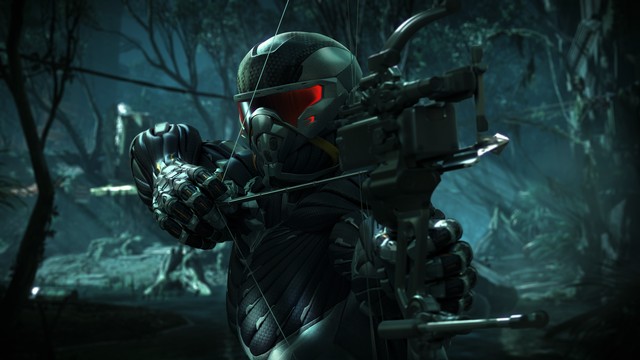 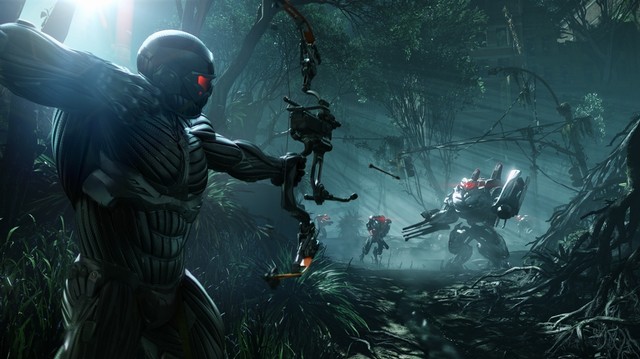 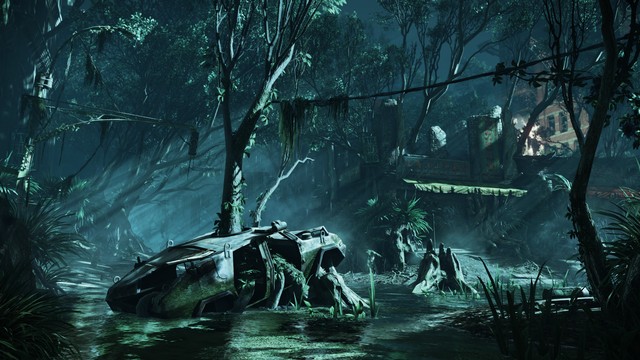 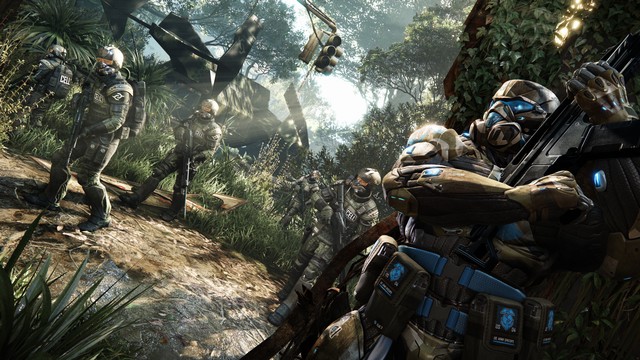 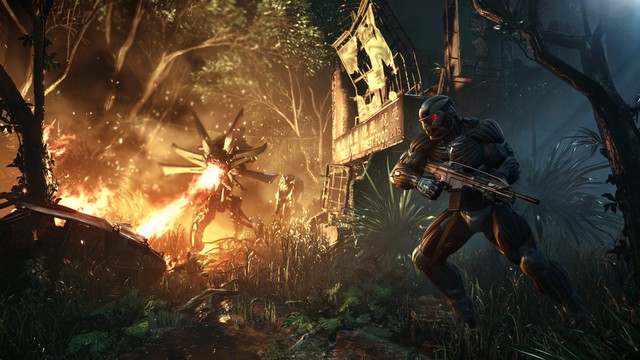 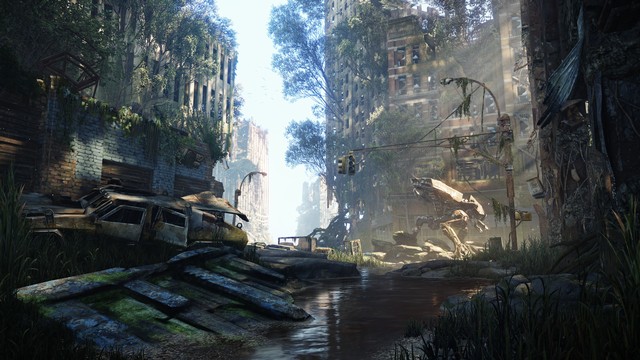 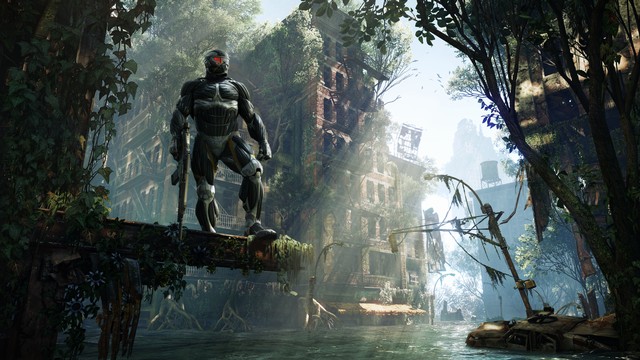