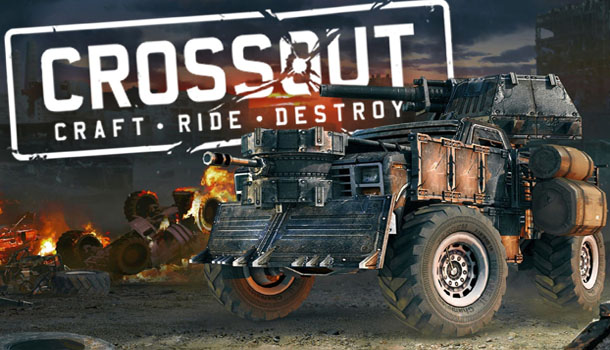 Ask anyone that owned toy cars growing up if they ever pitted their favorite cars in an all-out demolition derby. The chances are that response is likely yes myself included. Fast forward several year and games like Twisted Metal renewed many people’s craving for vehicular destruction. Ever since, the vehicular destruction market had been a bit scarce until now. Enter CROSSOUT, the newest free-to-play MMO, featuring a new kind of vehicular mayhem on the PlayStation 4.

At first glance Crossout appears like it borrows from popular post-apocalyptic media themes in which groups of factions compete in destructive vehicle warfare for unknown reasons. In reality the world has been ravaged by a mysterious virus that decimated the world’s population. Those that didn’t die right away went mad and ended things. The survivors became something more not quite human driven insane with a penchant for chaos and destruction. For others they tried to survive years after the ‘Crossout’ event. So naturally they started bolting on cannons and machine guns to vehicles to defend themselves. 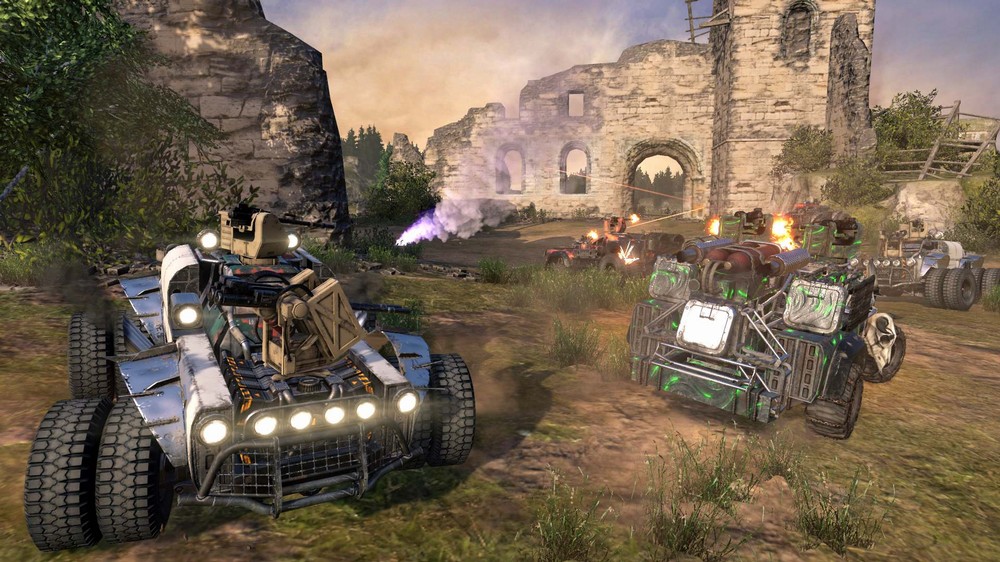 Of course none of that story element is mentioned in the game outside of the Factions that have formed in the aftermath. To find that out I had to explore the game’s website to get background info such as why its Faction leaders have glowing eyes. While that information does put things into perspective for players it will matter little when they dive into Crossout’s main gameplay. Crossout’s very philosophy is “Craft. Ride. Destroy” and that’s just what you’ll be doing as you climb the ranks.

When I first started I got an immediate vibe of another free-to-play franchise but instead of just simply mimicking that gameplay they went another direction entirely. Instead of just picking a vehicle from a list players will start out with a very basic ride with simple machine guns to get a feel of the game with. PlayStation owners also can download a freebie car via the PSN to give them another option. The thing that really set Crossout apart from other vehicular combat games is that you can build your ride from the ground up. Want a cannon? Done. Tank treads? Done. 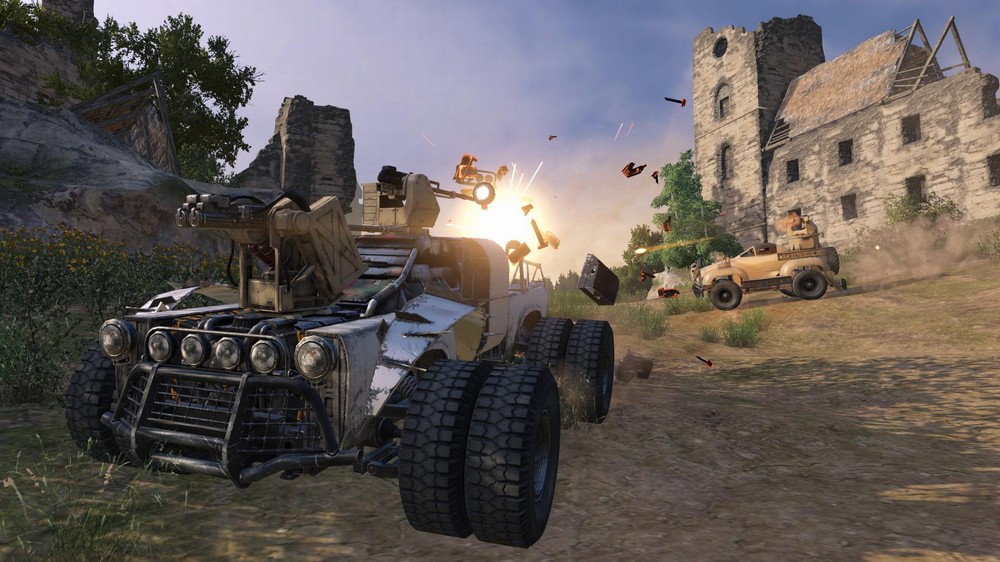 Building a death dealing machine of my very own was easy my favorite thing about Crossout. While going big right out of the gate sounds great it’s often best to start small. That and you have to gain parts and resources to create bigger and better vehicles. Once a vehicle is created a blueprint can be saved to recreate that vehicle at any time parts allowing. The main reason for that is that you can only have one vehicle in your garage bay at any given time. Parts can be earned in battle or crafted in each of the faction’s menus with resources earned on the battlefield. Of course some blueprints can only be accessed once you rise high enough in rank with the desired faction.

There are five factions in total but four of them can only be accessed after getting the starting Engineers faction to Level 10 or 25 in one case. To do this players must head out into the battlefield in one of the four combat heavy battle categories: Missions, Raids, Brawls and Clans that are unlocked as you rise in levels. Missions, Brawls and Clans make up the meat of Crossout’s PVP experience while Raids are smaller PvE ventures. The tradeoff is that Raids require Fuel that is depleted in varying amounts depending on the activity. To keep players from farming this mode you have to wait each day for your Fuel to replenish daily. 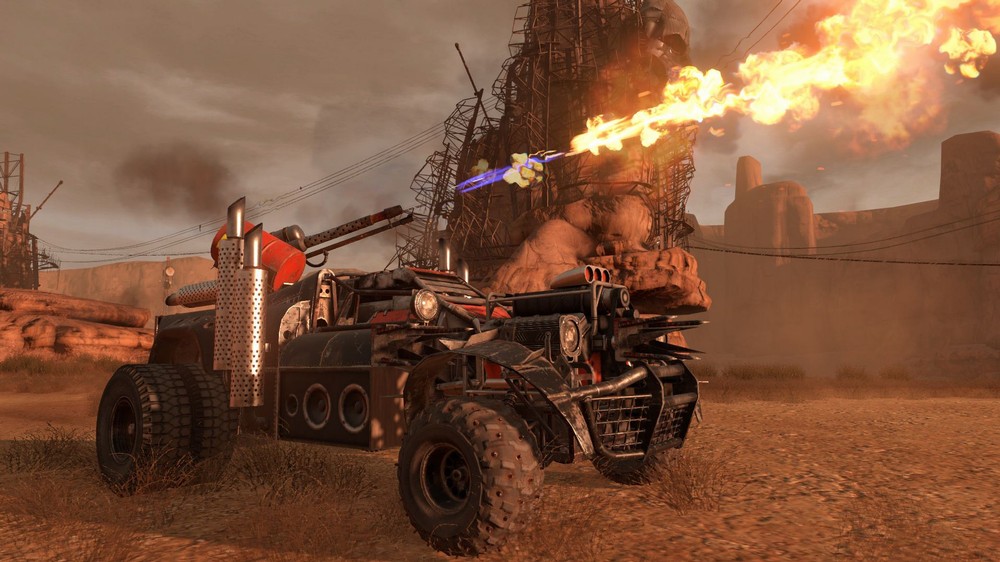 Crossout isn’t just about the enjoyment of building your own vehicle but also the thrill of taking it into battle and blowing up your opponent’s own carefully crafted vehicles. The biggest difference here with Crossout is that this isn’t just a shoot anywhere and the whole vehicle takes damage kind of game. Remember each of those carefully placed parts? Each of those parts can be destroyed individually based on where you or your enemies are aiming. To make things more interesting destroyed parts with immediately impact the performance. So do will you take out the tires leaving them stranded to the wolves but still with some artillery bite or do you leave them defenseless by knocking out their firepower? The choice is yours.

Ultimately though, in Crossout it’s about finding that balance. Having the biggest vehicle on the field isn’t the best option. Sure you can take a beating by having a higher vehicle rating based on the sum of the parts used but that just makes you a bigger target. For example I used altered version of the vehicle “Armored Turtle” provided with my review pack for a good spell and while I could deal out some serious damage while slower moving I was often the most targeted player in PvP matches. I couldn’t really outmaneuver the sprier buggies though and with enough power focused on me I’d go down. 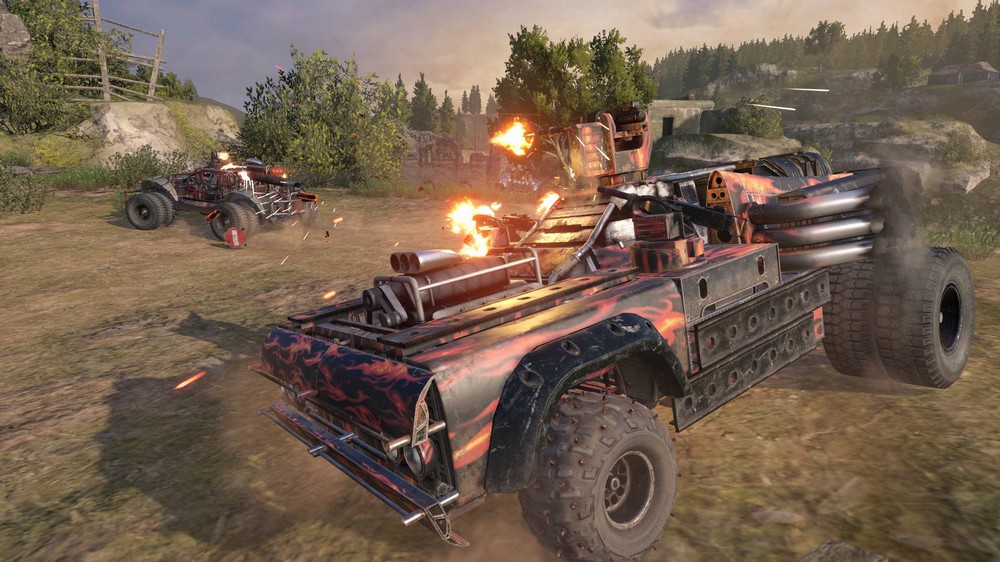 One of the other cool features of Crossout is the community aspect. Every part you collect or craft can be sold in the in-game market and every design you create can be shared and downloaded by others. You just have to have the parts to build it yourself. The game does let you know if you are missing components which is cool. This may be best explored by those that have had time to build use a sizable or variety of parts before messing around with though. It’s actually been interesting to see what the community has created thus far. Seriously the Simpsons Couch complete with family! That’s just cool.

Of course all of the parts you can buy do take currency to afford. Most of this can be earned by simply earning it by playing or from parts sold to other players. As Crossout is Free-to-Play that also means micro-transactions as well. For players that so chose to you can spend real money to purchase in-game credits so you can buy parts a little faster. Now in most F2P experiences that I’ve encountered this usually creates a rift in the player base since payed for stronger weapons/vehicles often outclass players with basic gear.

So far I haven’t really experienced that here. Players are also limited by an energy system that stops player from decking their vehicles with weapons to the nines. At most I only had 3 weapons mounted at any given time during my sessions. The ultimate problem that Crossout may encounter though may fall within its market where the cost of resources will ultimately cause the biggest rift in player strength that ties back to the micro-transactions. 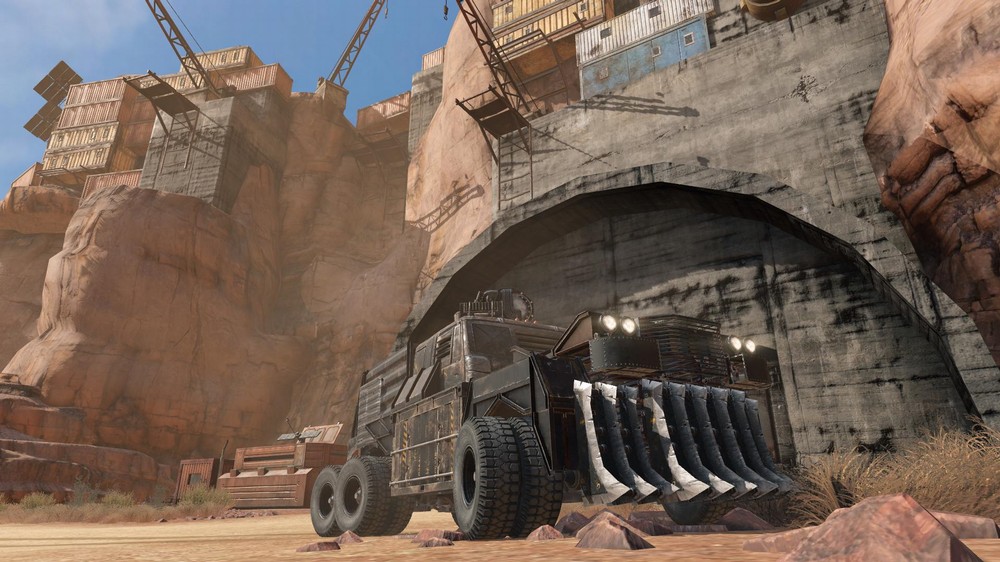 Crossout not only features solid crafting and combat but carefully designed battle arenas and levels. Players are offered varying levels of terrain allowing for tactical advantages and defense in maps that range from derelict urban areas to hill filled desert and forested areas. The sound effects are on point too as the vehicles and weapons all sound great. The only hindrance for me is that the user interface is a little awkward to maneuver.

At the end of the day, Crossout was a rather enjoyable game which is awesome since I’m not at my strongest with games that contain freeform crafting. The developers give you the ground rules and the rest is really up to you. It’s been a satisfying experience all around though as I felt that I wasn’t necessarily locked out of things by some outrageously lofty requirements. The biggest enjoyment for me was ultimately crafting my own creations and testing their strengths and weaknesses on the battlefield. The rest, like destroying my enemies…pure gravy. If you like largely PvP based MMOs then you got to try Crossout today for the PlayStation 4.