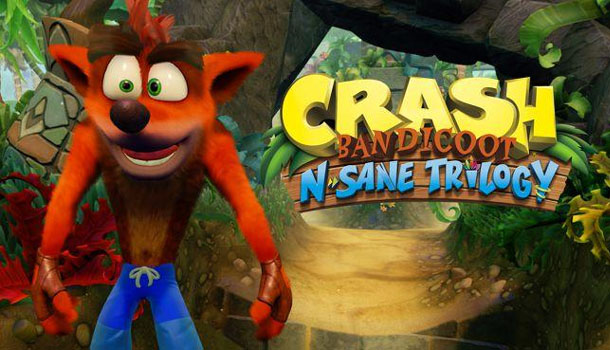 A great trip down memory lane and a great platformer for first timers.

There are often thousands of games that come out over the course of a console’s lifetime but only a very few of them ever achieve iconic status. For the PlayStation family back in its early days nothing was really more iconic than Crash Bandicoot. Now personally I would counter that with Tomb Raider but Crash was easily the more player friendly of the two seeing that it harks from a similar vein of popular platformer. Well it’s been 20 years since the iconic orange “fox” arrived on the screen and he’s back better than ever with the release of the newly remastered Crash Bandicoot N.Sane Trilogy for the PlayStation 4.

Mostly my exposure to the zany Bandicoot was playing on a friend’s console as I didn’t have a PS1 at the time until later but nevertheless it was fun and in hindsight just as challenging as it is today. That said, fans have been asking for the proper return of Crash for years and while he did make an appearance in another Activision property recently it just wasn’t the same. This new collection featuring all three of the original Crash Bandicoot games: Crash Bandicoot, Crash Bandicoot 2: Cortex Strikes Back and Crash Bandicoot 3: Warped from the PlayStation 1 era brought back with a complete visual and audio overhaul. The beauty here is that you can play the games in any order you want all in one place. 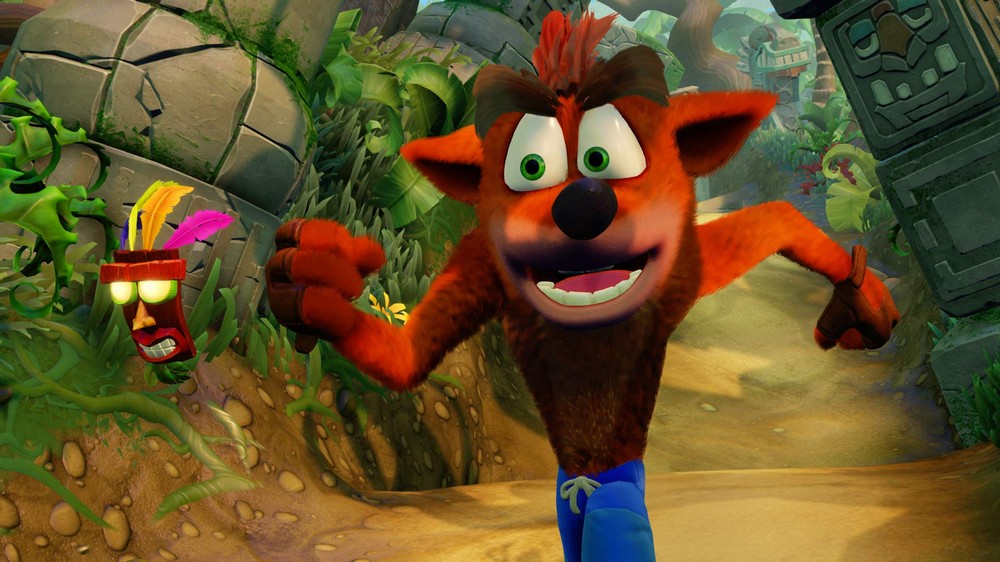 While many at least know who Crash Bandicoot is, they may not know his story from the very beginning. Crash is an experiment gone wrong by the hands of the series’ antagonist Doctor Neo Cortex. After escaping by jumping/crashing out a closed window, Crash then spends the rest of the original game trying to rescue the female bandicoot Tawna Bandicoot (girlfriend) and stop his plans for world domination. Throughout each game he is aided by the wooden mask Aku Aku, who not only guides Crash and later Coco but acts as a protection power up allowing for Crash/Coco to take an extra hit before defeat. Collecting three Aku Aku masks in a single level gains the Crash/Coco temporary invulnerability though it cannot save them from pitfalls.

Throughout this collection several universal constants are found in each title. Primary is the need to break boxes by either jumping/bouncing on them or using Crash’s signature spin attack. There are certain boxes that must be avoided such as the TNT and Nitro boxes as they are instant deaths much like being hit by any of the enemies. Breaking boxes more often than not reveal fruit that can be collected as well as life tokens (Crash heads), Aku Aku masks and Tawna tokens. Destroying the boxes is more pertinent to fully completing each level than gathering the fruit but both are equally important. For every 100 fruits you gain an extra life and trust me you want as many lives as you can gather – and not just for the 99 lives trophy. 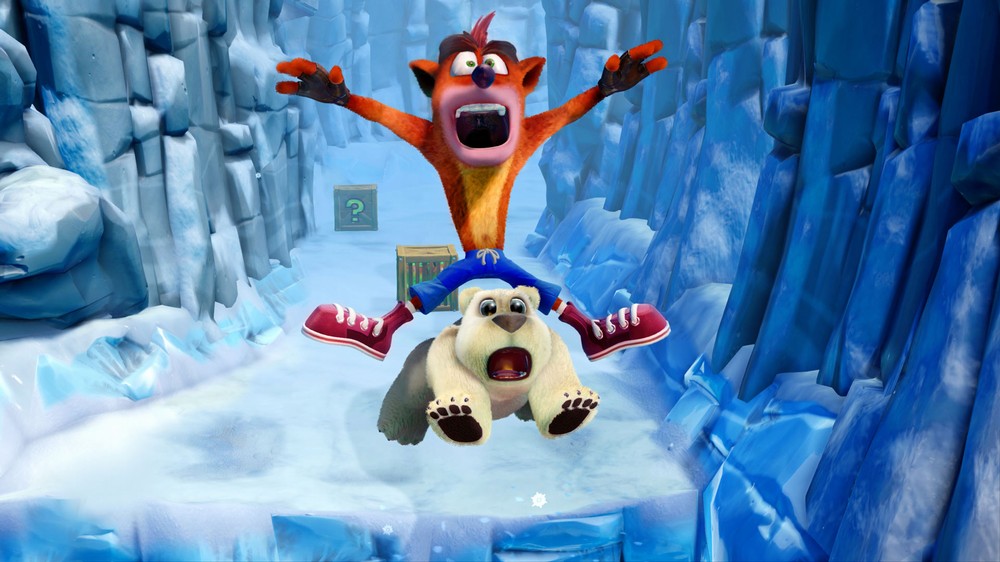 For a series that is 20 years old it is extremely obvious of the advancements that the series has undergone even in the original three games presented here. While the latter two games support Analog stick controls like their original counterparts, it’s the original Crash bandicoot that has received the most benefits here. Players can choose without any configuration to utilize either the added Left analog stick support or the tried and true D-pad as it was played when it first hit stores. While the Analog option may seem like the obvious choice by today’s standard I would actually caution against it. In my experience the D-pad is the more favorably option, especially in the first game for a few reasons. Chief amongst those is the fact that while the N.Sane Trilogy as a whole is largely faithful to its progenitors small changes have been made with the levels and by association how Crash and Coco interact with them.

I have played all of the original game prior to this review like probably so many others, so for us these changes are more noticeable even after all these years than to a new player playing Crash for the very first time. At first I thought I was maybe really just rusty having not played a Bandicoot game in years but no, it wasn’t just my ability to play. With the reworking of enemy animation and how Crash/Coco interacts with the world the hitboxes for many of the enemies and even environmental obstacles have been slightly altered making some already tedious levels even more so when precise movements are needed. Sometimes the only difference between surviving and defeat is a split second action on your part like when jumping over gaps. 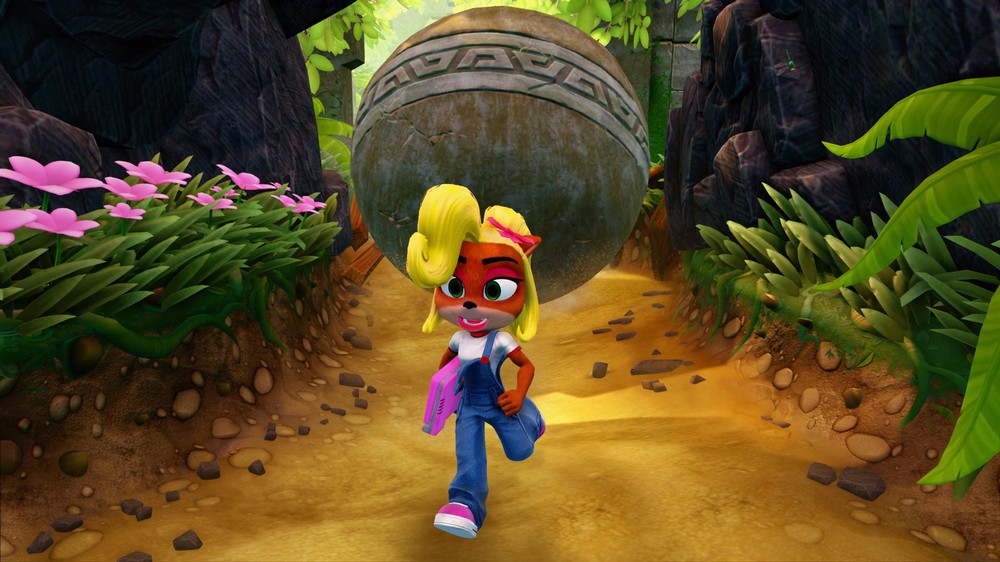 Again, it’s mostly only the first game in this collection that suffers the most from these gameplay changes as the other two are more refined and not as unforgiving though timing is still a very crucial element. It’s not all bad and the original Crash Bandicoot is still enjoyable and contains a few new features to boot. First, you have the ability to replay a level and get through it as fast as possible with the newly added Time Trials and online Leaderboards. The second feature however is probably the coolest that affects the first two titles. After defeating each title’s first boss respectively you gain the ability to play as Coco for the first time outside of Warped. However she is restricted from any level that features driving or boss fights as that would have probably have changed the game too much despite Crash and her having identical move sets.

Crash Bandicoot 2 and 3 are favorably easier to play not only because of the Analog sticks but their overall forgiving nature. This doesn’t make them particularly less challenging as the hitbox issue carries through to these sequels as well. Crash and Coco both have a few extra moves compared to the first game such as a Ground Flop and being able to crouch. The level designs are also a lot more open because instead of just running towards or away from the screen you often get sections of sidescrolling in there as well outside of special areas. While they are just variations of the traditional Crash gameplay mechanics, the driving and in one case underwater craft levels are an awesome change of pace that still feels right at home in a Crash game. 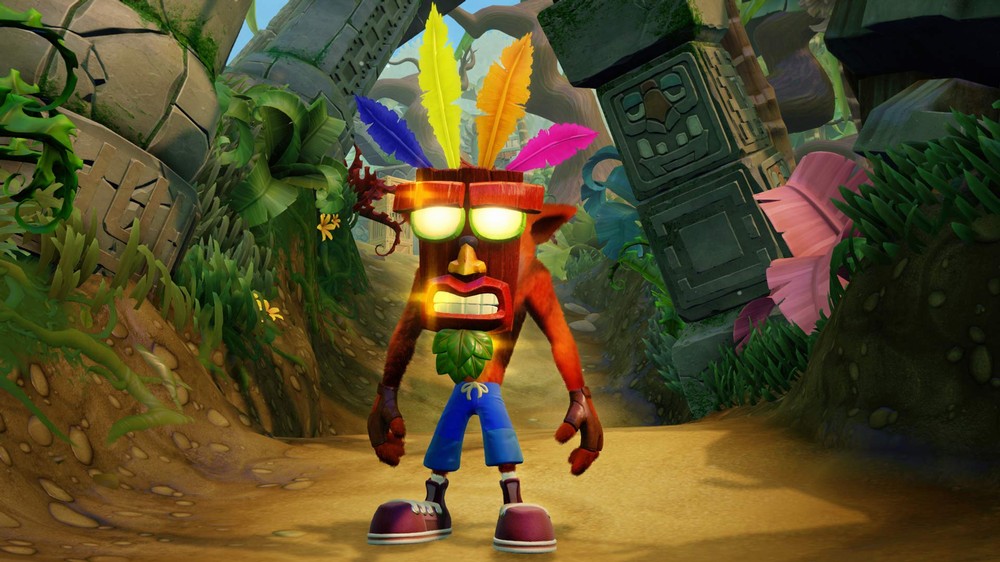 Of course the big thing to talk about the Crash Bandicoot N.Sane Trilogy is the visual overhaul. As one of PlayStation’s oldest platformer franchises by several years its complete ground up remastering was a much needed one. So Vicarious Visions has worked hard to bring Crash to a whole new generation of gamers and back to those that grew up with him into stunning High Definition. Note I didn’t say Ultra High Definition. Everything in the N.Sane Trilogy looks amazing as it is and if you are an owner of the PS4 Pro then the game is enhanced even more to run at their self-labeled N.Hanced Fur-K so you can see Crash Bandicoot’s world pop off the screen in upscaled Fur…um 4K resolution at least. Sadly there is currently no HDR support which is a bummer as Crash’s visuals would have exploded off the screen.

Not only have the levels been redone using Naughty Dog’s original level geometry in amazing detail but also the character models, music and cutscenes. The detail in the Bandicoot families fur is incredible as well as the updated supporting cast and enemies. Vicarious was able to bring Crash and Coco back with more emotion than ever before including a rather cool “transition” intro from original graphic to the new ones. The music, while rescored, is still just as iconic as I remember it to be.

At the end of the day with all of the tweaks and remastering that Vicarious Visions has done the Crash Bandicoot N.Sane Trilogy still made me feel right at home as if reconnecting with an old friend that I haven’t seen in years. Sure there are some quirks that make a challenging experience even more frustrating and challenging but it still didn’t hinder my enjoyment. The newly added features and ability to play as Coco in all three titles are both welcome and nice touches that I’m sure any Crash fan will appreciate. It’s been a long time coming but I can easily say this is one long trip down memory lane worth taking or experiencing for the first time in this PS4 exclusive. 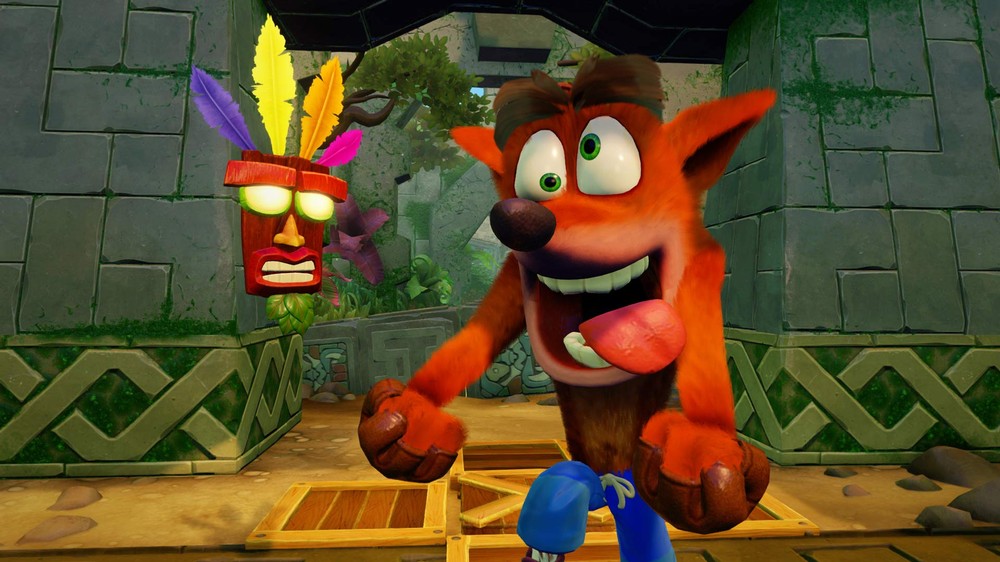 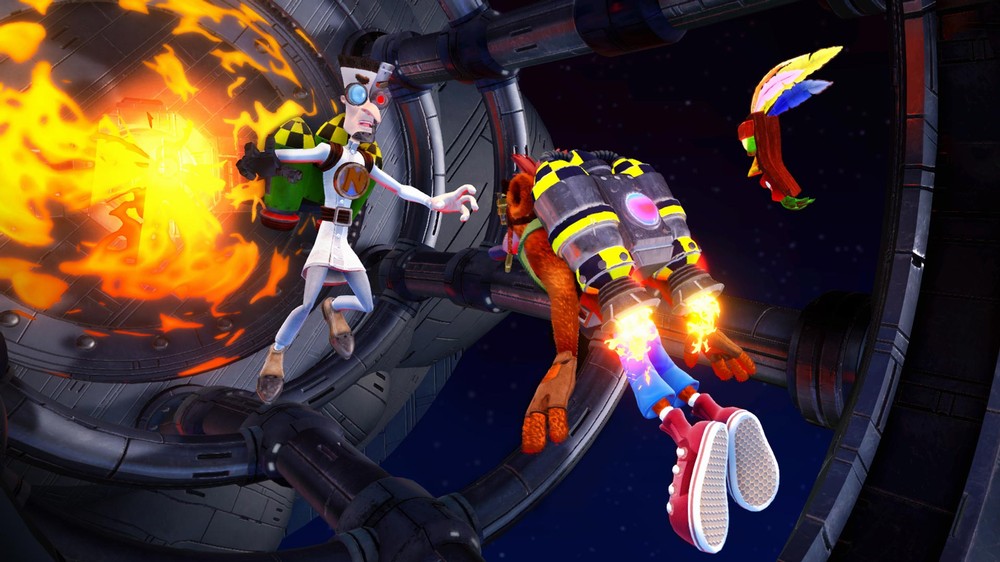 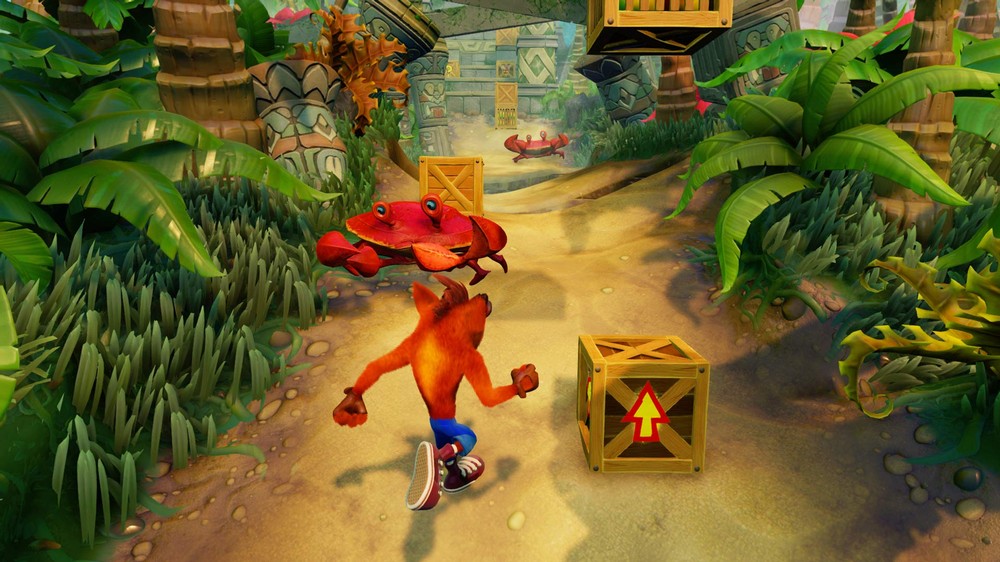 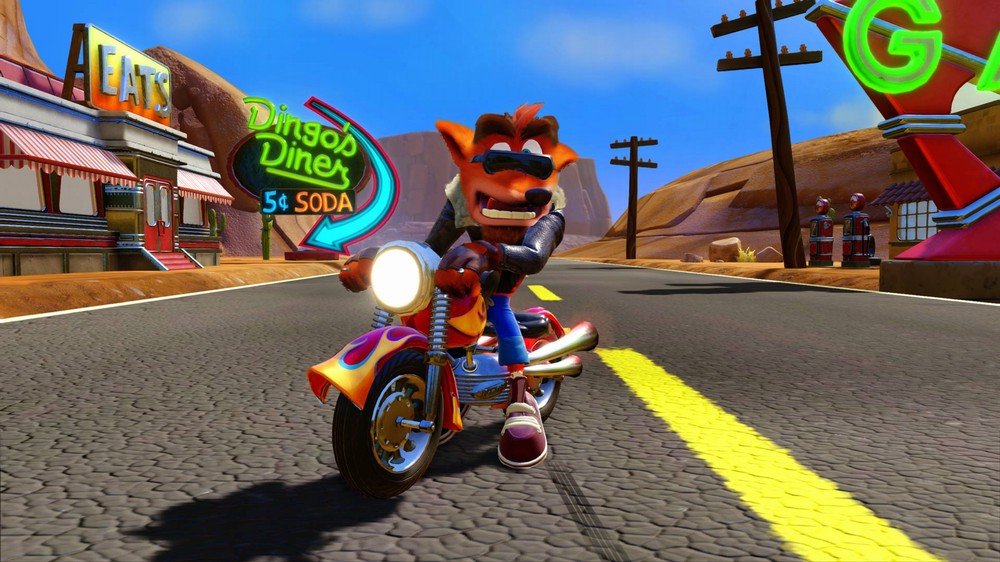 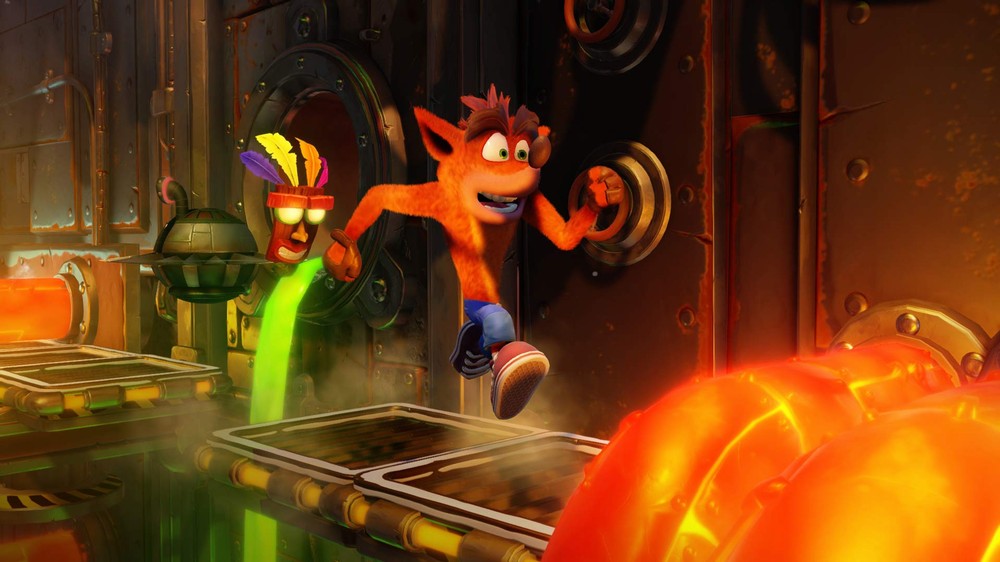