Very short game with lots of unanswered questions. No reason to replay after finishing.

A bold experiment in using light and shadows to create a world within a world that is worth your time and money.

If you’ve been waiting for that one memorable indie game of 2013; a game that oozes with style and presentation; a game that can whisk you away to a 1920’s version of Paris (or whatever dreamlike European city this is supposed to be) then look no further than Compulsion Games new puzzle-platformer, Contrast.

In Contrast you play as Dawn, the imaginary friend of young Didi, an imaginative and curious pre-teen whose mother is a buxom nightclub singer and father is a get-rich-quick con man looking for his next big score.   Didi has no problems sneaking out at night to explore the city, which has gotten her mother in trouble with social services.  The game is set in a fictional, almost gothic-like European city where streets will inexplicably crumble away into an bottomless chasm for no other reason than to create a puzzle to solve.  Buildings exude a classic art deco architecture punctuated with Broadway style lighting creating a wholly unique film noir experience that, when combined with the exaggerated character designs could easily pass for a Tim Burton movie.

The first thing you’ll notice is that Dawn and Didi are the only physical beings in this universe.  Everyone else in the game appears as shadows, which allows for some unique interactions and visually stunning moments of storytelling.  Early on you’ll witness an argument between your mother and father as their shadows are cast, larger than life like a drive-in movie on the side of a building. 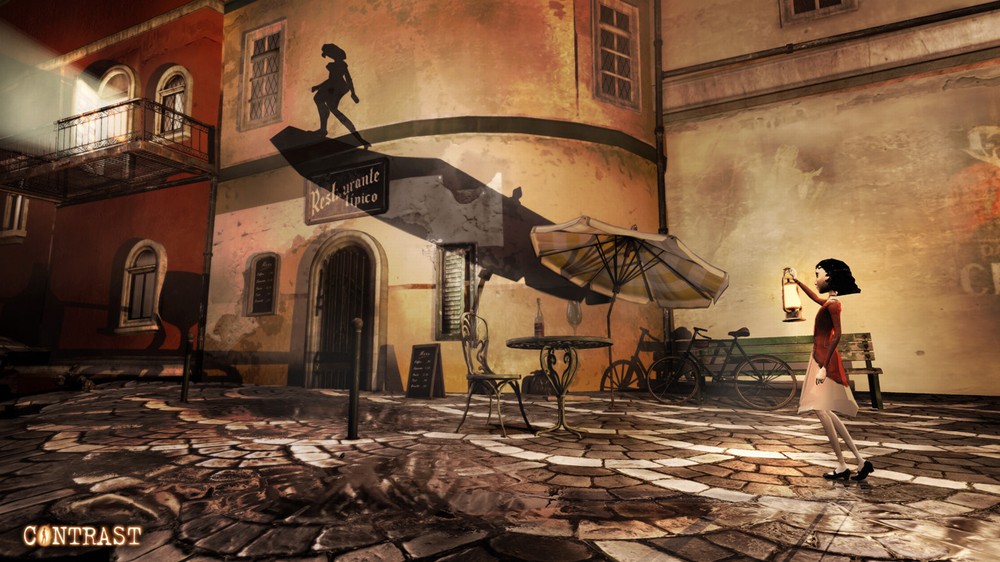 The core of Contrast is a series of puzzles that are entirely based on light and shadows.  The main game is pure 3D but when Dawn is in a well-lit area she can snap to the wall and become a flat shadowy version of herself.  This allows her to traverse a world within a world created from shadow and silhouette.   Dawn and Didi can actually contribute to the creation of this other world by moving light sources and various objects in the physical world to change the size, shape, and position of the shadows being cast.

It’s an entirely original and quite stunning concept once you experience the first two or three puzzles and realize the potential.  With its heavy emphasis on light and shadows I was often reminded of the 1998 PlayStation classic, Heart of Darkness, and in some of its more monochromatic moments, I even had flashbacks to Limbo.  For the most part the puzzles are navigational, and the game throws in some cool moments where you have to quickly shift between shadow and reality to navigate dark patches, because without a light source Dawn will return to the physical world.   There are some cool timing puzzles like jumping across the shadows of patio umbrellas before they snap shut or riding the rising shadow of a hotel elevator as it slides up the wall.  One of the more challenging puzzles involves navigating the circling shadows of carousel horses as they rise and fall on the surrounding buildings.

The vaudevillian characters are few but surprisingly interesting with great voice acting and engaging animations, in a shadow-puppet kind of way.   The dialogue is engaging and I love the various unanswered lines of conversation between Didi and Dawn, and everything those two overhear in their adventures.  Being imaginary and a shadow provides for some great fly-on-the-wall moments, and you even get to star in your own shadow puppet storybook theater when you visit and try to repair a circus.  I was extremely impressed with the music including a lounge singing act early in the game, and you can even get the soundtrack in MP3 format if you buy the collector’s edition on Steam. 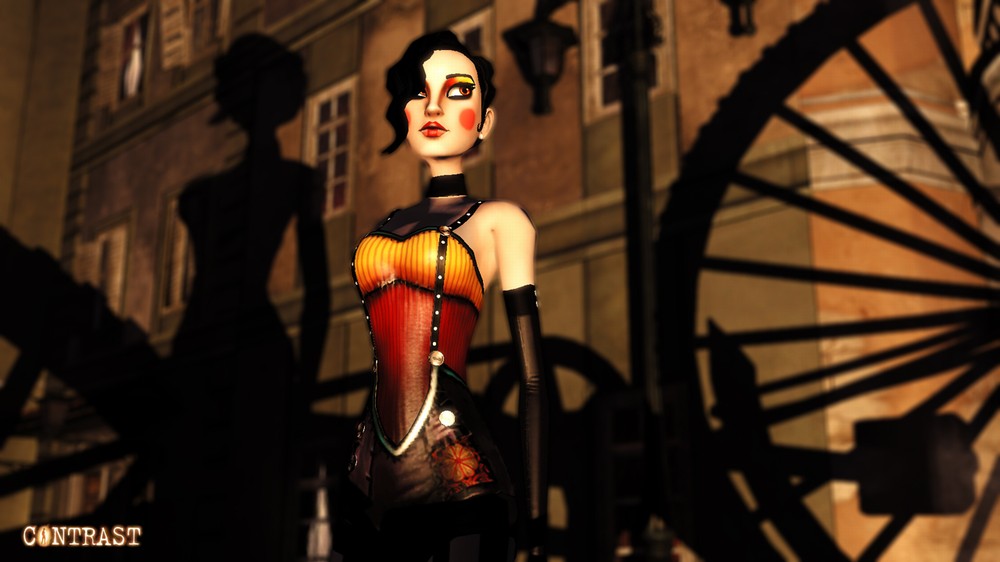 Contrast is available on PC/Steam for $15 as well as the PlayStation 4, and is currently being offered for free for PlayStation Plus subscribers.  I’ve played both versions, and while this is primarily a PC review I will say that the PS4 looks “almost” as good as the PC but suffers from some seriously annoying load times.  It seemed that I was seeing this spinning piece of paper load indicator every 2-3 minutes on the console, whenever you entered a new area, whereas the PC was a nonstop uninterrupted adventure.  There is also a Collector’s Edition for $20 that comes with the Original Soundtrack and a collection of artwork and a developer diary.   The PC version is most definitely better when played with a controller, and if you don’t mind paying for it, the better experience technically speaking.

I was totally captivated and completely hooked after just the first 30 minutes of playing Contrast.  I hadn’t been following the game’s development, so it was a complete and shocking surprise just how original and entertaining Contrast is from start to finish.  I was a bit disappointed that the game does end so abruptly and so quickly.  It’s only a 3-4 hour experience and leaves you with so many unanswered questions, but it is still an experience that is more about the journey than the destination, and one that everyone should share, and if you have a PS4 it’s free, so you have no excuse. 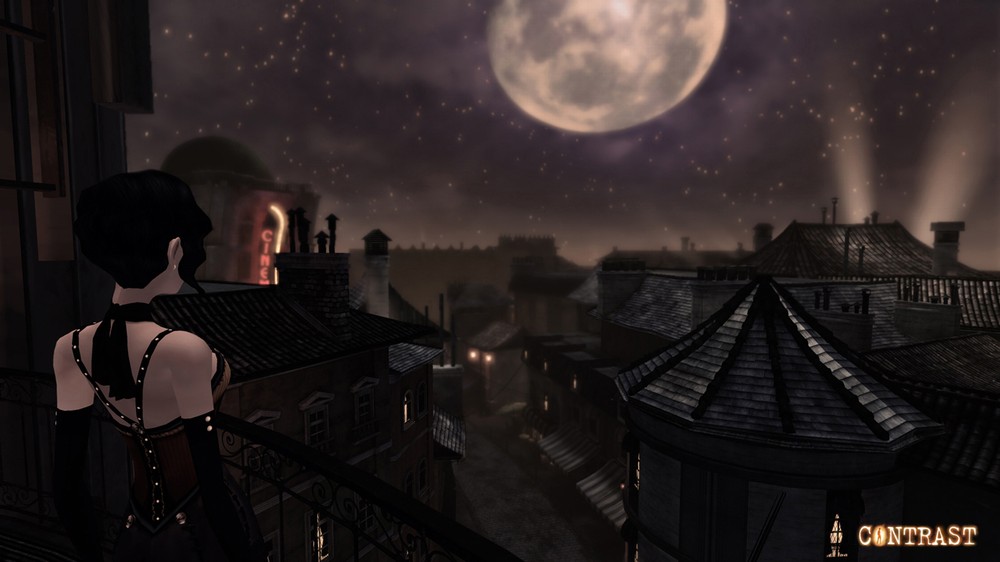 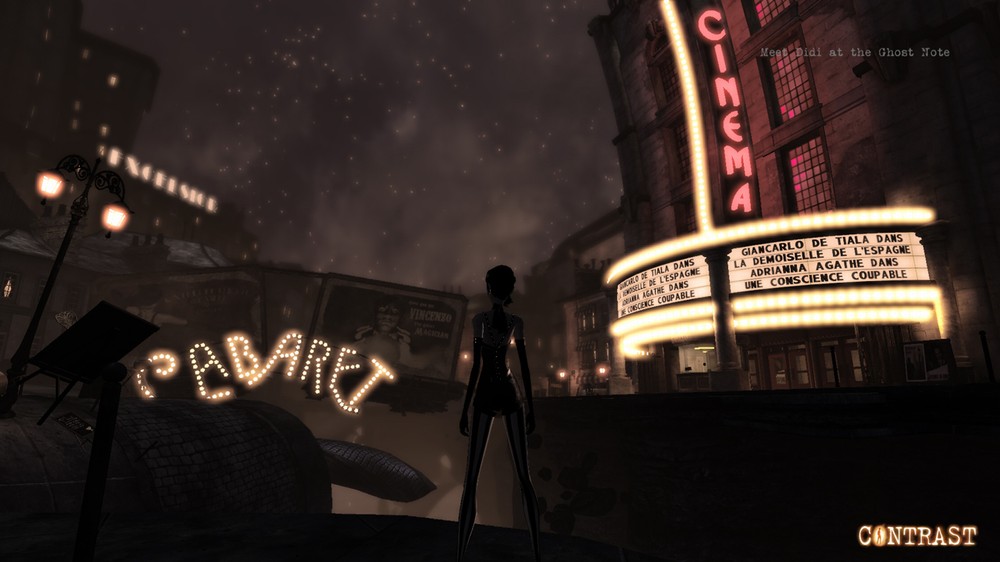 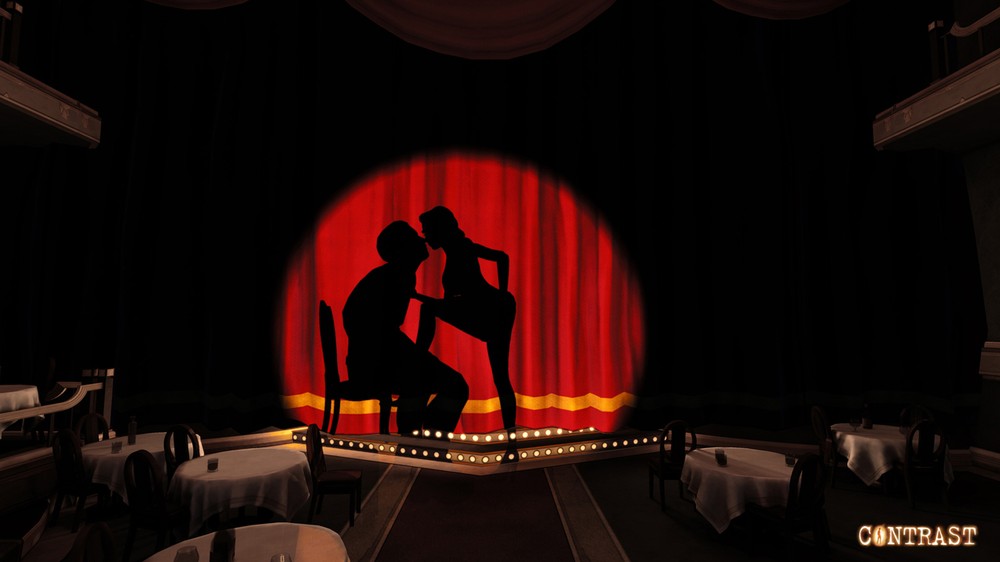 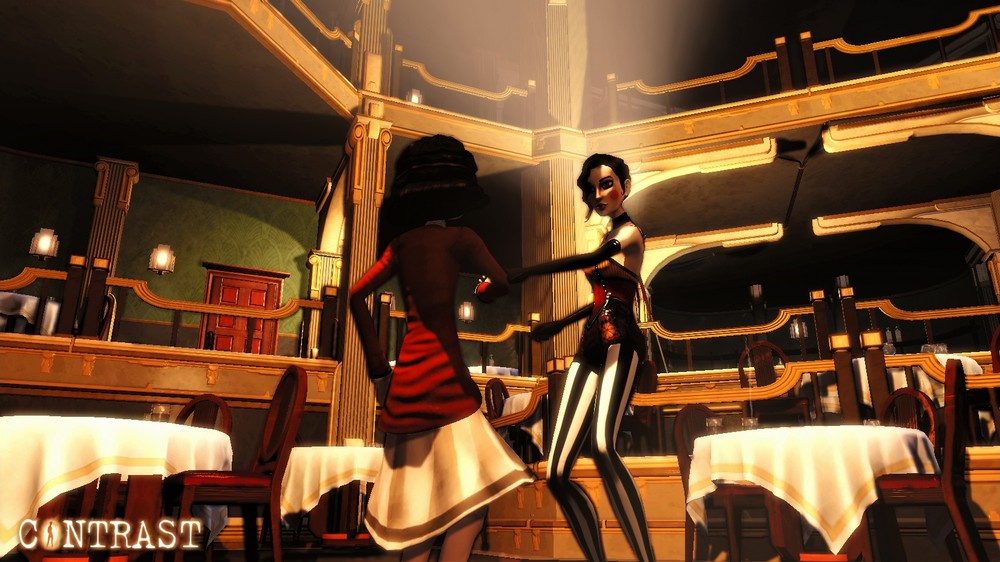 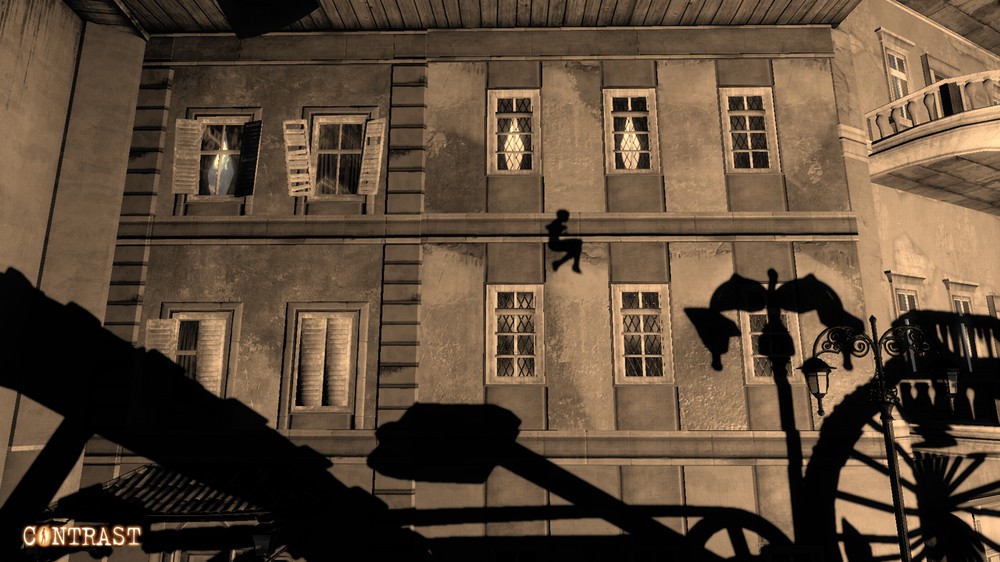 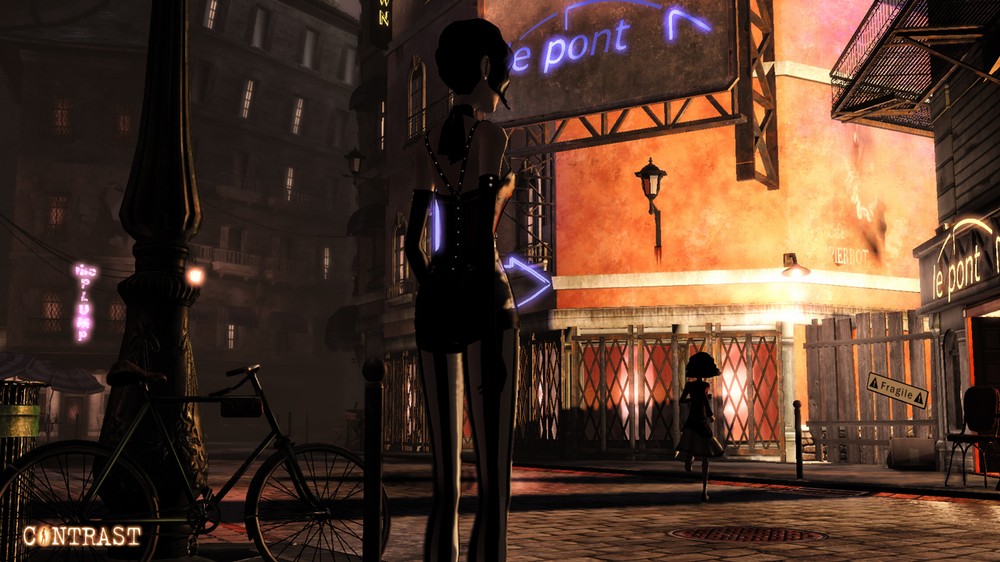 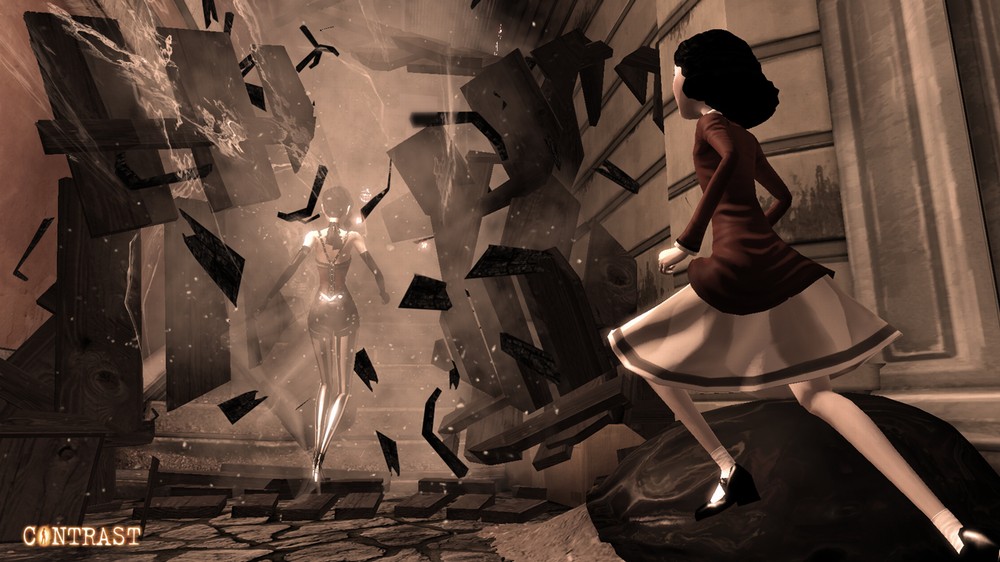 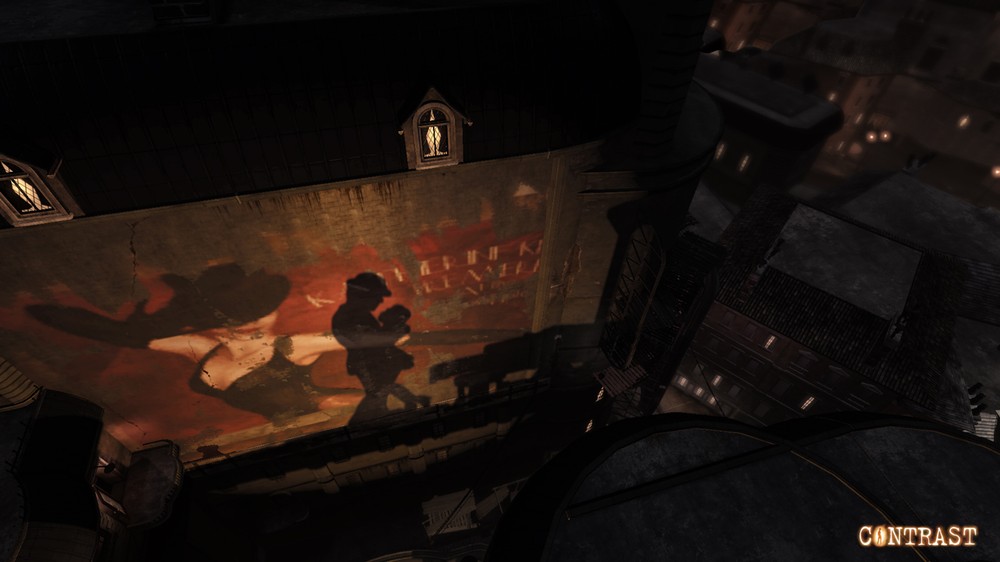 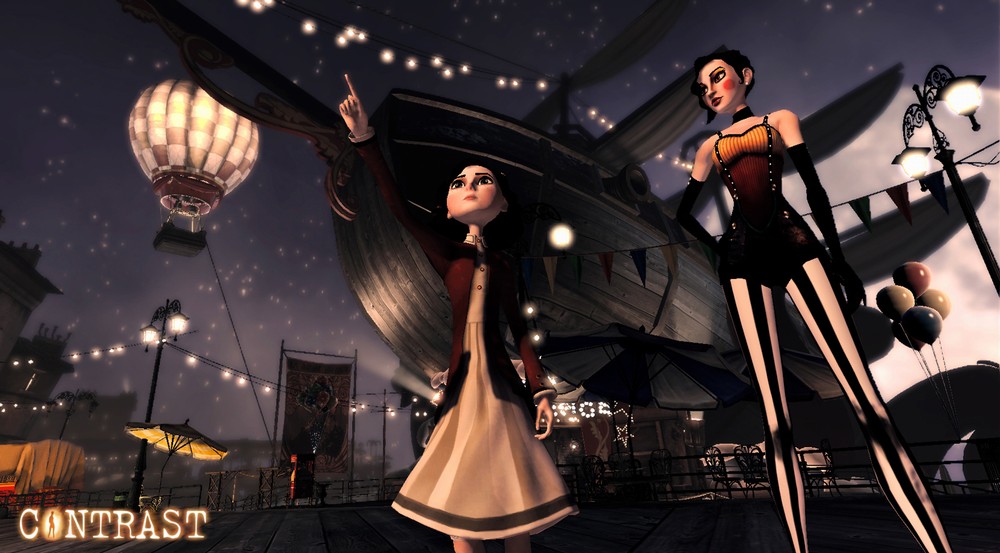 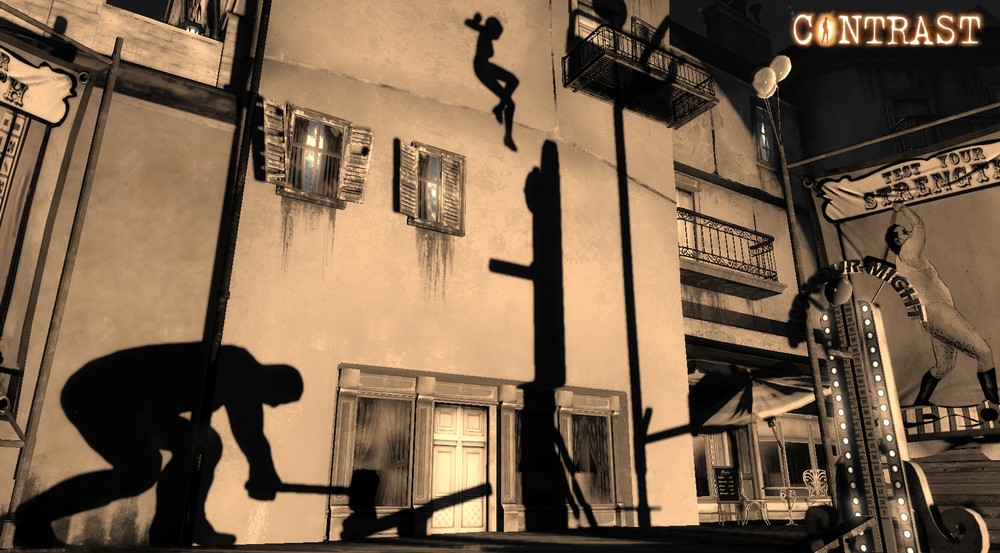 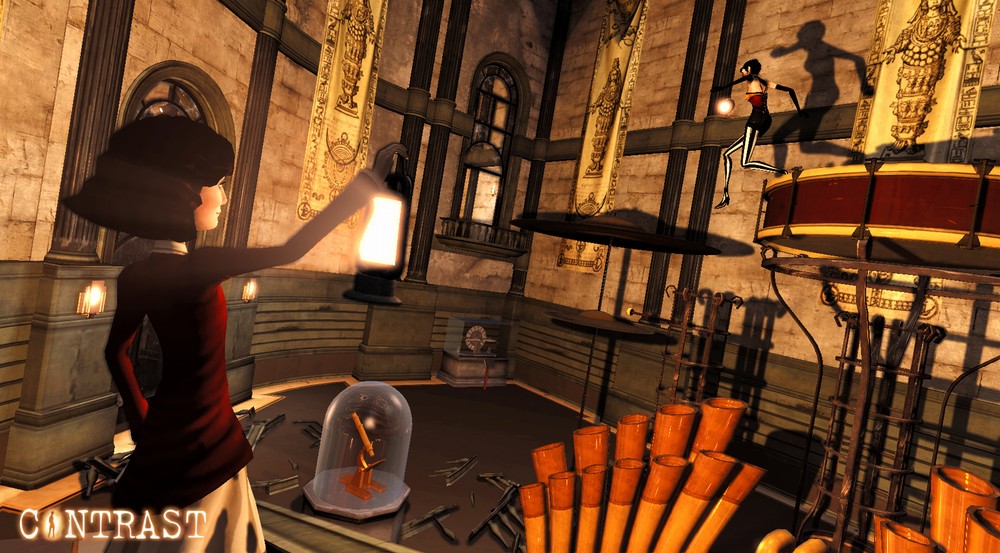 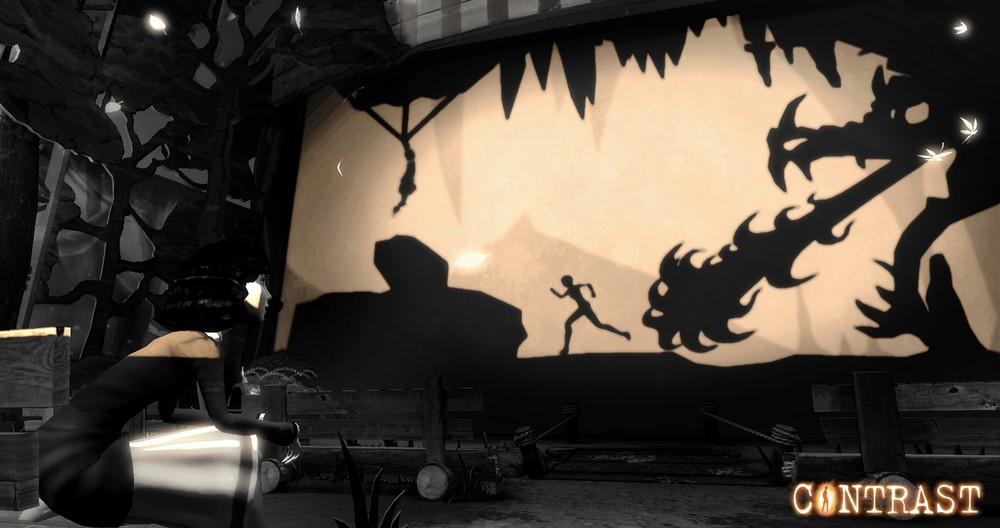 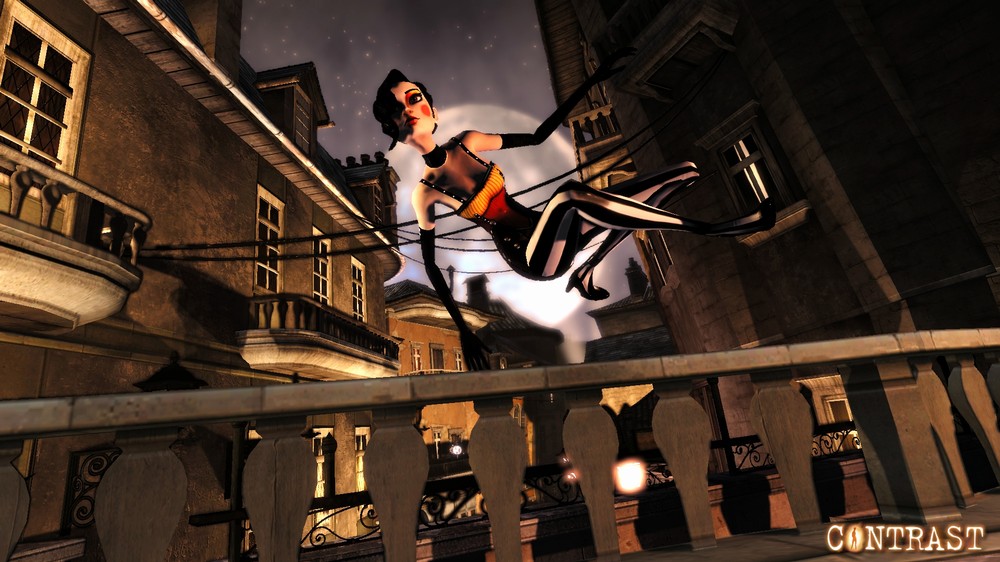 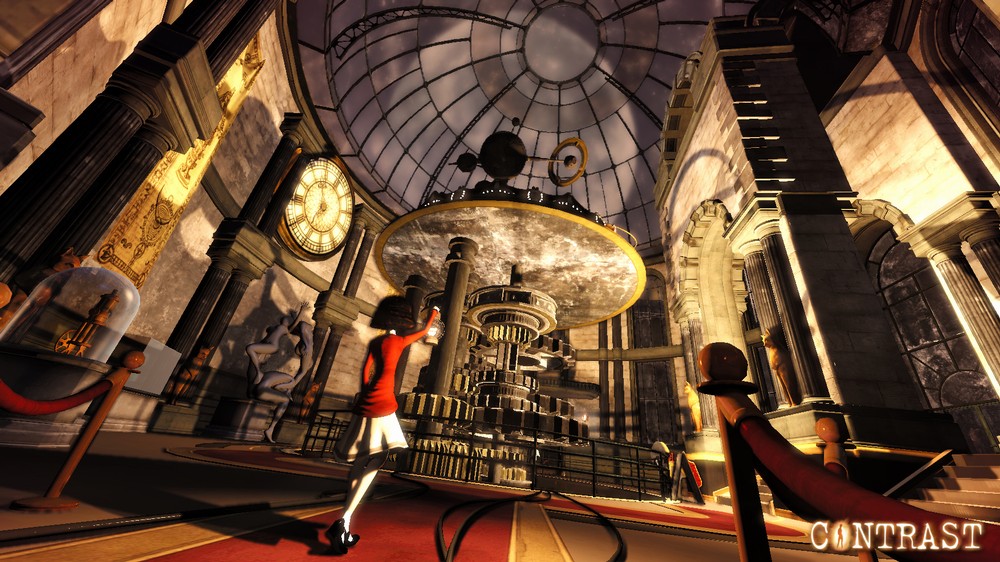 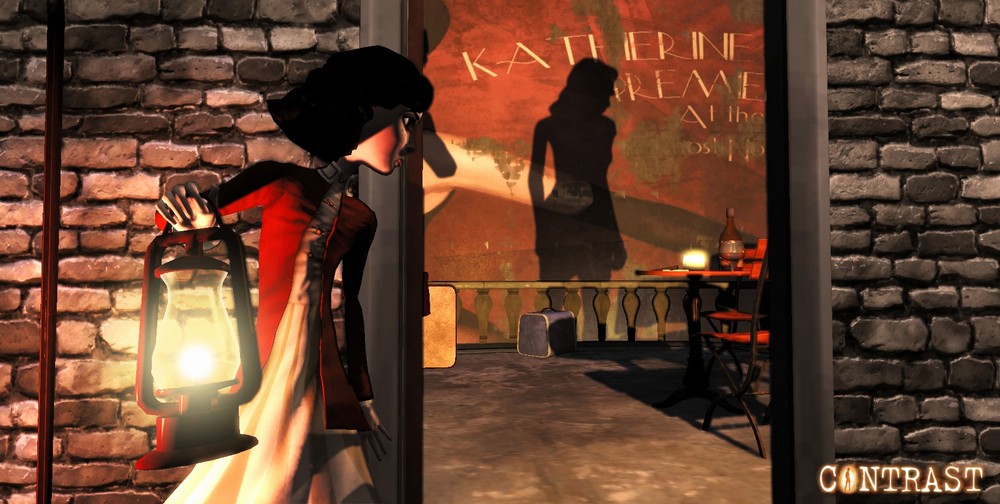