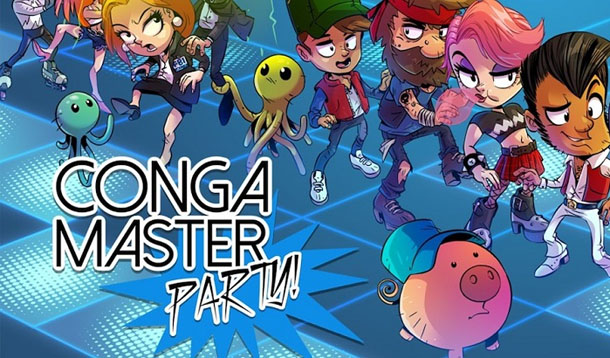 - No story
- Repetitive
- Characters can all be unlocked using Amiibo thus making the game that much easier.

Shines when you can get two or three people together for the party modes.

Since the purchase of my Nintendo Switch I’ve played two games on it, Breath of the Wild and Mario Kart, so when I had the chance to play something different I thought “why not?” Was I in for a treat with Conga Master Party, or was it a trick? Developed by Undercoders and published by Rising Star Games, Conga Mastery Party takes Conga to the next level with four player co-op and competitive modes. If you’ve ever wanted to shake your tail feather whilst leading a conga line around the dance hall then jumping over pigs on your way to the next conga party while avoiding aliens, look no further because this will make your dreams come true. I’m not even kidding.

The game starts off easily enough. You start with one character and can unlock 12 others who have the enhanced stats necessary to reach Conga Master Level. If you don’t want to actually play the game to unlock those advanced characters Conga Master Party has Amiibo support which will unlock a costume and the appropriate character for you very early in the game to get a head start. 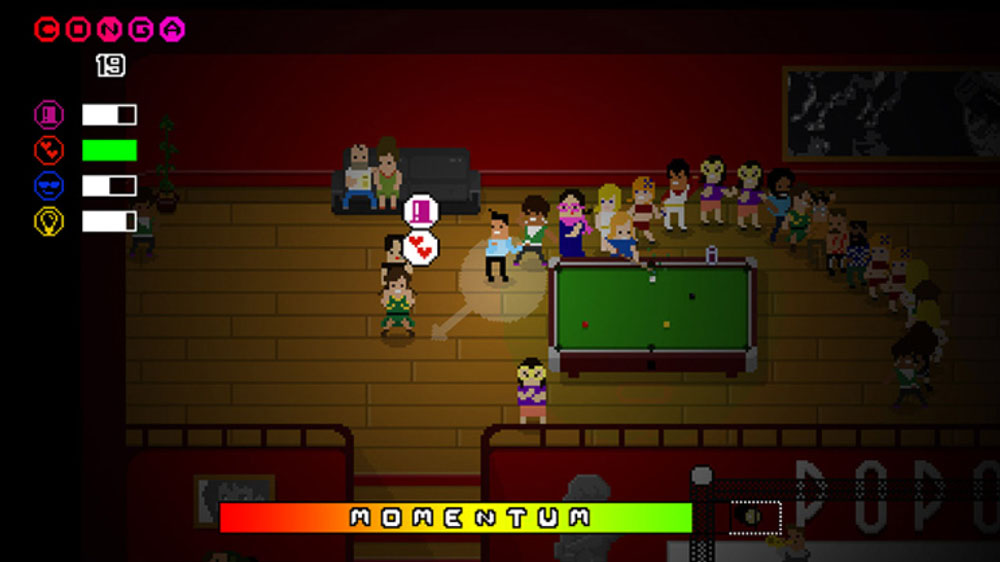 Regardless of the character, the goals and controls are quite simple. You play with the shoulder buttons on the switch controllers to move left or right, and while you may think you need to keep a rhythm like most dance and music games you can Conga as you see fit. Each “level” is a different nightclub which can appear as traditional venues or an old style soda shop. Regardless of the location the music is bumping and so are your hips because there’s a new conga line to form and new challenges to overcome.

Building your conga line is similar to the old Snake game from the flip phone era where you had to find the little dot, eat it and grow bigger, and that’s pretty much what you need to do in Conga Master Party as well; albeit first you have to entice each dance hall visit with your booty shakes and need to fill up a meter that appears above their head until they just can’t stand to be left out of the conga line and jump in. I mentioned challenges earlier and if Conga Master Party led you to believe all you needed was to make a big line to win the level you have another thing coming because not only do you need to increase the size of your line, you need to make sure you are picking up the appropriate people for your line. 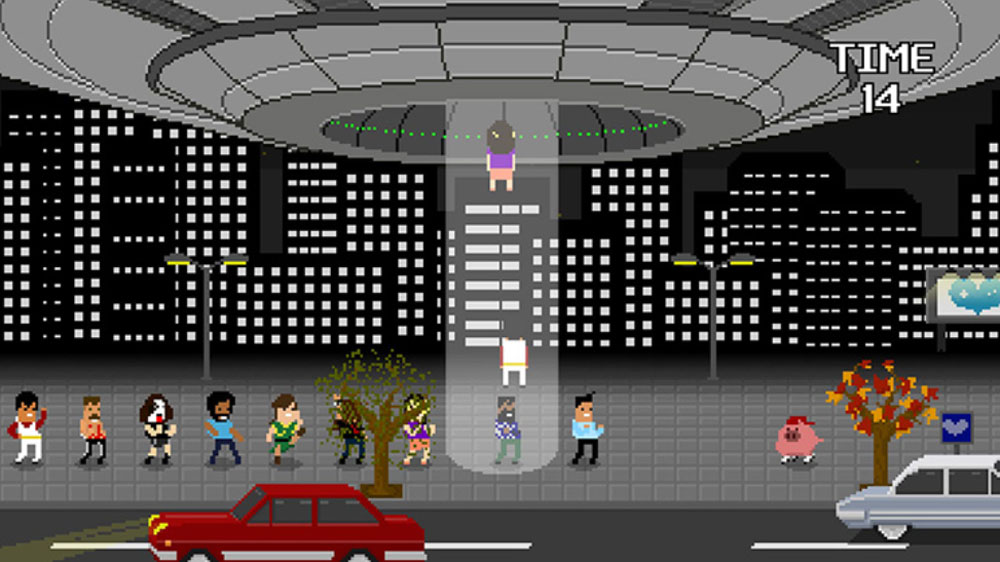 Each dancer in the venues have one of four characteristics and you need to collect enough of each to fill up the four independent bars as well as maintain your momentum bar by adding other party goers in the halls and in some cases having to avoid angry bouncers or servers spilling water in your way to slip you up, and that’s just the single player game. Before we move on to multiplayer I mentioned Pigs and Aliens earlier and I wasn’t lying. To move on from each level after completion you play a mini-game consisting of you having to jump over random pigs in the street and smashing the run button as fast as possible because an alien ship is sucking up the conga line you just left with from the previous location. Reason? There isn’t any, because there isn’t a story to it. Deal with it.

I played multiplayer with one other person who was much better at this game than I was while having no experience at any actual gaming. I’m not sure if it was because after two days of playing I was conga’d out or her skills are that much better, but we played games such as “Just Conga” which was akin to “Just Dance” in that one person picked up a power-up that made you strike a pose by tilting the joycon and the other players had to copy it exactly using their controller or risk losing their line. We played Cut the Conga because she thought she would get to control Nom-Nom from cut the room and was disappointed when the goal of the game was to use scissors to cut the other persons conga line to as small size as possible, which can I just say started to get a little bit physical near the end, she obviously won. 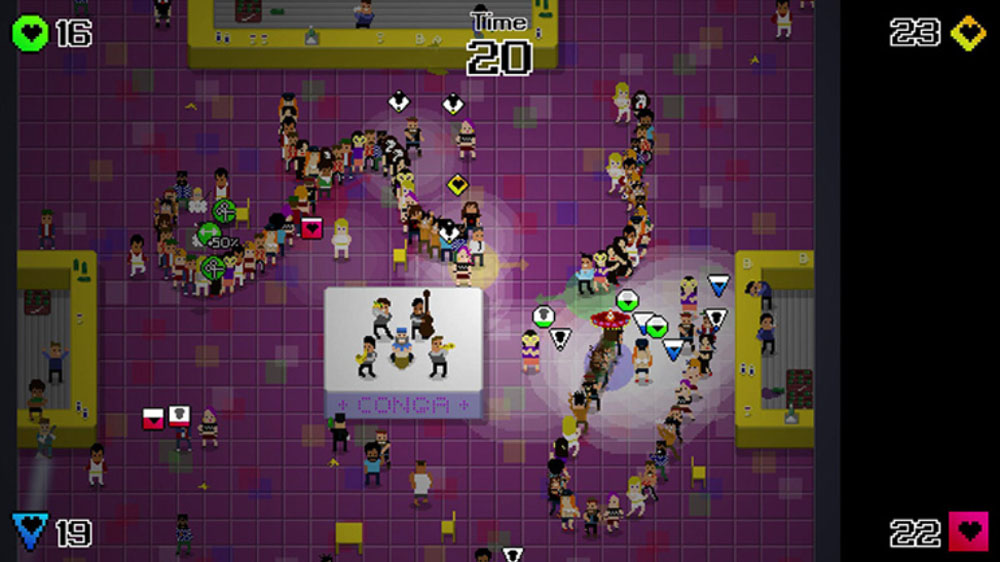 All in all, Conga Master Party is something you’ll pick up and play for a few hours of single-player until you realize it’s repetitive, but the game shines when you can get two or three more people together for the party modes. That’s where the magic happens. Will I play it again? Unlikely. Will my wife and sister make me play with them? Probably and I’ll enjoy it that much more.

1
1139
The Walking Dead: Saints & Sinners Review – Oculus Quest
2
984
Join the Galaxy’s Finest as Star Wars™: Squadrons Soars Into Homes Today
3
984
The Falconeer First-Look Preview – PC
4
984
Metamorphosis is 33% Off on Steam!
5
984
Werewolf: The Apocalypse – Heart of the Forest launches on October the 13th
6
984
Synth Riders Celebrates Anniversary with a Month Full of Treats and an Oculus Ques...
7
984
Worm Jazz Review – PC
8
983
Frictional Games Shows Off First Gameplay Footage of Amnesia: Rebirth
9
983
Take to the Skies and Choose a Side in the New Trailer for Next Generation Air Com...
10
983
CRASH BANDICOOT 4: IT’S ABOUT TIME IS AVAILABLE NOW
All Original Content on Game Chronicles is Copyright (c) 2002-2020
Sinjin Solves Walkthroughs Copyright (c) 1996-2020 by Mark Smith