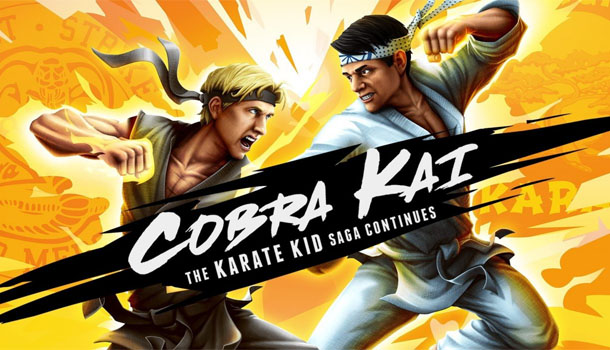 A solid tribute to the Karate Kid franchise despite cheesy story and rough gameplay.

When I was asked if I would like to review Cobra Kai: The Karate Kid Saga Continues, my immediate reaction was “Hell Yeah!”  Having been a kid in the 80’s, there were few movie franchises that appealed to suburban youth more than The Karate Kid.  It was the perfect story of the underdog triumphing over the bullies, and a multi-generational friendship/mentorship in which both parties are filling a void in their lives.

When YouTube Red’s follow up series Cobra Kai was released in 2018 I have to admit that I was skeptical that the story would be able to hold up 34 years later. But on first watch (during a 7-day free trial of YouTube’s service) it became immediately apparent that this series was something special, and way more enjoyable than it should be.  Recently, Cobra Kai moved from YouTube’s premium services, to YouTube’s free services, and now onto Netflix – greatly increasing accessibility to viewers.  If you have not yet watched the series, I highly recommend you check it out. 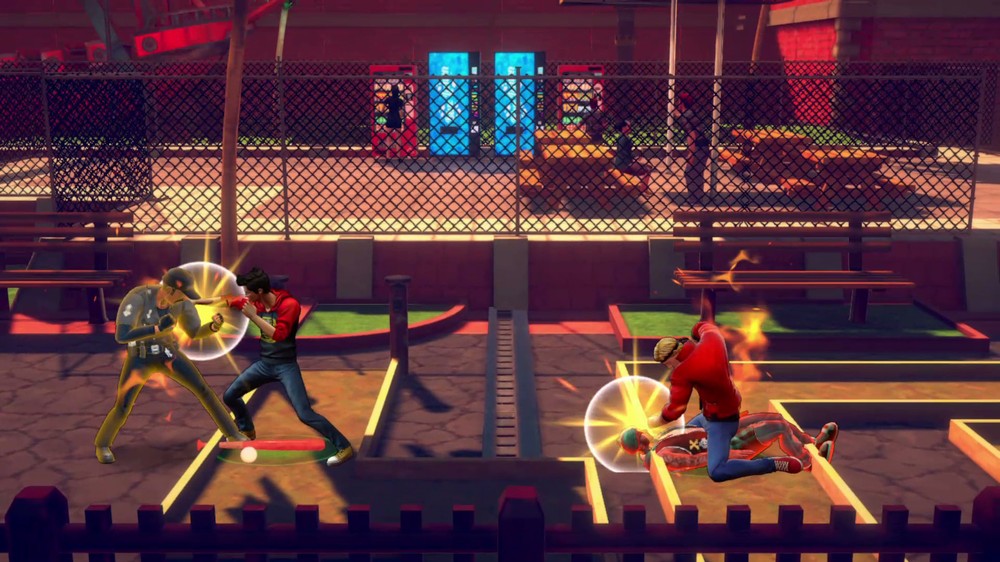 Before I go further, I do have to issue a bit of a disclaimer that for the first 20 minutes playing Cobra Kai, I absolutely hated the game – the visuals were dated, the characters were goofy, the storyline was cheesy, the combat was repetitive, and worst of all the controls were clunky and unmanageable.  Then something happened – something clicked – and suddenly I was hooked on upgrading my characters’ special moves and unleashing a satisfying fury on wave after wave of Cobra Kai baddies.  Before I knew it, it was 2 hours later and my previous complaints had been all but forgotten. 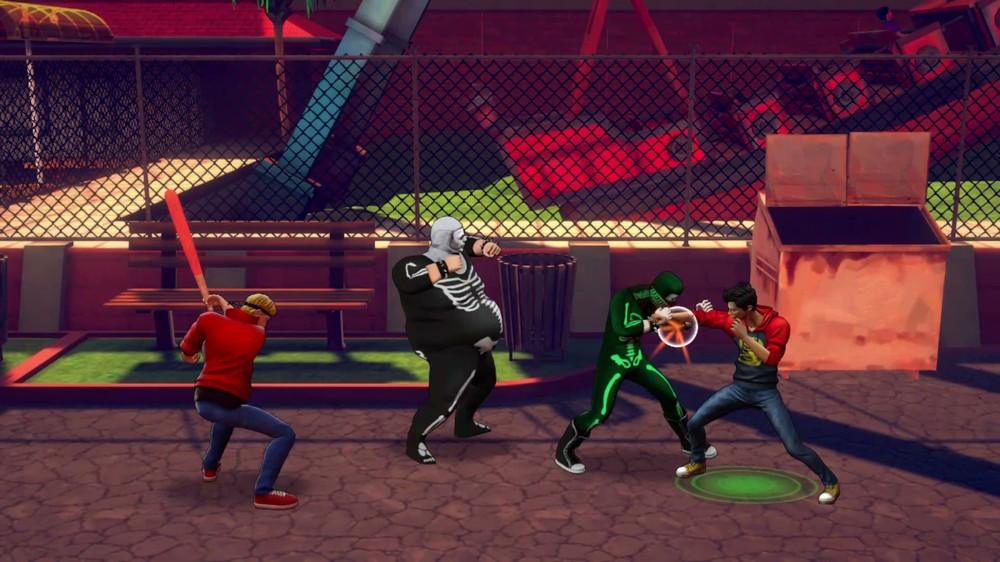 Cobra Kai starts by having the gamer select his or her preferred dojo; Cobra Kai or Miyagi-Do.  This selection will not only determine the characters and move sets available to the gamer, but also the storyline that will be told throughout the gameplay levels.  I typically like playing the good guys in games, so it was a bit difficult to select Cobra Kai when the time came – but differences between the two sides’ gameplay experiences made the change in perspective appreciated.

As mentioned earlier, Cobra Kai’s gameplay is straight out of the 80’s – a 2D side-scrolling martial arts-based brawler with drop-in, drop-out cooperative.  Yes, this formula has been used ad infinitum over the past 30 years – and many times it has been executed far better than it is in Cobra Kai.  But once the gamer gets a handle on the clunky controls and starts becoming at one with the combos and special moves, all of the rough edges and gameplay repetition become far less noticeable. 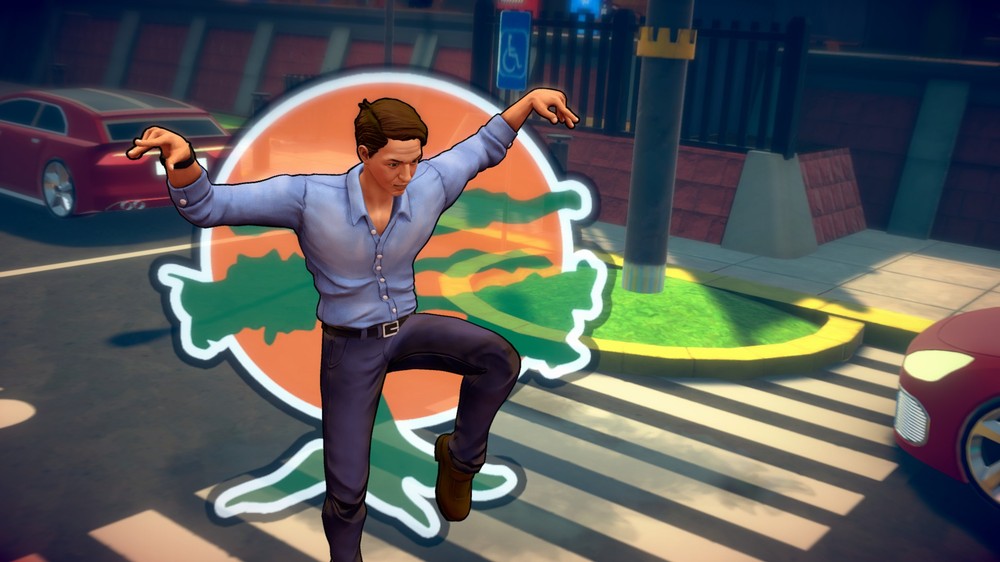 Cobra Kai characters deliver unique fire-based special moves, while Miyagi-Do characters dole out ice-based special moves. Each character comes with a number of pre-assigned special moves but others can be purchased in the character’s home dojo using coins gathered during gameplay.  Almost as satisfying as the special moves, is the ability to interact with the background objects – items like cars, claw machines, garbage cans, and more, can be used by smashing opponents into them for unique environmental finishing moves.

The production is surprisingly solid – while a majority of the between-level and mid-level storyline scenes feature rudimentary comic-book styled still-frame video, the fact that the voiceovers are delivered by Cobra Kai (and The Karate Kid) franchise actors Ralph Macchio (Daniel) and William Zabka (Johnny) adds a bit of authenticity that is often lost in these film-to-game franchise transitions.  The 80’s era musical soundtrack was commissioned exclusively for the game, and serves to puts the final touches onto this apt homage to the wonderful cultural experience that was the 1980’s. 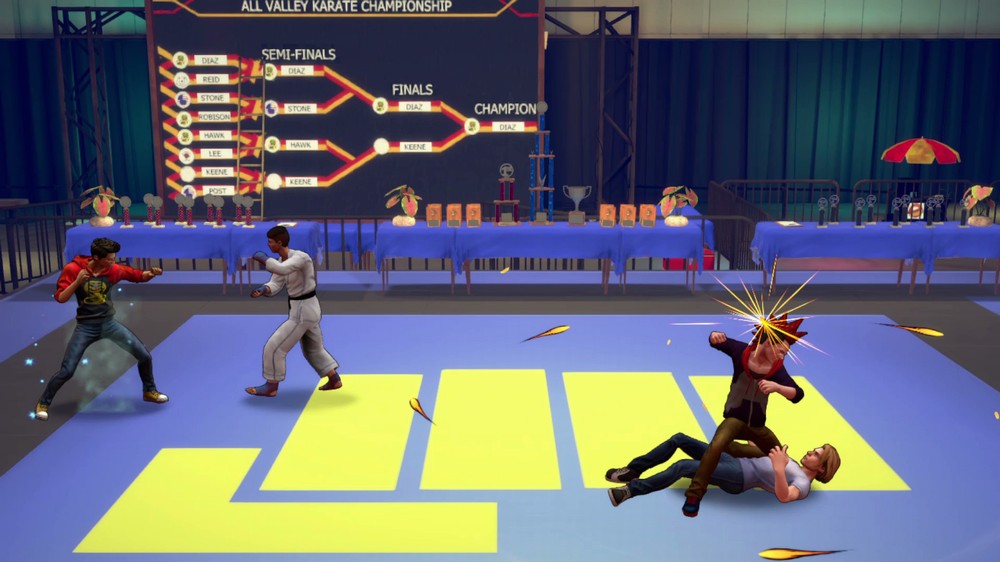 Cobra Kai: The Karate Kid Saga Continues features a total of 28 gameplay levels in total, each taking 5 – 10 minutes to complete.  Given that and the fact that all 28 levels can be played with drop-in, drop-out couch-co-op play, and from two different gameplay perspectives, Cobra Kai offers a ton of replay value.    Sadly, Cobra Kai no online play, so lone gamers will have to swap characters in and out on their own.