Great art and amazing music. Some of the puzzles are quite challenging.

Game is short and a bit repetitive once you realize the limits of the design. A few glitches and lack of checkpoints can be annoying

Loaded with great concepts, Chronology feels unfinished and lacks the polish to make it stand out in a sea of competition.

Toss Chronology onto the growing pile of indie PC games threatening to dominate the Steam marketplace this year.  As cynical as that may sound, when you have too many games of the same basic concept, design or genre it quickly becomes a buyers’ market and those buyers are going to be voting with their wallet so you really need to make your game stand out from the rest.   Sadly, despite all its charm, Chronology never really managed to grab me or keep me interested much past the time it took to review it.

Set in a gothic, almost Steampunk like world, you play an old inventor who, along with his sidekick partner, a giant snail, use their special powers to travel back and forth between past and present, or as they game puts it, Before and After.  You even have the power to suspend time.  While this may all sound cool at a conceptual level it’s nothing that hasn’t been done before – perhaps not with as much artistic vision as this, but it’s nothing original.  I was reminded of past games like Giana Sisters, Braid, and more recently, Super Time Force, and the entire time I was playing Chronology I just couldn’t help thinking I was playing a game that would be better received on an iPad. 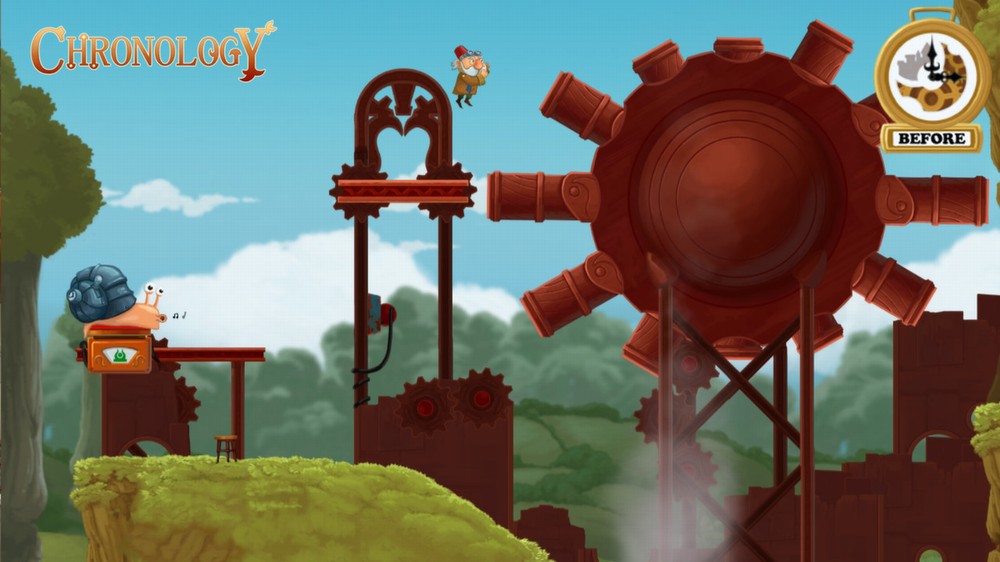 Chronology is a mix of platforming and puzzle-solving where you can toggle between past and present to alter the landscape to aid in your navigation of the sidescrolling levels as well as solve some rudimentary puzzles.   Metal construction may be climbable in the past while that same structured has rusted away in the present.  Items in your possession are immune to time shifting so you can take a sapling from the present, take it to the past, plant it, then return to the present to find a fully grown tree waiting to be climbed.   You buddy the snail offers a convenient way to reach tricky locations by providing some additional height for jumping or maybe a temporary ledge for dropping down to lower sections of the level.  The snail sticks to the landscape and is able to go vertical or even inverted in places plus he has the power to freeze time, creating some interesting solutions to more than a few puzzles.

The presentation is solid with great art inspired by Hayao Miyazaki.  While it won’t push the boundaries of your computer it will spark the limits of your imagination with some truly imaginative level design and charming character art.  The soundtrack is perhaps the strongest element of Chronology, created by Niels Höjgaard Sörensen aka Stöj Snak and worthy of listening to outside of the game.  The rest of the sound design is best described as minimalist with interesting sound effects and witty dialogue in a few places. 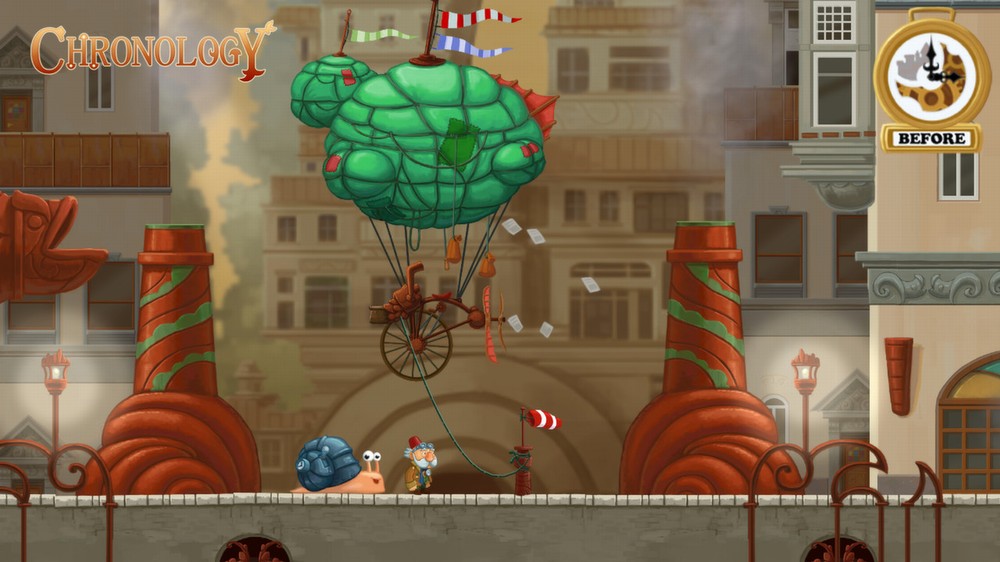 Chronology can be completed by most gamers in 3-4 hours, which is a bit on the short side but then again, the game is only $10.  Some of the puzzles may seem daunting at first until you realize that you only have so many tools at your disposal and that you are either going to be going forward or back in time or maybe freezing time to get past something.  Given the limits of the variables it was interesting to see the designers continually milk the formula to create imaginative brain teasers like having to time shift in the middle of a jump to land on a ledge that didn’t exist…yet.

A few technical glitches also reared their ugly head in my initial playthrough, some of which crashed the game entirely while others simply made me restart a chapter since there is no checkpoint system in place – a remarkably bad idea in a game that otherwise shines at time with brilliant genius.  Sadly, those moments of genius can be counted on one hand – those were the times where I was actually challenged and forced to think outside the box to solve a puzzle.   But these moments are rare and for the most part the game’s time-shift concept becomes formulaic and even a bit boring by the end of your 3-4 hour adventure.

I’m not going to tell you not to buy Chronology, but I might tell you to wait for a sale or a Humble Bundle.  There are some really great ideas here and there is no denying the simplistic charm of the art, animation, and sound (especially the music), but in a marketplace that is bursting at the seams with indie awesomeness, Chronology seems to be trapped in the past. 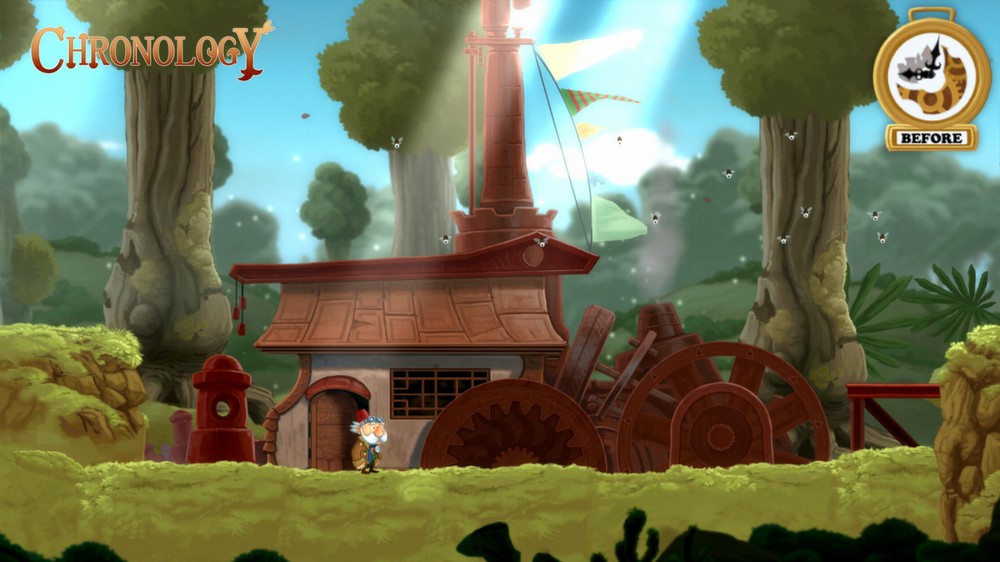 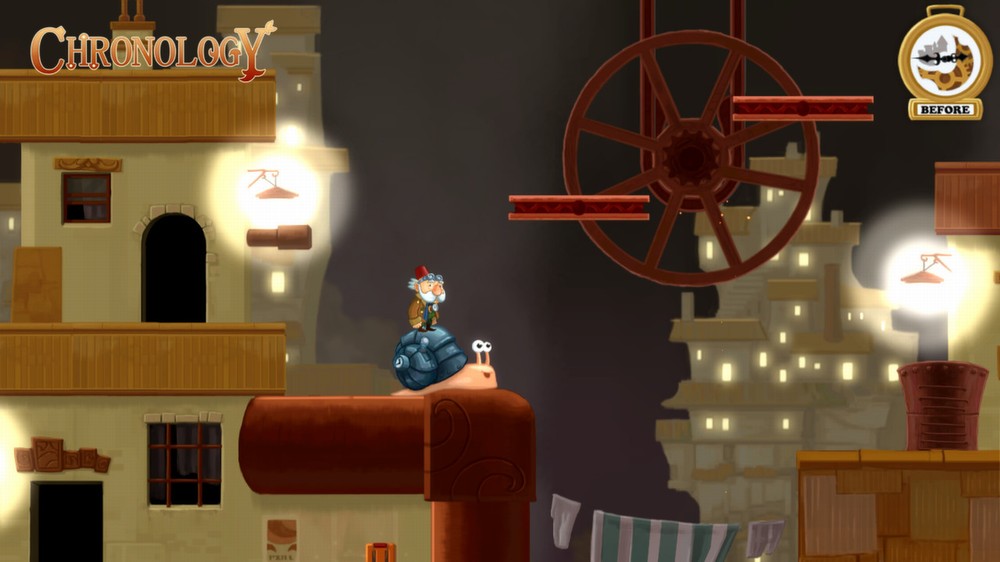 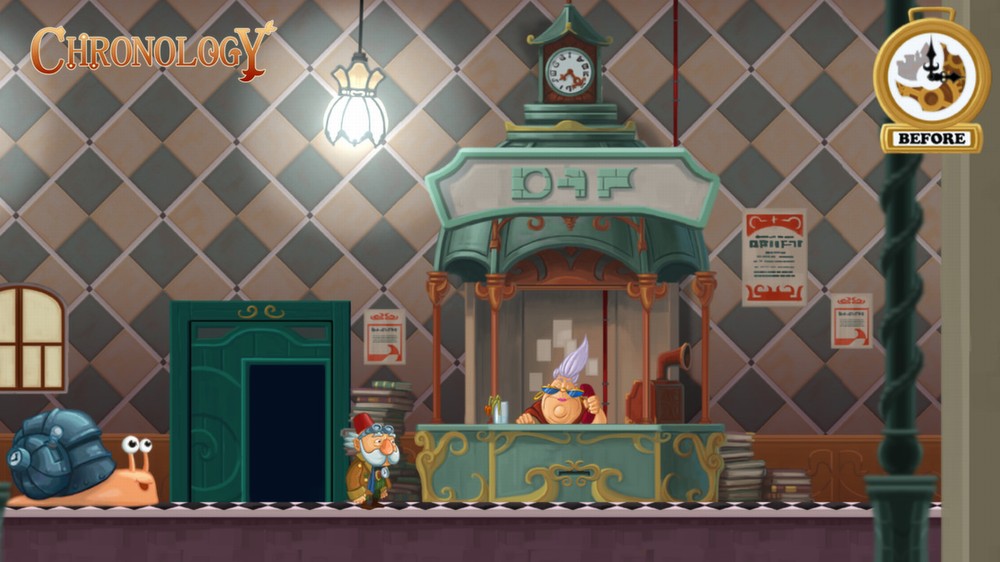 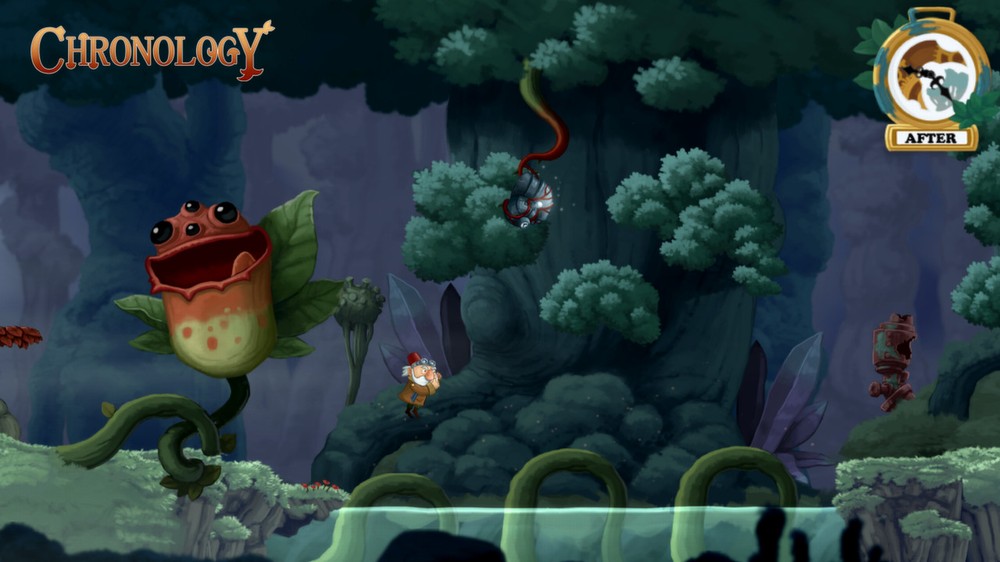