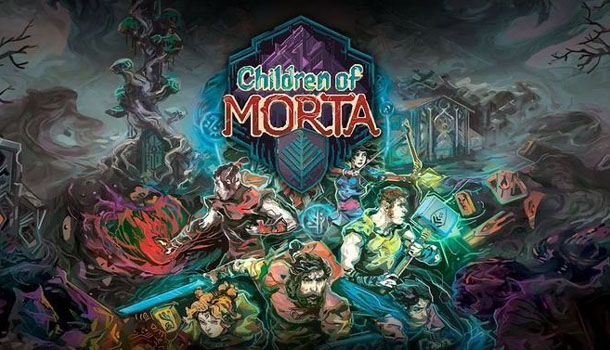 One of the best pixel-art RPG games of the year.

On paper, Children of Morta is a game I should not like. I’m not the biggest fan of RPG’s, a really don’t care for roguelites, and I simply detest pixel-art games, yet somehow, this game that encapsulates all three of these elements, is now one of my favorites games of September.   So let’s explore why. First, all three of my pet peeves are being handled in a unique way that sets Children of Morta apart from any other competing game. The repetitious pattern of dying and replaying procedurally generated levels over and over again until you grind your way to a status and level where you might just survive is rewarded with story progression each time you die. You heard me; you actually move the story forward by dying, which in turn unlocks new characters and upgrades that might make it possible to succeed on your next attempt.

The RPG advancement in the game isn’t just tied to your chosen character; although each character is very unique with their own weapons and skill trees, but you also get perks for the entire family. And finally, most games that rely on pixel art are either using it in a misguided attempt to stir up nostalgia or because they don’t have the skills or desire to create something with contemporary graphics. It was surprisingly easy to look beyond the rough edges in Children of Morta, and it didn’t take long to forget the game was even using this primitive art style thanks to some incredible lighting and slick camera work that borrows the best elements of Diablo and Ori and the Blind Forest. 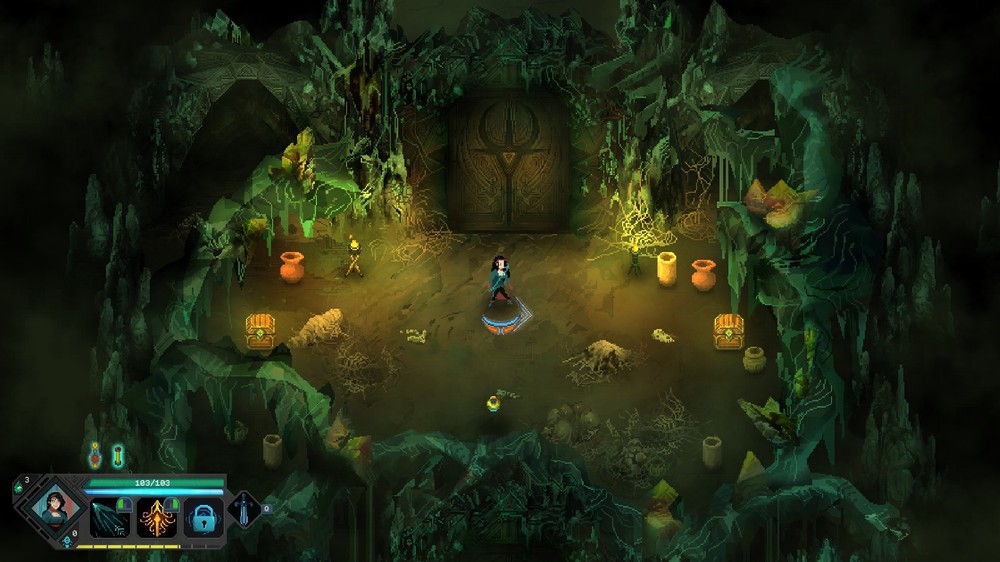 There is a wonderful story being told in Children of Morta, both in the script and the fantastic narration that had me thinking back to Bastion. The storybook narrative unfolds as we learn about the Bergsons, a family of six heroes that you will get to know around the dinner table as well as throughout numerous adventures that take place in expansive outdoor levels and in dark and sinister dungeon levels full of traps and monsters; all randomly created each time you die and revisit, so the game is always fresh and unpredictably deadly. Play as John, the father and protective warrior with a sword and shield or the elder daughter Linda, a precise archer, or Kevin, a quiet fighter equipped with deadly daggers. Then there is Lucy, a lively and bold fire mage, Mark, a mindful martial arts fighter, and finally, Joey who smashes his enemies with a sledgehammer.

The game plays much like any traditional action-RPG where you move around hacking and slashing, or in the case of ranged fighters, playing like a twin-stick shooter. While parts of the game are restricted to solo play, once you enter a dungeon you can share the danger and the loot with a partner in local co-op, allowing two members of the family to team up. After playing alone and later with a friend I can’t see ever playing solo again. It is so easy to die in Children of Morta, but if you are playing co-op you can heal each other and keep the game going much longer than playing alone. You can also coordinate your attacks and various powers to inflict maximum damage and make the most of cooldown timers. 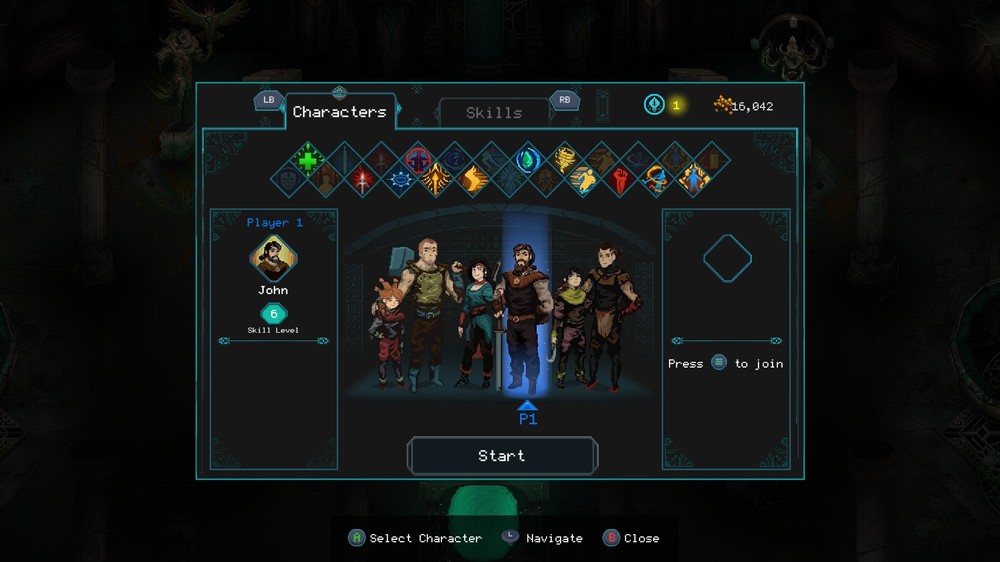 The level of replayability is unprecedented, not only with the randomized levels but also allowing you to pick from any of the unlocked family members, so you can constantly change up your party (of two) to meet any specific challenges. Each of the characters look, play, and genuinely feel different, so it might take a while to find your favorite, or you might just want to keep mixing things up. While some upgrades affect the entire family, each character will level up separately, so it may pay off to stick with one or two and level-up those skill trees to stay competitive.

The levels are full of monsters that will swarm you from all sides, which often turns the game into a session of Gauntlet, as you backpedal around the map trying to whittle down the hordes until they are all dead and you can collect all the loot. There are chests to open and shrines with magical charms that bestow passive and active powers. Occasionally you’ll find healing items but not nearly enough, and I was often running around levels with a fraction of my health bar waiting to get one-hit killed so my partner could heal me. 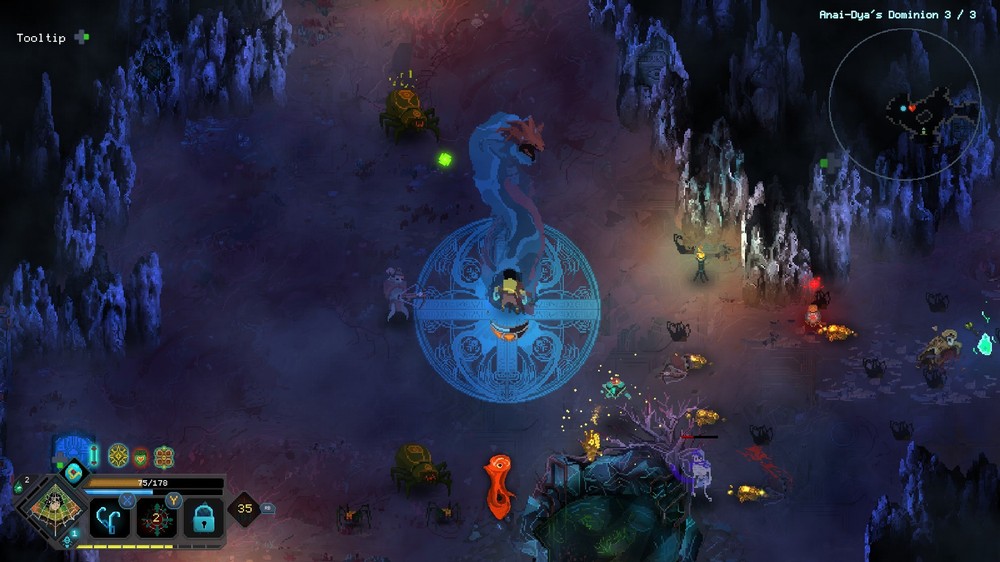 I was impressed with just how much Children of Morta really captured my interest, not only with the intricate family drama that unfolded after each dungeon death, but in the way all these individual stories interwove with each other that actually made you excited to play them. There are some tough decisions ahead when you have multiple characters available, all with exciting skill trees to explore and fancy new attacks.

The flow of gameplay is fairly repetitious with each death taking you back to the house where you can explore any of the unlocked rooms and areas or check in with the family. If you die too much you might run out of story advancement until you finally finish parts of the dungeons. These dungeon maps usually contain 2-4 areas and you can sometimes warp back to a central checkpoint, but if you die (or both of you fall in co-op) you must return to the house and start over. Children of Morta is unabashedly difficult and could easily frustrate gamers who are looking to plow through the game quickly. Rushing through a dungeon will only get you killed that much quicker. 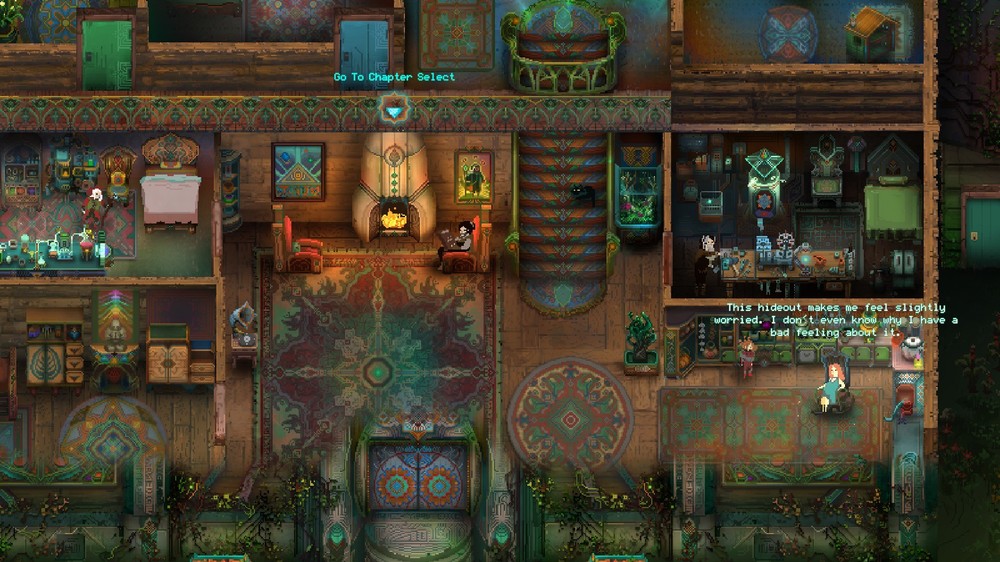 Presentation is flawless with some truly impressive pixel art that made me wonder if it would have been easier to just do conventional graphics. The level of complexity in the outdoor environments, eerily lit caverns and dungeon levels, and the sheer spectacle of the detailed Bergson home with fancy rugs, furniture, paintings, a library, and a fully equipped workshop for upgrades will blow your mind but not your computer. This game slinks by with fluid frame rates at 4K resolution with wonderful special effects and colorful lighting on even a modest system. After a bit you’ll think you’re playing Diablo or Torchlight. The enchanting music and great sound effects all immerse you in the action while the wonderful narration will immerse you in the story.

I’m estimating about 20 hours of content buried in Children of Morta, but how long it takes you to uncover it all is up to you, your co-op partner, if you have one, and your skills in navigating this brutal world and its ever-changing gameplay. Thankfully, the way this game was designed it’s nearly impossible to get bored; it’s different every time. The single best compliment I can give Children of Morta is that I actually had fun from start to finish; something I thought I would never say about a pixel-art, RPG game. And for as much fun as I had playing alone it gets infinitely better when you share the adventure with a friend, so I highly recommend playing co-op if at all possible, especially when they implement the online patch. 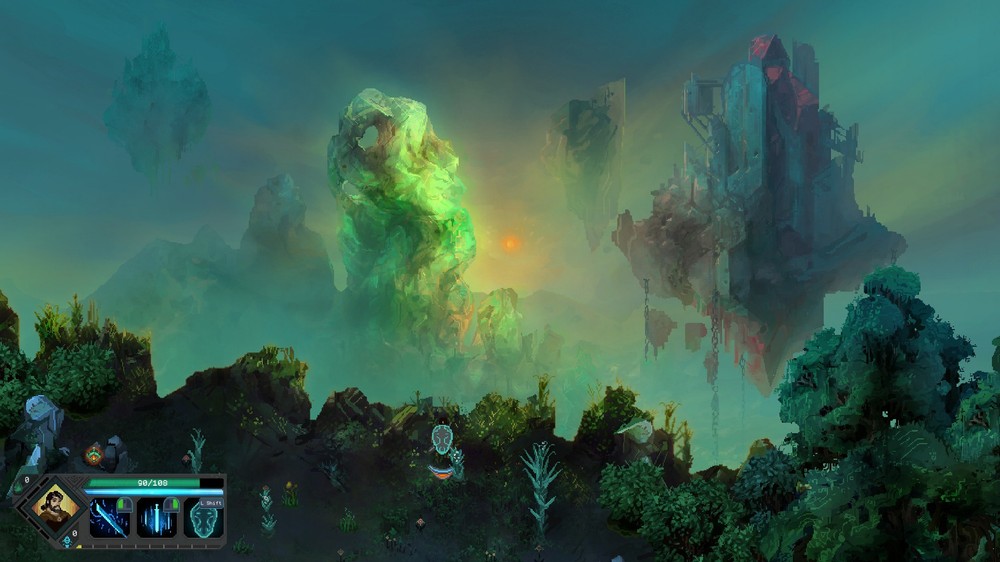 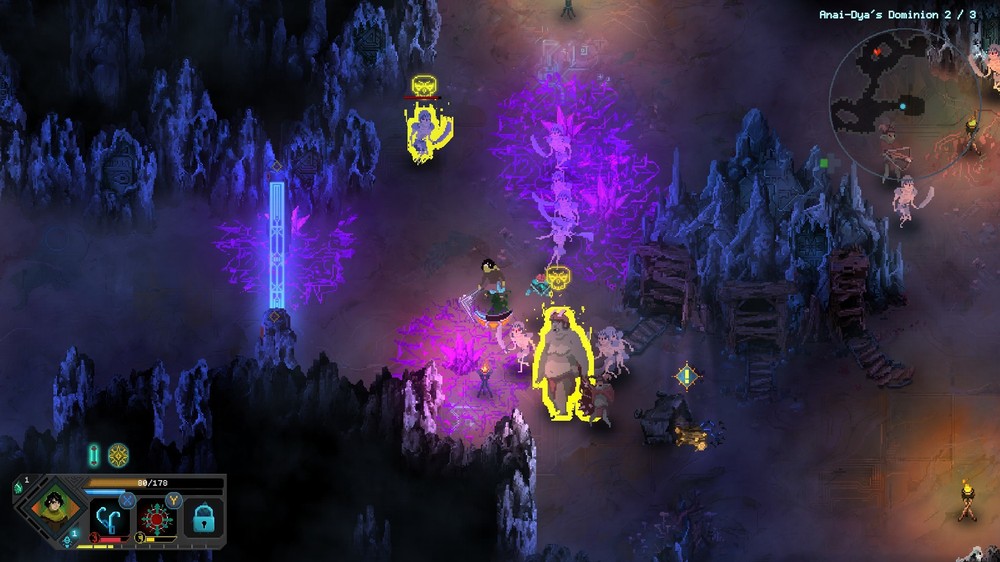 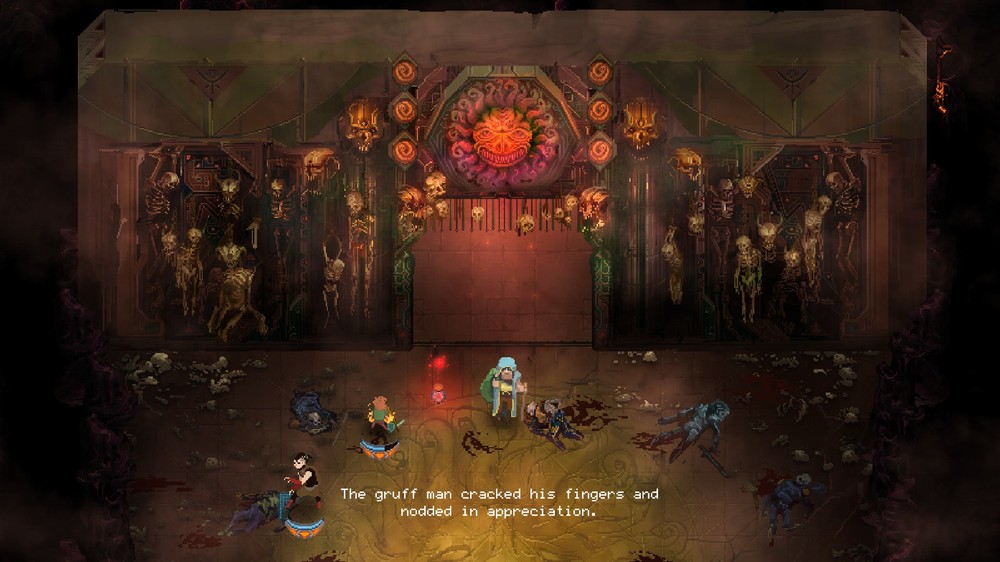 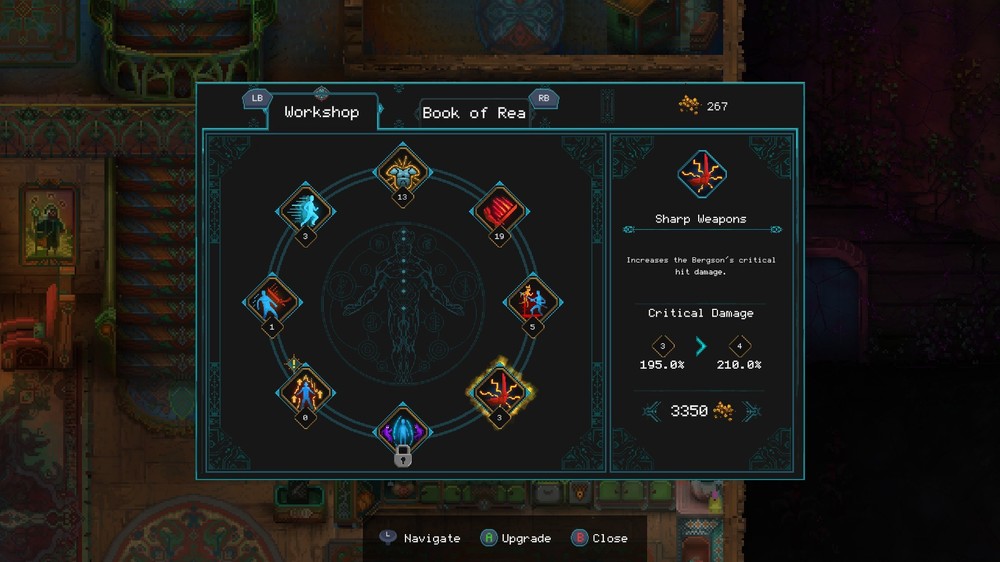 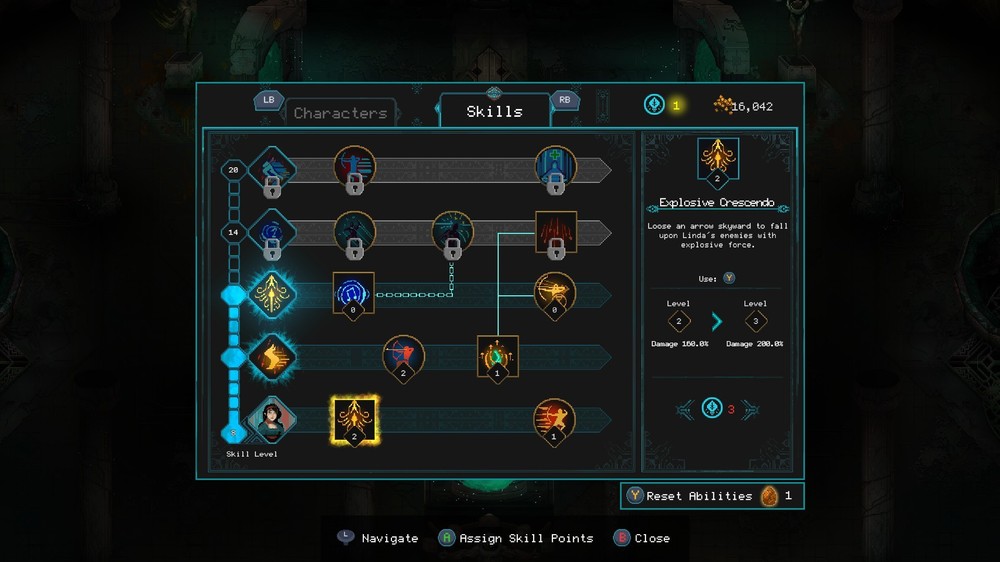 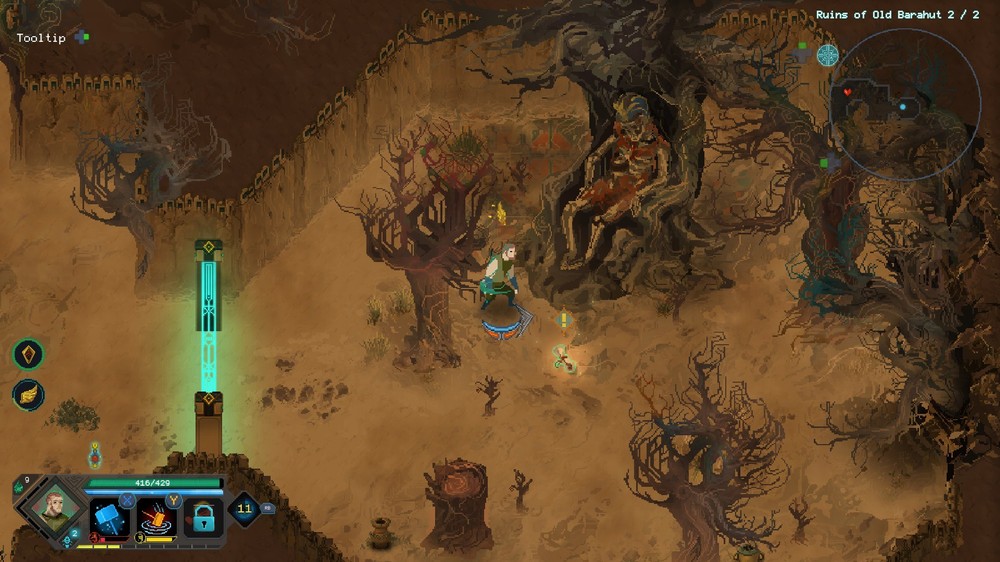 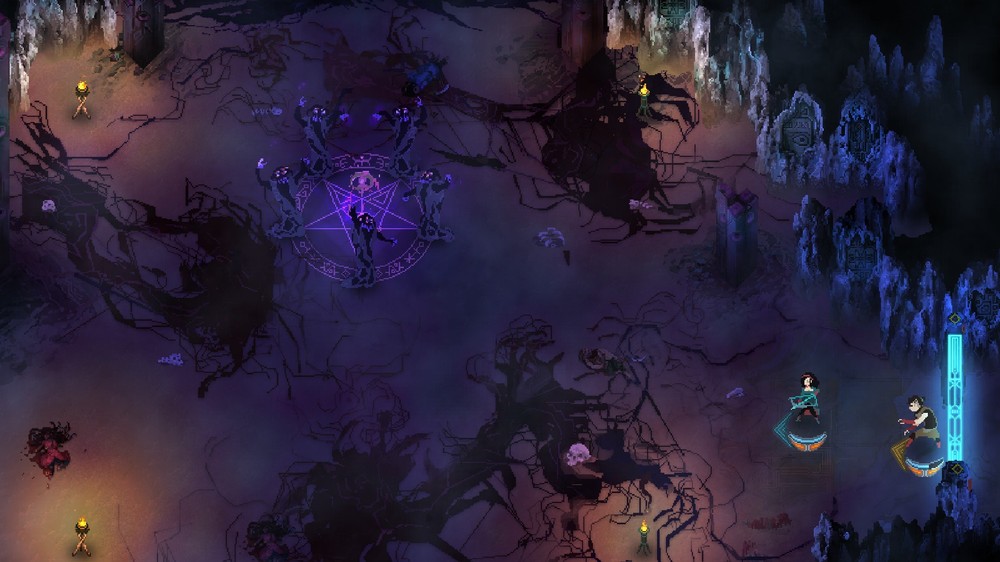