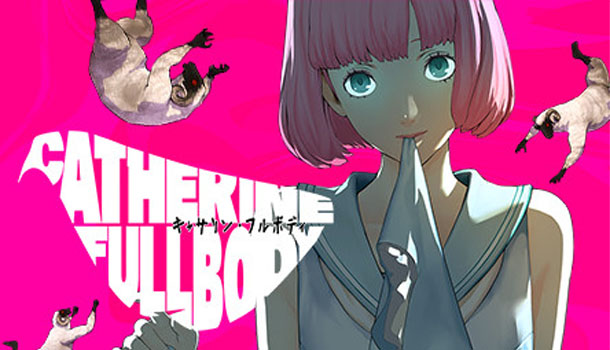 This is the girl you’ve been waiting for, and she’s going to keep you up all night.

It’s been just over eight years since the original Catherine came to console. At that time I reviewed the Xbox 360 version of the game and was amused and engaged with the unique design the blending repetitive puzzle gameplay with a heavily Asian-influenced relationship simulator. Catherine is more than a game; it’s a bizarre psych experiment that will reveal more than you might want to know about your inner self; at least when it comes to relationships and commitments. With that said, you should probably avoid playing this game with your significant other watching over your shoulder or you might have some explaining to do.

Catherine: Full Body is the hot new remaster of that cult classic from 2011, with all new visuals, improved gameplay, brand new music, enhanced multiplayer and even a new character who has been seamlessly woven into the existing story to make things more fun than ever. There is just enough new content that when combined with the eight year lapse in time since I last played, made this game feel like something entirely new. The puzzle count has been doubled to 500+ and there is a new Remix mode that changes up the puzzle play with linked blocks (think Tetris shapes) to turn these brain-teasers into brain-melters. 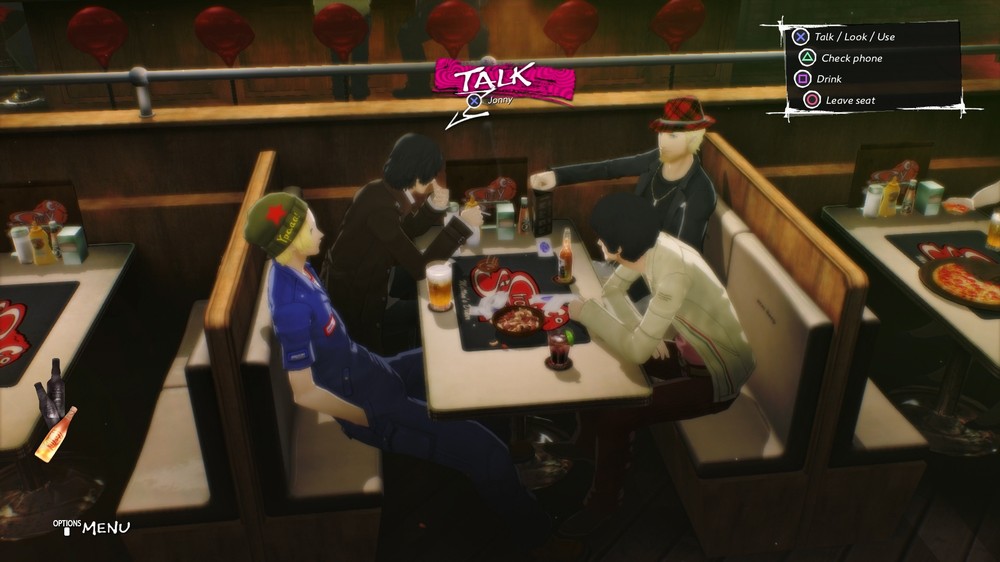 Mixing equal parts of social interaction and conversation (adventure) by day with finger-numbing nightmare puzzles (action) at night, players will control Vincent, a 30-something average guy who is suddenly forced to deal with some serious relationship issues. Vincent has been dating the sexy (and controlling) Katherine for quite some time and she thinks it’s time to get serious. Vincent is perfectly happy with the status quo, which means he gets to keep hanging out with his friends every night, drinking at the Stray Sheep bar. But when the too-good-to-be-true Catherine shows up one night, she and Vincent really hit it off, or at least that’s what she says when he wakes up the next day to find her in his bed. And we can’t forget new girl, Rin, who literally bumps into Vincent in the opening movie then turns up at the bar as the new piano player.

What ensues is a complicated web of deception with Vincent trying to balance multiple relationships; one with Katherine who now says she’s pregnant, and the other with the commitment-free, whimsical booty call that is Catherine. Vincent seeks daily advice from his own relationship-challenged friends; Johnny, Toby, and Orlando, and even their perky waitress, Erica. But how long can he balance two women or three, and how long can he survive a sudden string of nightmares that are killing off all the men in town; a mysterious plague that is seemingly only going after cheaters?

Vincent might visit one or two locations each day but he always ends up at the Stray Sheep. It is here that you explore various conversation threads with your friends as well as several patrons of the pub. This will not only give you valuable insight into the mysterious story, but will also allow you to help out with the problems that these characters are facing. It is here that you can also watch the TV to get news updates, check out your cell phone for text messages (sometimes with sexy pics), play music in the jukebox and even play an arcade game that recreates the nightly puzzle levels in a cute cartoon style – a great way to practice.

The game really kicks into high gear when you finally decide to leave the bar. Hopefully you are drunk since alcohol seems to improve your skills for the impending nightmare. Each night you experience a new dream with its own theme and boss challenge. These nightmares all play out the same, as an increasingly difficult stack of blocks you must climb and navigate to reach the top. Each night has a few stages with a rest spot where you can talk to the other men around town who are also experiencing the same nightmare. The funny thing is, everyone in the dream looks like a sheep; although after a few encounters you will start matching up the sheep characters with their counterparts at the bar. Again, you will need to talk to everyone and encourage them all to help them through their own life challenge. 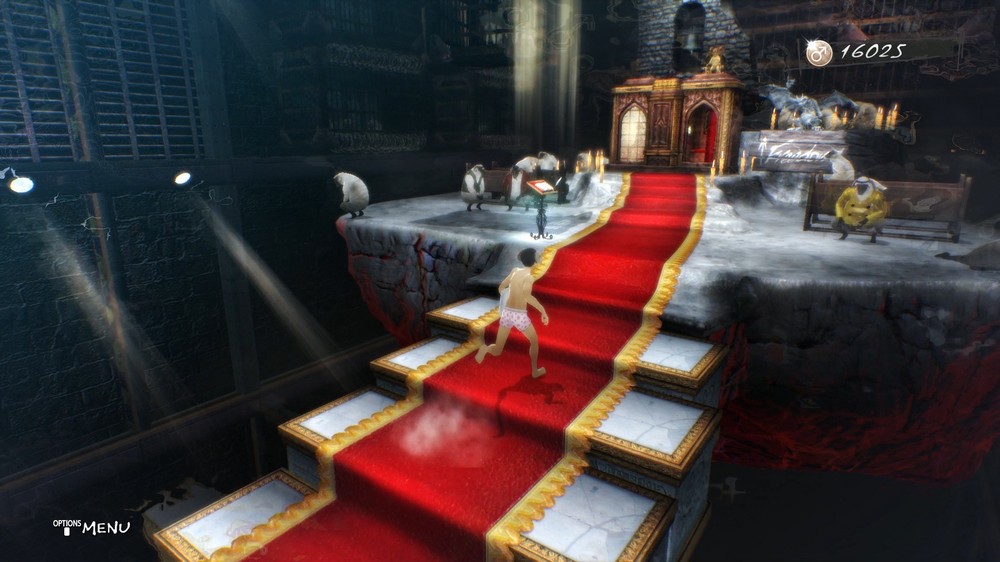 At the end of each resting area there is a confessional booth where you will be asked a morality question. These questions are surprisingly deep and even a bit personal. Questions vary from, “Do you like kids?” to “Would you lie to your girlfriend if you knew you wouldn’t get caught?” or even as random as, “would you marry a robot?” You can either answer these honestly and let the game tell you what kind of person you really are, or you can try to “game” the system to earn any of the eight unique endings in Catherine. The path to each of these endings is complicated and requires consistent answers and morality decisions. I especially enjoyed the feature that compares your answers to everyone else that has played the game if you are connected to PSN, or if you are playing offline, it just compares your answer to a statistical survey of men and women.

In the original game these player stats were pretty much the only online element of the game along with the two-player co-op. You can still play cooperatively but the online tracking has also been enhanced where you will get the nightly death count for every puzzle you play. You’ll also see player tags hovering above the heads of the sheep marching toward the tower of blocks as well as seeing the exact location where everyone died during their attempt. It doesn’t really change the game but it does lend a sense of camaraderie to the experience, even if it’s with strangers. 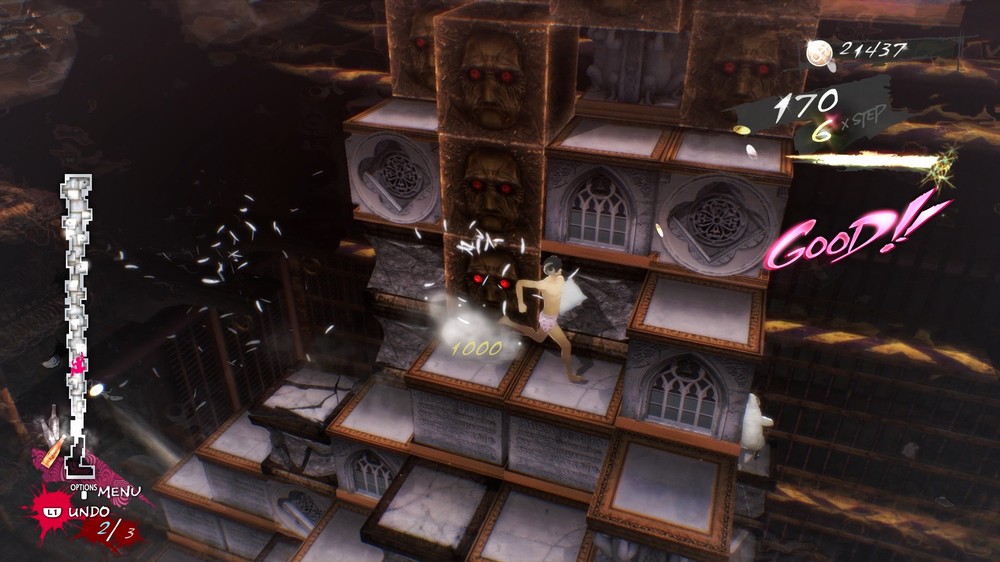 The puzzle levels range from challenging to diabolically evil. Navigating the levels consists of climbing up tiered stacks of blocks. You can push and pull blocks to create steps, ledges, and bridges. You can collect various power-ups to vault two blocks at a time or create a block out of thin air. There are ice blocks that will send you sliding to your doom, spring blocks that will shoot you five blocks high, trap blocks that will spear you, crumbling blocks, immovable blocks, and even a black hole block that will suck you or any other blocks into its vortex.

The game eases you in to the various types of blocks and numerous strategies (or techniques) required for getting through the stages. You can learn and share new techniques with the sheep during those rest periods, and you can be sure you’ll use what you just learned almost immediately. In later levels you will encounter sheep that will also be trying to reach the top. You’ll need to shove them aside or remove blocks out from under them to get past them, or use the Remove Enemies power-up to smart-bomb the screen clean. Get them before they get you. 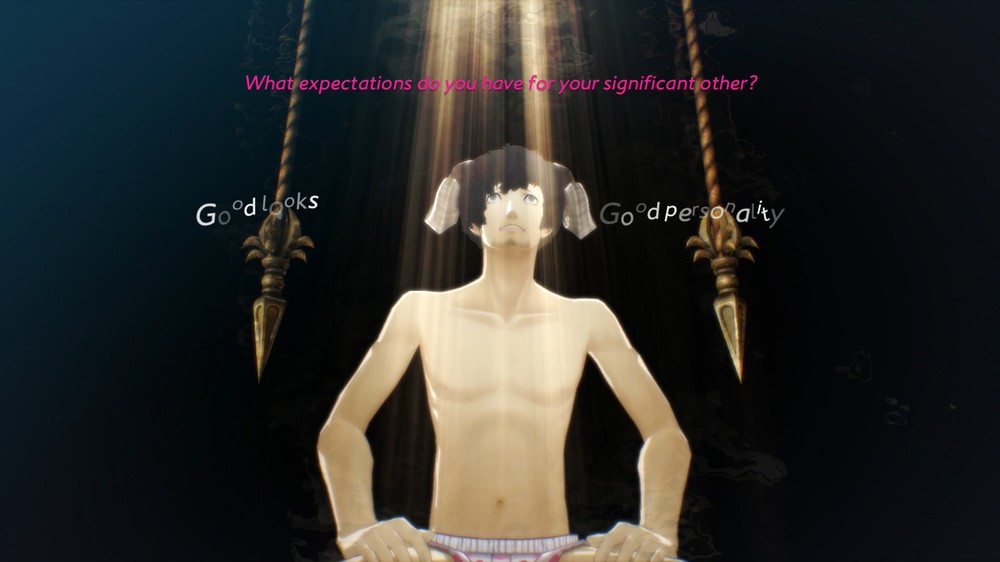 The final stage of each evening’s nightmare ends with a boss challenge – not so much a fight, but merely an added incentive for busting your ass up those blocks to reach the final exit, otherwise you might find yourself at the mercy of a killer bride with a fork, a killer baby with a pacifier, or a killer…well, you get the idea. It’s bad enough the levels are slowly crumbling out from below you, but these hideous monsters will really have you scrambling for the quickest route to the top.

The presentation for Catherine is what really sold me on the game to begin with. I fell in love with the whole Golden Playhouse presentation; almost like an episode of the Twilight Zone, and the in-game anime movies and cell-shaded conversation bits during the day have been upgraded to DVD-quality. There are also lots of new videos added to the game covering the new girl, Rin, and a few trips into Vincent’s past. Once you get into the puzzle parts the game starts to look all-too familiar with only minor changes in the theme and background design for each nightmare, but even this visuals have been greatly enhanced with better textures and cleaner edges with no aliasing or jaggies. The game looks consistently great and the 4K visuals really pop. Plus, I really loved the map screen that tracks your progress – very artistic. 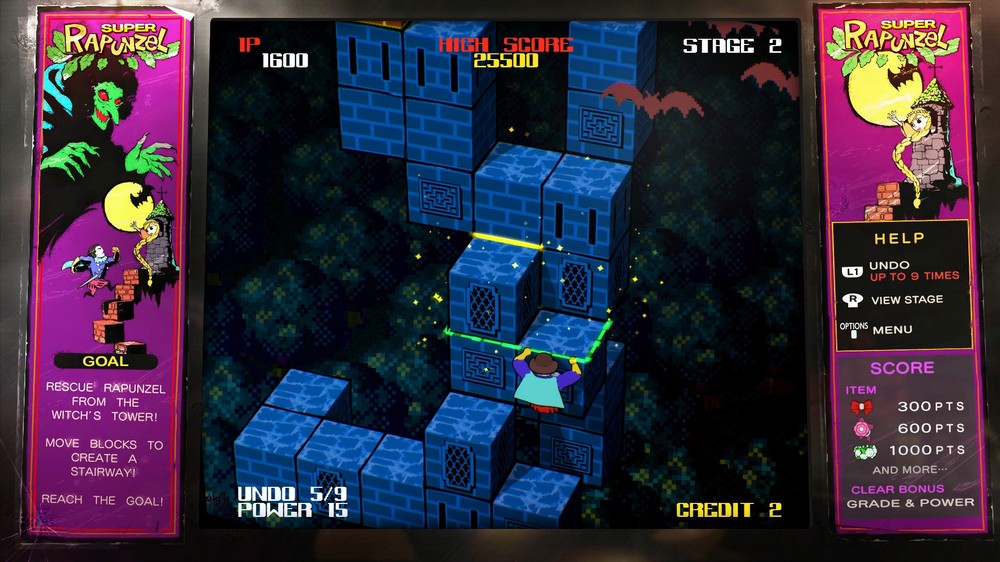 The audio package is a work of art with all sorts of amazing music; a lot of it new and original to this game and even a few themes from previous Atlus titles waiting to be unlocked on the jukebox. The daytime music created an almost soap opera feel to the narrative while the intense nightmare tracks really helped motivate me up those stacks. The voice acting was pure perfection from the accusing tone of Katherine to the sexy squeals of Catherine and charming innocence of Rin and all your buddies at the bar. The boss and the faceless quizmaster in the confessional booth are two other great performances. It was only this quality that kept the story remotely believable when it started to stray into the absurd near the end. 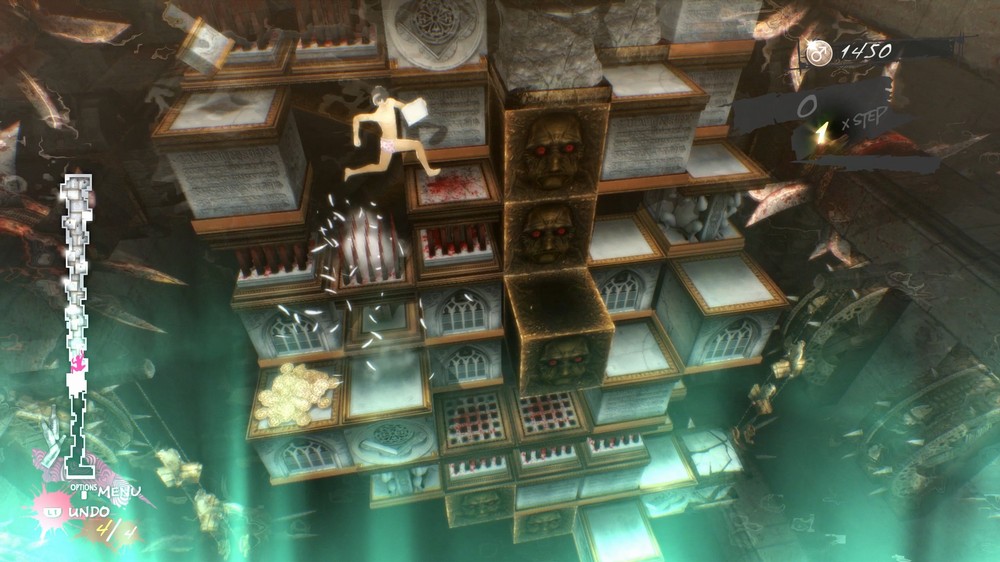 Catherine is a good 12-15 hour game depending on your skills in spatial awareness, logic, planning, and dexterity and you can double that time with all the new puzzles and the new Remix mode. Once you master the techniques things move along pretty well, and future replays can probably be finished in around eight hours if you want to see all the various endings. There are some really good end-game movies and achievements for those with the stamina and dedication to play this game multiple times. You are also scored and have Bronze, Silver, and Gold ranks for each nightmare that are tracked on leaderboards, and there is even a special co-op mode so you can play with a friend.

The DualShock 4 does a decent job of controlling Vincent as long as you use the superior D-pad controls. Playing with the analog stick can be problematic, especially in the later levels when you are spider-climbing around the back of the puzzles or always grabbing the wrong block. I had to make use of the “rewind” feature several times to reverse errant moves. 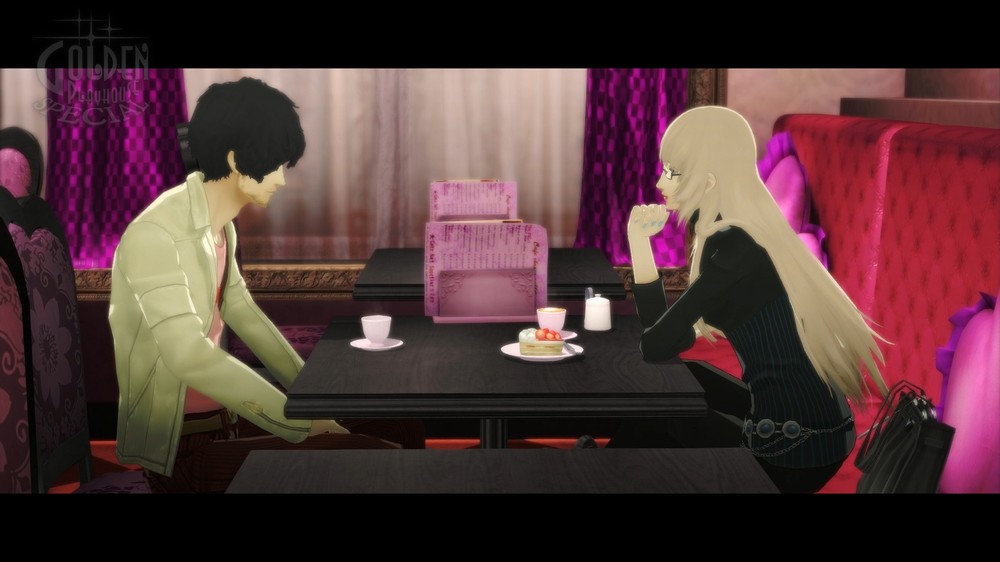 If you are looking for a challenging puzzle game that blends cool anime, amazing social dynamics, moral choices, and one hell of a crazy-ass story with a twisted ending (eight of them) then look no further than Catherine. This is the girl you’ve been waiting for, and she’s going to keep you up all night.