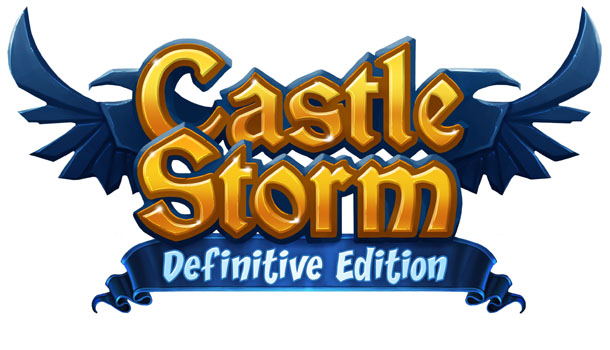 First-time owners are getting quite a gameplay deal with this release.

When Zen Studio released CastleStorm on the PS3 and Xbox 360 last year, the game became a true sleeper hit. An amalgamation of gameplay styles, CastleStorm was all over the map – the time-honored herding-strategy of Worms and Lemmings, the physics-based building and destruction of Bridge Constructor and Angry Birds, the fast-paced tower defense games like Defense Grid and Plants vs. Zombies, and even the medieval hack-n-slash bliss of Ghosts N Goblins.

This melting pot of casual gaming genres could have easily resulted in a title that was trying entirely too hard to be entirely too much – we have seen it many times before. Thankfully, Zen hit the nail squarely on the head with CastleStorm, delivering a one-stop-shop of a real-time strategy game that for the most part actually exceeds the enjoyment of the games that influenced it.

For 2014, we get a reboot of sorts for the new generation of consoles titled CastleStorm Definitive Edition. The most significant addition to the Definitive Edition is the inclusion of the “From Outcast To Saviour” and “Warrior Queen” expansion packs from last year’s title.  Of course, now the game is playable on the PS4 at full 1080p/60fps, but while this increase from the PS3’s native 720p to 1080p sounds like it might be impressive – the fact that the visual style is so heavily based in 2D cartoon design, the bump in HD is hardly noticeable. 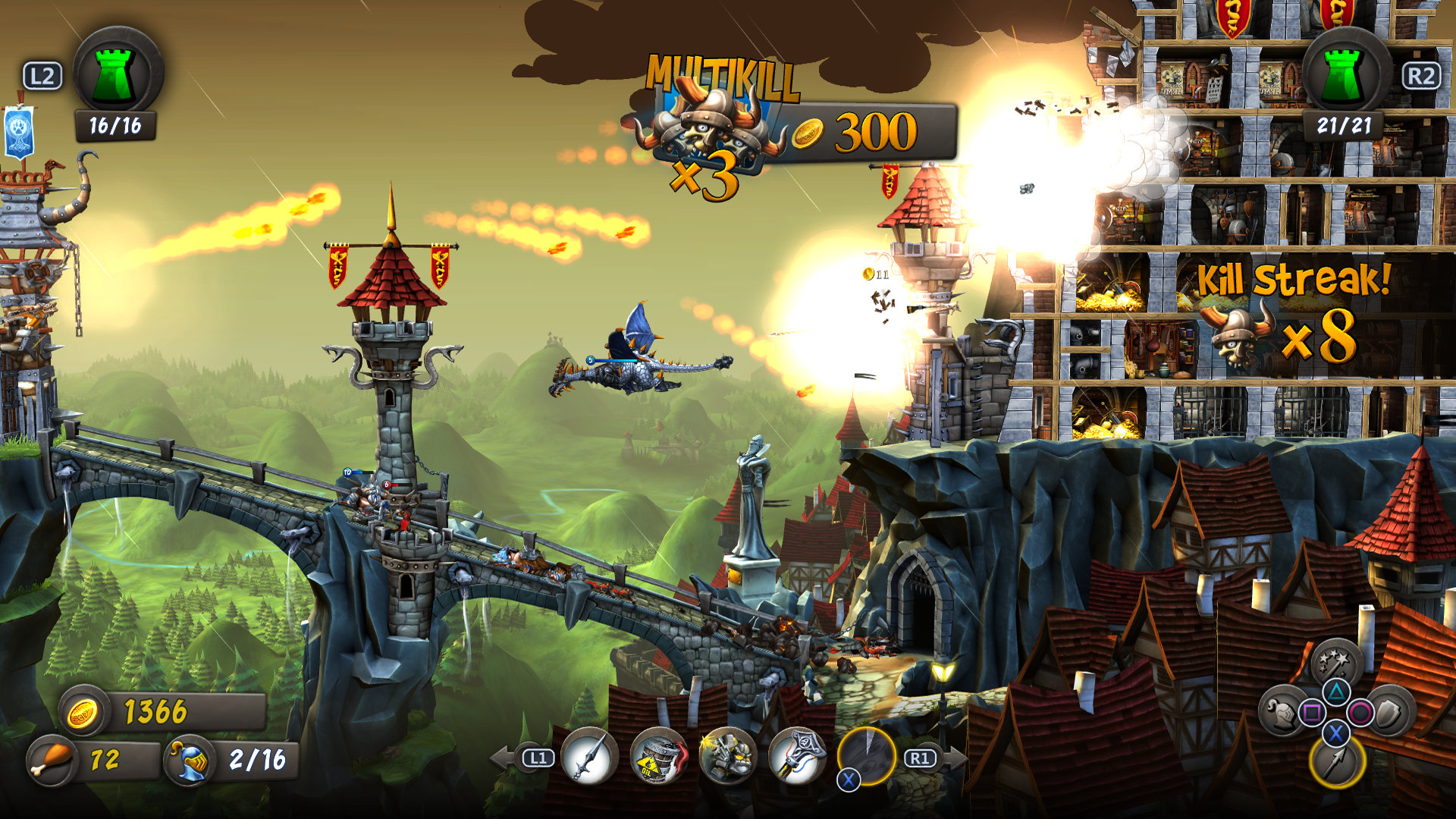 CastleStorm’s story takes place in a medieval setting, with the gamer taking on the role of defending a kingdom from either Knights or Vikings. The main weapon of choice is the ballista – kind of like a crossbow on steroids.  The ballista has various projectiles that can be fired from it ranging from simple arrow-like spears, to spiked balls, explosives, and more.

There are a number of gameplay mechanics running simultaneously during any given battle, which definitely takes some getting used to. Thankfully, the multitasking aspect of the game is made much more manageable by intelligent decisions Zen made when it came to the designing of the controls and the console-friendly real-time gameplay (rather than turn-based).  Both of these aspects make what could be a confusing and tedious game into a fast-paced, edge-of-your seat experience in which the gamer generally feels in total control.

The first order of business is to defend your castle and keep the enemy from breeching the front gate. Gamers can fire directly on the advancing enemies using the ballista, they can spawn their own knights and sentries to fight for them, or they can warp to the battlefield as the “Hero” – a strong and handsome knight, armed with a powerful sword and bow.  None of these tools are exclusive – gamers can mix and match any or all as they see fit.  They will however realize that “friendly fire” is definitely not overlooked, and gamers can easily kill their own soldiers with an ill-aimed ballista spear. 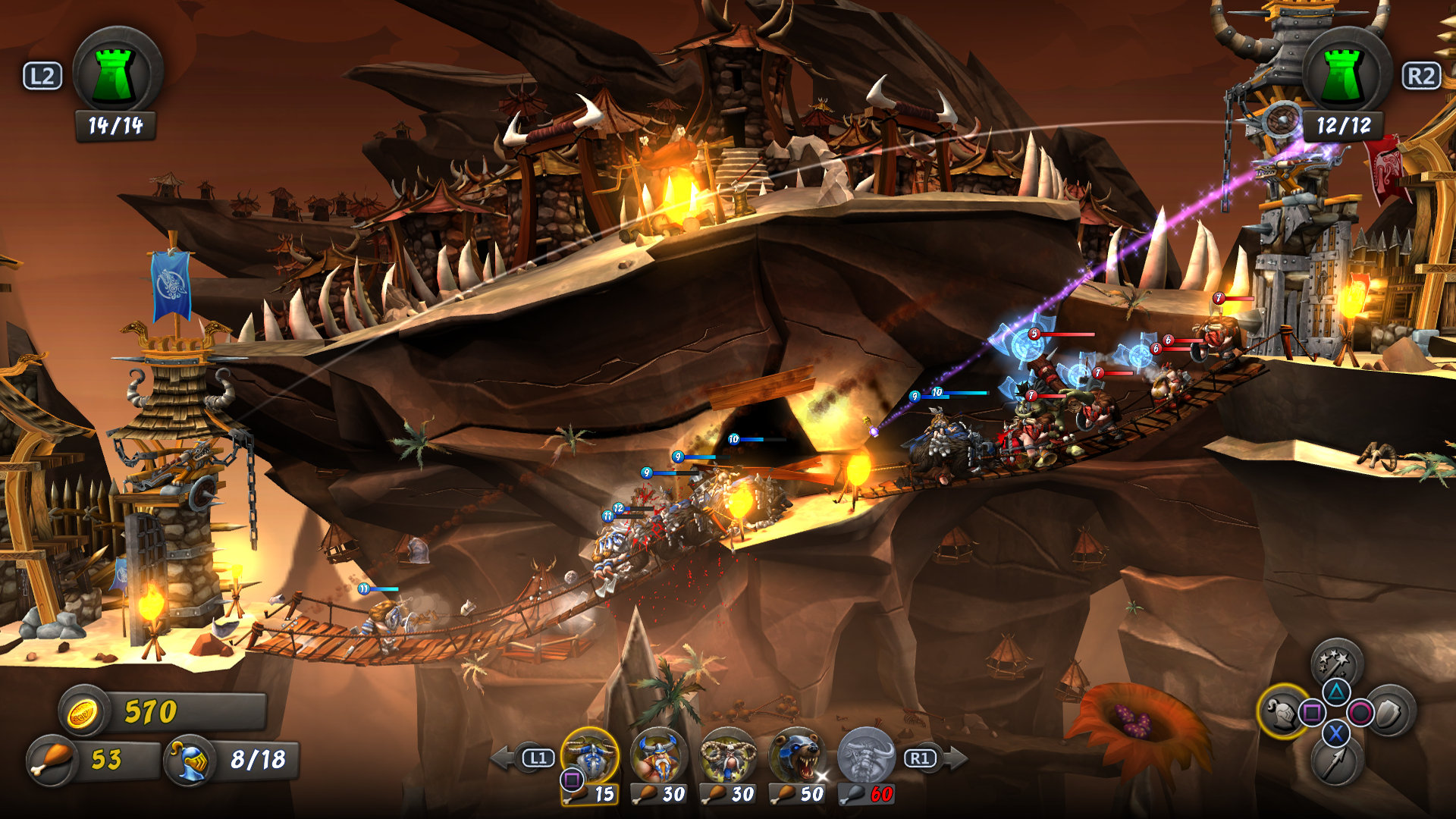 As mentioned earlier, all of the combat in CastleStorm is real-time, for the most part. I say that because there is just the slightest delay between hitting the button and each attack being performed.  Thankfully this delay is consistent and can be accounted for – but it does take away a bit from the fluidity of the gameplay.  With respect to the ballista’s weapons and the spawning of the soldiers and Hero – each takes a prescribed amount of time to “recharge”.  This means that gamers will get very fluent in navigating the initially-confusing, but ultimately-intuitive controls.  But it does take some time, so do not get discouraged early on.

The second task is to protect the kingdom’s flag – which is housed within the walls of the castle. Once the intruders have breached the front gate, they will grab the flag in an attempt to take back to their kingdom.  Again, gamers can try to stop this using the aforementioned tools; the ballista, soldiers, and/or the Hero – but at this point he enemies are much harder to hit and are moving at a much more rapid pace.  In the event the flag is dropped, the gamer will then have to pick it up and get it back to the castle.  This is easy if the Hero is available, but not so much if the soldiers are the only character available.

Finally, the gamer is tasked with destroying the enemies’ castles. This is where the game begins to really resemble Angry Birds – where gamers must use explosive and destructive projectiles to dismantle the enemy castle wall-by wall until it collapses.  But there are no single-hit sweet-spots in CastleStorm, so the castle segments are require a lot of strategy and time.  Given the fact that all the while the invaders are still attacking the gamer’s castle, trying to destroy it and get the flag – I think you can see where this game suddenly gets tense. 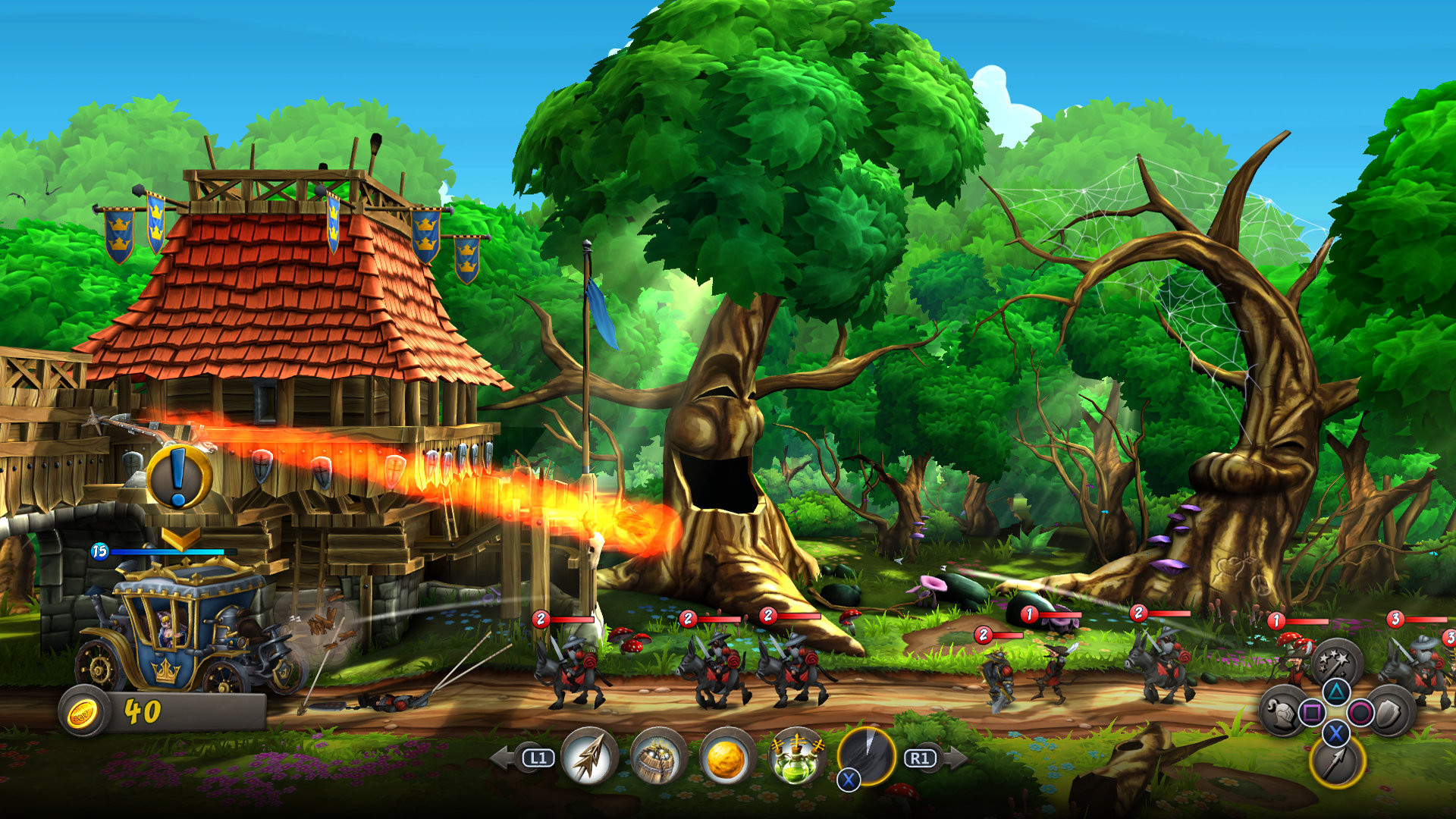 In between these major battles, gamers will find themselves in a series of minor battles and challenge levels. The main purpose of these levels is to be awarded gold coins which can be used to purchase equipment and upgrades.  The major battles will take upwards of 10–15 minutes each when all is said and done, and the challenge modes might take a minute or two.  The difference in duration does not equate to difficulty, though as each is challenging, yet rewarding, in its own way.

CastleStorm has a decidedly old-school cartoon look about its characters – ranging from the portly cherub-faced elders to the wiry-long faced minions, from the handsome Hero to ghastly attack beasts – the game’s character would look perfect in a mid-1980’s Disney cartoon. The game lacks voiceovers – instead delivering dialog in the form of text box overlays.  While this generally tends to put me to sleep, the fact that the writing was moderately humorous and interesting was enough to help me stay focused. 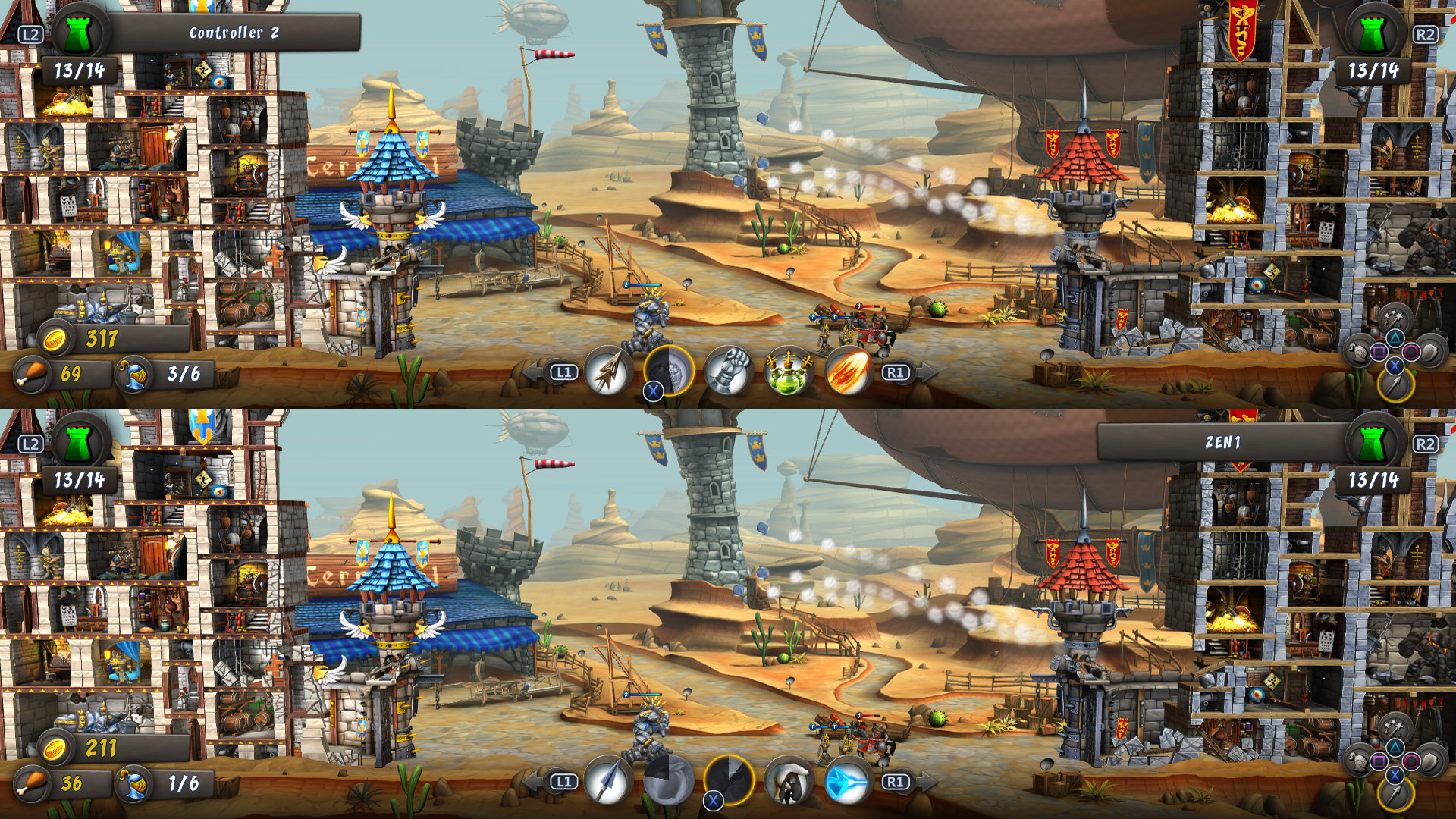 CastleStorm has a few options for online play – including two-player competitive skirmishes, and the fantastic co-op survival challenges.   The competitive skirmishes allow players to go face-to-face defending their own castles they have developed in the Lego-like castle editor.  The co-op survival assigns one gamer to the hero, the other to the ballista, and the gamers must work cooperatively to hold back the enemy intruders.  Both of these modes are incredibly exciting the few times I played them, but at the time of this writing finding another gamer online was all but impossible.

CastleStorm is one of those unique games in which the whole is definitely greater than the sum of its parts. It borrows heavily from some very obvious sources, but it delivers a unique fast-paced gameplay experience that is very unlike the games it is trying to emulate.  This is a good thing.  Gamers who have even the slightest inkling toward casual gaming genres are sure to find something to be enjoyed in CastleStorm and first-time owners are getting quite a gameplay deal with CastleStorm Definitive Edition.

That being said, it would have been nice if Zen and Sony had treated CastleStorm like other Cross-Buy hits – like Flower and The Unforgettable Swan – and simply made the PS4 versions accessible to their previously-purchased PS3 owners. But as it stands, the barely-noticeable bump in visuals, even with the two expansion packs kicked in, aren’t enough to warrant a second purchase. 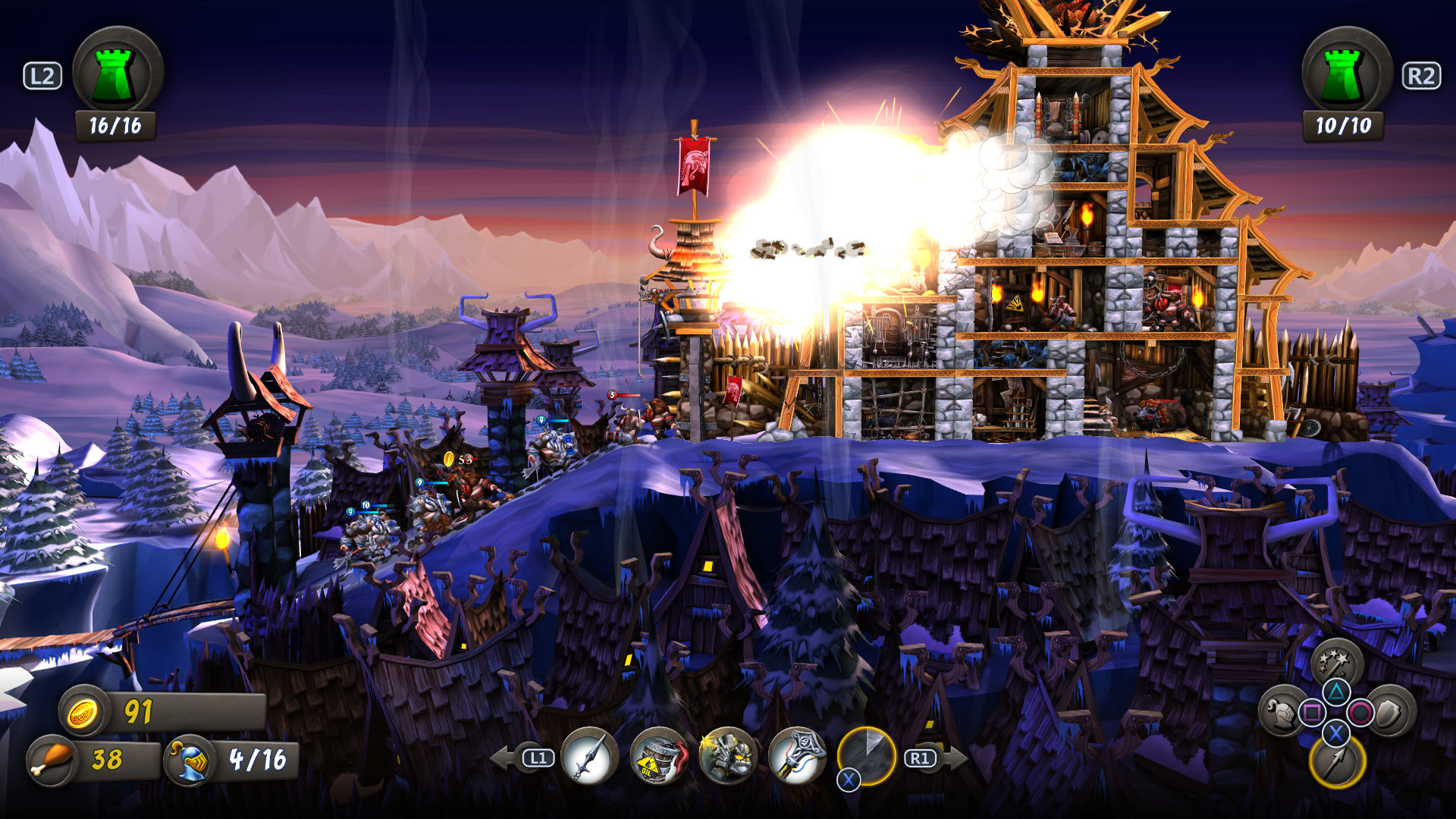 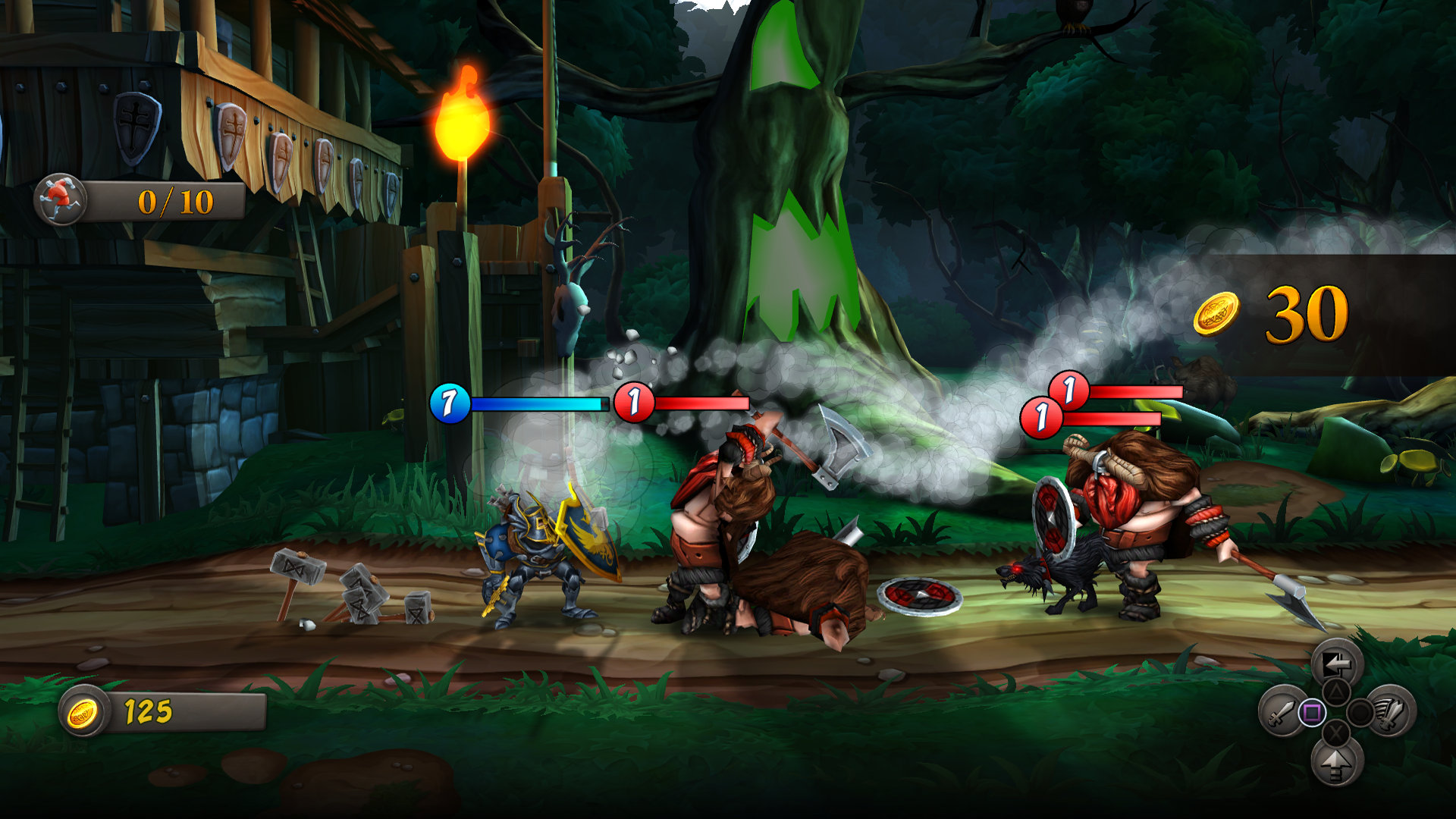 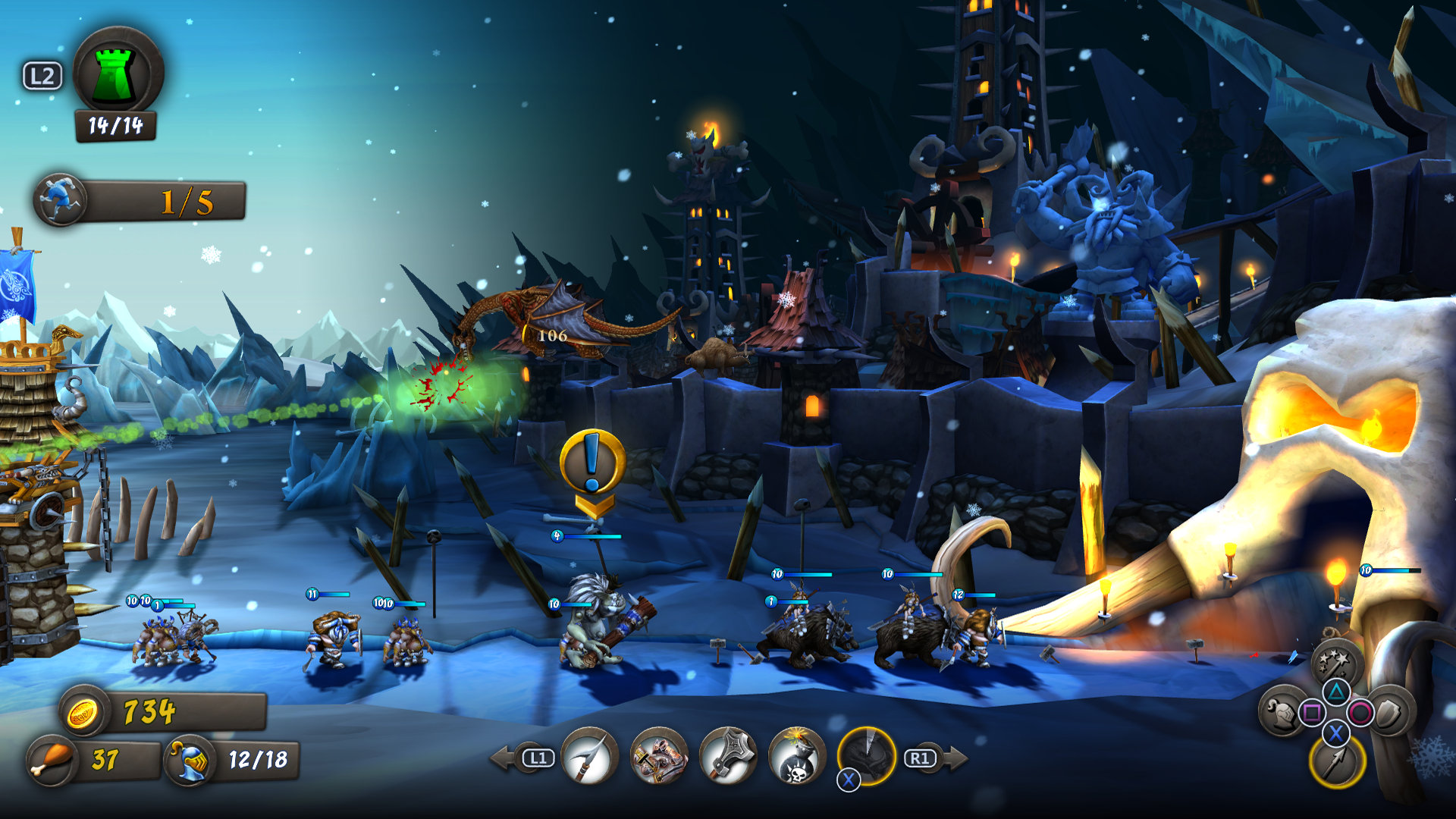 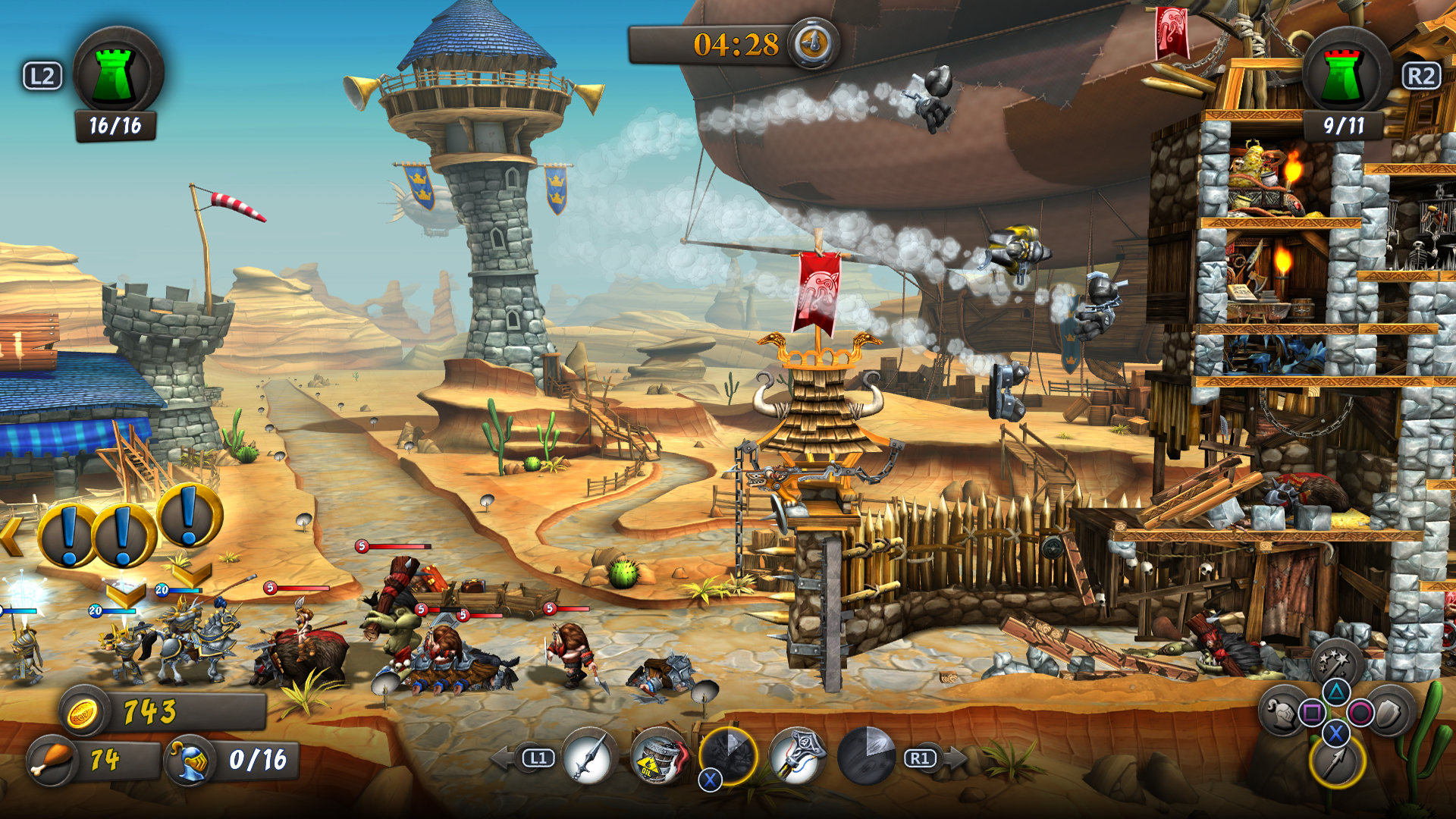