SIZZLIN'
TOP 10
1
879
The Walking Dead: Saints & Sinners Review – Oculus Quest
2
751
Take to the Skies and Choose a Side in the New Trailer for Next Generation Air Com...
3
751
CRASH BANDICOOT 4: IT’S ABOUT TIME IS AVAILABLE NOW
4
751
The Falconeer First-Look Preview – PC
5
751
Metamorphosis is 33% Off on Steam!
6
751
Werewolf: The Apocalypse – Heart of the Forest launches on October the 13th
7
751
Synth Riders Celebrates Anniversary with a Month Full of Treats and an Oculus Ques...
8
751
Worm Jazz Review – PC
9
750
Frictional Games Shows Off First Gameplay Footage of Amnesia: Rebirth
10
750
Join the Galaxy’s Finest as Star Wars™: Squadrons Soars Into Homes Today
Video Games
Editors Choice 476 views 2 likes 0 comments
Posted May 25, 2013

A triumphant redemption for the Call of Juarez franchise and easily one of my favorite FPS games of 2013.

Call of Juarez: Bound in Blood was one of my favorite FPS games of 2009, and then something went terribly wrong when Techland tried to modernize the sequel in 2011 with Call of Juarez: The Cartel. Despite some very loose ties to the Wild West original, this sequel was a horrible mess and I was sure sealed the fate of this potentially awesome franchise. But here we are two years later with a third game; a game that goes back to those Wild West roots in a way so original and so impossibly cool that it may just get my nomination for best FPS of 2013.

Call of Juarez: Gunslinger is an epic look into America’s past, this time dealing with some of the most legendary outlaws in Wild West lore, but the biggest outlaw is going to be YOU when you “steal” this game for only $15. Whether you buy it on Steam for the PC or off of a console marketplace, you are going to get this AAA-quality game for a quarter of the price you should be paying, so buy it now before Ubisoft comes to their senses.

You play as legendary bounty hunter, Silas Greaves, a grizzled old-timer who bellies up to the bar to spin 14 chapters worth of tall tales and high adventure to anyone who wants to listen; in this case a skeptical gentleman, an impressionable boy, and a busty barmaid. This is the Wild West version of Forrest Gump, not only in the nonstop narration while playing the game, but also in the way that Silas’ story manages to link him to nearly every major outlaw in U.S. history as well as numerous events. Apparently he was responsible for the misunderstanding that triggered the shootout at the OK Corral, not to mention the surprise reveal of one of his listeners at the end of the game. 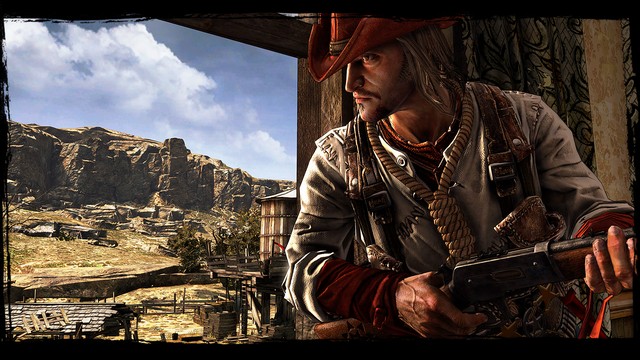 Silas spins a lively and detailed story that unfolds before you in stunning (I mean stunning) graphics that are second only to Crysis 3. The new Chrome5 engine is amazing and I can’t wait to see Techland’s next project. For those that played Bastion, you might recall the awesome narration in that game; narration that was dynamically generated based on the players actions. Well, in Gunslinger, that narration actually dictates the gameplay. In several instances you’ll be playing the game and suddenly Silas will hesitate as if he is remembering something he forgot, and then the story (and gameplay) will go into this sepia tone and rewind and you get to replay the corrected version of the story. In some instances you’ll play multiple versions of the same event.

Similarly, Silas might start to exaggerate a bit and when his audience calls him out he will correct himself as was the case when he claimed to be “surrounded by a hundred Injuns!” “Really…a hundred?” “Well at least a dozen,” at which point the game will pause and Indians start to vanish from the screen. Perhaps the most surreal moment of the game was when Silas excuses himself to “drain the one-eyed snake” and the game goes into a stylized sepia tone slow-play mode until he returns to pick up the story. Meanwhile you get to eavesdrop on his skeptical audience who start to question Silas’ memory of the facts.

But all of this is just stylish ambiance for the great gameplay waiting in Gunslinger. Throughout 14 thrilling chapters you will fight alongside and hunt down some of America’s greatest villains such as Pat Garrett, Jesse James, Butch Cassidy, Billy the Kid, the Dalton brothers and many more. You’ll engage in epic shootouts in some amazing outdoor locations, dark caves, rocky mountaintops, authentic old towns, and even a daring assault on a speeding train before it all comes to a chilling climax in a ghost town complete with haunted cemetery and the first truly authentic Mexican standoff in gaming history.

The FPS action is fueled by a robust RPG element that allows you to earn XP for killing your enemies and spending it to upgrade numerous skills in any of three skill trees including rifle and pistol abilities. Faster reloads, extended clips, and dual wielding are just a few of the skills you can add to your growing arsenal and while you cannot max all the trees out in a single pass of the game, there is a New Game+ mode as well as a True West difficulty level that will tempt you into a second pass through the game almost immediately. 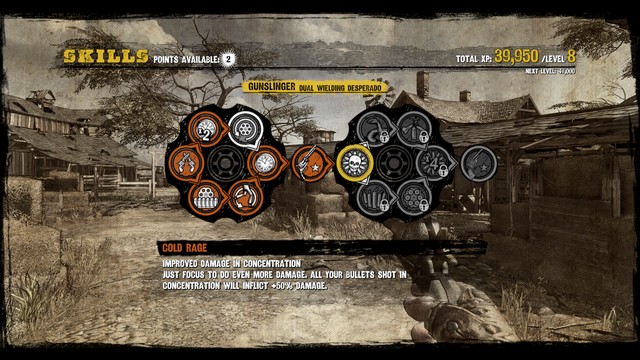 You have a great selection of weapons including six-shooters, rifles, shotguns, and saw-off varieties of the same. You can also toss and shoot bundles of dynamite for some explosive results, especially after you upgrade a few skills to enhance the effect. It’s up to you to decide which weapons to use, when to use them, and which ones you want to invest your XP into. Rifles are great for long-range combat and headshots that can earn you bonus XP, while shotguns are great for close-quarters battles indoors, and pistols (especially when dual wielded) work well on groups of enemies and extended combos. Enemy AI is mostly stationary, so the game plays out like a game of Wild West Duck Hunt, but a few special enemies will boldy advance on your position.

As you kill enemies you will slowly build up XP as well as fuel the gauge that you can trigger at any time for a moment of heightened awareness. In this mode targets will pop off the screen in bright red and time slows down allowing for the easy aiming and taking down of multiple enemies. It’s a nice system to have for emergencies but balanced in such a way that you are never tempted to abuse it thanks to the precise aiming controls that had me racking up consecutive headshots on my PC using a 360 controller. Another cool aspect is the Last Breath feature. If your health is so low that the next bullet is going to kill you then you get to see that fatal bullet coming at you in slow motion and you can Matrix-dodge using the analog stick. You even get to do this in some of the later duels.

Naturally, each chapter ends in a boss battle that plays out like your stereotypical quick draw shootout. In this mode you’ll need to keep the floating circle hovering over your target. As the circle shrinks your focus increases and when you start to hear your heartbeat you watch for your opponent to reach for his gun and then you pull your trigger to hopefully draw yours first. You then have to wait for the crosshair to appear and steer it over the body and pull the trigger again to fire. While you are allowed to draw first, history will remember you as a coward versus an honorable man, and this will reflect in your post-chapter score card. 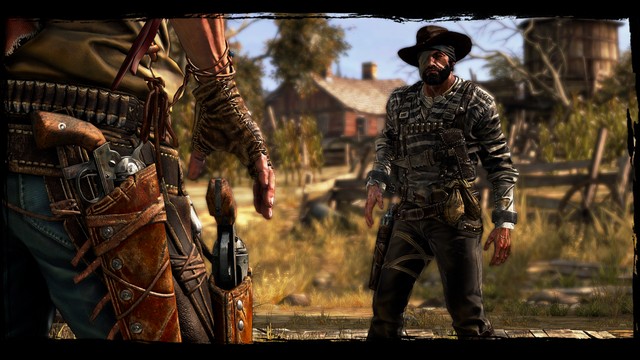 While the gameplay is pretty much the same throughout the course of this 8+ hour adventure the unique landscapes, settings, and situations always keep a fresh spin on the action. Plus you have plenty of secrets you’ll need to keep an eye out for. These are pretty well hidden, some of them in alternate story realities; but you can unlock a skill early on that will help you find most of them, plus you can replay completed chapters from the menu if you want to find those your missed. I found 40 out of 54 on my first pass without going too far out of my way looking. I was just too engrossed in the story and action to find the rest.

And that’s the best part of Call of Juarez: Gunslinger; the story. The narration is effortlessly integrated into exactly what you are doing and seeing on the screen and the voice acting for Silas is superb. The authentic Western flavored score and awesome sound effects for guns and the lifelike environments are incredible. It is worth noting that there is an audio glitch if you try to run this game on a 7.1 surround sound system or headphones, but this can be fixed by lowering your setting to 5.1 until the game is patched.

From start to finish I was totally captivated with every moment in this game. I plowed my way through Call of Juarez: Gunslinger in two four-hour sessions and can’t wait to dive back in at the new unlocked skill level so I can find those missing Nuggets of Truth and max out my remaining skill trees. This is without a doubt a triumphant redemption for the Call of Juarez franchise and easily one of my favorite FPS games of 2013. 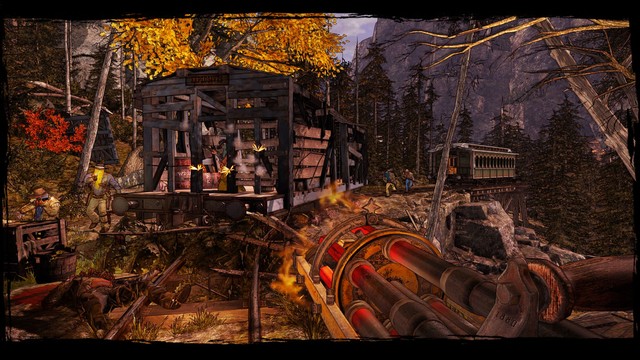 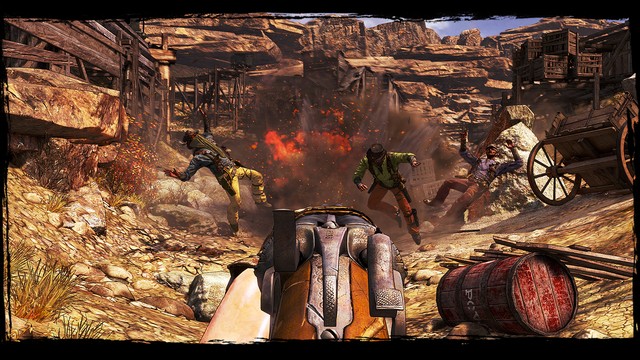 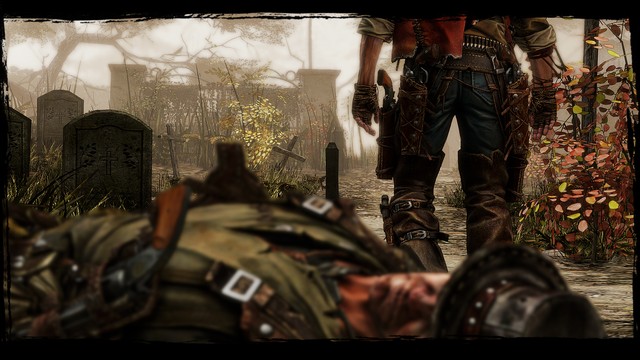 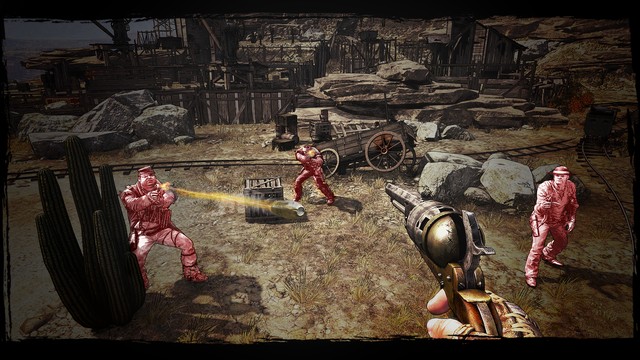 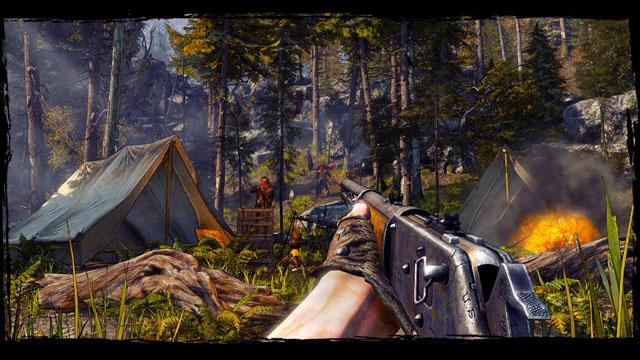 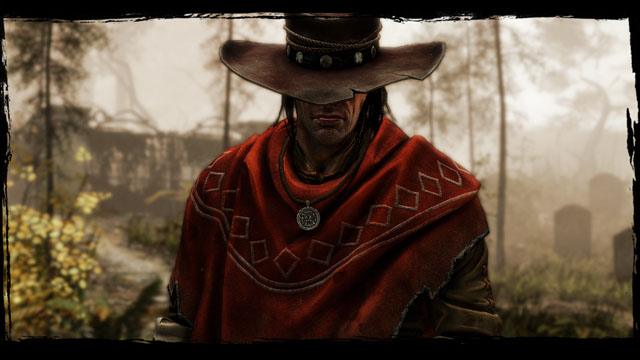 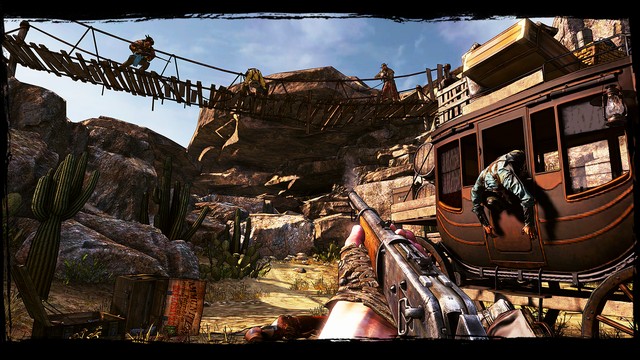 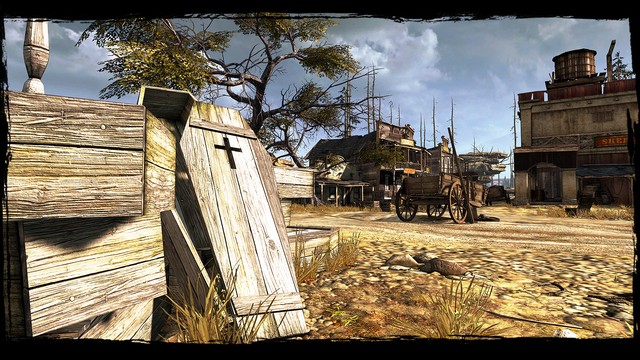 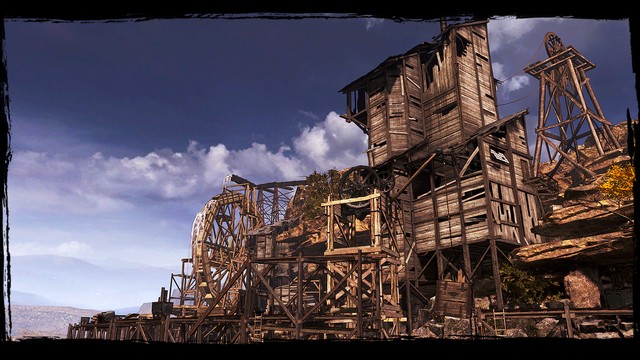 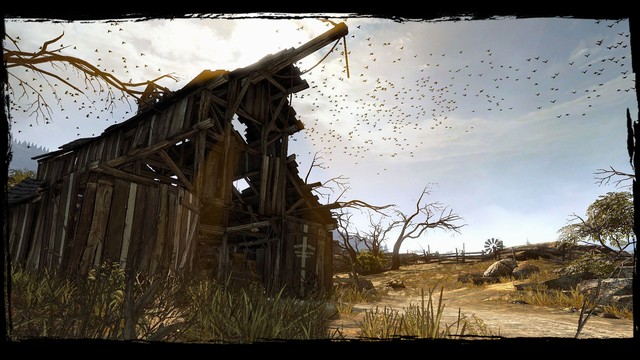 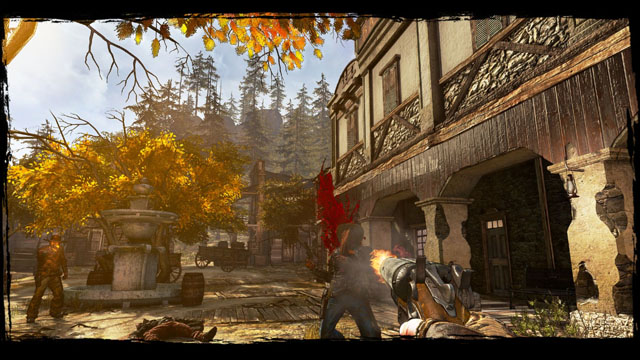 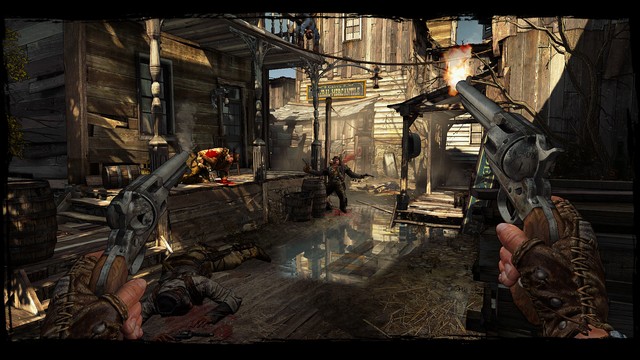 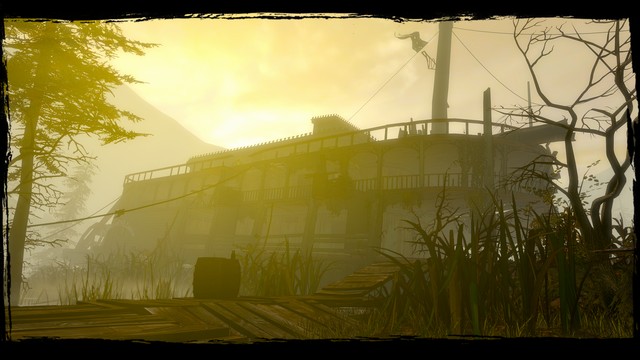 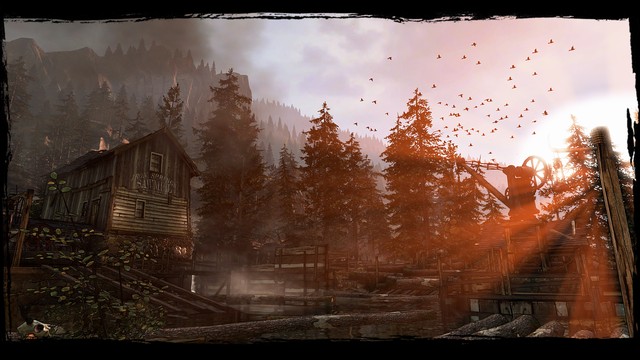 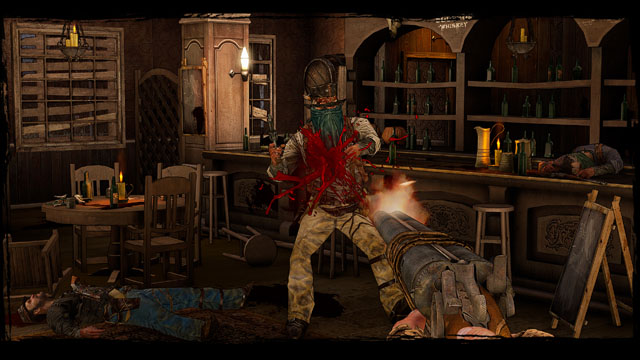