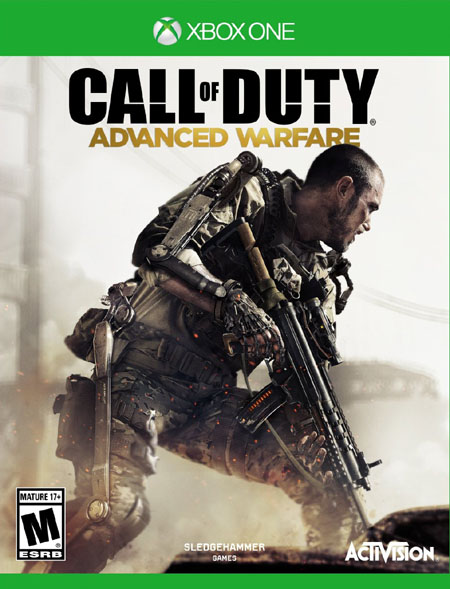 Story mode is short, linear, and predictable
Graphics are still not very next-gen
Frequent and awkward pausing during checkpoints

A positive step in the right direction and a solid foundation for a new future.

Yearly installments of Call of Duty are just as predictable as the annualized sports releases from EA, and the fact that multiplayer Call of Duty has become something of an e-sports phenomena it’s only a matter of time before Activision drops the subtitle and just starts putting the year after the name.  Arguably, Activision seems to be trying to get their money-printing franchise out of its slump, and Sledgehammer games has definitely tried to breathe some fresh air into the series, but is Advanced Warfare enough to do the trick?

Last year’s Call of Duty: Ghosts was met with mixed reviews by critics and fans, and by “mixed” I mean mostly negative.  People criticized the story, which ironically, I found pretty interesting, but I think we can all agree the multiplayer – the meat and potatoes of the franchise – was broken from the start and if they ever did get around to fixing it most of the community had already moved on.  So basically, the franchise had nowhere to go but up.

Call of Duty: Advanced Warfare takes the game 50 years into the future; a future where the world is still at war and these wars are being fought by companies rather than nations.  It is a prophetic story rooted in the reality of today where private military corporations (PMC’s) are hired by governments to fight our wars for us.  By shifting the timeline into the near-future Sledgehammer is given unparalleled creative freedom when it comes to designing new weapons and futurist gadgets as well as the most important item in the game – the Exo Suit. 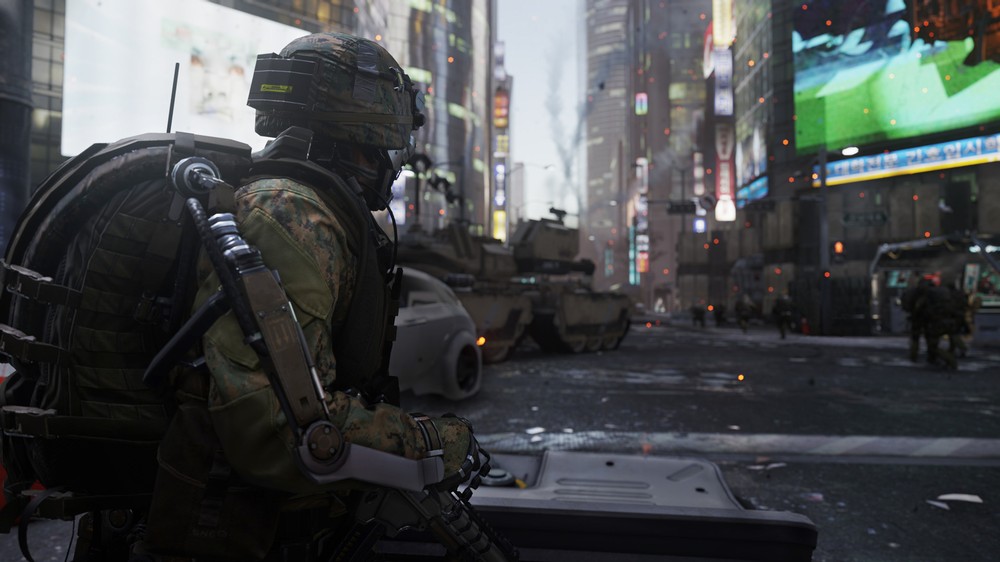 Comparisons to Titanfall are inevitable when it comes to the Exo Suit and the abilities it bestows upon the wearer.  Your suit has boosters on it allowing for incredible leaps, gentle free-falls from the tops of skyscrapers, and even a turbo dash side dodge or forward attack.  About the only thing you can’t do is run up or along walls, but with the aid of some magnetic gloves you can scale select metal surface like Spider-Man.  Speaking of the arachnid superhero; later in the game you will get a wrist grapple device that allows you to do point-to-point transfers or even grapple a soldier right out of his battle armor.

I’m probably one of the few people who come to the Call of Duty party for the story because quite frankly, I suck at the multiplayer.   As previously mentioned, Call of Duty multiplayer is a “sport” and I simply don’t have the time to practice and master this sport to the point where I am remotely competitive.   For those who only play a few games each year and have the time to devote 100+ hours to mastering the nuances of the Pick 13 system, the thousands of mods and weapons configurations, and learning every tactical inch of every multiplayer map – more power to you.

When it comes to the story and single-player campaign I was expecting so much; especially after it was announced that Kevin Spacey was playing a pivotal role in the narrative.   I am honestly shocked that so many people are saying this new story is better than Ghosts.   Actual “story” yes, but as far as the maps, locations, and situations, Ghosts was much better when it came to diversity of location and gameplay.   Advanced Warfare’s story mode is short; clocking in at right around six hours on Hardened mode, which puts it dangerously close to Battlefield 4 in terms of length. 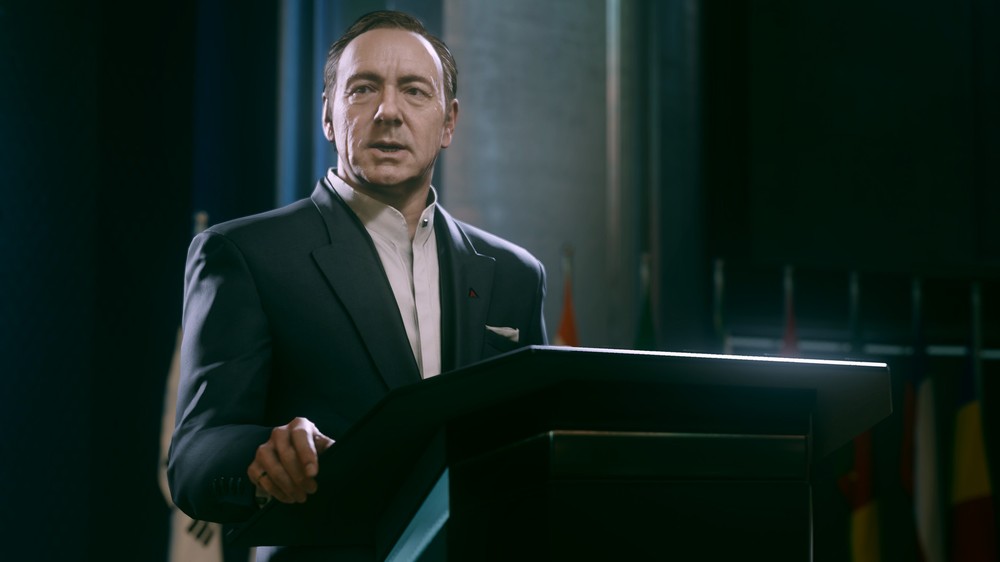 For those who live by the motto, “size doesn’t matter” we can break down those six hours into some relatively uninspired and extremely linear shooting gallery levels.  Linearity has always been a signature problem with the series, but never before have I felt so much “hand holding” and button-prompting.  Cool gear like the wrist grapple that could potentially open up the game is instantly limited by a linear series of grapple points taking you up the side of a building on a predetermined path stocked with preloaded bad guys.   From time to time you get to do non-soldiery things like fly a spy drone, drive a prototype tank or fly a cool jet through a canyon trench in an homage to Ace Combat, but these moments are few and oddly all crammed together near the middle of the game.  It would have been nice to spread out the diversity.  For me, the one shining moment of the entire game was a nighttime stealth mission where, if you do it right, you won’t fire a single shot.

Kevin Spacey pretty much saves the story, and I enjoyed his duplicitous portrayal of the charismatic Jonathan Irons, CEO of Atlas, a PMC who ultimately gains enough power for him to declare war on war itself.   You play a soldier and best friend to Jonathan’s son, Will Irons, who dies in the opening level in a devastating accident.  That same accident also costs you your left arm which Atlas replaces with a shiny new prosthetic arm making you the new star soldier at Atlas.  Predictably, you find yourself joining rebel forces after Atlas reveals its true colors, and only you can stop their evil plot to biologically and selectively eliminate millions of the world’s population.  If this sounds like a hackneyed plot to a James Bond movie you wouldn’t be far off – Moonraker anyone.

While the single-player portion of the game was short and uninspired I was surprised at how much I found myself enjoying the multiplayer this year, but then I realized something.   One of the few multiplayer combat games I have “ever” enjoyed was Titanfall for one simple reason – my ability to stay alive longer than 20-30 seconds.  My survival in that game was mostly due to my mobility, and now Call of Duty offers that same level of mobility with the Exo Suit…at least after you master the nuances of the mid-air dash. 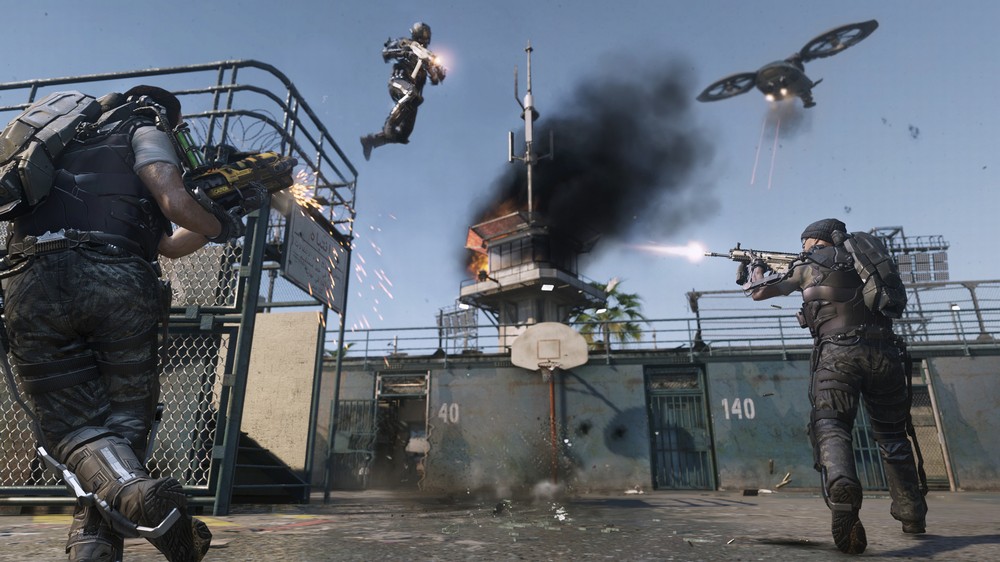 Multiplayer stems from the Pick 13 system (originally Pick 10 in Black Ops 2) that allows you to create the perfect solider tailored to your specific gameplay strengths.   New Exo Abilities and Launchers add tremendously to the diversity of gameplay and there are many more variants to the weapons than ever before with all sorts of attachments and newly retooled sights.  Wildcards are in play to add additional attachments and perks and with ten grenade types you may spend as much time equipping your soldier as you do playing with him.

One of the best ideas ever has finally been implemented, and we now have a firing range where you can go to test your current loadout before embarrassing yourself in an actual game.  This is a great way to familiarize yourself with and perhaps even master new weapons and gadgets before heading out onto the battlefield.

I did appreciate the shift to score streaks versus kill streaks.  This forces people to actually complete mission objectives if they want to earn points to level up their character, although let’s face it – people are still running around levels madly shooting with no purpose other than to bolster the KD ratio.   Multiplayer is only as fun as the people playing it allow it to be, so I can’t stress enough the importance  of going into this game with a team of friends who like to work together.  If you do you will clean house on 60% of the headless chickens running around these maps. 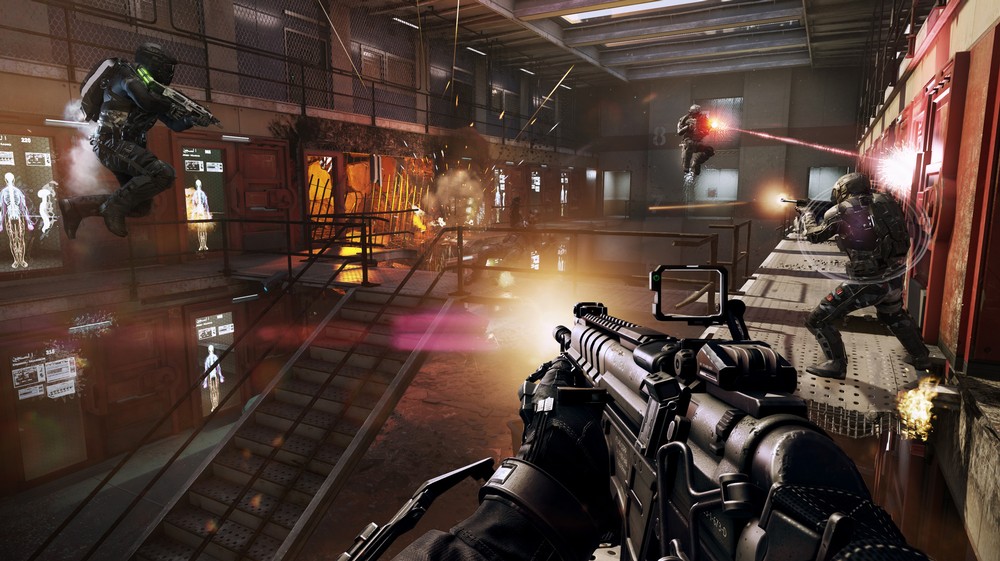 I would go as far as to compare Advanced Warfare to Unreal Tournament.  Mobility is greatly enhanced and the levels make the most of your new vertical boost ability.  Everyone is zipping around the levels making sniping nearly impossible.  Games play faster and your survival time between deaths is greatly increased, which makes the game that much more fun to play.  The maps are tactically well-designed and there are no serious spawning issues as of yet – certainly nothing as broken as Ghosts.

The game is in dire need of some dedicated servers.  There are some serious lag issues and even some cheating on the current P2P servers, although Activision has promised dedicated servers are on the horizon.   Once those issues have been resolved I have no problem declaring this the best multiplayer Call of Duty since Call of Duty 4: Modern Warfare.

For those looking for some co-op action, you can enjoy two-player local split-screen or up to four online in wave-based survival levels that take place on the multiplayer maps.   This mode and the variety of challenges and objective-based scoring is fun enough but it fails to be as memorable as past games that had you fighting off zombies and aliens.  Hopefully, future DLC will fix this.  It’s still a fun way to enjoy the Call of Duty experience without all the insanity of traditional multiplayer.   It’s also a great way to develop team tactics and communication skills that you can take into those other online modes. 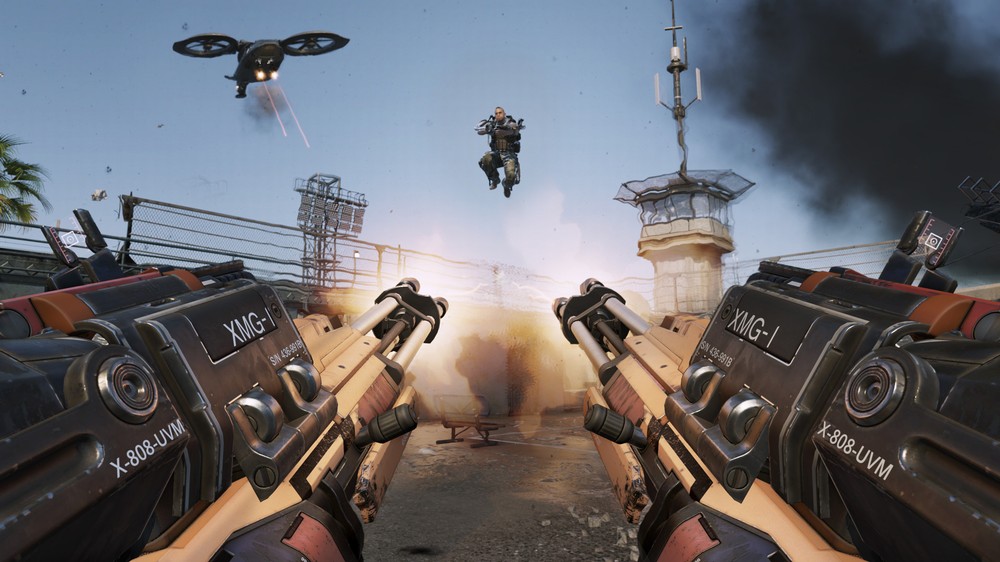 Call of Duty: Advanced Warfare is once again releasing on last and next-gen systems (cut the cord already) and once again the PC is the decisive winner when it comes to technical presentation and overall quality while the PS4 is clearly the better option for console players.  The Xbox One renders a native 1920x1080p image but only in certain select areas; usually interiors and areas void of any action or NPC’s that might stress the GPU.  Most of the game runs at a 1360x1080p mode; a resolution that seems to upscale slightly better than the 900p image from last year’s Ghost.  Even so, the resulting image on the Xbox One is a far cry from what is possible on the PC or even the PS4 and its superior GPU.

Xbox One graphics are less detailed, blurry in places, and even suffer from shimmering and anti-aliasing issues as well as frequent and annoying screen tear.   The Xbox One also suffers from annoying pauses where the game will momentarily hiccup every time the game checkpoints – which is about every 60-90 seconds.  While it is easy to overlook many of these superficial flaws when the gameplay is unfolding at Mach 2, some of them are serious and frequent enough to take you out of the moment.

Call of Duty: Advanced Warfare is a positive step in the right direction.  No one will argue that this franchise was getting stale.  Sledgehammer has given the series an infusion of fresh blood, new ideas, and taken some daring risks with the established formula – risks that will hopefully pay off in the future.  While I can’t deny the cinematic power of the six hour story mode or the epic factor on any of the major set pieces, the solo game seemed more like an interactive movie than a fully realized FPS.  It was a fun ride for as long as it lasted but for the first time ever I think I will be spending most of my time in the multiplayer…at least until Call of Duty 2015 ships next November. 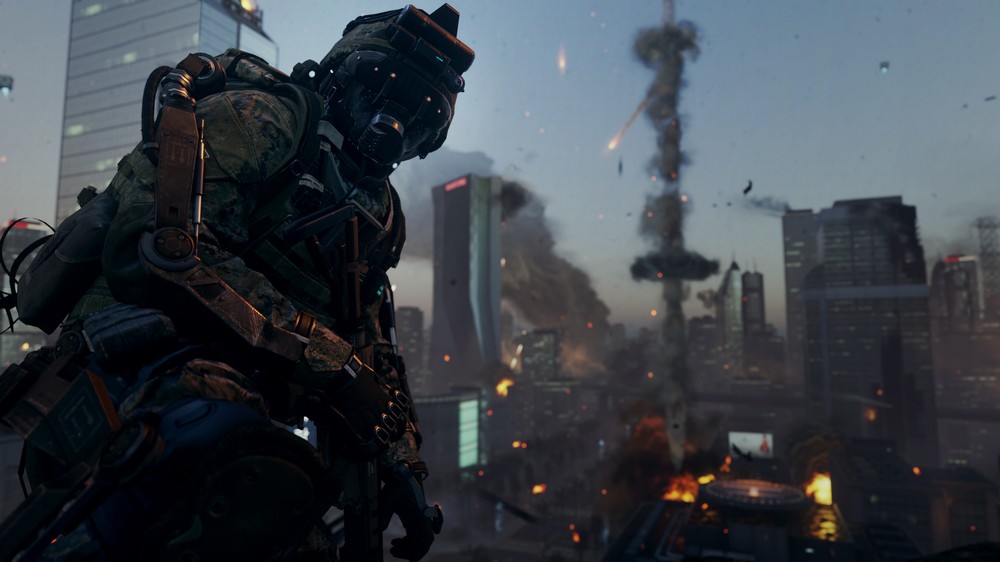 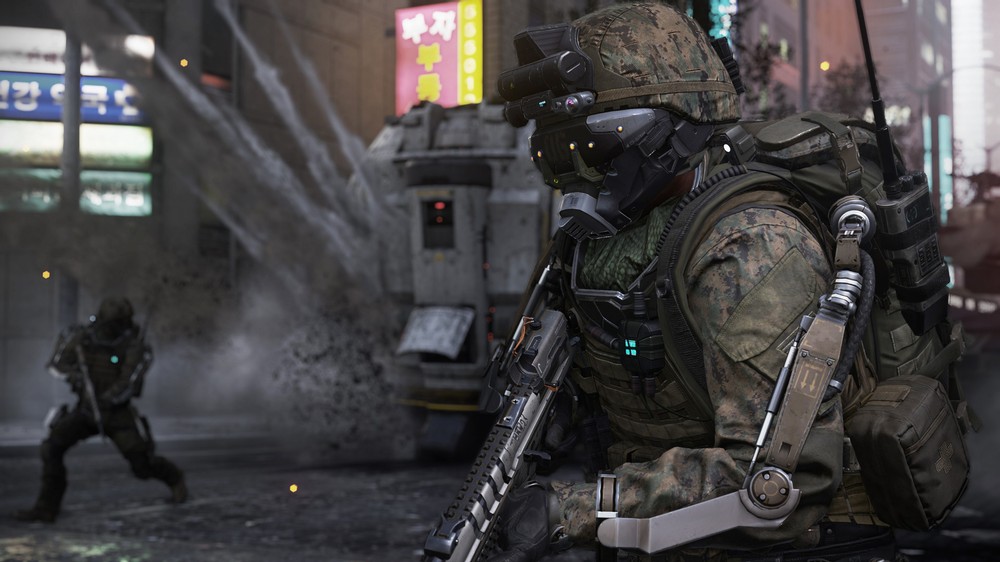 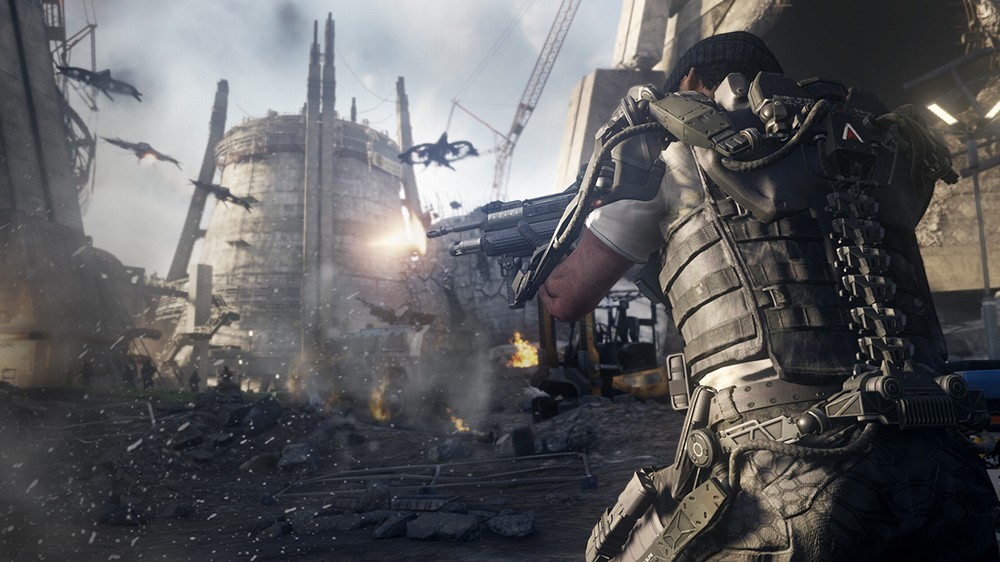 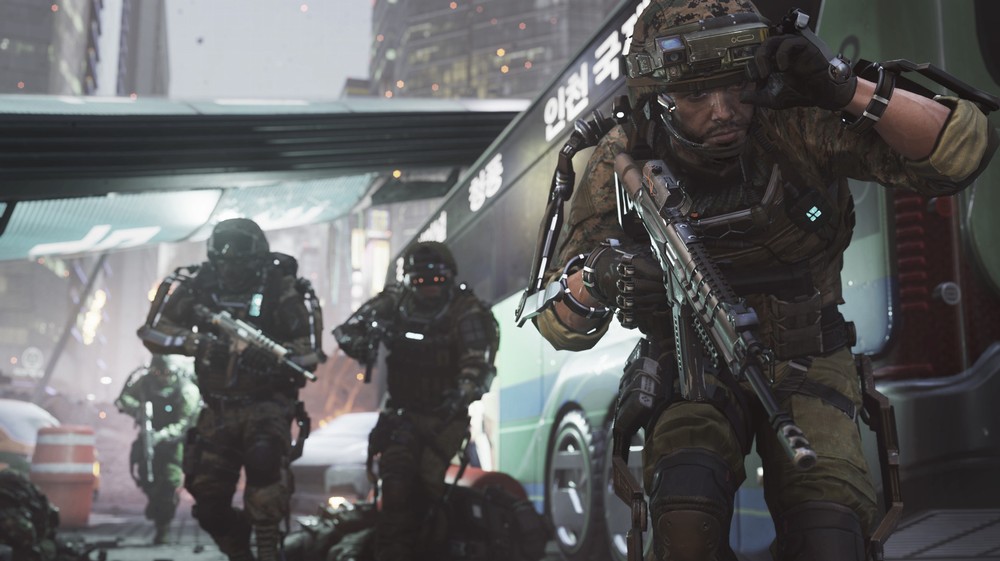 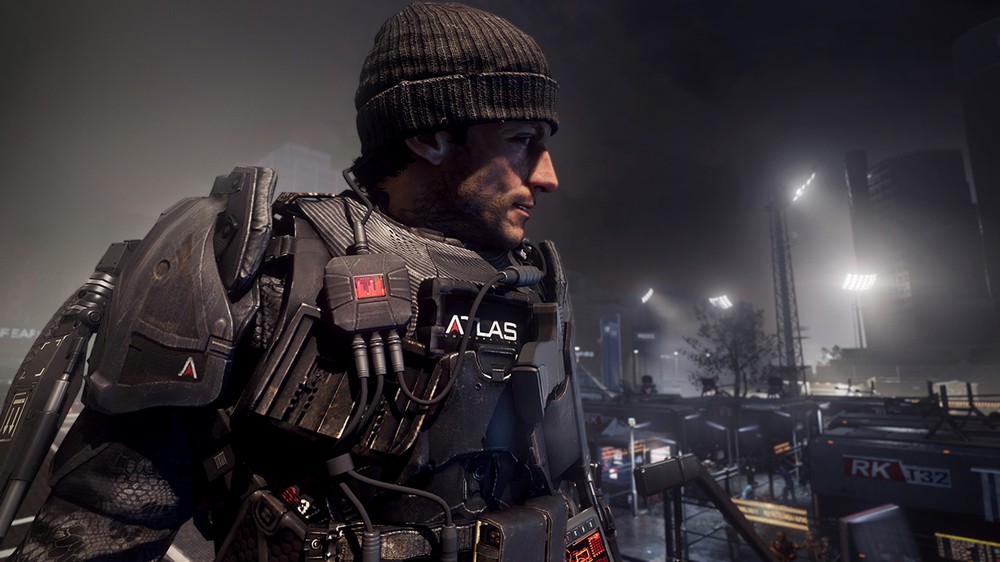 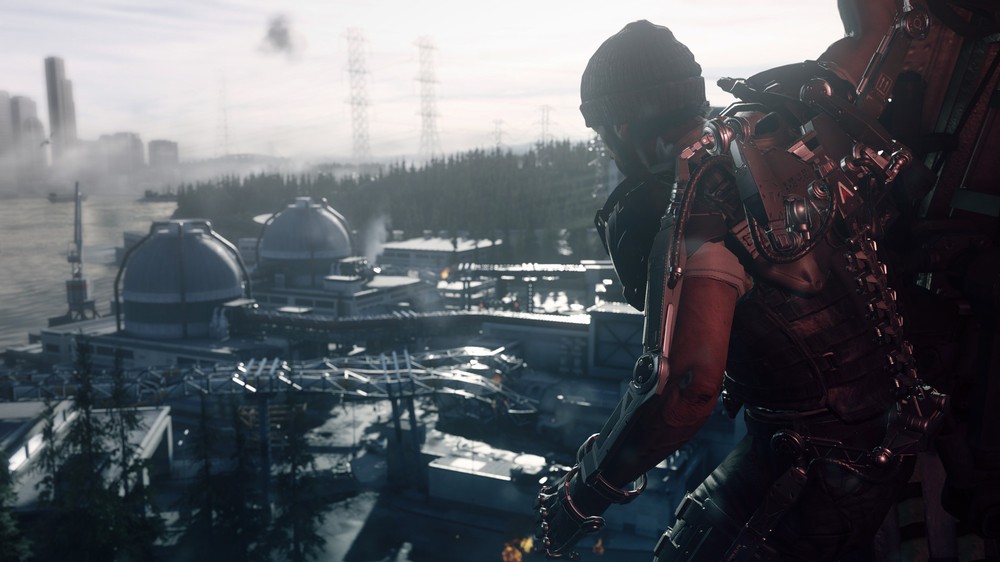 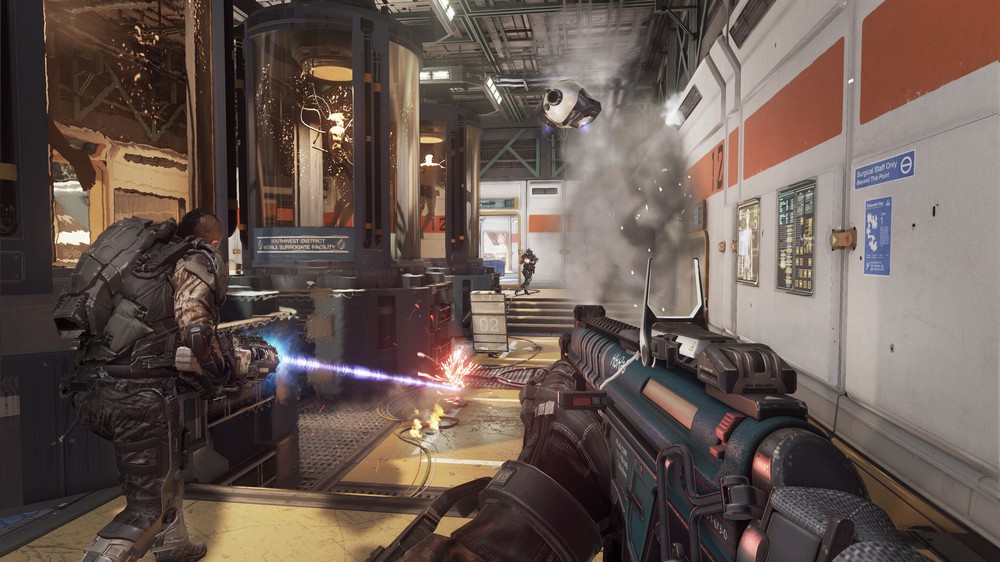 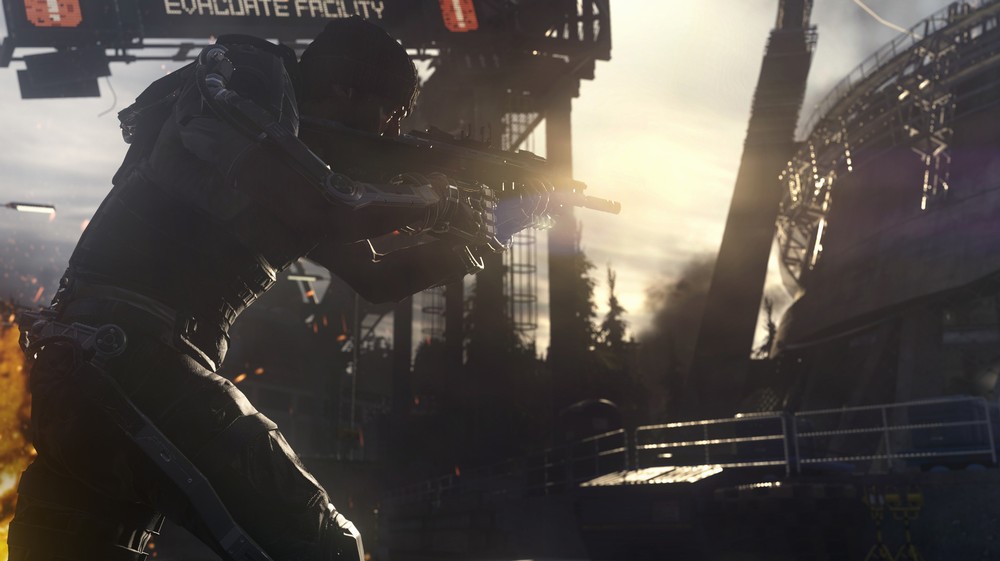 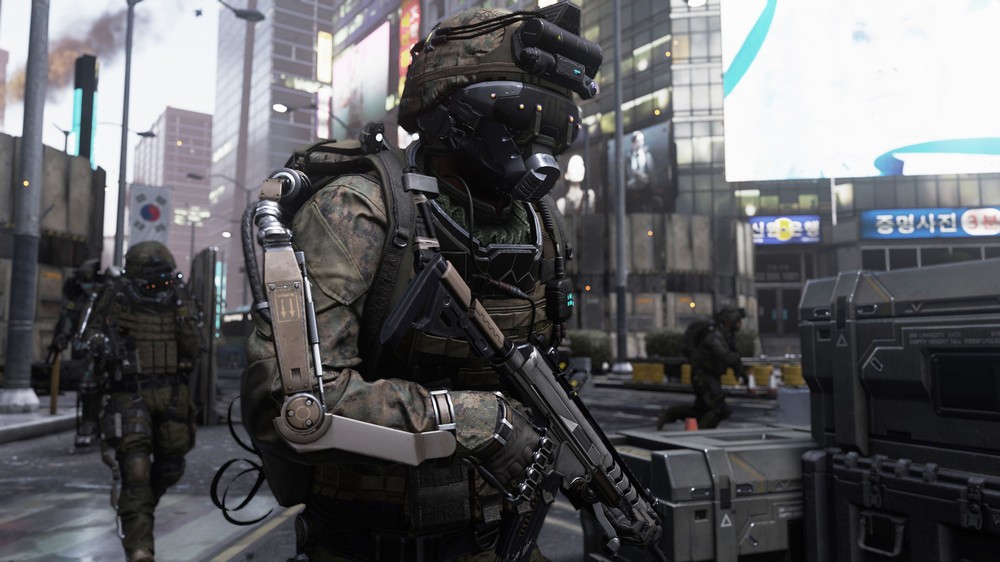 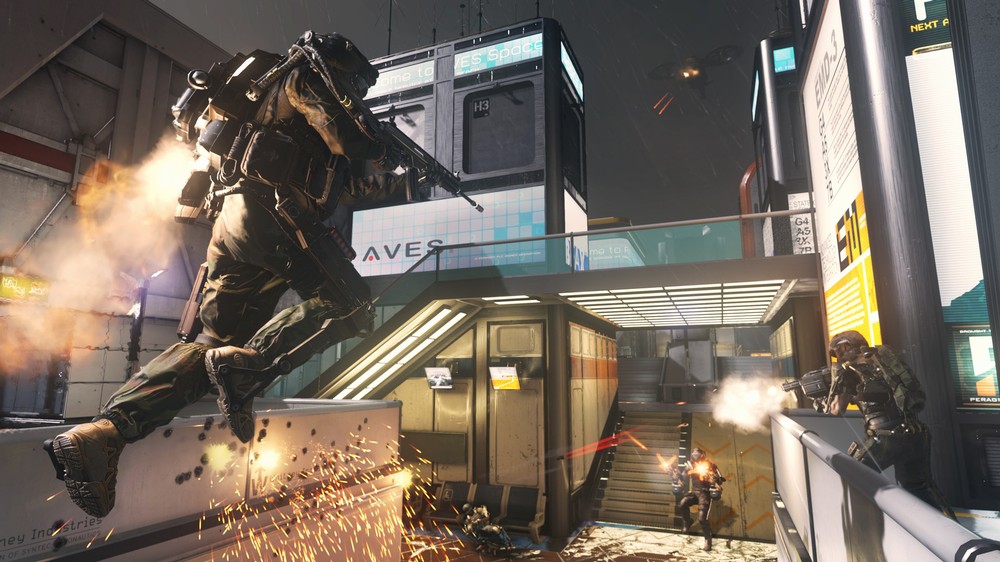 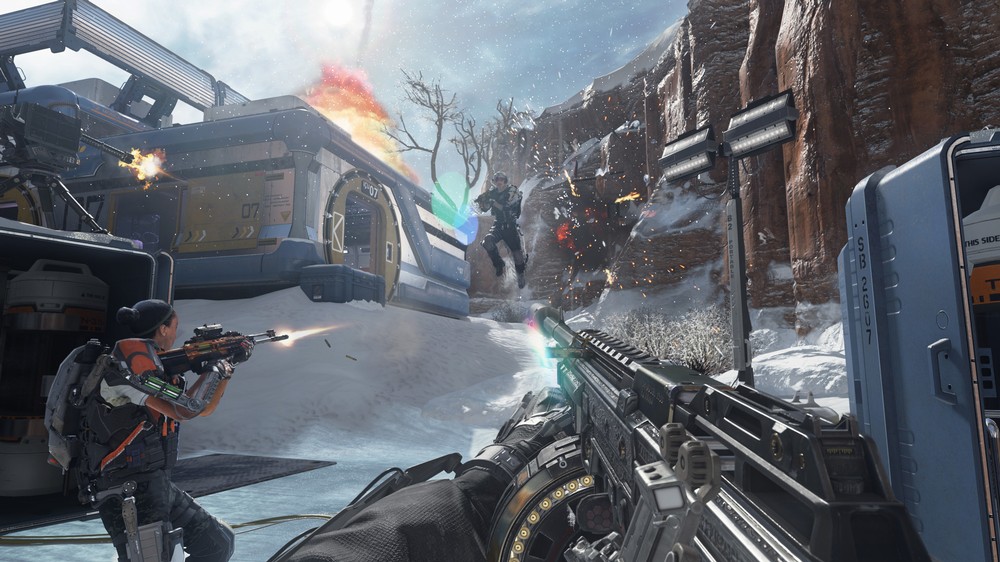 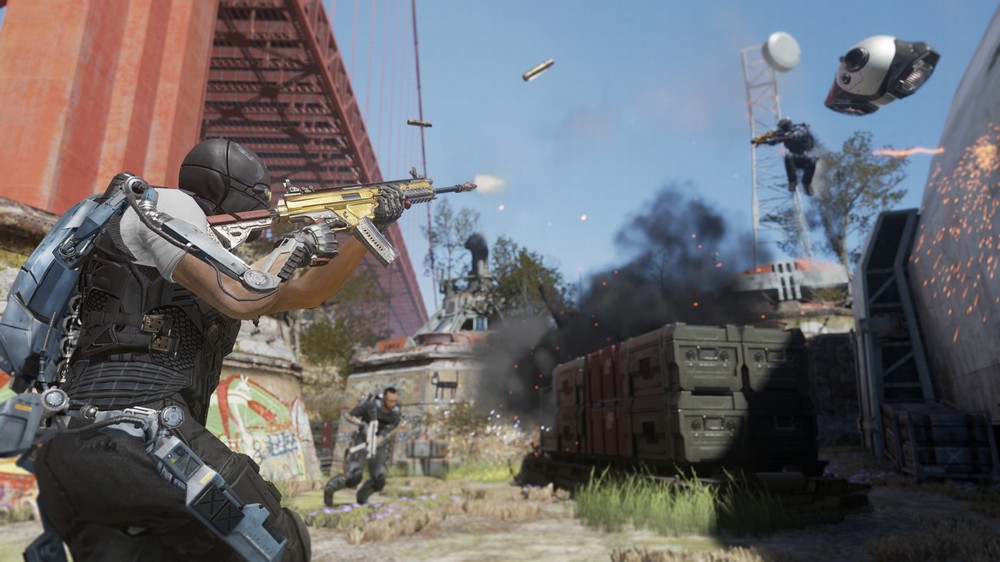 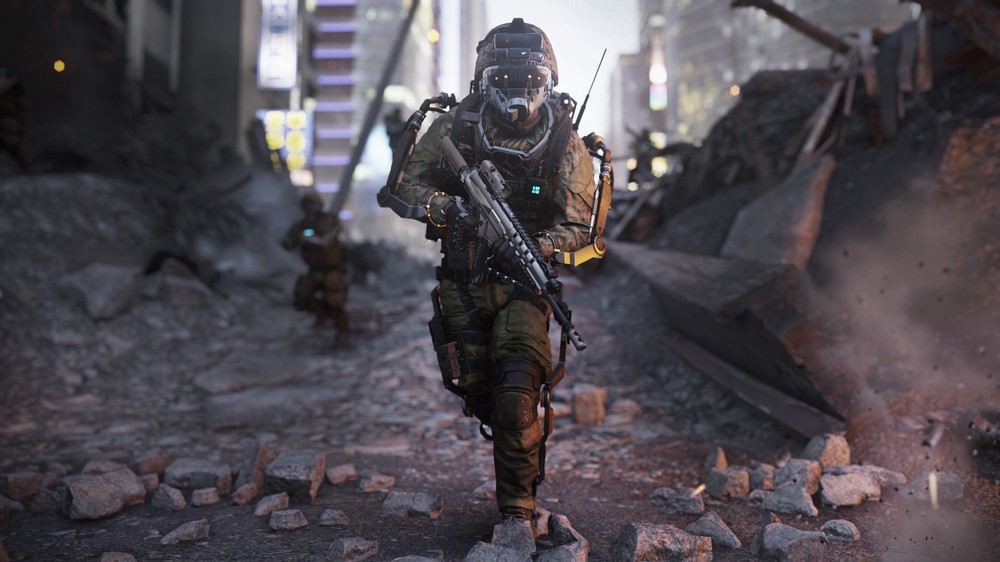