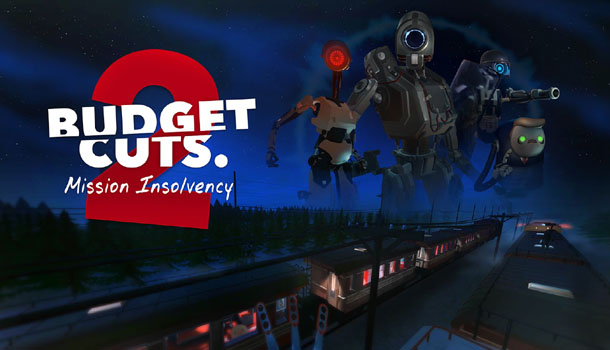 Seems more like DLC than a standalone sequel, but fun nonetheless.

As the title suggests, Budget Cuts 2: Mission Insolvency is the follow-up sequel to last years’ Budget Cuts, which I did not play so I was fairly surprised by just about everything this game had to offer from gameplay style to interface, graphics, and especially humor. The sequel picks up mere moments where the original ended (so I’m told), and given the 3-4 hour playtime for this game I would think it more fitting as a DLC rather than a standalone $30 installment. Even so, Budget Cuts 2: Mission Insolvency is presented as a standalone story with no knowledge of the first required. I suppose there are good reasons why I’m the only human in a world where robots are trying to kill me pretty much on sight. Maybe those TV news broadcasts have the answer. 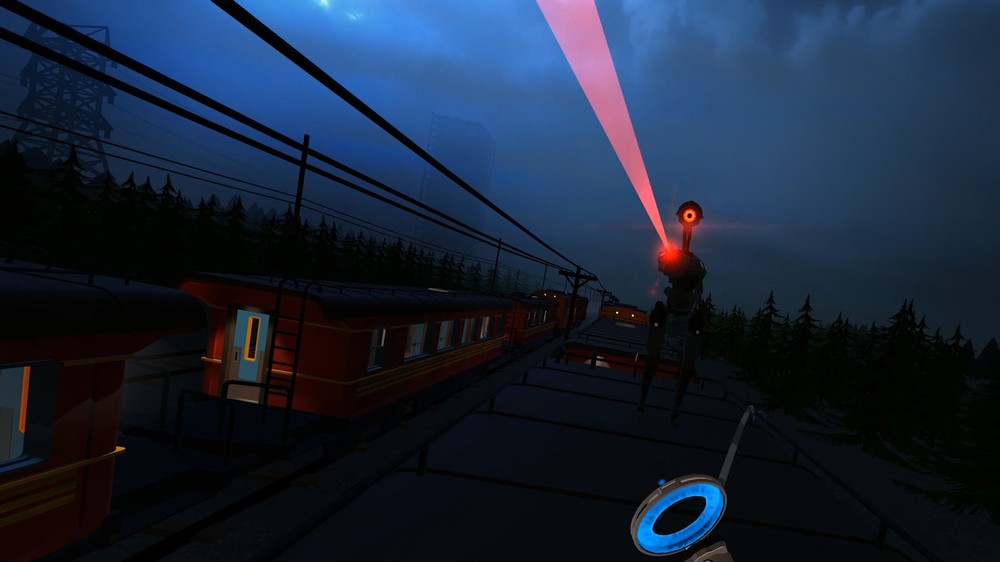 The game opens up with a rather exciting action sequence with you at the back of a runaway train loaded with enemy robots that stand between you and the engine that also happens to have a bomb ready to go off. The game provides adequate instructions on how to use the movement device; a gun that shoots a teleport pebble to wherever you aim it – you can even bounce it off the environment – and then you get a moment to preview your destination and even change your facing direction before you warp to that spot. I typically despise teleport movement in VR, but in this case they actually made it part of the gameplay rather than a crutch to avoid motion sickness. You can even use it to strategically avoid incoming attacks if you get the timing right.

Budget Cuts 2: Mission Insolvency is very interactive, allowing you to open doors, eat lots of tacos, and play with various items; some of which you can collect and store for use later on. Of course the big ironic hook is that all the robots – and we’re talking clumsy idiotic robots like the battle droids from Phantom Menace – all have laser weapons that will one-shot kill you while you are left to fight back with throwing knives, scissors, darts, and the random coffee cup. Thankfully, these droids are as fragile as they are stupid and they general go down with a solid hit from a sharpened object along with some gratuitous oil/blood spurting all over the walls and floor as the robots lament their failure. Even so, combat can be a bit wonky at times. Often, I would be a point-blank range doing my best impersonation of Norman Bates with a pair of scissors and my weapon would simply pass through the robot. There are definitely issues with hit detection in this game. Later, when you find the bow there are also issues with reliable aiming that will force you to get a lot closer to enemies than you really should to guarantee a hit. 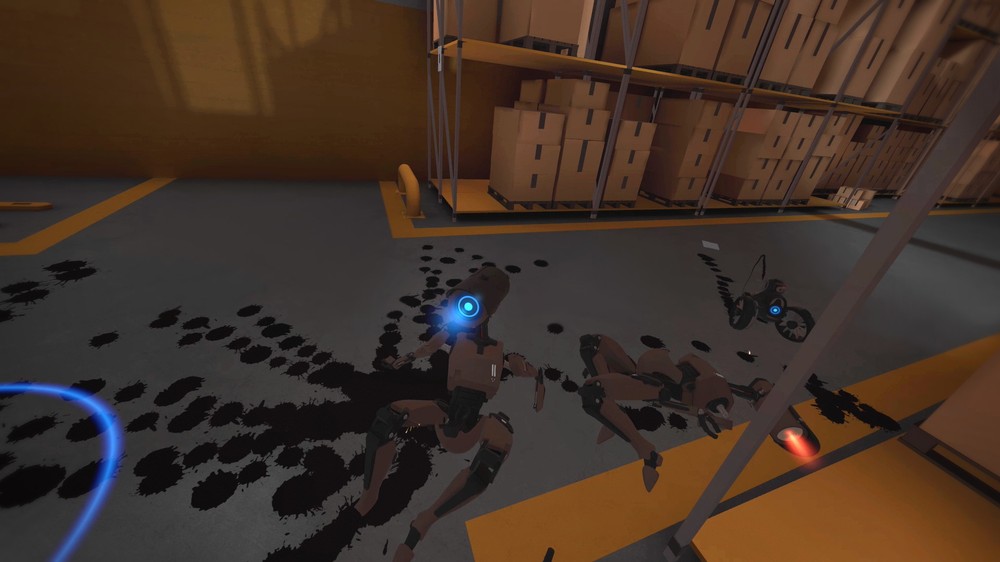 The game does a poor job of explaining a lot of the gadgets on your left hand. There is this cool viewfinder that reveals enemies through walls and objects but it’s never explained. Controls are clunky. It’s easy to drop/un-equip the movement gun, making it hard to escape and easier to die during the confusion of combat. Throwing things is extremely unreliable whether it is a dart, knife, or grenade. Even trying to take items out of inventory can be tricky, and I would often grab a knife or scissors and be holding it opposite of how I needed it.

The game isn’t terribly difficult other than the combat, and that’s mostly due to unreliable controls. It’s easy to figure out where to go and how to get there and there are often multiple solutions for any given problem. The levels are quite large and interesting to explore with fun secrets and collectibles scattered about. There was definitely a Stanley Parable vibe I was getting from the overall design; especially in the office section. The game also rewards your exploration with frequent refills on ammo and other melee items, but the game still favors stealth over the direct approach. The checkpoints are nicely laid out so you won’t replay too much if you die…and you will die…a LOT. 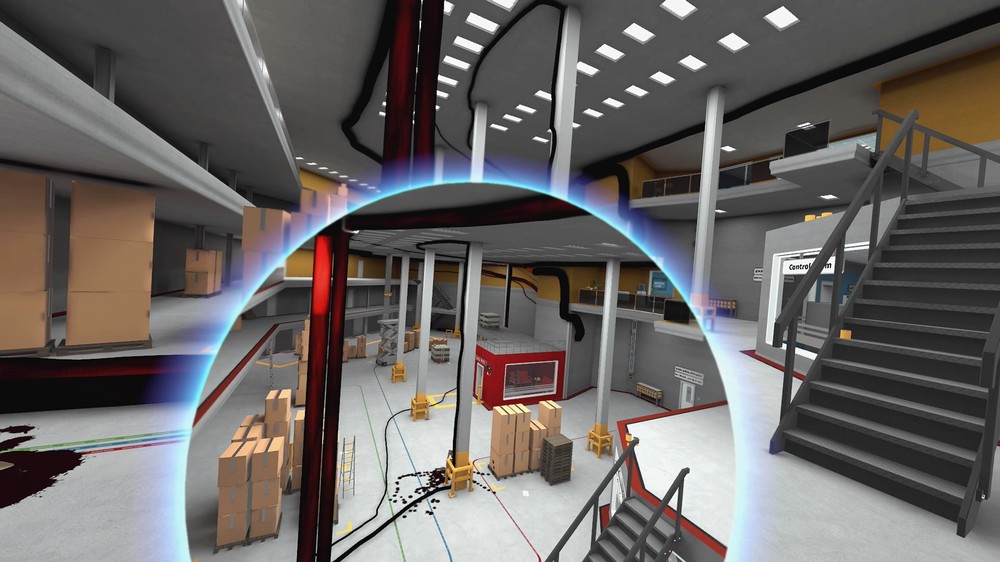 Presentation on the Rift S was excellent with a great visual style that maintained the perfect balance of quality and detail while keeping the framerate smooth and comfortable. With the nodal movement system the game does rely more heavily on room-scale and your ability to move within the scene to interact with items and engage in combat. It works great for stealth gameplay like teleporting to the edge of a doorway, opening the door, and then leaning out to peek inside or even around corners. The audio is also quite good, both in quality and humorous content; especially from dying droids as they twitch and “bleed out”.

It’s tough to recommend this as a $30 game. As of this review you can get a bundle on Steam that has both games for $34; a much better value than the regular $60. I can’t speak to the length and quality of the first game but personally, Budget Cuts 2: Mission Insolvency isn’t worth more than $20. There is definitely some fun to be had and genuine humor integrated into the gameplay that will make you laugh, but there are also lots of quirky control and frustrating gameplay issues you’ll have to tolerate to see this through to the end. 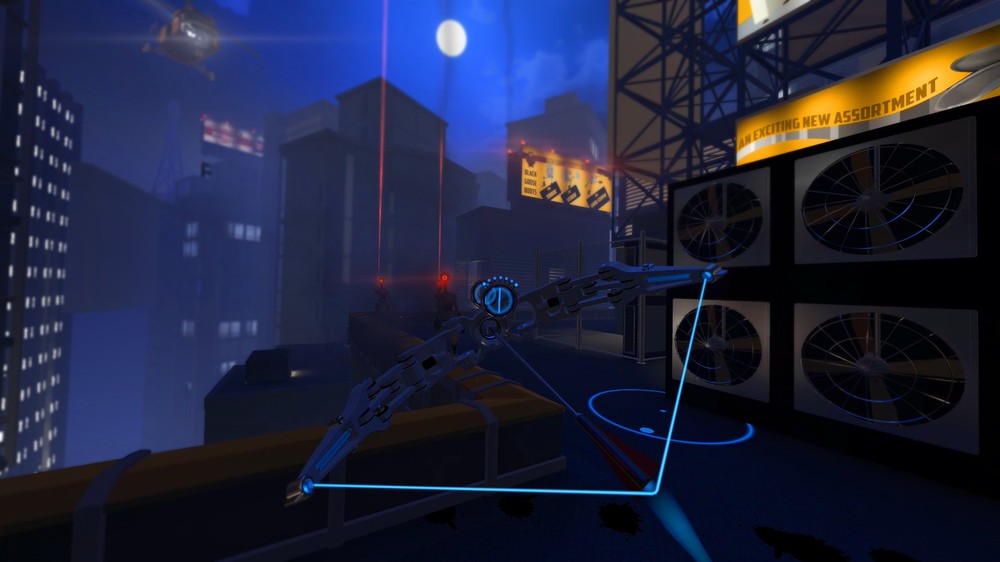