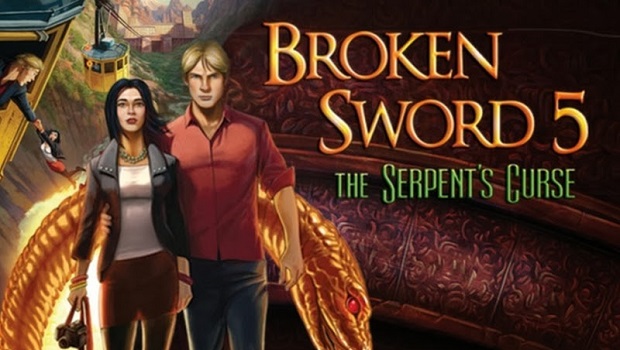 Excellent story, top-shelf production, and an authentic sense of humor

A wonderfully nostalgic point and click adventure on the PS4.

Point-and-Click adventure games have been making rather impressive resurgence in recent years, thanks in no small part to the overwhelming popularity of mobile tablets and phones. These touchscreen devices have helped move the largely mouse-and-keyboard designed gameplay off of the desktop and onto the couch. The result of this shift is that that the point-and-click genre is garnering a lot of attention from gamers and developers alike.

What some might not realize, however, is that the point-and-click genre has already spent a fair bit of time in the living room. Nearly two decades ago on the original PlayStation, gamers enjoyed classic point-and-click adventures Clock Tower, Discworld, Blazing Dragons, and many more. But by far the most popular PlayStation era point-and-click franchise Revolution Software’s highly acclaimed Broken Sword series.

Chronicling the adventures of American George Stobbart and his French love interest Nicole Collard (also know as Nico), the Broken Sword series has taken our hero on an international tour of mystery through Europe and the United Kingdom, the Middle East and Africa, Central and South America. Much like the adventures of Indiana Jones or National Treasure’s Ben Gates, George finds himself in a sordid web of illuminati lore; the Knights Templar, the Mayans, the Egyptians, and every other conspiratorial group you can think of, always looking to solve some mystery that seems to find its way into his vacations. 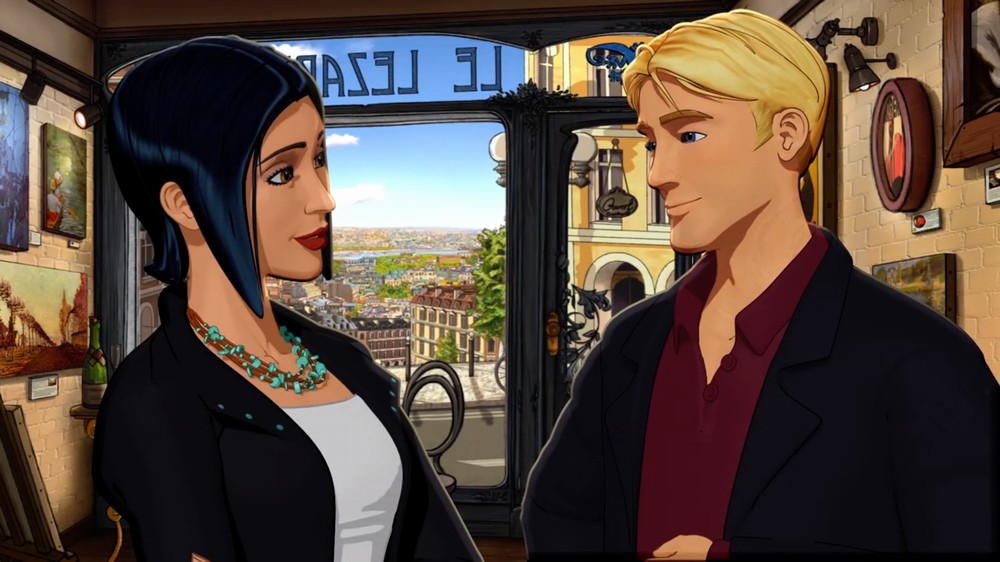 Throughout the early 2000’s the Broken Sword series had a less than graceful run on the PS2 and PC, attempting to take the 2D point-and-click into a 3D adventure. Fans were not impressed with George’s new perspective, and longed for a return to the original formula, and the franchise went into an extended hibernation period.

In 2012, after repeated pleas from fans, Revolution Software announced a Kickstarter project for a new Broken Sword title. The Kickstarter pulled in double its requested $400,000, paving the way for Broken Sword 5: The Serpent’s Curse. Originally released in late 2013 on the PC, The Serpent’s Curse was ported in early 2014 to iOS and Android, and in 2015 it was optimized for console release on the PS4 (and Xbox One). 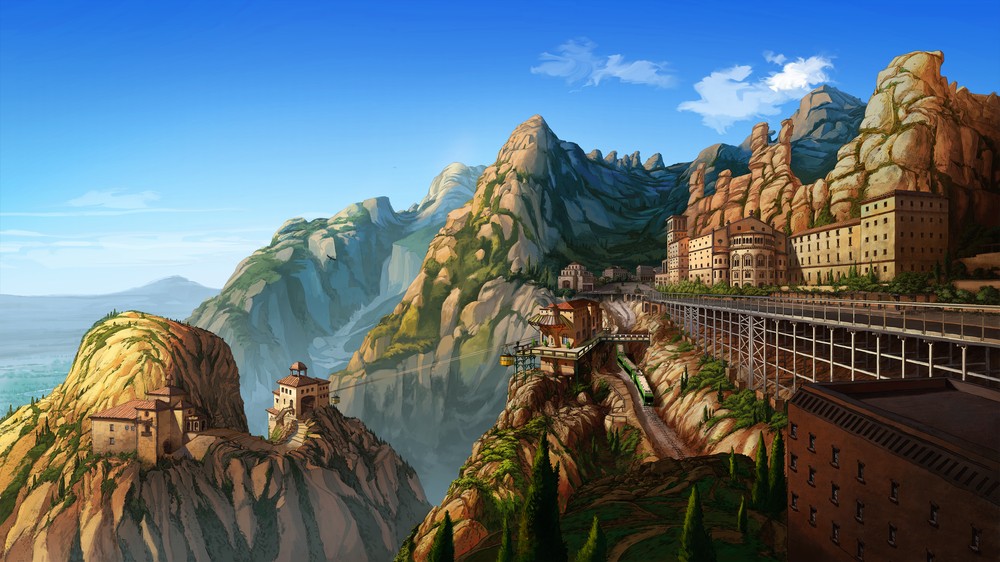 Broken Sword 5: The Serpent’s Curse begins with a short cinematic taking place in WWII-era Spain, in which a rich landowner’s mansion is overrun by what appears to be a fascist military squad. In the ensuing gunfight, the owner is seen rolling up a very eerie and ethereal painting. Momentarily after, the land owner is killed, and the painting is confiscated by the invading troops.

The story then jumps to modern day Paris, in which our hero George Stobbart has just run into his long-lost love interest Nico at a local art exhibition. This time, George isn’t in Paris on vacation, he is actually in the gallery doing business in his new position as an agent for a fine art insurance company. Suddenly, an armed (and helmeted) robber barges into the gallery and takes a painting – the very same painting shown in the initial WWII cutscene. During the thief’s escape, he shoots the gallery owner dead, leaving George with a double whammy of insurance woe.

It is implied that the painting in question, la Maledicció, may have supernatural ties to evil, and that the gallery owners death is only a precursor to much greater suffering. No surprise, George and Nico feel inclined to solve the murder/robbery, and with that the adventure begins. Gamers will get to travel with the characters through Europe, in search of the solution to the mystery at hand. 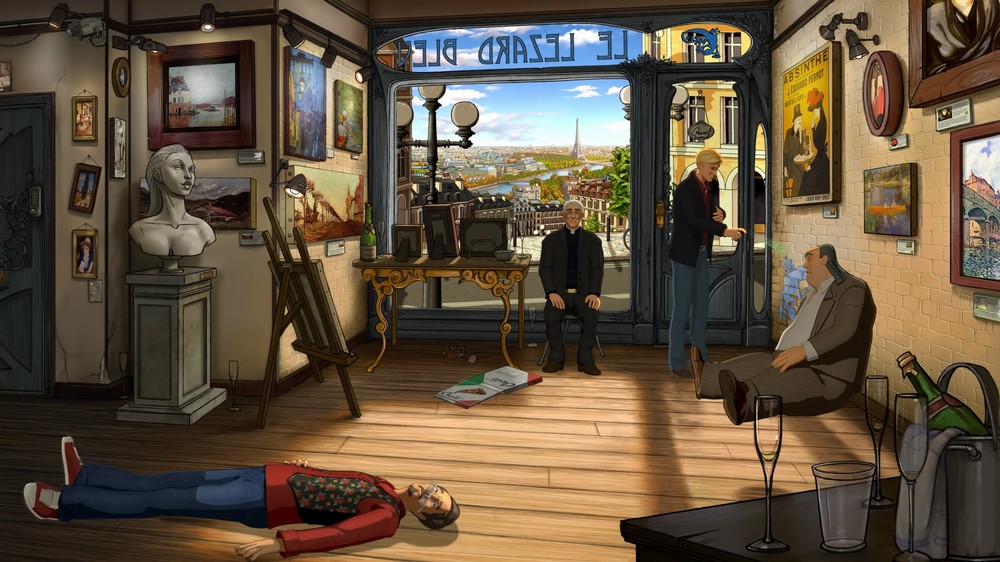 As I have mentioned ad nauseam, The Serpent’s Curse is an old-school point and click adventure. This means that all actions for movement and investigation revolve around the positioning of an on-screen cursor. While this can be tricky to effectively translate to a console controller, Revolution has done a fabulous job integrating the DualShock 4 into a near-seamless control mechanic – gamers can use an optimized analog stick and face button scheme, or they can opt for touch pad control. Both methods work surprisingly well.

Each scene is scattered with clues which the gamer must examine and collect. Nearly everything has a purpose to progress the storyline. Maybe it’s a piece of pizza, or a paperclip, or a bottle of whiskey – whatever it is, it’s best to pick it up. Where to use these items? Well, figuring that out is where the real challenge lies. The Broken Sword franchise is famed for its challenging puzzles and The Serpent’s Curse is no slouch. In fact, more than once I had to resort to an online walkthrough in order to figure out some of the more difficult requirements.

In terms of presentation – The Serpent’s Curse is one fantastically nostalgic package. Once again, George Stobbart is voiced by Rolf Saxon – the very same voice actor who has played George since the inception of the series in the mid 1990’s. George is a goofball – a goofball who stumbles his way into all sorts of (un)fortunate situations. His dialog is always delivered with a twang of ridiculous ignorance than only Rolf Saxon could provide. It’s like when you run into an old friend after a decade apart, and it seems like old times – George (and Rolf) are that goofy old friend. 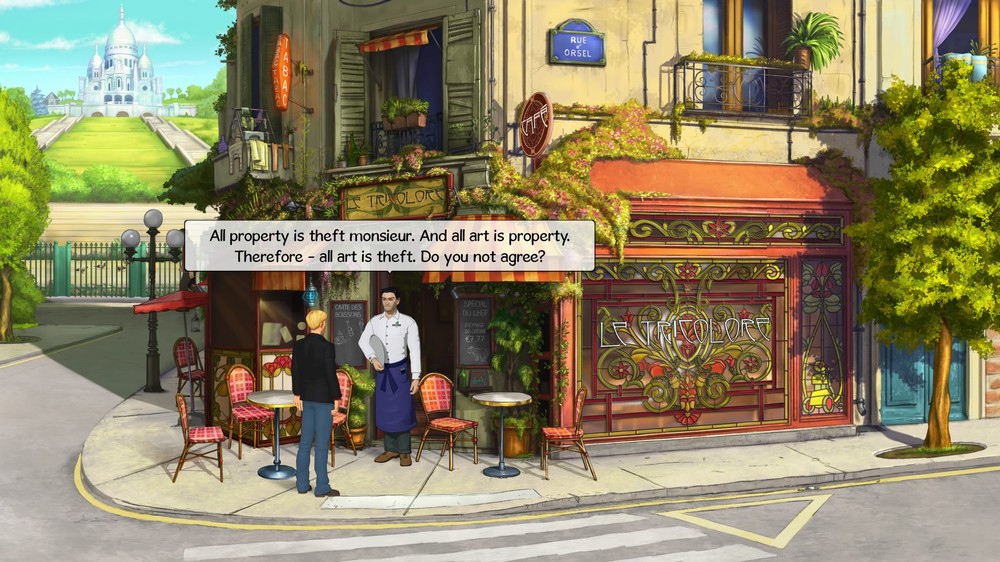 None of the remaining voices are delivered by their original actors, but they do not lack in authenticity or professionalism. Regardless of the character, all share the same odd (and annoying) momentary hesitation that precedes each line of dialog. This is especially off putting when accidentally initiating a repeat conversation with a particular character and having to sit through the aggravating pause a second, or often third, time.

Visually, The Serpent’s Curse is a gorgeous 2.5D adventure. The character models may not be hand drawn this time around – but what is here looks fantastic, with a sense of depth and dimension within Broken Sword’s trademark cel shaded universe. The backgrounds are absolutely stunning, and feature a ridiculous amount of detail.

I will say that there are times it is not entirely clear which is the correct (or should I say most efficient?) pathway to get from one destination to another with the way the levels are laid out, nor is it always easy to spot some of the smaller objects – but the game is quite forgiving in its ability to seemingly intuit the gamers intent, and in subtly suggesting

Broken Sword 5: The Serpent’s Curse was originally sold on the PC as two episodic releases. The PS4 version includes both episodes packed in with an MSRP of $25. This is an absolute steal for fans of the original series, and should be well received by the Telltale fans (The Walking Dead, Game of Thrones, etc.). It’s definitely worth a look at least, just to get a glimpse into the crazy world of George Stobbart. 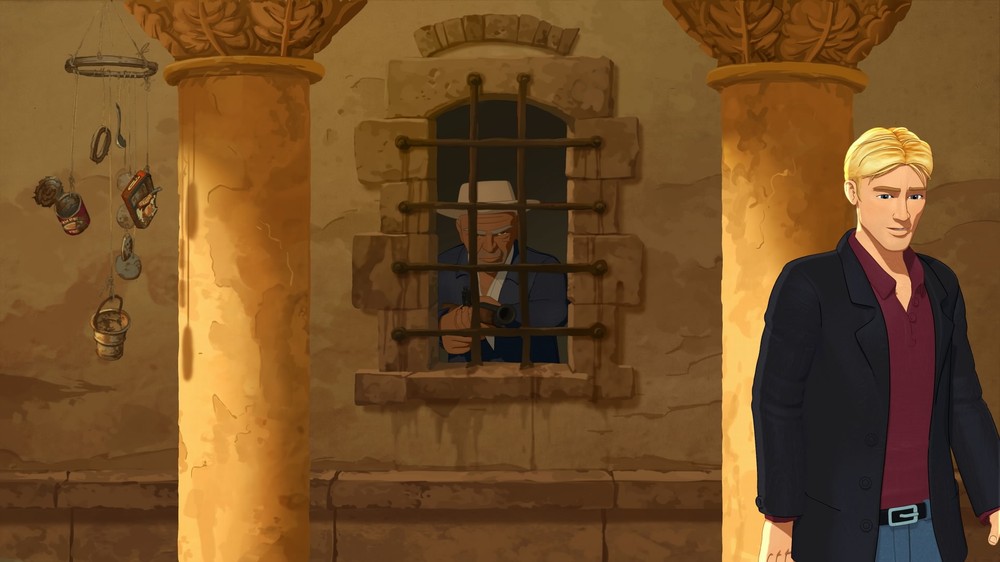 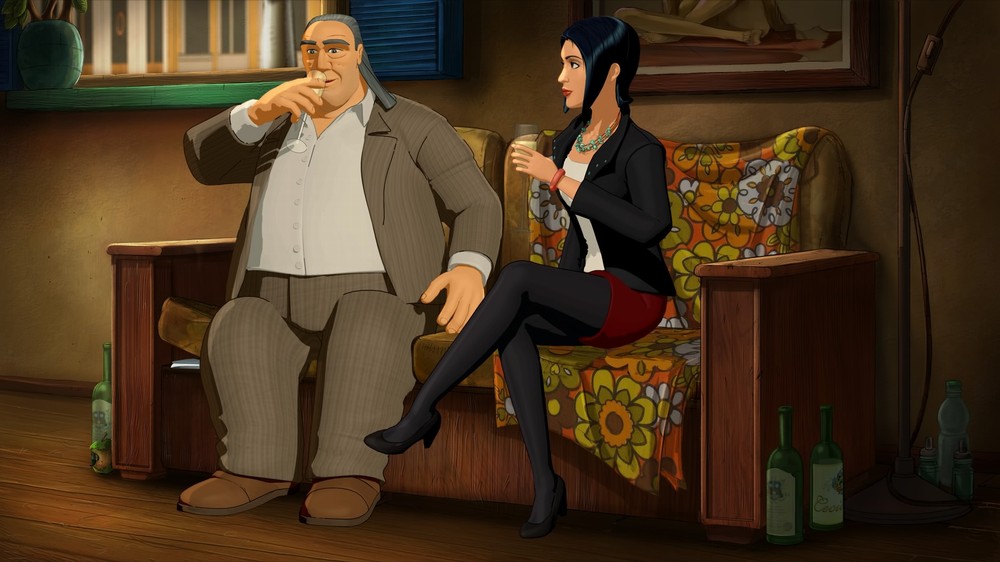 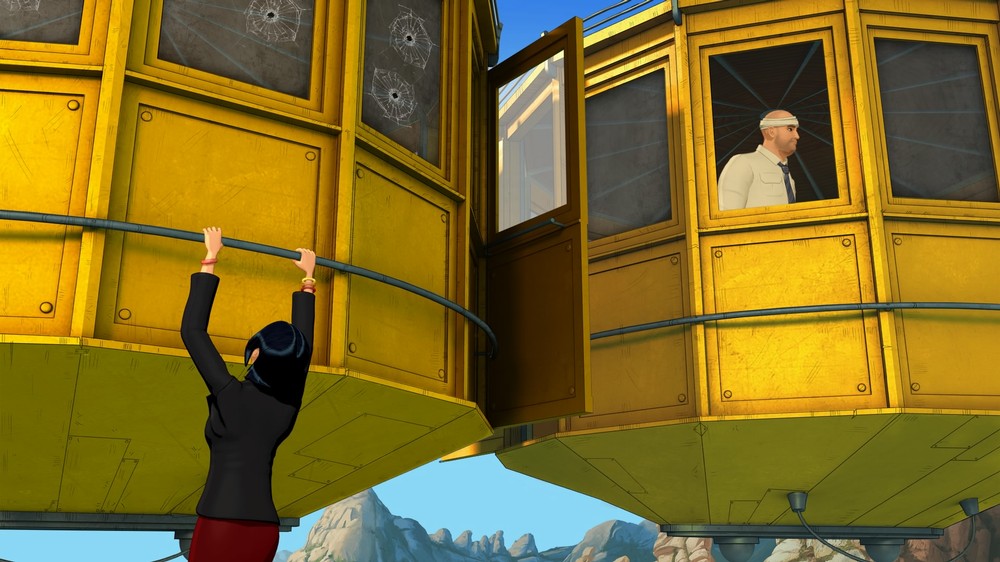 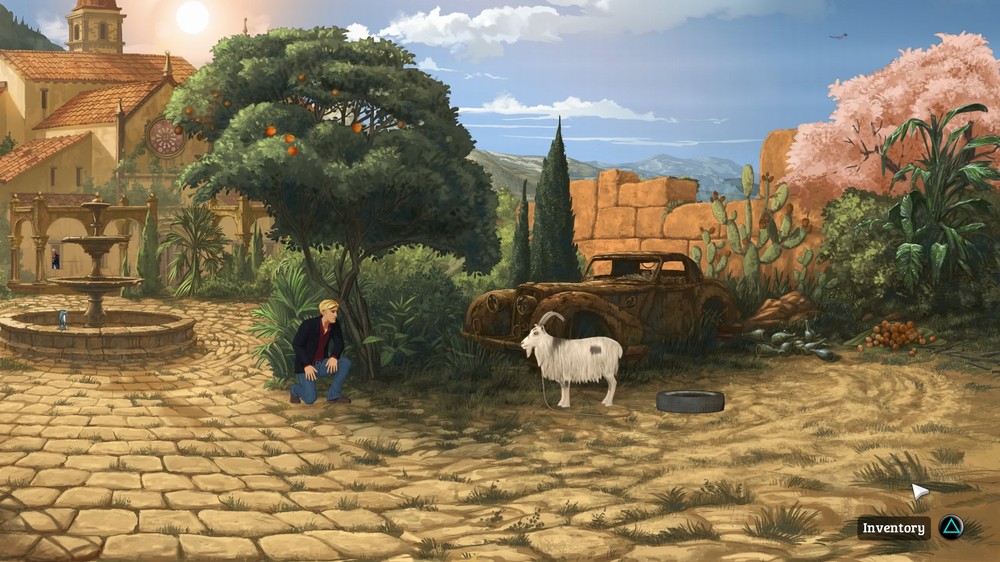