SIZZLIN'
TOP 10
1
877
The Walking Dead: Saints & Sinners Review – Oculus Quest
2
749
Frictional Games Shows Off First Gameplay Footage of Amnesia: Rebirth
3
749
Join the Galaxy’s Finest as Star Wars™: Squadrons Soars Into Homes Today
4
749
CRASH BANDICOOT 4: IT’S ABOUT TIME IS AVAILABLE NOW
5
748
The Falconeer First-Look Preview – PC
6
748
Metamorphosis is 33% Off on Steam!
7
748
Werewolf: The Apocalypse – Heart of the Forest launches on October the 13th
8
748
Synth Riders Celebrates Anniversary with a Month Full of Treats and an Oculus Ques...
9
748
Worm Jazz Review – PC
10
748
Take to the Skies and Choose a Side in the New Trailer for Next Generation Air Com...
Video Games
Shining Star 2242 views 9 likes 0 comments
Posted May 27, 2019 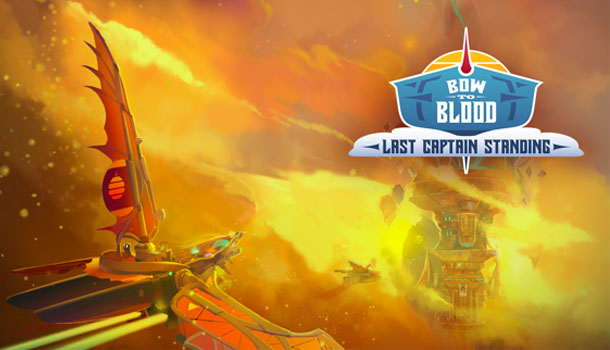 Bow to Blood: Last Captain Standing is truly one of the most interesting and original titles I’ve played in VR in quite some time. Borrowing and blending arcade ship combat ideas from Assassin’s Creed with the tactical mechanics of Star Trek Bridge Crew then tossing in some Borderlands-style graphics, you really do get something special. I probably could have done without the overlying reality game show premise, but even that thin narrative layer offer a bit of entertainment value.

The basic setup is that you are captain of your own flying sky barge – not unlike Jabba the Hutt’s – where you operate all the major flight controls, weapons, and defenses of the ship with the aid of two AI-controlled crew members that you can assign to any of four control stations on the deck. These stations include Shields, Engines, Sensors, and Drone controls, and having a person actually operating these will give you additional boosts for that aspect of gameplay. So if you are in a non-combat exploration mode you would want someone on Sensors to help find hidden loot, or if you need to make a quick escape, having a guy on Engines will let you overdrive the engines for extra speed. Switching assignments is as easy as pointing to a station and a crew member. 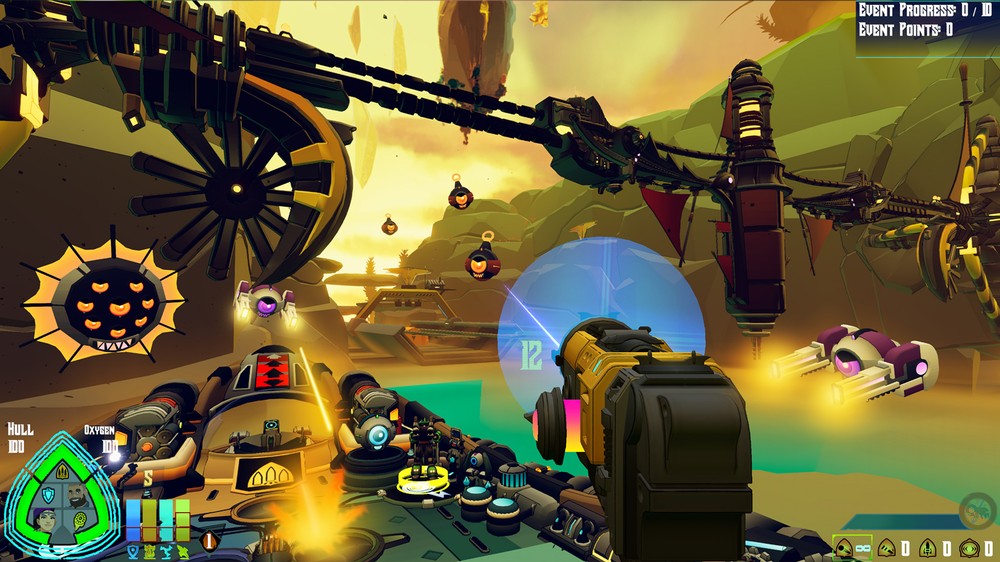 From your command chair you have access to the main guns, mining lasers, and a nifty control panel where you can switch around power modules to customize your ship’s abilities to the situation or your playstyle. There is even a sidearm you can remove from its holster to defend against enemy drones and boarding parties. You’ll also be in direct control of steering the ship, which moves with a sluggishness that mirrors commanding a large naval vessel, but you do need to keep moving to avoid enemy locks as well as positioning your ship for effective weapon use such as the powerful cannons running down each side of the ship.

Bow to Blood consists of seven dynamically generated events that will keep things fresh each time you play the game. There is a mix of arena battles interspersed with exploration areas where you can mine for resources, seek out treasure and engage in more casual combat. The slow moving nature of your large ship keeps things from getting too crazy making this a comfortable fit for VR, although I suspect this game would be just as much fun without it. I did enjoy the added level of immersion in being able to quickly look about and target enemies separately from ship movement.   The simple yet charming Borderlands-style graphics kept the graphics crisp and the framerate smooth throughout. Controls were simple and perfectly suited for the Oculus Touch. 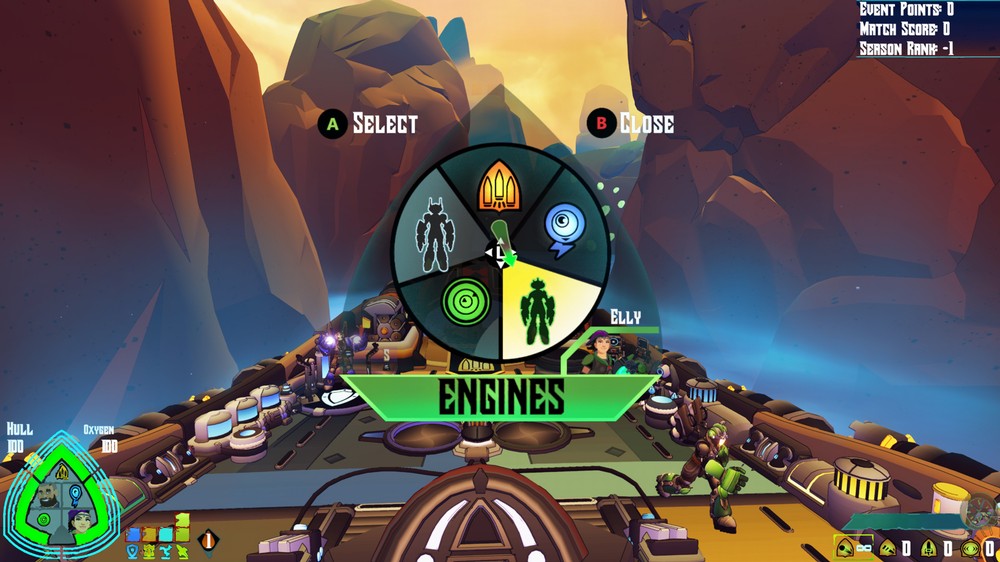 There was a surprising layer of strategy to the game made possible through some micromanagement systems; mostly assigning your two crewmates to effective stations but also in swapping around those power modules while maintaining a watchful eye on your ship’s shields and armor plating levels. Perhaps the most effective tactical element were the social relationships you build with the NPC opponents in the game. It’s just like Survivor where you build alliances with other players and hope they don’t betray you in the end. In the non-arena parts of the game you will often be put in situations to offer aid to another NPC. This can build favor with them but potentially lose favor with others. There is this whole underlying balancing act of diplomacy that carries over to the arena matches where the two lowest scoring players get voted off by the rest of the group. This relationship dynamic with the rest of the players is perfectly integrated into what would otherwise have been a simple ship combat game. It also makes you consider each and every interaction you have and the potential outcomes later in the game.

I had hours of fun with Bow to Blood: Last Captain Standing, and since every game is randomly created it’s easy to keep coming back for more. While my review was based purely on the Oculus Rift store version, the game is also available on Steam for added Vive support and there is also a PSVR version as well. If you are looking for something truly original then Bow to Blood has that perfect mix of arcade, strategy, and VR immersion that sets it apart from anything I’ve played in VR this year. Definitely worth a look. 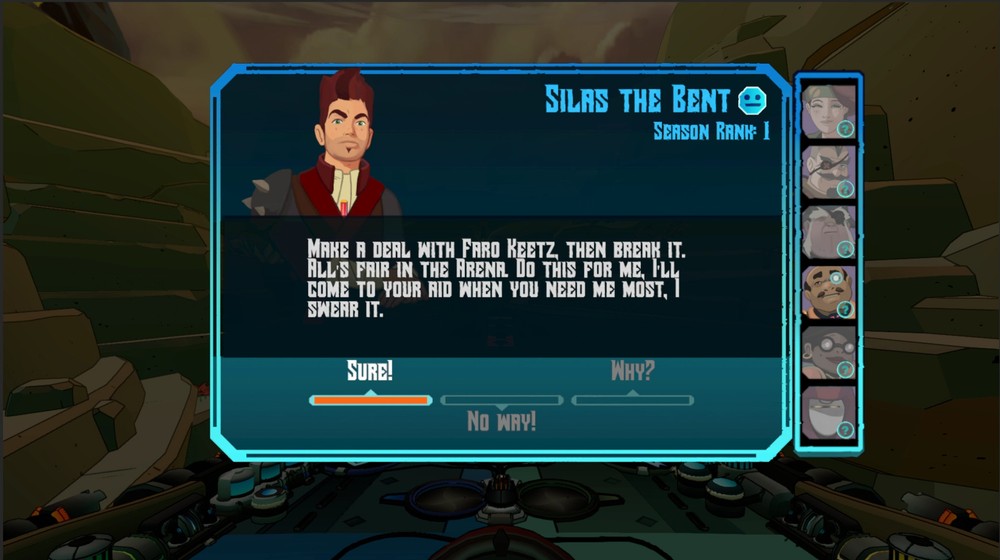 1
877
The Walking Dead: Saints & Sinners Review – Oculus Quest
2
749
Frictional Games Shows Off First Gameplay Footage of Amnesia: Rebirth
3
749
Join the Galaxy’s Finest as Star Wars™: Squadrons Soars Into Homes Today
4
749
CRASH BANDICOOT 4: IT’S ABOUT TIME IS AVAILABLE NOW
5
748
The Falconeer First-Look Preview – PC
6
748
Metamorphosis is 33% Off on Steam!
7
748
Werewolf: The Apocalypse – Heart of the Forest launches on October the 13th
8
748
Synth Riders Celebrates Anniversary with a Month Full of Treats and an Oculus Ques...
9
748
Worm Jazz Review – PC
10
748
Take to the Skies and Choose a Side in the New Trailer for Next Generation Air Com...
All Original Content on Game Chronicles is Copyright (c) 2002-2020
Sinjin Solves Walkthroughs Copyright (c) 1996-2020 by Mark Smith