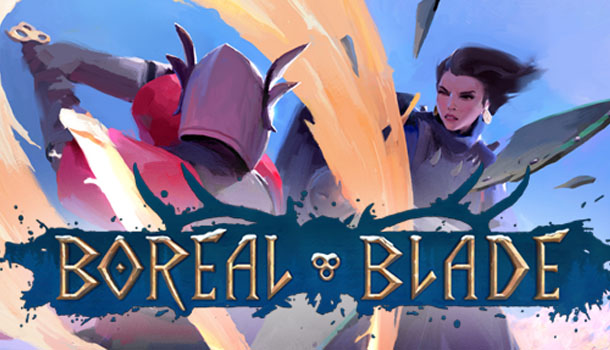 + Combat system is interesting
+ Multiple arenas to choose from

Fun if you have the time and patience to learn.

Boreal Blade for Nintendo Switch is a team-based, melee fighting game developed by Frozenbyte, the creators of the highly successful Trine series and Starbase, a new space MMO in development. Boreal Blade released August 28th on the Switch eShop with a planned Steam release for 2019 as well. The major focus of Boreal Blade is not just swinging your sword but mastering your fighting style and ultimately creating your own with its ability to give you full directional control of your sword.

Instantly when I received Boreal Blade I thought I was getting For Honor for Nintendo Switch with its very similar gameplay mechanics and overall set up. I was about 70% right, as Boreal Blade looks nothing, sounds nothing and only plays somewhat like For Honor. Boreal Blade is a multiplayer team fighting game primarily using melee weapons such as swords and shields, spears, maces and if you really want to be a bad-ass, un-armed combat. Why anyone would ever choose unarmed when going up against guys with swords is beyond me. If you really want to get technical you can also fight with a broom stick but it basically plays like a spear. 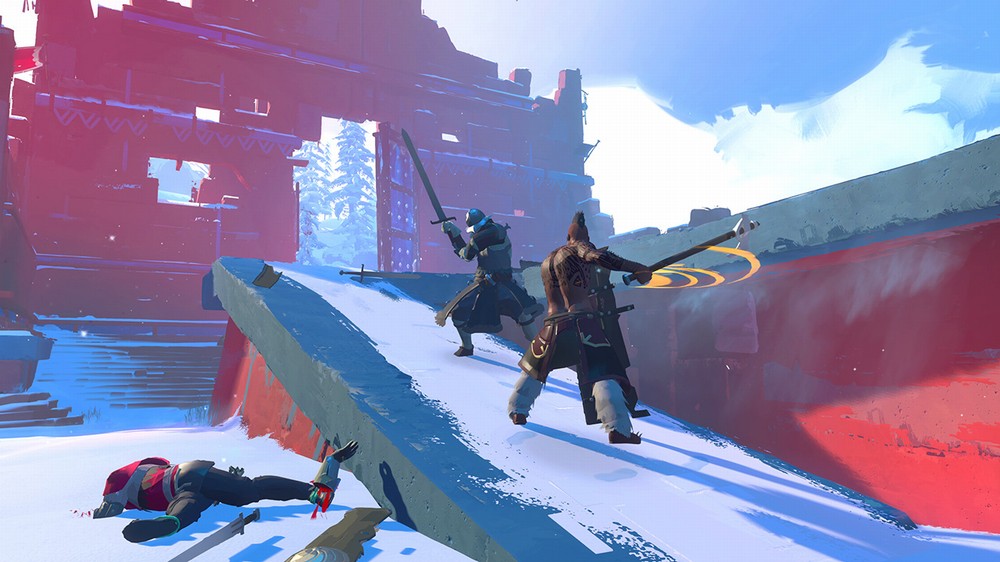 Boreal Blade stands out that while there are weapons in the game the real strategy is how you use them. A swing is fully controlled by you and has repercussions if you miss or time it wrong, so that side slash may have just left you completely open to counter attack by your opponent who decided to hold off just a little bit longer than you and moved his blade at the last second to his other hand and countered.

While I said how much like For Honor I expected this to be there are so many differences that Boreal Blade really does stand out on its own with simple things such as you being able to choose your armor class, and not being stuck with a specific weapon type just because you choose light armor doesn’t mean you have to be un-armed or use a spear. You can go full on broadsword or do heavy armor and do spear and one-handed sword and shield. It takes experimentation to find what works for you and that’s what makes it stand out; you aren’t stuck using a weapon and being given a penalty for it. 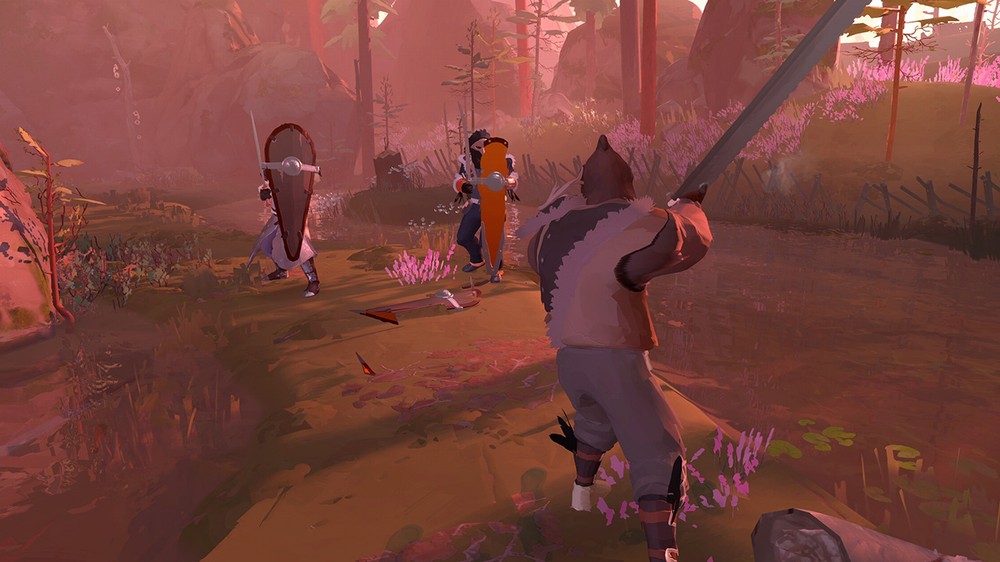 The major system that we keep talking about is the combat because it really is hard to master but also fun to play with. A good example is blocking. You don’t just hold a button to block, your character after you attack stays in the position that you swung in, he doesn’t just reset to a battle stance and you have to move your sword back. That’s where blocking comes in; the direction you are holding the sword, your stance as it were is what determines if you block an attack. It brings more depth to combat knowing that you HAVE to move your sword to where you think your opponents are going to strike from. It takes some getting used to but it’s very satisfying to pull off.

Attacking is also simple yet frustrating to master. You charge with ZR then slice with the directional thumbstick. Your ZR charge changes the color of blade from yellow to red for max charge. Hit detection seems buggy, attacks I think should hit don’t always but I attribute that more to lag and connectivity issues than the actual hit system. ZL moves the weapon, and you can move it in a circular motion to change the direction of attack. Moving the sword too far changes hands you are holding sword in and will cancel charge attacks. You can also pull off Feint attacks which make it seem like you are going to attack one way and then last-minute pull back and switch directions, its very hard to explain and really has to be experienced to appreciate. 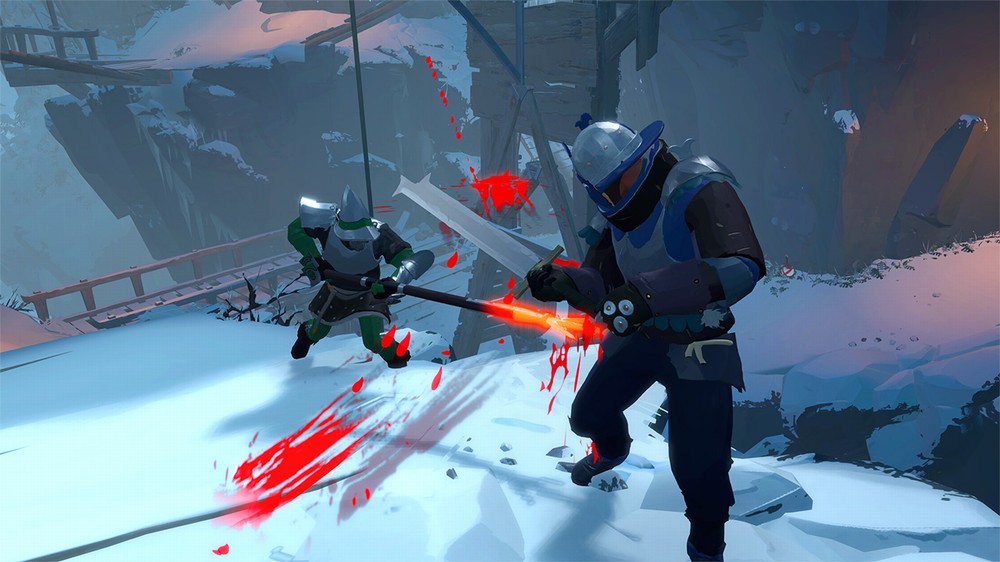 Visuals are interesting because I’ve played Trine and it is beautiful, the colors are vibrant and dazzling and Boreal Blade is very drab in comparison. I understand that those are two very different games but I just expected areas and avatars to look nicer, but its one of those things that it is what it is, the art style fits for what they were trying to accomplish, a game based more on combat versus looking shiny. Speaking of shiny, there are customization options you can use that while may not affect your stats such as armor and stamina, do allow you to stand out from the run of the mill smock-wearers you will be primarily fighting against.

Boreal Blade has no story mode, so get used to waiting for queues for an arena to start up. There are a total of five game modes with the basic team-deathmatch and deathmatch being the staple. You can also choose from Training hall where you can practice your moves and Boreal Battle where two teams fight against each other for total dominion. Surprisingly, they also include a 1v1 mode so that you can call out that dude that’s always spartan kicking you off the arena and show him what’s up when you are both solo. 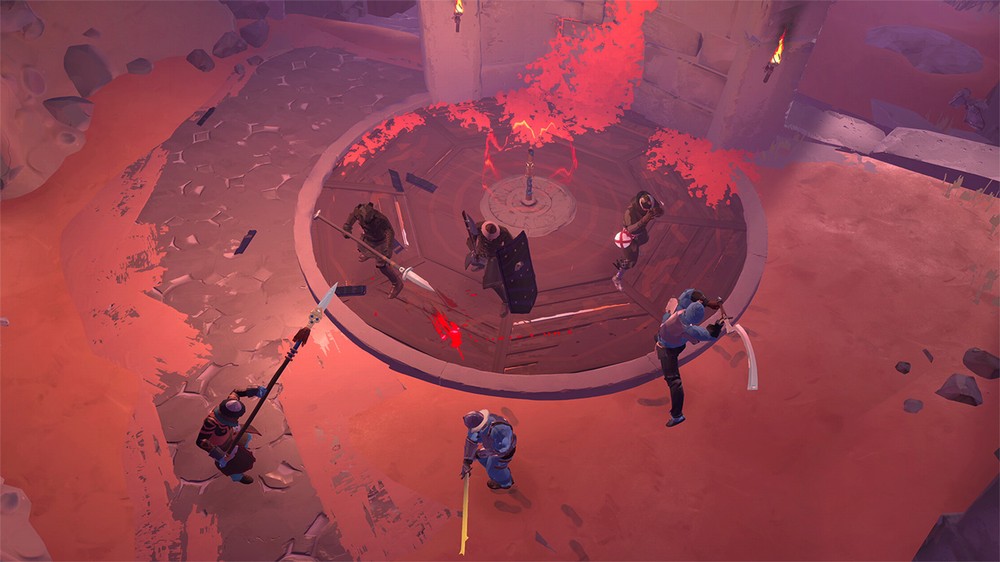 Boreal Blade is fun if you have the time and patience to learn, frustrating if you don’t, and downright rage-inducing if you get kicked from a battle. The biggest letdown has been connectivity where multiple disconnects causing lost XP really pushes the limit of how much time I would invest into this long-term. Before you buy, I recommend you download the demo, which allows you to carry over progress, and try before you buy. You will quickly learn if Boreal Blade is for you or not.

1
1088
The Walking Dead: Saints & Sinners Review – Oculus Quest
2
908
Take to the Skies and Choose a Side in the New Trailer for Next Generation Air Com...
3
908
CRASH BANDICOOT 4: IT’S ABOUT TIME IS AVAILABLE NOW
4
907
Frictional Games Shows Off First Gameplay Footage of Amnesia: Rebirth
5
907
Join the Galaxy’s Finest as Star Wars™: Squadrons Soars Into Homes Today
6
907
The Falconeer First-Look Preview – PC
7
907
Metamorphosis is 33% Off on Steam!
8
907
Werewolf: The Apocalypse – Heart of the Forest launches on October the 13th
9
907
Synth Riders Celebrates Anniversary with a Month Full of Treats and an Oculus Ques...
10
907
Worm Jazz Review – PC
All Original Content on Game Chronicles is Copyright (c) 2002-2020
Sinjin Solves Walkthroughs Copyright (c) 1996-2020 by Mark Smith