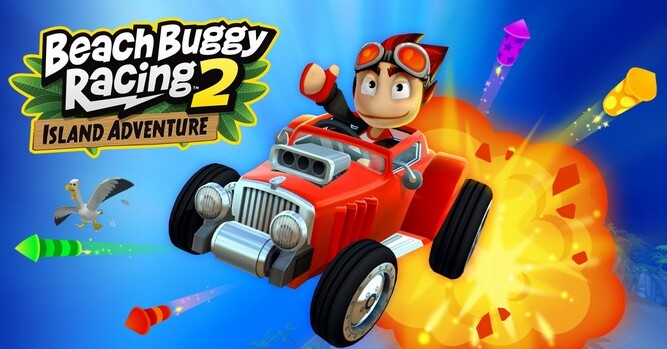 - A.I. balancing issues
- Too many weapons in play
- Challenges get grindy

One of the best kart racing games of all time.

If I were to ask you what the best kart racing game of all-time might be Beach Buggy Racing 2: Island Adventure would likely not be the first choice of most gamers…unless they had actually played it.  It only takes a few races to fall in love with this gorgeous racing game loaded with more content than the entire Mario Kart franchise, complete with multiple racing modes including a lengthy Adventure mode that acts as a sampler platter for the huge roster of drivers, large garage of cars, and dozens of insanely detailed and beautiful tropical tracks.

There is so much to do in Beach Buggy Racing 2: Island Adventure, but most gamers will likely head straight for the Adventure experience that presents you with a stunningly detailed and massive map that comes alive with subtle animations and charming icons.  In this map you will move along various paths dotted with race events such as racing, time trials, drifting, and some other non-conventional variations.  You’ll earn gold stars based on your finishing position (top 3 only) and these stars will unlock other paths to collectible power-ups and new zones with all new themes and tracks like the beach, the docks, a murky swamp, Egyptian pyramids and even a jungle with dinosaurs.  The sheer imagination and design detail of these levels is mind-blowing with pirates and dragons, giant crabs, aliens and more. 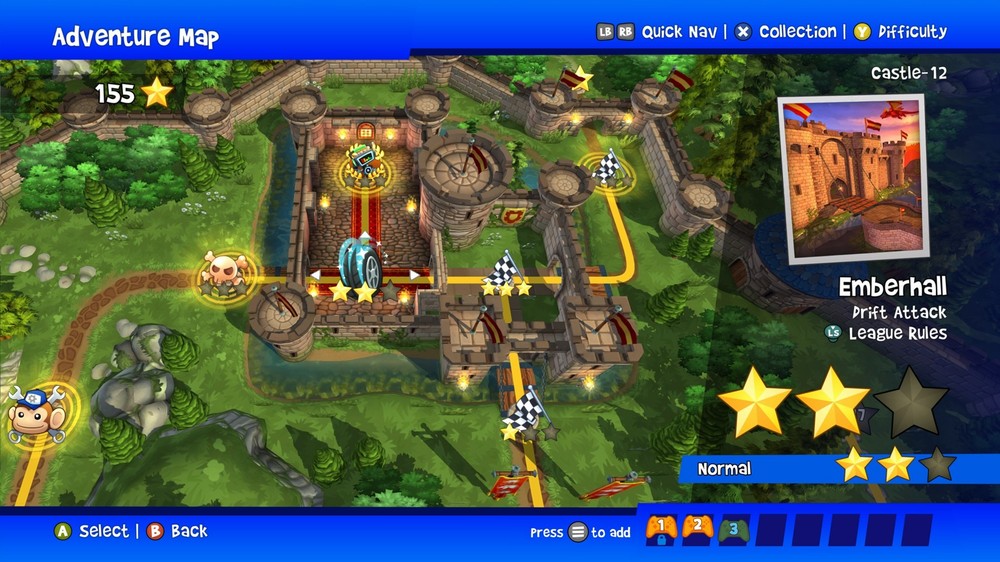 The game plays pretty much like every other kart racer out there.  You face off against seven opponents and battle your way to a top-3 finish by collecting and unleashing a massive arsenal of weapons and defensive gadgets.  If you’ve played Mario Kart or any other similar game you’ll know exactly what to expect.  You can collect up to two items at a time and use them as needed; weapons can be fired forward to behind you while armor absorbs incoming attacks and the trampoline bounces the attack back at the attacker.  There are over 40 power-ups and even talking about them here seem like a spoiler since they are so much fun to discover and use within the context of the game.  Additionally, each of the 40+ cars and trucks have their own special ability like nitrous that leaves a flaming trail behind you to damage other cars, or one girl who can fire a batch of furry monsters that attack and start to eat the other cars.  You can launch flame attacks or fire an earthquake beam that rips a crack down the track or temporarily suspend gravity so cars float off the track.  Again, there is simply too much to cover and I don’t want to spoil the surprises ahead.

There is also a deep progression system for both cars and drivers.  Drivers are not attached to vehicles so you can mix and match as you see fit.  While picking a car and driver you can bring up a list of challenges for each that show your current progression as well as any completed tasks.  Many are milestone objectives like defeating x-many opponents with a special attack while others are much more specific like having a certain driver win on a certain track as well as winning races on the various difficulty settings; a good incentive to replay races on Hard.  Completing these checklists earns you costumes for your driver and some other cool rewards. 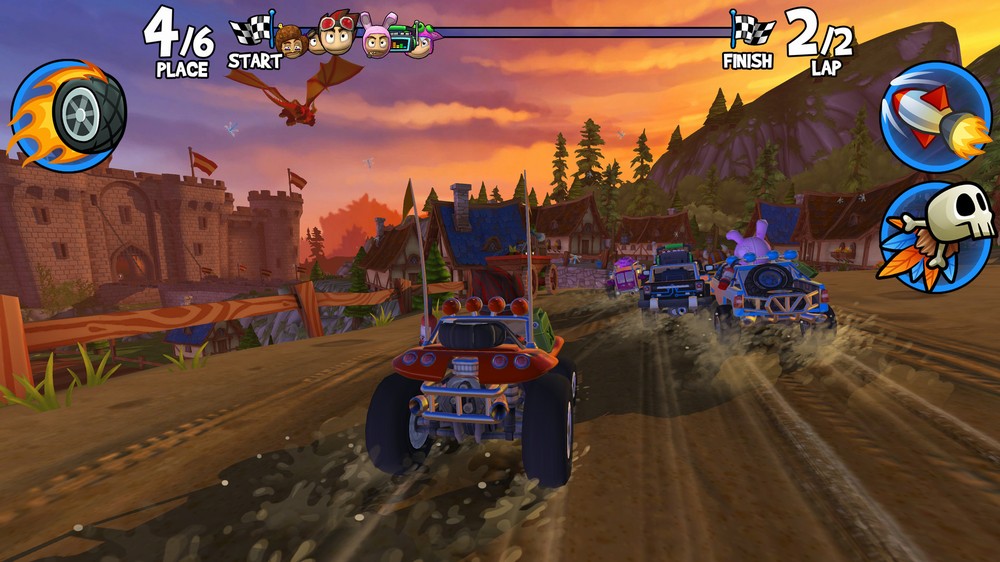 But wait…there’s more.  Hidden about the tracks are spray cans that will unlock new paint colors and designs to freshen up your stable of karts.  And as you explore the map you will come across Grease Monkeys (yes, actual monkeys) that will offer up three choices of car upgrades per garage.  These will offer boosts to top speed, acceleration, handling, durability, etc. that will carry over to all cars within your garage.  Your level of enhancement is indicated by the two-tone bar graph on the car stats page.  I was pleasantly surprised to find that you really do need to make some intelligent decisions when picking your car and driver on specific races, as these choices do make a difference.  If you have a twisty track you will want a car with better acceleration than top speed.  If you’re getting caught in traffic jams then you might want to pick the ghost pirate who can turn the car into a ghost and pass through cars and objects.

The type of events varies and sometimes you might have to come back and earn that third star after upgrading for faster Time Trial speeds or unlock a car better suited for Drift events.  You also have Firework Fury events that has you racing to complete a lap within a time limit only the track is full of fireworks that will blow-up if touched.  Beach Buggy Racing 2: Island Adventure does an amazing job of mixing up the content to keep things fresh and exciting.  The path across the map is also branching, so if you get stuck on one event there is usually another path to take.   If you earn enough stars you can even advance to the next zone without completing (or perfecting) some events.  I stink at drifting and can only get two stars on any of those events. 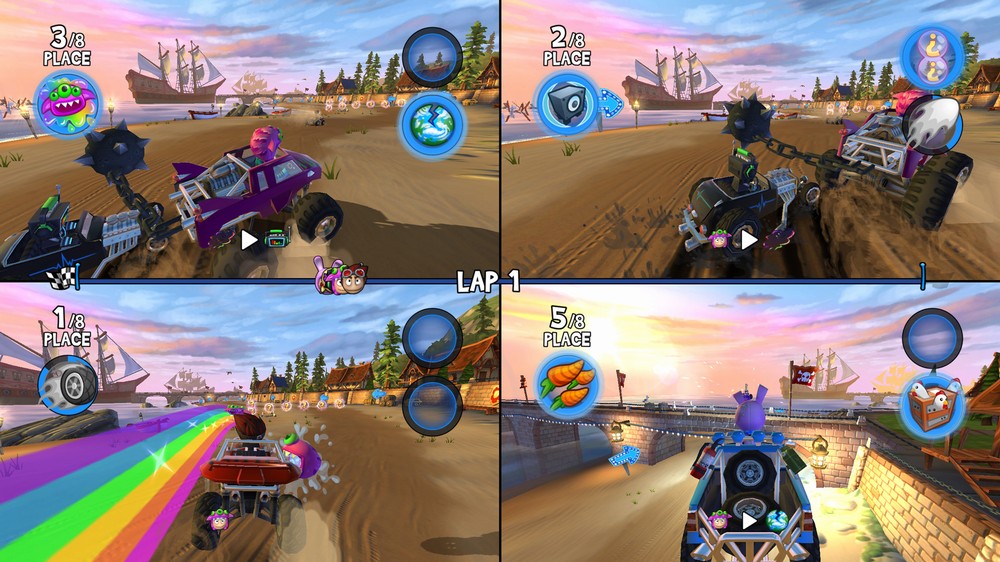 Beyond the Adventure mode you have your traditional ways to play including Arcade and some crazy multiplayer with support for 8-player split-screen.  As someone who plays on an 85” screen, this seems like an epic way to play and the perfect game-night party game; I just don’t know anyone who has eight controllers (or seven with a keyboard), but if you do then this is a game mode for you.  Even more impressive is that the game options allow you to setup various system specs for the primary and secondary viewports in order to maintain a fluid framerate.  For those who don’t have the luxury of in-home human competition the game also supports Steam’s Remote Play Anywhere that allows you to co-op with a friend who doesn’t even have to own the game.

What adds even more fun to the multiplayer mayhem is the ability to create custom race events with your own set of rules, basically changing any element of the race right down to allowing (or banning) certain power-ups.  Worldwide tournaments and cross-platform leaderboards are also great ways to extend the life of this amazing kart racer, and good luck finding those hidden Easter Eggs without some hints.  There are some fun achievements and cool trading cards to collect as well. 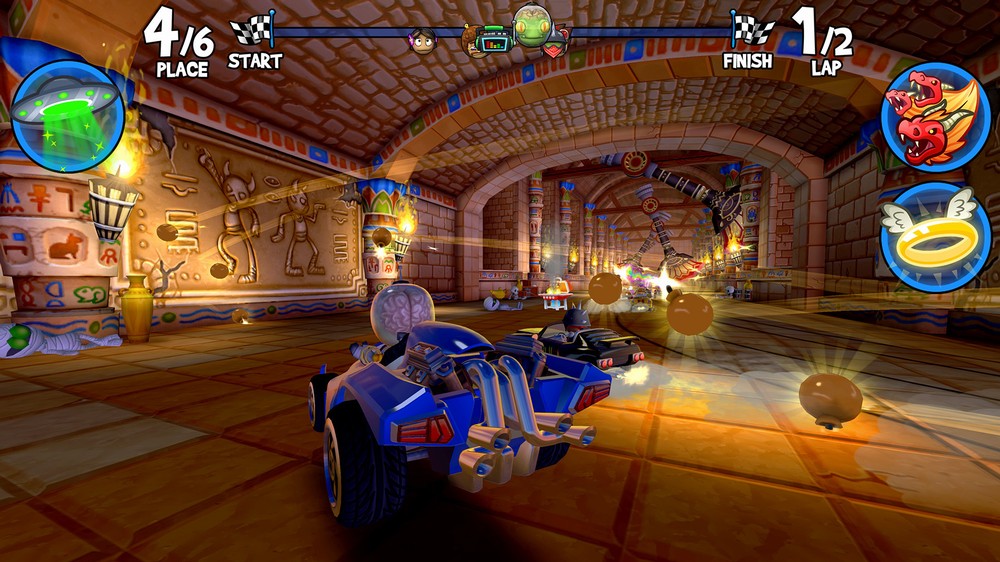 The level of audio and visual quality on display is something you’d expect from a full-price AAA title.  Admittedly, I was playing on an RTX 3080, but even more modest systems should have no trouble running this game at fluid 60fps, even with two-player split-screen.  Things get a bit more demanding during four-player races, especially when cars and gadgets start exploding all over the place.  The track design and the texture detail are fantastic with all these nice animations and special details that are easy to go unnoticed in the heat of a race.  Also worth calling out is the excellent soundtrack; much of it with an authentic island vibe and one track that sounded like it was ripped straight from The Secret of Monkey Island adventure game.  Perfect!  The rest of the audio is equally as good with a balance of engine noises and directional combat effects.  You can literally hear weapons approaching from the rear and time your defenses accordingly.

Beach Buggy Racing 2: Island Adventure is pretty close to perfection, and with a future update that balances the A.I. and limits concurrent power-up bombardment this could easily attain 5-star status.  While most kart racers rely on famous or familiar characters and one or two gameplay gimmicks Beach Buggy Racing 2: Island Adventure just floods you with quality content nicely rationed and presented in an engaging adventure map that will keep you racing for 20+ hours, and that’s before you even start exploring all the fun waiting for you in those other modes.  Don’t miss out on what just might be one of the best kart racers of all-time.