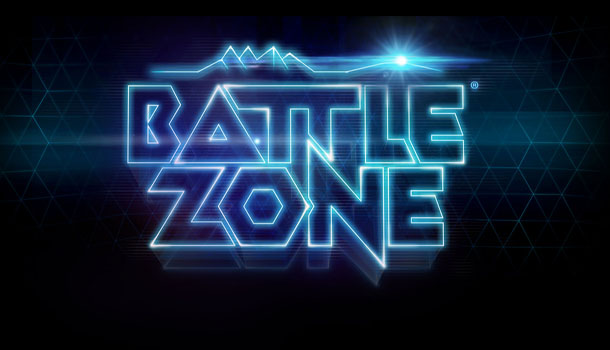 - $60 AAA Pricing
- Extremely difficult
- No checkpoints. When you are out of lives it really is GAME OVER.

A blast from the past and a cool step into the future of VR.

As a child of the 80’s I spent more than my fair share of free time in the arcades, and one of my favorite games was Battlezone. Back then the game was nothing more than raster graphics with polygonal objects dotting a barren black void with some angular mountains providing a horizon while you drove your wireframe tank model around trying to blast other tanks and the occasional UFO. Things have certainly changed in 35 years. Now, instead of putting my face into the viewfinder of an arcade machine I’m putting on the new PlayStation VR, and instead of primitive line art I now get to enjoy primitive shaded polygons.  OK – maybe things haven’t changed that much.

Both versions of the game feature the same visual isolation, but the PSVR puts you in the driver’s seat of the Cobra, the most powerful tank ever built, surrounding you with instruments and controls and an immersive 180-degree view through the canopy. You get to choose from light, medium, and heavy tanks; each with their own set of weapons, speed and armor stats. This gives you a basic starting point for how you want to play, and then as the game progresses you can customize your tank with additional upgrades between missions.

Battlezone can be played online with up to four players or you can tackle the massive campaign alone in an offline campaign that comes in short, medium and long formats. To put this in proper perspective, a short campaign will have about 10 missions, a medium about 12, and the long 15. When I say “mission” I am referring to a single hex on a fairly large hexagonal map that has you starting on one edge and fighting to the enemy base on the other side. Those numbers above are the shortest distance from start to target, but depending on your chosen duration you will also have 3, 5, or 6 shield generators scattered about the map. Some of these are on the way to your target while others may require a short detour.  You’ll want to knock out as many of these as possible to make your final battle as easy as possible. 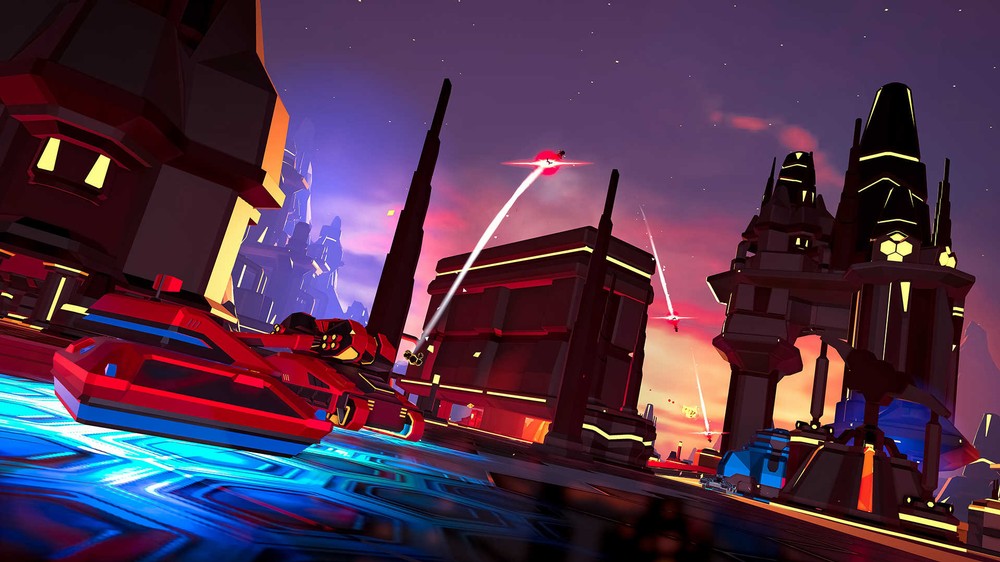 I can’t say for sure how long a full game of any duration lasts because as of this point (about 20 hours of play) I have yet to win a campaign. My record is making it across six hexes before I lost, and that took nearly two hours. You start with 3 lives and may purchase more for increasing amounts of data currency (1000 for first, 2000 for second, etc.), but those credits are also needed to purchase tank upgrades for better shields and new weapons. There is considerable strategy in just deciding how to best spend your data points.  You can upgrade between every mission but can only change out weapons when you land on an Armory hex.

While I would normally toss aside any game I couldn’t make significant progress in during the first 20 hours, Battlezone has that addictive “one more time” arcade quality about it, and I do seem to last a bit longer with each subsequent game. I’m learning new tricks and tactics all the time, but the real challenge lies in the fact that everything is procedurally generated so not only is the hex map different each time you play, what’s in each hex also changes.

You have indoor and outdoor battlefields as well as a mixture of both. You’ll go up against a variety of tanks, flying drones, and giant robot turrets that shoot you from across the map. Using the terrain and any natural or manmade obstacles to block incoming fire while launching your own successful attacks is key to success.   Tanks have four weapon slots but you only start with two weapons, so again, you have to decide to upgrade the ones you have or purchase new weapons to fill those empty sockets. Weapons also have an elaborate upgrade system where you can increase the rate of fire and damage dealt. There is even a cool active-reload feature (just like Gears of War) where you tap the RB button at just the right time for faster reloads. 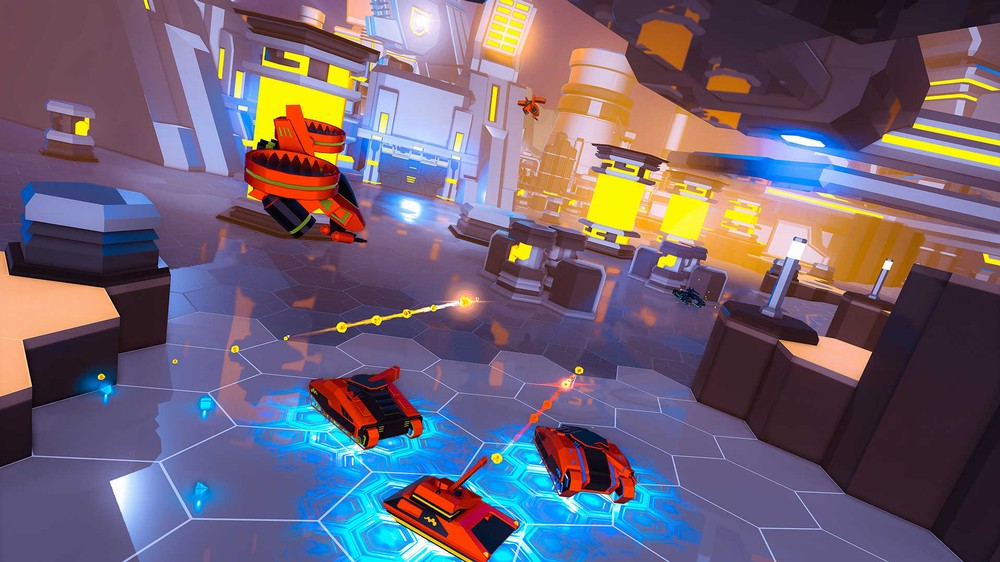 Gameplay varies in pacing.  With only a few enemies or perhaps a stationary turret you can be more tactical, but when 3-5 tanks are attacking you’ll need to stay nimble and unload streams of rockets, cannon fire, or lock-on missiles.  When things calm down you can find radar towers and other installations you can hack to reveal enemy locations on the radar or find blueprints for new weapons that will unlock at the next armory.

There is this unique all-or-nothing vibe with Battlezone because when you do eventually lose all your lives you also lose all upgrades and progress you have made during that last campaign. This creates some almost unbearable stress when you are on your last life and trying to finish your current hex/mission. To keep things challenging, the longer you play the more the enemy level increases – whether you are upgrading your tank or not.  Things can get out of balance quickly if you’re not careful.

Battlezone is a perfect fit for the PSVR. Admittedly, the graphics are far from next-gen, looking more like something from the PS2 or GameCube era, but the game still has this funky TRON feel to it, and you are quickly immersed in the cockpit graphics and the intensity of the gameplay, which is silky smooth with nary a hint of motion sickness, even during multi-hour sessions. The menus and upgrade screens are all integrated right into the game creating a totally seamless and immersive experience. 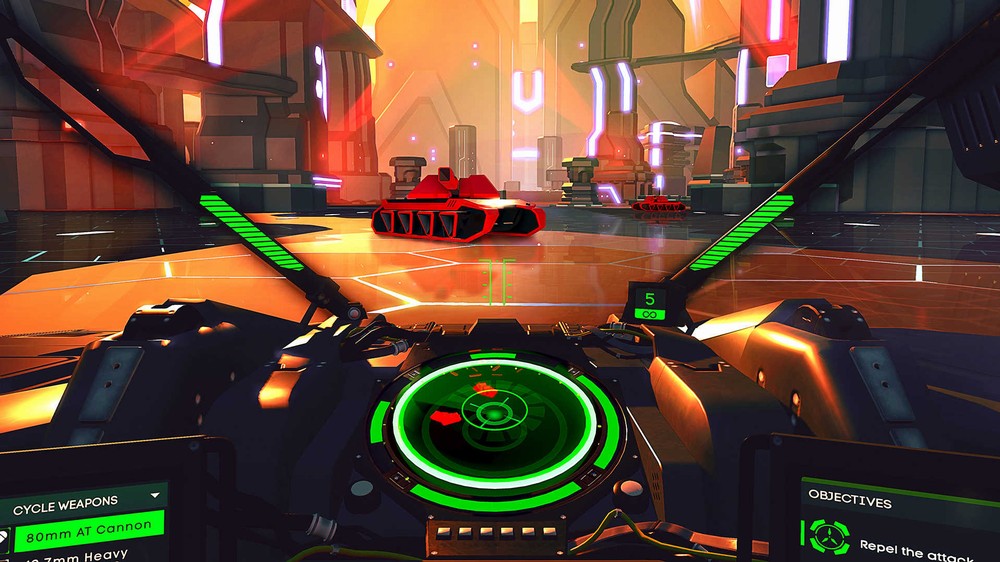 Controls are excellent despite the lack of any look-and-shoot weapons. I was kind of hoping my visor would allow for some sort of instant targeting, but I guess it’s more realistic having this slow-moving giant weapons barrel aiming up and down while you spin your tank around trying to line up the shot. You still get to look around the cockpit and outside the panoramic cockpit view using your headset.  There are some cool concepts in place like using your shield energy to turbo boost at the risk of being one-shot killed until they recharge.

The audio is awesome with some great electronic and synth tunes that dynamically adjust to the intensity of the battle, and there is always some useful com chatter telling you what to do or where to go. Sound effects are excellent and the entire package is presented in an immersive 3D surround format that works with headphones or a good home theater setup.

Battlezone is one of my top five games for PSVR launch – it might even climb up a few notches if I can ever manage to win a game. The only downside is the $60 sticker price – one of the most expensive VR games at launch, and to a lesser extent, the brutal difficulty that makes it nearly impossible to finish an entire campaign on the Normal skill setting regardless of duration. If you can get this game on sale or some sort of discount (like Best Buy Gamers Club) then I totally recommend you do, otherwise that same $60 can get you up to three other VR games that can provide more varied and less frustrating fun.  But whether you get it now or later, if you own a PSVR you definitely want to get Battlezone.  It’s a blast from the past and a cool step into the future of VR. 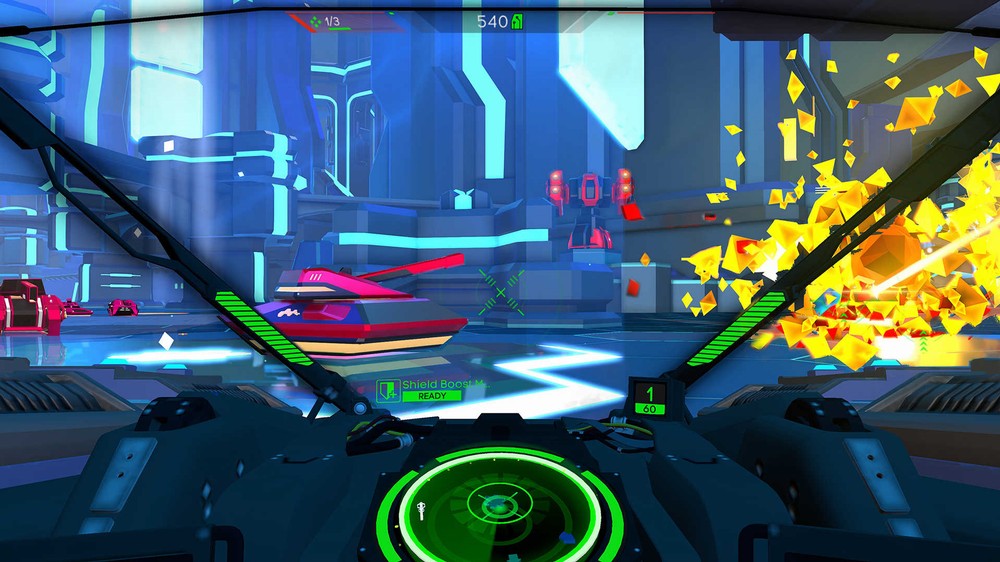 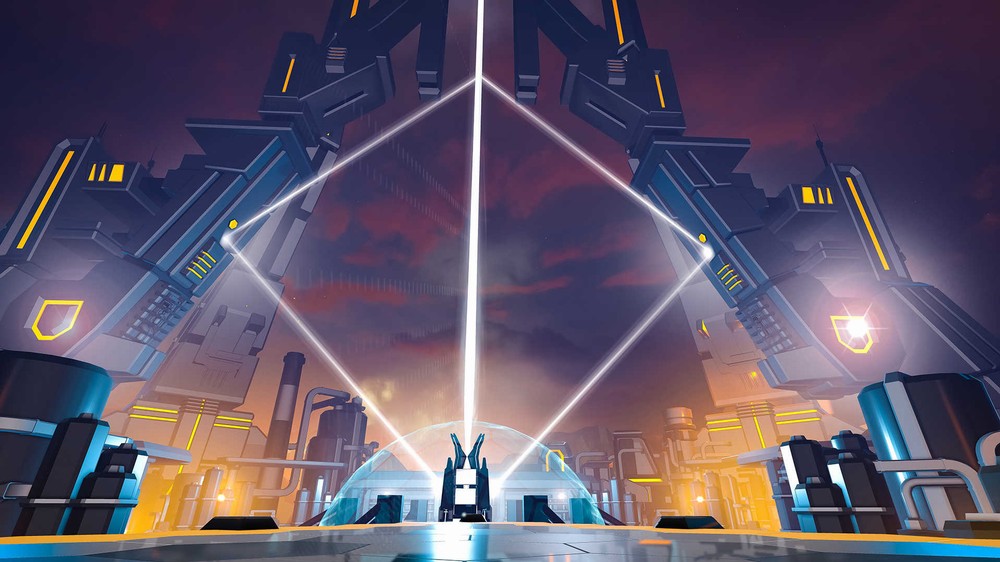 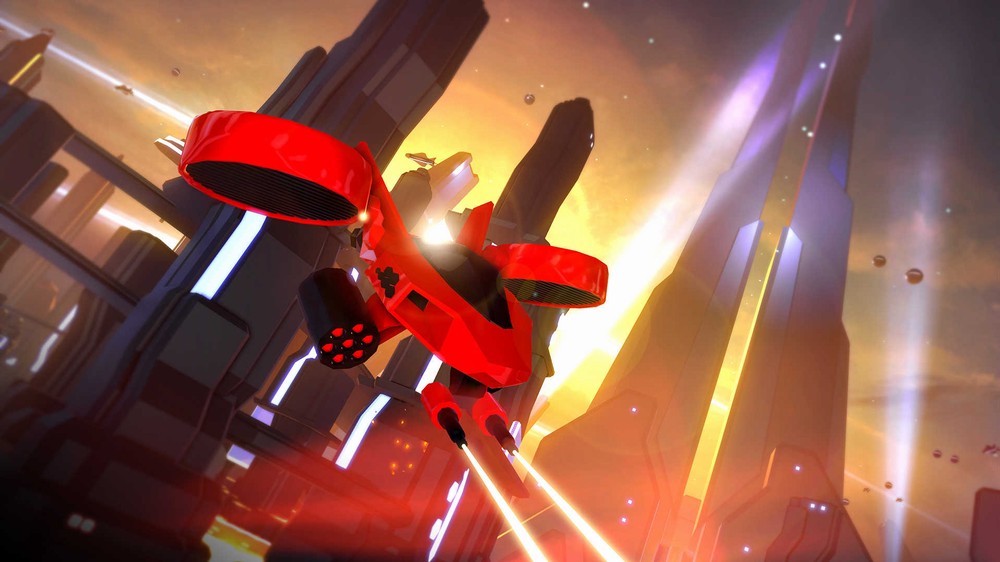 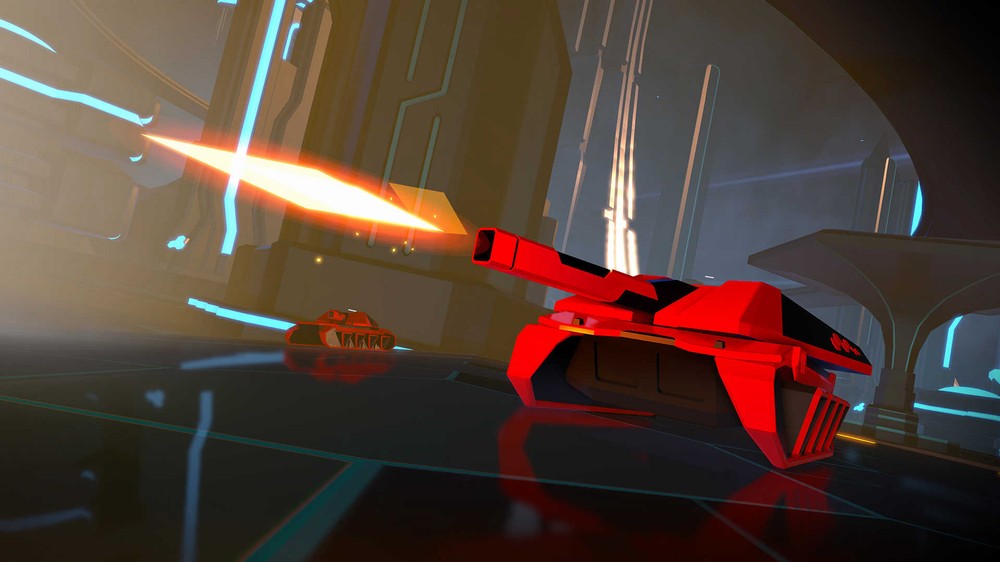 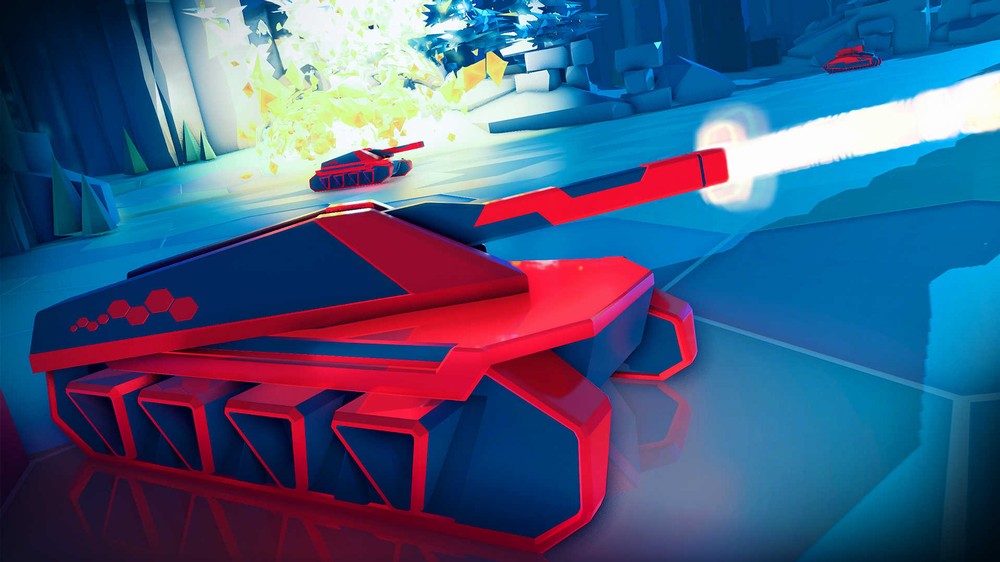 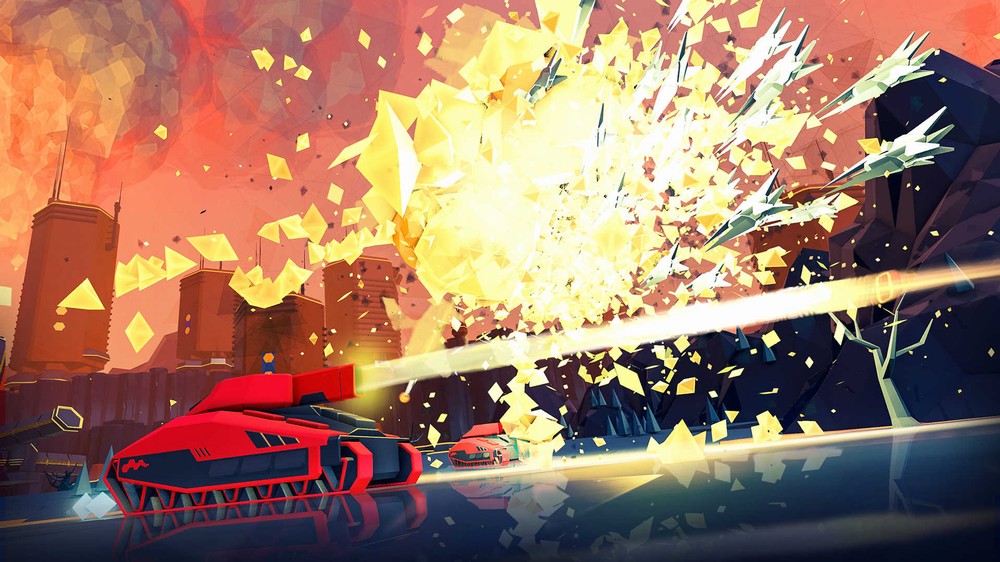 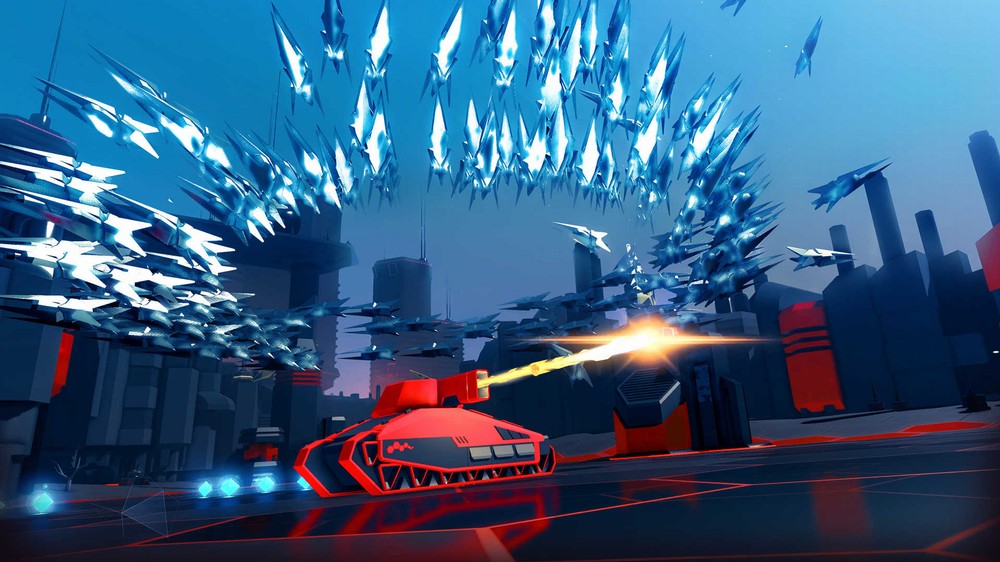