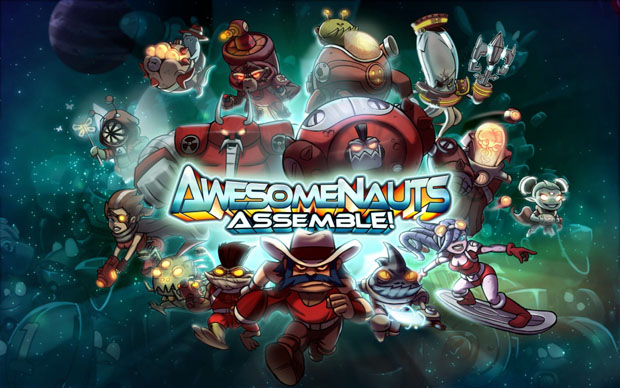 - Text can be quite small
- Initially daunting

A great introduction to the MOBA genre.

Awesomenauts Assemble! is the latest in a seemingly ever-growing line of games that were previously released on last-gen consoles, but are now available on current-gen in the guise of ‘special edition’ packaging. The original Awesomenauts released in the spring of 2012, and though PlayStation 4 owners have been able to purchase Awesomenauts Assemble! since 2014, Xbox One owners have had to wait until now to get their hands on the updated version of the title.

At its heart, Awesomenauts Assemble! is a streamlined console version of the MOBA genre, made popular on PC by the likes of League of Legends and Dota 2. What this means is that players choose from a varied selection of characters, each with their own particular skill set, and fight in fast-paced battles until one side emerge victorious. Awesomenauts Assemble! attempts to inject some narrative context into its setting with a brief summary of a huge interstellar war between different factions of robots, but in truth, there isn’t much story to speak of, and much of your time will instead be spent focused on destroying turrets and the players on the opposite team. 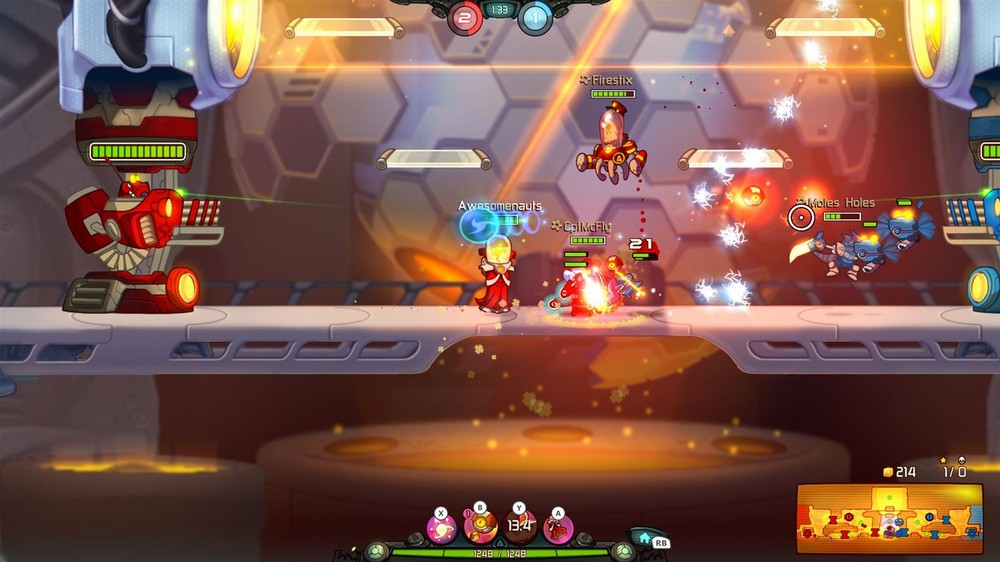 This near-absence of story also comes with an understandable lack of single-player content. Awesomenauts Assemble! is designed as a multiplayer experience, with both online and couch options available, and though you are able to pit yourself against a team of bots, the true Awesomenauts experience is to be found online. Two teams of three human players is far superior to one human player and five AI characters, and aside from attempting to become familiar with the abilities of a new character, there isn’t much incentive to playing the game alone.

There are two types of progression within Awesomenauts Assemble!. The first, in-match progression, is fulfilled by earning solar, currency which allows players to purchase new abilities for their chosen character, or to upgrade abilities already unlocked. These upgrades are transient in nature, however, as they are only valid for the current match that you’re playing, and need to be repurchased through the duration of any subsequent matches. It’s an interesting way of doing things, as it both rewards players for doing well in an individual match, and ensures that high-level players aren’t able to wipe the floor with newcomers from the get go. 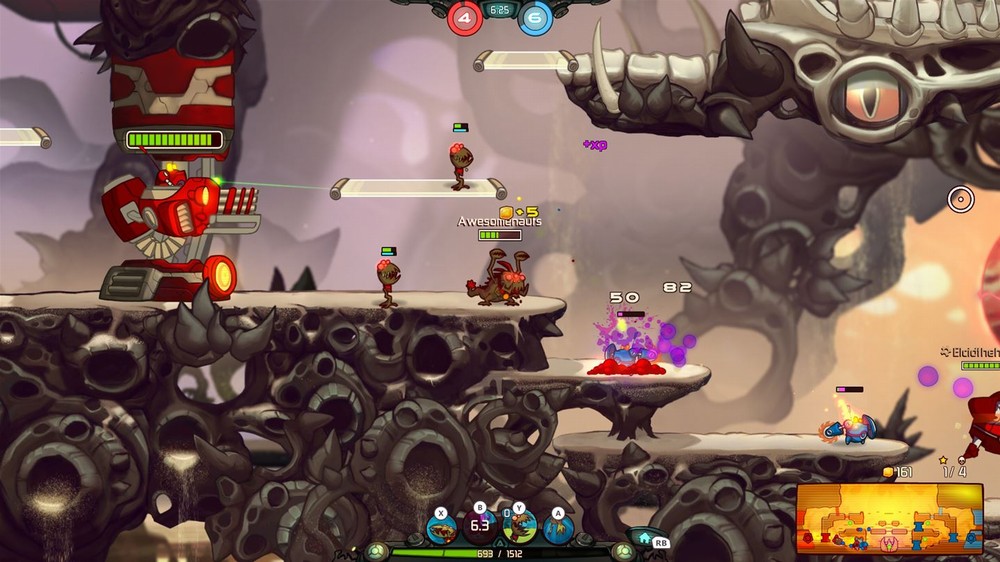 The other form of in-game progression is more permanent, and is completed by earning XP within matches. As your profile levels up, you’re allowed access to more characters and more stages within which to use these characters. There are eleven base characters within Awesomenauts Assemble!, all of which are unlocked by the time you reach level 22, and there are eight further characters purchasable through the Xbox store, either individually or as part of an expansion. There are also extra bonus costumes that can be purchased, but I never felt as if I was missing out by not purchasing them, either in terms of content being locked away or other players that did own the extra content having an unfair advantage over me.

Each of these characters presents a distinct skillset and gameplay experience, and I can see a lot of players becoming extremely familiar with one or two particular characters and harnessing their abilities, rather than being just ok with the entire roster. Some characters feel lighter to control, can jump higher, have melee-based abilities, while others are heavier, can take more damage, and focus on ranged attacks. Others have mix-and-match abilities from these types of skills, and others have a completely different combination of strengths and weaknesses. There’s enough variety here to satisfy almost every type of player, and the fact that each character has their own entrance music and lines of dialogue is a welcome addition that makes Awesomenauts Assemble! truly feel like the game that you want it to be. 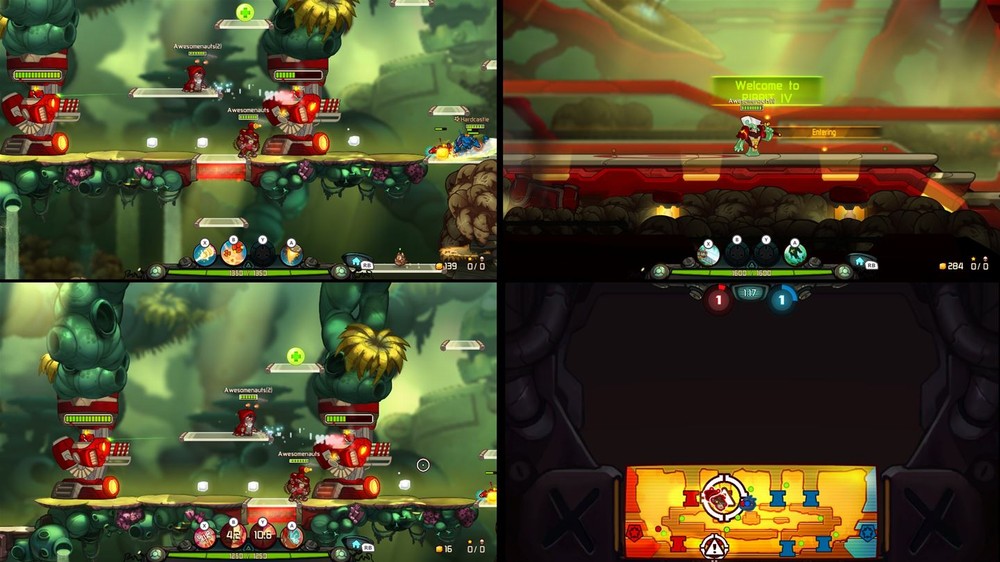 Awesomenauts Assemble! is a great introduction to the MOBA genre for players on console, and though there are more alternatives available now than when the original Awesomenauts released, there’s enough difference between Awesomenauts Assemble! and the likes of Battleborn or Overwatch for each game to stand on its own two feet. While the range of characters and abilities may seem initially daunting, it simultaneously ensures that each player has a number of choices in how they want to approach the game, and that there’s enough longevity here to keep the online community going for quite some time. MOBAs aren’t necessarily for everyone, but if you’ve been sitting on the fence, or have been intimidated by the various choices available, then Awesomenauts Assemble! is a great place to start. 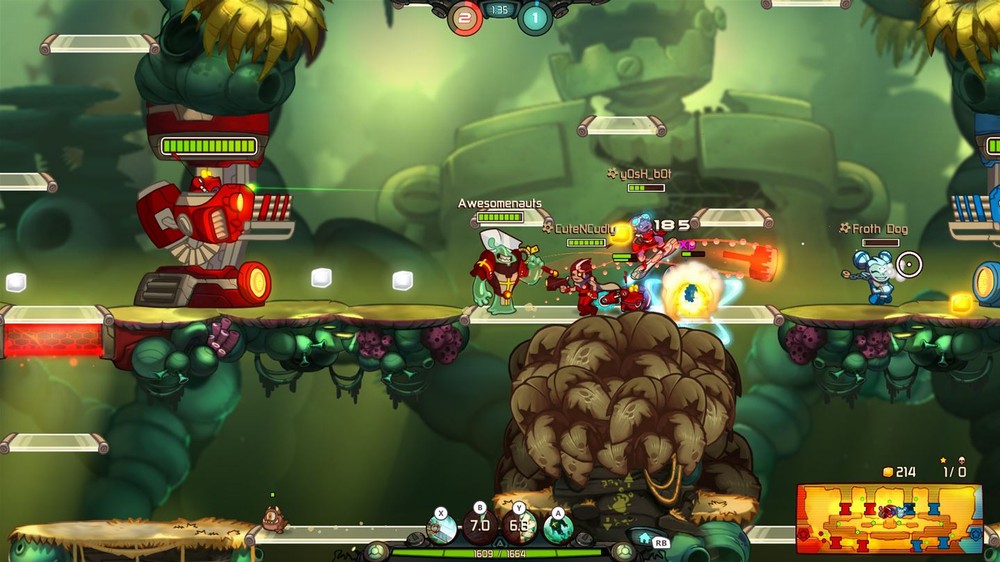 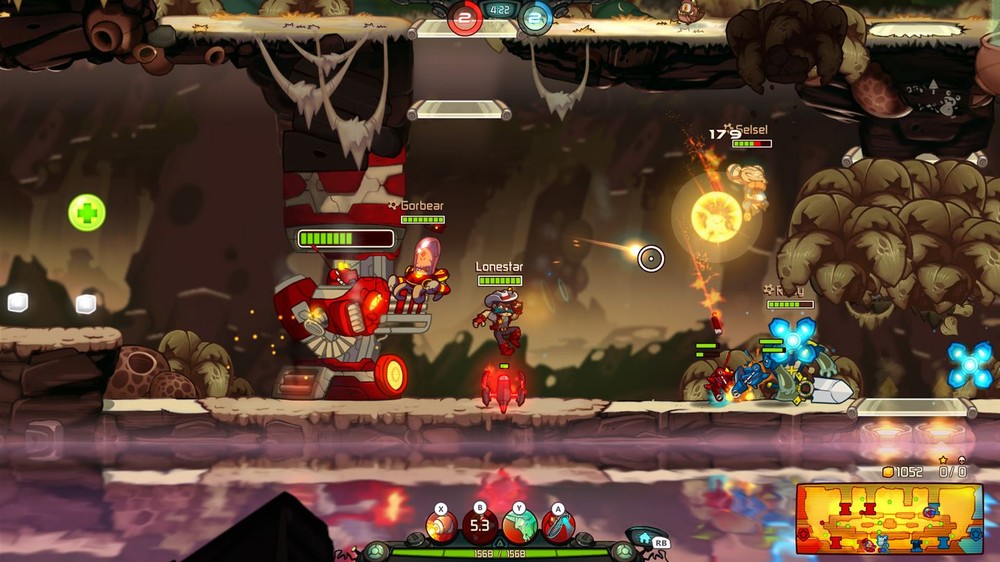 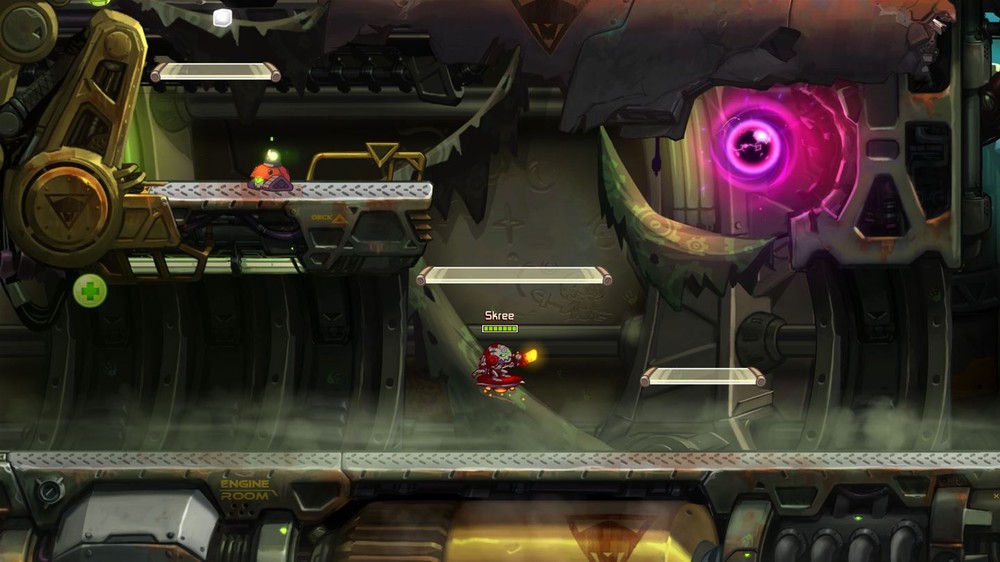 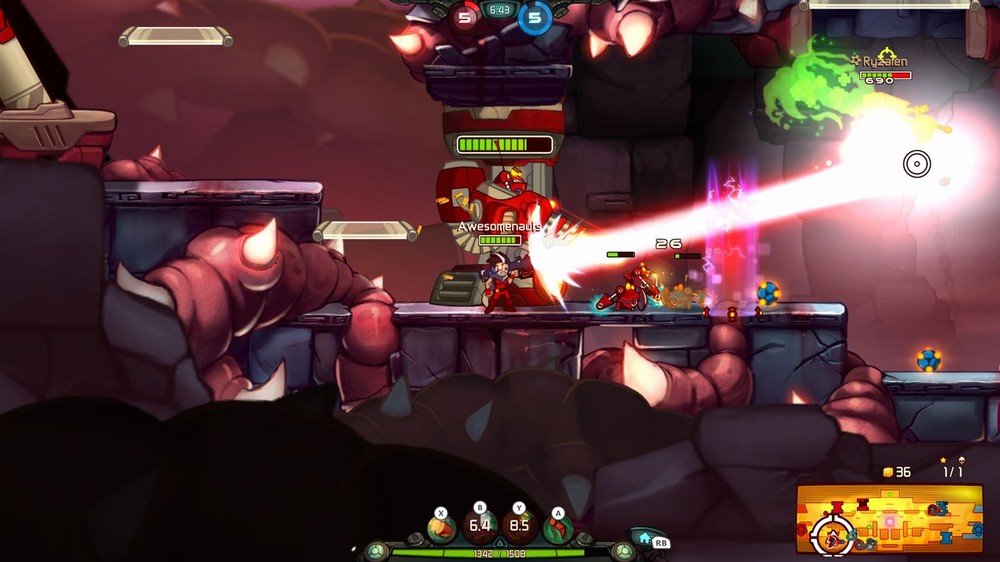 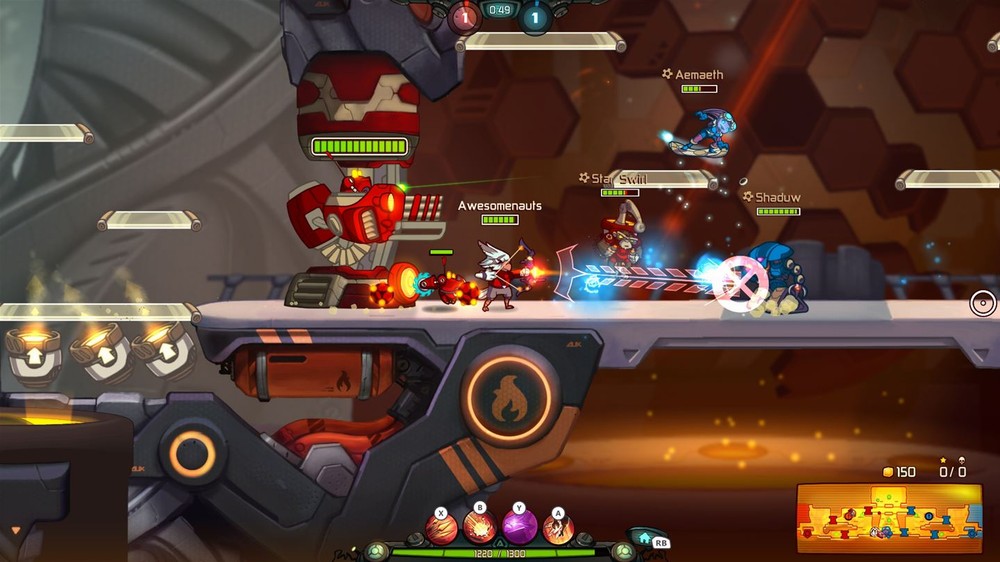 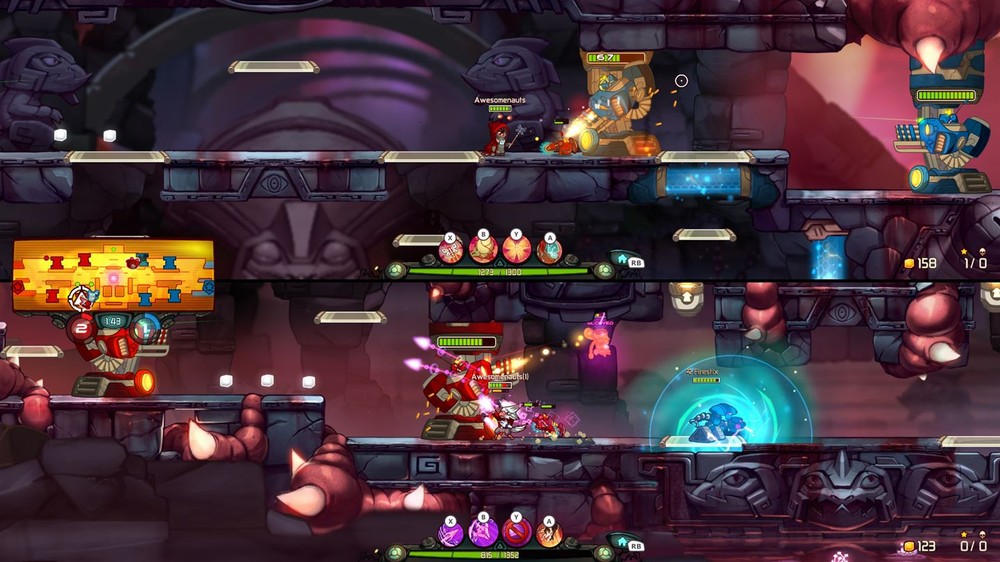 1
769
The Walking Dead: Saints & Sinners Review – Oculus Quest
2
706
Synth Riders Celebrates Anniversary with a Month Full of Treats and an Oculus Ques...
3
705
Take to the Skies and Choose a Side in the New Trailer for Next Generation Air Com...
4
705
CRASH BANDICOOT 4: IT’S ABOUT TIME IS AVAILABLE NOW
5
705
Frictional Games Shows Off First Gameplay Footage of Amnesia: Rebirth
6
705
Join the Galaxy’s Finest as Star Wars™: Squadrons Soars Into Homes Today
7
705
Metamorphosis is 33% Off on Steam!
8
705
Werewolf: The Apocalypse – Heart of the Forest launches on October the 13th
9
705
Worm Jazz Review – PC
10
704
The Falconeer First-Look Preview – PC
All Original Content on Game Chronicles is Copyright (c) 2002-2020
Sinjin Solves Walkthroughs Copyright (c) 1996-2020 by Mark Smith