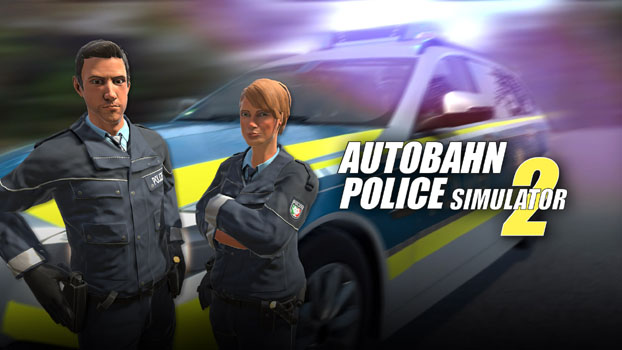 A comically bad experience and a failure on most fronts.

In the 1990s, the UK had a TV show called Police Camera Action!, a show about traffic police and road crimes. Similar to Cops in the US (though with a little less fetishization of police work), Police Camera Action! attempted to show how police dealt with crimes and dangerous driving from the perspective of the police officers involved. I hoped that Autobahn Police Simulator 2 would offer the chance to play through some similar scenarios and give me the chance to catch some criminals and while it does go some way towards this, it stumbles for a number of reasons.

The simulator genre has become quite popular in recent years, with otherwise potentially mundane activities being gamified. This allows players to act on a microscopic level, handling tasks that other games would normally automate, and can lead to an intensely detailed experience. Though Autobahn Police Simulator 2 does contain some of these elements, it is one of the lighter simulators that I have played in recent memory and lets you get away with a lot more than other games of a similar type would. The clearest example of this is in the relative lack of failure states: there is a chaos meter within the game that fills up as you crash into items or other vehicles and causes your current mission to fail if it reaches 100%, but it is a forgiving (and unpredictable) system that can easily be manipulated and doesn’t require the player to exercise that much control over either their handling or their speed. 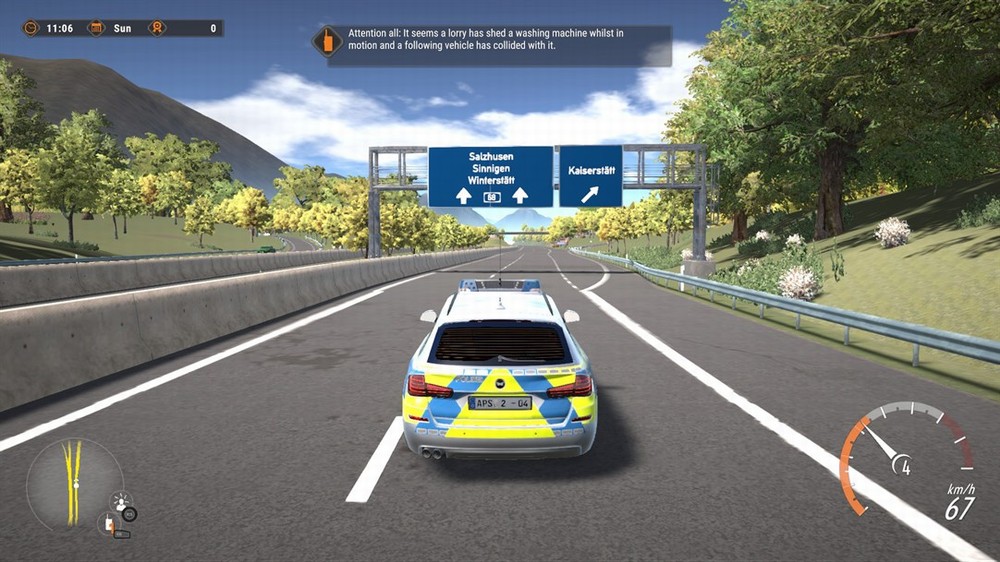 Because the difficulty level is reasonably low, Autobahn Police Simulator 2 is quite a breeze to progress through, even if there are a couple of artificial roadblocks that might halt your progress for a short while. As well as a small amount of open-world activities (most of which echo roles that you will perform through the course of the main story) there is a central narrative that contains twenty different missions. To the game’s credit, these missions vary in what they ask you to do, and although they all revolve around the Autobahns they do switch up the formula to keep the missions interesting. You start by dealing with broken down vehicles and traffic collisions, before entering into a darker world of drug deals and human trafficking. There isn’t much of a sense of urgency to the missions, and although the latter half of the game starts to introduce time limits to your actions they are only ever limited to your travel time, meaning that once you reach your destination you can take a long as you want.

I found the introduction of time limits to be disappointing, however, as I was a frequent user of the fast-travel mechanic in the game. It’s not so much that the map within Autobahn Police Simulator 2 is huge but more the fact that the world is never interesting and driving from one location to another is always mundane and restrictive. There are heavy concrete barriers between the autobahn lanes, and minimal points to turn around, which can result in you needing to travel halfway across the map in order to find a road that will take you to an objective only a couple of kilometers away from where you started. The act of driving is functional, even if handling leaves a little to be desired, but the main issue is that there isn’t anything of note to look at or do while driving outside of avoiding other cars. Chatter that comes through the radio between other members of the force is limited and repetitive, and the minimal side missions that are available are unable to be initiated if you’re already underway with a mission. 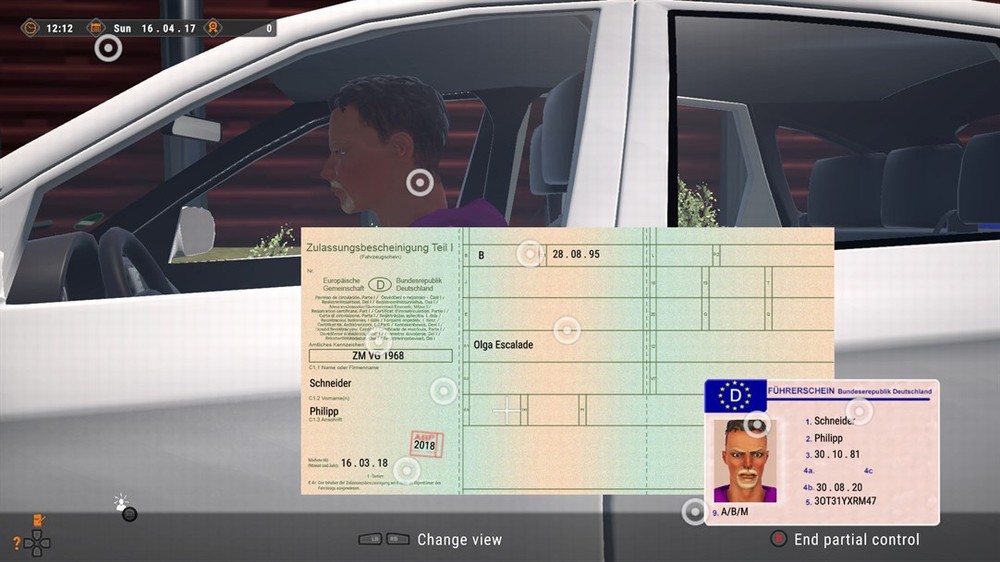 It also doesn’t help that the visuals within Autobahn Police Simulator 2 can most kindly be described as rough, which means that there isn’t even anything pleasant to look at while you’re driving. Pop-in is frequent and worryingly close to your location, and the framerate starts to suffer at even medium speeds. One you get out of your car, though, the issues start to mount up fairly quickly. The world of Autobahn Police Simulator 2 isn’t densely populated by either NPCs or objects, but the detailing on both of these still suffers greatly, with the player character and the other characters that they interact with over the course of the game looking like they have been poorly modelled out of clay.

In general, Autobahn Police Simulator 2 is a mess of a game, from a camera that swings around wildly at the slightest of nudges to a level of voice-acting that seems to resemble Alexa and Siri having a back-and-forth in a locked room. There were a number of moments where I laughed out loud at the game, including one where opening the door on my suspect revealed him to merely be a head sticking out of the floor, and multiple instances where gently nudging a car caused them to catapult through the air like a soccer player desperately looking for a foul. However, despite the multitude of issues, I played my way through to the end of the game and if someone asked me if I enjoyed myself, I would have to say yes. I can’t quite discern how much of my enjoyment came from the game itself and how much came from merely observing the game, but I rarely felt an urge to give up on it. 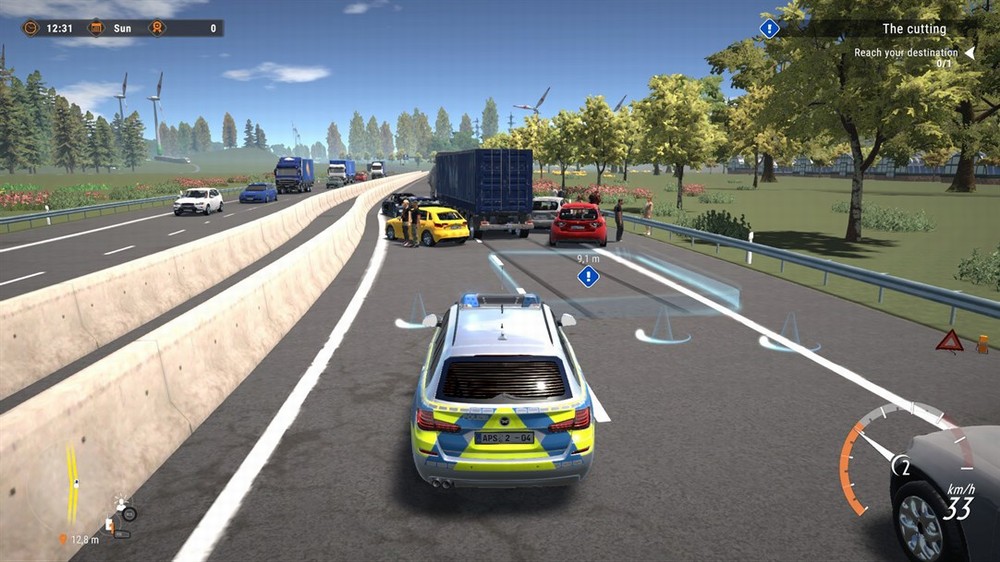 That’s not supposed to be a tacit endorsement of Autobahn Police Simulator 2, however, as it is still a game that I am surprised passed any form of internal quality check. Despite my enjoyment of the experience I can’t really recommend a purchase outside of anyone who possesses a morbid curiosity into how many ways a game can be broken and still find its way to retail, especially in kind of market we have now where it feels like the vast majority of games are polished to within an inch of their lives. I don’t want to be cruel to Autobahn Police Simulator 2 as I honestly don’t regret the time that I spent with it, but for the function of trying to objectively reflect how the game functions, plays and presents itself, I have to say that Autobahn Police Simulator 2 is a failure on most fronts.