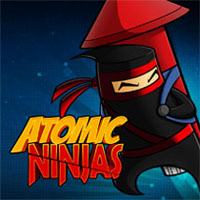 An enjoyable take on what games like Smash Brothers started but is different enough to make it interesting and challenging.

I was never one for the whole Smash Brothers craze back in the day despite owning a N64, though I have dabbled in it. Then there were those other games that tried to capture some of that magic over the years including Sony’s PlayStation All-Stars last year which just didn’t do anything for me. Grip Games, the developers behind the widely addictive The Impossible Game, however takes that beloved formula and turns things on their head with the release of Atomic Ninjas for the PlayStation 3.

Atomic Ninjas is a PlayStation Network title that revolves around 7 unlockable ninjas that survive (well most of them) a nuclear blast that seeming wipes out all life. That’s it as far as the story element is concerned as Atomic Ninjas’ main focus is in its Multiplayer Mode though there is a Single Player functionality seen through the Quick Match mode. To lay down the ground rules, Atomic Ninjas starts players out with a little tutorial covering the basic to make you an effective ninja in no time.

The thing about Atomic Ninjas is that you can’t physically defeat your player controlled or CPU bots opponents by normal means. Each of the ninjas comes with their own little back story (found out only in text) and a default combination of attack and navigational technique. For starters your default ninja “Rogue” is equipped with a grapple hook and a boxing glove. Each character has the same double jump ability though which is quite useful for quick movement through the multi platform arenas. 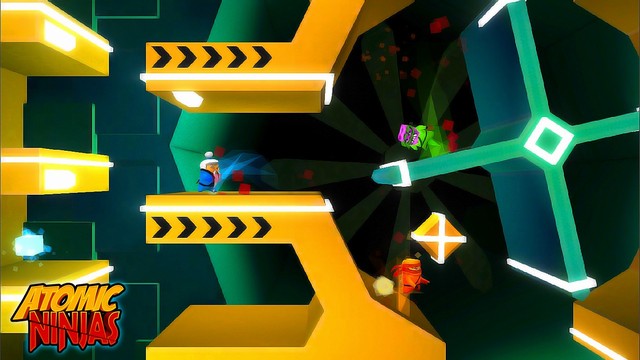 Actually defeating your adversaries requires you to strategically knock your enemies into arena specific traps or into one of the many “instant death” zones like lasers and lava pits. Littered throughout each of the 6 arenas are ability pickups that can be swapped out or stolen from defeated foes like the rocket pack or telekinetic box lifting power. You traversal and attack powers are effectively mapped to the L1 and R1 button for quick use and the Right Stick aims most of your attacks and one traversal ability, much like a twin stick shooter.

Atomic Ninjas supports up to four players in both local couch party combat and online multiplayer with all your traditional multiplayer modes available here. Most players might start out with Deathmatch or Team Deathmatch but you can quickly change it up to a round of Capture the Flag, the keep away Treasure Hunt or King of the Hill which is one of my favorites. Easily my favorite though is the Objectives Mode which randomly changes the game type up right on the middle of a match. One moment you’re teaming it up and the next you’ll be pitted against each other as you try and keep the hill. It’s the highlight of Atomic Ninjas as it encompasses the fast paced nature of the title in one fell swoop.

One of my favorite features that Atomic Ninjas has to offer is the fact that when playing on both online and off you can add bots to any match to balance teams if you can’t find that 4th real player. I actually managed to do full party matches during my time playing though its nice to have the ability to flush out teams. As you complete matches you raise in rank depending on how well you place in the match and if you complete several side objectives like punching a box resulting in another player’s character getting KO’d. The six other ninjas are unlocked at predetermined ranks and the latter affects unlocking super abilities like being able to triple jump or run faster. 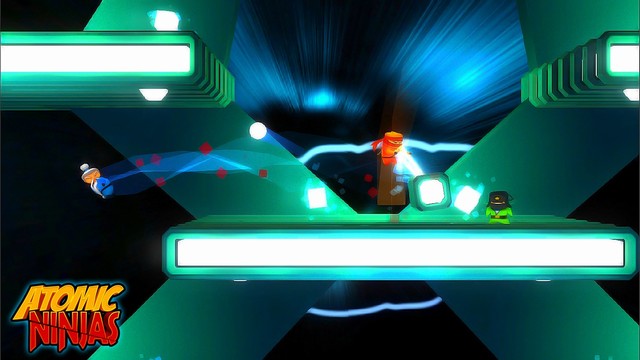 Luckily telling your ninja apart from one another, especially in the eventuality of mirroring player avatars, is delegated nicely by making each ninja a different basic color. Much like the title suggests the color palette of the arenas are quite Atomic in nature featuring bright blues, reds, greens and oranges to mark the platforms and boxes. Each arena features sharp artwork both in the foreground as well as the sometimes animated backdrops. I really enjoyed the N00B Rage animation that activates when a player or CPU Bot has been getting their butts kicked royally. Similar to a death perk your ninja sort of catches on fire and screams in rage as they get temporarily more powerful which is hilarious(just not to the receiver) to watch.

My few issues with Atomic Ninjas are that the arenas sometimes feel too big for just four characters to navigate. There is one cool feature when playing local multiplayer each player gets their own quadrant of the screen to see their ninja up close though instead of one large zoomed out screen. The other is that I experienced lag off and on during online play. It wasn’t every match but enough to be a bit of an annoyance. On a positive note, Atomic Ninjas is part of the Cross-Buy program so picking this up on the PSN will gain you access to the Vita version as well from some quick mobile combat. Your progress on the PS3 version also cross-saves to the Vita version so there’s no need for separate save files. The only thing that I couldn’t tell by playing was if you could play against Vita owners with the PS3 version as there is no way to really see.

Atomic Ninjas is an enjoyable take on what games like Smash Brothers started but is different enough to make it interesting and challenging. Players will have fun finding their favorite combination of special abilities, attacks and traversal abilities to master as they compete against friends or complete strangers. Atomic Ninjas for the PS3 is another welcome addition to the PlayStation library no matter which version you pick up. 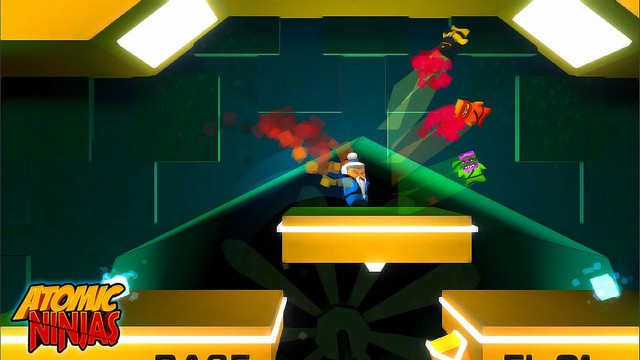 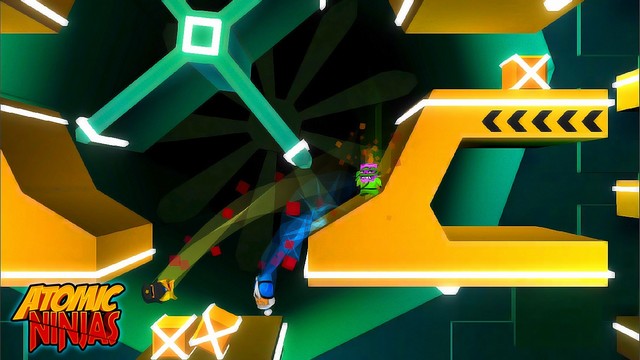 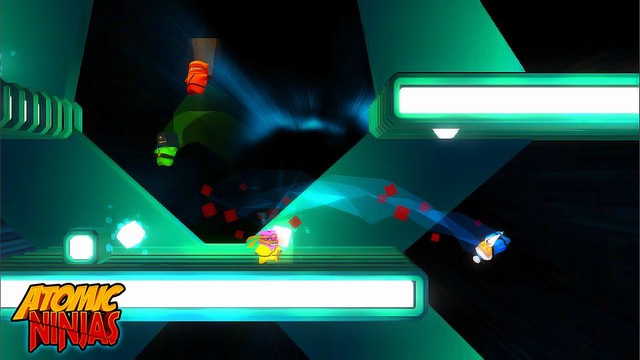 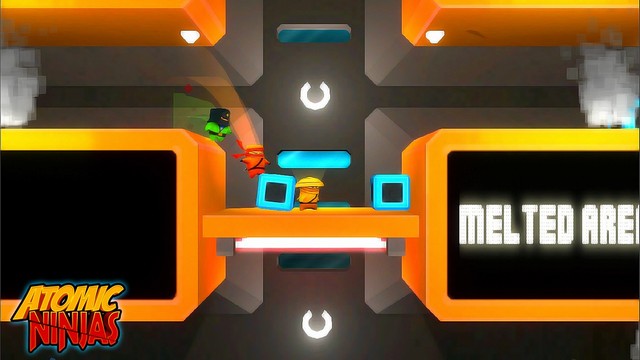 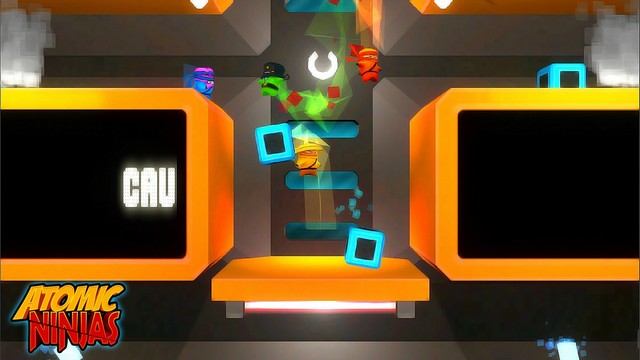 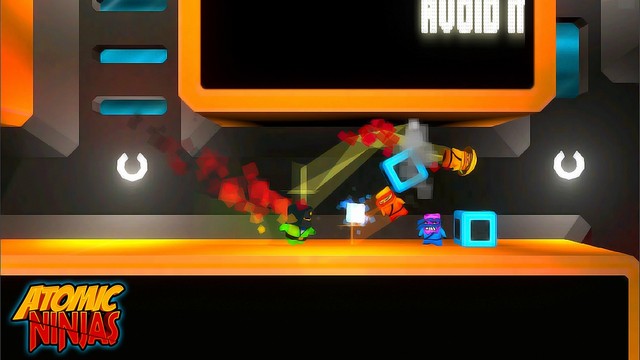 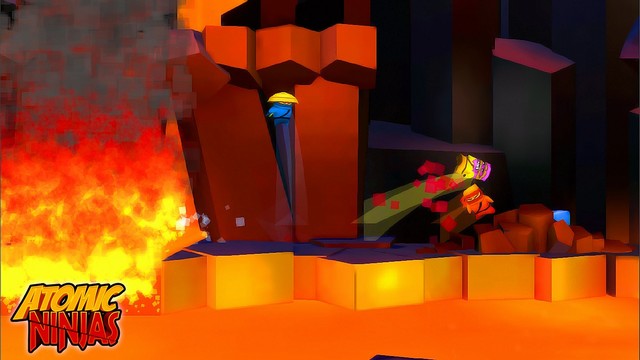 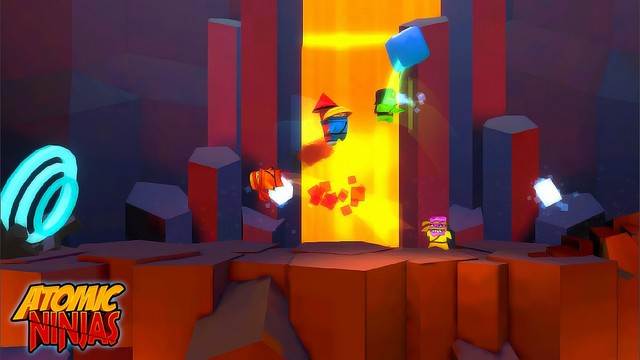 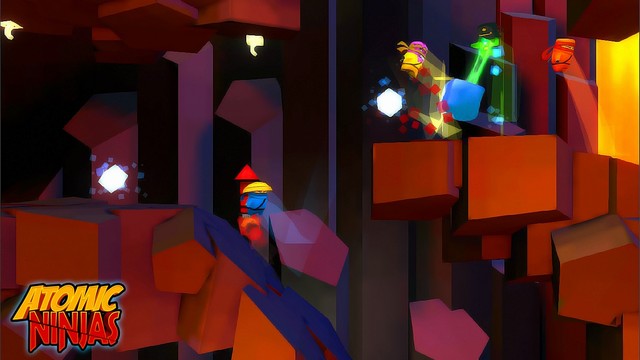