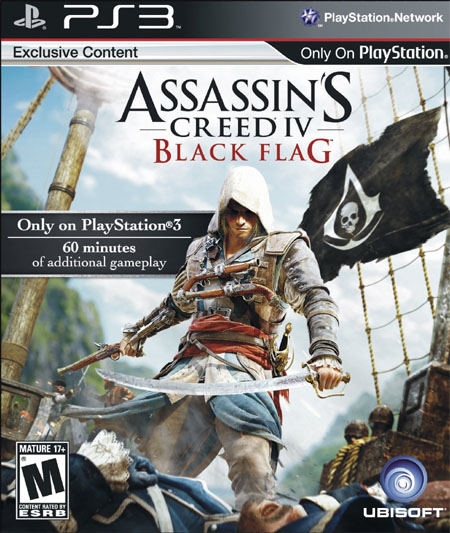 For the player looking for a nautical game of piracy, there’s really nothing better out there.

Assassin’s Creed IV: Black Flag feels like a game at war with itself. For every ecstatic moment of piracy at war on the high seas, there’s a mission awash with tedium. For every time you feel like an acrobatic badass murdering your way through the Caribbean in the golden age of piracy, there are aching stretches of time spent crouched in one of the game’s countless stealth shrubs. What could have been an amazing game about piracy is marred by the unfortunate fact that it has to be an Assassin’s Creed game.

That sounds a little bit harsh, but it was hard for me not to have deeply mixed feelings about the game. What it does well, it does excellently. What it doesn’t do well, it does so poorly that it just drained the fun out. There’s not much middle ground in the game.  That said, it’s still better than Assassin’s Creed 3 in a lot of ways. Rather than Connor, you’re Edward Kenway, a freewheeling pirate, in an alliance of convenience with the assassins. After accidentally getting involved in the covert war between Assassins and Templars, you’re set on a treasure hunt that lasts years, and leads you down a trail following clues left by the progenitors that created humanity. It’s a much lighter story than Connor’s, more fit for adventure, and the game wears it well.

The game is split pretty evenly into two parts. On land, you’re looking at the old traditions of Assassin’s Creed, handled halfheartedly. There’s plenty to collect, and beautiful environments to run, jump, and climb around, but your enemies are profoundly dimwitted, and it seems like three quarters of the missions comes down to tailing someone through stalking zones and then murdering them. 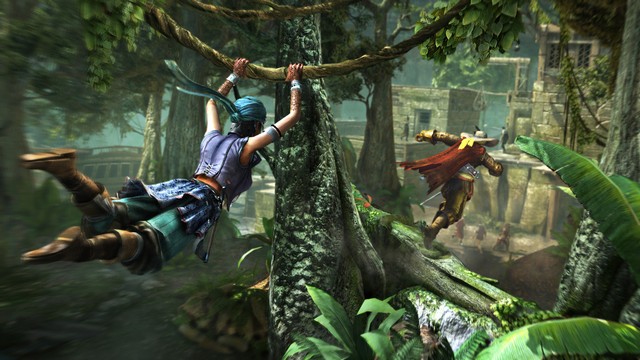 Stalking zones are just the worst. I feel like I didn’t hate them this much in Assassin’s Creed 3, but here, it feels like they’ve multiplied, infesting the world. Assassin’s Creed’s always been about social stealth, and hiding in plain sight, but with the advent of stalking zones, that’s been marginalized by the stealth shrubs. It undermines the reality of the world when walking up to some dense foliage and ducking into it makes people less suspicious of you. While sitting on benches or joining knots of people to shake suspicion made some sense, this just felt ridiculous, and the fact that it’s such a common part of the game does it no favors.  I’m sure that not everyone is as strongly inclined against the stalking zones as I am, but it just seemed like an absurd element, mostly used to justify some of the game’s worst missions, and it’s emphasized role in the stealth mechanics didn’t do anybody any favors.

So, that’s the land. Repetitive missions, awkward gameplay elements, and some nice environments. What about the sea?  The sea is great. Just the best. When you’re out on the high seas, scanning the horizons for targets laden down the cargo, your crew belting out sea shanties as you cut through the waves, it’s easy to forget all of the tedium that comes from trying to progress through the plot.

While the seagoing activities were practically an afterthought in Assassin’s Creed 3, in the fourth game, they become the backbone of what you’re doing. To get money, you go out and seize prizes, or you go to uncharted isles to look for buried treasure, or you go shark-hunting or whaling. To get around, you sail through storms and hostile waters. To learn the lay of the land, you assault fortresses and take control of them, giving you a home base in new parts of the ocean. Everything is much more tightly integrated with the gameplay now. 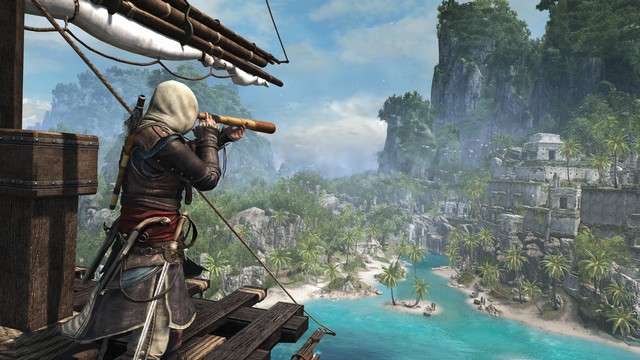 Assassin’s Creed IV: Black Flag is just beautiful. While I’m practically used to the absurd majesty of Assassin’s Creed’s cities, they’re still amazing. Even better, the ocean is an entirely new experience. Even on current-generation hardware, you’re struck with the awesome majesty of nature. When your crew goes from singing shanties to trying to hold on during a storm, when you see a waterspout stretching from the ocean to the sky, or a rogue wave filling your vision as you try to bear around and take it head on, it’s a whole new experience for the series, but one that’s equally as amazing as ever before.

I feel like there must be a contingent at Ubisoft that just wants to make these remarkable oceangoing adventures. There’s almost everything you need for an amazing reimagining of Sid Meyer’s Pirates in here, but the almost grudging Assassin’s Creed elements show a lack of care compared to the amazing seagoing adventures. It’s been a long time since I’ve seen a game so divided, where the priorities and attentions of the game’s developers seemed to be split so much between two almost entirely disconnected elements.

That said, when Assassin’s Creed IV: Black Flag is on, it’s really on. There’s a lot to like here, especially for PS3 gamers who are treated to an extra hour of exclusive content featuring Liberation heroine, Aveline.   For the player looking for a nautical game of piracy, there’s really nothing better out there. If you want something that reaches the heights of Assassin’s Creed 2: Brotherhood, then the game is starting to drift away, but if you just want to pillage and plunder, and have some fun running and jumping along the way, this is the best you’re likely to find. 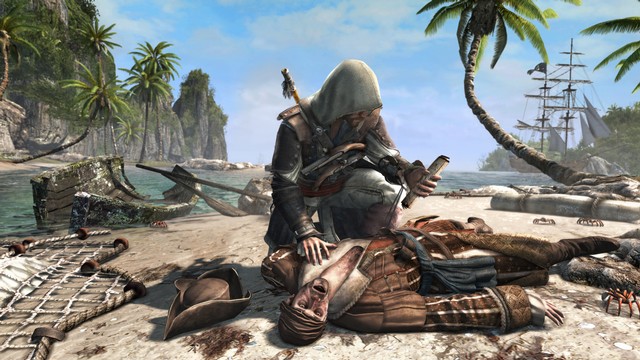 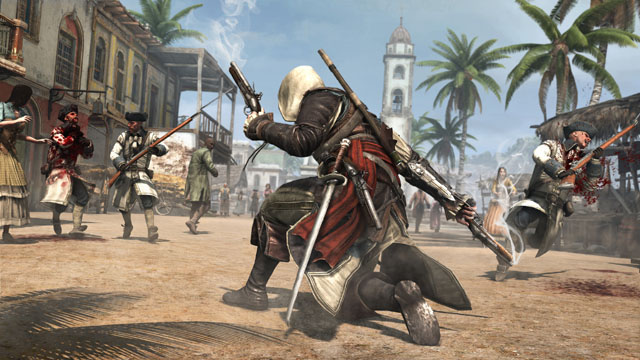 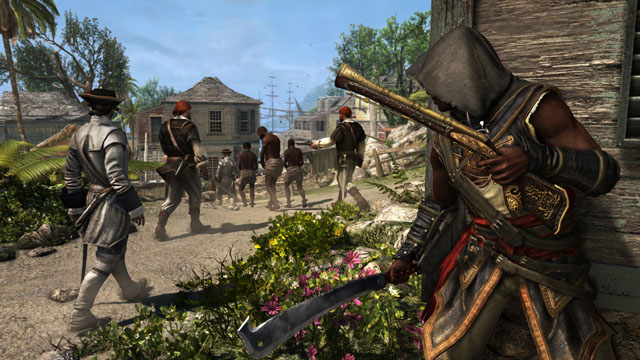 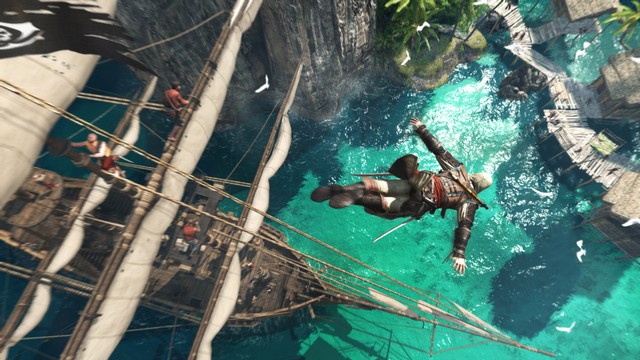 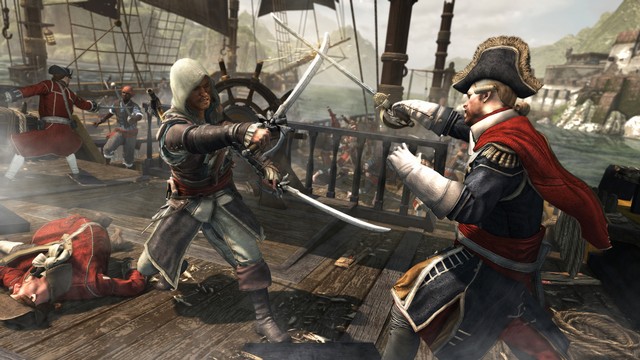 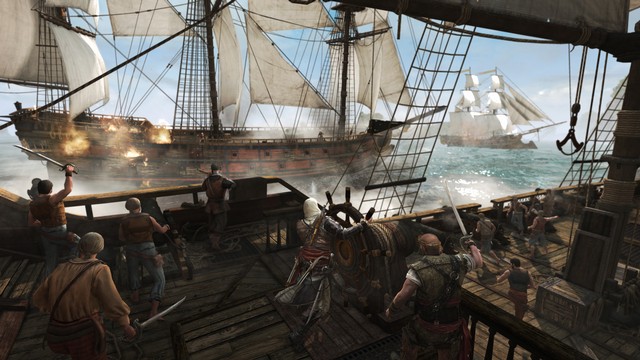 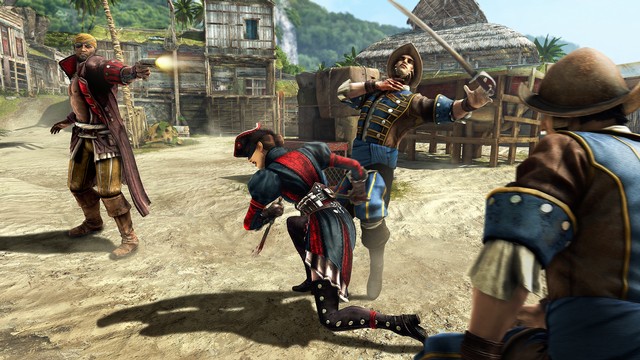 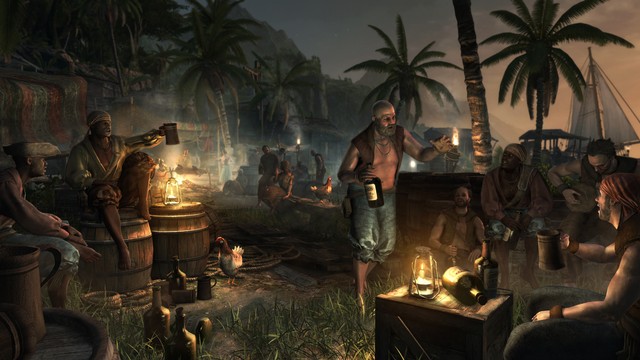 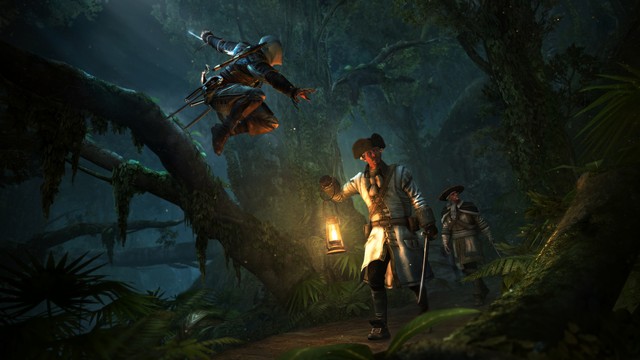 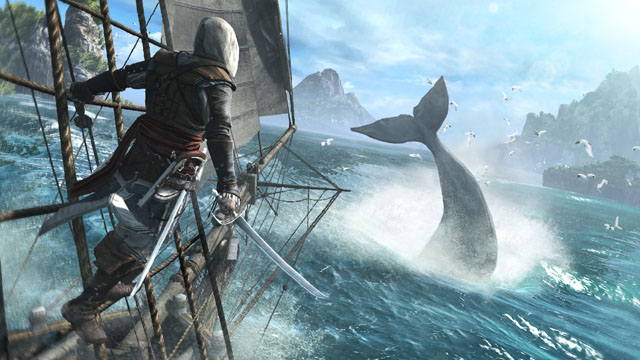 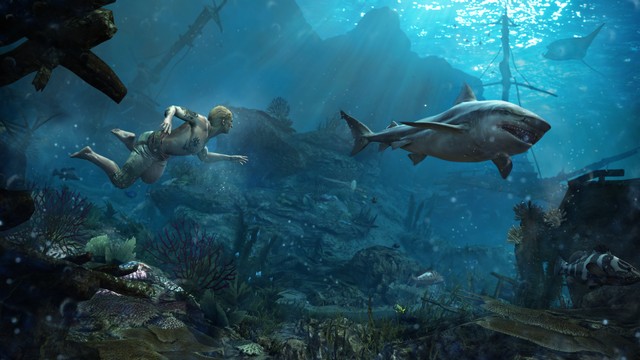 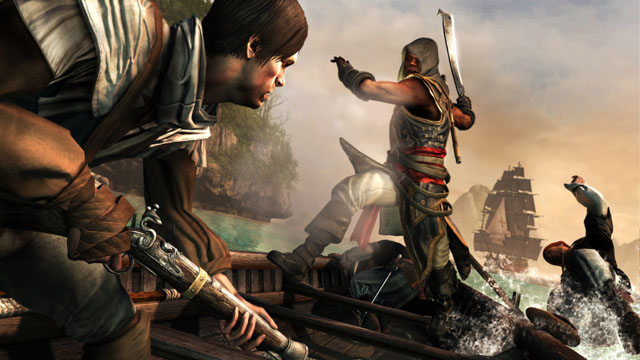 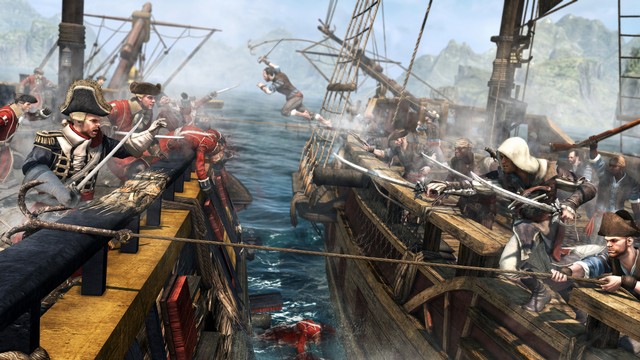 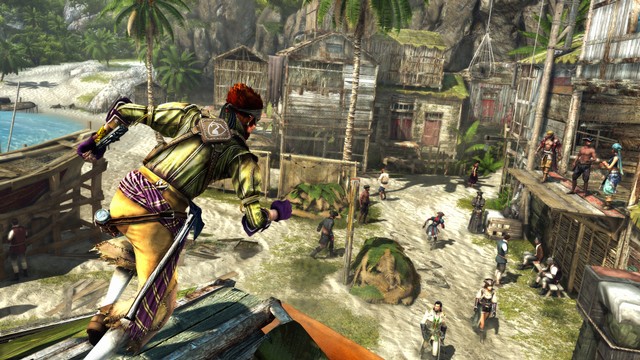 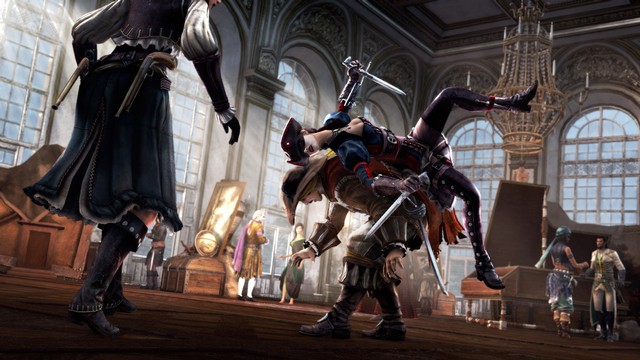 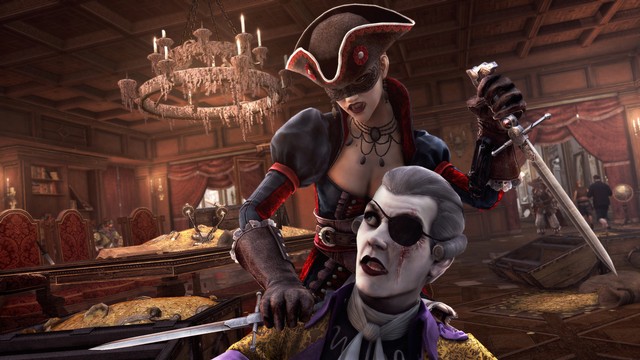 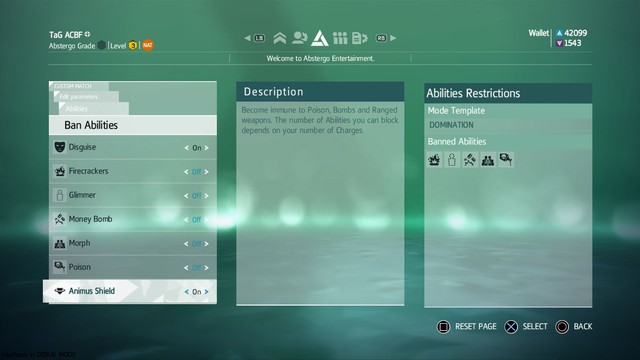 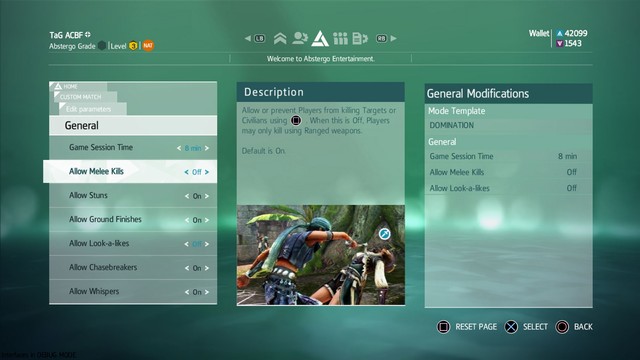 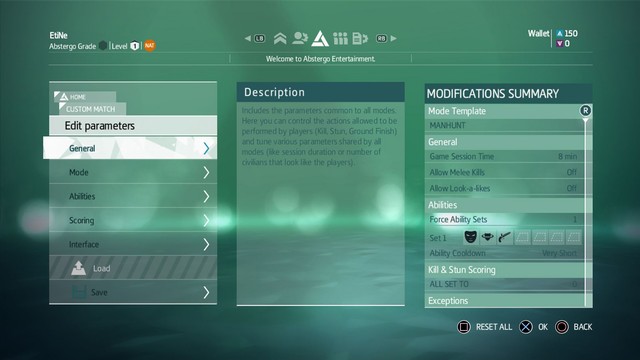 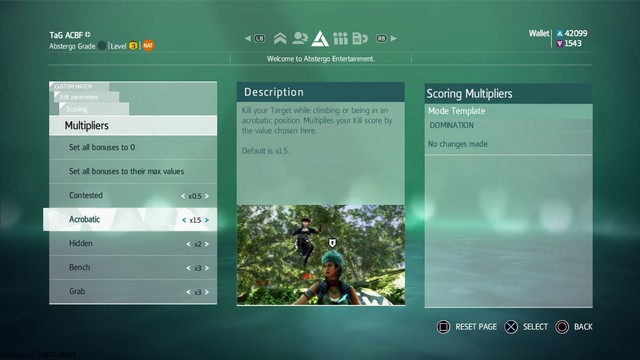