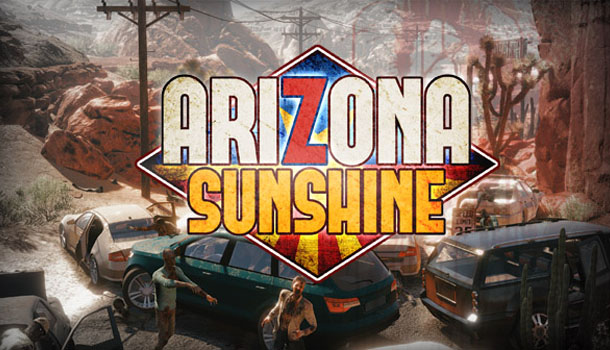 One of the most immersive, interactive, and realistic VR games to date.

I know what you VR gamers are thinking, “Oh no…another zombie shooter”, and you are right. The VR marketplace seems to be overflowing with undead these days, but Arizona Sunshine dares to defy the impossible odds by actually offering a fun, challenging, and totally addictive zombie shooter. Available for the Vive and Oculus Rift/Touch, Arizona Sunshine is an impressive survival game that puts you up against countless zombies in linear story mode for one, or bring along a friend and tackle the story in online co-op, or engage in the hoard mode that supports up to four players.

I tested the game on both the Vive and the Rift using the Steam version of the game. For Oculus owners, the game is also available on the Rift Marketplace and you are better off getting it there, as I’ll explain in a moment.   Arizona Sunshine is a standing experience that encourages moderate movement, so you’ll need at least a 4’x4’ play area otherwise you’ll be spamming the teleport move system to move small distances. The game makes expert use of motion controls, replicating your hands and any items you might pick-up, carry, or wield, like a variety of guns, grenades, and other items like ammo clips and tasty burgers hot off the grill. 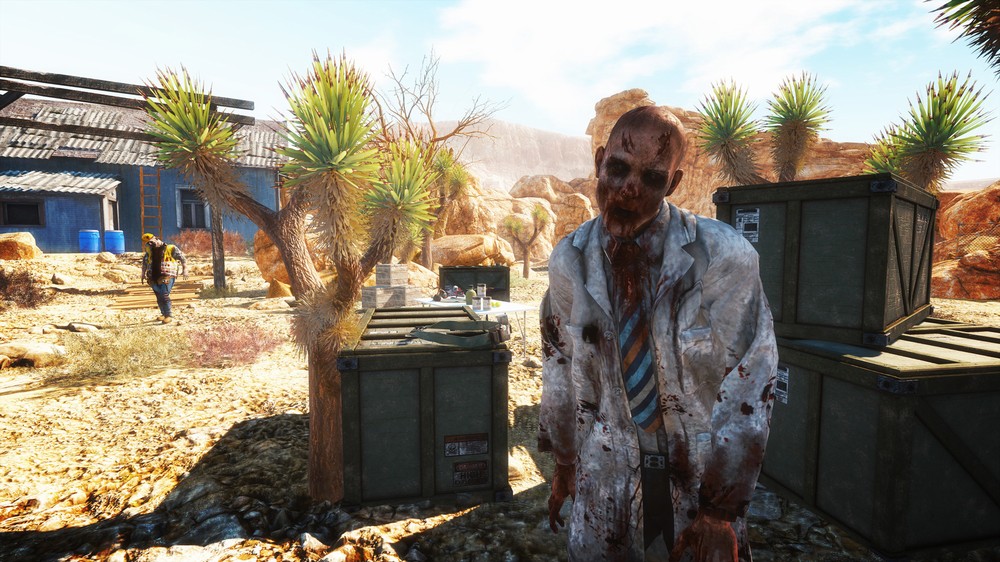 While the Steam version of Arizona Sunshine works perfectly fine with the Oculus Touch there is a major glitch with calibration; specifically your height. After hours of testing and swapping out Vive and Rift and talking with the developers it seems the Oculus wants to use the settings for SteamVR’s room-scale rather than the settings you configured when setting up the Touch in the Rift menus. This leads to some crazy height errors where your body clips through the floor/ground. The first time I played the floor was cutting me in half at my waist. After a forced recalibration it was cutting me off at the neck so my perspective was about 8” off the floor.   You can rerun the SteamVR calibration to override the Oculus settings at the risk of corrupting other games in your Oculus/Steam library. Bottom line; if you are playing with the Oculus Touch then it’s best to get the game from the Oculus store which will use only Oculus settings.

Once the game is up and running and your virtual feet are properly on the virtual floor you begin in a trailer with a few random objects you can toss around. At the end of the trailer is a game system where you can insert various cartridges, one of which lets you start a new game or continue an old one. Arizona Sunshine starts you off inside a cave as a new day of zombie-slaying dawns. Exiting the cave you can load up on ammo and munch a beef patty for some health before engaging in target practice with bottles. 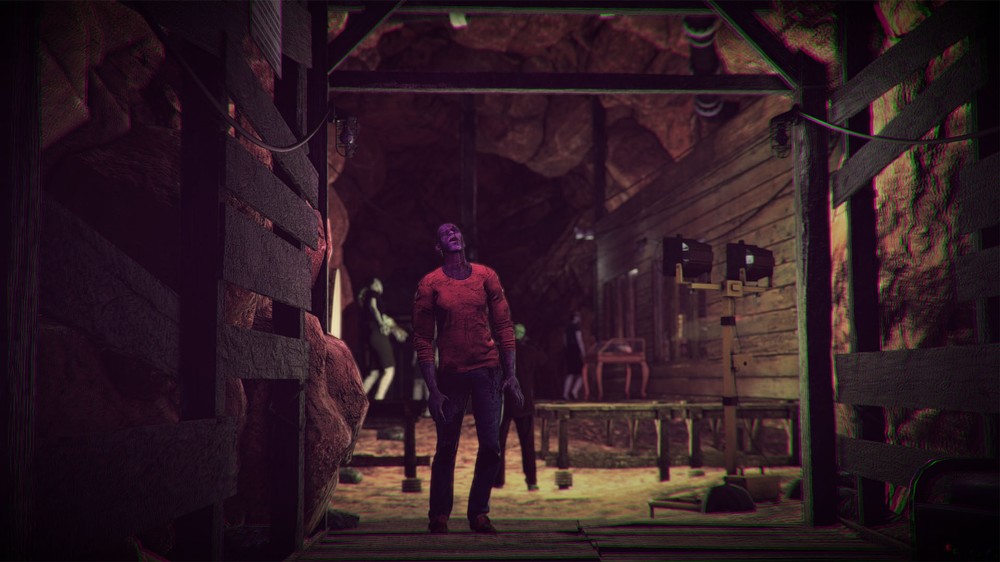 Naturally the gunfire attracts some nearby zombies and that’s when the fun begins. Arizona Sunshine has one of the most realistic and difficult shooting mechanics of any game I’ve ever played. First, there is no targeting reticle so you are really aiming down the site if you want those headshots. Ammo is scarce, so firing wildly from the hip at creatures that take numerous body shots to kill is not wise. If you want to survive you’ll want to become the master of the headshot. Also, there is no ammo counter on the screen so you either have to count your shots or be watchful of the slide locking in place indicating it’s time to eject the clip and load a fresh one. If you eject an empty clip it will vanish from the game but clips with rounds remaining stay on the ground so you can pick them up if (when) ammo gets low.

One of the best parts of Arizona Sunshine is the realistic movements required to interact with the world. If you want to eat a burger simply grab it and raise it up toward your real-world head. If you want to take ammo pick it up and move it toward your waist – same motion to reload gun. Grenades are stored on your chest for easy access to grab, pull the pin, and throw. Locomotion is handled with the tried and true teleport system, which some may hate but I found works particularly well in this game. It allowed for fast movement and retreat when overwhelmed and an easy way to position behind cover to drop some zombies.

The game is super-challenging in that ammo is very limited forcing you to search everywhere and everything for new guns and ammo. Early on you’ll be moving down a desert highway with dozens of abandoned cars that you can search by opening doors and trunks, all the while fighting off waves of recurring zombies. My biggest complaint with the entire game is the limited checkpoints. You can quite literally spend 30+ minutes meticulously searching for ammo and killing dozens of zombies only to die and have to do it all over again. And since the zombies spawn at the same time and rush in mostly the same patterns, it can get frustratingly repetitive if you die a lot…and you will die…a lot.

The presentation is fantastic with colorful and detailed graphics that demand a beefy PC for best results. There is plenty of gore, blood splatter, and chunks of skull and brain matter exploding from your headshots. It’s like a super-saturated colorful version of The Walking Dead. There is even some good music and voice acting in the game. And if you thought things were dangerous during the day, just wait until the sun goes down or you find yourself in the claustrophobic confines of the Ol’ Dutchman Mine with nothing but a flashlight to light your way.

Arizona Sunshine is by far one of my favorite VR games. The 6-8 hour campaign is challenging and the online co-op is great if you want to share the scares and your loot. The hoard mode doesn’t seem to have a lot of people playing so it’s difficult to fill out a game, and the scores on the leaderboards seem untouchable at the moment, but even if you only play the single-player game you can easily get your money’s worth in what is certainly the most realistic VR zombie shooter currently available. 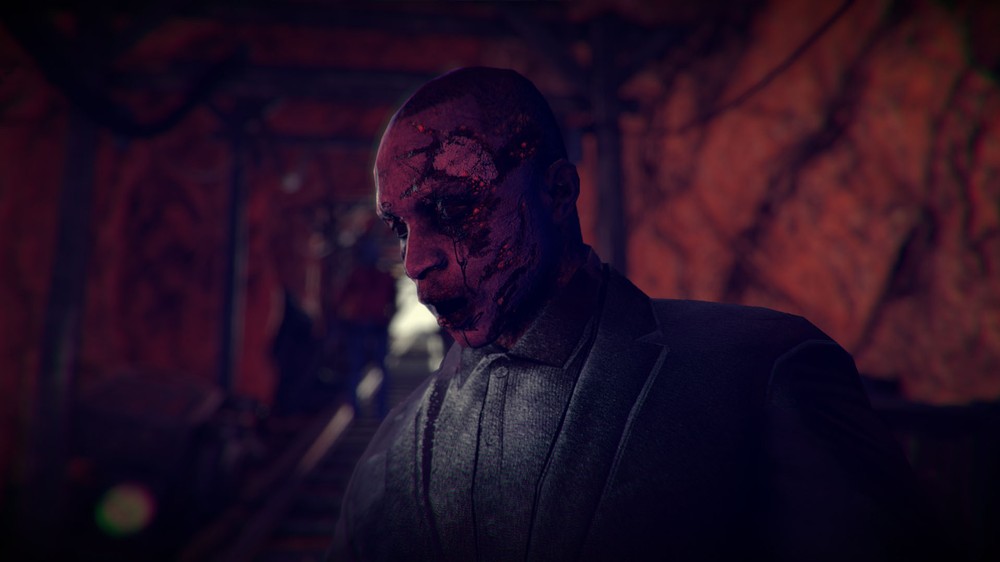 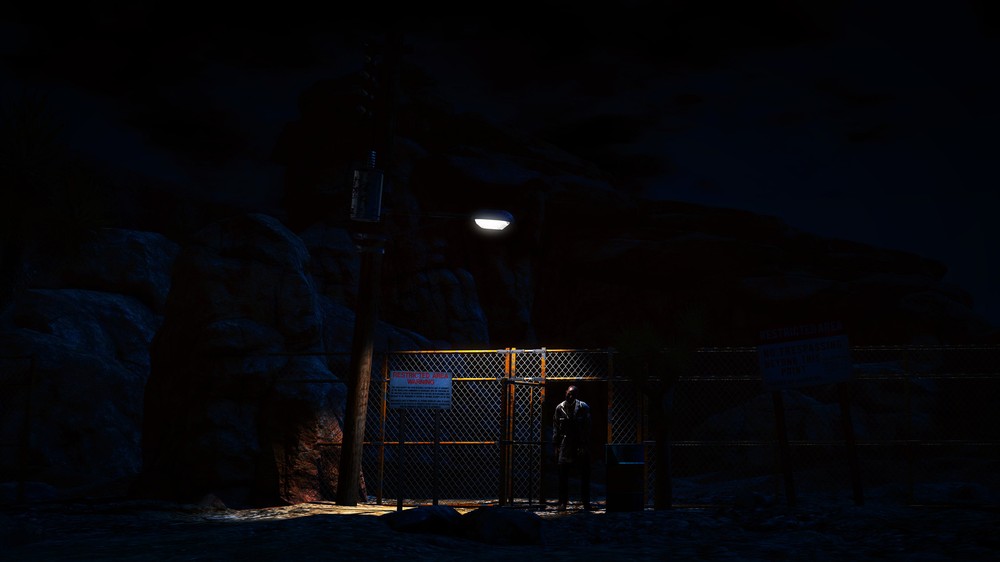