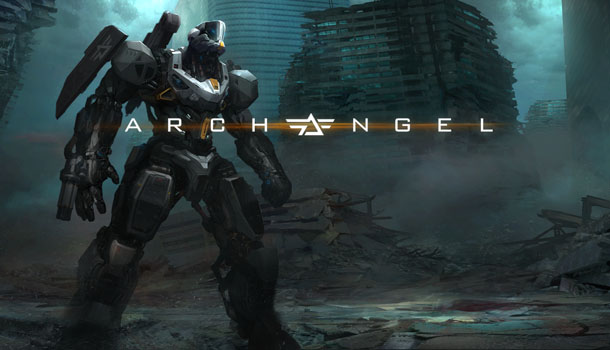 A couple of weeks ago I reviewed Archangel for the PSVR, and while the game was fun and engaging I couldn’t help but feel the limits of the PlayStation 4 were keeping this game from achieving the level of greatness lurking within. I’ve since had the chance to spend several hours playing Archangel on my PC on both the Vive and the Oculus Rift, and it probably comes as no surprise that the experience is indeed, much better, both graphically and even in gameplay.

I only played the intro and first mission using the Vive and found the motion controllers just a bit too cumbersome (and too similar to the PS Move) to really enjoy the game. I switched over to Oculus Rift with my Touch controllers and never looked back. As far as other differences between the two systems; I found none. The game looks identical on both headsets and plays the same, albeit with slightly more annoying button controls on the Vive, but there is no reason to score the game differently. If you have both VR systems you’ll likely prefer the Touch, but it’s all subjective.

Who doesn’t love giant robots? Whether they are MechWarriors, Armored Cores, or even something more than meets the eye you can’t deny the guilty pleasure of skyscraper-sized metal monstrosities wreaking havoc. Some robots are sentient while others are mere metal casings for their human pilots, as is the case in Archangel, a fantastic new cinematic arcade shooter that perfectly captures the feeling of being in the cockpit of a giant mech. 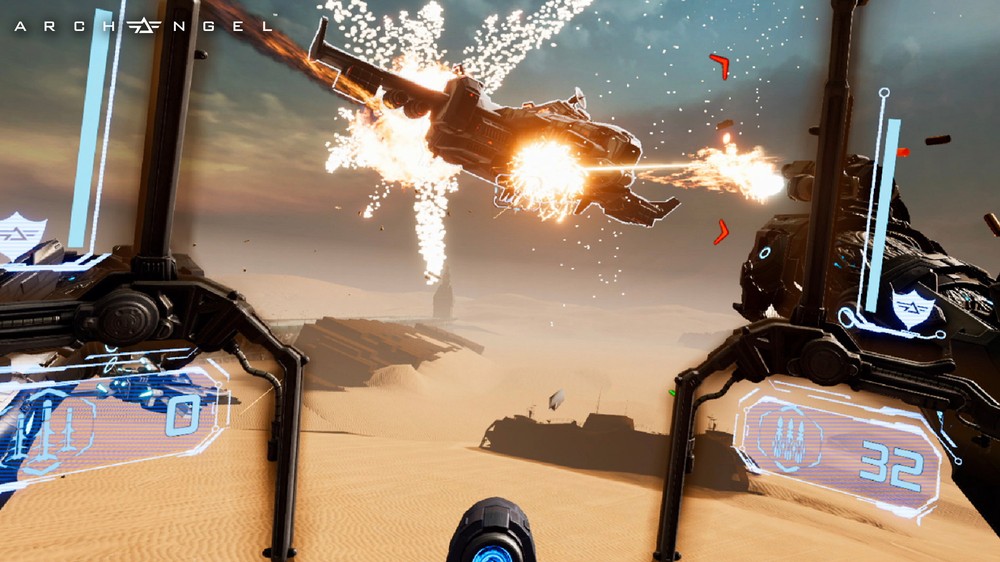 I loved the immersion of Archangel; not just from the engaging storyline that is setup brilliantly with an opening train ride to work where you engage in idle chitchat with your son, but also the complete immersion afforded by VR. The entire opening sequence from the train to the boarding sequence of the giant robot, to the tutorial and ultimately the missions in the outside world never break the illusion that you are in control of a six-story death machine.

One element that took me by surprise was the option to pick your pilot gender; either Gabriel or Gabby. It seemed like such an insignificant option that, on the surface, only swaps out “dad” and “mom” references and a few personal pronouns, but for my PC review I decided to pick Gabby. I’m not sure if it was the voice acting or just the inherent nature of a mother-son bond, but the entire experience seemed to engage and bring me into the experience much more than when playing Gabe.

The tutorial teaches you the basics and additional mid-mission instructions will help you learn more advanced functions as new abilities and weapons become available. The tutorial ends with a surprise attack on my military base – not what you want on “bring your son to work day”. So you, in your experimental mech suit, and a few friends in various ships of their own set off to the futuristic wastelands of Chicago to deal with HUMNX, a large corporation that threatens the free world and now wants your new mech. 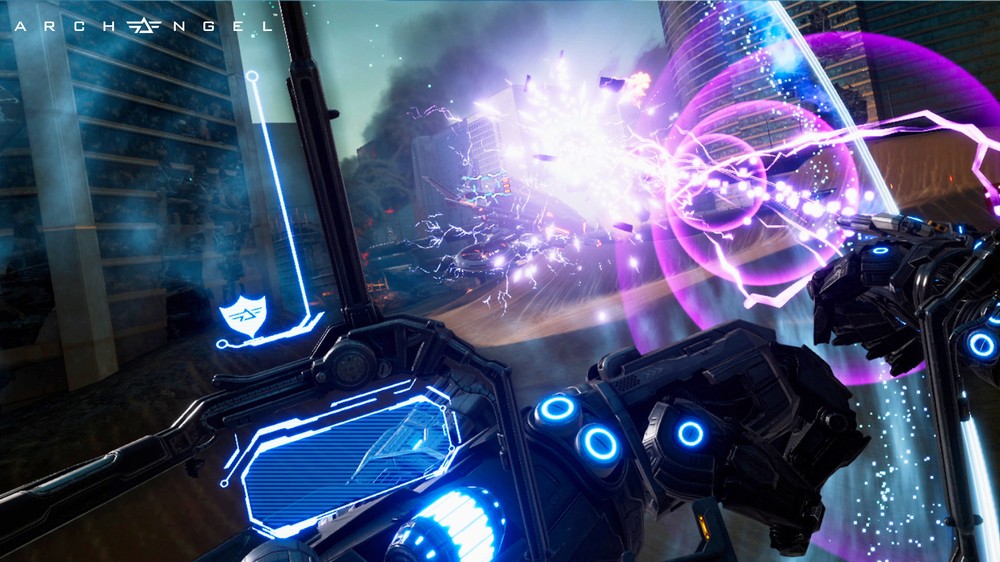 Gameplay is on-rails when it comes to movement speed and direction, which helps to keep things scripted as far as story and enemy encounters, giving the game a bit of arcade-like predictability, so when you die (and you will die) you know what to expect next time and can be ready for it. Your VR headset is directly linked to your head movement and view within the game while the Touch gives you responsive controls over each arm. Your right arm unleashes powerful machine-gun fire while your left arm can fire a powerful missile or be switched to multi-lock swarm missiles useful for smaller targets, especially flying ones. Each arm also has its own shield generator, which quickly becomes a key part of all the combat encounters.

Rather than full body shields, your mech has these giant circular “Captain America” style energy shields you can summon to deflect incoming fire. The duration of these shields can be upgraded but they are always temporary so you have to get the timing down on when to use one or both shields. It really becomes a strategic art to switch between left and right side protection based on enemy positions and movements. Your AI team is really good about calling out positions, so when you hear “enemy tanks at 2 o’clock” you can be ready to energize that right arm shield. And it gets really tricky when larger enemies start showing up, often in pairs, to attack from both sides. Shields offer a limited area and duration of protection, but you can swing your arm around to block specific attacks to certain areas or summon both to create overlapping protection. 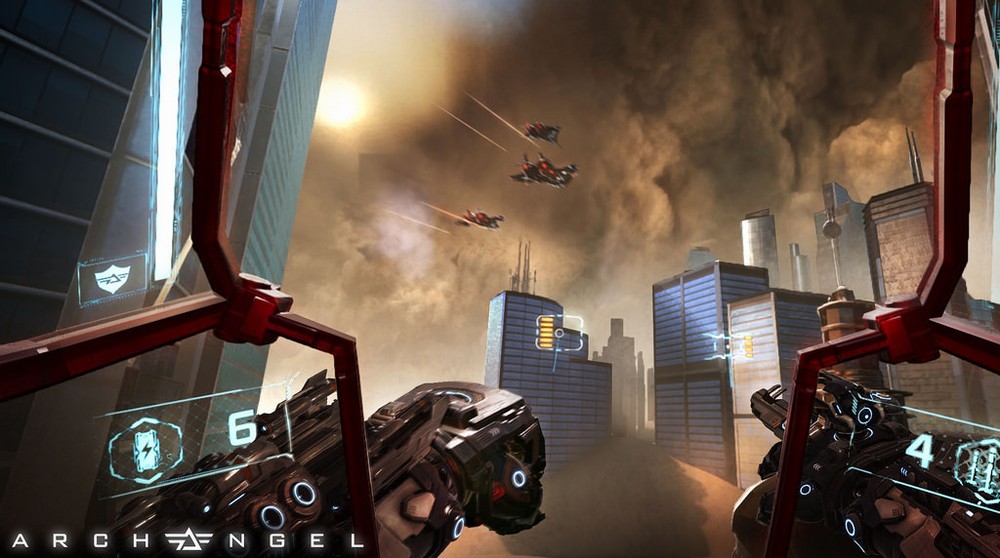 The real trick is to be blocking with one arm and shooting with the other, but since certain enemies go down better with certain weapons you have to be prepared to be block with one arm so you can keep the appropriate weapon arm free to aim. And mixed in to all of this is the occasional punching through bridges or shooting incoming shield-buster missiles out of the air. Missions are fairly lengthy and checkpoints are logically placed so you don’t have to repeat too much of a level, and as mentioned, there is an arcade predictability to the design that makes the game easier with each attempt. I would have enjoyed being able to call out for healing nanobot support rather than waiting for scripted moments of healing, but if you do have to reload at a checkpoint you come back with full health.

Between missions you will have the chance to talk with your squad mates as well as your mech AI for more insight and relevant story background, but more importantly, this is the time to upgrade your mech’s weapons, armor, and shield capabilities to meet the demands of the increasing challenges of future missions. There are all sorts of thoughtfully designed upgrades that allow you to tailor the game to your personal playstyle. 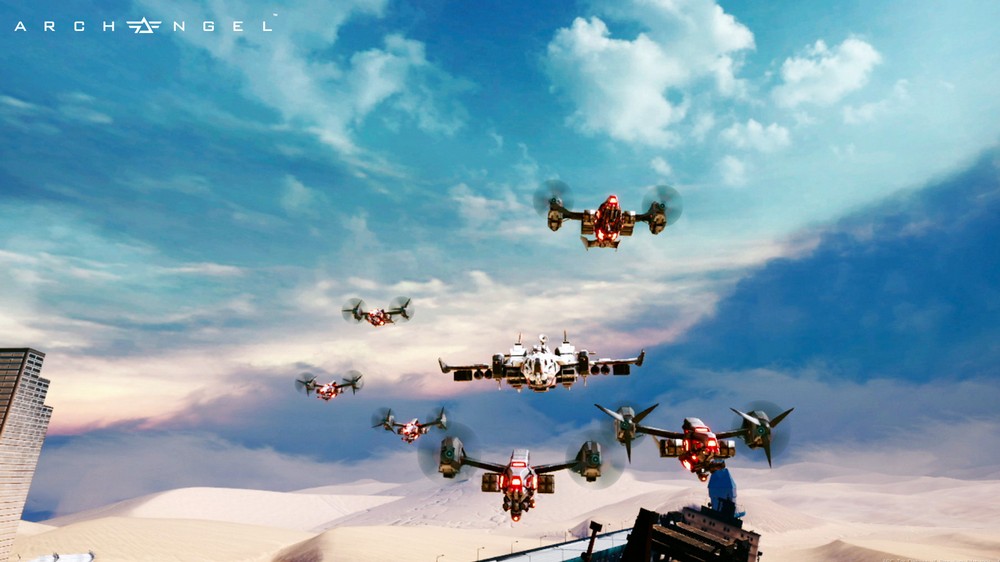 The graphics for Archangel on PC are outstanding, far superior to the PSVR, so much better in fact that it actually improves the gameplay. Enemies and environments are rendered with much greater detail and revealed at greater distances. The HUD and targeting overlays are now crisp with smooth edges and no stair-stepping on straight angled lines. Even the cockpit interior seems to be rendered with much greater detail. The entire experience was fantastic, and since you are basically in a bubble turret with no movement control Archangel is virtually free of any VR sickness.

Another factor that makes the PC version better than the PSVR are the controls. The PSVR has always had some level of tracking issues, especially when compared to the super-precise tracking of the Vive and the Touch. Your level of connection to the mech is impressive and immersive as you move your arms around in real life to swing your shield and aim your weapons in the game. I was having difficulty snatching the nano canisters from the air on the PSVR, but with pinpoint precision I never missed a single catch using the Touch, and even hitting flying targets with my machine gun as a breeze. PC is definitely the way to go with this multi-platform release, and while Touch and Vive offer the same quality of controls, Touch users will find their experience more realistic and comfortable during extended play sessions. 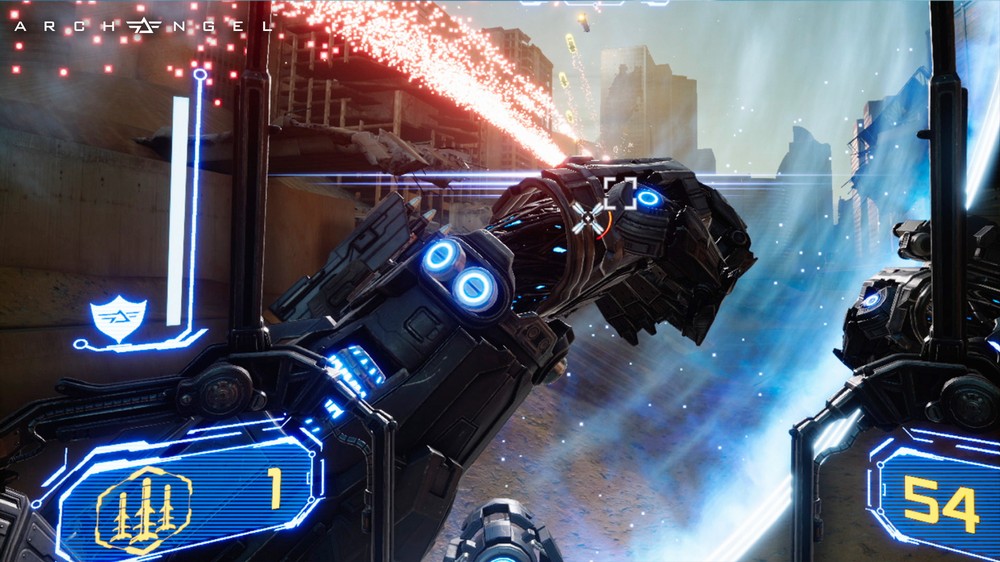 I’m sure many will argue that the whole “on-rails” element detracts from the overall game, but honestly, I think it adds to it. The combat is complex and challenging enough on its own. If I had to worry about moving too my head would explode. Archangel offers a compelling story, and an amazing level of visual detail and quality; especially in the mech design. I kept switching weapons just to watch the realistic mechanical design of my robot arm. While the apocalyptic level designs are admittedly bland and even repetitive at times, once the enemies show up you won’t have time to complain.

With the exception of some crazy difficulty spikes peppered throughout the 3-5 hour game Archangel is a near-flawless experience, powerfully immersive and totally entertaining. It makes great use of VR tech to put you in the cockpit of a giant mech for an epic revenge story, and with great controls and a surprisingly deep upgrade system, somehow blurs the lines of a theme park ride with a traditional giant robot game resulting in a shooter no VR owners should miss.