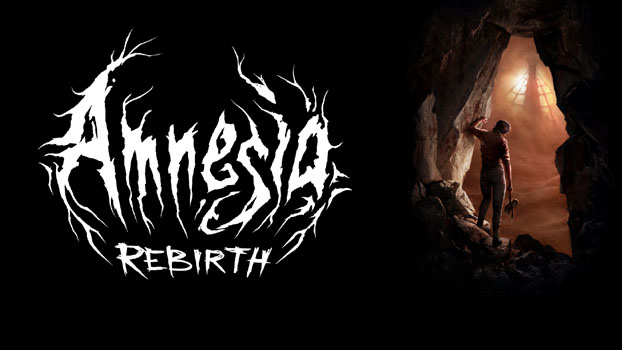 Enjoyable while playing but forgettable the moment you stop.

I love horror games but I never got into the Amnesia series for some reason.  I did play The Dark Descent ten years ago, but I skipped A Machine for Pigs entirely three years later.  SOMA, in 2015, still holds top honors in my personal horror game hall of fame.  Frictional Games latest game is thankfully a direct sequel to Dark Descent; a game I finished but honestly can’t remember (no pun intended).  Thankfully, this sequel doesn’t require any prior knowledge of the earlier game, although I have a hunch there are numerous bits of lore and references that fans with better memories than me will appreciate.

Amnesia: Rebirth has a very distinct style, both in its visual storytelling through artistic story panels sketched on parchment and its unique fear mechanic that rewards you for staying in well-lit areas while penalizing you for straying into darkness or even making eye-contact with a monster or other horrific scenes, of which there are plenty.  If this game were in VR you’d spend most of it looking at your feet. 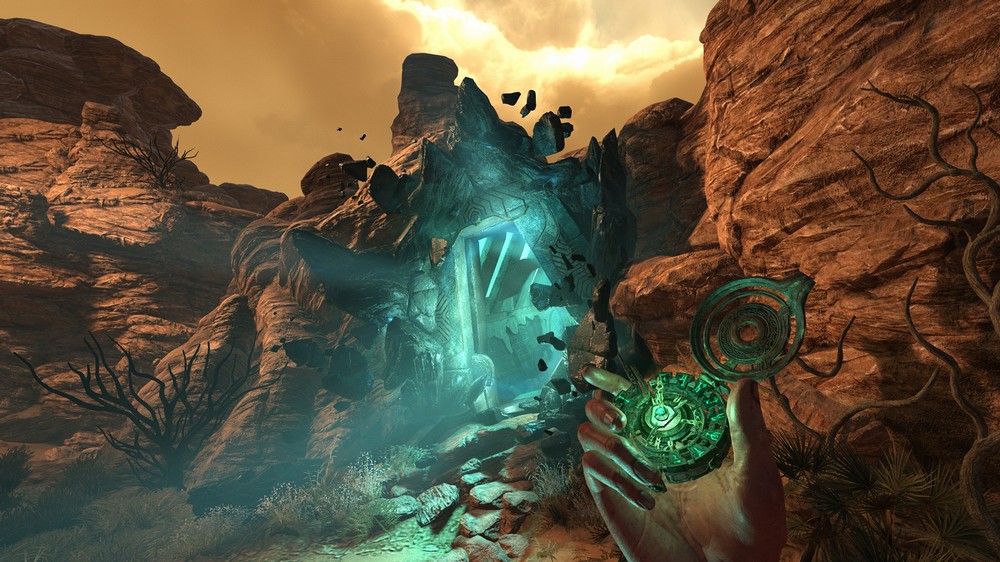 The game starts off with you, Tasi Trianon and your husband on a plane just before strange almost supernatural events cause your plane to crash in the Algeria desert.  When you awaken you find everyone onboard has vanished and you must set out across the desert to find out what happened.  Your trek quickly takes you to some strange caves with mysterious portals that you can activate with your wrist medallion/compass.  These portals not only allow you to pass through solid rock but also transport you to some alien-like other dimension where ancient beings are harvesting humans as crops, putting them in torture pods, and “milking” their fear as energy used to power their civilization and own immortality.

Using the portal device also causes jumps in time, and we quickly learn that Tasi is pregnant and gets more pregnant with each trip through the blue portal.  This plays an increasingly important role in both story and gameplay as you can actually check on and sooth the baby in your belly to reduce your fear level.  But the best way to stay sane and unafraid is to stay in the light and that is where Amnesia: Rebirth becomes obsessed with matches.  You can only carry ten at a time but you’d be surprised how abundant books of matches are, both in our world, the underworld, and even locked away inside containers found buried in ancient civilizations.  You can use these matches as short bursts of light or combine them with torches, sconces, fire pits, or anything else flammable to light up your surroundings.  Matches don’t last long and easily blow out if you run or walk into a windy area, but you also have an oil lamp to provide more reliable light as long as you keep a lot of oil handy. 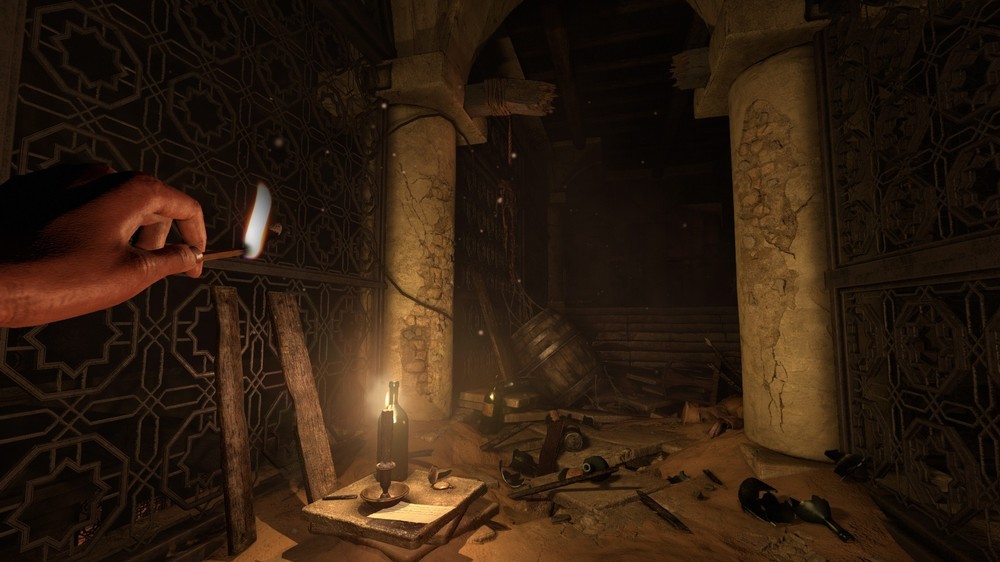 The game is a fairly linear adventure quest with clearly defined objectives dotted with terrifying encounters where you’re only option is to run and hide.  There are no weapons or fighting back in this game, which only heightens the terror and sense of helplessness.  There are numerous puzzles scattered about the levels, most of which are simple inventory quests made more difficult by getting lost/immersed in the environments and the constant stress of being stalked by the unknown.

I liked most of Amnesia: Rebirth despite its bat shit-crazy storyline that was nearly impossible to follow, especially in the first few hours when you are trying to grasp the shifting timelines.  I was generally just as confused as Tasi, which I suppose could have been intentional immersion.  There is a LOT of reading and narration, and story panels and you really can’t skip any of it or you might never know what’s going on before you get to the mind-bending finale.  It’s all archived in your journal if you did miss something and need to review.  There were great moments of stealth and sneaking past monsters in the dark, there were exciting chases and jaw-dropping plot reveals and even multiple endings – at least two that are worth reloading your final checkpoint and replaying to see.  You can’t really die during the game due to circumstances that will be explained at the end, but sometimes you will get captured and have to escape.  Either way, you always end up right back where you left off with only a few wasted minutes.  Expect 8-10 hours to complete the main game and there is a Custom Stories mode that allows further experimentation with custom Steam Workshop mods to extend the experience. 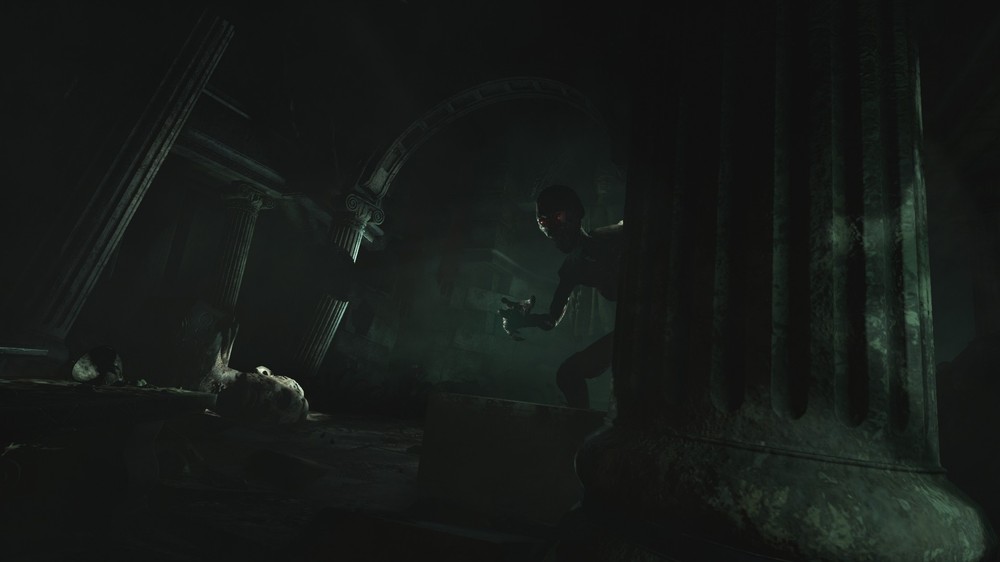 As far as presentation Amnesia: Rebirth is amazing with a great visual style, fantastic level design, textures, and of course…dynamic lighting and shadows.  You could feel the heat radiating from the desert and the rays of golden light beaming through the caverns were just as majestic as the mist-filled underworld city was terrifying, and some of the art for the story panels is worthy of being framed and hung on a wall.  Equally as awesome was the sound presentation with horrible and haunting effects coming at you in a terrifying 7.1 mix.  All of the voice acting was well done and there was a lot of it, so I thankfully didn’t have to read as many notes as I thought I would.  The soundtrack is emotional, suspenseful, and quite often just as spooky as the visuals.  All of these elements combined perfectly to create a general sense of discomfort if not outright terror for most of the game.

Fans of the franchise will certainly want to pick this up but personally, SOMA is still my favorite game in the Frictional catalog.  Amnesia: Rebirth had some cool moments of tension and suspense but no real fear that wasn’t a product of cheap jump scares and loud noises.  The broken timeline and sheer quantity of lore you are required to consume really slowed down the pacing of this already drawn-out adventure.  I had more of a sense of relief than satisfaction when it was all over; perhaps that was because I can’t relate to a pregnant mom as a main character or perhaps I needed more context from Dark Descent.   I enjoyed my time with Amnesia: Rebirth, but for me this game will be just as forgettable as the last. 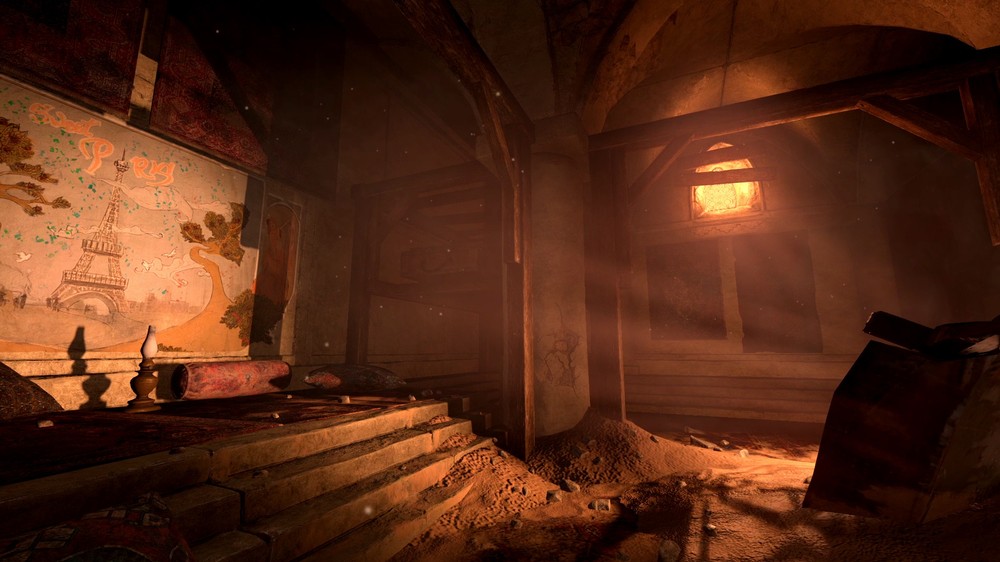 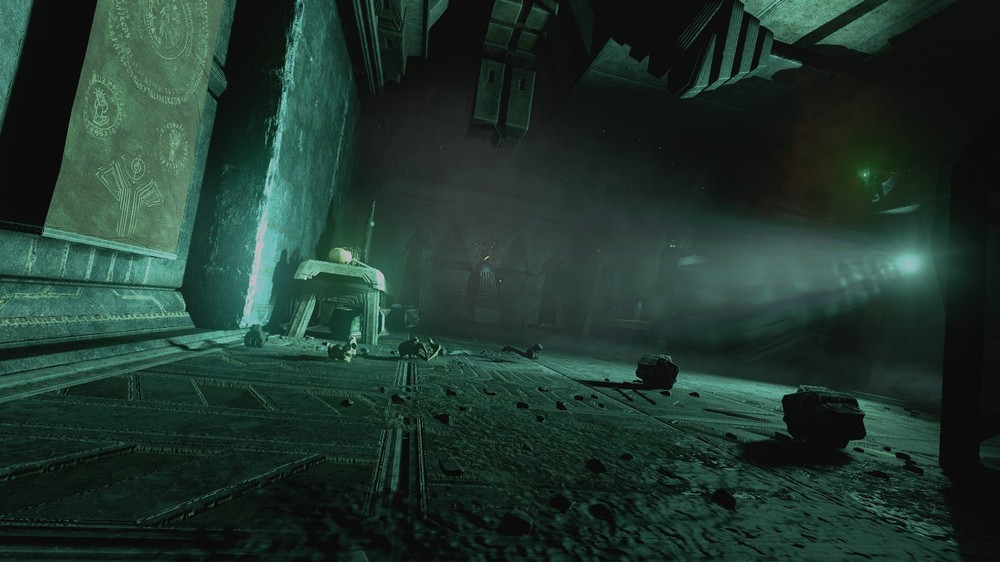