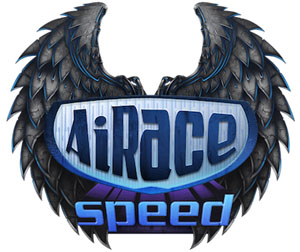 AiRace Speed is a pretty cool time trial racer with room to grow.

AiRace Speed is the third game in a series of Wipeout-style racing games with the small exception that there are no other racers and no weapons. So consider this more of a time trial or speed run game since the only person you’ll be “racing” is yourself. Not that this is a bad thing mind you; the claustrophobic levels with narrow winding passages and tubes not much wider than your ship are hard enough to navigate in solitude. I can only imagine how much harder this game would be with a pack of ships all fighting for first place.

There are 18 tracks and for the most part your goal is to complete the two or three laps in the shortest time possible. This means using the turbo button a lot and doing your best to stay off the walls or smash into any obstacles. Destruction will simply reset you on the track back at the last checkpoint with enough of a time loss that you may as well start the entire race over. Instead of multiple laps, endurance races consist of one long track divided into several stages. If you crash in one of these races you lose one of your three lives and spawn back at the start of the last stage. It’s quite easy for careless racers to actually fail these races, so you might want to approach these with a bit more caution. 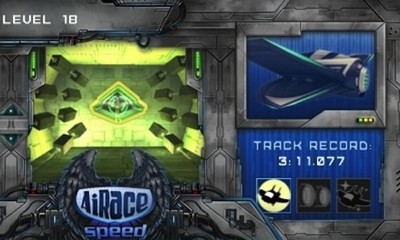 Your performance in each race rewards you with bronze, silver, and gold medals, and while these are great visual references for how well you have raced in completed levels, they also serve as “currency” to unlock future tracks. The tracks in AiRace Speed are divided into tiers with the first few tracks being unlocked by earning bronze medals in the earlier races, but later on you will need to be earning silver and eventually gold medals to unlock the middle and final sets of tracks. While this may seem restrictive at first, it’s actually a nice way to manage your own skill progression because chances are, if you can’t earn gold medals in the earlier races you definitely don’t have the skills required for the gold medal tracks near the end.

AiRace Speed offers two ways to control your race craft; some very smooth analog stick and button controls and the obligatory touchscreen interface that just doesn’t work as well as it should. Using the stylus was a bit laggy and when racing down these tight shafts and tunnels the last thing you want is an unresponsive ship. The physical controls were much better and offered the most consistent method of control required for winning the gold. 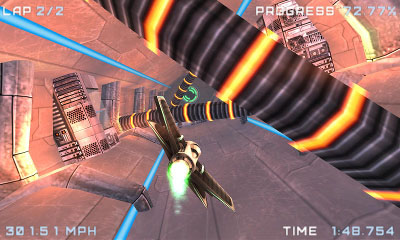 You actually do get better the more you play AiRace Speed, which is a nice testament to the level of progression designed into the game and the slowly evolving and more challenging track design. Early on you can ride that nitro button all the way to the finish line, but in later tracks you will need to actually use the brake and get ready for sharp turns and deadly obstacles. 18 tracks might not sound like a lot, especially when races are only a few minutes in length, but there is some incentive for replay. Most games rely on the player’s compulsory quest for gold to keep them coming back, but AiRace Speed demands those gold medals if you want to fully explore all this game has to offer. Yes, it might boil down to grinding for gold, but you will be improving your racing skills and track knowledge along the way.

AiRace Speed is only $5 in the Nintendo eShop, and you will easily get your money’s worth. There is some great racing action, energetic music, and some cool, albeit simple, graphics. The 3D effect is pretty amazing, but I ultimately had to turn it off almost immediately for the simple fact that if you are playing this game and holding your 3DS you instinctively start moving the system from side to side as you fly through the levels, which instantly breaks the 3D effect. Unless you are playing with your 3DS firmly resting on a table or your lap don’t even strain your eyes.

AiRace Speed is a pretty cool time trial racer that I hope actually evolves to include other racers and possibly even some online racing modes. With just a bit more work this could easily be the Wipeout or F-Zero the 3DS has been needing, and gamers have been wanting. 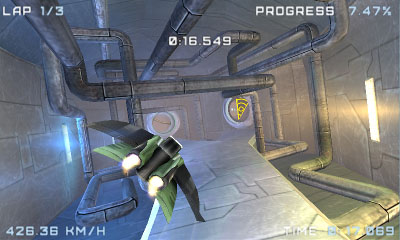 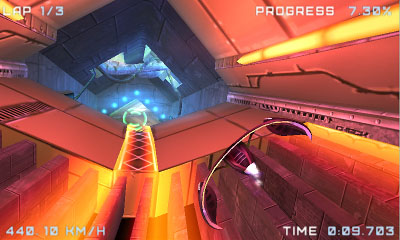 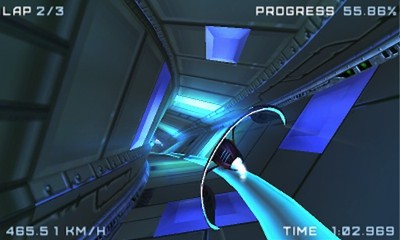 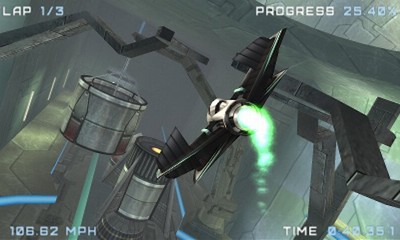 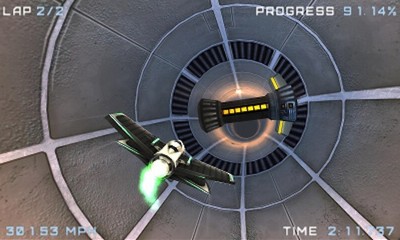