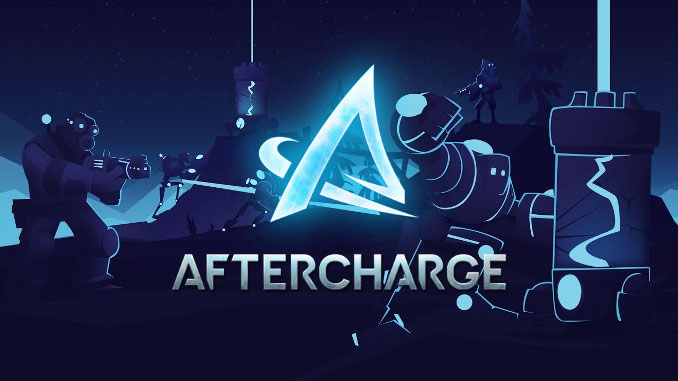 I’m not a big fan of multiplayer games, but Aftercharge may have just converted me.  This insanely fun, action-packed, 3v3 shooter is as much fun to play as it is to look at with a visual style that evokes Borderlands combined with fast-paced, short skirmishes that demand teamwork and strategy.  It all kicks off with a brilliantly designed tutorial that teaches you everything you need to know about the environments and the two factions you’ll be playing.

The premise is simple.  You’ll be playing matches on a relatively small yet tactically complex battlefield where six Extractors are scattered about.  There are two teams; the Workonics, robots bent on destroying all the Extractors, and the Enforcers, humanoids with weapons charged with protecting the Extractors and defeating the Workonics.  Each match consists of two rounds where you play on both sides of the battle, allowing you to experience the nuances of each. 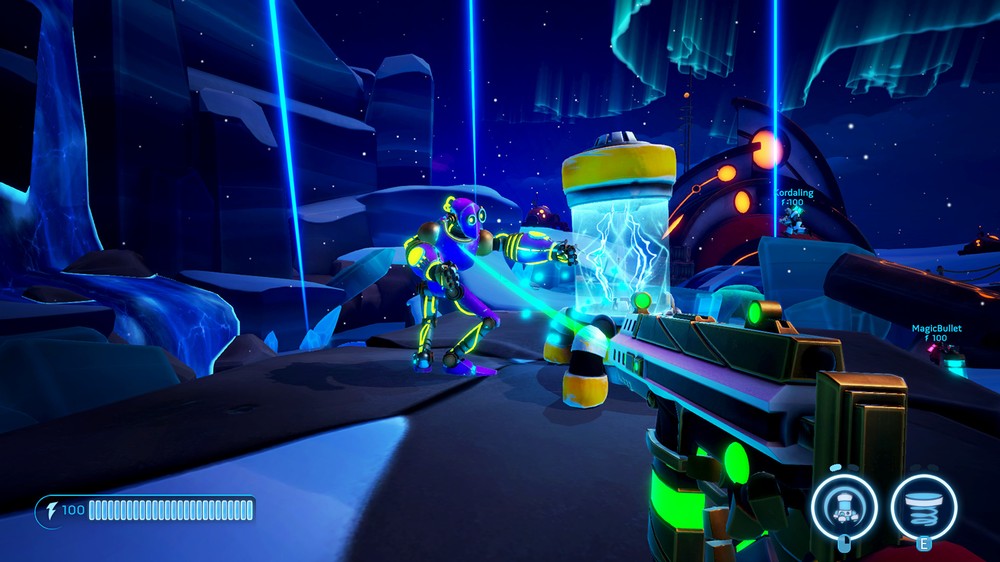 Workonics use stealth tactics to achieve their goals.  Their invisibility cloak allows them to sneak around the battlefield finding unguarded Extractors and punching them until destroyed.  They have no weapons and if detected must simply run away and hide until their cloak engages.  If disabled they can be healed by their teammates, but if all three Workonics should get disabled at once it’s game over.

Conversely, the Enforcers have an impressive assortment of weapons and gadgets they can use to detect and disable the Workonics; the most basic being the Rayvealer which looks a bit like the plasma gun from Ghostbusters.  This will disable a Workonic’s cloaking device once you get close enough, and a flashing light on your weapon will indicate when you are closing in on the enemy.  Enforcers can set traps and setup shield barriers, which won’t keep the Workonics out for long, but help to locate the robots when shields start getting punched. 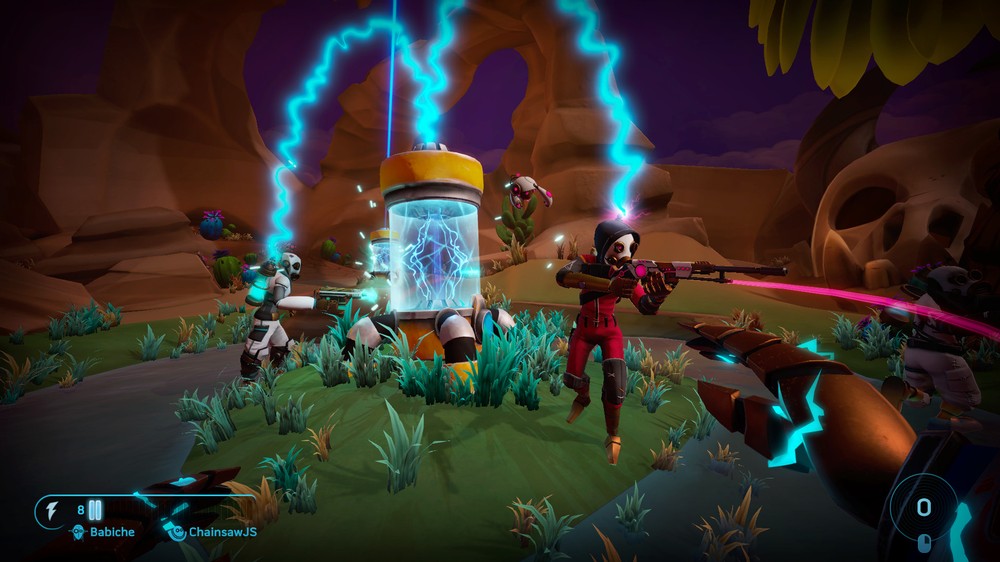 At first it seemed the two teams weren’t balanced and the Workonics almost always won, but the more you play the more you figure out team tactics and various strategies like standing guard over a fallen robot in case his teammates show up to heal him.  Enforcers recharge their weapons using Extractors so the more the Workonics destroy the more limited reload points Enforcers have.  Often battles will devolve into the Enforcers guarding the last one or two Extractors while Workonics try to bait them into leaving their post.  Teamwork is crucial, especially for the Workonics who must keep healing their teammates without going down themselves.

Matches are short with each round usually lasting only a few minutes.  I had one match where all three Workonics were taking out within 30 seconds, but that is rare.  I enjoyed the fact that you play as each faction so you get to experience both sides of the battle and the unique tactics required for each team.  As mentioned, teamwork is essential yet nobody seemed to be using the built-in voice chat, but the game still played remarkably well using visual cues on where to go to attack and defend. 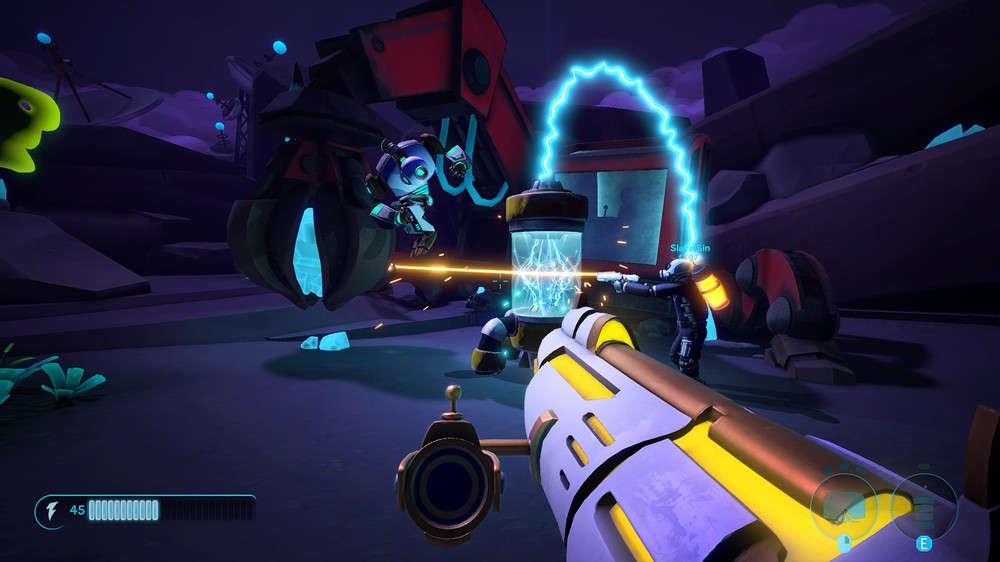 Visually, the game is delightful with bold colors and a charming design to both environments and especially the character models that look like they are on vacation from the Borderlands franchise.  Workonics have that Big Hero 6 aesthetic while the Enforcers have these mysterious masks and cloaks.  There are plenty of characters to choose from as well as a vast assortment of unlockable content you’ll earn as you collect XP and level-up.  The audio is fantastic with fun music, futuristic sound effects, and some good voice work during the tutorial.

There are three game modes, only two of which were available at the time of this review.  Quickplay will toss you into a 3v3 match with anyone else looking for a game.  I was impressed with the matchmaking, and it never took more than a minute to get six people gathered for a match.  Bot Match is basically the same thing only you are playing with bots rather than real people; a great place to practice before playing with others.  The Competitive multiplayer is “coming soon” and I will make any necessary additions to this review if warranted.  It is definitely worth noting that the game is cross-play compatible with Xbox One gamers, which only makes the community and matchmaking that much more robust. 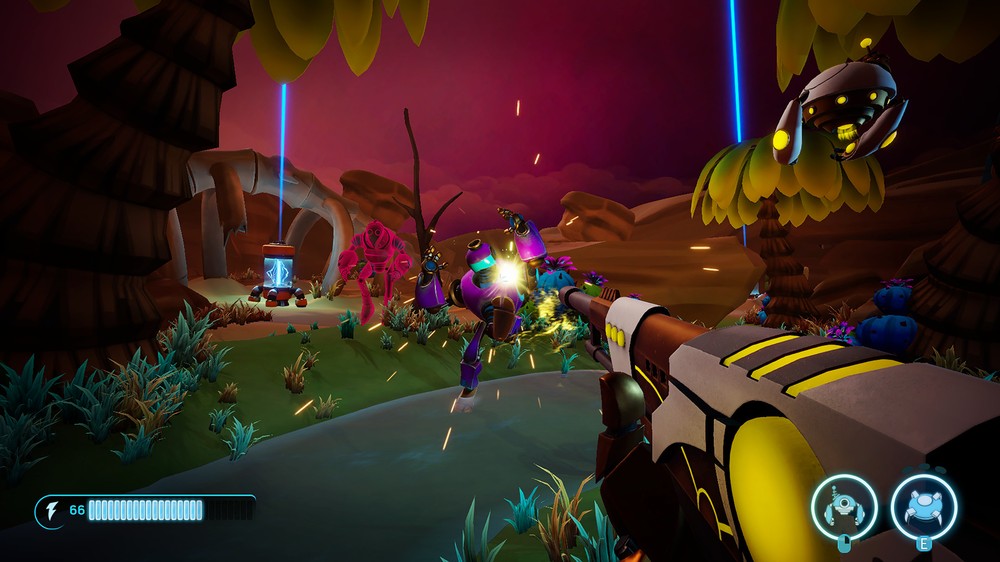 Aftercharge was the perfect game to kick off 2019.  As I mentioned, other than Rocket League I don’t really enjoy playing online competitive games, but the unique two-side dynamic to the gameplay combined with the fast and accessible matchmaking and convenient match lengths has totally sucked me in.  Everything from the presentation to the controls to the highly addictive gameplay makes this one of the first must-play games of 2019.

1
878
The Walking Dead: Saints & Sinners Review – Oculus Quest
2
751
CRASH BANDICOOT 4: IT’S ABOUT TIME IS AVAILABLE NOW
3
751
The Falconeer First-Look Preview – PC
4
751
Metamorphosis is 33% Off on Steam!
5
750
Take to the Skies and Choose a Side in the New Trailer for Next Generation Air Com...
6
750
Frictional Games Shows Off First Gameplay Footage of Amnesia: Rebirth
7
750
Join the Galaxy’s Finest as Star Wars™: Squadrons Soars Into Homes Today
8
750
Werewolf: The Apocalypse – Heart of the Forest launches on October the 13th
9
750
Synth Riders Celebrates Anniversary with a Month Full of Treats and an Oculus Ques...
10
750
Worm Jazz Review – PC
All Original Content on Game Chronicles is Copyright (c) 2002-2020
Sinjin Solves Walkthroughs Copyright (c) 1996-2020 by Mark Smith