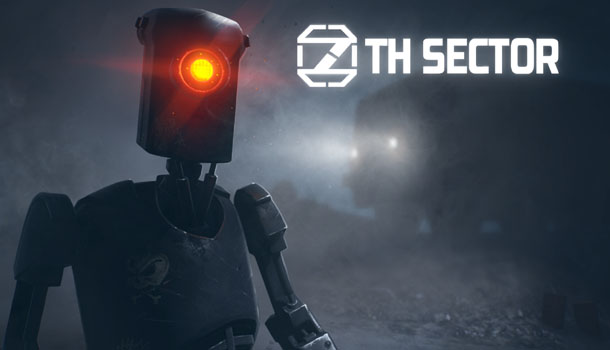 One of the most remarkable games I’ve played this generation.

This is going to be one of the more challenging reviews I’ve done in a while; two versions of the same game with release dates nearly a year apart.   7th Sector is releasing today on the Xbox One, but it also released last March on PC. It slipped under our radar back then but we were fortunate enough to finally obtain a PC code along with the new Xbox One release, so I’ll take this opportunity to review both and maybe make a few comparisons along the way.

7th Sector is remarkable on multiple levels, featuring some of the most unique game design elements, stunning artwork, engaging audio and immersive soundtrack, and a collection of the most fiendish puzzles to bake your noodle since Myst, and for the most part this was created by one person. 7th Sector is all about discovery. There is no setup, no story, no purpose; you begin trapped inside a TV, escaping into the wiring as a singular pulse of sentient energy traveling across cables that snake their way through a gorgeous dystopian cyberpunk world. 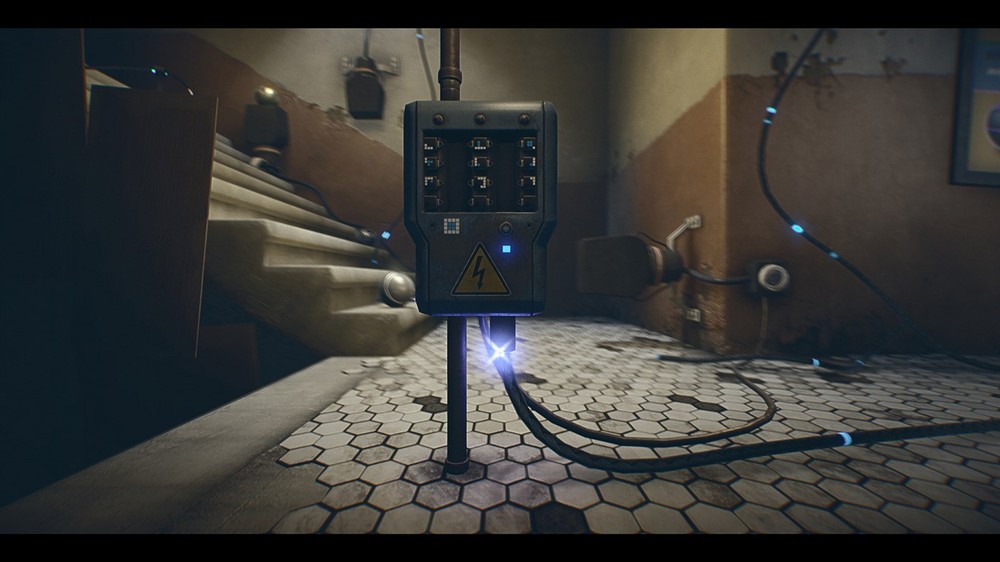 By design the game is quite linear despite it having four unique endings. You’ll guide your spark through detailed environments, often sparking across gaps in wires or even jumping to a new cable to take a different path often leading to one of numerous puzzles that range from difficult to impossibly hard. This is one of the few games where I was actively taking notes and using my phone’s camera to take pictures of the screen to solve puzzles. To keep things fresh your sentient spark will inhabit multiple forms such as a robotic attack dog, a flying drone, a metallic sphere, and others, allowing for even more unique ways to explore and discover new areas and interactive puzzles.

You’ll pass through numerous checkpoints along the way, upload data at terminals scattered about the game, and even check your email to receive mission updates of a sort, but your only real objective is to just keep moving, solving puzzles, and reach the end of whatever lies ahead.   The puzzles are the core of 7th Sector’s game design with creative brainteasers that cover math, audio, logic, switches, lights and mirrors, and even a bit of code hacking. Often, even knowing where to go or what to do or just figuring out the rules of a particular puzzles can be unclear, left to trial and error and perhaps a bit of frustration. The game offers little if anything in the way of clues or hints and I had no guilt when “forced” to seek out online guidance. 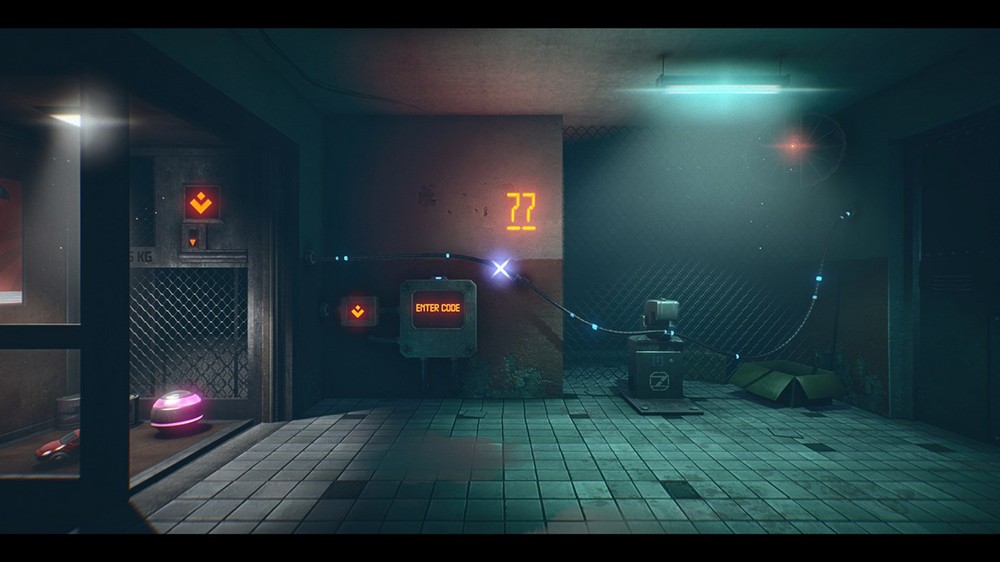 For those of you that have played games like LIMBO and INSIDE, you’ll have a small notion of how this game looks and plays but only on the most basic of presentation and design levels. Everything about 7th Sector from its stunning design, lighting, textures, and brutal puzzles sets this apart from anything else in the genre. It truly is one of the most remarkable games I’ve played this generation.

So how about platform specifics? I played the entire game on PC over the course of three days (nine hours in total) and 7th Sector could easily be mistaken for a AAA game. I was continuously blown away as I entered each new area or assumed a new form, which almost felt like I was playing a new game; and this happens several times. The level of detail in the backgrounds combined with lighting and shadows and detailed textures all playing out at 4K resolution on the PC is breathtaking. Things were a bit different on the Xbox One X. The main menu is this display that shows real-time info like the time and date and also video resolution which was only 1080p. My TV was displaying a 4K image so I can only assume the game is rendering at 1080p and upscaling to 4K which did result in some jagged edges and excessive blurriness. A good example is early in the game when you need to find a code written on a mirror revealed under black light. That code is perfectly legible on the PC but is a fuzzy mess on the Xbox. The Xbox load times are nearly twice that of the PC and I’m still trying to figure out what Saturation does in the options menu. 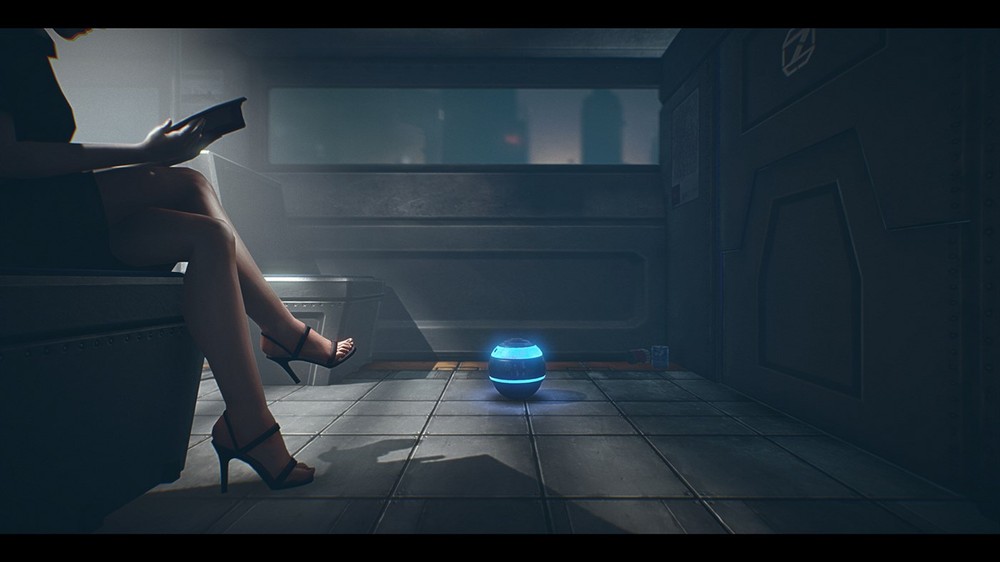 What is identical across both platforms is the amazing soundtrack by “Nobody’s Nail Machine” that was a perfect fit for the oppressive cyberpunk world I was exploring. The controls for the game are also identical including the same tendency for occasional glitches when steering the spark around certain areas of twisty cables. At least the Xbox version had better control prompts so you know what buttons to hit and when.

As of this review 7th Sector is available on PC/Steam for $13 and releasing today on Xbox One for $20. If you have a capable PC then that is clearly the way to go. You’ll have faster loads and better graphics and save some money. The Xbox version looks like a basic port with no X-enhancements for 4K or HDR. The game still plays and looks great on the Xbox, but it’s a little rougher (literally) around the edges. No matter which version you play prepare for an immersive deep dive into one of the coolest cyberpunk adventures of this generation, full of amazing world design and brain-melting puzzles. 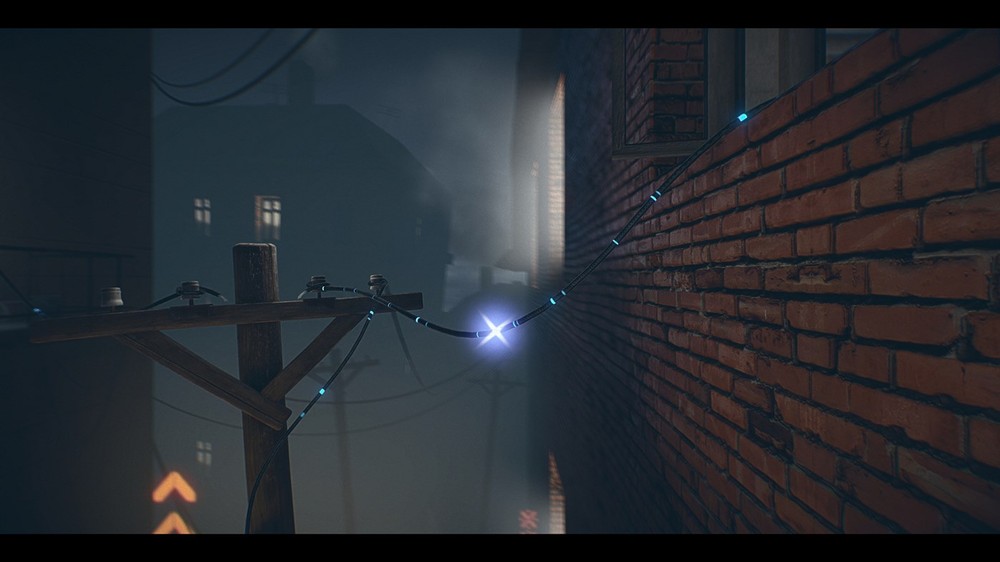 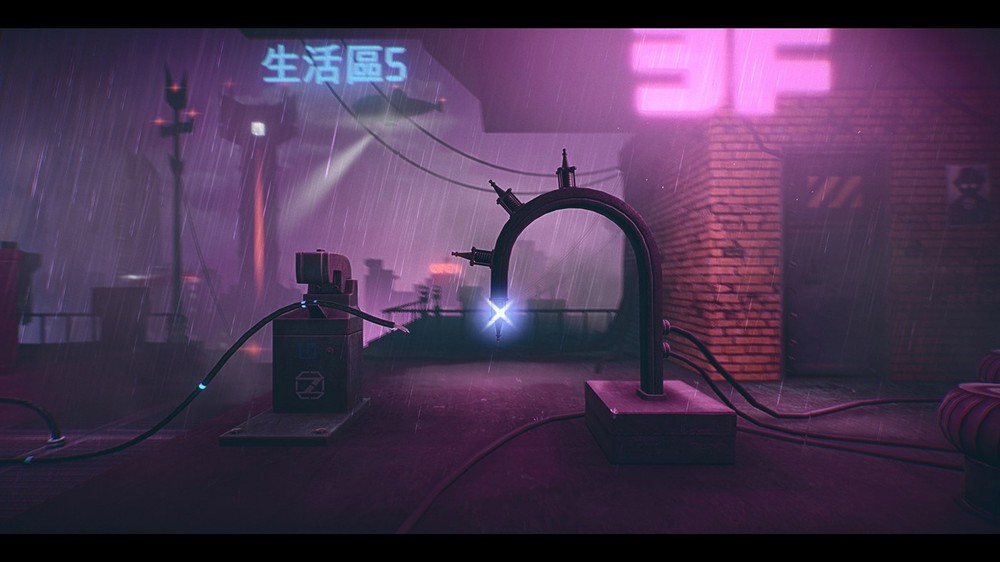 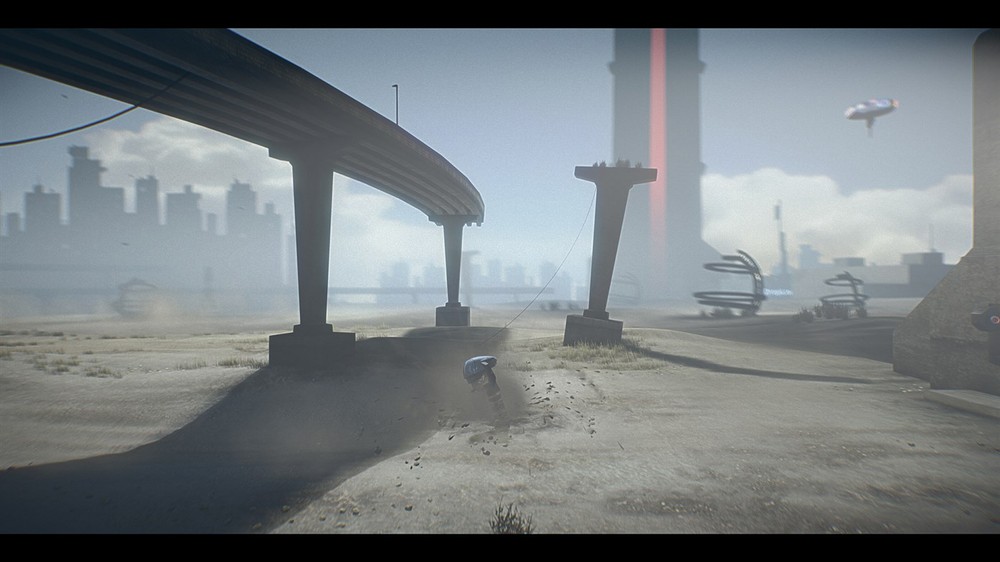 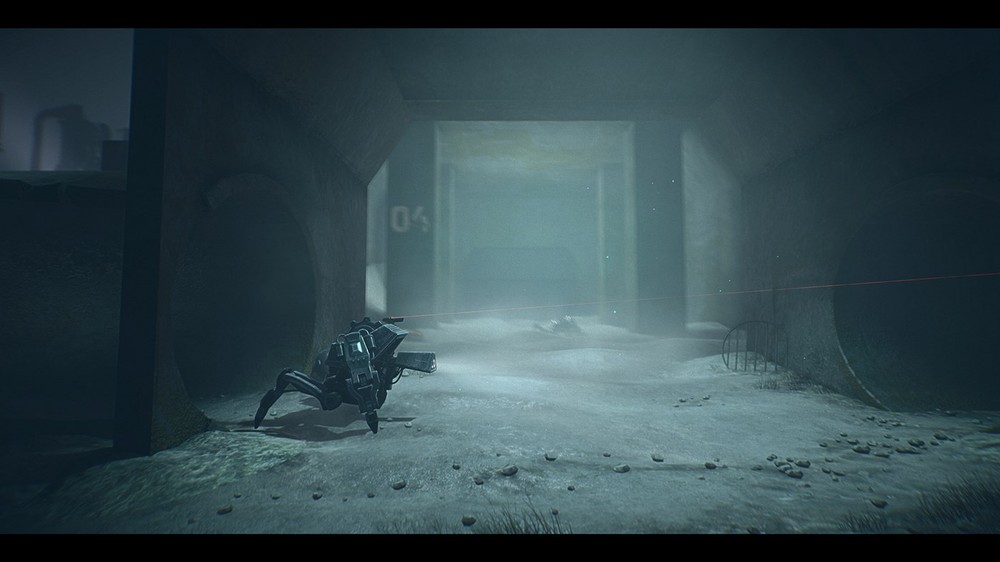 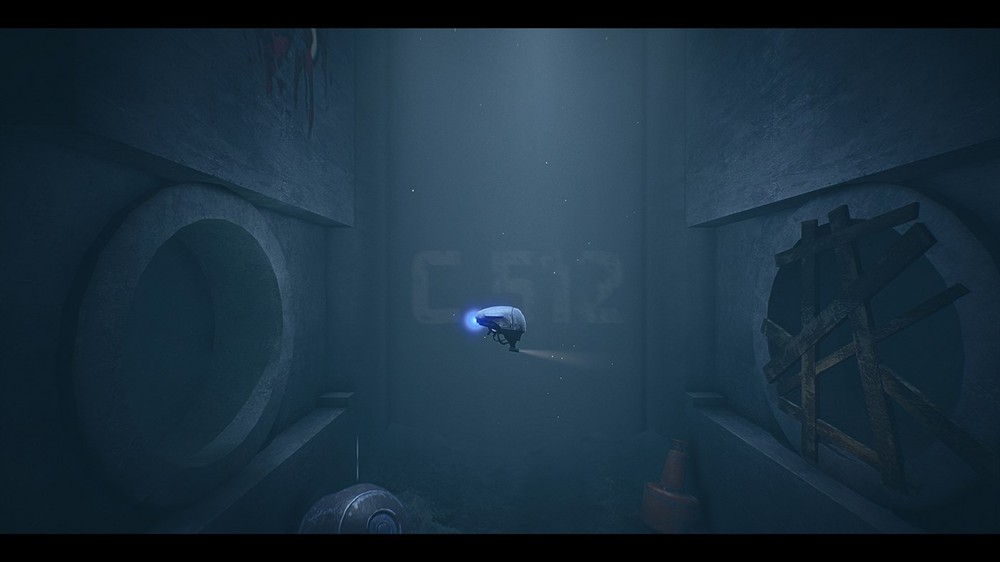 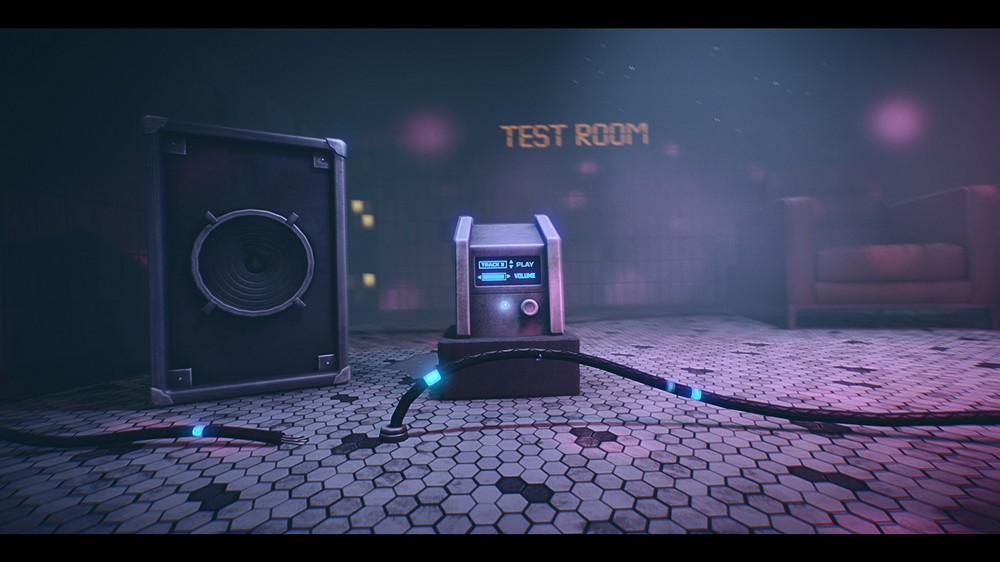