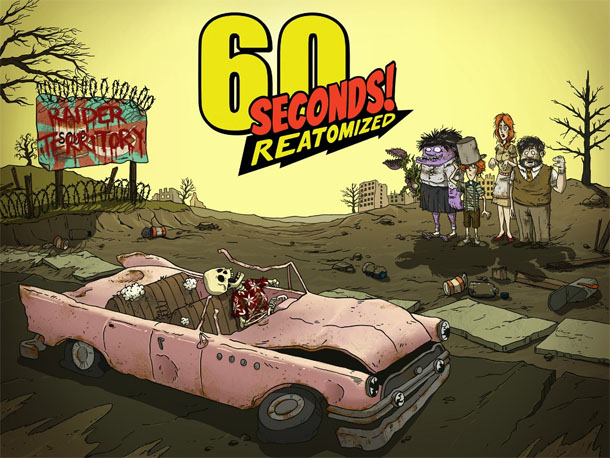 - Never really feels exciting
- Not much to do

An enjoyable and stressful, distraction.

I’ve always enjoyed choose-your-own-adventure stories due to the fact that while they have an established structure, you’re able to choose which branch you wish you take, giving you the sensation of having some control over where the story is going. In truth it’s all been predetermined, and the ending of each story has already been laid out long before you’ve even opened the cover for the first time. 60 Seconds! Reatomized goes a step further by allowing the player to set themselves up for success before starting the story by collecting supplies, extra characters and even weapons to give them the best chance of choosing optimal outcomes before plunging them into a bunker and asking them to outlive the apocalypse. 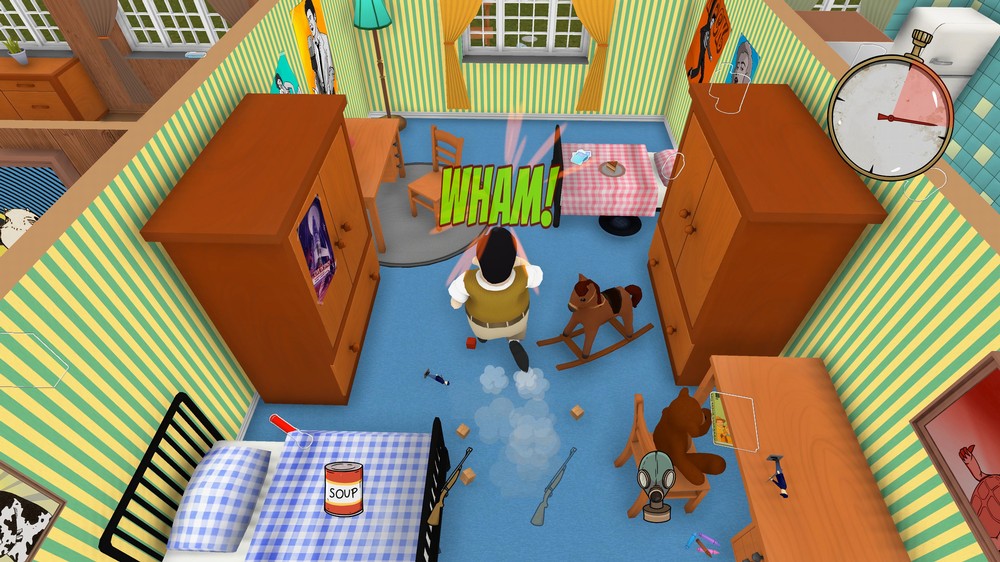 There are two main sides to 60 Seconds! Reatomized: the mad dash for supplies (which is where the 60 seconds comes from) and the long, slow struggle to survive that comes once the bombs have dropped. These two segments feel distinct as well, with the first coming as a 3D-modelled rampage around a house, picking up items and people and transporting them to a bunker, and the second playing out more like a storybook, with a 2D illustration of the survivors and their supplies and text-based updates on developments from the previous day’s activities and the choices available to you in the present. You’ll likely be spending a lot more time in the second section than the first, although there are options to solely play either part, with challenges based around each awarding new visual designs for items and characters if successfully completed.

Once you’re in the bunker, you’ll be responsible for managing the hunger, thirst and sanity of the occupants, as well as dictating if and when they’ll be venturing out to look for supplies. There’s also a relatively large pool of seemingly random events for the game to draw from as well, such as a cat showing up at the door of the bunker, a group of wanderers moving in down the road or youths hammering on the door in the middle of the night. These often add a dash of humor to proceedings as there are typically mild references to pop culture within the stories, and I was surprised by how long some of these side stories last and some of the twists and turns that their narratives take. Quite of a few of them require the use of availability of a particular item to either activate or proceed, which is why it can be important to grab items other than just food or water during those initial 60 seconds. 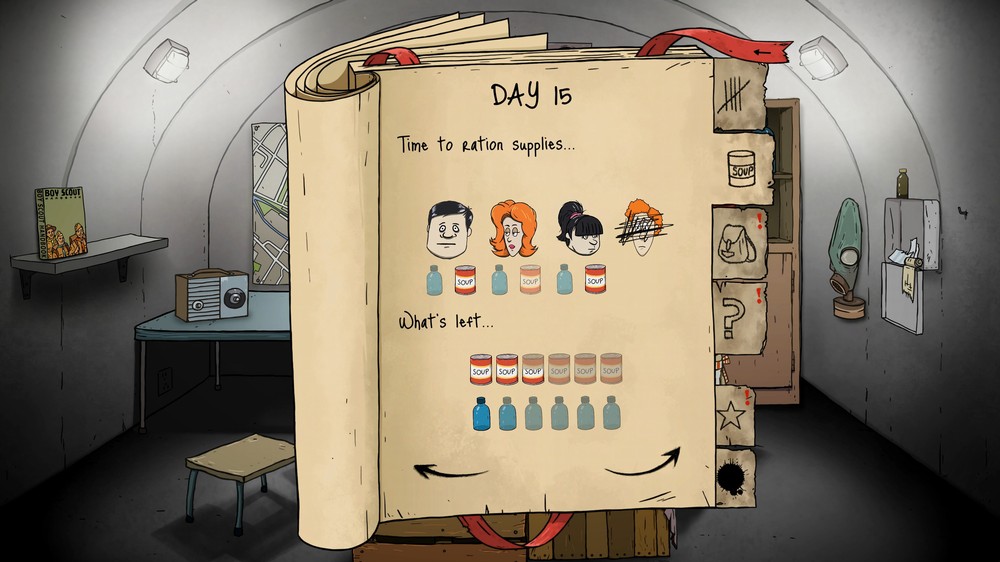 There’s an inherent risk/reward structure to 60 Seconds! Reatomized and it’s not always 100% clear just how dangerous a situation might be when it first arises. There are initial concerns such as whether to feed someone today or ask them to hold off until tomorrow, which can cause you to miss your chance should a story beat come up in the interim. There’s also the danger in letting someone leave the bunker for supplies: they might come back with food, water or a decent survival tool, but they also might not come back at all. This will save on food and water for the other survivors, but it also leaves you a person down when action needs to be taken. 60 Seconds! Reatomized is all about balancing priorities, and it can become surprisingly intense, especially if you start to take ownership over the family and begin to develop attachments.

A typical run-through of 60 Seconds! Reatomized will land around the 30-minute mark, depending on how long your family survives for and how long you take to agonize over some of the more challenging scenarios. There are certainly sections that you will breeze through as well, reading the updates and assigning food and water without needing to pay too much attention to what you’re being told. However, come the end of a session, you won’t necessarily be in a better position to succeed the next time through as you were before you started. Due to the randomized nature of both item placement and scenario selection, it’s not like subsequent playthroughs of 60 Seconds! Reatomized allow you to exercise skills that you learnt in prior attempts, as you might still be missing a particular item, or it may have already been required in a prior scenario. 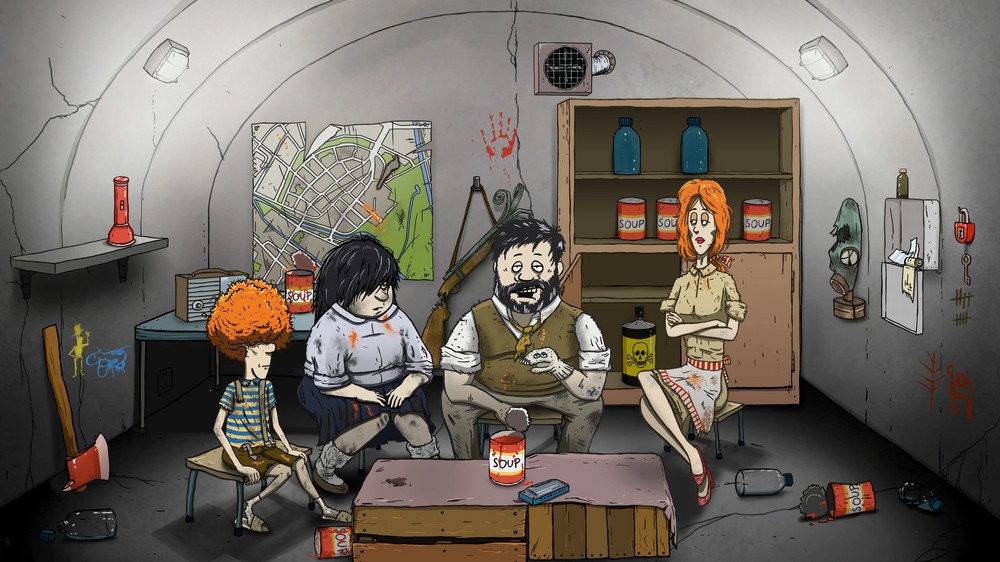 60 Seconds! Reatomized isn’t the kind of game that you’ll sit down with for an entire evening playing over and over, as each run-through feels like its own distinct experience. This is the kind of game that you’ll keep installed on your console to play through every now and then, running into new events and new challenges and seeing how well you do before putting it down again. There’s enough content here to keep that pattern of play up for quite some time, with the number and difficulty of challenges giving even the most experienced players a reason to return. I’m not sure if 60 Seconds! Reatomized ever really does enough for it to truly stick with me, however, but it was an enjoyable, if stressful, distraction each time I booted it up for another attempt at surviving a nuclear holocaust.