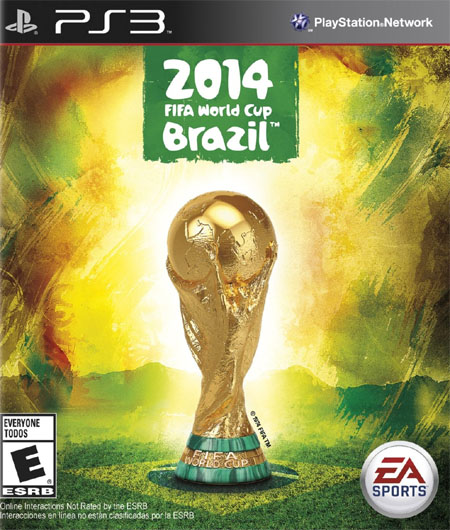 A few token improvements to core game, addition of a lot of national teams, some data imports from FIFA 14

Still no women's soccer, not really worth a standalone release at AAA pricing.

Every four years or so EA gets to really take advantage (i.e. hose gamers) with their FIFA license and release multiple $60 soccer games. Normally we see the annual FIFA release (clubs and select national teams), and the World Cup edition every 4 years (just national teams with World Cup graphics). Once in awhile we get fun titles like FIFA Street. It’s all well and good – they did pony up the dollars for the FIFA license after all, but $60 for what essentially amounts to updated teams is outrageous.

Don’t get me wrong, 2014 FIFA World Cup Brazil does have some new lively graphics specific to the World Cup, but at its core, it isn’t much more than a rebrand of FIFA 14.  EA does have the underlying game assets in place already – player face scans and various skill game modes etc. So there really isn’t a need to do a completely new game. Certainly they have come to the point where a $20 DLC is in order instead of this $60 disc.  Yet here we are.

To be fair, EA did include a few token improvements/changes to the FIFA 14 engine and assets – probably more to act as a beta test than to actually innovate.  The speed of the game has slightly improved. Their are real managers included – the announcers even talk about Bob Bradley with Egypt and you can see many of them in cutscenes. Generally the goalkeepers seem to be better as well as player movement. 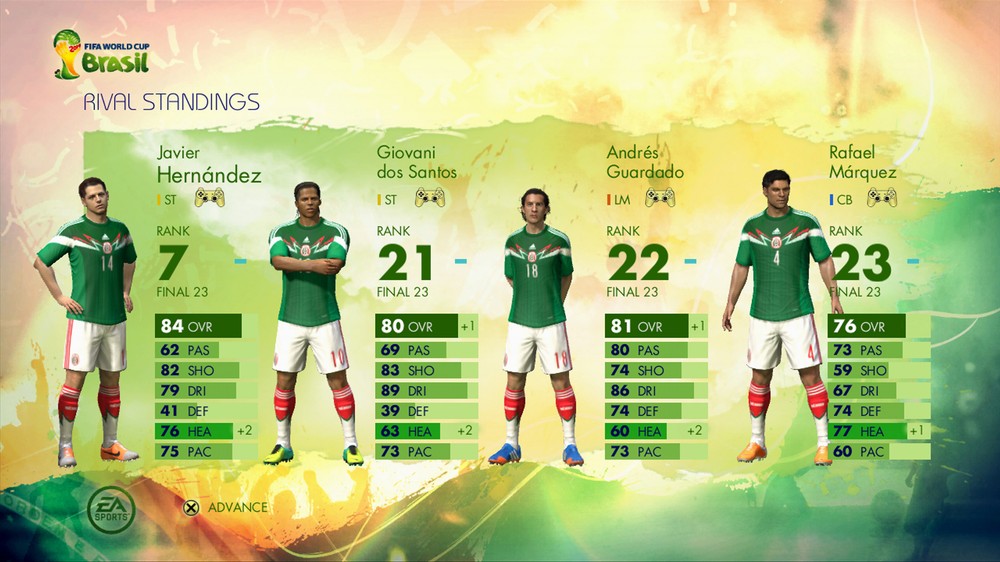 The only real plus for 2014 FIFA World Cup Brazil is the addition of a lot of national teams that barely have a country. Teams like St Lucia (population 173,000) is an island about the size of Charlotte, NC but with ¼ the population. But all these teams have a shot at qualifying for the World Cup. That’s what makes it great. Teams in the game are divided into their regional federations and this game includes: CONCACAF (35 teams), Europe (52 teams), Africa (48 teams), South America (10 teams), Asia (43 teams), Oceania (11 teams), and a bonus of 3 all-star teams.  In real life, 203 teams played to qualify for the final 32 spots. EA gives us almost every team.

Downloadable roster updates will be available as the World Cup gets closer – but those updates will only be available for those with active internet on their console.  The USA team is filled with 45 recognizable players you can pick for your final team and customize as needed. There are a few notable players missing such as Gooch (Oguchi Onyewu) currently with Sheffield Wednesday. It would have been fun to use them to second guess Jurgen Klinsmann’s choices but in reality Gooch’s chances of making the team this year are slim. 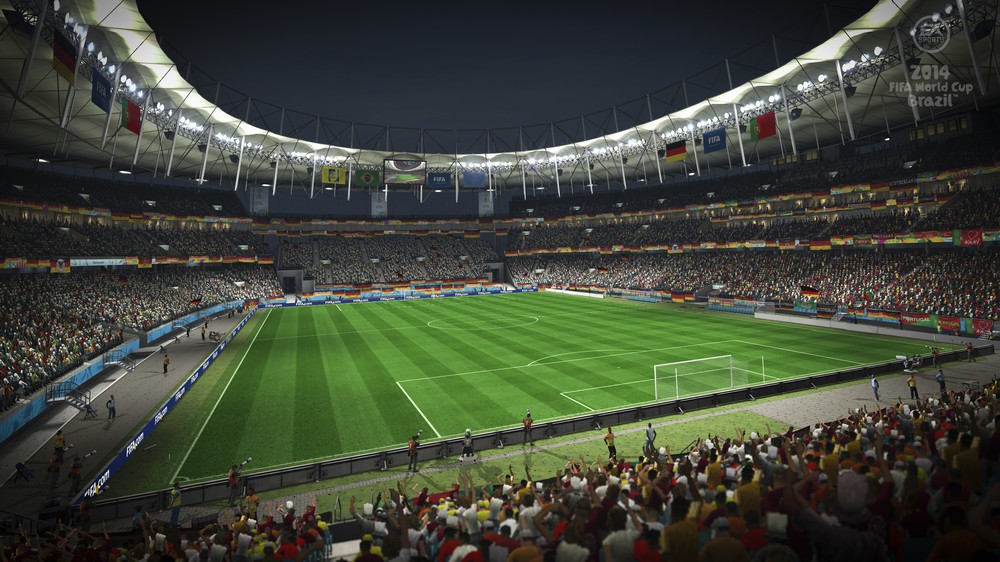 In 2014 FIFA World Cup Brazil you can play simple ‘friendly’ games where you pick any of the 200 included teams. You can also chose ‘story of qualifying’ from different scenarios from any of the 6 confederations trying to qualify for the World Cup – this includes the infamous March 22, 2013 USA vs Costa Rica game in Denver with several inches of snow on the ground.

“Captain your Country” let you create up to 4 players or pick an existing pro to try and make the national team. Unfortunately you can’t import your FIFA 14 be-a-pro player, but you can import your EA GameFace from their website.  This mode also allows you and 3 friends to play at once in ‘try out’ games to see if you can make the team. You are ranked as being ‘not safe’ as you begin but once you prove yourself on the field you can move up the ranks quickly.

You can also do the standard “Road to the FIFA World Cup” mode which puts you directly into the qualifying process.  Or you can go directly to the World Cup groups and start playing for the trophy.  There are also the normal FIFA 14 skill games with a few variations, and a “Story of the Finals” which won’t be active until the World Cup begins in June. 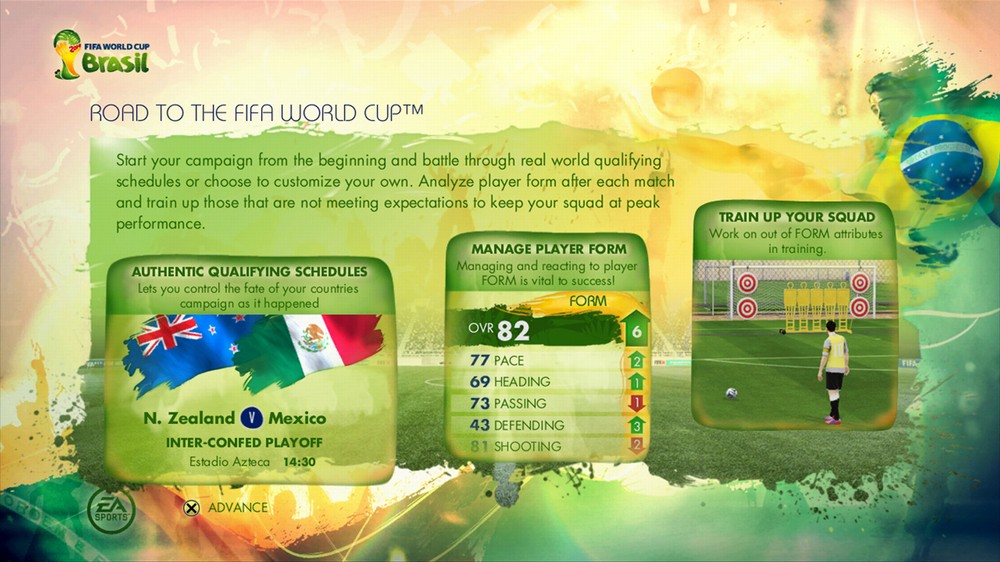 Online play is a pretty standard (and welcome) set of playing in the Online World Cup as well as friendlies and a mode where you can play your way through the 12 host stadiums.  The stadiums look amazing – though currently very inaccurate since most of them are still in various stages of construction.  It would have been hilarious to see protesters outside the stadiums instead of fans cheering.

Hidden away in the customize menu you can find the usual settings and downloadable roster updates and the new miCoach from Adidas.  It’s basically an Adidas ad where real players give coaching tips on playing soccer.

As with FIFA 14, there is EA Sports Football Club where you can use coins earned during play to buy upgrades to certain items. Thankfully your level imports from FIFA 14 so a lot of items are available right away. Otherwise you’ll have to play quite awhile to level up. Items vary from historic kits to goal celebrations to game cheats.

FIFA 14 is a great game. Arguably the best sports game out there. So EA was starting with a huge arsenal of good material. But with all its fancy World Cup specific graphics and stadiums, there are only slight improvements to FIFA World Cup over FIFA 14.  That said, it is fun to play different scenarios and rosters dreaming of seeing your team win the World Cup. But this $60 game has an extremely limited shelf life and certainly would have been better positioned as a $20 DLC. 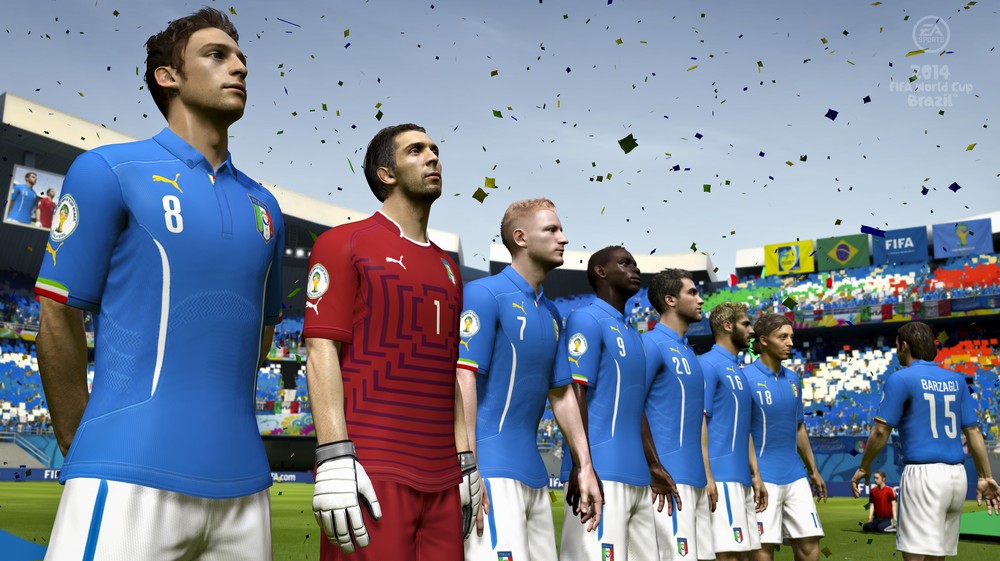 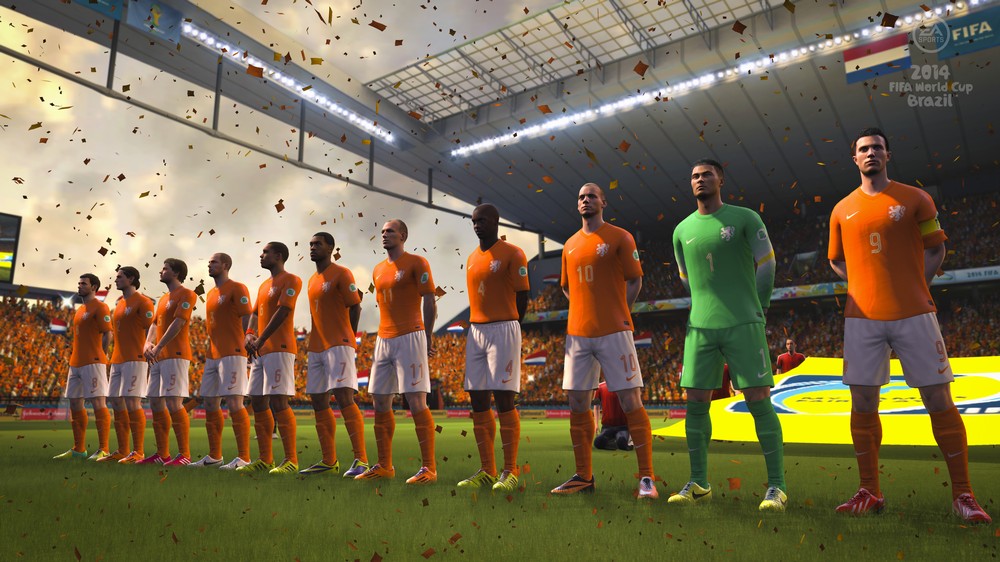 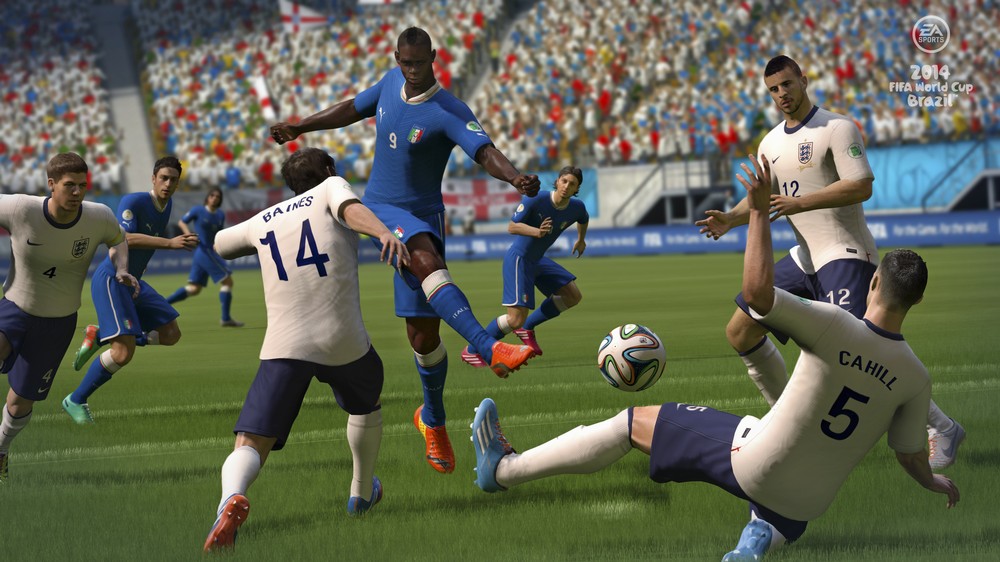 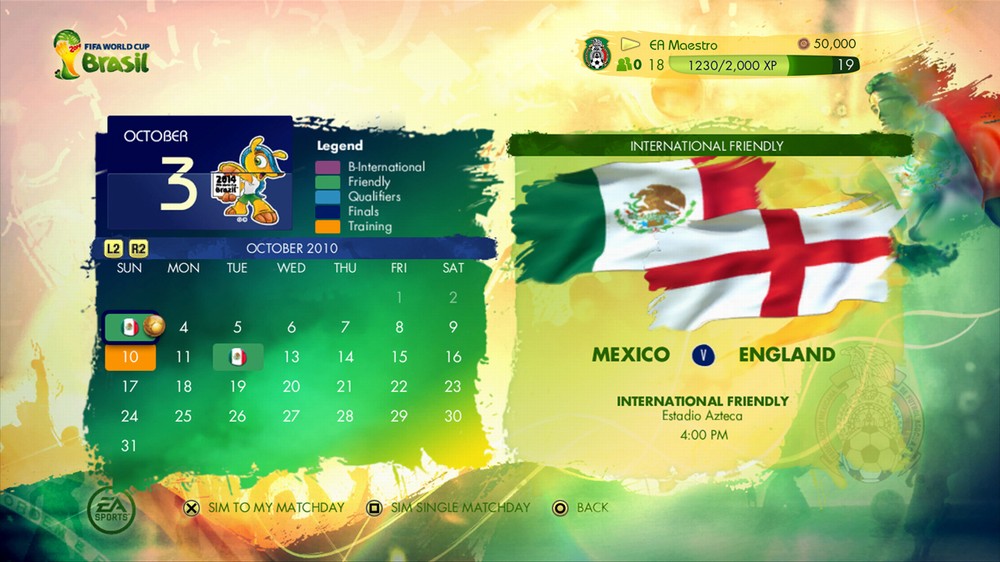 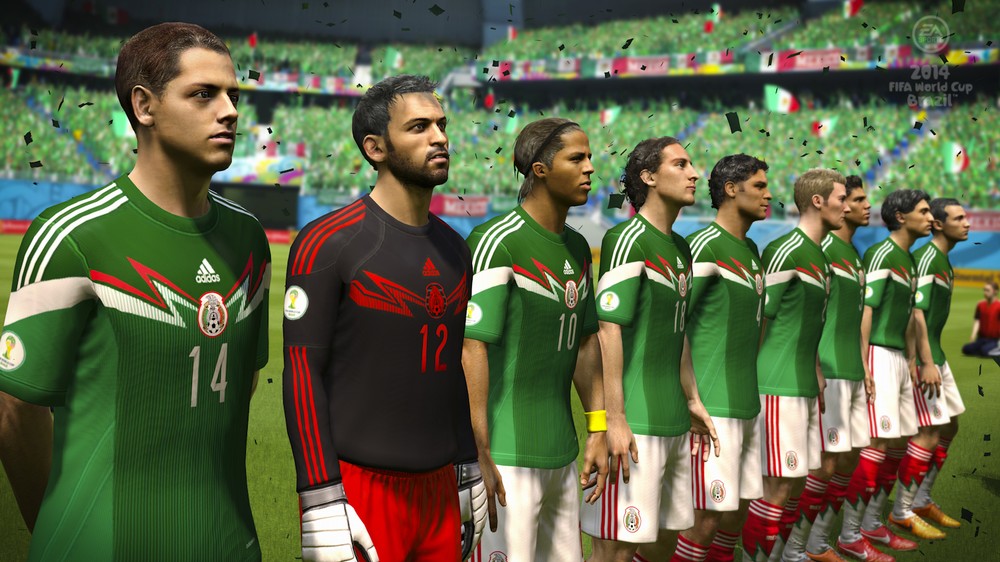 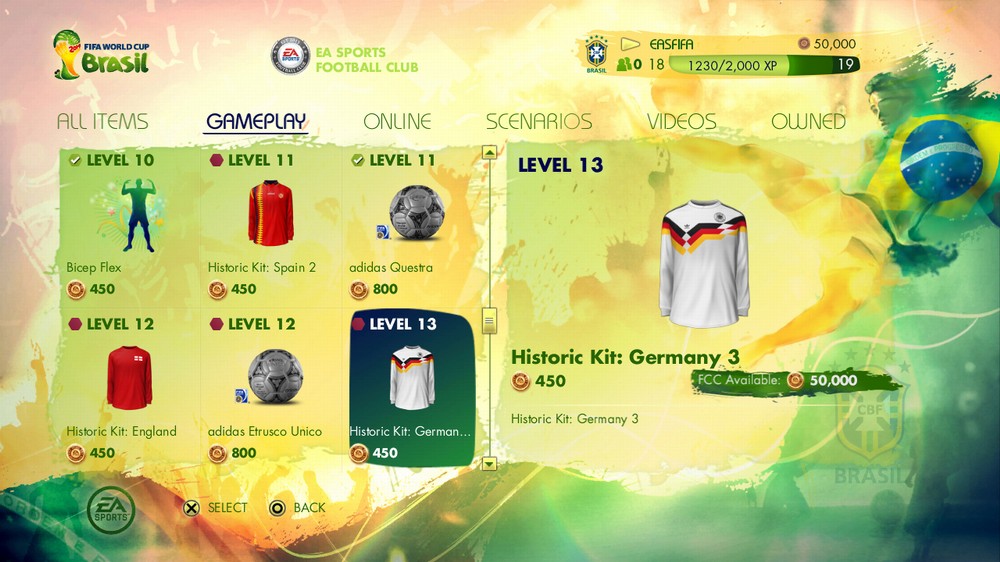 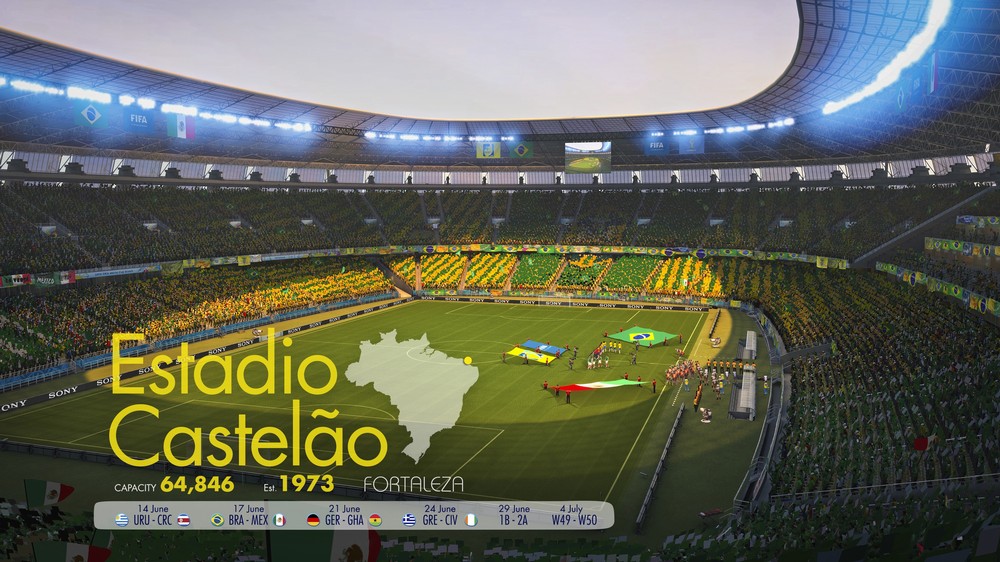 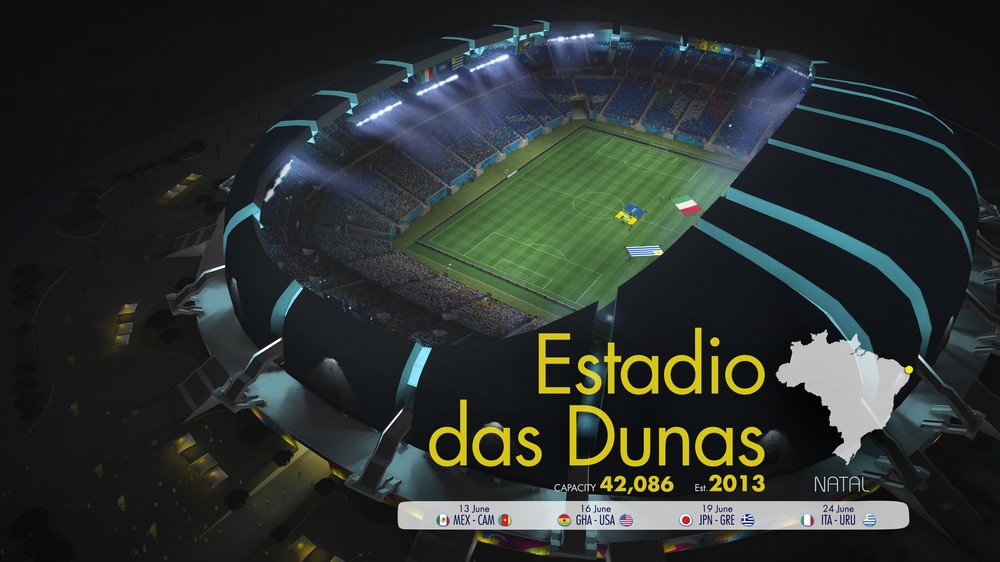 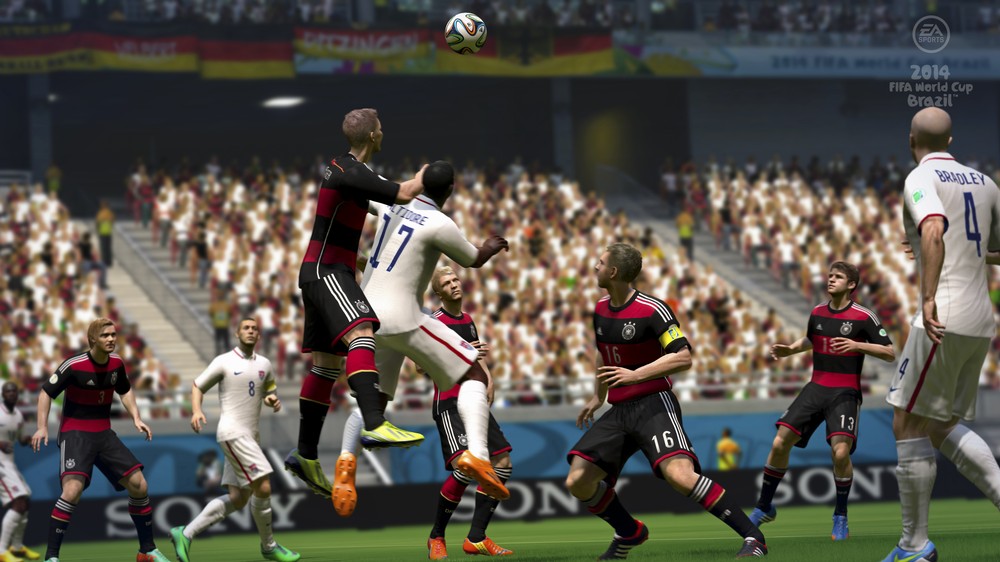 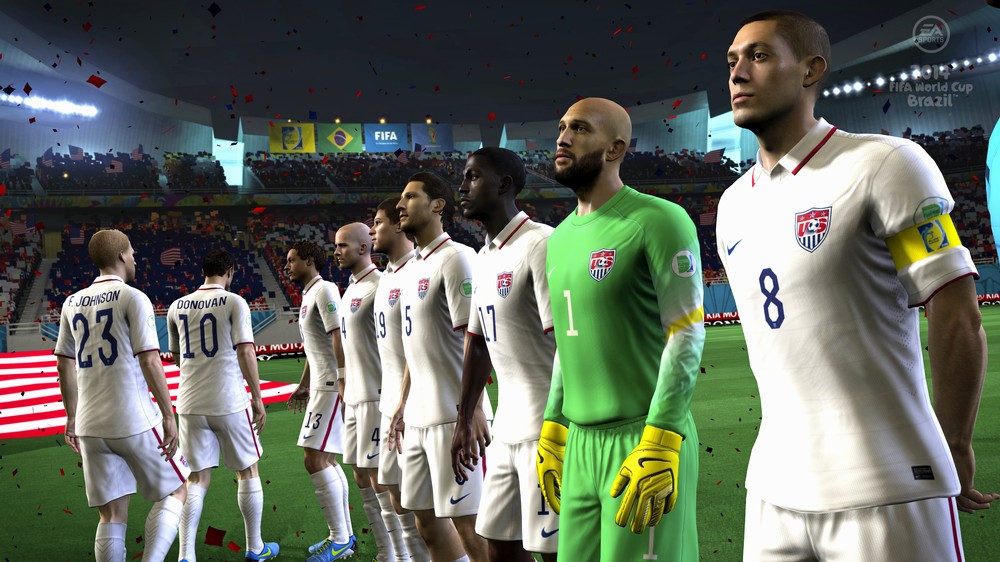 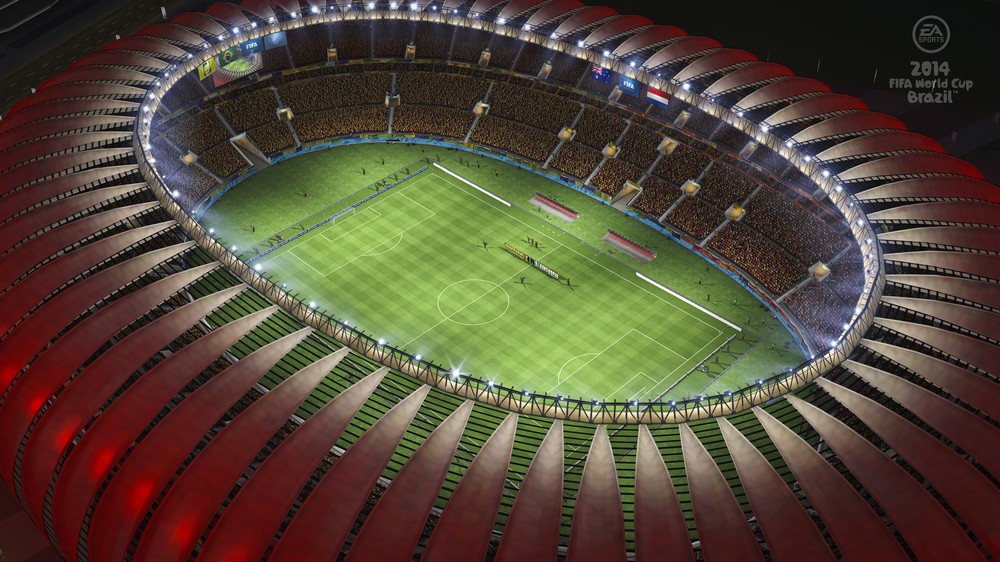 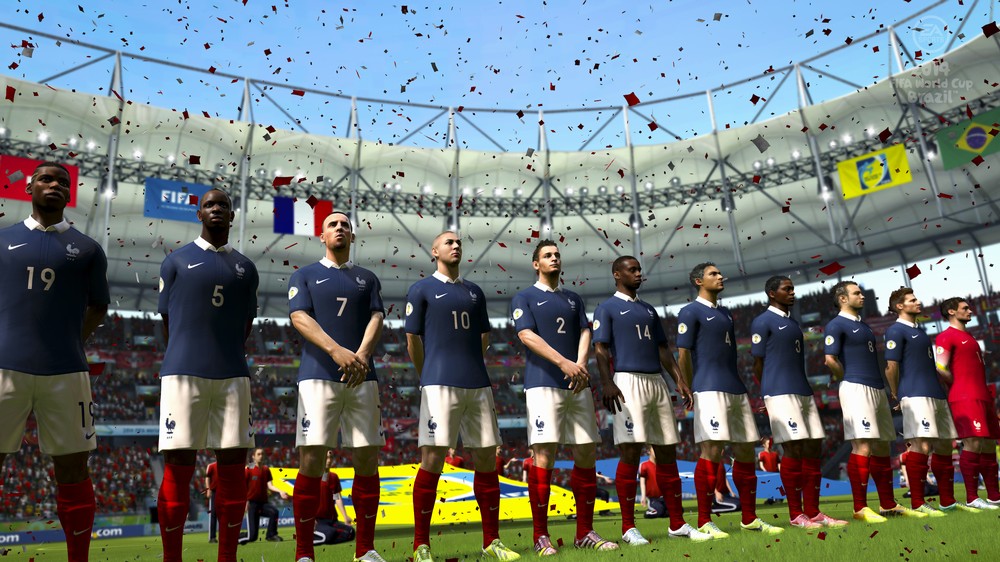 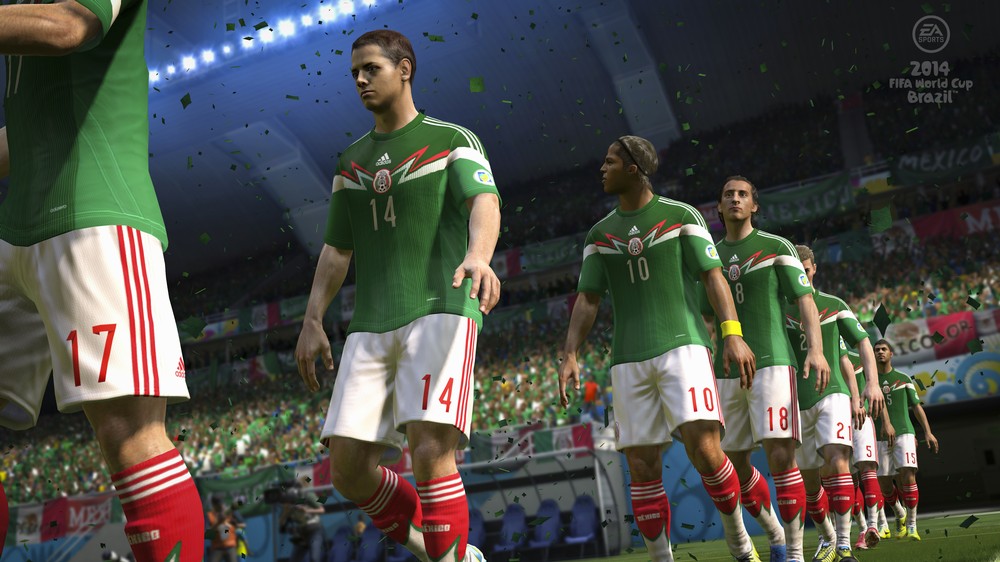 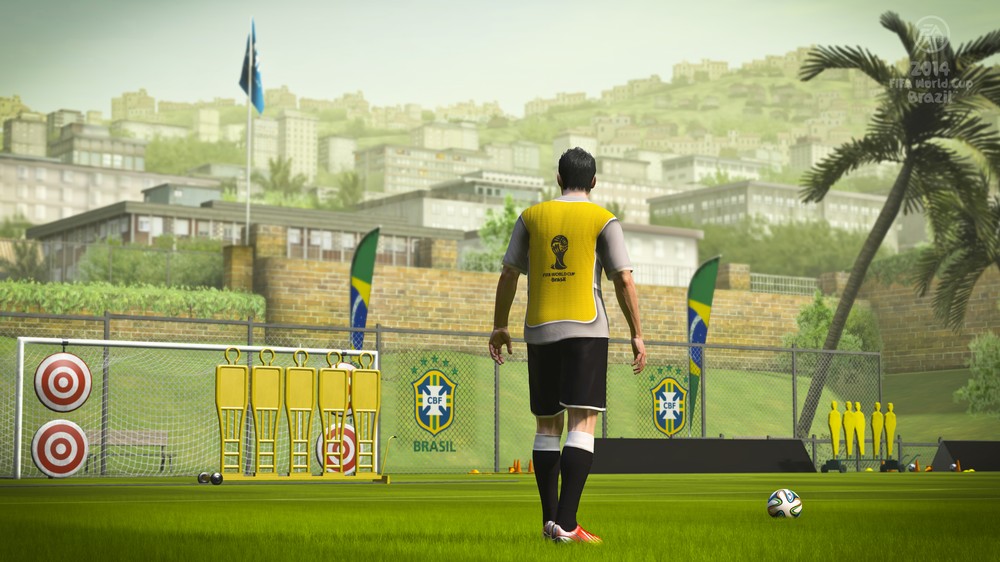 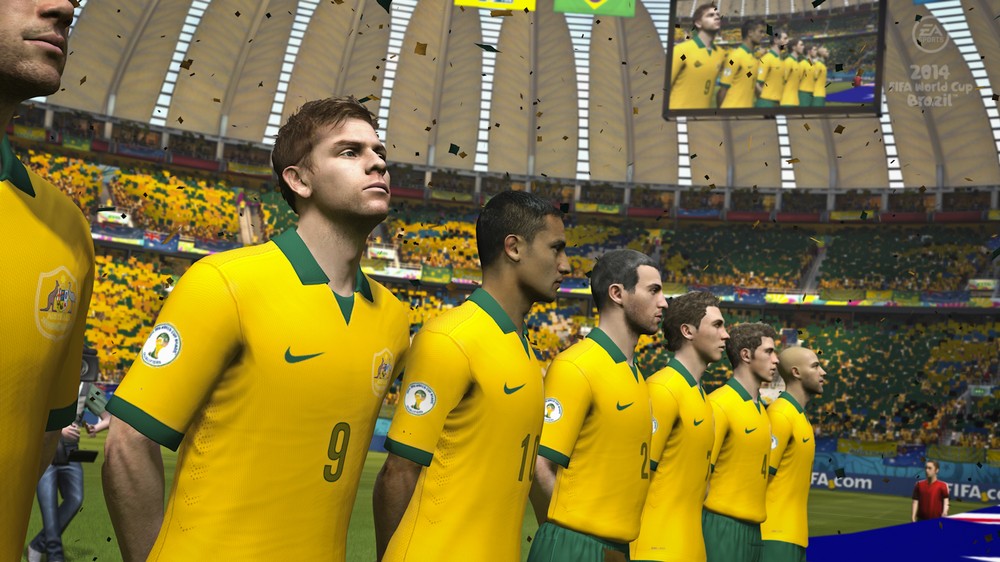 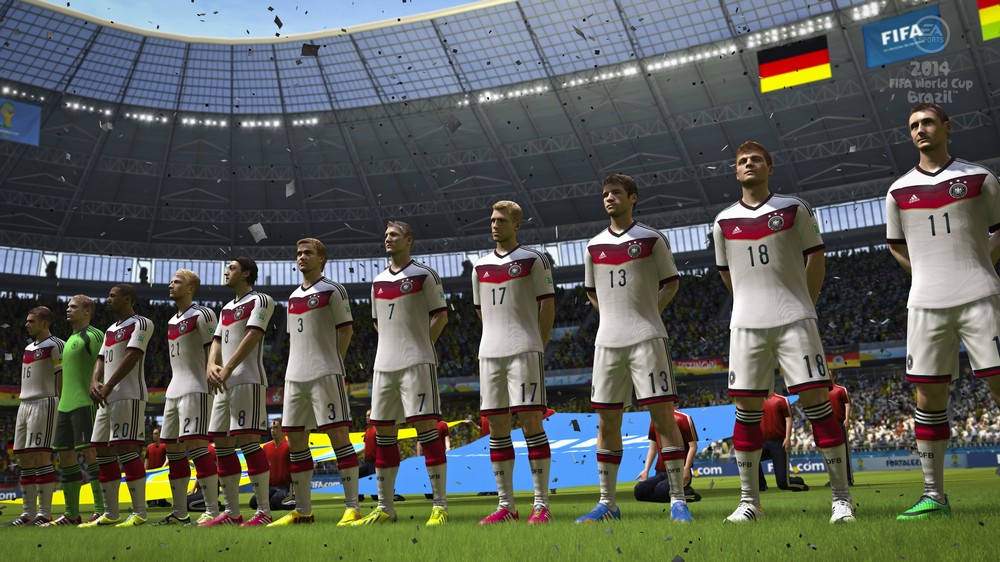 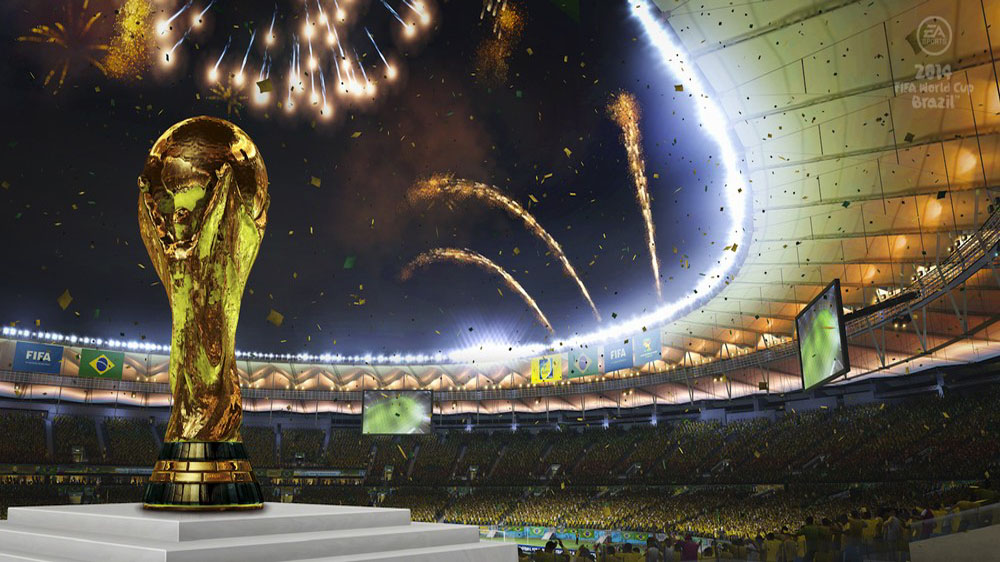