As the release dates for mega blockbusters Doom III and Half-Life 2 draw closer each month, promising endless blood drenched battles with zombies and alien mutants of all varieties, the real storm cloud brewing on the horizon has centered on the two giants of the videocard world, ATI and Nvidia. Many recall last year when ATI embarked upon a serious campaign to snatch the crown of dominance from industry heavyweight Nvidia by turbo charging their Radeon videocard series with the the 9000, 9200, 9600, 9700 and 9800 product line, competing with Nvidia frame by FPS frame. Taking a similar approach used by AMD when fighting chip giant Intel, ATI introduced competitive prices and outstanding gaming performance backed by a series of drivers (Catalyst) that actually worked this time around. What began as a modest effort to make inroads into the videocard market turned into an all out offensive as ATI experienced the ups and downs of duking it out with the reigning champs of the graphical gaming world.

ATI kicked off their offensive with a bid to win the hearts, minds and rendering engines of the software world’s biggest names. When John Carmack used a Radeon 9000 series card to demo Doom III at 2002’s E3, eschewing a specially cooled Geforce 4 titanium offered by Nvidia, word began buzzing about the potential of this up and comer. Since Doom was synonymous with power and the latest cutting edge performance, the implications of Carmack’s nod to ATI were clear: this company had game. The gauntlet was nearly on the floor, surely Nvidia wouldn’t take this lying down? As it turns out Nvidia didn’t have to do anything, at least not initially. ATI stumbled over itself.

Initially warming to a cozy relationship with ID software after 2002’s E3, ATI experienced the big chill last summer when a playable alpha leak of Doom III escaped onto the internet, and fingers began pointing inside ATI’s camp. ID was furious, and although Carmack calmly stated that the leak would “change the way we do business in the future,” what that really meant in vid-speak was that ATI was persona non grata, at least for the foreseeable release of Id’s latest and greatest titles. Public reaction was divided, but the warm public relations glow emanating from Nvidia’s Santa Barbara headquarters was bright and vibrant. Nvidia had its day and poured the champagne.

Stung by the loss of their “ace in the hole”, ATI turned back to the laboratory, focusing on squeezing every ounce of stock performance from their Radeon videocards, while still leaving generous amounts of wiggle room for enthusiasts and overclockers. ATI also took a cue from their competitor and started outsourcing the production of their flagship videocard, the Radeon 9800 Pro, to well known board manufacturers like Guillemot (Hercules), MSI, VisionTek and Crucial. Freed from exclusive in-house production and distribution constrictions, the 9800 card was now available to the buying public from a number of different vendors, each of whom offered different features, options and incentives to further increase sales.

ATI’s premiere product had at last come to the masses and their efforts did not go unrewarded. After slogging it out through benchmark test after benchmark test in the digital trenches against Nvidia’s line of Geforce FX cards, ATI scored a massive victory when their 9800 (and the 9700 against Nvidia’s midrange cards) outscored Nvidia’s Geforce FX 5800, a highly touted war-horse of a videocard whose disappointing performance torn open a wide gap in the high end market, large enough to give ATI the performance lead they needed to race to the finish line. At the time, the 5800 was Nvidia’s highest performer, and in the interim between the 5800’s retirement and the Geforce FX 5900 Ultra’s release ATI jumped into the power vacuum with the Radeon 9800, the fastest card available to gamers. Up until the 5900, Nvidia had no response to the Radeon 9800, and in those precious few months ATI took the performance lead.

The Politics of War

Indeed, the big story these past six months has been ATI’s continual gain upon Nvidia’s market share, as more and more gaming publications have declared their preference for ATI’s flagship videocard, the Radeon 9800 Pro over Nvidia’s Geforce FX 5900 Ultra. What brought the crisis to a head this fall however was the latest controversy surrounding the performance of Nvidia’s Geforce FX 5900 Ultra with Direct X 9 games, and more specifically, with Half-Life 2 and Doom 3.

Maximum PC published an article this fall, describing the situation. Apparently winning the war on the performance front was not enough for either side to declare victory or concede defeat. Nvidia’s massive market share has been a bulwark for the company, leaving both sides at a relative stale-mate, despite ATI’s massive gains in the performance sector. The answer? Escalation.

Enter the politics of propaganda.

To paraphrase Sun-Tsu, sometimes even the most formidable foe can be overcome by simply out psyching him. Taking this philosophy to heart, ATI established a contract with Valve Software to bundle their highly anticipated Half-Life 2 with the Radeon series (in fact, rumor has it that ATI had to outbid Nvidia by several million dollars in order to get the deal with Valve signed). Taking the propaganda war even one step further, Gabe Newell, Valve’s managing director, announced his concerns over the Geforce FX 5900’s ability to render Half-Life 2’s shaders (pixel speak for an enhanced graphical ability) at a level (24-bit to be precise) appropriate for Direct X 9 standards. The upshot of this being that Nvidia’s 5900 would run Half-Life 2 at barely playable speeds (around 30 FPS) while it’s lesser cards, the 5200 and 5600, wouldn’t run Half-Life 2 at playable speeds without major driver rewrites. Valve further criticized Nvidia’s hardware, saying that “the poor performance is due to unwieldy Nvidia hardware that doesn’t meet the Direct X 9 spec.”

The gauntlet was thrown down, and this time Nvidia did not hesitate to strike back.

If ATI was going to play rough with Half-Life 2, then Nvidia would shoot back with the other giant in the corner, Doom III. Reasserting themselves back into Id’s good graces after the leaked demo debacle with ATI, Nvidia and ID have been quietly but persistently furnishing popular gaming and PC enthusiast websites with controlled hardware that allows them to benchmark Doom III with Nvidia’s 5900 Ultra. The results, to say the least, have been impressive, with quite a few speed tests between the Radeon 9800 and Geforce FX 5900 leaving Nvidia as the clear choice for Doom III’s massively intricate graphics engine. Just like ATI and Half-Life 2 however, these benchmarks are being produced under extremely controlled standards, most likely favoring whichever company sponsors them. 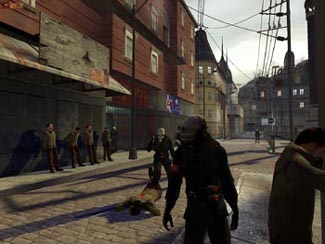 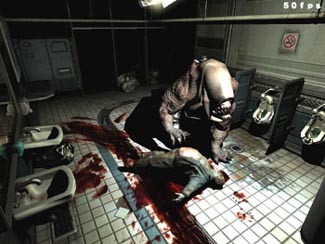 The end result of this digi-political mud-slinging has been confusion for many fans of Id’s and Valve’s masterpieces. Unsure of which video card will play their favorite games correctly, many have stated their intent to simply hold off any purchase until the games have been released and the shader/driver issues have been resolved. Both ATI and Nvidia however continue to fortify their positions in their respective camps-of-choice, ATI betting their bottom dollar on Gordon Freeman and Nvidia rooting for Doom’s inimitable Space Marine.

Another question that has gamers puzzled is the curious absence of Matrox, the johnny come lately to the world of video cards, whose Parhelia videocard – the first to offer triple monitor support for an intensely immersive gaming experience – shook up the stalemate between the two leading graphics contenders last year. In Part 2 of the Videocard Wars we’ll take a look at what Matrox has been up to and offer a continued look at Nvidia’s and ATI’s latest and greatest.