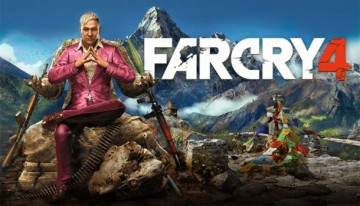 Today, Ubisoft® announced that Far Cry® 4, the much-anticipated sequel to the #1 rated shooter of 2012,* is now available for all major platforms and Windows PC.

Far Cry 4 is set in Kyrat, a breathtaking and perilous region of the Himalayas. You are Ajay Ghale, a young man returning to his birthplace to fulfill his mother’s dying wish of having her ashes spread across her native land. Ajay’s journey returns him to a country now struggling under the regime of Pagan Min, a despotic and self-appointed King, who has polarized his country and torn it apart with civil war. Finding himself thrust into the country’s conflicts, Ajay must make choices that will shape his fate in the ever-changing landscape of Kyrat.

Guns for Hire, the co-op game mode, lets people join their friends to fight together and explore the open-world of Kyrat. The world is populated with vehicles, animals, enemies and allies, all of which interact in different ways to allow players to choose their own strategies and shape their experiences. Liberate outposts, dominate the landscape and create unique, one-of-a-kind stories in the living and breathing world.

Competitive multiplayer matches are round-based, pitting the forces of the rebel Golden Path against the mythical warriors of the Rakshasa. Each side has their own unique set of weapons and skills that give them an advantage and players will adapt to the strengths and weaknesses of each faction in order to succeed.

Additionally, two Far Cry Apps, Far Cry® 4 Arena Master, the official Far Cry app, and Far Cry® Arcade Poker, are now available for download today on the App Store and Google Play. Playable as a companion app to Far Cry 4 or a stand-alone game, Far Cry Arena Master lets players step into the role of an arena master. You’ll prove your combat prowess and fight for fame and fortune in Noore’s Arena. You’ll earn the respect of roaring crowds and test your will to survive, battling man and beast alike, until only one contestant remains standing. The Arena Master Companion App on mobile devices allows the player to explore the open-world, collect animals or mercenaries to send them to battle against other players on the console or PC version of the game. The player can share progress and send custom Far Cry 4 arena challenges to friends from just about anywhere with an Internet connection with and iOS or Android device. In Far Cry Arcade Poker score the best poker hand in this cross between a puzzle game and poker game to send in-game rewards directly to your Far Cry game.