Los Angeles – 4 pm. Few things are more fearsome than the daily freeway traffic of Los Angeles’s own 405 freeway. Like the River Styx it stands as a seemingly impenetrable barrier separating the domain of the dead from the world of the living, and for those who must cross its forbidding trails on their daily commute to and from work, the freeway offers numerous obstacles. The blazing sun overhead, smog pervading the air everywhere, horns blasting, cars crowding, the screech of brakes and the sudden, yet seemingly inevitable flash of a middle digit held proudly in the air, all these things and more were my trevails to share as I slowly inched my way up the 405 freeway to Universal Studio’s City Walk for the premiere of Tom Clancy’s Splinter Cell: Pandora Tomorrow on Xbox.

Both myself and Henry Kim, GCM’s newest reviewer, looked forward to the event with some anticipation, and despite the cacophony of horns, engines and a mysterious wrong turn that led us deep into the entrails of the McDonald’s in Calabasas we were eager to get a glimpse of Ubisoft’s latest and greatest installment in the Tom Clancy Splinter Cell series.

For those in the dark, Splinter Cell chronicles the adventures of covert operative Sam Fisher, an agent waging a one man war against an Indonesian terrorist network. The original Splinter Cell debuted to much critical success, reviewers applauded its intuitive and in-depth approach to tactical espionage and deep cover operations. This time around Ubisoft was hosting the premiere of the sequel, Pandora Tomorrow, at Loew’s Theater in the fabulous tourist destination of City Walk, a grand arcade of shops, restaurants and cafes adorning the entrance to Universal Studios.

Perhaps the god of traffic took pity upon us, for we were able to overcome the unholy gridlock of LA’s commute and soon arrived at the event. We were shown into the one of the theater halls and took a seat near the front, where players flown in from across the country were preparing to play their counterparts in New York via X-Box live in a live-broadcast multiplayer death-match featuring Pandora Tomorrow’s unique multiplayer gameplay.

The crowd that had gathered behind us was eager for action, and as the players prepared themselves for online combat the theater’s camera captured anxious and amused looks from spectators who had come to win prizes and see the game for themselves. With the hosting duties performed by a local DJ, the festivities were quickly underway and the crowd alternated between tense silence and jubilant cries of victory as the online competitors snuck, crawled, jumped and shot their way through the multiplayer levels.

As the competition heated up the temperature seemed to rise in the theater as fans yelled and cheered on the “LA Team” against their competitors in New York. In one particularly intense play, a spy snuck up behind a mercenary and – using the only lethal method of attack available to him – twisted the mercenary’s neck, breaking it and killing him instantly. This move elicited bloodthirsty roars of pleasure from the crowd, causing visions of the ancient Roman Coliseum and all of its bloody spectacles to reemerge in my memory. From that point on, whenever a spy came within close proximity of a mercenary, the crowd would rise like an undulating snake poised to strike with vehement shouts of “Kill him! Get him! Break…his…Neck!!”

Though such spectacles do little to reassure one of the gentle graces of the American masses, it was indeed fun to watch the competition, cheer for our side and even more fun to witness the LA team win most of the matches, coming out the eventual victor.

From what I’ve seen of Pandora Tomorrow, fans can expect more of the same stealth action they’ve come to love with the original Splinter Cell, with quite a few enhancements in place, most particularly in the multiplayer offering. Graphics, sound, presentation style – it’s all there and then some, reminding me of how closely many AAA titles are mimicking huge blockbuster movies these days. To watch the introductory movie for Pandora Tomorrow one can see the template for a dramatic story line paralleling todays headlines, mixed with an unmistakable Tom Clancy flair for modern warfare and politics.

Xbox Live also proved to be quite the star as well – the cross country connection proved flawless the entire time and the headsets looked comfy, allowing players to communicate with ease. Once again the viability and popularity of online console gaming came to the fore, reminding me that even primetime television programming is starting to experience a decrease in viewership in the face of increased competition from online video games.

After the event patrons were free to roam the theater lobby picking up gift bags, prizes and play Pandora Tomorrow on 42” Plasma Widescreen sets. Perhaps the most pleasant suprise of the evening however was the unexpected attendance of actors Billy Boyd and Dominic Monaghan, The Lord of the Ring Trilogy’s Pippin and Merry (“This my friend, is a pint.”). Henry, ever the repository of movie information, spotted Billy Boyd right away, and not only was he nice enough to sign autographs, but we also took our picture together! Both Billy and Dominic are known to be quite the gamers themselves, having just recently completed work with EA Games’ Lord of the Rings: The Return of the King game. Their presence there was yet another reminder of the deepening connections between Hollywood and the Video Games Industry, as individuals from both industries begin to merge and combine their talents, bringing about synergistic interactive products that are no longer just the result of game programmers, but of Hollywood’s most imaginative minds.

The evening ended with a delightful after-party at Tu-Tango Cafe where members of the press could wet their whistles and discuss first impressions of Pandora Tomorrow. Come March 27, gamers everywhere will be able to experience Tom Clancy’s Splinter Cell: Pandora Tomorrow for Xbox, with a PC version not far behind. If the rest of the game is anything like the multiplayer component we witnessed then video game fans everywhere are in for a big treat. 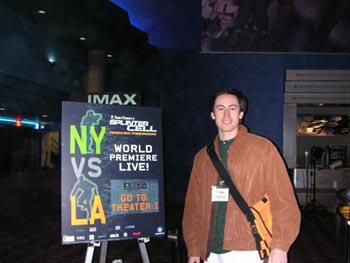 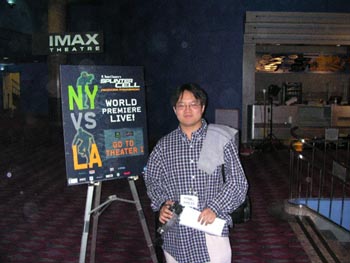 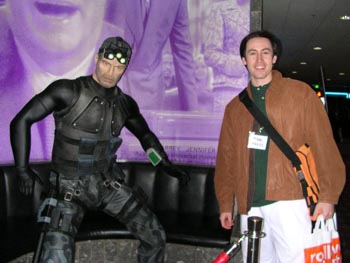 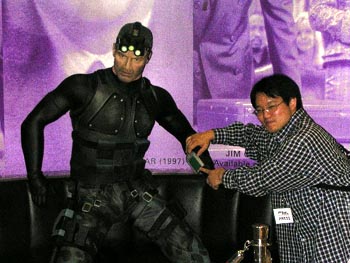 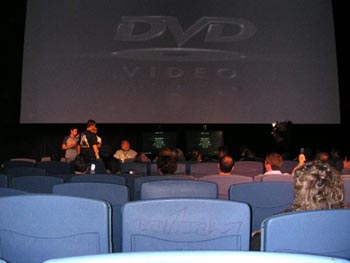 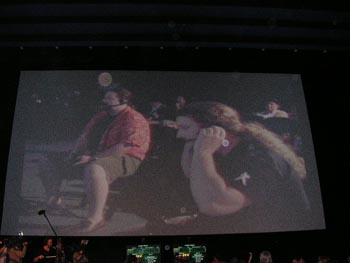 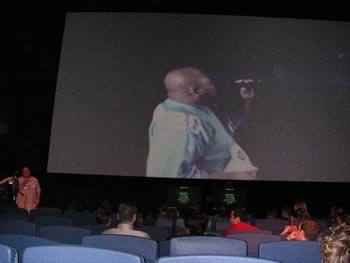 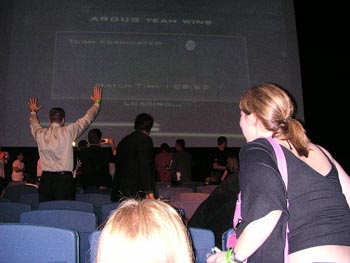 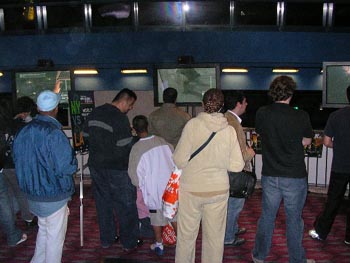 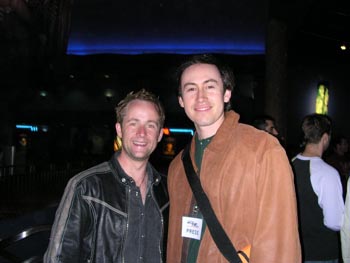