‘The Walking Dead: The Telltale Series – A New Frontier’ Reaches Season Finale on May 30 — Catch Up Now! 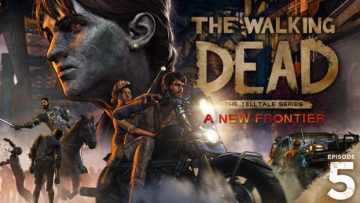 Today we can share the official release date for the critically-acclaimed The Walking Dead: The Telltale Series – A New Frontier’s upcoming Episode 5: ‘From the Gallows.’

Beginning Tuesday, May 30th, players can download Episode 5: ‘From the Gallows’ on PlayStation 4, Xbox One, PC/Steam, iOS, and Android-based devices. The episode will also download for all users of the special Season Pass disc for consoles, which includes the critically acclaimed two-part premiere episode and grants access to all subsequent episodes in the five-episode season for download as they become available.

Episode description: In Telltale’s most tailored episode to date, Richmond teeters on the brink of collapse as chaos reigns from all directions. The lives of its citizens and all those closest to Javier hang in the balance. The decisions you’ve made and bonds you’ve nurtured across the season will determine which characters now trust Javi to safeguard all they hold dear as the crisis pushes every relationship past its breaking point…

Episode 5: ‘From the Gallows’ is rated ‘M’ (Mature) for Blood and Gore, Intense Violence, and Strong Language by the ESRB. Future content in the season is yet to be rated.