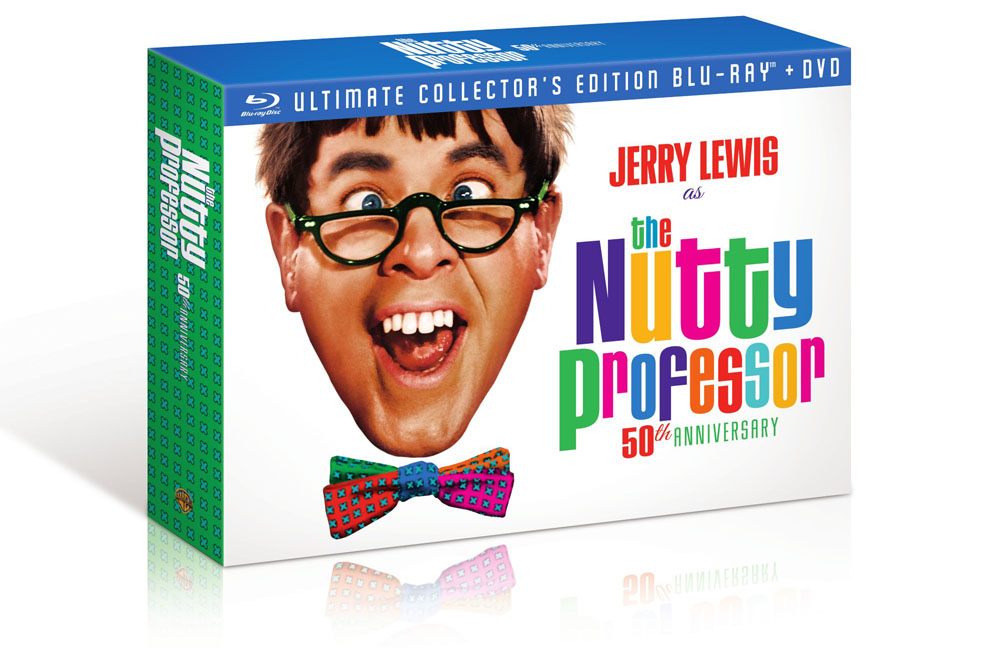 The Nutty Professor, one of Jerry Lewis’ most celebrated comedies, will be released on Blu-ray™ by Warner Bros. Home Entertainment (WBHE) June 3 in a brand-new 50th Anniversary Collector’s Edition. Lewis directed, stars in, and co-wrote (with Bill Richmond) the parody of the classic “Dr. Jekyll and Mr. Hyde” tale which was selected for the United States National Film Registry by the Library of Congress in 2004.

WBHE is releasing the four-disc Collector’s Edition with personal input from Mr. Lewis, who has helped compile lots of entertaining extra content for this release. Highlights include a new featurette, Jerry Lewis: No Apologies, an intimate look at “The King of Comedy”; a 48-page book of the film’s original story boards; a 44-page book of excerpts from Jerry’s cutting script with personal notes; and a recreated “Being a Person” book, written by Jerry exclusively for the film’s crew. Adding to the offering is the very funny CD collection, Phoney Phone Calls, 1959-1972, with private prank calls secretly recorded by Lewis during those years.

The Nutty Professor 50th Anniversary Collector’s Edition ($54.99 SRP) will include the film in DVD format as well as Blu-ray, along with DVDs of two other well-known Lewis comedies, Cinderfella and The Errand Boy. Also currently available from the Warner Archive Collection (www.warnerarchive.com) are Lewis’ films, Family Jewels, Cracking Up (aka Smorgasbord) and Which Way to the Front?

In a personal letter included with the new Blu-ray, Lewis notes, “[This] is a very special film with a lot of heart and soul. I thoroughly enjoyed the writing, directing, acting, editing, scoring and extensive promotion of the film. It is what I always dreamed of doing when I was growing up, watching Charlie Chaplin on the big screen.

“I am so happy to offer the unique elements of this collection for the first time, and I’m thankful to Warner Bros. and Paramount Pictures for the opportunity to collaborate on this great release of The Nutty Professor, my very special child.”

More About the Special Features:

Synopsis of The Nutty Professor 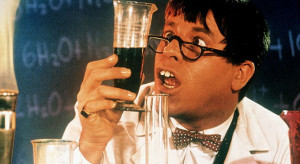 The title’s eponymous professor is Julius F. Kelp (Lewis), a shy, bumbling chemistry teacher who has a mad crush on his student Stella Purdy (Stella Stevens). When he tires of being made fun of, Kelp develops a magic potion that turns him into smooth and smarmy nightclub singer Buddy Love. Stella is drawn to Buddy but unfortunately, the potion’s formula is unstable and Buddy keeps slipping back into Julius at the most embarrassing moments. In the end the professor’s ploy is revealed, but not before he delivers a speech calling for everyone to learn to love themselves first before others can return the favor. Stella realizes she loves him for who he is and, needless to say, the ending is a happy one.

Consummate entertainer and world-renowned humanitarian, Jerry Lewis is a cultural icon in the U.S. and France. He is also the only entertainer ever to be nominated for a Nobel Peace Prize.

With worldwide box-office receipts in excess of $800 million (when most tickets were sold for 25-50 cents), Jerry was the top box-office star from 1952-56 with Dean Martin and from 1957-64 solo. Jerry’s groundbreaking brand of physical comedy has influenced generations 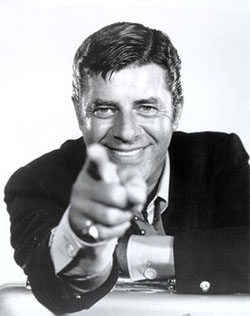 First on stage at age five, Jerry performed in Vaudeville alongside his parents and later began performing stand-up at the age of 15. His meteoric rise to fame began in 1946 at the age of 20, when he teamed with Dean Martin. “They were the biggest stars in the world as a comedy team,” said Billy Crystal about the duo, who caused Beatles-esque pandemonium wherever they went.

Jerry has appeared in more than 50 films, directed a dozen movies, had 13 television specials, three television series, an NBC radio show, recorded numerous records and albums; been the hero of a comic book series; authored four books (and been the subject of many more); and made thousands of other appearances on TV, stage (including a hit Broadway and tour run in Damn Yankees from 1994-97) and in nightclubs all over the world.

Additionally, Jerry Lewis was a major innovator in motion pictures. Director Francis Ford Coppola once noted, “Jerry’s invention of putting a video camera next to the motion picture camera (the Video Assist) so he could play it back and direct himself, has been used for decades by every director in the movie industry.”

Some of his other hit films include Who’s Minding the Store?, The Disorderly Orderly, The Patsy, The Ladies Man, The Bellboy, Visit to a Small Planet, The Geisha Boy, The Delicate Delinquent, and 16 Martin & Lewis films, 1949-1956.

Jerry has been honored with numerous awards including two stars on the Hollywood Walk of Fame; the Governor’s Award at the Emmy® Awards; a Career Achievement Award from the Los Angeles Film Critics Association; a Lifetime Achievement Award in Comedy at the American Comedy Awards and many more.

Enormously popular in Europe, particularly France, Jerry was awarded that country’s two most distinguished honors in 1984, making him a Commander in the Order of Arts and Letters and inducting him into the Legion of Honor by the Decree of President Francois Mitterrand. 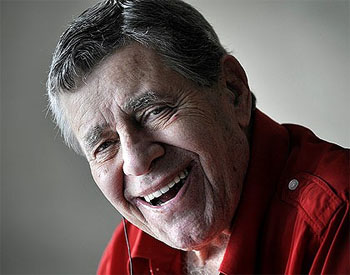 Jerry has long been a tireless and dedicated philanthropist. For more than 60 years, he has been the driving force behind the fight against muscular dystrophy. As national chairman of the Muscular Dystrophy Association, Jerry raised more than $2 billion for patient care and research and made the term “Jerry’s Kids” a part of the modern American lexicon. His creation, the MDA Labor Day Telethon, is the most successful fundraising program in the history of television and established a new benchmark in charitable giving.

Jerry has received numerous awards for his charitable endeavors, including: the Jean Hersholt Humanitarian Award (2009); the American Medical Association’s Lifetime Achievement Award (1996), the U.S. Defense Department’s highest civilian award; and the Medal for Distinguished Public Service (1985), among many others.

1
47
The Falconeer First-Look Preview – PC
2
43
Synth Riders Celebrates Anniversary with a Month Full of Treats and an Oculus Ques...
3
36
Metamorphosis is 33% Off on Steam!
4
36
Werewolf: The Apocalypse – Heart of the Forest launches on October the 13th
5
26
Worm Jazz Review – PC
6
21
Take to the Skies and Choose a Side in the New Trailer for Next Generation Air Com...
All Original Content on Game Chronicles is Copyright (c) 2002-2020
Sinjin Solves Walkthroughs Copyright (c) 1996-2020 by Mark Smith