Welcome to the premiere of the Mod Squad, Game Chronicles window to the wide open world of modifications, add-ons, conversions and other enhancements for your favorite games. Modifications, or mods as they are commonly referred to in the gaming community, are alterations of original software; reworked, enhanced or changed in some way for the express purpose of creating something new for other users to enjoy.

Mods have experienced tremendous growth since their original inception. What began in the early 1990’s as a fun way for fans to create their own maps and levels in early titles like the original Doom, has since evolved into a separate form of digital art, allowing amateur aficionados – programmers, mappers, modelers, digital artists, composers, writers – and even those with little computing knowledge to work together and enhance, altar or completely rebuild their favorite software games.

Originally conceived of as single person projects, such as with Justin Fisher’s elegantly addictive Alien’s Doom, modifications have since branched out to become multi-tiered projects involving large teams of people, many of whom never meet face-to-face, coordinating their efforts via email and the World Wide Web. Popular game series such as Doom, Quake, Half-Life and Unreal Tournament have spawned legions of modifications and add-ons. A lucky few gain enough popularity and attention to go retail, as with CounterStrike and Day of Defeat. Modifications aren’t limited to the FPS community however; some of the most inventive mods have come from other genre’s including Warcraft, Starcraft, Age of Empires and Age of Mythology.

Mods: whoever thought such a simple word could lead to such an endless variety of creativity, teamwork and innovation? Mods are what the Mod Squad is all about, and there’s a lot out there to explore and discover: from the original Quake Navy Seals weapons mod of yesteryear, to the Counterstrike’s and Day of Defeat’s of today, to the as yet to be realized Doom 3 and Half-Life 2 mods of tomorrow.

So let’s get started shall we?

Star Wars modifications have had a long a distinguished legacy in the world of gaming, and since the inception of the first Star Wars conversion for Doom nearly every major action game, including Quake, Quake II, Quake III, Half-Life, Unreal Tournament and more have had a Star Wars modification attached to it at one point in time. In former times, Star Wars modifications were so fast and loose that many were planned (and usually abandoned) even before the original software title that was to be modded was officially released. As of late, Lucasarts (along with companies such as Fox and Blizzard) have been aggressively protecting their copyrights, threatening legal action against would be modders. They’ve been so successful in this endeavor that quite a few mod teams have closed up shop even before their team members have had time to fully exchange email addresses.

Today we’re going to take a look at one of the premiere Star Wars modifications going on right now, UT 2003 Troopers, unique in that it has not only garnered a large following, but that among this following is Lucasarts itself, freeing UT2003 Troopers from the threat of forced closure, allowing fans and developers alike to breathe easier.

UT2003 Troopers takes an approach that incorporates a unique experience along with a tried and true gameplay premise. As the player, you’re plunged into the depths of the classic Star Wars Galactic Civil War that is raging between the Imperials and Rebel Alliance. What’s new here is your role, unprecedented in Star Wars mods until now: Troopers puts you right into the combat boots of a Rebel Alliance foot soldier or an Imperial storm trooper. That’s right folks; Jedi’s need not apply.

Following in the duality themed footsteps of Allies vs. Wermacht (DoD), Humans vs. Aliens (Avp 2) and Terrorists vs. Counter-Terrorists (Counter-Strike) Troopers gets down to the nitty gritty combat aspects of the Galactic Civil War, often overlooked for the glamorous Jedi Knights or dazzling X-Wing dogfights. From the swamps of Dagobah to the crumbling ruins of Yavin’s dense Jungles, Rebel soldiers and Imperial Stormtroopers vie for supremacy in a no-holds barred combat arena designed for multiple modes of gameplay.

If you’ve every played a first person shooter, or are familiar with the Unreal Tournament 2003 interface, then you’ll be right at home with UT2003 Troopers. The game utilizes several classic team play modes, including capture the flag, cleansweep and team deathmatch. In choosing your team you’ll be offered a nice selection of rebel and imperial skins, each slightly varied to suit your specific tastes, and each model with his own specific background and history. As your loading screen commences you’ll be able to read a little excerpt from the events of Rebel and Imperial troopers upon a background of professional proportions. Although I found the stories to be slightly incoherent, just the fact that an attempt was made to create this kind of atmosphere is quite laudable.

In my initial practice matches I found the bots to be quite adept. So much so in fact that after lowering the difficulty I played a few rounds of Quake III skirmish just to boost my ego again. As with other ‘versus’ games, you’ll begin the match with your teammates in a homebase area, from whence you’ll proceed to move out and engage your opponents. In doing so you’ll cover a lot of ground – the environments are large and expansive, utilizing the cutting edge UT2003 engine to its utmost. Both Rebels and Imperials alike swing their rag-doll physics with the best of them, as their bodies fly away from blaster bolts and laser fire.

I found the gameplay to be very fun and quite easy to adapt to, and the way the matches proceeded seemed orderly and cohesive, yet ultimately I felt hampered in some significant way. Perhaps it was the dearth of weapons (there are only two currently available, long rifles and rebel sidearms/imperial blasters) or perhaps it was the mildly weak firing system. Either way, the general ‘weak’ feeling of the weapons (most especially the long rifles) made me wish for something more robust, perhaps something with a greater rate of fire, faster target acquisition or just better line sighting in general.

There seemed to be a differential in time, a lag, before blaster bolts could reach their target, and I never quite felt comfortable with aiming. At times this was due to the frantic dodging of the bots, and whether this game becomes a bunny-hopping extravaganza, or a slower more ponderous Day of Defeat will be interesting to see. I should mention that the way the weapons were rendered and the way their blaster bolts looked was spot on – it was their in-game execution that I took exception to.

While playing you’ll find a plethora of in-game taunts specific to the Rebels and Imperials, all of which are appropriately rendered with FPS panache. Disappointing was the lack of online servers. As of this writing, I was only able to find one official server, and at no time was that server occupied with players. This was quite a shame to see, as the best path to development lay in active play testing by users. In addition to this gripe, I observed the expansive levels chugging (framerate-wise) at times, giving my P 1.3 GHz quite a run for its money.

So what about Graphics? Simply beautiful. Throughout the troopers experience you’ll find that polished presentation is a key ingredient of this highly professional looking mod. From the startup screen to the introduction sequence, UT2003 Troopers has the look and feel of a professional release. The levels are stunningly gorgeous, bringing such familiar Star Wars locales like Dagobah, Yavin and Endor to life with beautiful detail. Textures and lighting are equally as detailed. I’ll never forget walking into the main hallway of the Yavi (Jedi Academy) Temple and seeing streams of light filter in through columns, lighting up the entire interior in a warm glow. Weapons, models and environmental objects all looked realistic and completely Star-Wars-esque; you’ll never doubt for one moment that you’re playing a Star Wars Game.

The ambient soundtrack that comes with Troopers is composed of original scores, and truly enhances the feel of each level as well as that of the entire game experience. Thank goodness a Star Wars game has finally eschewed John Williams brilliant albeit overused Star Wars soundtrack. As a multiplayer modification UT2003 Troopers is still in development, and yet from the demo that I played, which consisted of only three maps, the replay value seemed quite vast, allowing for quite a bit of variation in team tactics and strategy. In it’s final format it is sure to offer the near-endless replayability of Counter-Strike, Day of Defeat and other ‘versus’ mods so popular today. 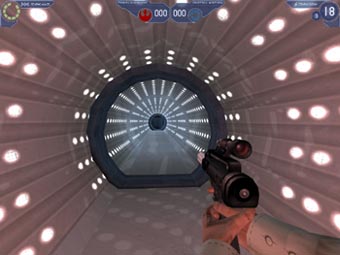 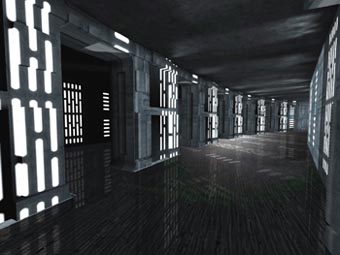 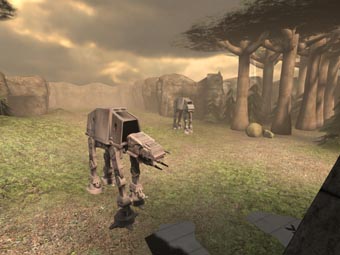 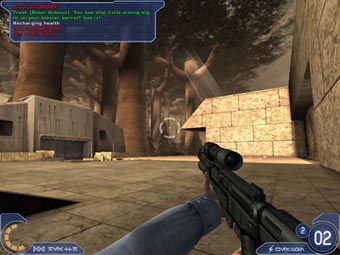 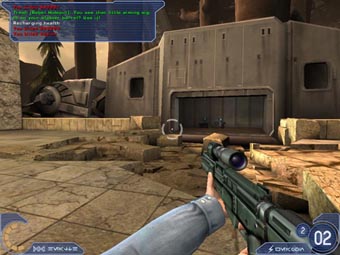 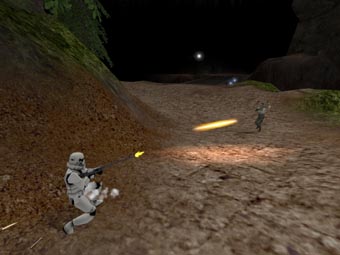 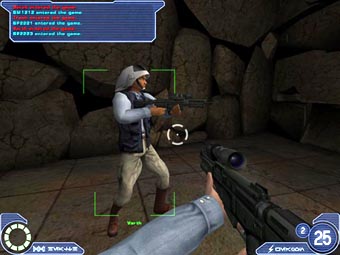 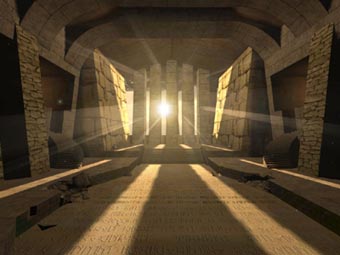 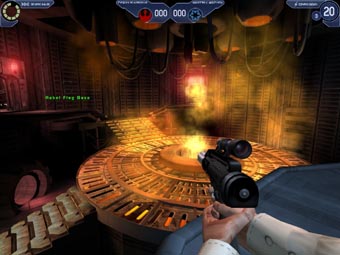 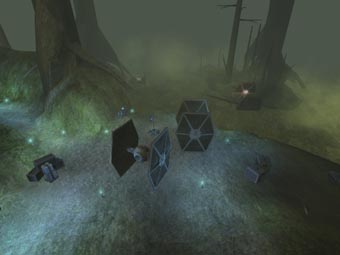 Kudos to the Troopers team for an impressive demo release. Pardon the overused term, but the Force is most definitely with this mod.